Like many others, European Art Classroom started off our week with Monday morning classes. Ours however lead us into town to our café. Being the Monday after Easter, which the French somehow manage to have off, most stores were closed or only open with very limited hours. 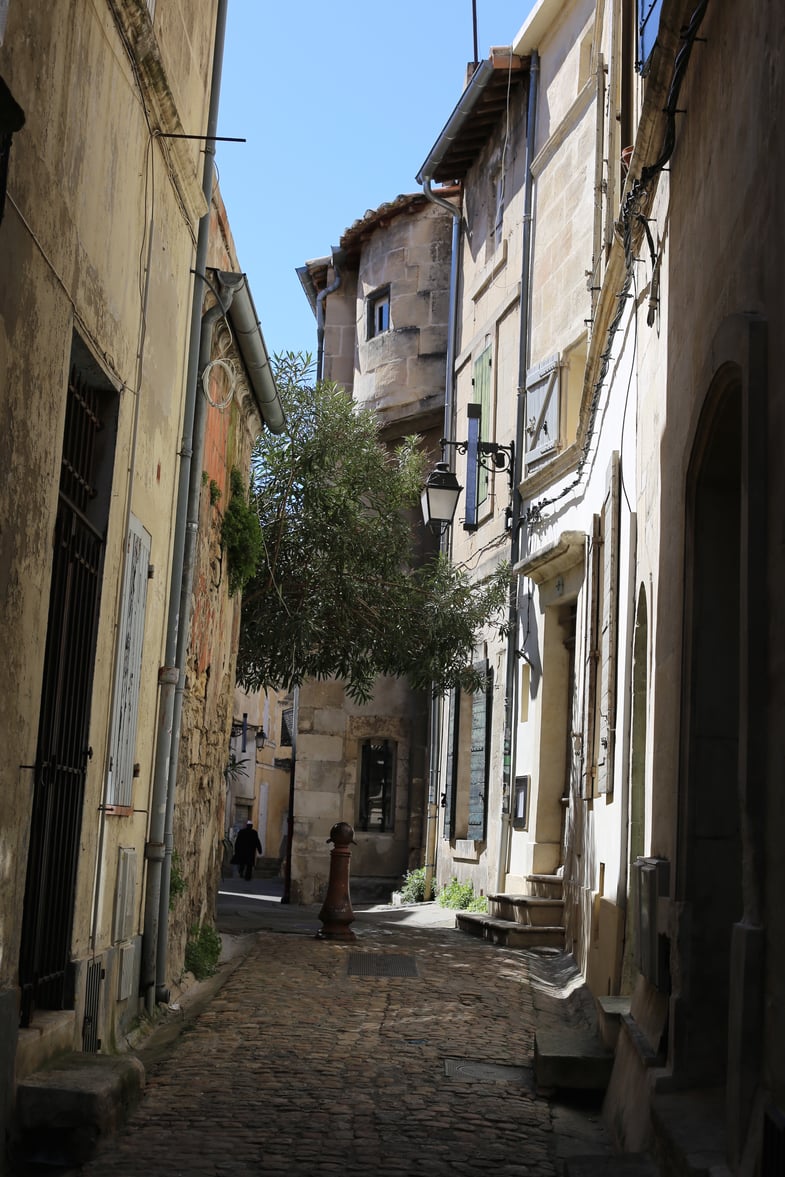 So instead of roaming the streets after our reading and writing assignments, Jen took all of us to a movie. Because of the obvious language barrier Jen chose for us to see the new Cinderella. With all of our abilities in French varying it was incredibly nice to watch a movie to which you already knew the story. Even though I probably only caught every sixth word it was surprisingly easy to follow. With our town time almost up after our movie we broke up into our groups of grocery shoppers and chefs.

As the shoppers were picked up in our car "Eddie," the chefs and the clean up crew began the wait for the town bus to take us home. As one would think, the French seem to run on their own time. Shops may be open only for three hours every day, lunch breaks seem to take up the majority of the day, and the bus never arrives on time. Because of this relaxed nature it was no surprise that the bus had still not arrived ten minutes past the pickup time. However, forty minutes later we began to worry. So we called Jen, and then waited for the next bus. But then that bus still had yet to come fifteen minutes after that estimated pick up time. After over an hour of standing and waiting for the bus that never came we began to walk; for, the grocery shoppers were already done and were ready to head home. Tired and bored we were surprised to be greeted by our van full of the rest of the group screaming to ask if we had seen the naked man. Extremely confused we raced into the car so that we could see what all the commotion was about. And sure enough, as we drove down the road on our right there was what seemed to be a college-aged man walking butt naked down the main street of Aix. And for those who are wondering, he was not scared or shameful of his being, he was without a doubt walking with confidence and in full stride. This my friends is how we started off our week. 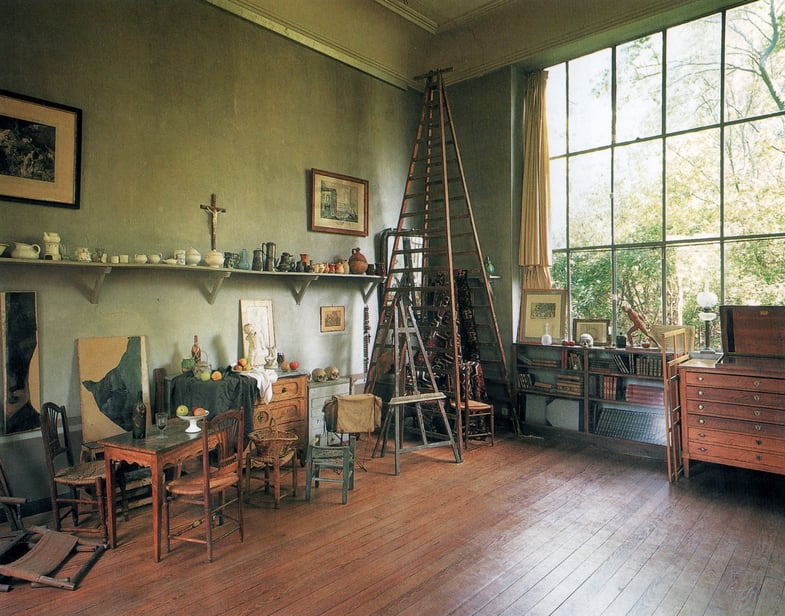 On our first excursion day of the week we had the privilege to visit Paul Cézanne’s art studio that was full of many items found in his still life paintings. After admiring our surroundings and the importance of where we were, we walked up the road to where he painted Mount Sainte-Victoire over 70 times.

Where Cézanne painted arguably some of his best work, we too began to paint. Ours obviously not to the same standards of Cézanne, but I would say that this was the overall best painting day for our group. Even though we all painted Mount Sainte- Victorie in our own style it was clear that we all were influenced by his art in some fashion. 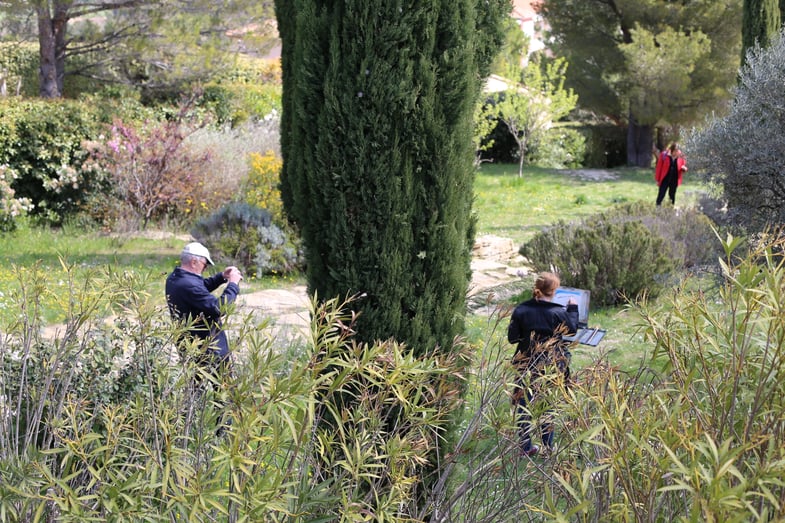 As Jill captures Cezanne's mountain, she catches the eye of a photographer.

After another day of classes our next excursion day had arrived and so we packed into the van and drove to Arles. Eating in the usual fashion on excursion days, the group stopped to have a picnic. Normally we pick a sunny place in a field to sit and eat our fresh baguettes and cheese, but on this trip we actually ate next to an old bridge that appears in one of Van Gogh’s more famous pieces, The Langlois Bridge at Arles with Women Washing. 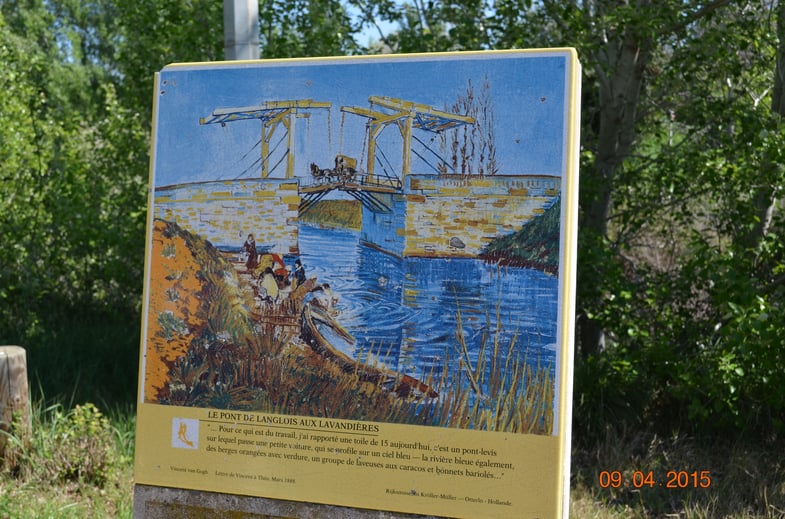 Not only did our day include eating where Van Gogh used to paint, but then we were able to go into the town of Arles and see the old Roman amphitheater and arena. And it was from the top of the tower at the arena that we were able to see where Van Gogh used to live in the "little yellow house" before he moved into the mental hospital in St. Rémy which we had visited the week before. 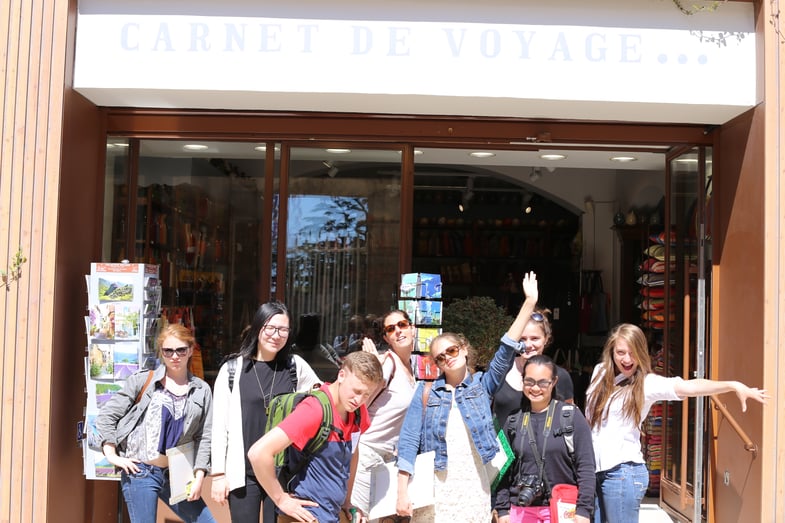 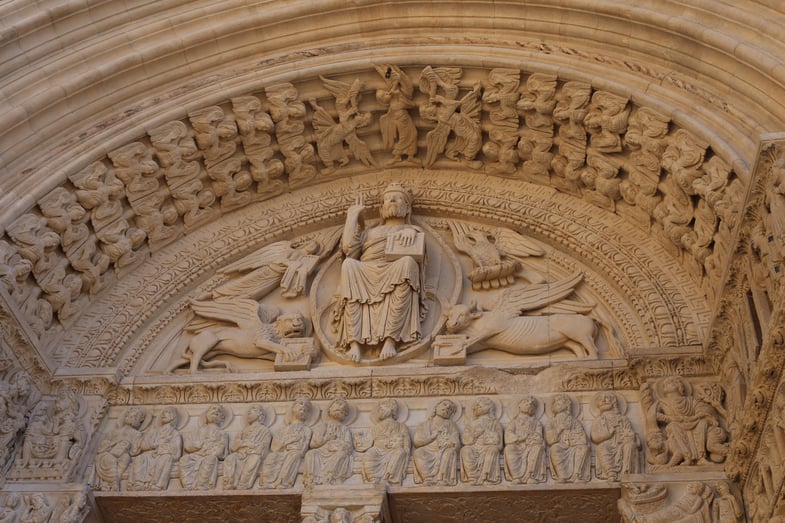 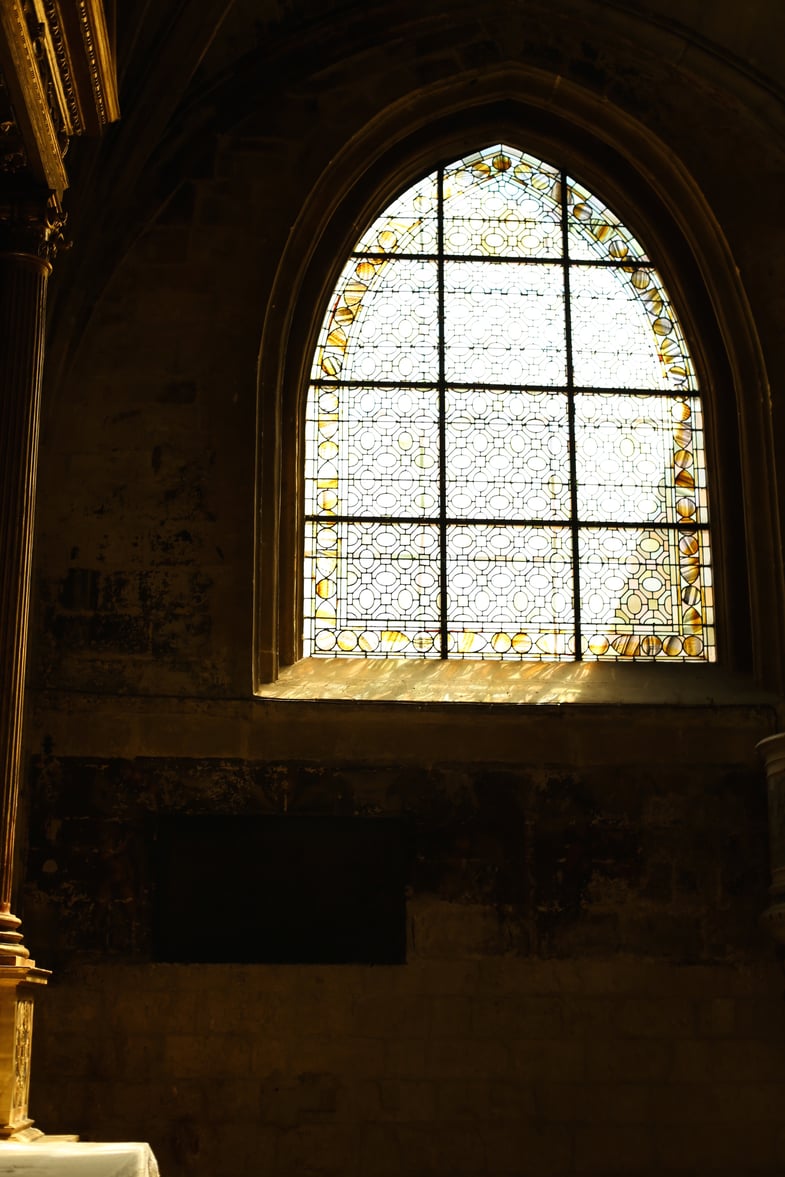 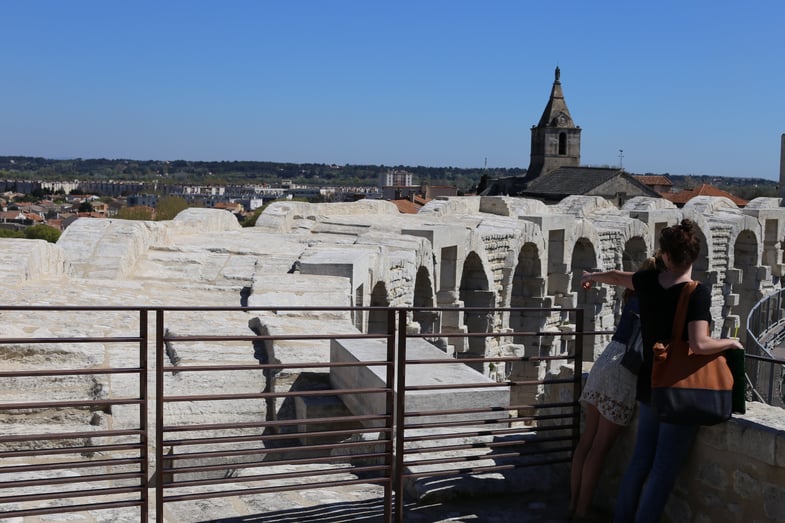 Liv and I on top of the Roman arena looking over Arles.

Realism painting this past week.  We all painted birds. 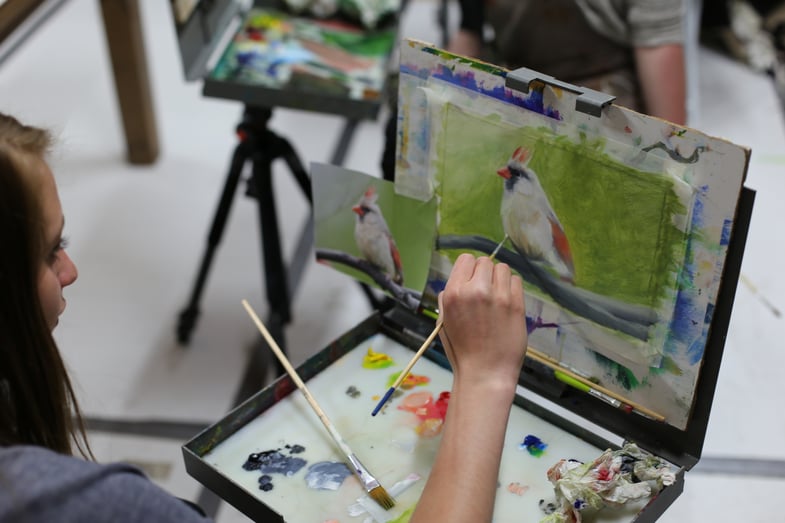 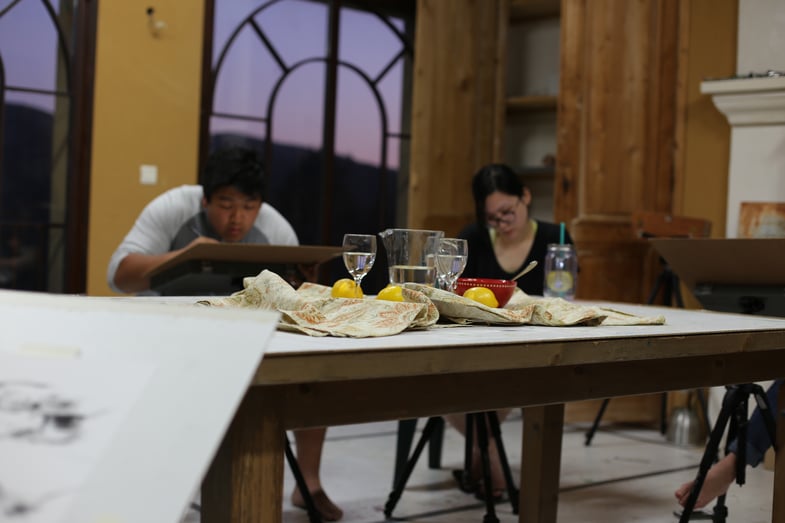 Our next graded assignment was a classic still life in charcoal. 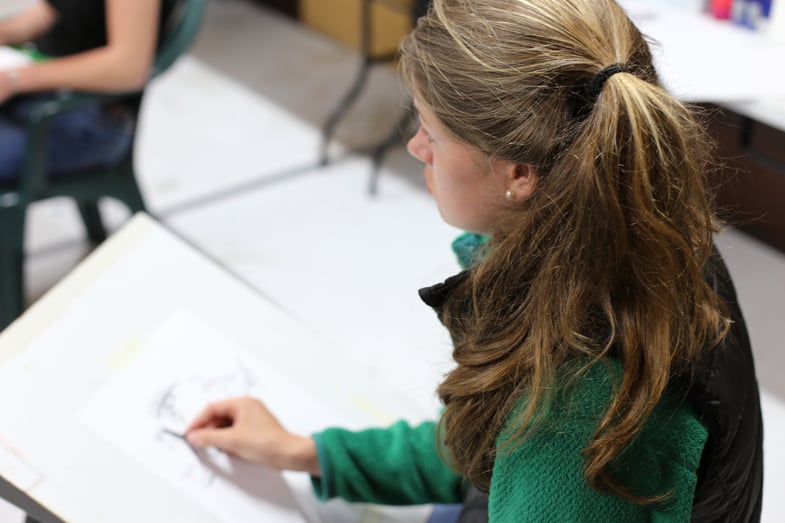 With our week coming to a close we found the inhabitance of the international cold in full swing in our group. Starting with Liv the cold soon spread to the rest of the group until we were all left sniffling and coughing until wee hours in the morning. Being sick in France however is much better then being sick in Andover, here you can take your mind off it in the sun or in one of the most beautiful cities in the world, while in Andover you are either stuck in the health center or forced to try to crawl to each class while feeling like death.

Liv has fallen in love with the French doors.

With the sun shining and the illness beginning to dissipate, Liv and I decided to go for a hike up the Tête du Marquis which happens to be in our backyard. What we thought would be an easy endeavor turned out to be quite the odyssey of bouldering and bush wacking.

Even with sticks littering our hair and clothing we were able to make it to the top, from which we were rewarded with an absolutely amazing view of our new town. It was amazing to see our little village from a different view, allowing us to fully appreciate where we are and how lucky we are to be here. Even though we were left with scratch marks that looked like a cat had just attacked its toy mouse, it was definitely an adventure that we will never forget, just two New England girls taking on a French mountain.

As our weeks progress, check out our webpages and our progress.