The following press release was shared with us by ReVision Energy. ReVision has been crucial to Proctor's investment in renewable energy infrastructure on campus over the past three years. After our most recent installations, Proctor now offsets more than 25% of its energy consumption through solar production, and alternative energy supplies 100% of the school’s electric load.

EXETER, N.H. (December 14, 2015) --- A series of six solar arrays on the campus of Proctor Academy represents one of the largest solar projects of its kind at a New England school. The 334-kilowatt project at the co-educational boarding and day school in Andover, New Hampshire, is valued at $1.1 million. Just in time for winter, the most recent installation was commissioned earlier this month at the school’s privately owned and operated ski area.

The sun provides power for music recording artists, dancers, actors, boat builders and hockey players at the school, in addition to a campus child care facility and a ski area. Including the campus and the town in general, Andover has one of the state’s highest per capita rates of solar power market penetration among its approximately 2,500 residents.

All of the projects were installed by ReVision Energy at no upfront cost to Proctor through a series of Power Purchase Agreements (PPAs). A PPA allows schools, non-profits and municipalities to buy “green” solar power from an investor at a lower cost than “brown” electricity from the utility grid. Proctor has a future option to purchase the arrays at a substantial discount.

Jack Ruderman,Director of Community Solar Initiatives at ReVision Energy, says the company is actively seeking interested organizations to form future partnerships. “The PPA is a powerful and innovative tool that allows towns, schools and non-profit organizations to install state-of-the-art renewable energy systems at no upfront cost that will generate clean energy and produce cost savings for decades and decades.”

ReVision owns the rooftop array at the Wilkins Meeting House, the first installation which was completed in 2012. IGS Energy owns the other five installations, which were completed this year.

The first five projects are rooftop mounts, while the most recent project is a 107-kilowatt ground mount at the Proctor Ski Area. The 352-panel array spans 300 feet across and will power snowmaking operations as well as the general campus.

The six arrays will generate approximately 389,508 kilowatt hours (the equivalent of avoiding carbon dioxide emissions from 625 barrels of oil each year) of solar power on Proctor Academy’s campus. While the electricity from the solar arrays will directly power the school’s facilities due to a closed loop system, the Renewable Energy Credits (RECs) generated by the solar arrays will be transferred as part of the power purchase agreement. Proctor has, however, elected to pay a premium to ensure 100% of the electricity it purchases originates from renewable energy sources. 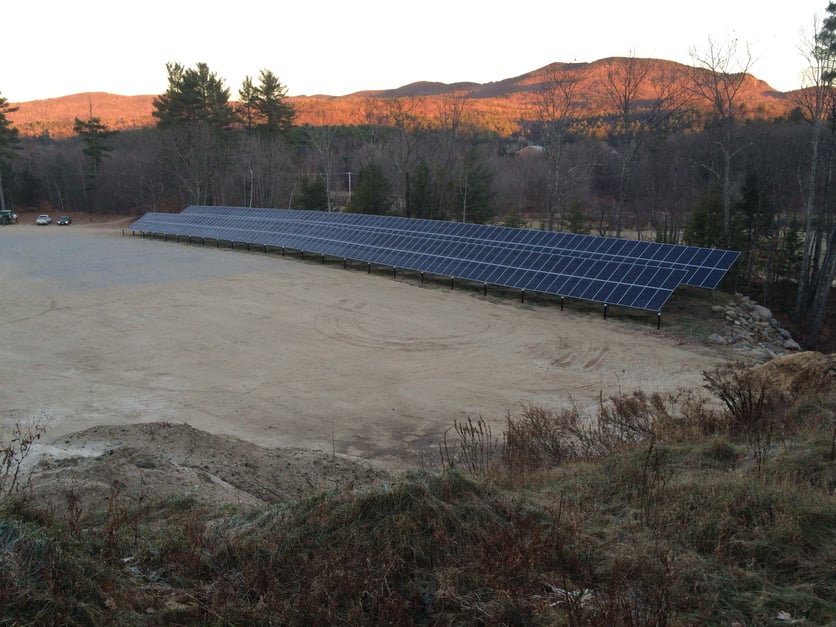 Proctor Academy is in the middle of a $30 million fundraising campaign. As facilities are upgraded and new construction takes place in the future, the school plans to continue integrating solar technologies and other renewable initiatives on campus.

One of its goals, as stated in its Environmental Mission, is to achieve a carbon-neutral campus. To that end, Proctor already has instituted several measures. The school installed geothermal heating and cooling and a woodchip-fed biomass heating plant, which provides the majority of heat and hot water needed on campus. High-efficiency snow guns and light fixtures are in place, as are non-toxic cleaning products and recycling efforts. The school also sources local and organic food and manages its own 2,500-acre woodlot where students cut, split, stack and eventually heat their dorms with the wood.

Student Hal Ford, a senior at Proctor Academy, applauds his school’s sustainability efforts. "Having a conscious environmental mission signifies that we are living at a place that not only strives each day to live more mindfully, but also actively makes social and financial investments in a manner compassionate to the world and to other people."

Fellow senior Grace Hovem adds, “Having an environmental mission is so important because, when we come to Proctor, we enjoy being outside, and we are prepared to go out in the world with our whole lives ahead of us. But, if we remain passive in the face of climate change, that future will not be guaranteed.”

Proctor Academy is a private co-educational day and boarding school located in Andover, New Hampshire. The school serves 360 students in grades 9 through 12. Students benefit from a rigorous academic program, experiential off-campus programs, fine and performing arts, competitive athletics, and a wide selection of extracurricular activities. The academy's 2,500-acre campus includes 45 buildings and spans the southern face of Ragged Mountain across the Blackwater River valley to the Proctor Ski Area.

ReVision Energy is northern New England’s local solar professional, with more than 5,000 installations since 2003. ReVision designs, installs and services commercial and residential systems and offers financing. The company is a certified B Corporation, using business as a force for good. ReVision was recently named a top ten installer by SolarReviews, a nationwide consumer rating service of solar companies. ReVision has four locations throughout New Hampshire and Maine. For more information, visit: revisionenergy.com.