Mike's Notes: Digging In to Dig Out

Forecasting the weather has always been a tricky endeavor. The early calls for Thursday’s storm were for wind, a little snow and cold weather backing in after the event, but nothing epic. Nothing like a winter hurricane. Nothing like Grayson’s bombogenesis of 24 hours. And there is something delicious in the unpredictability, something cleansing in the wildness of a storm.

For parts of Thursday the campus was sheeted and disappeared. Standing by Farm House it was nearly impossible to see Shirley Hall. From the windows of Maxwell Savage, the chapel flickered and disappeared as the millibars compressed and the storm began to rage. The wind came in the afternoon, tearing across the campus. Walking from the west side of campus to the east was relatively straightforward, a downwind cruise, but tacking from Jake’s to the Field House was a brutal slog, a twisting firehose of snow greeted every dodging move. The smart students, the ones who had them, wore goggles.


The plows scuttled around the campus and then circled back. Untouched for an hour, North Street or Observatory Lane became nearly impassable. Footsteps made down a path disappeared in minutes. Snow began to sculpt into drifts, some of them massive. The glass doors near the Wise Center were sealed shut by two, three, then five feet of snow. The wind, cyclonic at times, hampered clearing efforts and cut visibility to nothing. Doors were flung open as Grayson tried to pry its way into buildings with tendrils of snow carried in by gusts. The inroads had to be pushed back, doors pulled shut. 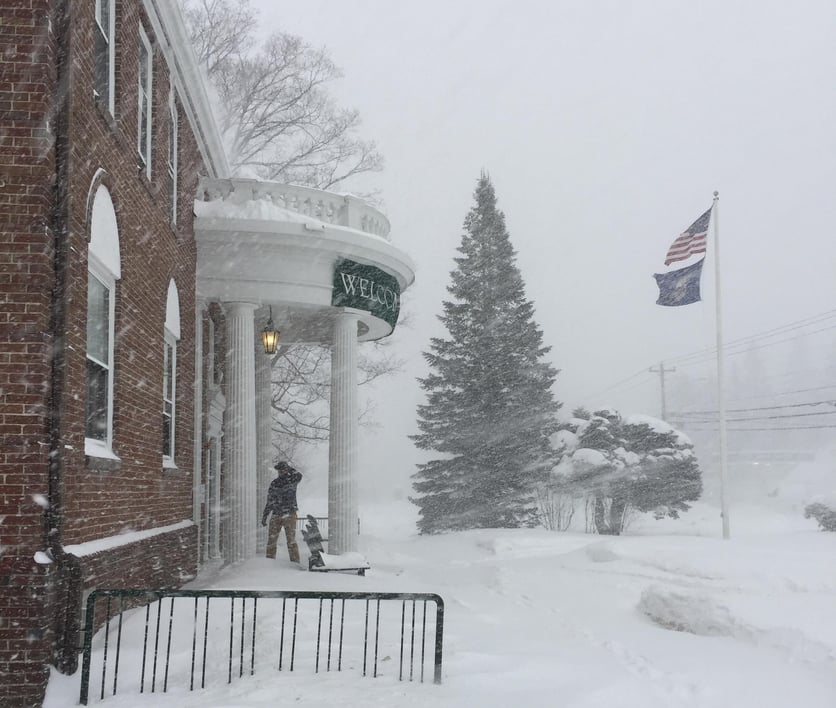 Travel plans? Forget it. Our European Classroom students scheduled to fly out on Thursday night were re-booked for Saturday. It was enough to just get to New London or Sunapee. Concord? It seemed about as far away as New Jersey. A few day students bunked on campus last night while others left early. As did faculty and staff. The rumble of the big state plows down Route 11 or the maintenance trucks on campus was a comforting sound, their flashing lights a hopeful sight. Drivers attained the instant status of demigods.

Today we dig out and bundle up. Temperatures are falling and the wind is blowing, and in the departure of 2018’s big nor’easter, bitter cold is arriving. We’ll adjust. This stretch, like any stretch of named weather, presents its challenges but also invigorates us. This is January. This is New Hampshire. WInter is what we do.