Most of us go to the technology help desk because we dropped a phone, cracked a screen, forgot a password, or need help with an update. We need something. We go to the tech office humble and looking for help, and when we get to the first floor of the Fowler Learning Center, Anna, Jim, Spencer, Susan, or Seth wait with their store of infinite patient, deep knowledge, and good cheer. Those five manage and work with constant change, continual upgrades, and the persistent (and silly) “user error;” they live professional development. At Proctor, the repair space of grounded work stations, microscopes, and tiny tools is noteworthy and impressive, but the people are awe-inspiring: Anna, I am convinced, can field strip an iPhone (any model) and reassemble it in under ten minutes.

But what has me most impressed this week is the “tech block,” an opening for any student who wants to venture down into the technology landscape to learn, to play, to repair and to get skills credit during an open academic block. When I wandered through on Tuesday, there were six students and I saw three iPads in various stages of being dismantled, a laptop opened up for a thorough cleaning, one of the four 3D printers humming away, a new speaker for an iPhone printed earlier being tested, and another student designing a skateboard with the program Fusion 360. The place was a hive of activity with Anna and Jim moving from one student to the next, offering suggestions and helpful directives about heat guns and LCD screens (they don’t mix), static electricity and dismantling a laptop (always ground yourself), or just clarifying what component is what (“That little wire is hard to replace, controls all the sound in an iPad, and you don’t want to sever it when you are taking off the iPad screen!). 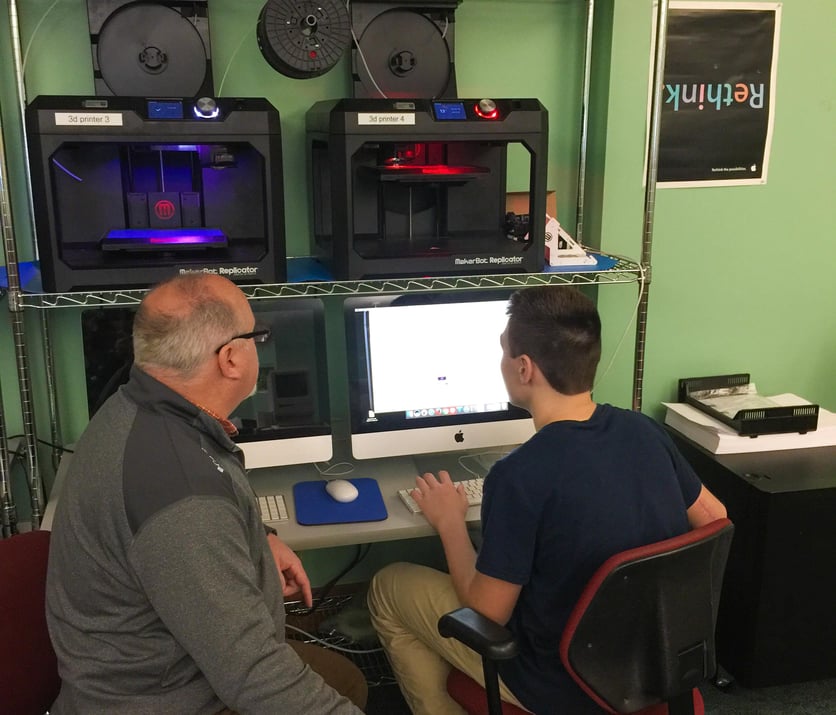 We hear about the benefits of “tinkers’ space” in schools these days, that space of learning where theory dissipates in the zone of doing. The tech block is one of the ultimate opportunities for those tinkerers to find just that space and time at Proctor. Possibilities are not defined by curriculum, but by interest, and to me that’s the intrinsic “sweet spot” of learning. Anna described one student to me as her “go-to” for iPhone repairs. Did he come with any particular skills? “No,” Anna said, “just curiosity and a willingness to learn.” The student working with Fusion 360 told me he had looked at some on-line tutorials, but then said, “It was easier to figure the program out on my own by trying things out.” These are self-directed students, motivated students, and they thrive in the school’s tech zone.

Collapsing the distance between learning and doing is one of the critical components of sticky learning. Often it is that learning that helps clarify real passion and starts to set trajectories for life beyond Proctor. I saw a bit of that in the tech lab this week, and I came away believing that every student at some point in their Proctor career needs a tech block experience.