After an exhilarating first week of exploration and acclimation, we found ourselves preparing for our first expedition in Utah at Coyote Gulch. The day leading up to this journey was filled with much excitement and organization. Before we were to head out, we had to pack up our backpacks with a variety of basic essentials, among them, group gear, clothing, a week’s worth of meals and WAG bags. 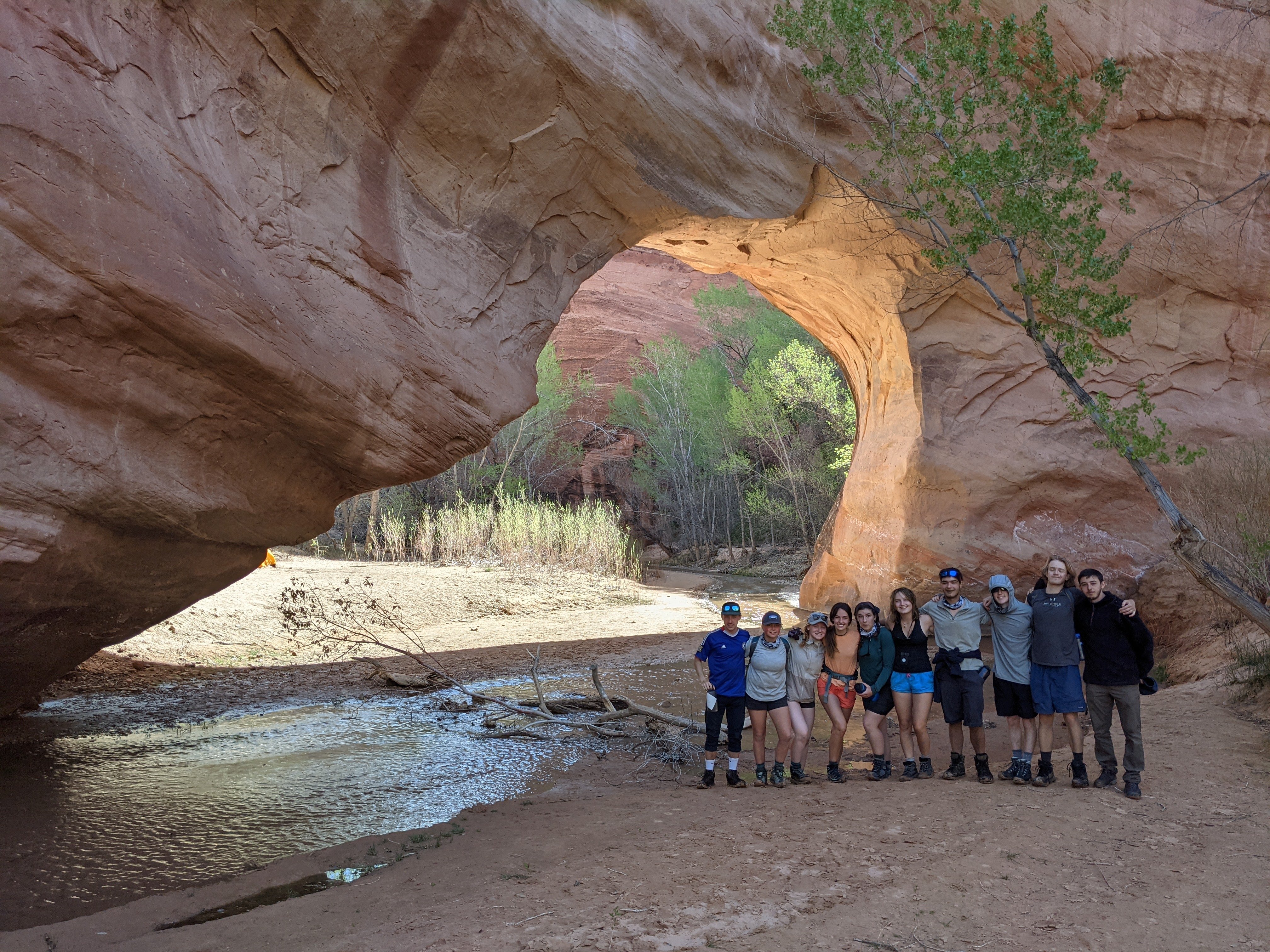 For those of you who don’t know what WAG bags are, they are super popular tools hikers use when they need to poop, but are inescapably proximal to fresh water. The benefits of using these bags includes reducing the release of harmful and disease causing bacteria into the river water. The other benefit is that after using them, you close them up and tie them to your bag… where they bake in the desert sun… for days at a time. They make for fantastic conversation pieces. 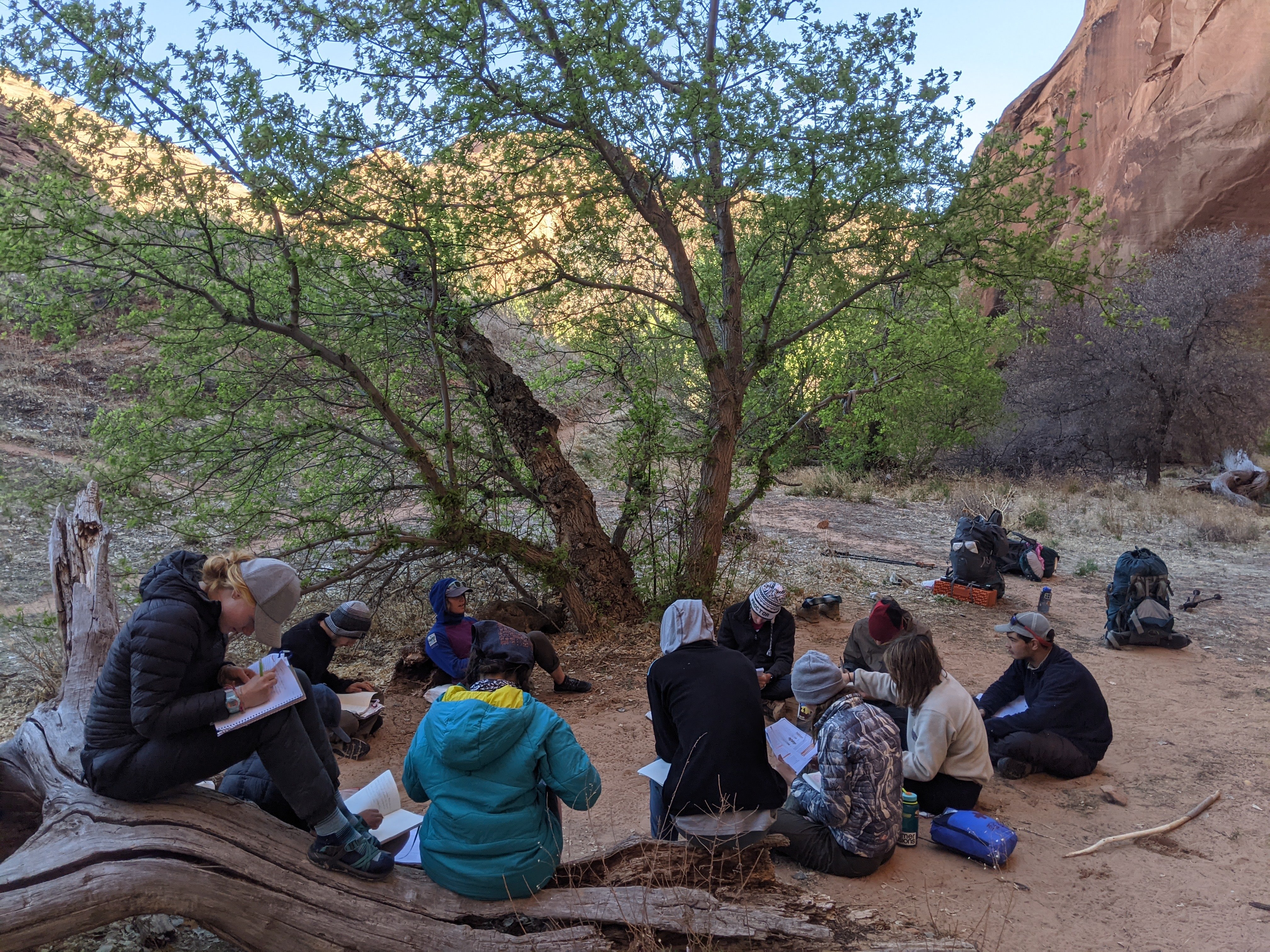 While this is true, we had yet to be able to utilize and appreciate them because we were still in preparation for the drive to the trail. Once we were ready, we hopped onto our trusty two ton steed, DEB, and began down her first dirt road of the expedition. Shortly after getting onto the road, our realities started quaking and hole punchers went flying. The road had become ridiculously bumpy from the overuse and elevated interest of escaping COVID culture. We weren’t sure if DEB was going to be able to make it through the drive. Fortunately for us, that wasn’t the case — yet. We arrived at the trailhead, had a quick lunch and then began our journey into the red canyon. On this first day, the heat was scalding, but the scenery made up for the discomfort — we were surrounded by small shrubs that at first glance seemed to be not worth further exploration; little did we know that they would come to teach us a great deal about ourselves. 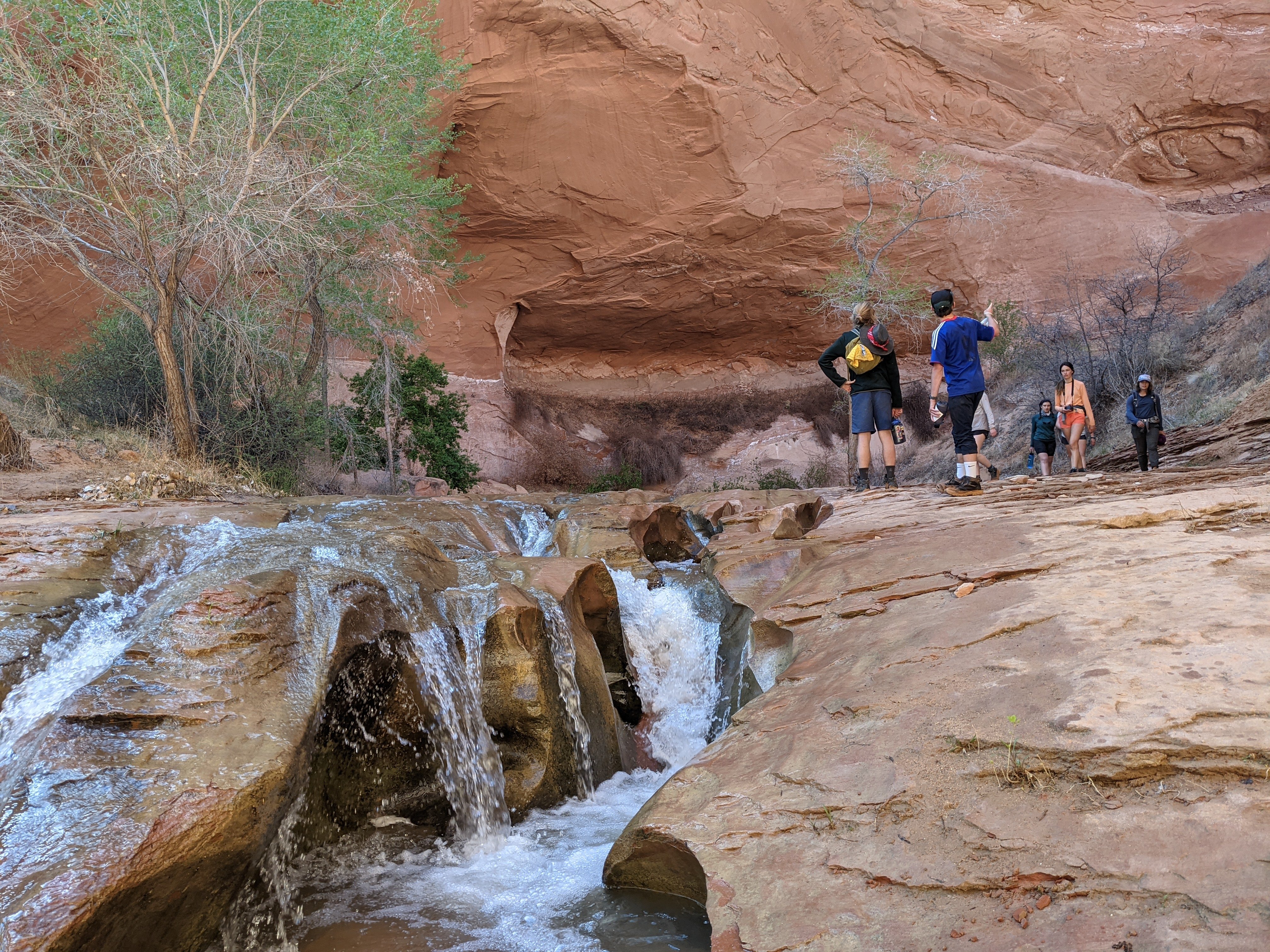 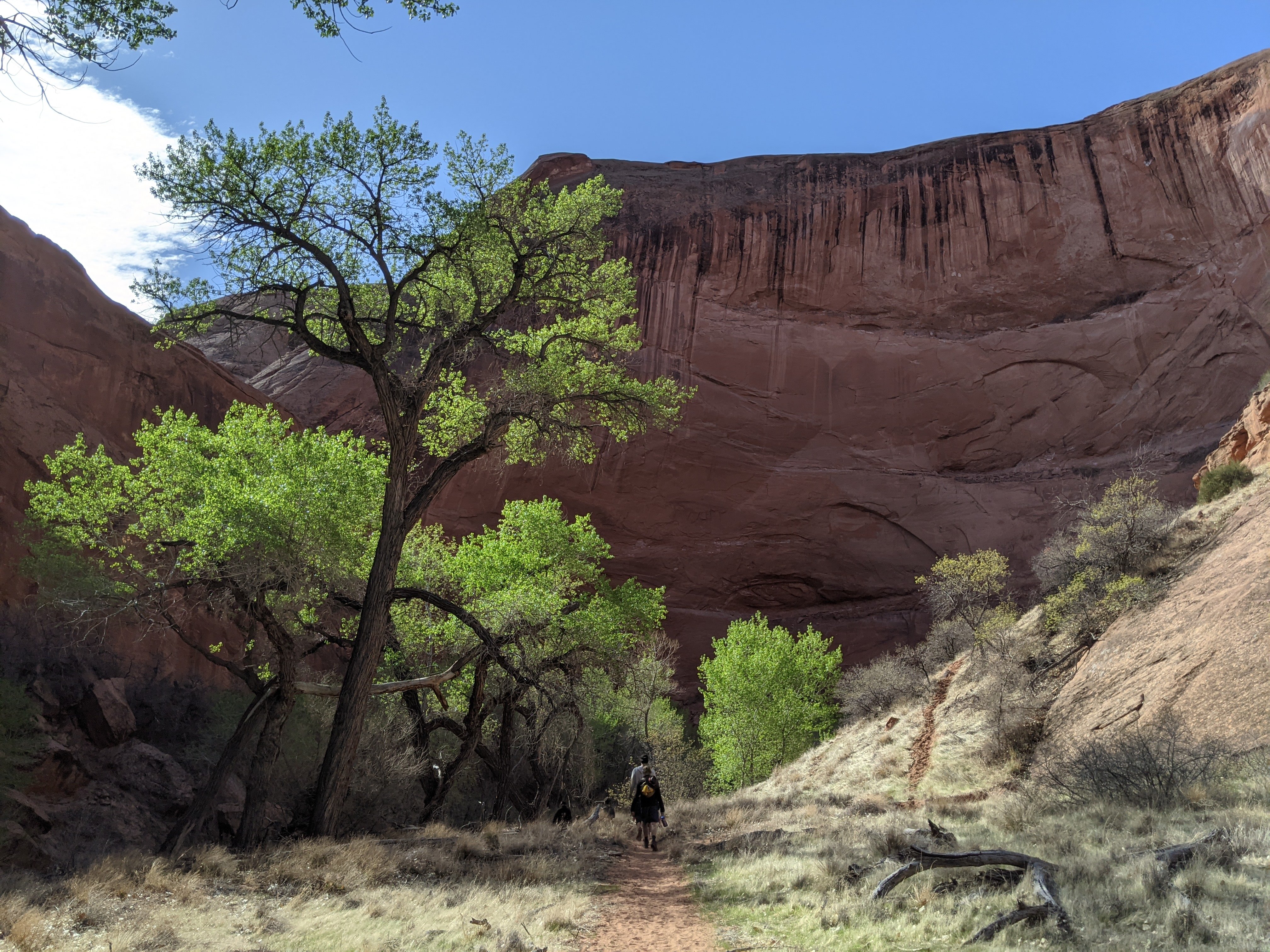 We maintained a good pace and walked aside a stream that guided us through the winding canyon. As we walked, it became apparent that where water flowed, life followed. On either side of the stream, flowers and leaves sprouted in a green so brilliant and new that it didn’t seem that it could be real. During the earliest miles of our hike, we encountered some bovine friends, who proceeded to leave a trail of poop on the path that we were taking — which we ultimately decided to follow. After fifteen minutes of maneuvering through tall and prickly bushes, we stumbled across our campsite. It became obvious that the area was a community bathroom and chill spot or the cows. Despite this, we set up camp and began to explore the area. Nate took matters into his own hands and moved to hike the red rock hills that encapsulated the campsite. I, on the other hand, had to find an area in which we could deem to be a collective restroom area. I hiked up a hill next to the campsite and found it to be a perfect place with an unimpeded view of scenery; I dubbed this flat gem of an area “Poop Plateau”. Nate returned shortly after me and stated,”To be able to name a mountain, you must first summit it”. He then went on to declare, “I have climbed the 7 peaks that tower over Poop Plateau, and I name them to make up Chezniaque Rowe”. Later that night, he would guide a group of interested settlers up to one of the peaks to experience the sights for themselves. In the following days, we would find ourselves deeper in the canyon, whose red walls were streaked with lines of black and brown, where water had flowed down and cut into the rock. The walls loomed and curved over us, sometimes being three hundred to four hundred feet. It was astonishing to see how sound was distorted in certain areas of the canyon. This first expedition marked the start of a new type of bonding for our group, in which we were able to discuss ideas and experiences without distraction. 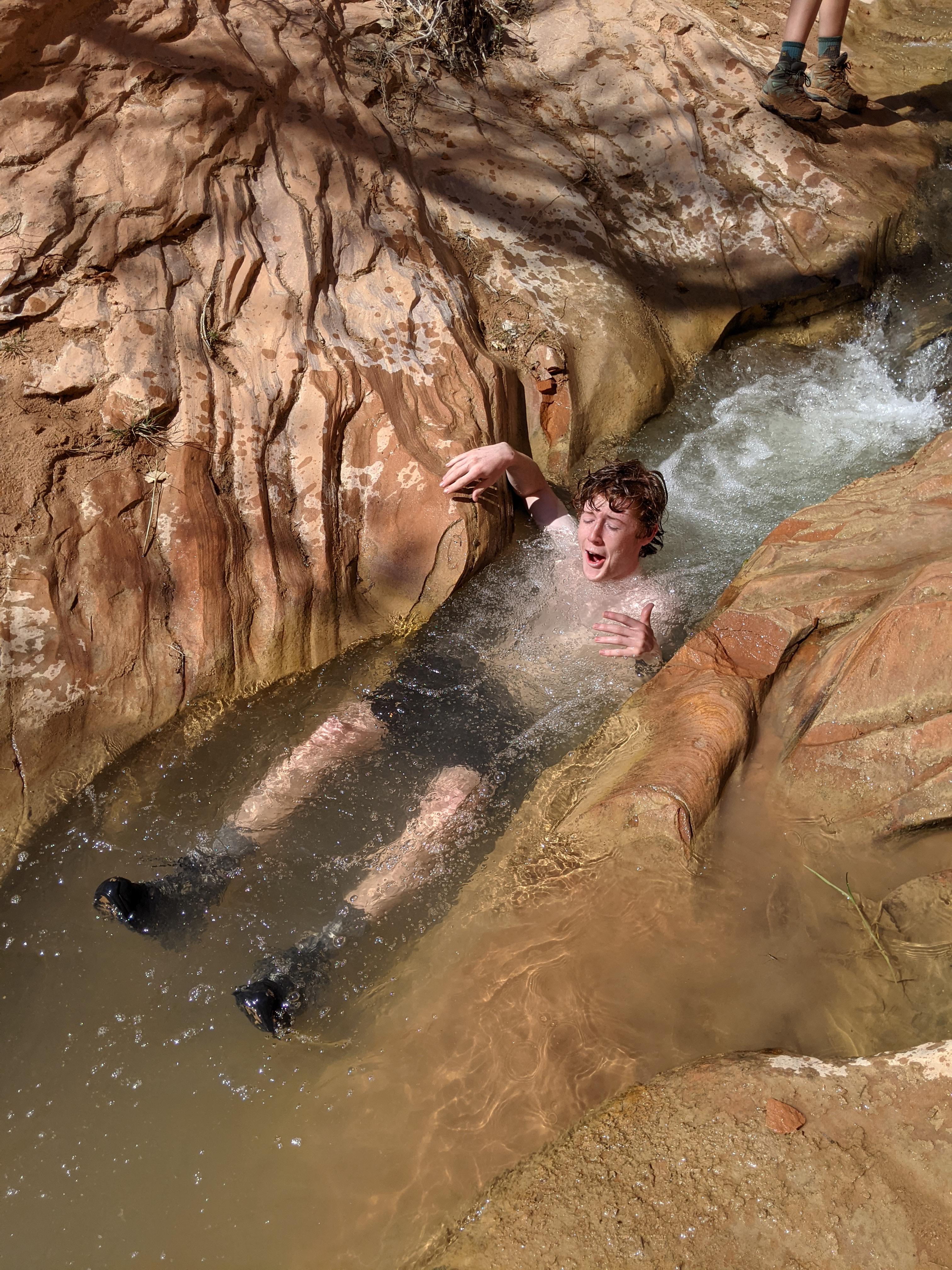 After these few fantastic days, we found ourselves exhausted and ready to nestle down in the comfort of a front country campsite. As we approached the trailhead, many of us ran toward DEB — we stopped for a quick lunch before packing up and beginning on the bumpy ride. After fifteen minutes of driving, DEB started sputtering, and then abruptly turned off. Battery fried. Circuits shorted in her underbelly. There was nothing we could do about it. She had brought us all the way out here but didn’t have it in her to bring us back. 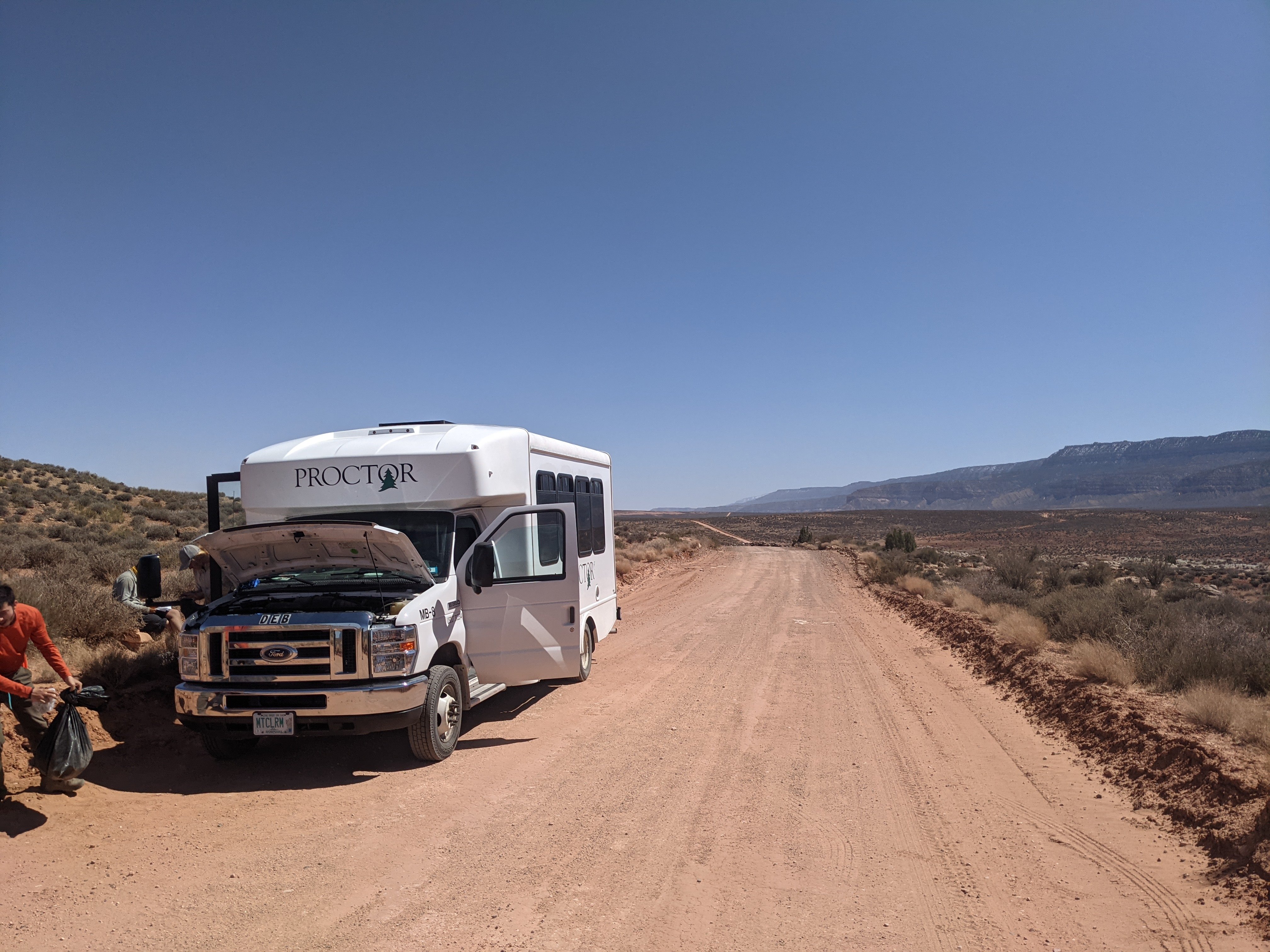 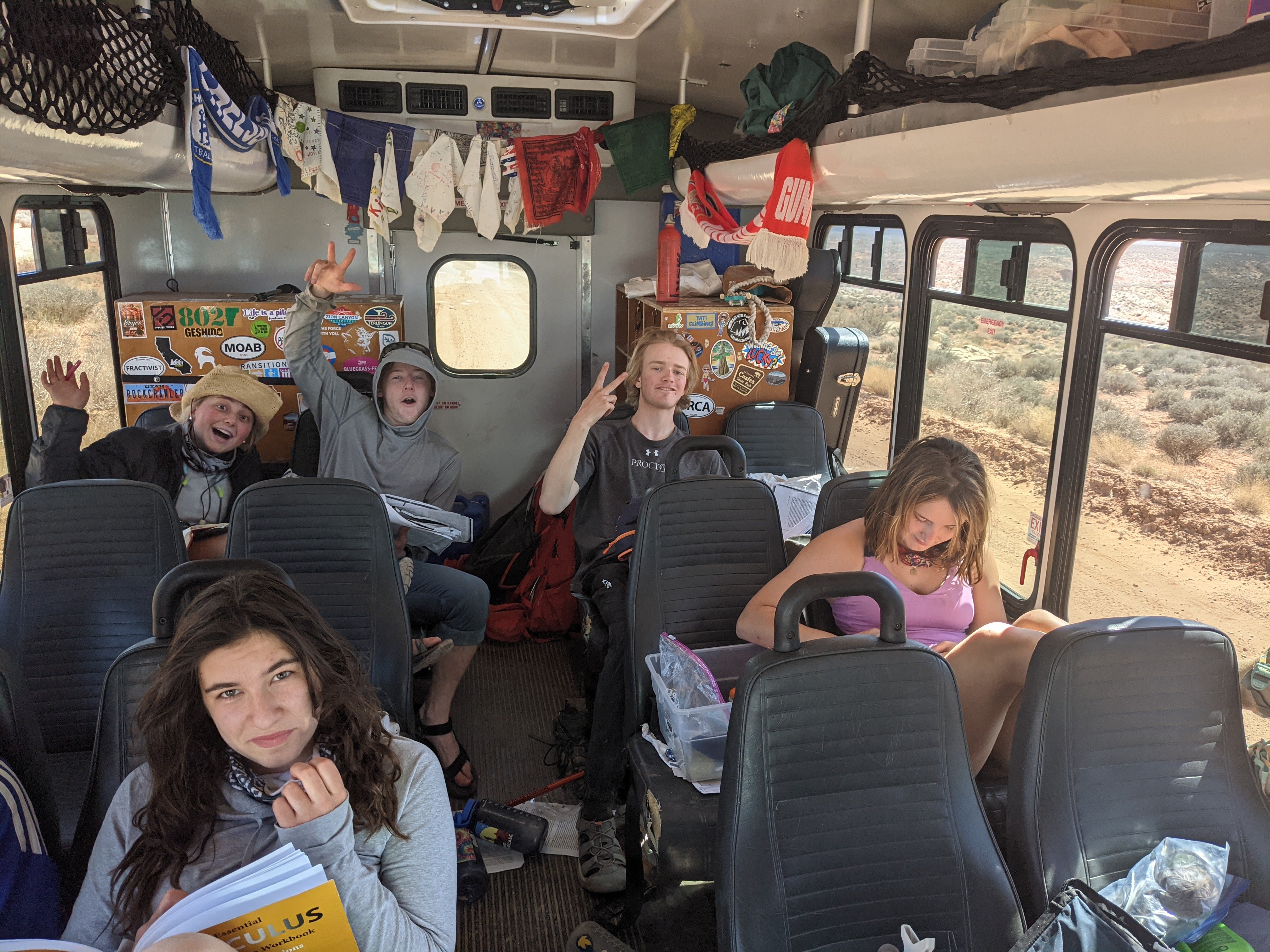 With DEB temporarily deceased, we found ourselves stranded in the desert. No fear, we are an adaptable group of high energy teenagers and quickly found ways of entertaining ourselves. Firstly, we dumped all of the bags outside of the bus to make sure that we had enough space to be able to stay in the bus comfortably. But instead of lounging around, the majority of us took to the center of the dirt road to participate in an organized tournament of what was named “Thunder Thighs”. We drew a circle in the pebble filled dirt and each competitor fell to a side. With the whip of a belt on the ground, each round began. The first person to hit the inner side of their opponents thigh gained a point, first to three clean slaps was the winner. We went through about fifteen of these combats, each person developing unique tactics and adapting them to their opponents. Some won, some lost, some bled and screamed of injuries to the bone. Nine hours later, and after developing the early symptoms of desert brain we were finally rescued by two park rangers who picked us and all of our gear up, and brought us to our campsite, where we would spend the next several days looking forward to our next adventure. 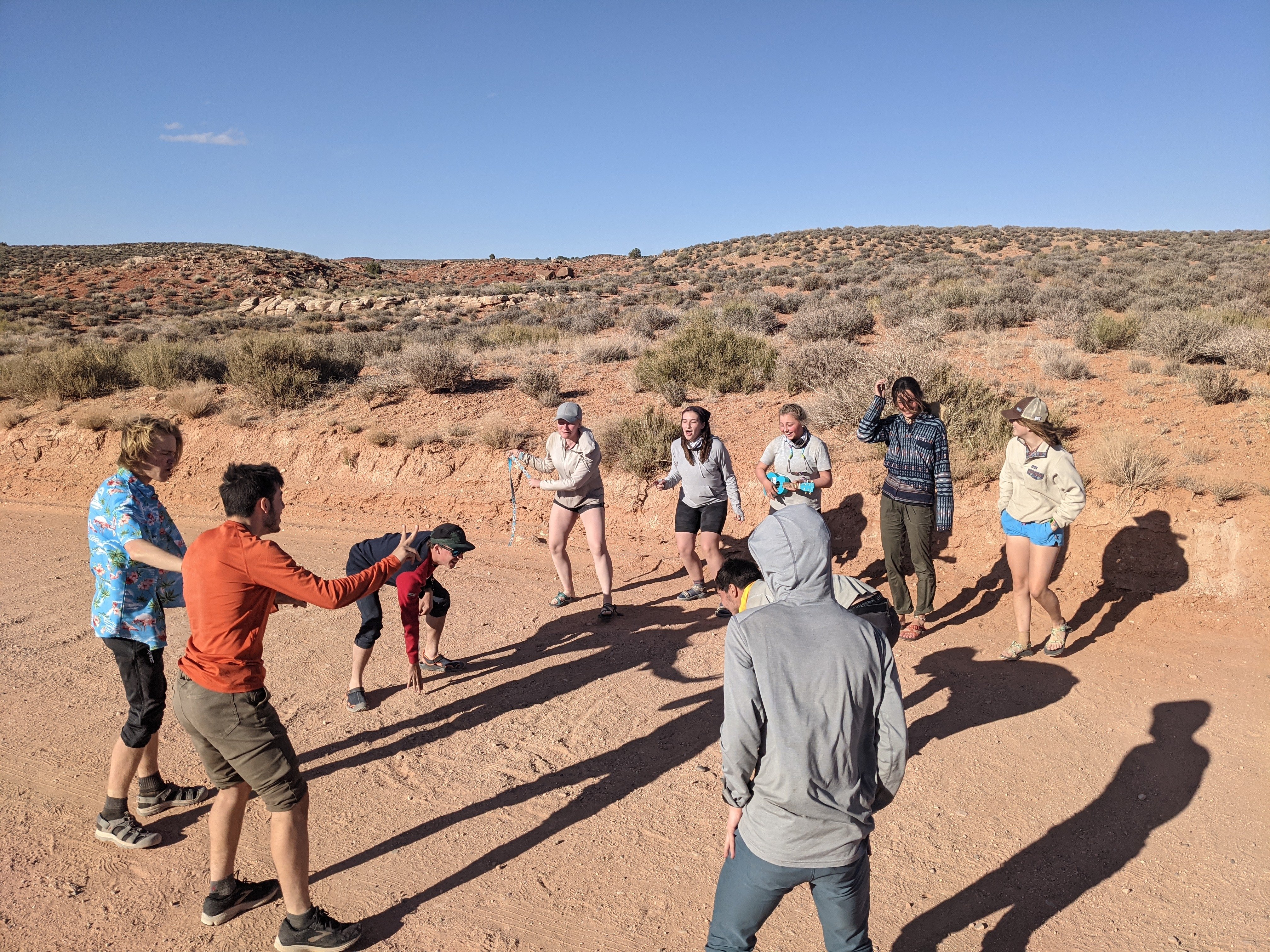 The time in which I was in the canyon drastically changed my perspective on how complex and beautiful life in the desert is. In contemplating all that I saw, it has become immensely apparent that life can adapt and even thrive in the tough ecological conditions. This recognition was further embedded throughout discussions that we encountered throughout this expedition. These conversations put into perspective the ways of humans are inclined to produce systems, philosophies, and infrastructures to procure sustainability and comfort. From an early age, many of us are taught to learn and identify characteristics of that which we are observing through objectifying it. In this objectification, as the observer, many of us are taught to separate ourselves from that which we are observing. To analyze it as if we are separate from it. In this separation, we risk developing a dangerous ignorance that can erode the awareness of a consciousness different, yet similar to ours. We may be able to successfully characterize and learn about a subject, its relationships — but where do we fall in the hierarchy of relationships?

In some cases, because we have the awareness of the mechanisms of a subject, we lose respect for it, and we see it for its utility instead of its sentience. Without giving it the respect that it deserves, we risk exploiting it to the point of parasitism. When that becomes the case, what do we really have? Are we satisfied with the fact that we have proven to ourselves that we have the capacity to control that which we are objectifying? Or is it an illusion — a madness even. Are we really in control?  Maybe the reason that these plants are still here is because they have adapted the capacity to be aware of us. To control us. We rely on them for our sustenance, and what do they rely on us for?