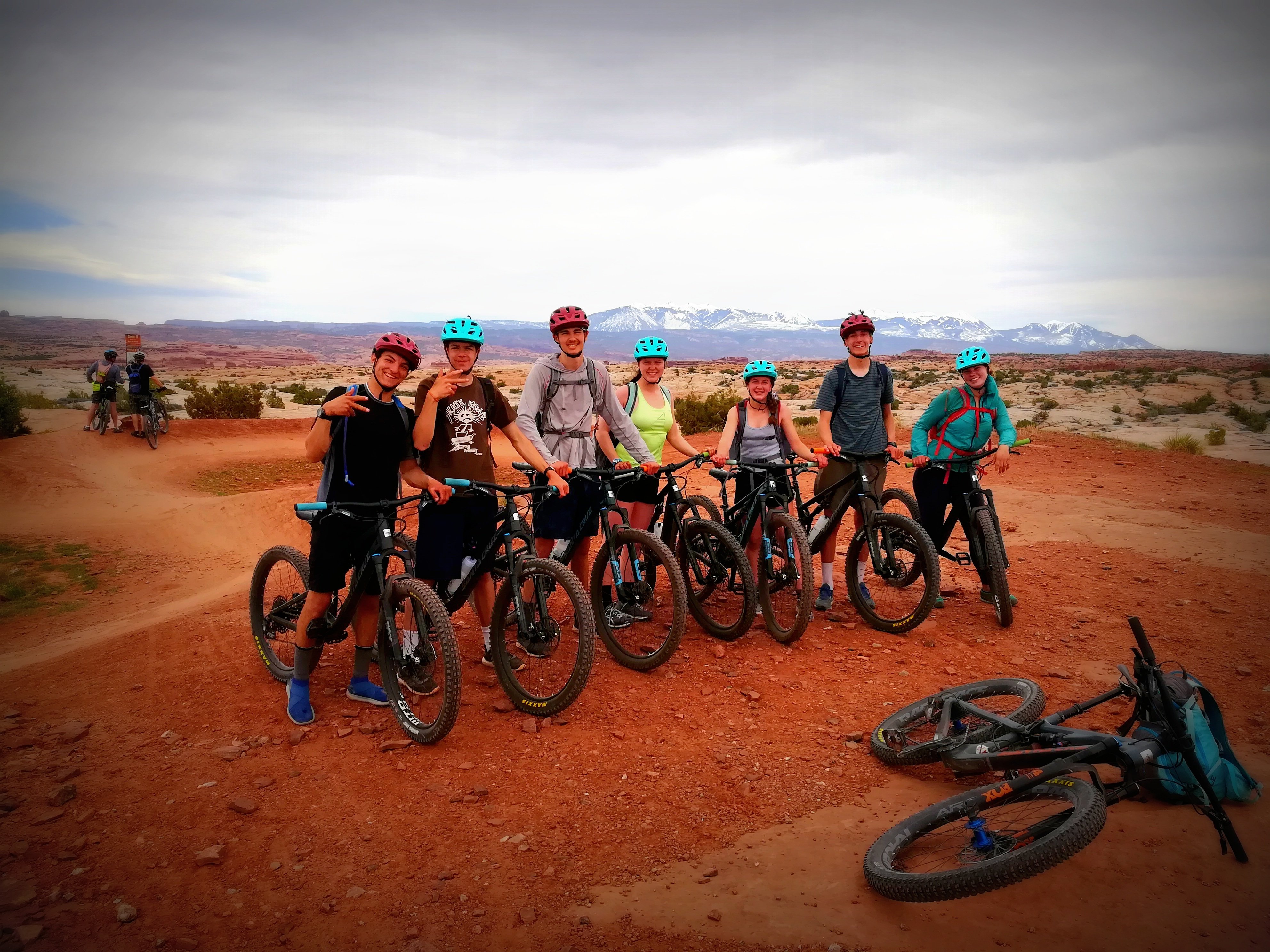 Bucket showers in the Colorado River, conquering Wall Street, mountain biking and a trip to the aquatic center- what a week! After leaving our temporary home of Capitol Reef we were all excited to see what our next stop, Moab, had to offer. As we drove, it was amazing how frequently, and drastically the landscape changed. One moment we saw plains that seemed to stretch for miles, then the next sky high, enchanting, snow covered mountains.

Upon arriving in Moab the twelve of us were welcomed into the luxurious arms of the ACT campground where we all took well deserved showers and did our laundry. After a night at ACT campground where we cooked in an actual kitchen and played a heated game of monopoly, we were all ready for a good nights sleep knowing our first rejuvenation day was on the horizon.

After our food buy for the week we all ventured out into Moab to shop, eat, and spend some more quality time together. Moab felt extra special because it was our first real taste of civilization in weeks! As Monday rolled around, excitement filled the air as we headed to the post office to pick up mail from our first mail drop. It was like Christmas morning inside Deb (our beloved bus) as we all tore apart letters and packages from our loved ones. We received notes, treats, snacks, and most importantly some clean clothes.

One of the aspects that made Moab so special was the outdoor culture that we experienced first hand while climbing at the infamous Wall Street. We spent hours working to scale the cracked sandstone wall, all taking turns to see who would make it to the top. This day was very special for me because I was able to make it to the top of a challenging wall that few completed. I was amazed by the view at the top of the climb. I could see across the Colorado River into our campsite. I have really fallen in love with rock climbing on mountain so far because it really challenges me, and it is a true test to trusting each other. After a long day of climbing we all were eager to get some rest so we could face our next adventure, mountain biking.

When the morning came we drove to Rim Tours where we all piled into a van and were taken to our trails for the day. We were spilt into two groups— one that was for those up to a challenge and the cool kids (Audrey, Quinn, and I) who wanted more of a “chill ride”. As we rode we went on many trails climbing up to views of Arches National Park and a magnificent canyon.

On our final day in Moab we were able to go to the Public Library to spend time working on our individual final projects and start initial planning for the ISGE— our final expedition that is planned, and executed by the group, instead of the instructors who usually plan our adventures. We spent hours at the library researching and brainstorming. After coming to our first draft idea for our ISGE we ate a quick lunch and then drove over to the Aquatic Center.

We all enjoyed our time in the pool, on the diving boards, and the water slide. It was an awesome PMX of categories and sharks and minnows, while Tommy and Asher were challenged to a flipping contest by some kids at the pool, all in all a successful trip. As our time in Moab came to a close we spent time packing up our camp for our early wake up the following day along with spending time together. My favorite parts of Mountain Classroom so far have been when I am surrounded by the group. Whether it is laughing, cooking dinner or enjoying each others company under the stars, I am extremely grateful for the people with whom I get to spend each day.

The best type of wake-ups on Mountain Classroom are the early ones. On a chilly Thursday morning, we woke up just before dawn in order to embark on our drive to Great Sand Dunes National Park in Southern Colorado from the wonderful town of Moab, which blessed us with great climbing, mountain biking and tons of delicious food. We had no expectation for what was to come, except for hopefully some great sand dunes. We had a wonderful morning wakeup by Tommy at around 4:30 AM and quickly packed up camp in eager anticipation of the days ahead. After a very peaceful car ride, where we all got much needed sleep and some music from our iPods, we arrived at Great Sand Dunes National Park in the early afternoon. We first went to the visitor center where we learned about how the sand dunes were formed, bought some cool stickers, and Kate and Quinn tried on their iconic matching hats. After filling up our water jugs and marking our journals with the junior ranger stamps, we searched for a campsite.
As Kate made several calls to campsites, managers made comment on how crazy we were for sleeping on snow covered ground; it was estimated to drop down to a cool sixteen degrees over night. But as Kate mentioned, we are (sorta) from New Hampshire and therefore tough as nails. We arrived to our campsite, unpacked our tents and then for PMX we had an EPIC snowball fight. The winning team: Emily, Bella, Faolán, Tommy, Jonah, Emmie and I annihilated the less superior team, despite their valiant efforts. With all joking aside, our decision to have a snowball fight, instead of complaining about the conditions, demonstrated the flexible, dynamic, and strong character of our Mountain Classroom group. It also shows that we know how to have a  ton of fun in any scenario.
After PMX,  we had a little bit of free time and then gathered back together for our usual routine of dinner, evening meeting, and an awesome all group card game of  “How Do You Meme” on the toasty women’s’ bathroom floor. After tons of laughter and “memeing” we all snuggled in for the night, very glad for the warmth of our sleeping bags and excited for the fun to be had tomorrow in the sand dunes. 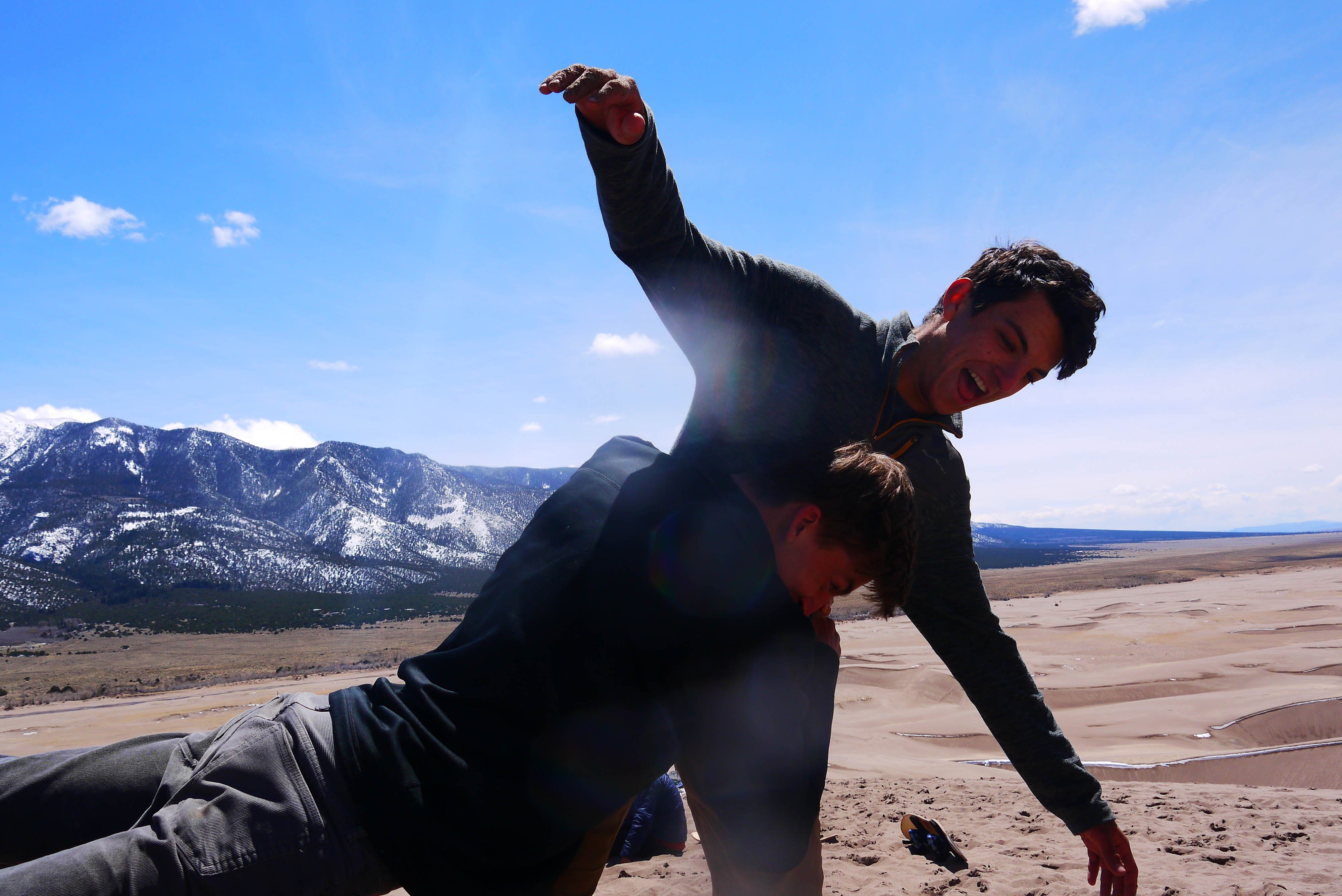 The sand dunes were a sight that evoked awe and wonder. In front of the dunes were the rolling Colorado plains, which seemed to stretch for miles and behind were towering snowy, rocky, mountains; they looked very displaced in the landscape. It was not a typical place for a sand dune, which only added to the beauty of the whole scene. It was created because of the wind pattern in this area would blow the erosion from mountains and circle in a vortex that created these massive sand dunes. It was an immense and almost indescribable sight. 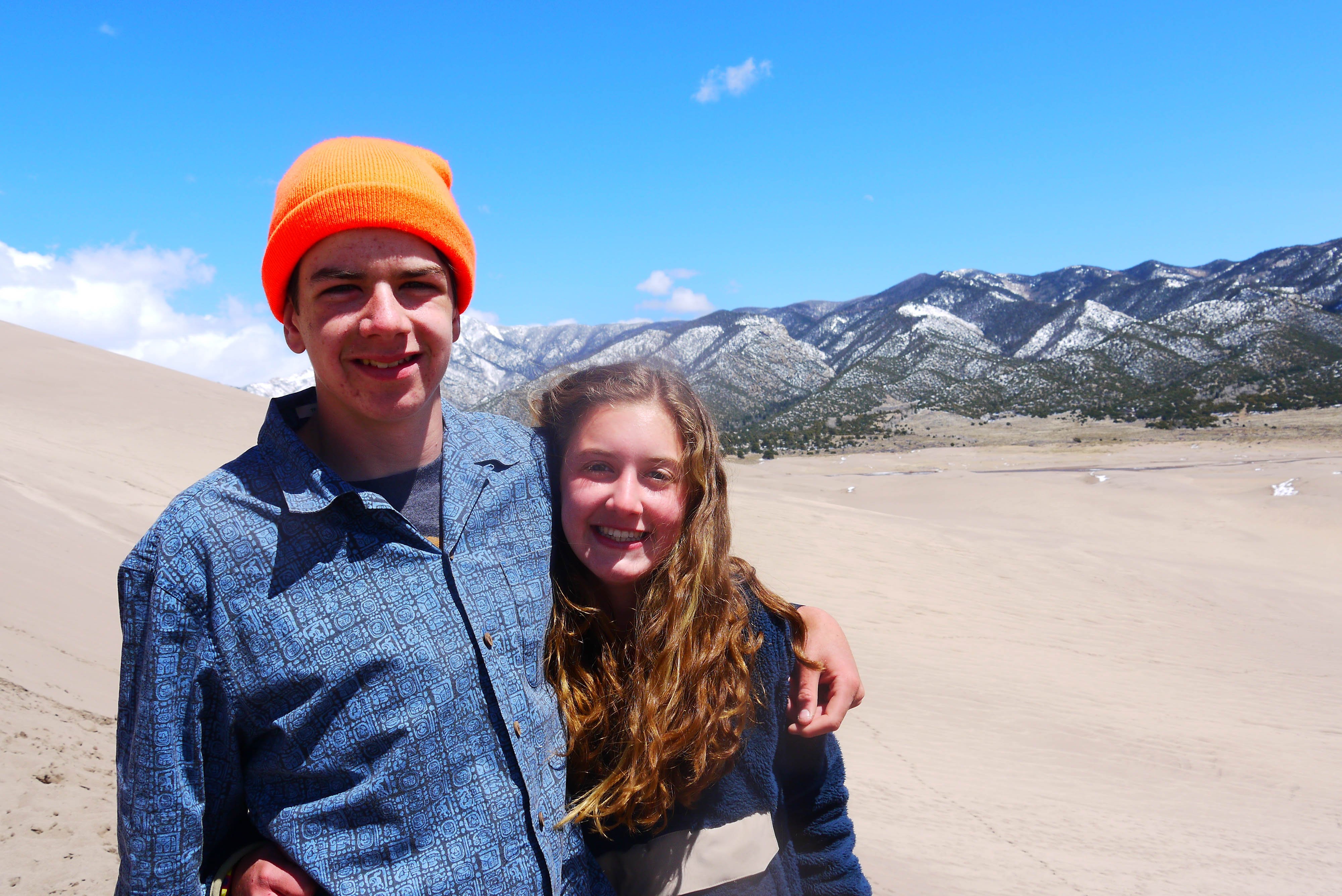 On Friday, we embarked on our adventure to this magical place. Upon arriving to the bottom of the dunes, we were transported into a new environment. Sleds and sand boards in hand, we walked across a frozen river and onto the sandy oasis. Half of the group stayed at the bottom as we watercolored, chatted and took in the sun. The other, started the sand boarding and sledding. About a half an hour later, the groups convened and we all tried our hand at sledding and boarding. The sled was fast and out of control, only for the most daring of individuals, while the snowboard was technical and a whole lot of fun. The only downside to the thrill of going down was the walk up, which warmed us all right back up on such a chilly day. What ever distance we had descended, we needed to climb up. The climb was steep and sandy, a very difficult combination and made a killer workout! Jonah worked on his front flip, which he successfully completed for the first time and Tommy decided to walk as far up as possible to maximize his sled ride. His whole journey took at least a half an hour to climb up until he crashed and plummeted down the dune. Kate practiced her cartwheels off the steepest part of the dune, where she would fall and almost scorpion each time. Emily was an excellent sand boarder after twenty plus tries and after a hike up she would plop on the sand, exhausted from the journey. After tons of fun and some delicious peanut butter and jelly (and sand) sandwiches, we had a goofy photoshoot. Tons of pictures later, we left the dunes and headed back to camp.