Proctor's Mountain Classroom group shares a final blog of the Winter Term as Timmy '20 reflects on their student planned and led expedition to Joshua Tree National Park. Congratulations to this winter's group on a job well done!

After a few days of full circle, which consisted of homework, free time and a late night javelin hunt, we began planning for our last expedition. Little did we know, planning our own 4 day expedition would be very difficult. We sat in a little coffee shop for 3 hours, until our brains were completely fried. We made many phone calls that just seemed to lead to dead ends. Becoming stressed and tired, we sipped on sugary coffee to keep us going. After ruling out multiple parks to hike in, we finally settled on Joshua Tree. A 22 miles hike across the Boy Scout Trail, with cool day hikes.

The day we have been thinking about since the beginning finally came. The start of ISGE, our last expedition where we get to put the skills that we have been learning for the past 10 weeks, to the test. The day was raw, with light showers that came and went. We packed up the last of our things, said goodbye to Kate and Quinn, then set off down the sandy path. As we got deeper into the desert, the rain began to pick up. Our rain gear held strong for a while, but the rain didn’t give up. It held steady, flooding the washes, until our path became a river. Navigating became tough, our trail was now a flash flood, so we were bushwhacking over cacti covered hills.

Just as we thought it couldn’t get any worse, the fog began to drift in. At this point we were just walking straight through a river, fully embracing every moment of it. We somehow managed to stay in very happy moods, maybe because it was Valentine’s Day! The visibility was now very low, and the trail was nowhere to be found, so we came to a group consensus and turned back. Sean’s hands became numb and he started to worry, this is when the group started to stress out a little. The cold was now hitting us hard, completely soaked and unsure of where to set up camp, we became a little weary. As we made it through the worst of the flooding, our worries suddenly vanished. Quinn appeared out of the thick fog making us feel very relieved. Once we finally set up camp, we all crawled into the same tent. We shared some good laughs, had evening meeting, and went to bed. We crammed 9 people into a small 4 person tent. 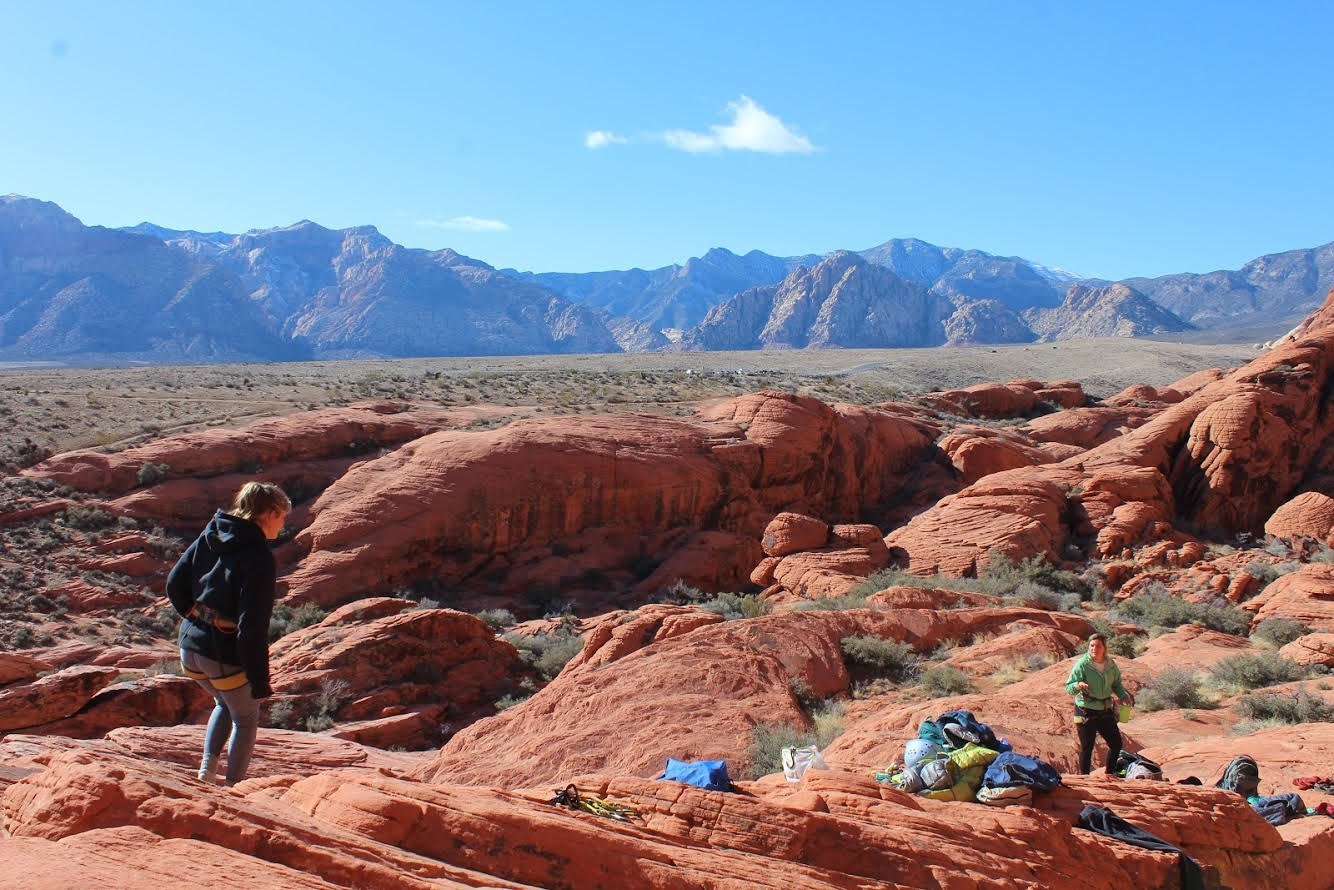 We awoke the next morning to a beautiful sunrise that painted a bright pink canvas across the sky. The strong desert sun quickly dried out our clothes as we got ready for Day 2. We hiked a sloshy 7 miles to camp where we rested for a little while, then went on a 2 mile hike to the wonderland of rocks. We passed a lot of people on this hike, who probably thought we were a bunch of lost kids who have been wandering the desert for a few months. The next day was a lot more relaxing. We had a shorter hike to camp, which gave us more free time. We used this time to explore, play mafia, and have some DMC’s (Deep Meaningful Conversations). 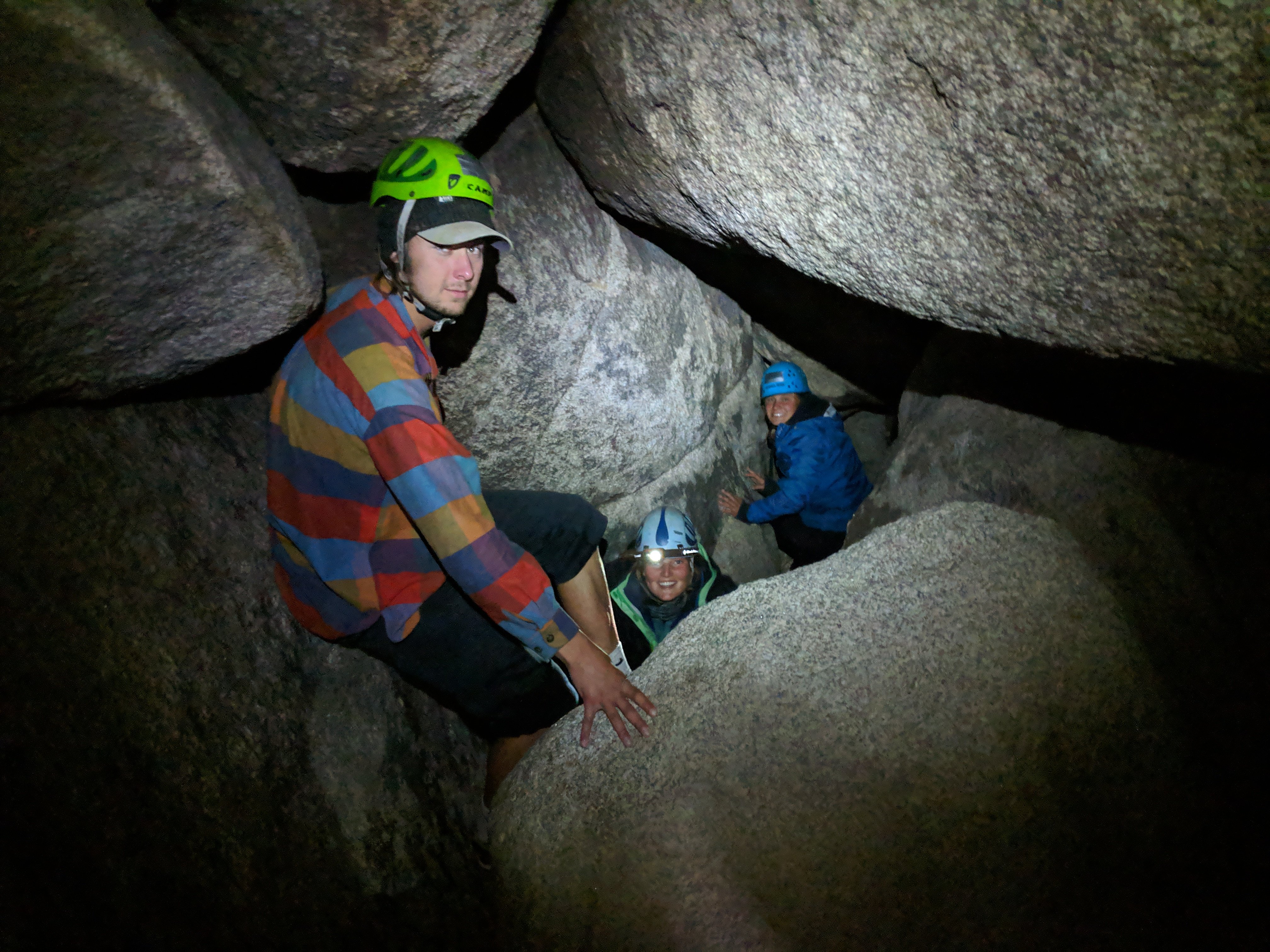 That night we all squeezed into the same tent again and enjoyed our last night of ISGE. This expedition brought us all closer. We enjoyed every big and little moment together. We were pushed to our limits with navigation, weather, and teamwork. These challenges and simple moments forced us to come together, and successfully compete ISGE. We got out of camp early on our last morning and met Kate, Quinn and Deb. Before loading up our stuff, the group decided to play a round of protect the president, where I found myself being tackled to the ground by everyone else. What a fantastic way to end expedition.

So that was that, ISGE came to an end, along with all of our expeditions. In a few short days we would be flying home to be greeted by our families. Mountain Classroom has been one of the greatest experiences of my life, and I will never forget a single moment of it!