After incredible time spent in Moab, Utah, our group charged southbound for our home base of Escalante, Utah where we reunited with the dusty, expansive, and sleepy Escalante Heritage Center Campground. Our return allowed me to reminisce on just how far our tight little group of nine students has come in a holistic sense; We went from dragging our heels on three mile hikes of flat terrain to tackling twelve miles of consistent elevation on the Boulder Mail Trail. I am so incredibly grateful for the opportunity to participate in such a unique and special experience.

In order to articulate the type of energy expended as the nine of us fabricated our Independent Student Group Expedition, or "ISGE," I would first have to give readers a bit of context: 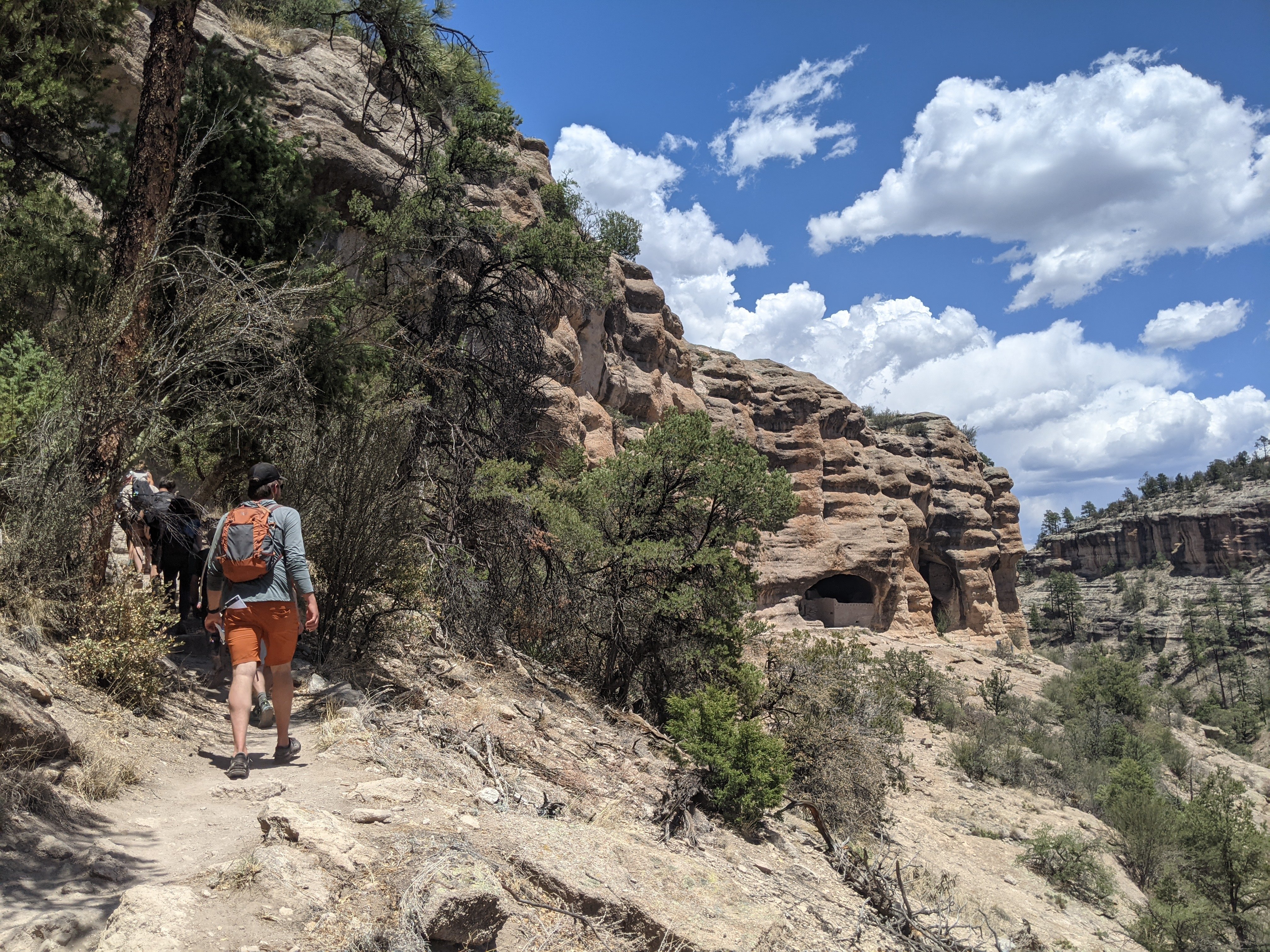 ISGE is just about the capstone of the Mountain Classroom experience; students plan the logistics and itinerary of a multiple-day hiking trip without any assistance from our instructors, Quinn and Erica, and are entirely independent from them from the moment we step across the trailhead, to our arrival back at our van. Planning our trip was a much bigger task to tackle than we all may have understood from the beginning but as a team, we took this challenge in stride and successfully applied our acquired skills to create a magnificent, final hiking trip. There were many different candidates for our location, including Bears Ears National Monument, the Black Hills in South Dakota, Black Canyon in Yellowstone, Phelps Lake in the Tetons, and the Gila National Forest in New Mexico. After ruling out several locations due to permitting, lack of water, and mileage, we decided on the Gila National Forest, which was over a day's travel away in New Mexico.

We began our final expedition with a quick group picture in front of the Gila National Forest information booth, which warned us of rattlesnakes, bears, and poison ivy. I personally and a few others recently got over a significant bought of poison ivy, Emily's case by far the worst, and are bracing ourselves for signs of it during our long drive home to New Hampshire. 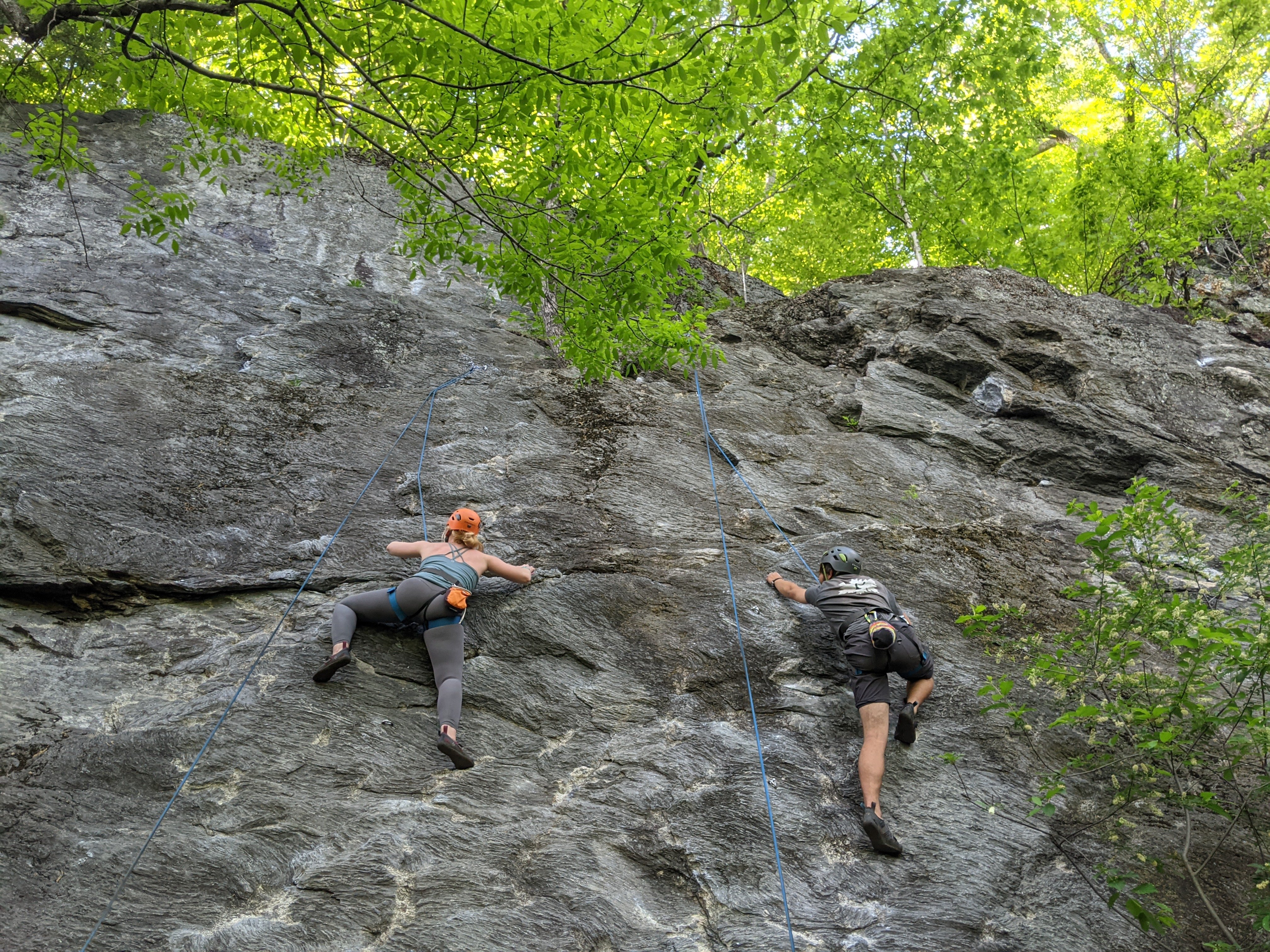 I would have to say that the ISGE backpacking trip was my favorite, for the most part scenically. Hiking up and over the canyon reminded me of our trip to Coyote Gulch, both similar in that the hike up and over the canyon was a bit brutal and scalding hot. Amid our first few hours on the trail, with sweat dripping into my eyes clouding my vision, we passed a fellow hiker who was kind enough to tell us, "Yeah, you're not even close, not close at all", which was very encouraging and hilarious during the heat of the day. However, the minute you set your feet on the canyon floor, you are engulfed in an oasis of color, life, bird song, and blissful energy. A concept that I have come to understand here fully is: where there is water, there is life.

The vibe of the Gila National forest was intoxicating; descending into the canyon felt like sipping the purest cool water after a day of being baked alive in the sun. I immediately felt a surge of energy and excitement for the days ahead of me. The canyon floors are lined with rose heath, which look like tiny little daisies, and the sides of the canyons had these extremely tall, arching Arizona Sycamore trees with a circumference that showed us just how long they had been there and a white, smooth bark that stood out against all of the other flora in the area. The next corner we turned filled our vision with a massive, naturally formed cave tucked into the side of the canyon. The cave reminded me of our time spent walking through the Gila National Monument Cliff Dwellings learning about the American Native Indians, the Mogollon peoples, who once inhabited the land seven hundred and sixty-four years ago. The Mogollon were a hunter-gatherer and farming community who built complex dwellings in the caves of the Gila National Monument, which much later became a protected piece of land in 1907. 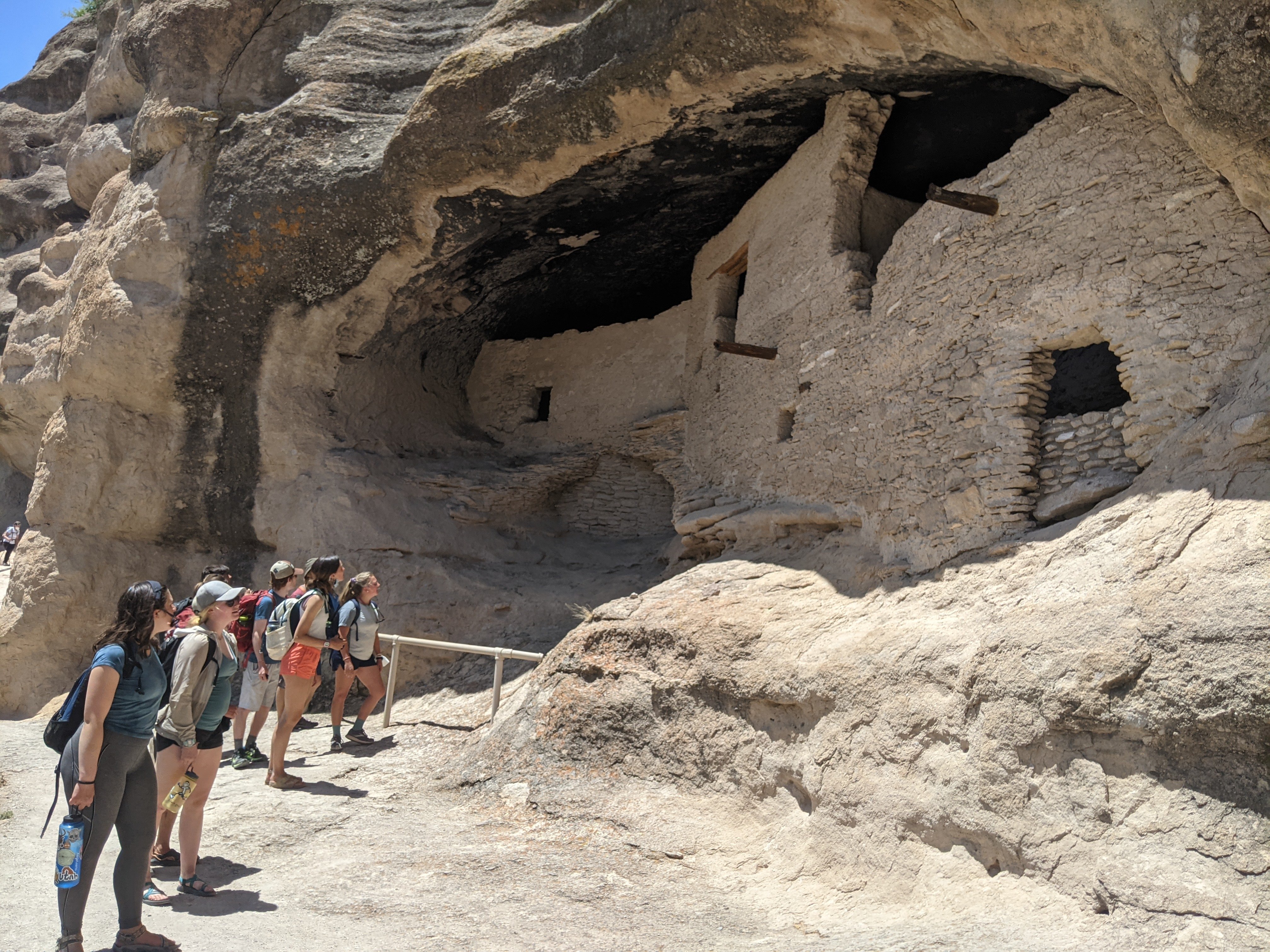 Back to hiking - After roughly four miles of hiking through refreshing rivers and fields of poison ivy, we soon hiked into our first campsite of the trip, at the intersection of Little Bear Canyon and the Gila River. We were thrilled to be tucked along the river, which the boys quickly jumped into while the girls (and Camden) began setting up our tarps. The group walked down to a rocky beach beside the river, and Annie jumped in and the rest just enjoyed the sunshine. Aubrey and I ventured down the riverbank and quickly saw the abundance of fish, frogs, and tadpoles in the river. Excited by this, we waded further and scooped up some massive tadpoles in the palms of our hands. A small lightning storm came through but quickly blew over us leaving us with a marvelous, golden sun-shower. After a satisfying dinner I strolled down the trail to use the bathroom when I came upon Aubrey, again, sitting on a boulder near a stone face which led into a deep part of the river. It was past sunset, so the water was dark and cool, and the color of the plant life surrounding us was a deep green. We dove in from waist deep water and swam around for a bit.

The two of us fell asleep outside our tarps under the moon, counting shooting stars and getting comfy in our sleeping bags.  Emily and I hit the whisperlites at seven the following morning and fueled the group for our seven-mile hike to the Jordan Hot Springs. 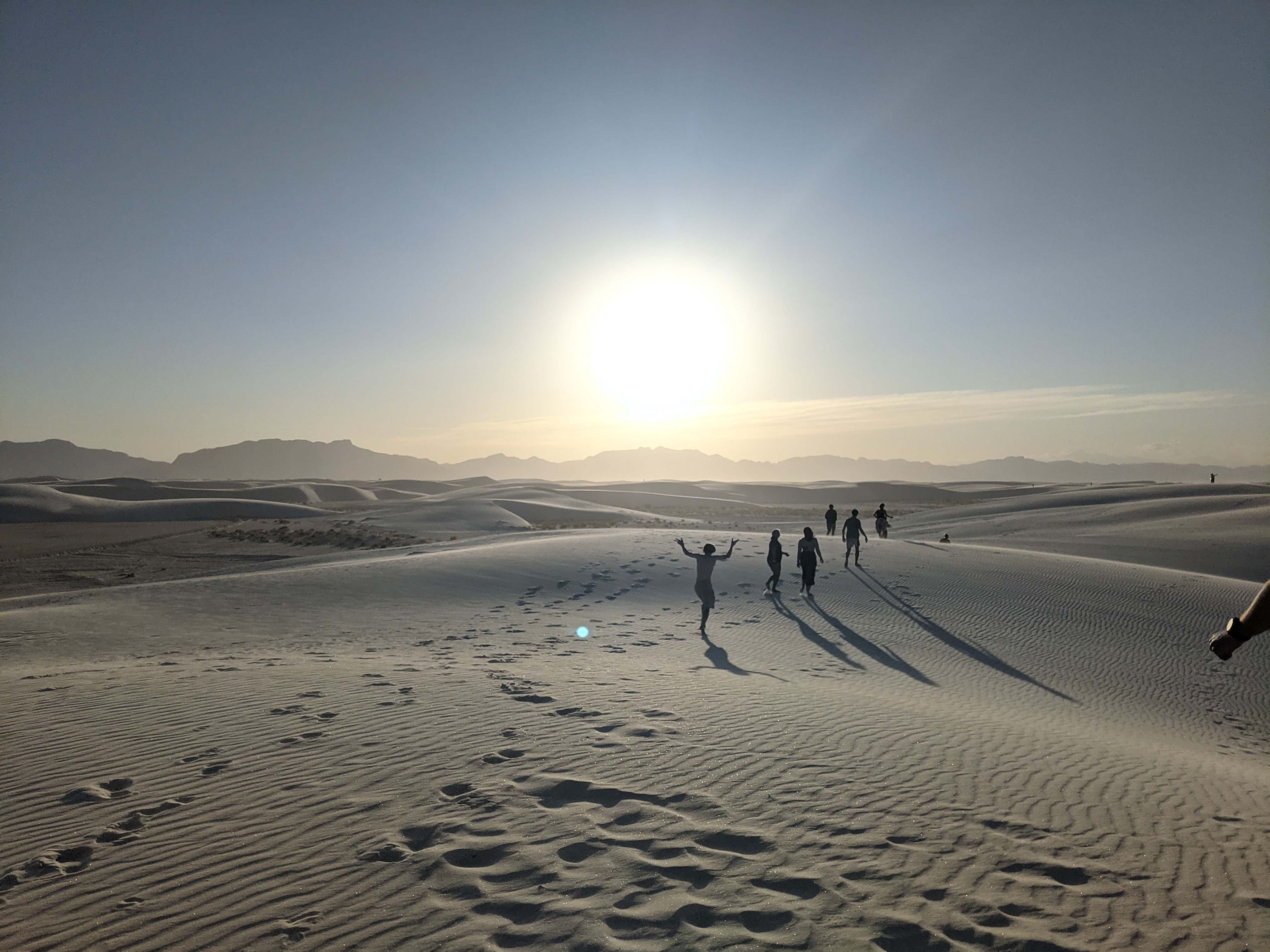 Ten or so river crossings after the beginning of our hike, we reached an intersection and I followed the path where we were very quickly met with the hot springs. All nine of us tore off our nasty hiking clothes at the sight of this and slipped into the beautiful clear blue hot spring that gave off the essence of a hidden sanctuary. I felt like I was in the middle of a jungle; there was a stream trickling down into the pool from a root above our heads, and the rim of the pool was a few feet high, filled with root systems and large rocks. The adjacent side was lined with stones where water flowed into a second pool lower than the one we were soaking in, and there was a fallen tree above our heads. The group was either piling rocks onto Nate's back as he floated around aimlessly, throwing algae at each other or simply enjoying a natural beauty that encompassed us. It was tough to leave this magical place but leader of the day, Baxter, eventually dragged us out, but only after Cam, Aubrey, and I decided to put our socks and hiking boots on in the hot spring, Cam falling into the pool in the process. Our boots warm and filled with water, we shot on over to our second campsite, which was a beautiful, open Ponderosa Pine forest next to the Gila River. 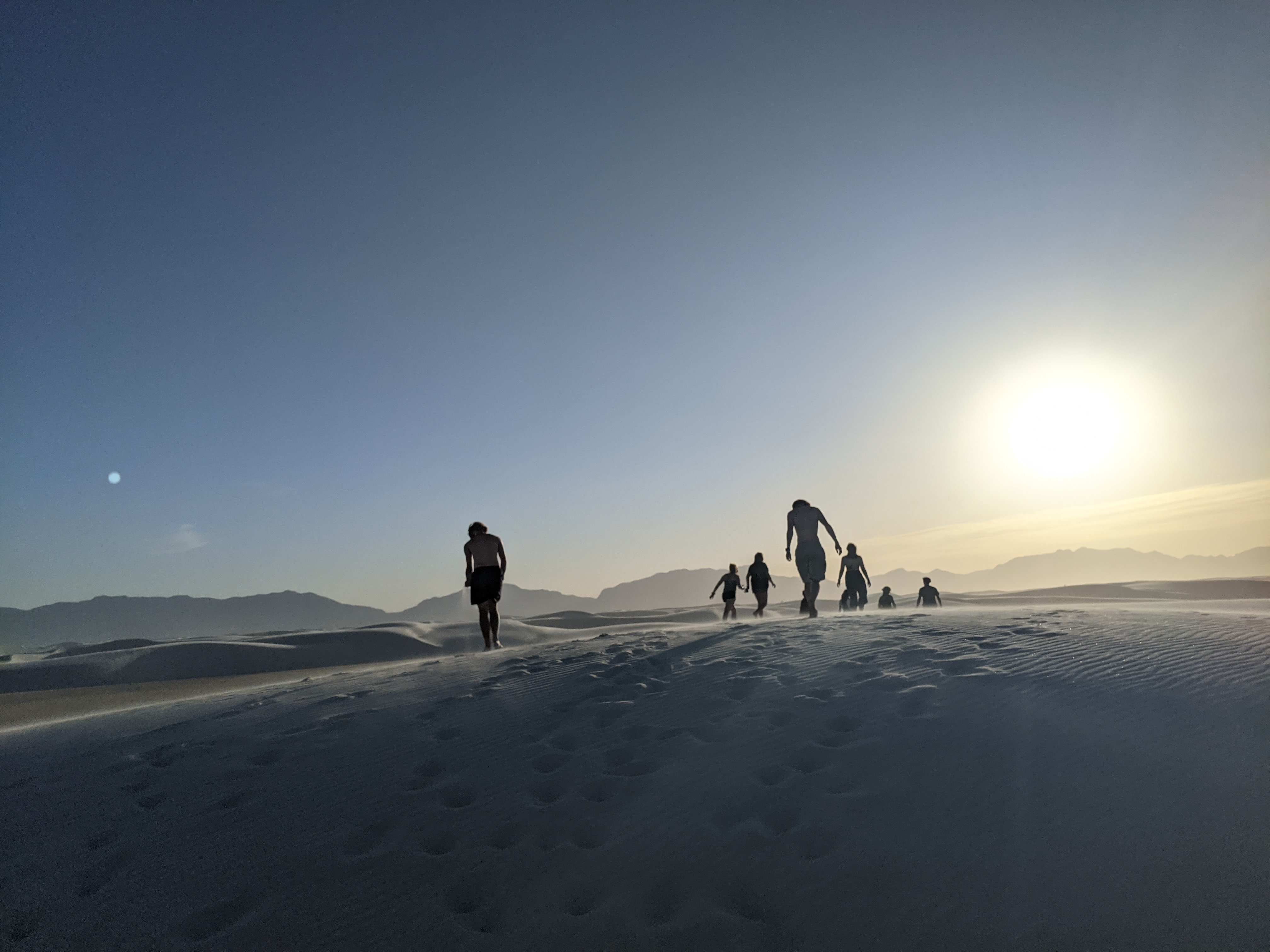 At around seven that evening it hit me that this here is our last night in the backcountry and that this type of solitude and immersion in nature in such a tight knit pod of people would be something that I know I will crave once I am back in civilization. I feel bound to this tight little group. Everyday my heart feels a bit heavier as the end of Mountain Classroom looms over our heads, ready to drop upon us and break the thick layer of solitude, separation, and freedom from the outside world. I took this thought and ran with it, quite literally, up the steep and rocky hill next to our campsite.

I ascended the hill until I reached the top one hundred feet above our city of tarps I grounded myself by closing my eyes and listening to rocks fall below me clinking against each other before coming to a halt, the powerful thrash of a raven's wings in flight, and the sweet chorus of songbirds calling out to one another and whizzing by my head. The sun had begun to set upon the forest, and the never-ending hills standing behind me lit up in a golden hue, the distant canyon walls illuminated with a sharp golden line of daylight kissing the canyon goodnight. That moment felt like the right time to say goodbye to the sensation of being completely alone in such a wild area, which for me was very difficult. I parted ways with the land after gracefully walking into a cactus. 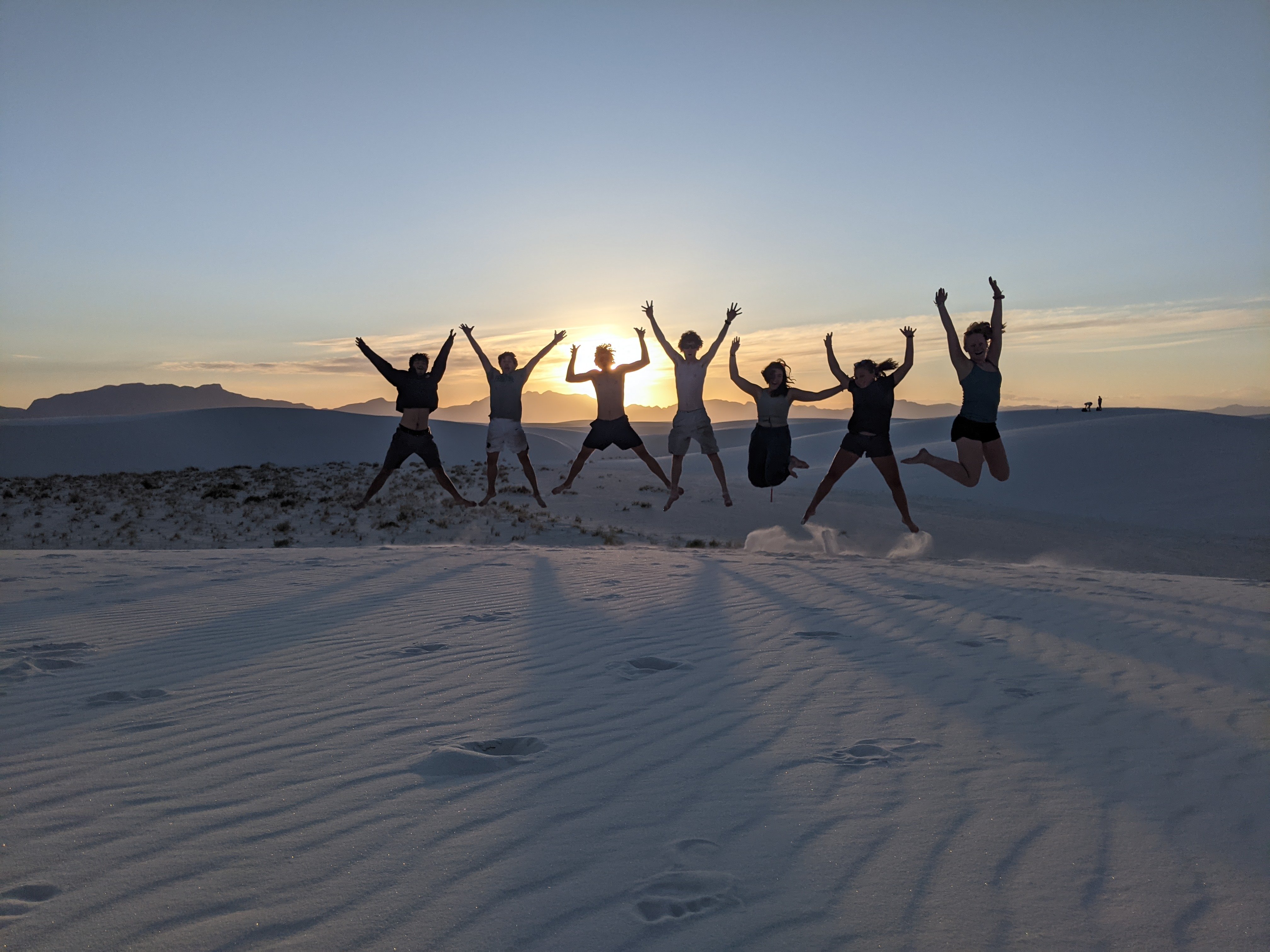 I returned to our group and celebrated our last night of backpacking by sleeping in the middle of the trail under the stars (it was the only open flat space to look at the sky, sorry early morning hikers!) savoring the wilderness. I was the leader of the day the following morning, which was very relaxed and slow moving due to a necessary sleep in. Our navigator had mistakenly over-calculated the distance we had to the trailhead, so we ended up hiking a mile and a half until we met Quinn and Erica at beloved Deb after passing a few scorching hot springs on the way out. This evening we head to White Sands National Park in Alamogordo, New Mexico, for the sunset, and are mentally preparing ourselves for another four in the morning wake up to begin our drive across the country back to New Hampshire.

See you in nine days,