Mountain Classroom is spending our spring studying food. We started the term by getting our hands dirty on the Midland School’s farm in Los Olivos, CA. Ranch Manager, Nick Tranmer, was our gracious host, as we camped out in a beautiful field nearby campus, before heading into the San Rafael Wilderness for a first aid themed backpacking trip. After backpacking we returned our thoughts to food systems by visiting Duncan Family Farms, a large-scale organic farm growing salad greens in New Cuyama. Now we are en route to the Colorado River for a canoeing trip in the Black Canyon below the Hoover Dam.

Rain, wet feet, heavy bags, jet lag, and emotions. All of these played roles in our first day of Mountain Classroom. We were excited to arrive at the Santa Barbara Airport even though it was raining heavily. As soon as I got on the bus, I was asked to hand my technology in to be put in a locked safe. “No more social media. No more Wifi and no more technology in the next 10 weeks. This is it…” I thought as I turned off my phone and gave it to Coco. What seemed scary at the moment turned out to be one of the best decisions I’ve made. 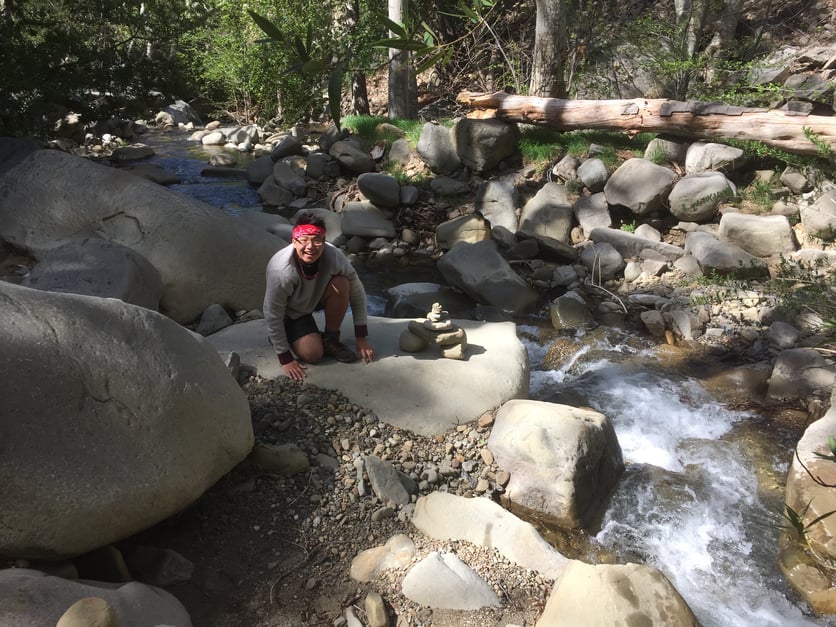 There are eleven people in the Mountain Classroom community, however, for the first week we hosted a special guest and past Mountain Classroom instructor, Chris Farrell, who is now a math teacher at Proctor. We headed to a big grassland with tons of white sage and live oaks, which is owned by the Midland School. Midland is a boarding school in California with all 80 students living on campus. The school has a farm that grows asparagus, scallions, spinach, beets, lettuce, strawberries, and more. They even raise their own pigs and cows. The school dining hall is supplied in a large part by its farm. Nick Tranmer, the farm manager, gave us a tour. Nick was a ceramics teacher for twenty years until he decided to become a farmer two years ago.  Even though Nick considers himself a newbie to agriculture, he is confident in his farming techniques. Nick used a lot of agricultural terms throughout the tour, which I was not familiar with. However, the words excited me and I wanted to learn them all.

To return the favor, we helped Nick weed the strawberry field. We put on our sunscreen and started working. The sun was high and so were our spirits. We weeded from the first field, to the second one, onto the third, and then the final one. Some of us were sunburned. Some were tired. Our clothes were dirty. But we were having fun. It was our first group project. 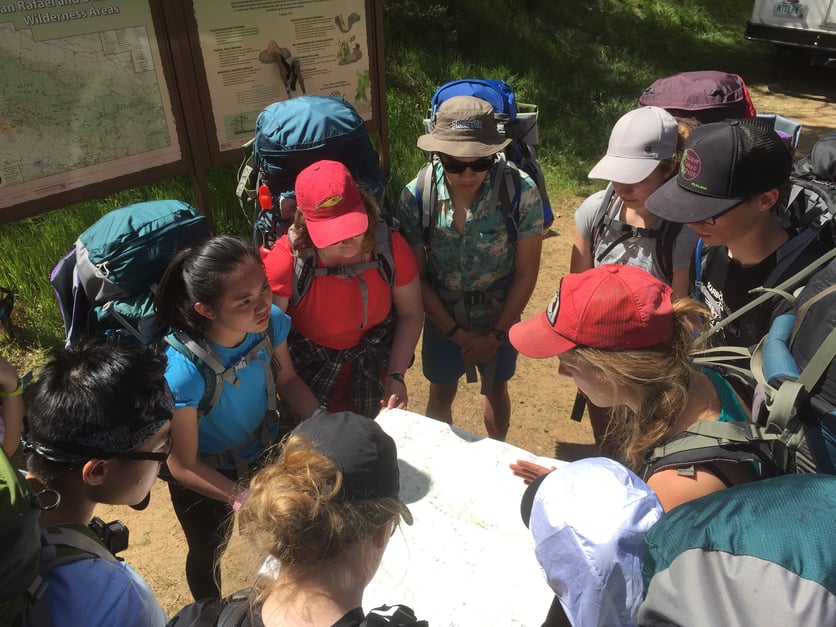 Spencer ’17: An Introduction to Backpacking

On Friday, March 25th, our Mountain group ventured into the San Rafael Wilderness and embarked on our first backpacking journey. In the morning we packed our backpacks, put on our hiking boots, re-re-re-applied sunscreen, and departed from the Midland campsite.  Our bus drove in and out of the mist as we climbed up the winding roads to the trailhead. All of us turned our heads toward the mountains. We were awed by the breathtaking view of the never-ending greens decorated with the bright orange California poppies.

At the trailhead, we had a lesson with Coco on how to pack our backpacks before we all marched into the woods. One thing we’ve learned from Mountain is that our learning experiences will not be limited by geography. Everywhere can be our classroom and we’re on a journey of constant learning. We learned how to set up our tents on a grassy knoll; we learned expedition skills by the trailhead; we discussed food policy by the beach; and we took Wilderness First Aid (WFA) by a bubbling creek.

Four days in the wilderness was a reminder of the world outside of the concrete jungle, at least for me. It took me back to the simplest and the most natural way of living. I feel so incredibly lucky to have shared this amazing journey with some of the kindest and most brilliant young minds I know. During these four days, a group of nine teenagers (five countries represented) mastered making a splint, became more open with each other, and were reminded of the grace of Mother Nature.

The landscape changes dramatically driving away from the Pacific coast. As we travel farther from the moisture of the ocean, the lush hills covered in sagebrush where we started the term give way to a desert landscape of dry shrubs and sand, and an intensely blue sky blankets the horizon. In the middle of the sand and desert brush sits Duncan Family Farms, a family owned organic farm where we will be studying large-scale agriculture.

California produces around 85 percent of the nation’s leaf lettuce, and Duncan Family Farms is one piece of the state’s enormous agricultural industry. With 1200 acres of farmland in New Cuyama, California, they grow thousands of pounds of leafy greens every year. They are one of the largest producers of organic greens in the country, and their products, which consist mostly of baby greens like spinach and arugula, are sold in grocery stores across the western U.S. From the road, their fields stretch for miles, blending in with the neighboring farms and the ruddy sand of the desert, but Duncan Family Farms is a unique operation among its neighbors. They are committed to growing their food completely organically, from soil to sale, meaning that they do not use any synthetic pesticides or fertilizers on any of their fields or plants at any time. The word “organic” is often stretched to cover a variety of connotations in different topics and different contexts, but an in person look at what it means at Duncan Family Farms gives it a much more tangible definition.

As we step on to a square field bordered on two sides by pine trees, Ben, the head production manager at Duncan Family Farms, explains how he and his team carry out their vision of organic farming. In the absence of synthetic chemicals to kill pests and give the crops nutrients, they must carefully nurture the soil as well as the plants. Commercial crops are only grown seasonally, and in the off season the fields are filled with cover crops to help the soil regain nutrients, such as nitrogen and phosphorous, that crops need in order to grow well. Cover crops are usually legumes or grasses with deep roots, and they “fix,” or produce, nitrogen with the help of microbes that live on their roots. In addition to supporting the health of the soil with cover crops, a mixture of manure and plant material is spread on the fields as fertilizer, providing extra nutrients for the plants and encouraging the growth of healthy microbes in the soil.

While learning about this holistic model of farming, which prioritizes the health of the overall ecosystem in addition to that of profitable crops, it is easy to forget that Duncan Family Farms is a business. It is a corporation, which is designed to make money, and it accomplishes this very efficiently, just as many conventional farms do. It deviates drastically from conventional farming methods, though, and this is where my expectations clashed with reality. Conventional farms follow a nearly industrial model, using raw materials—seeds, fertilizers, and pesticides—to produce a good, and by maximizing the speed and yield of this process they increase profits for them and their shareholders in a neat capitalist process. By emphasizing both sustainability and efficiency, though, Duncan Farms defies what is often presented as a purely oppositional relationship between environmentalism and capitalism. Even after visiting such a large and unique operation in person, I found it difficult to believe that those two principles could be pursued simultaneously. I am now convinced that they can coexist, however, and that their union will be a central component of the future of our food.