Proctor's Mountain Classroom has reunited following winter break and has begun their westward adventure after reconvening in Albuquerque, New Mexico. As the group heads out on their next adventure, we journey with Sophie '21 and the group back to the Okefenokee Swamp during their mid-December camping trip. Enjoy and check back soon for another update from Mountain Classroom Winter 2020!

The rain pounded on my tent as my alarm beeped at 5:15 am. In my hurry to get ready the night before I packed my raincoat in the bus, knowing full well that it was going to be raining when we woke up. I groggily packed up my sleeping bag and made a mad dash to the trailer through the puddles that had been forming all night.

A breakfast of grits were made and taken on the bus to eat on our ten minute ride to Okefenokee Adventures. There we met yet another Alex. He helped us with getting dry bags for our tents and showed us how to pack the canoes. We would be spending the next three days and two nights in the Okefenokee Swamp. With the five canoes, one kayak and one very lively and enthusiastic guide named Chip, we pushed off the shore and headed into the swamp. I had never steered a canoe in my life and wow it was hard to figure out! I kept zigzagging my canoe back and forth across the channel. Chip was very patient and waited back until I sort of got the hang of it. Our plan for the day was to paddle eight miles to our “campsite” and then have a few quick lessons once we got there. About three miles in we heard people shouting from a distance. We couldn’t make out what they were saying, but it sounds like help. Chip had just finished telling us a story about his friend, also a guide, who had gotten lost in the swamp for five days. He couldn’t just keep paddling away from the shouts, so we all linked boats and Chip went off, looking majestic standing up, his ponytail and beard blowing in the wind and rain, paddling to the rescue. We took this opportunity for a lunch break. About an hour later he came back. What I got from his explanation was no one was in trouble they were just bringing him his phone he had left charging back at the Adventure center. 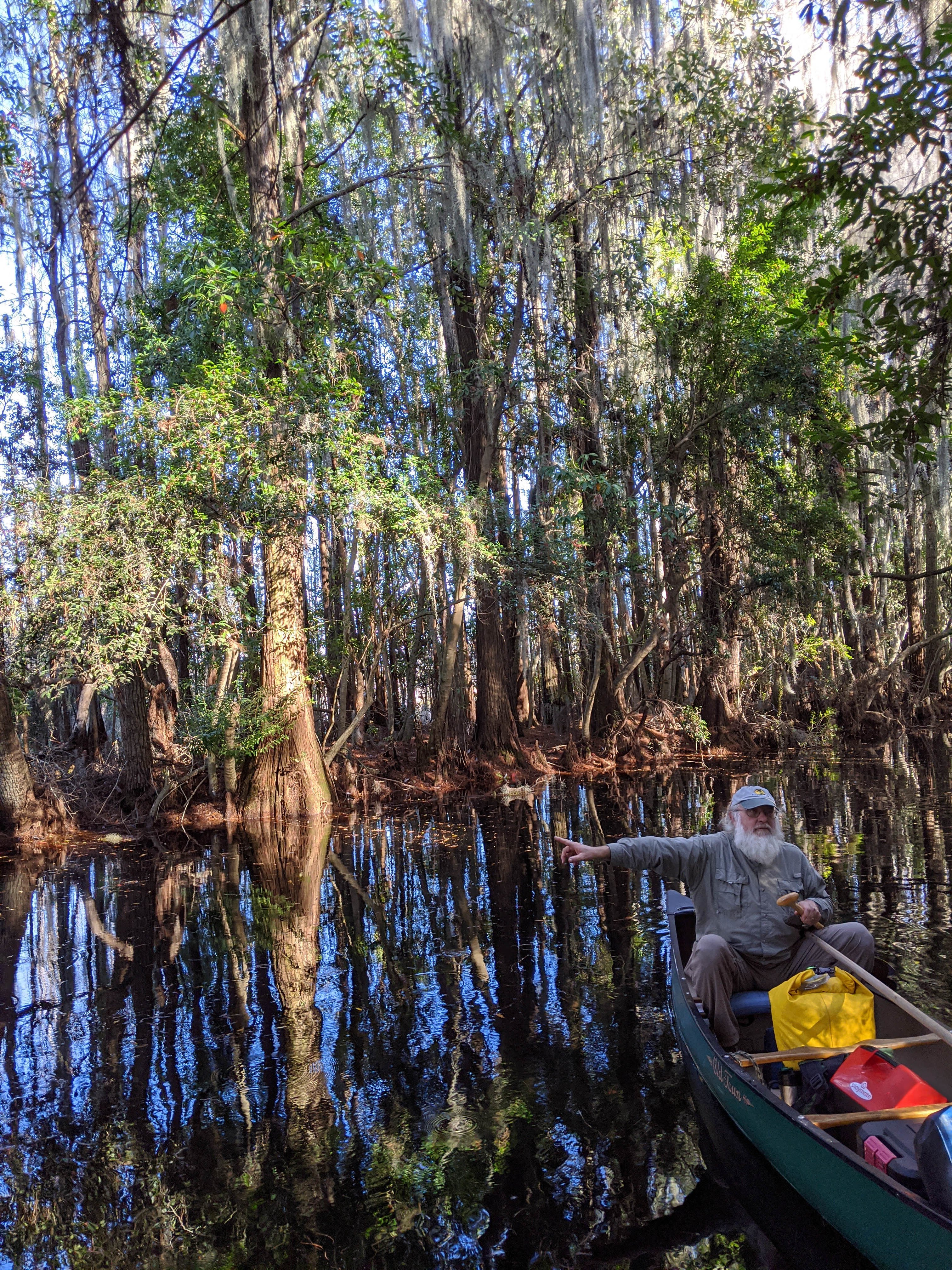 With only one kayak, we all took turns. I switched with Alex C. after lunch in the middle of the swamp. It was a little sketchy getting in, but once I was seated it was smooth sailing, or should I say smooth kayaking the rest of the way. I decided to stay back and take in the scenery. I got to talking with Chip about the swamp, how it's being affected by climate change and if there’s a noticeable difference in the swamp from the effects since he started working there over 20 years ago. Chip has this wealth and depth of knowledge about the swamp like no other. The remaining miles passed quickly while talking with him. Before I knew it we were rounding a corner and there before us was the platform we’d be staying on. At first glimpse I thought ‘there is no way we can fit 12 people on here.’ After docking all the boats we climbed out on the little dock and behind it was a raised walkway to the bigger platform covered by a roof of sorts and a picnic table to one side.

Tents were set up and lessons were given. In the free time that followed we got work done and just talked. After a dinner of pasta with broccoli, peas, and red sauce we had evening meeting where we learned we would get to sleep in until 8:30! Pretty much an eternity for us.

I woke up in the middle of the night to rain, thunder, and bright flashing lightning. Normally this would’ve freaked me out, but I was too tired and knew there was nowhere else I could go so I feel back asleep. I woke up in the morning feeling more awake than ever before. After a quick breakfast of grits, again - this time sweet, which Erica swears doesn’t exist, but all of us were pretty happy with honey and cinnamon in them, we started out. The sun was finally peaking through the cloud cover as we started our second day of paddling, only 7 miles to our next platform. We past a bunch of little alligators along the way, most were just sticking their nose and eyes out of the water, but we saw one fully laying out on a bank. Lila and I had a great time paddling along at our own pace singing Taylor Swift and other random songs for entertainment. Even if our group wasn’t a huge fan of our performance, I’d like to think the Gators and turtles enjoyed it.

We had a quick stop at this bank that was made of solid ground to stretch our legs, go to the bathroom and switch out the person in the kayak. Chip explained to us that back in the 1890s when they were trying to drain the swamp they dug so deeply that any places they dumped the sand and mud built up and created real banks. Almost all the “ground” we thought we were seeing was actually just peat moss and if we were to step on it we’d sink down to at least our waists. We continued on, now with my new boatmate, Ben. I didn’t really know Ben before this so it was nice to get to know him a little better and talk about one of our shared interests - rock climbing.

The new campsite looked like something straight out of Jurassic park. The trees surrounding were covered in Spanish moss giving everything an eire vibe when the sun went down. The sunset was gorgeous and we took it in while doing some work. After dinner of, once again, pasta and red sauce, but this time with sausage, a few of us sat on the edge of the platform to star gaze. With no artificial light anywhere nearby the stars were brighter and more prominent than I’ve ever seen them before. I ducked back under the roof to clean my bowl when I heard Quinn and Cameron gasp at the shooting star they just saw. Apparently it was so big and bright Quinn thought for a minute it was possibly the end of the world. We had our evening meeting watching the moon rise and the star slowly disappear.

The fog coming off the water mixed with the morning sunlight gave the swamp a beautiful glow. We packed up efficiently and were ready to go pretty fast. Chip was cooking himself some breakfast - venison and boar sausage - both animals he killed himself and made the sausage. He let us try some of it, I’m not a vegetarian, but I never thought I would eat deer. They’re so cute, but damn it tasted so good.

In our six mile paddle back to the Adventure center we passed countless alligators, this time most of them were out of the water so we could see the whole body, and a few turtles. We rounded the last bend and saw the Center. A wave of relief and sadness washed over me. After unloading the boats I walked towards the gift shop and stopped when I came across Cameron laying on her stomach on the edge of a dock looking into the water. Right in front of her was a little alligator sleeping. I layed down next to her to get a better look. I looked over at Cameron and said ‘I really want to poke it!’ she agreed, Erica on the other hand didn’t think it was a good idea. Of course I wasn’t actually gonna do it, but it would’ve been a story. Driving away I looked back knowing I’ll be back again someday.