Eight weeks ago, twenty-one Proctor Academy students boarded the Schooner Roseway in Gloucester, Massachusetts on a perfect September day. Family and friends waved goodbye with tears of hope and pride creeping down their cheeks. They knew, as did the students aboard the Roseway, the experience that lay ahead would be transformative. As program director Dave Pilla told families aboard the Roseway in September, "Your sons and daughters will return changed."

The student growth aboard Ocean Classroom comes in many forms. Physical strength is built as lines are hauled. Emotional independence gained as midnight watches are completed and communication with home limited to two phone calls and written letters. Social skills refined as cramped quarters are shared with peers who may or may not have been close friends prior to boarding the Roseway in September. 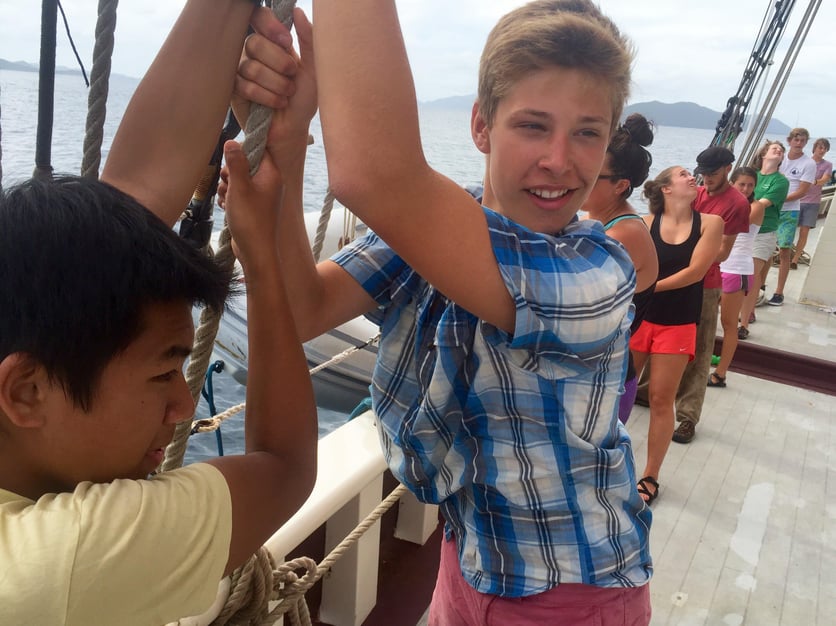 This growth does not happen right away, but rather is a gradual process over the course of the term. And this is what makes it so powerful. Students will get off the plane from the Caribbean this weekend and run to their family and friends with open arms. It will be at that moment, when objective eyes and ears hear from a transformed student that the depth of growth will be realized.

Enjoy student journal entries and a research project that evolved into a poem below!

Today I went snorkeling, an experience unlike any I've had. I started into the warm waters of Cane Bay with my flippers, snorkel and mask. I fumbled with my flippers, put on and tightened my mask and I was off swimming about in the shallows. After everyone was ready we headed off to the buoy where one of the reef restoration project sites were. The first 100 meters or so were no more than 4 feet deep and there were many black sea urchins we were warned about. Because of this we couldn't rest, and let our feet sink to tread water. At this point, I was very much still getting acclimated to my snorkel gear. My mask wasn't sealed entirely, my breathing device was positioned poorly, and at that point I wasn't so sure about snorkeling. I took a quick second on the life ring that Matt was towing and situated myself, and resumed swimming. At this point I was beyond the point of freaking out, my breathing had stabilized. I was ready to go. The sea floor had dropped off and it was now 10-15 feet. There were small fish all about the sea floor, it was incredible.

Shortly, we were at the coral reef restoration site, able to see the branching corals growing from PVC piping. I watched others dive down, but didn't decide to dive down myself. After looking at the smaller coral beds we proceeded to the larger coral trees. We were instructed how to dive deep without hurting our ears. I then dove down, held my nose, and blew out the pressure built up in my ears. I was able to keep swimming down without my ears hurting. I got a good look at the corals that were growing and the fish around them. We hung around the reefs and dove about investigating the various fish and life on the bottom. We thoroughly investigated the reef trees and decided to head back towards shore. I dove down a few more times on the way back, and as I was swimming along I saw a sea turtle! I followed it around for a few minutes, investigating the pattern of it, and quickly realized I'd meandered far away from the group. I made my way back to the shallower water enjoying the small fish and various critters as I went. What a magical experience.

Looks can often be deceiving. Such is undoubtedly the case in the St. Croix East End Marine Park. When the bus turned onto a dirt road in the middle of a field, I found myself wondering if perhaps we were truly in the right place. However, the bus stopped in front of two ramshackle old buildings and we were told to disembark, so we did, shuffling along in our backpacks and water shoes, desperately searching for the beach I thought to be our destination. We found that the beach assumption was only partially correct; we were still visiting a beach, but not to swim or tan like we had hoped No, Proctor’s Ocean Classroom had come to this particular beach to learn.

Our teacher was the comedic caretaker of the grounds known as John, who was much more knowledgeable about the shores of St. Croix and the fishing economy than anyone we had yet to meet on the island. When John spoke, his passion and humor conveyed a deep–seeded need to educate the youth of the world about the health of our planet, our oceans, and the creatures that dwell within them. John drew from a vast memory base, launching information at his students that ranged from the economics of pre-colonial St. Croix to plate tectonics to expansive descriptions of local sea based flora and fauna. Punctuated both with humor and distant, dark statements about how we, the students, must work to be the change of behavior we wish to see in the world, John brought us a perspective on the oceans that strove to bring to light a point many of us understand yet silently ignore; our ancestors caused the damage to this planet, but the actions we choose are choices, and thus, they are something we can change. Even if it is one student at a time we, as a species, can change our actions to save the world that is our home.

JoJo did her final science project on sargassum's variation as we traveled south. Here is a poem she wrote as her final presentation of her project:

Sargassum's pretty neat / It likes to tickle my feet

It won't drag me down to a pit / Here's how to identify it:

Fluitans blades are short and broad / Floats don't have a spike, they are not frauds

Sargassum other has yet to be seen by me, / If I see it I'll say oh my gee!

It's green and brown and smells kinda gross / Even Scott wouldn't want a dose.

Even though it's all kinda strange, the way it helps the ocean has a wide, wide range.

I used to hate it and would scream / But now when I see it I have a beam.

All I ask is that you give sargassum's a chance, / In the end all it does in enhance.