The frequency of Ocean Classroom posts will vary throughout the term as port stops and access to wi-fi dictate much of our communication plan. With a few days in Norfolk, we decided it was best to double up on posts this week before Proctor's crew aboard Roseway continues their journey south to Charleston, South Carolina. Enjoy this portal into Ocean Classroom 2017! 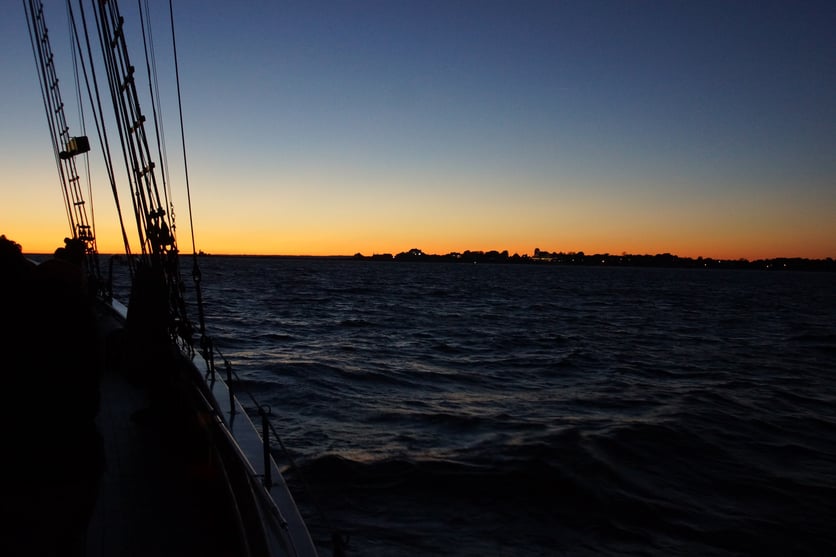 Today we sailed off the coast of New Jersey. Although there was not a cloud in the sky, that could not stop the Roseway from getting wet! While for the lucky few that had the day off today, their day was filled with hours of long naps. Others were on watch, in navigation class, reading literature in class, or watching the elegant whales swim by the starboard side of the boat! As every day on the Roseway, everyone learns something new. For the girls, we learned about new uses for baby-clippers…they stop the leaks on your ceiling from making puddles upon puddles in your bed. We ended the 14th day aboard Roseway, watching the sunset on Atlantic City. This was yet another day that was filled with heart, hard work, and laughter. Everyone is excited to see what the 15th will bring to us and to wake up to another amazing breakfast!

A rather frightening day about Roseway it was. While the seas had calmed and the vicious vomiting came to a temporary halt, we were not able to let our guards down. At about 1300, Roseway experienced an arthropodal attack. All was well when suddenly a mutant demon wasp boarded the ship. This flying six legged creature, which at the time resembled a small dog in size, was unlike anything anyone aboard had ever seen. Once captured, there was much debate over what should be done with the prehistoric winged creature, many were in favor of slaughtering the beast on the spot but controversy arose when the more kindhearted folks aboard opposed its execution. As usual, the long-haired, spartan engineer looks matters into his own hands by discarding the demon wasp overboard using a bucket of water. Finally we were safe. Or so we thought. Nearly an hour past, during which almost everyone aboard took advantage of the warm weather by throwing on their bathing suits and indulging in a refreshing bucket shower. Little did they know that they were only further exposing themselves to the winged predators that lurked above. Again the peace was disrupted when another beasty boarded, this time infiltrating Brian’s precious array of spices. Seeing that the critter being indoors only elevated the risk of attack and the thought of stabbing Michelle with an Epipen in order to prevent her from going into shock sounded like a rather unwanted scenario, I knew it had to be taken care of quickly. With an empty spice container, I slowly crept up on it and with a flick of the wrist, I secured the monster and after it was released back into its element.

Other than the craziness of the winged beasties today, students had another day full of learning and fun. We entered the Delaware Bay to provide potential safe havens in the event of foul weather due to Tropical Storm Nate, had science class where students learned about estuaries, literature class where students continued to discuss “The Boat Who Wouldn’t Float”, and had an all hands muster where Captain read “Youth” aloud before dinner. Roseway anchored in the bay and will head through the C and D Canal tomorrow to continue on our voyage to Norfolk.

We left our anchorage after chores this morning and made way for the Chesapeake and Delaware Canal. As we motored through the canal, students had navigation class with Miss Young where they learned “rules of the road” and history class with Matthew where they learned about the significance of nautical flags. Each watch will design their own flag to fly during each of their active watches! We made way into the Chesapeake Bay and will continue to head for Norfolk.

Being aboard Roseway is a magical adventure in and of itself. But personally I think the friendships we make and the way we express our love and appreciation for each other is even more magical. There are many people on this boat that I have never spoken to or even seen on campus before this adventure. But after being on this boat for only 17 days things have completely changed. Tonight was Sunday dinner which means everyone gets dressed up in the best. It is the third Sunday on the boat and already almost everyone has caught on and is participating. As the last few people made their way into the salon, everyone whooped and cheered. You could feel the happiness and love flowing through the room. Then later in the night as some were getting ready for bed or getting into their night watch, I was climbing out of the fo’c’sle on my way to write this log entry and I was pulled into a circle of people singing and playing the ukulele. Circles like that are not a rare occurrence aboard. Everyone putting their arms around each other, with the circle growing bigger as more people join and sway to the sound of a ukulele with all of us singing our hearts out.

While being on this boat, my watch (B watch, also commonly known as “Brick Squad”) has gotten ridiculously close ridiculously fast. Not only the students in the watch but the deckhands we work with, Cara and Will, and our mate, Miss Ordway. Today we had the announcement that the watches were going to be rotating through watch leaders and I know I was close with these wonderful people, but I didn't realize how close until I learned we wouldn't be spending 10 hours of our day together. But as hard as it is to leave a comfort zone, I am eternally grateful for getting to spend my first two and a half weeks of this journey learning from these talented people, and I am excited to continue making strong bonds like this with other students, deckhands, and mates. 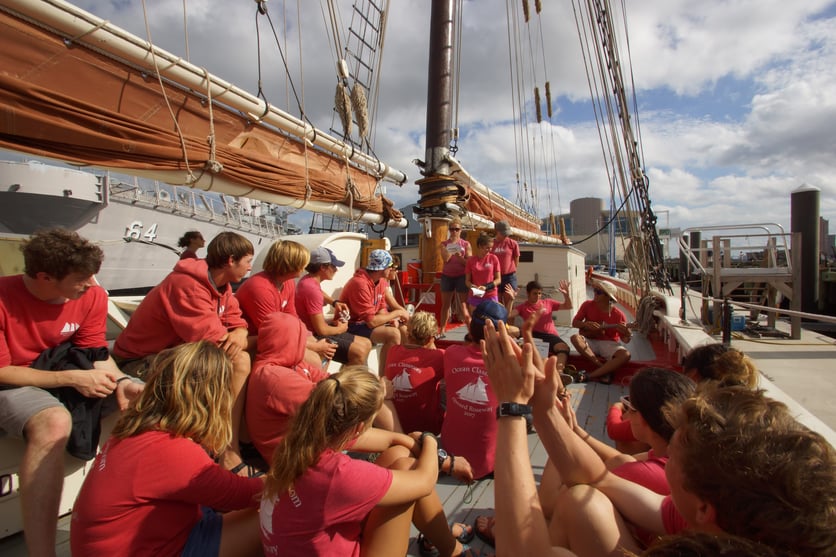 Hello all. Today started off with an early morning watch. It wasn't too bad, the usual. The weather was slightly overcast with the occasional sprinkle of rain. It was really windy though. I wish we had a laser or 420 to sail too!

We finally arrived into the harbor around 1. The harbor is called Hampton Roads and is home to the largest naval base in the world. Going past all the battleships was really amazing. After we got into the harbor and got docked, we went to a laundromat. It was really nice to be able to wash clothes. It was a long walk and it was really humid. When we got back we had some delicious pasta. The view while eating dinner was of a giant battleship (the Wisconsin) docked right near us. Right now we’re all laying in hammocks on deck! 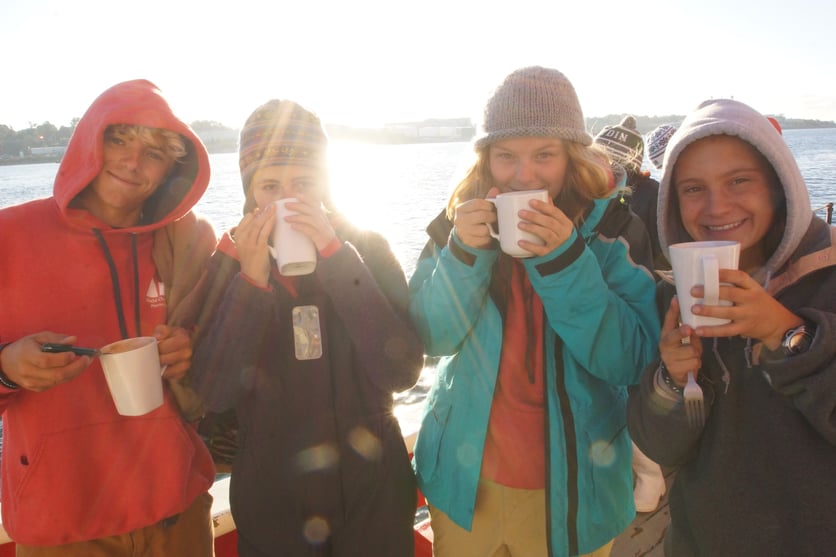 Today in Norfolk, VA a lot of fun was to be had. We went to one of the nicest parks I have been to. It had a huge grass field that felt like a pillow walking on it after getting used to the hard deck of Roseway. A lot of us played football and frisbee. We also had some jam sessions to the only two songs we know the lyrics to. It started raining while walking back to the boat. It was nice because it was way too hot in Virginia. We went to the Nauticus museum which was super nice. I was clean and hands-on. One of my favorite exhibits was seeing the guns they actually shot. Then we got to go on the Wisconsin Battleship. Roseway is docked next to her and it makes me feel so small. We did a history scavenger hunt and met one of the men that worked there. He was a retired captain! We had a last meal as our current watch groups. Our watch went out to an Irish pub and had a great time. Leaving C watch will be sad because we as a group have become super close with Miss Young, Becky, and Michelle. We will miss them even though they will never be more than 137 feet away. 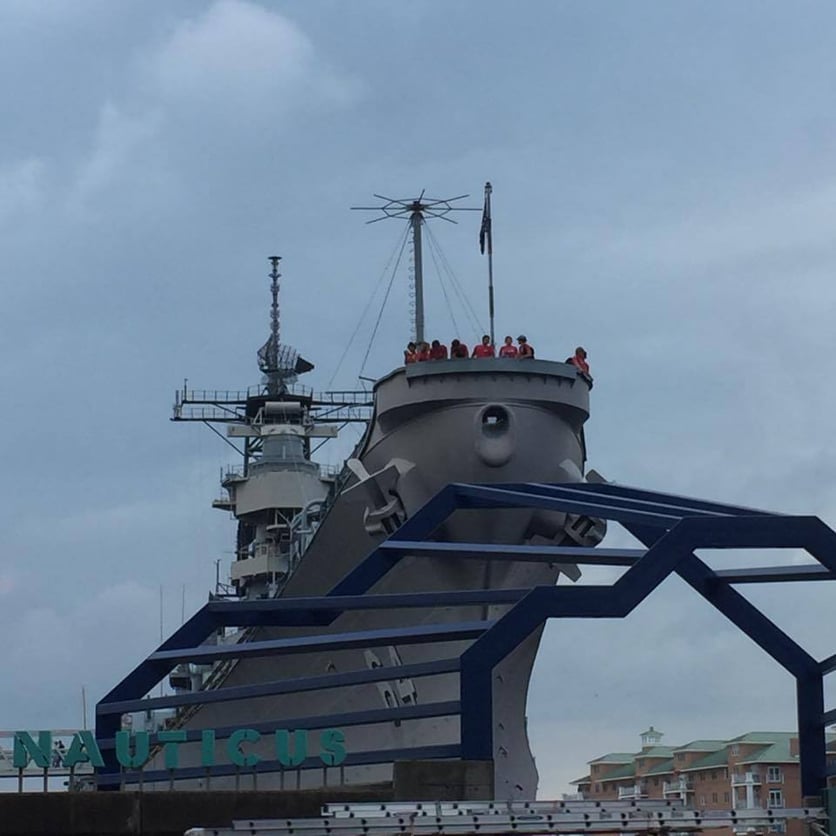