Greg Mickle ’96 knew he liked math from an early age. In elementary school, it came naturally to him, and as he entered high school, he knew he wanted to be an engineer. His journey through four years at Proctor and twenty years since made that dream come true, but he has found being an engineer is far more than working with numbers.

Born and raised in Andover, New Hampshire, Greg entered Proctor with a clear focus on taking as many math and science classes as possible. Since no one in his family had been to college before, he sat with his advisor, Tim Norris, during his ninth grade year and shared his ambitions. “Tim was so influential in supporting me in my goals, even though his own interests as a literature teacher were far from my love of math and science.” 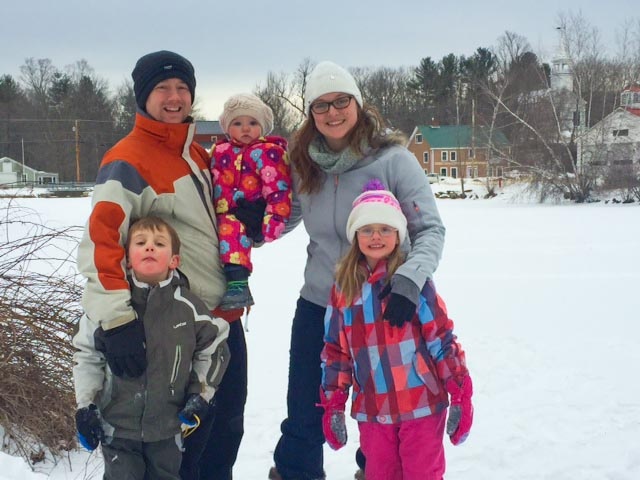 As his Proctor experience unfolded, he not only enjoyed math and science courses, but also took full advantage of woodworking and blacksmithing classes where he was able to work with his hands. While he did not know it at the time, these experiences with materials would prove invaluable as an engineer down the road. Following Proctor, Greg would matriculate to Worcester Polytechnic Institute where he would earn an undergraduate degree in biomedical engineering.

“I had a great experience at WPI, but it was wholly different than my time at Proctor. My professors were very good, I learned so much about engineering, and was incredibly well-prepared for the workforce because of WPI, but I lacked an emotional connection like I have to Proctor. At Proctor, faculty shepherded me through my education. They challenged me, questioned my rationale for the decisions I made, and showed me they cared about me as more than just a student. Perhaps it is just the way an engineering school runs, where everyone is an engineer and people are less socially oriented, but I missed that terribly about Proctor as I navigated college.”

As his college career wound down, Greg was offered a job with an oil and gas service company working on an oil rig in the Gulf of Mexico. “The first flight I ever took was when I was 17 years old, but after spending a semester in London in college, I was hungry for an adventure. The last twenty years working for my company have given me plenty of that!”

After four years stationed in the Gulf of Mexico, Greg moved to posts in Australia, Saudi Arabia, and most recently in Aberdeen, Scotland where he has lived for the past two years with his wife, Chelsi, and their three children (Lillian age 7, Oliver age 6, and Bronwyn age 1). Greg now manages two product lines for the company and utilizes the soft skills learned at Proctor as much as the hard skills learned at WPI in his daily work. “So much of Proctor prepared me for my current role. Required afternoon activities each term taught me to develop new passions, learn to focus, and manage my time. The diversity of people I interacted with at Proctor made me comfortable in new situations, with different types of people. Being surrounded by faulty who cared so deeply about me and my journey shaped my approach to my job with my team today. There is no ‘clocking in and clocking out’, there is simply getting the job done and helping those around you do their best work.”

It is when these two worlds collide, and you are able to gain experience in both realms and surround yourself with expertise from both ends of the spectrum, you see creativity and vision become a reality. “Now that I have been out of Proctor for twenty years (gasp), I have so much appreciation for Proctor’s approach to education. You are able to have more than one experience, more than one specialty. You can have an AP course one block and then woodworking the next. It is this mix of understanding both the theoretical and the physical aspect of learning that is so important for young people to experience. Proctor makes it happen, and does it so well.”