When was the last time you allowed yourself to follow your passion? We all have pieces of our lives that represent our passions, but few of us have the confidence to wholeheartedly throw ourselves into that which fuels our souls. Moriah Cowles ‘02 is one of those rare individuals whose life’s compass consistently points to true north: her passion for blacksmithing.

Moriah first heard about Proctor from her cousin, Merlin Backus ‘02, and one of her good friends from her hometown of Shelburne, Vermont, Sarena Stern ‘02. Following her sophomore year at her relatively large (at least by Vermont standards) public school, Moriah recognized she wanted something more out of her education. After hearing about Sarena’s upcoming Ocean Classroom adventure planned for the the fall of 2000, she investigated Proctor further and saw a school whose priorities were aligned with her own: small classes, personalized attention, and a sense of adventure. “When I arrived at Proctor, it was the first time I was able to truly ‘own’ my learning. My teachers were so inspired, they made me excited to learn and reinvigorated me to get the most out of school.”

While Moriah enjoyed all aspects of her Proctor experience, including countless art classes, forestry class with Dave Pilla, snowboard racing with Jim Cox, and cross country running, it was her Ocean Classroom experience (including a life-changing stop in Haiti) during the fall of her senior year that laid a foundation for adventure and travel that would guide her journey following Proctor. Moriah’s gap year after Proctor included two months in Ghana followed by four months in Nepal working, learning, and serving before she eventually matriculated to Colorado College in the fall of 2003.

At Colorado College, Moriah found a school whose educational philosophy and sense of community mirrored what she experienced at Proctor; a focus on experiential learning, inspired educators, and a flare for the eclectic. It was this unique blend of attributes that allowed her to further discover her passions. “I took my first blacksmithing class, Blacksmithing and the Art of Utility, at Colorado College because it was the only class I could get into. I think the class was only offered twice ever, but through this class I fell in love with blacksmithing.” She adds, “At the same time, I was (unsuccessfully) applying for a Watson Fellowship. The application asked what I wanted to be doing with my life, and I realized how deep a passion I had for the arts and I had never allowed myself to pursue it. I discovered myself through this process and saw there was something special about blacksmithing in particular - this unique role of art and function.”

Following college, Moriah returned to her family’s apple orchard in Vermont to work and take more blacksmithing classes; eventually buying herself a forge and borrowing an anvil from her family’s farrier. “Early on, I just kept trying to build new things, using any material I could get my hands on - old leaf springs from tractors on the farm - anything.” She traveled to North Carolina to take a blacksmithing class at the John Campbell Folk School and made a knife out of an old railroad spike. “I became very curious about knife making, and read as much as I could about not only the craft, but the chemistry required of using different types of steel and manipulating the elemental ingredients to make strong, beautiful knives.” 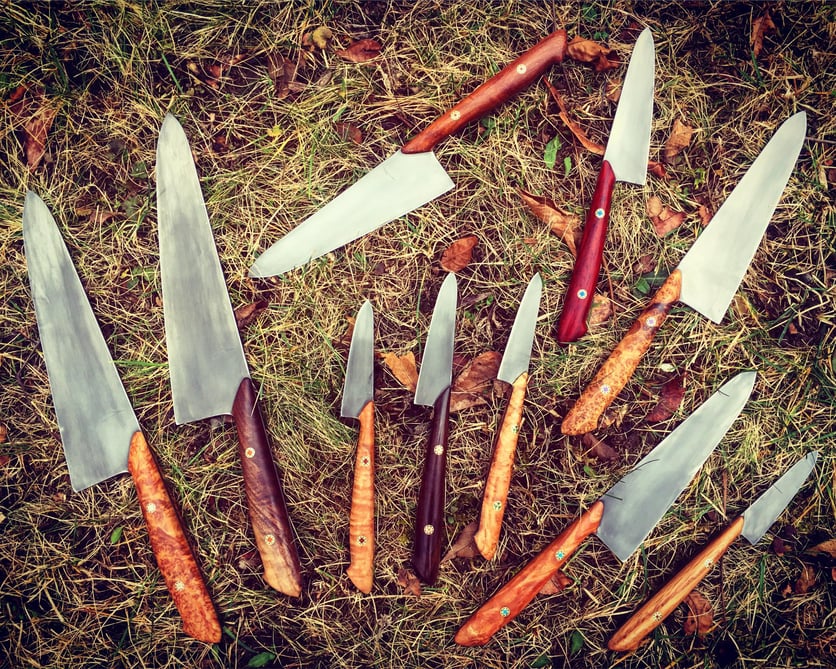 As she continued pursuing this passion for blacksmithing, Moriah happened upon the unlikeliest of opportunities to refine her craft during a bicycling trip through Mexico. “Early in the trip, I had this weird dream along the way that I would meet a knife maker. As we stopped at farms along the way offering our labor for a place to stay and some food, I asked if anyone knew a knife maker and I found this man who was an expert in the craft. I asked if I could apprentice with him and ended up working with him for six weeks. I learned so much, not the least of which was to be resourceful and to tap into the expertise of those around you.”

Moriah’s learning process continued once she returned to the states after she received an email from her hometown friend and fellow Proctor alum Abbi Stern ‘00 who had built her own jewelry business in Brooklyn. “Abbi connected me to a friend of hers who was running his own knife-making business in Brooklyn and needed help. I never thought I would live in New York City, but my two month internship with him turned into two years. I brought my forge and anvil to the city and learned so much during that time, until he eventually kicked me out of the nest and told me I should start my own business.”

After opening her own shop in Brooklyn, Moriah decided to move back to her family farm in Vermont where she opened the doors to Orchard Steel. “We are still small in scale, making no more than four or five knives a week, but I love what I am doing, and I feel like going to Proctor was this seed for me in going off the beaten path. Making that decision between staying in my public school, and going to Proctor, launched me into this world of people doing their own thing; building boats, off-campus experiences, kayaking, rock-climbing - it was ok to be different. Surrounding yourself with people who think outside the box allows you to have confidence in your creativity, and I’m so thankful I took that leap of faith when I did.”