For the past fifteen years, Proctor’s Mountain Bike team has been at the center of the sport’s boom at the high school level in New England (read more about the rise of mountain biking in New England here). Now with nearly thirty teams from Vermont, New Hampshire, Maine, and Massachusetts competing weekly, the Northern New England Mountain Bike league has become a mecca for high school cyclists in the Northeast with more than 400 riders competing each week. At Saturday’s league championships hosted by Gould Academy, Proctor earned second place overall as a team and garnered a number of first place individual honors.

Among Proctor's individual league honors were four young women who have carried the proverbial torch of female riders in the league previously held by Proctor alum Hazel Brewster '15 (now riding for University of Vermont). Dani Xu '18 earned first place on the season for all 12th grade female riders, while Kara Baird '20 earned first for all 10th grade female riders and Izzy Tonneson ‘20 earned 4th place. Kaia Schmid '21 dominated the girls' Class A category all season, earning first place in season points for all freshman female riders. Head Coach Josh Norris notes, "The role our girls have played in setting an example for other girls around the league has been incredible. Just four years ago we had only a handful of girls racing, and this year almost a quarter of the riders in the league, about 100 riders, were girls." In the video below, Dani, Kara, Kaia, and Izzy share thoughts on what it's like being a female in a male dominated league.

On the boys’ side, Chris Golden ‘20 earned second place in overall points for the season for sophomore boys riding in Class A, while Sam McDermott ‘21 earned first place overall in points for the season for freshman boys (Class B). Chris and Sam may have earned top honors for the boys, but as anyone who had the privilege of watching the team race this year knows, there is a great group of boys at all ages who are passionate about the sport and excited to continue their individual development. Norris notes, "All of the coaches in the league talked about how this season was extraordinary in the overall attitude of our team. We have a bunch of young kids who love mountain biking, are die hard bikers, and are passionate about all aspects of the sport. There is always a good turnout of mechanics at our Thursday night community bike workshop where kids and faculty/staff can bring their bikes and get them repaired, and the work our kids are doing on trail development each week is critical to teaching sustainable trail advocacy, trail building, and development of multi-use trails for our community."

This positive attitude within the team permeates to its coaching staff of Norris, Chris Farrell, Jen Summers, and Chris Grotnes who all share the students' passion for biking. Grotnes notes, "This years team has been most impressive because every single person on this team elevated and really improved their overall skills throughout the year. Everyone stayed positive and pushed themselves to improve each race." Summers adds, "I love so much that we are working alongside students to build a lifelong love for the sport of mountain biking.  Even though we compete and encourage our students to ride hard in the races, it is more about the team building relationships, having fun outdoors, and getting in shape in a way that you don't dread or feel like you are just working out to work out." 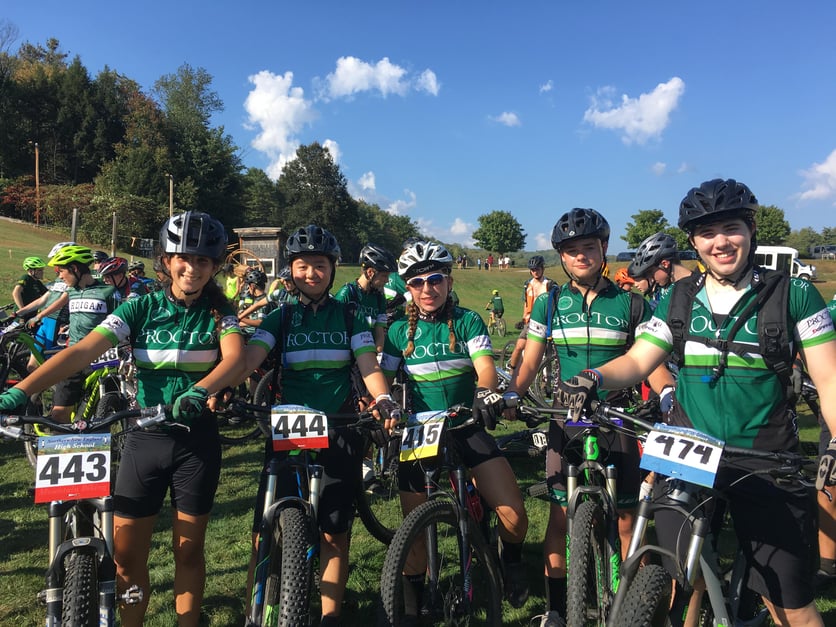 The enthusiasm for mountain biking at Proctor is not new, but its widespread growth throughout northern New England is due in large part to the success of the Northern New England Mountain Bike League. More and more schools are starting programs, and as league director, Norris is looking at ways to accommodate the remarkable growth the league is experiencing. "There is a big push by schools in Vermont to get another leg of the league going in the Burlington area, which would mean separating into a third division for the league next year. This is really exciting as we figure out ways to integrate all three divisions and continue to grow the league both geographically, as well as through new offerings like enduro races." He adds, "It's a logistical challenge for sure, but the benefit to the riders and to the school's to have a league in which to compete is absolutely worth all the effort behind the scenes running the league website, keeping spreadsheets of results, and helping support schools who are hosting each week's race."

While the 2017 mountain biking season is just about over, students and coaches won't have to wait until next September to ride again. Not only are the miles of trails on Proctor's lands open for use all year, but the team is starting to plan a second summer training trip where current riders and coaches will hopefully connect with alumni riders out west. Congratulations to the mountain biking team on a great season!