Proctor Academy's boys' hockey, girls' basketball, and boys' basketball teams have earned the opportunity to play in the NEPSAC Tournament for their respective classes this week. Each of the teams will play their NEPSAC Quarterfinal game at a neutral site on Wednesday afternoon at 4:00 PM as they seek a run at a New England championship. Read on for details on each of the teams and their tournament chances and links to Livestream video of games!

Proctor's boys' varsity hockey team had perhaps the most unlikely path to a NEPSAC tournament bid as they appeared to be on the outside looking in before this weekend's heroics in the Lakes Region Tournament. Trailing 0-4 after the first period on the road at New Hampton School in the Lakes Region semi-final, the Hornets looked to be on the ropes, especially since they had just lost to the Huskies earlier in the week 1-9. But five unanswered goals to start the second period, including a hat trick in a 2:00 minute span by Tate Singleton '17 shifted momentum and propelled Proctor to the 7-6 overtime victory. The train kept rolling into the Lakes Region final as the Hornets easily handled a strong Tilton School team (7-3) after the Rams had upset the #1 team in New England, Kimball Union Academy, in the other semi-final. As a side note, a remarkable five (of seven) Lakes Region boys' hockey teams made NEPSAC Tournament play this winter!

As the Hornets head to Williston North Hampton School for a 4:00 pm tilt versus #3 Avon Old Farms Wednesday afternoon, they know they will need to be firing on all cylinders as the perennial hockey power, Avon, will be one of the team's most difficult challenges of the season. Head Coach Mike Walsh and assistant coach Ian Hamlet recognize the difficulty of the road ahead, but also have confidence in their team's ability as they have already upset one of the top teams in New England this year when they defeated Lawrence Academy 3-0. Be sure to follow the boys' hockey team on Twitter during their playoff run! 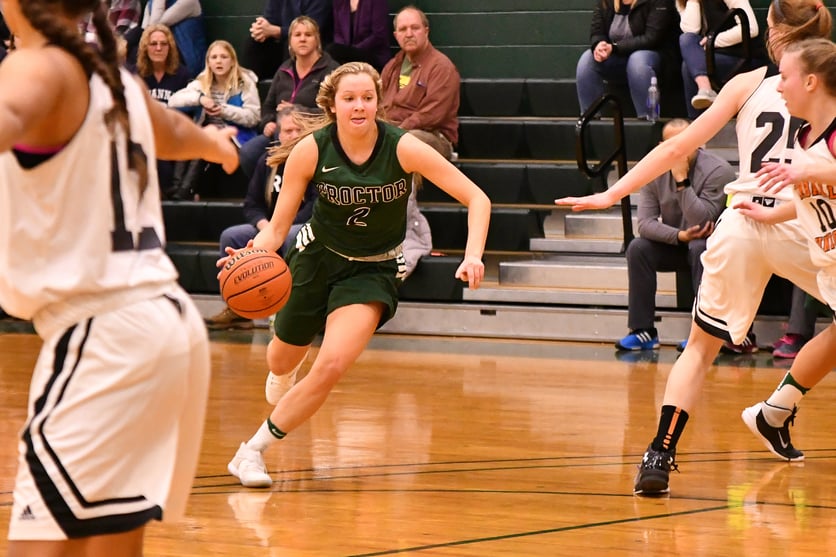 Playing into the month of March is old-hat for Proctor's girls' varsity basketball team, as the team is making their fourth straight trip to NEPSAC tournament play, including last year's run to a New England championship! The inside/out combination of senior Amanda Torres and sophomore Angelique Ngalakulondi have powered the Hornets to a 16-6 record and a #5 seed in NEPSAC Class C. The first obstacle to defending their title is a Watkinson School (Hartford, CT) team whose performance throughout the year illustrates their ability to win tough games.

Coming off a hard fought 60-66 loss to the top Class B team in New England (Tilton School), first year head coach Junior De La Hoz and assistant coach Lindsay Brown '01 have confidence their team is well-positioned for a playoff run again this year. With all but two members of last year's championship team back for this year's run, Proctor will lean on its young, but experienced core to lead the way. The girls will host Watkinson School at Williston Northampton School at 4:00 pm on Wednesday afternoon.

Four years ago, if you were to ask boys' basketball head coach Gregor Makechnie the likelihood of his team earning a top seed in the NEPSAC tournament, he would have said you were dreaming. No stranger to New England titles (Proctor won a NEPSAC championship in 2001 and lost on a buzzer-beater in the 2006 finals), the Hornets have had a long-road to this year's success. During a three year stretch between 2011-2013, Proctor's combined record was 3-75. Through hard work and commitment from this year's seniors, the program has returned to its historic success and looks to make a statement that Proctor basketball is back!

Entering the tournament with a 17-6 record, Proctor's 80-88 loss to Tilton School Saturday night dropped the Hornets from the #2 seed they had held most the season to the #4 seed and a neutral site match up with a talented Cheshire Academy team who finished the season at 19-7. Proctor will travel to Cushing Academy for the 4:00 pm game on Wednesday afternoon. The game will pit Proctor's guard-heavy lineup, led by Caleb Green '17, Geo Baker '17, and Tshiefu Ngalakulondi '17, against one of the top big men, 7'2" sophomore Chol Marial,  wing, 6'5" Jarius Stevens, and point guard, Rich Kelley, in New England. Proctor's six seniors are determined to put up a fight this post-season and we wish them luck as they take on the challenges that lie ahead.