The bus stopped and exhaled before letting us leave. It had been the first part of our journey. The group and I were headed to Cabo de Gata for the last excursion before leaving Spain. Dropping down the steps and off the bus I collected my overly-packed suitcase and made my way towards the train station. The hours ticked on by as our journey continued through the window of my seat on the train. Sweeping hills and mountains clothed in snow or still showing remnants of the summer green sped past me. I recalled the times that I had been on a train here in Spain and where it has taken me during my months here. 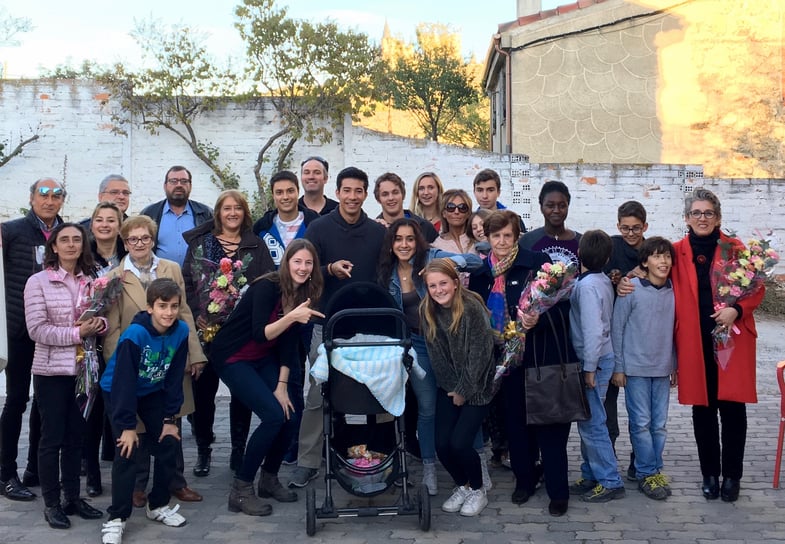 Finally the screech of the rails matched with the feeling of wheels starting to slow down signaled us to leave and exit the train. The platform was barren but gave way to a picturesque view. We were told that another bus trip to Granada where we would spend two nights and, later on in the excursion, a car ride were left until we reached our final destination.

During their final week in Spain students had the chance to sample the Segovian delicacy cochinillo or sucking pig.

And ponche segoviano, a traditional dessert made of layers of cake, pastry cream, custard, marzipan, and caramelized sugar.

After our time in Granada we gritted our teeth for another two and a half hour ride to complete our journey. As we pulled in to see our new home for the next three days, the landscape was nothing shy of something out of a vacation magazine. By this time the sun had left us and the cool breeze welcomed us in with the darkness of night. The houses illuminated in this way, colored only in bright white with domes, reminded me of Greek architecture. As the group hopped out of the van we all became awestruck at the fact that we were able to stay here. Grinning and laughing like children we all darted to explore the house. A wooden door opened the way to the beautiful, modern feel of the place that even came with a pool. After unpacking we all sat down and decided to make ourselves comfortable on the couches. 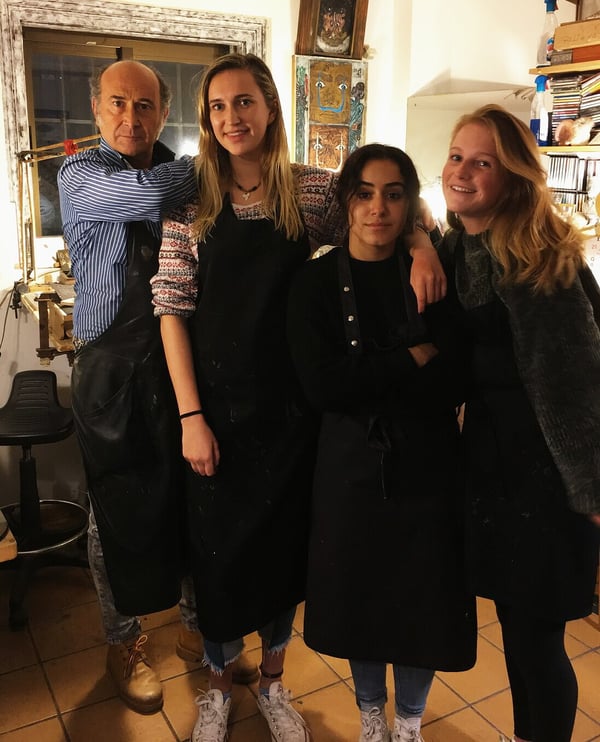 A night passed and the next day came full of adventures with a hike to the Mediterranean beach that occupied us for the day. Coming back home, we all decided to make dinner. It was like being a part of a family, and the way I felt that night made me realize that I had become part of one here in Spain. We gathered the materials to prepare the food, each of us assigned to different jobs. Some of us were stationed to cook, where light conversation were shared over music being played in the background. Others were content talking on the couch.

Once the meal was prepared, we all ran to the dining room table where we sat down in the dimly light room. Bread was being broken and drinks were being poured into fancy glasses; I found that there was something about the conversation over dinner that brought warmth to the night. We spent hours telling countless stories, good and bad, about people's lives. Everyone's faces were animated with happiness as we enjoyed each other's company.

Sitting there in that moment, taking a sip of my drink and looking around me, brought me closure. In a sense it made me realize that I had become part of something bigger than what I had expected. The Proctor en Segovia program was intended to bring me closer to the country, but I believe that it also brought me closer to the people around me at that dinner table. At this point, I saw that I had become accustomed to the way of living here, which was different from back home. Here in Spain, everyone tries to enjoy every moment of the day, but especially meals. They see this as a way to become closer with anyone who sits next to them at a table. I became part of the culture that night in Cabo de Gata and I will always cherish that dinner and the conversation shared.

Zina posing with her finished painting, the visual component for her Intro. to Spanish Culture Through Literature and Film final project.

Ever since I arrived in Spain there have been multiple characters that I have met through different circumstances. Each one has a different story, or at least the story that I give them. I am here today to talk about all these different stories, the stories that I saw through my eyes. They might not be correct. In fact, I might have them all completely wrong, because there is never truly a way to know what a person is thinking.

I will start from the basics. My host mom, her name is Carmen and she has cared for me throughout my time in Spain. At first glance I saw a talkative, hyper woman that would do anything to please others. This opinion of her still stands, however, I’ve noticed other details along the way. For example she has a knack for cleaning and she is easily upset by her boys who don't listen to her much. She raises her voice loud and speaks fast enough to make Bugs Bunny proud. But these things are still on the surface, there is still more to her. It turns out we actually have the same passion, or at least interest. It’s her passion and my interest. This that we share is house decorating and art in general. Her home is filled to the brim with paintings of bullfighters with red capes trying to outwit their enemy, clay models of women in beautiful dresses and glass vases that complement the room. Not too long ago she showed me the logo of the company she wanted to create, or rather was creating. A small white card with a yellow aqueduct and the shadow of a house inside it. If I can remember correctly the name was “home sweet home,” or something along those lines. 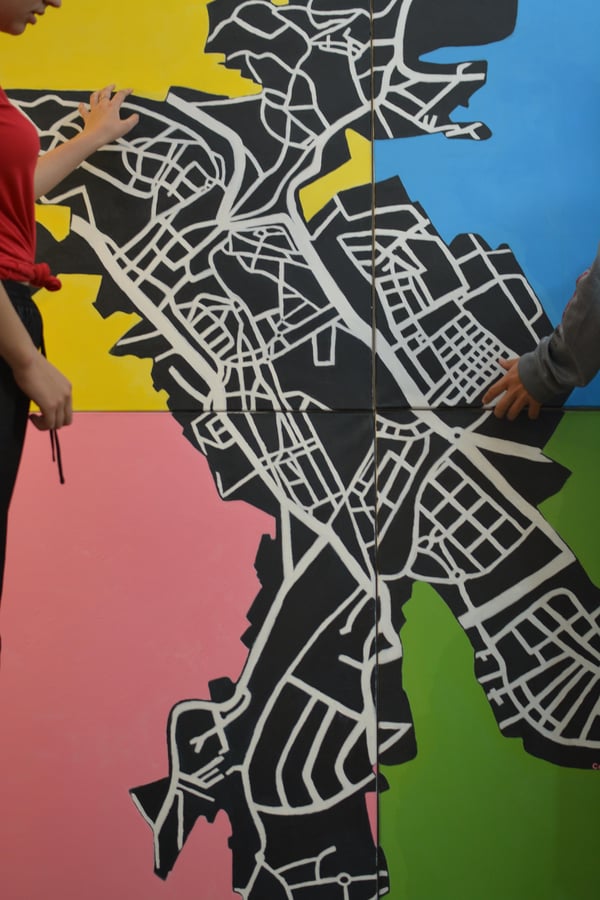 And Chloe and Caitlyn’s final project!

Another character I have come to see in my almost daily life is the man that sells lottery tickets on the left corner of the school building. He changed occasionally to another unknown face but he is there most of the time. Every time I see him he seems to always be the same, never changing. Always with long, dark grey hair pulled back into a ponytail and Harry Potter glasses perched on the bridge of his nose. It also seems that he wears the same clothes each day. But that's probably a result of him not paying a lot of attention to his clothes: a faded short sleeve button-down shirt with different patterns depending on the day and khaki pants topped off with the occasional hat. For some reason I imagine that he loves that job, even though all he does is sit there all day long. Only someone with extreme patience could pull it off. As silly as it sounds that small green box is his domain, like he wasn't born for any other purpose. He's content sitting there with his green box. 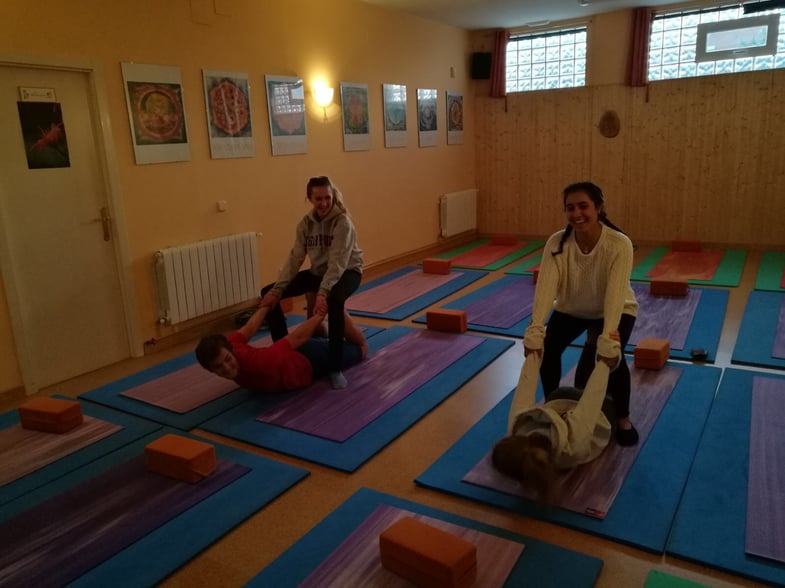 After living in Segovia for a couple of months I noticed how the elderly like to take things really slow and rest their legs by sitting on benches in either the Plaza Mayor or in front of the aqueduct. Being punctual I always get to where I need to be as fast as possible with no interruption. So, as a change of pace, I decided to walk behind this one elderly couple and not pass them. Immediately I was thinking to myself it will take ages to get to where I want to be, and I even sped up a bit to pass. However my will was stronger than my need, so I forced myself to stay behind them. Again, after five minutes watching paint dry, I came across an opening in the Calle Real where you could see the landscape of Segovia. That is when I realized the pleasure of walking slowly. Walking by in the past I was so focused on getting from point A to point B that I never really focused on the magnificent view. So, when I was slowly walking by that evening, I watched as flocks of birds went about as well as observed the rows and rows of dark brown rooftops, some with chimney smoke coming from them. Passing by this view I now took the time to look at all of the buildings; each had their own decorative elements. I also saw the statue of Juan Bravo and took into account the history of this man with a new found respect. Once reaching the Plaza Mayor I sat myself down, got comfortable, and gazed up at the Cathedral. 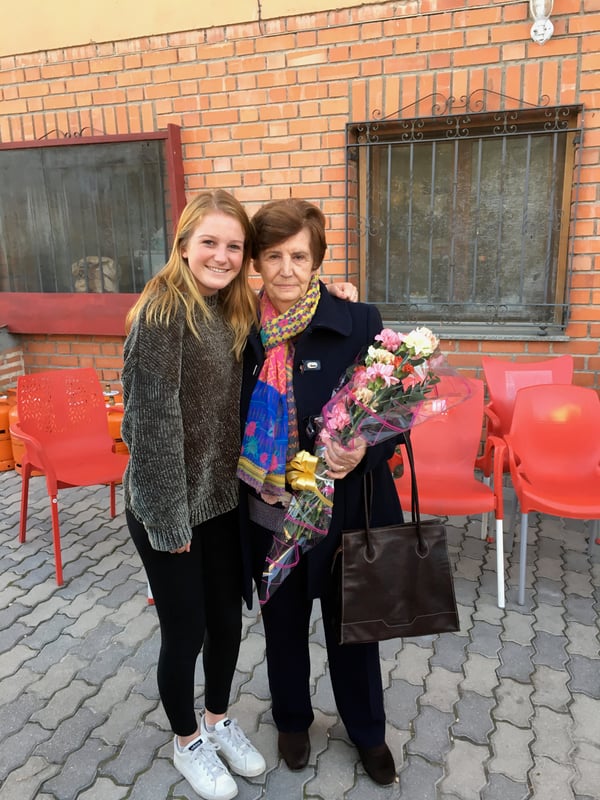