The day started early in the morning for me. As I walked down stairs to the kitchen, my lovely host mom was there to greet me with a big bagged lunch and big smile. I greeted her, she gave me my lunch, and I was off.

On Friday we embarked on an adventure to the bustling city of Madrid. I walked to the bus stop and, waiting, was the rest of the group all ready to go. We loaded onto the bus and off we went. The bus ride was only a little over an hour and, when we got to the station, we had to take the chaotic Metro. Soon we were in the beautiful streets of Madrid. The streets were full of eccentric motion. There were cars flying by left and right, people walking up and down the streets, and, every once in awhile, you could hear the echoes of dogs barking. We made our way to the hostel where we changed, took a little siesta and had a very productive group meeting. Then we made our way back out on the streets to explore the new territory. That night we ate at a gourmet Italian restaurant, and it was amazing. We went back to the hostal to get a good night's rest because we were going to have a busy day the next day.

Making friends with a Policía Nacional horse in front of the Museo del Prado in Madrid.

We woke up bright and early the next day. For breakfast we stopped at a churrería and had some fresh churros con chocolate. Everyone was chomping at the bit to get going because that Saturday we would be going to see one of the top art museums in the world, The Prado, as well as one of the best soccer clubs, Real Madrid. After breakfast we made our way to the Prado. It was a good walk through more of the beautiful streets of the city. When we arrived, Drew’s mom and his sister met us to walk through the Prado. Drew was ecstatic when he saw his family. They greeted by embracing in a big family hug and then we started going into the museum. Ryan gave us a great history lesson about three of Spain's most influential painters in Goya, Velazquez, and Greco. After the lesson, he gave us the opportunity to go out and explore the museum and write about what art spoke to us. We all really enjoyed the museum. 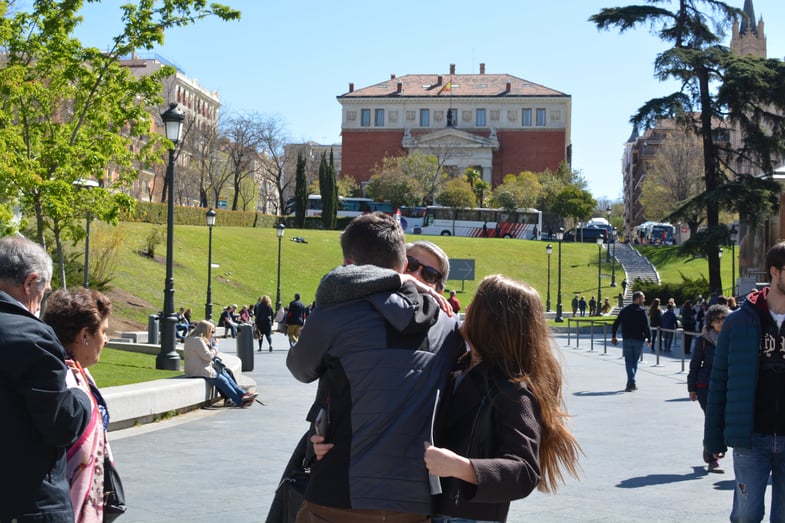 Drew's is reunited with his mom and sister in front of the statue of Francisco de Goya at the Prado! 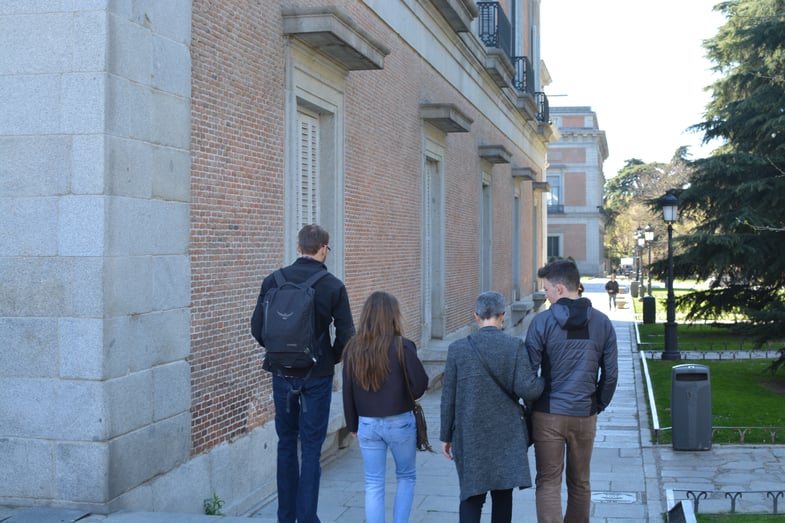 At around lunch time, however, we had to leave to grab a bite to eat and make our way to the game. As I was pinned to the wall of the train, standing shoulder to shoulder with hundreds of other happy Madrid fans, I realized how lucky we are to see Madrid and experience these things the way that the local Spaniards do every single day. It also helped that Madrid won 4-0. Our weekend in Madrid culminated with a final group dinner at a Mexican restaurant and we caught the last bus back to Segovia. 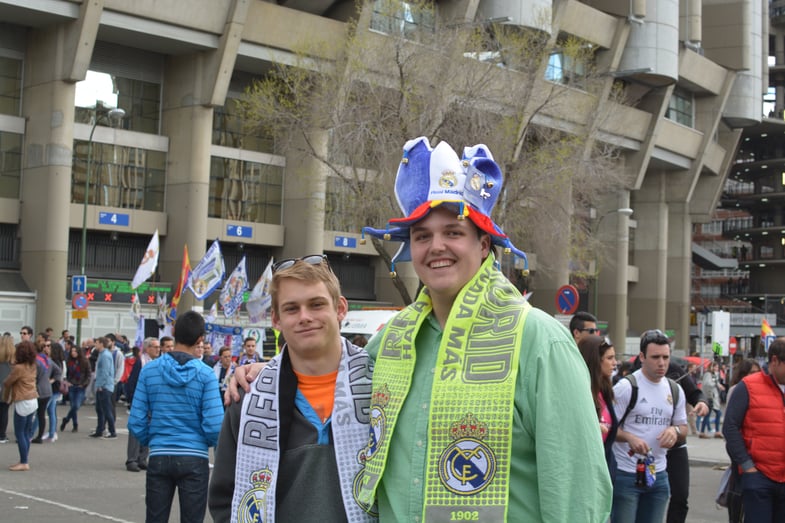 The following Friday, I was standing by the aqueduct with Kevin, waiting for his host sister, Marina, to pick us up. It was her birthday and she had invited Kevin and I because Kevin is her “host brother” and I am her “host cousin.” When she arrived to get us and she was accompanied by her sister and her real cousin. We walked to a local restaurant and a group of their friends was there to meet us. Kevin and I were overwhelmed by a lot of questions at first, but, when everyone settled down, it was pretty cool. We ate dinner, celebrated, and it was a fun night. Even though Kevin and I aren't really family, we were included in the birthday celebrations. They involved us and were always trying to talk to us. 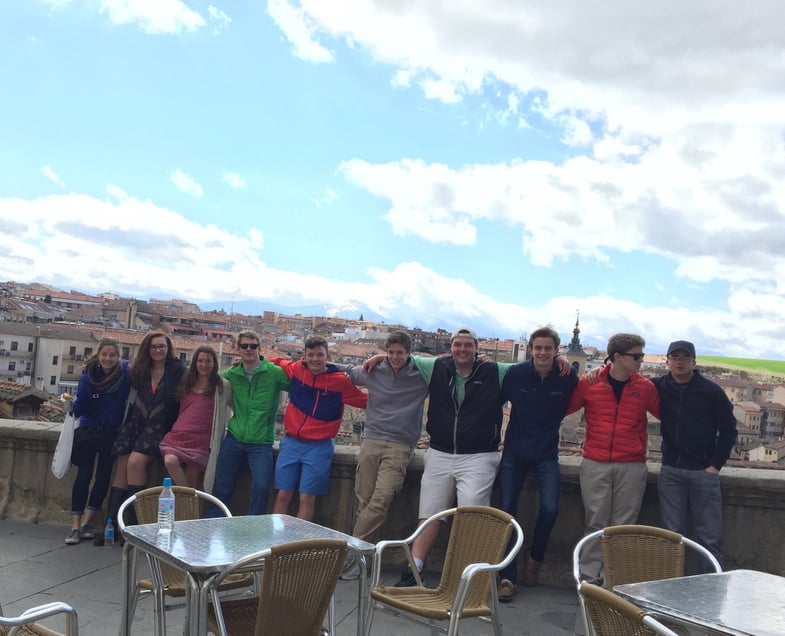 Pausing for a group shot at the Mirador de La Canaleja on our walk back to the school.

The following day, the whole group was invited to go to their family pueblo to celebrate Marina’s birthday again, this time with just family. Pueblos, for Segovians, are small towns where many families have small houses, often family homes, that they usually go to in the summers. Some of the group was off with their own families (visiting from the U.S.), but the majority of the group went to the fiesta. We stopped at a couple of cool castle and church ruins and a medieval town, Fuentidueña, on the way. When we got there, everyone was so happy to see us. A lot of people got up from the table to greet us and ask how we all were doing. I was amazed to see how much they cared about us even though we weren't even family. For a little bit, we were focused on more than the birthday girl. 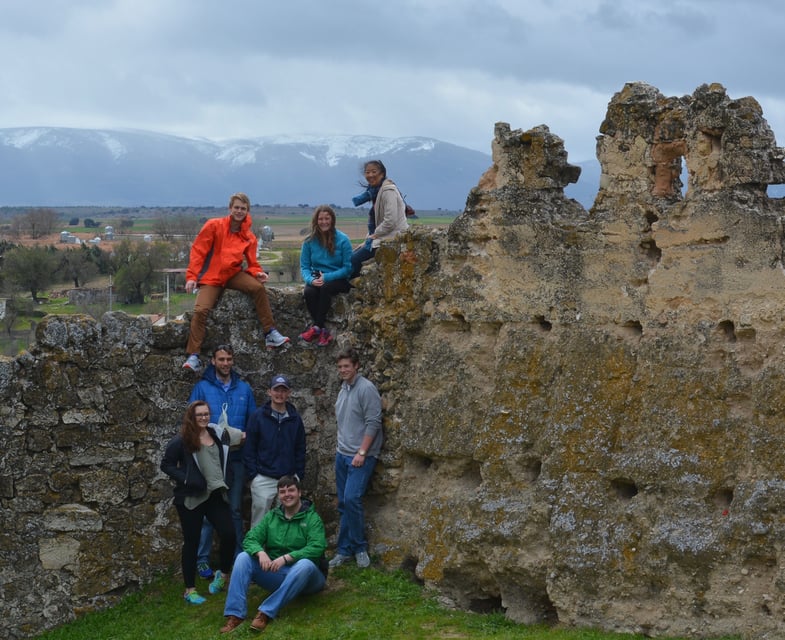 A stop at the Castillo de Turégano on our way to Marina's birthday party. Amina Hughes PA '13, visiting from her study abroad program in Aix-en-Provence, joined us!

Bodegas (manmade caves that serve as wine cellars) in the medieval town of Fuentidueña. 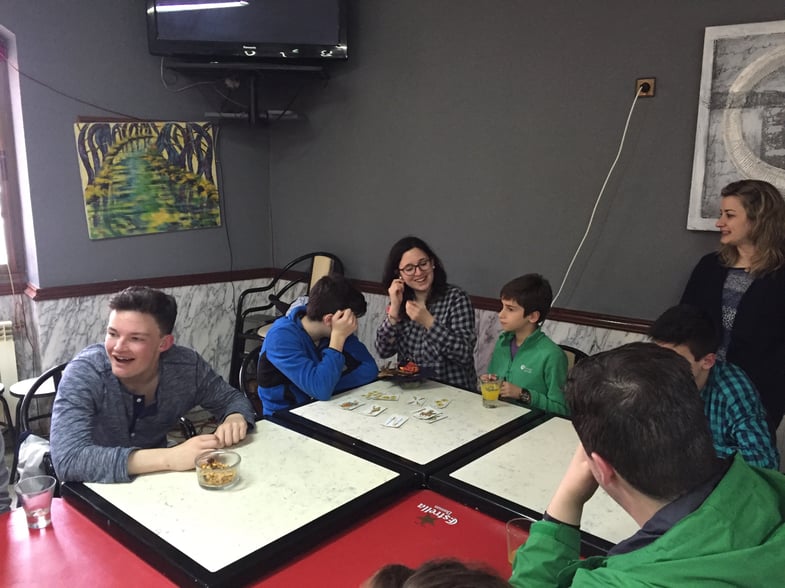 We stayed at the pueblo for several hours, playing soccer, foosball, and card games with the Spanish kids. At first all of the American kids were sitting together at one end of the table, but by the end, everyone was sitting in a different place and trying to talk with anyone that they could. As I look back, I see how generous these people are. They went out of their way to invite a large group of us to their family pueblo and cooked a lot of food to feed not only the 20 or so family members but also 9 of us. They also went out of their way to play with us. We played soccer with my host dad and brothers, as well as Kevin's host brother, and then we played foosball and cards with Kevin’s host sisters and their cousins. There were some kids who seemed to be nervous when we were walking in, but, by the end, everyone was speaking Spanish with another Spaniard and everyone had a good time. 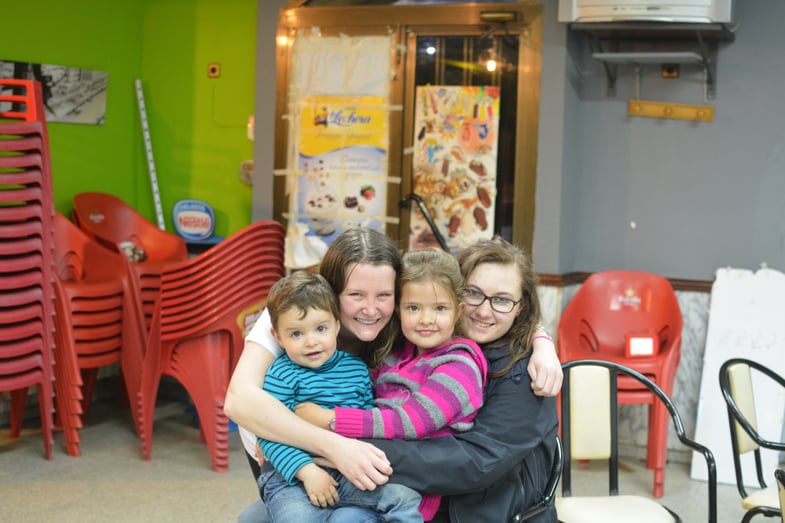 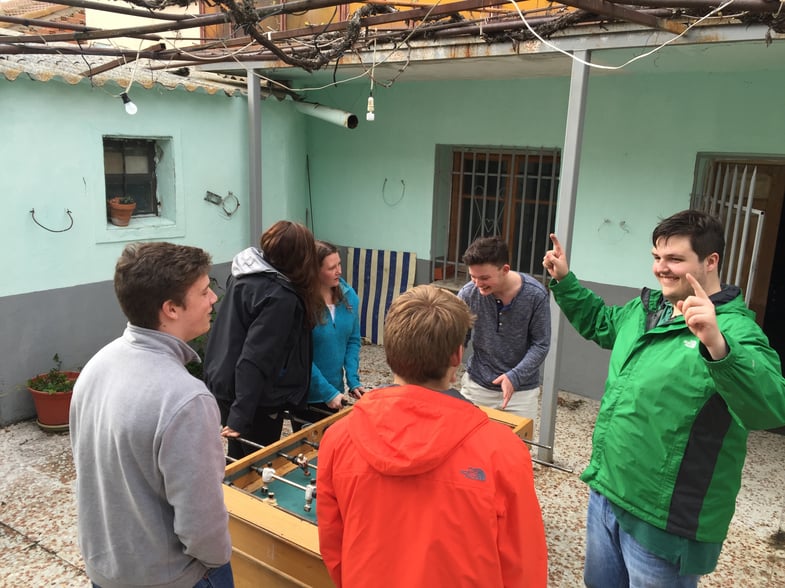 Foosball or futbolín in the back patio!

The beauty of the Proctor Segovia experience is that I am going to remember the sounds and sights of the game not the score. Some of my favorite memories are of being able to take a moment, listen to the sounds around me and analyze what I hear. In Spain I have the chance to slow down and look at the wonderful views. When I look out the window on the rides on the bus or van, I am surprised by the drastic changes in scenery. For example, the ruins of castles are littered across countryside along the way to a destination. As I watch, my imagination fantasizes about what it was like back when when armies fought against each other.

I was so happy to share my experience in Spain with my mom and sister and show them where I have called “home” for the last month. I was able to show my mom how far my Spanish speaking has come. Spanish has been a huge hurdle for me, and, to be able to talk to a waiter in Spanish when my Mom is around, is an awesome accomplishment. To walk around Madrid and eat Spanish food with my mom was also so wonderful. 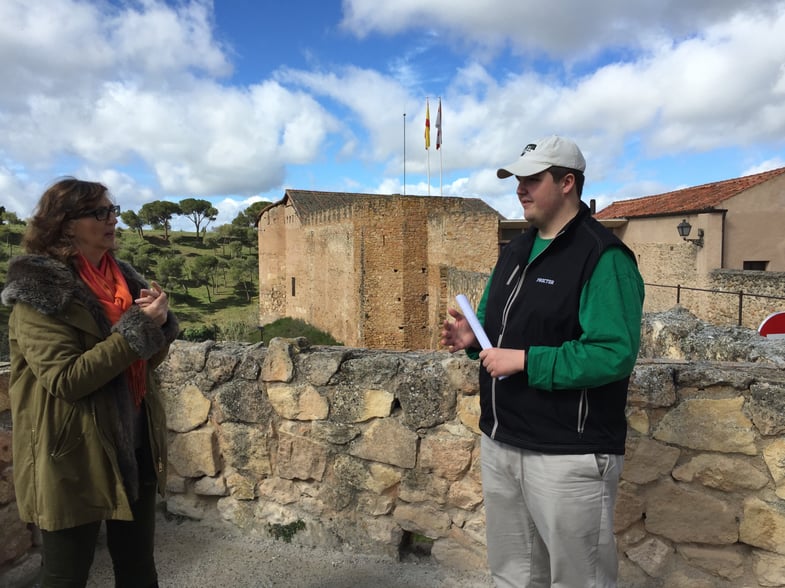 Grey giving a Spanish class presentation in front of the Museo de Segovia.