Proctor en Segovia: Journey To the End of the Earth 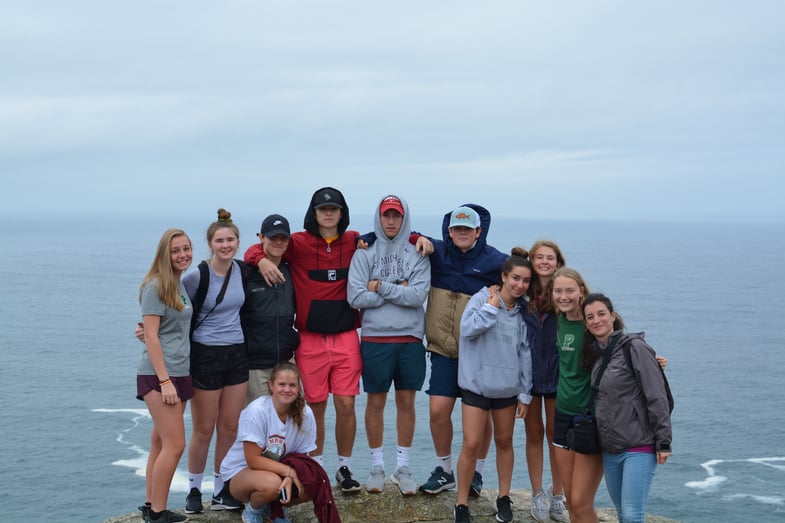 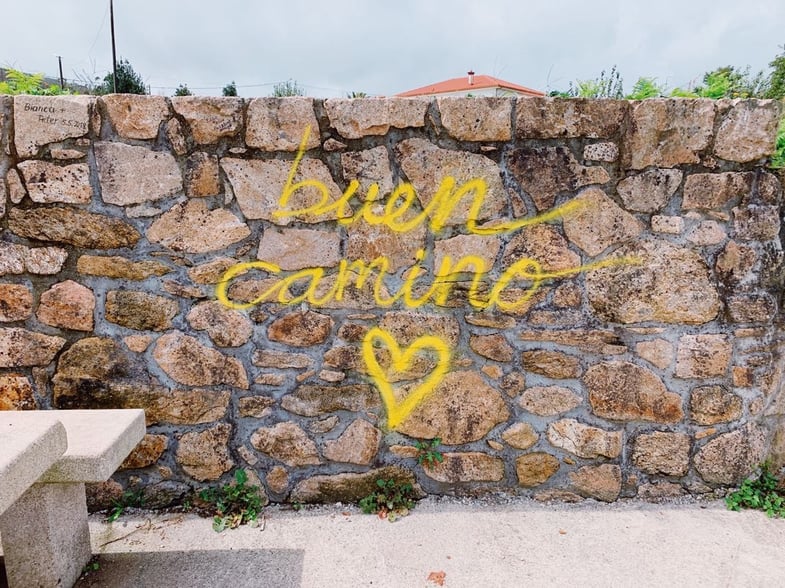 Buen Camino, which literally translates to “good path” is a common greeting along the Camino that can take many meanings such as “good luck,” “safe travels,” etc. (Photo credit: Ollie '21).

After a short day of classes in the morning, the group headed to the train station backpacks filled with clothes. After almost 6 hours of sitting and 2 different trains, we finally arrived in Santiago de Compostela. Santiago seemed to be a much larger city than Segovia with much more going on. After checking into our hotel we were given some time to explore the city. After wandering around the group ended up at the Catedral de Santiago de Compostela. A very large building that towers over the whole city. 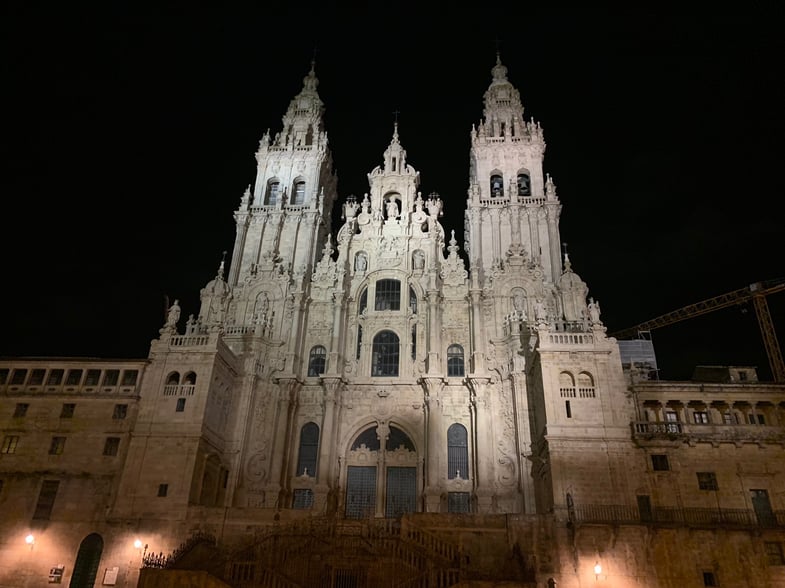 The Cathedral of Santiago de Compostela is the terminus for many who walk the Camino. However, many continue on to Fisterra and Muxía. (Photo credit: Ollie '21) 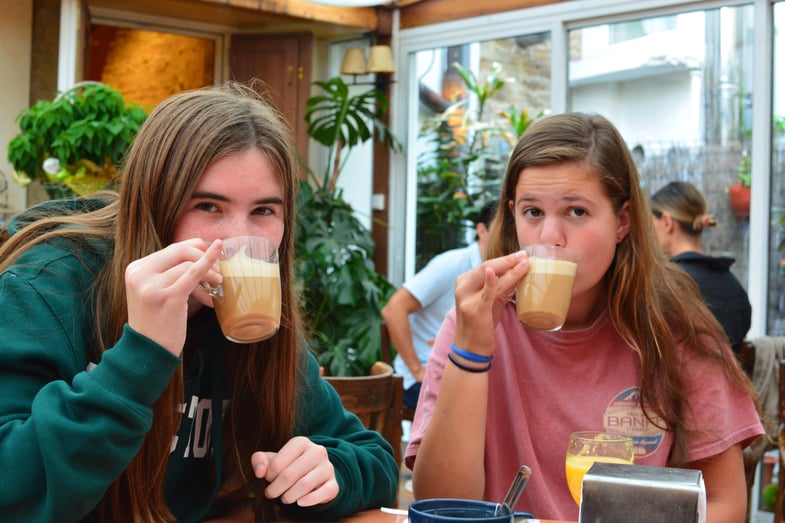 Starting out the day with a café con leche.

After a good night's sleep and a large breakfast, the gang was ready to take on the first stretch of the Camino. We hopped in a van, got some bocadillos (sandwiches) and started our pilgrimages. The First day we did 20.8 KM, approximately 13 miles. The views were either farms or cows for most of the way, but after a couple of hours and walking through many different towns we had finally arrived at our first Albergue (pilgrim’s hostel). After completing the first leg of our journey we were ready to get cleaned up and rest. 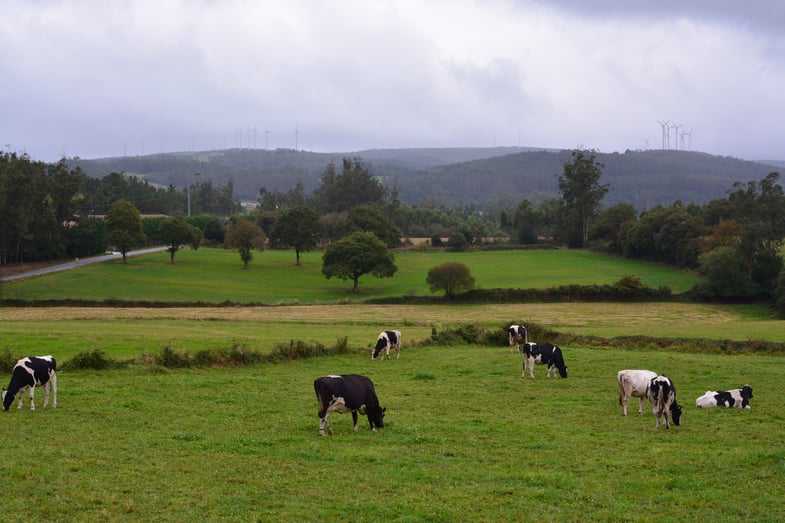 The next morning the group was up bright and early, Some of us were eager to walk, others not so much. We left the Albergue after a quick breakfast and were shuttled to our starting point for the day. We walked about 7 miles in the morning where we stumbled upon a small city along the coast. The gang stopped to eat lunch together at a small restaurant by the ocean. 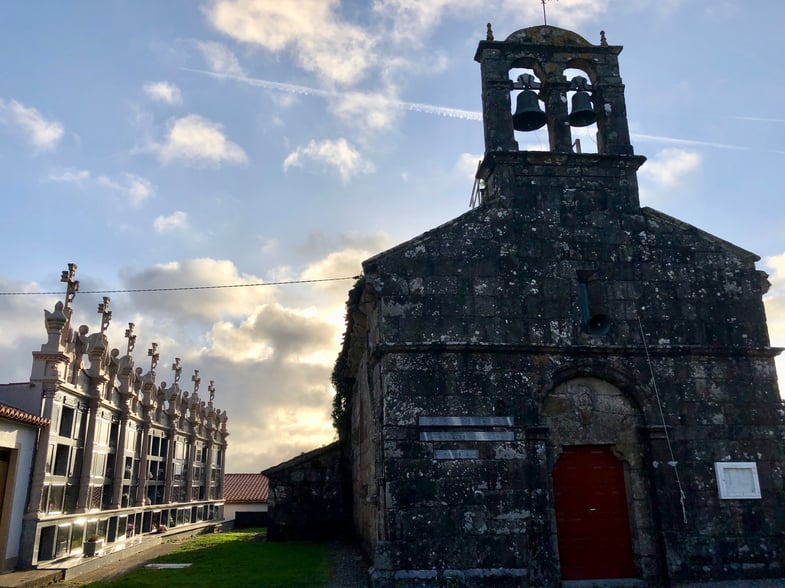 Remnants of buildings and monuments constructed for medieval pilgrims abound. This 12th century Romanesque church (with later modifications, particularly the addition of the bell tower) was visible from our first albergue. 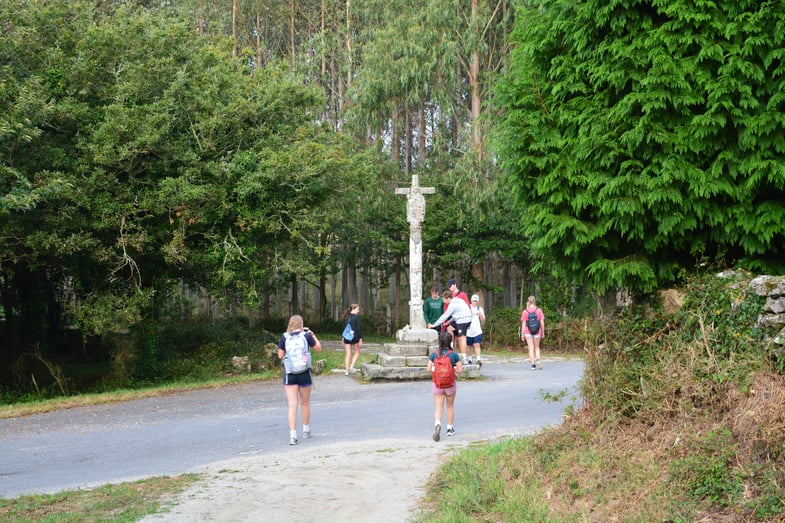 Another common symbol, the granite cross.

After lunch, most of the group started the walk, but a few of the boys stayed back and had two or three desserts! As the blisters started to form and the feet started to ache once again, the group was well over the halfway point of the journey. 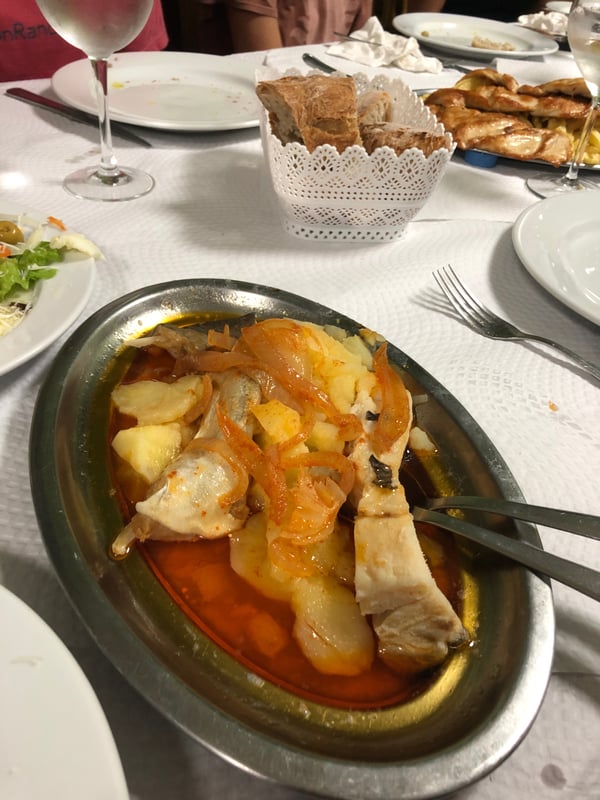 Lunch in the active fishing port city of Cee. 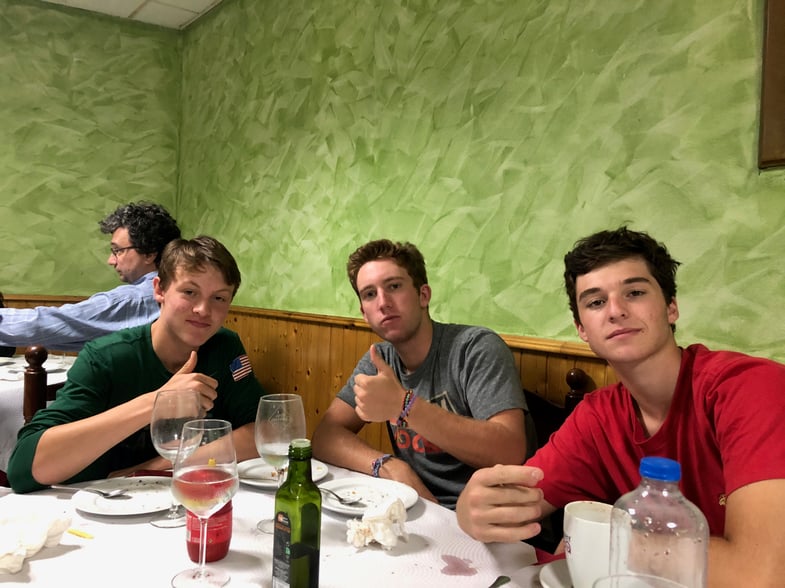 Some chose to have three delicious desserts!

Eventually we reached a beach with a long boardwalk and a small city where we were staying. We stayed in a very blue hotel. Seriously everything was blue. Some of the rooms overlooked a beach. Once the whole group arrived we settled in and headed out to an Italian restaurant where the group consumed lots of pizza and pasta. Everyone was relieved to have conquered the longest day. We were in the home stretch and looking forward to a shorter one the following day. 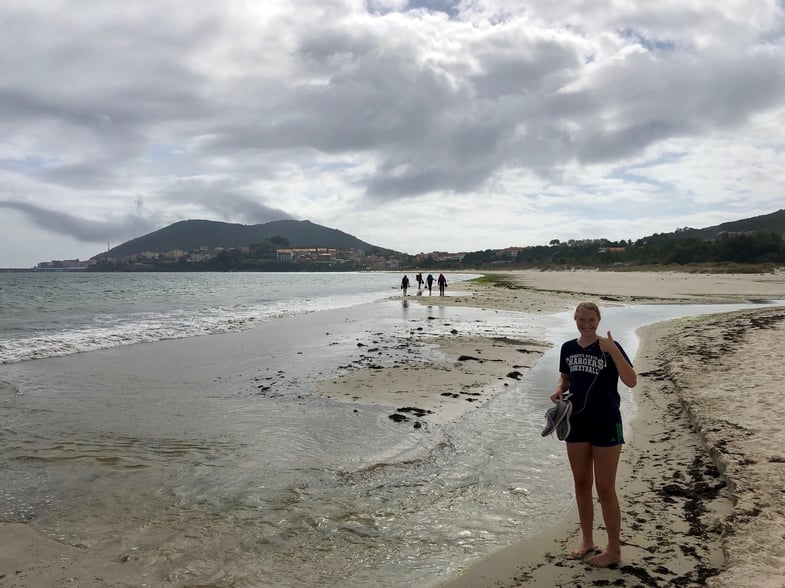 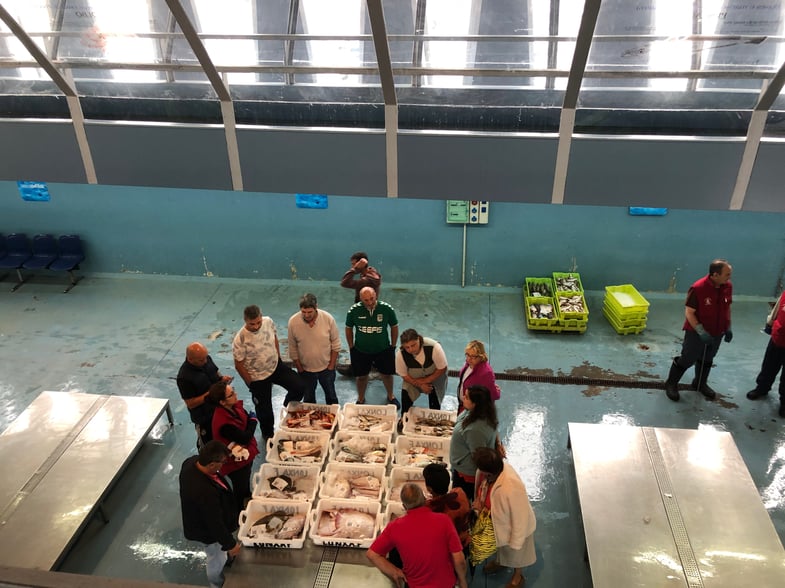 Bargaining inside the lonja or fish market of Fisterra. 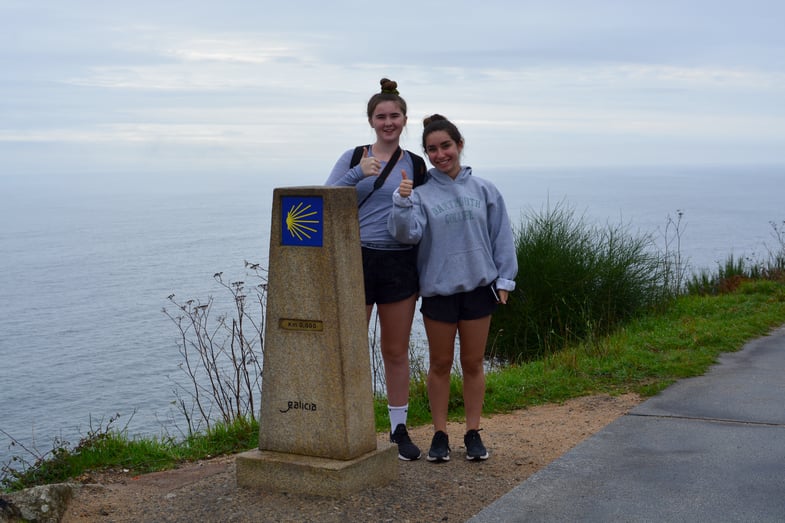 After a good night's rest and light breakfast the group was ready to finish our last day of walking, but first we made a pit stop at the Cape Finisterre Lighthouse.  Ryan shuttled the group to the lighthouse on a steep rocky hillside. The view was amazing from the so called “end of the earth.” (Finis Terrae was believe to be the end of the world from the era of Roman Hispania through the Middle Ages.

Following that we began the final leg of our journey, a 7 mile hike from Fisterra (the name for Finisterre in Galego, one of the languages spoken in Galicia) to Muxía. It was the shortest walk of the trip and we were told it would be the easiest but it ended up being the hardest for most. Battling our aching legs and feet and some gnarly blisters, we all managed to push through and finish. We ended at a beautiful beach where we talked about the journey we had just completed and waited for the other to arrive. The timber from fast growing eucalyptus has become an important part of the Galician economy, but at a cost as it has spread beyond plantations crowding out other species. Small scale farms, almost all with at least some corn, dot the Camino in Galicia.

After exploring the small fishing village of Muxía for a few hours and settling into our Albergue, the day was pretty much over and the sun was setting. Ryan shuttled the group to the Sanctuary of the Virxe da Barca (a small church and one of the traditional end points of the Camino). The church is built on a rocky point at the end very end Muxía, where waves were crashing and the ocean was all around us. We took in the spectacular views and watched the sun go behind the clouds and celebrated the end of our journey with a steak and seafood dinner! 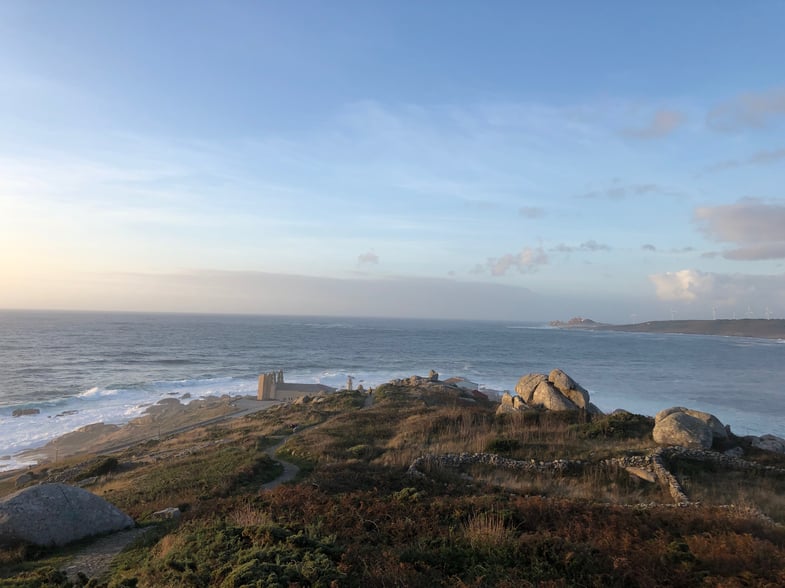 Sanctuary of the Virxe da Barca in the distance. 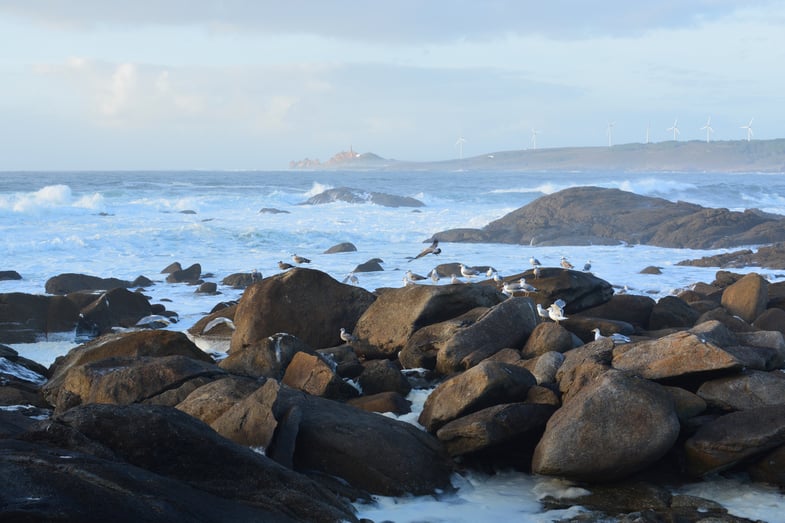 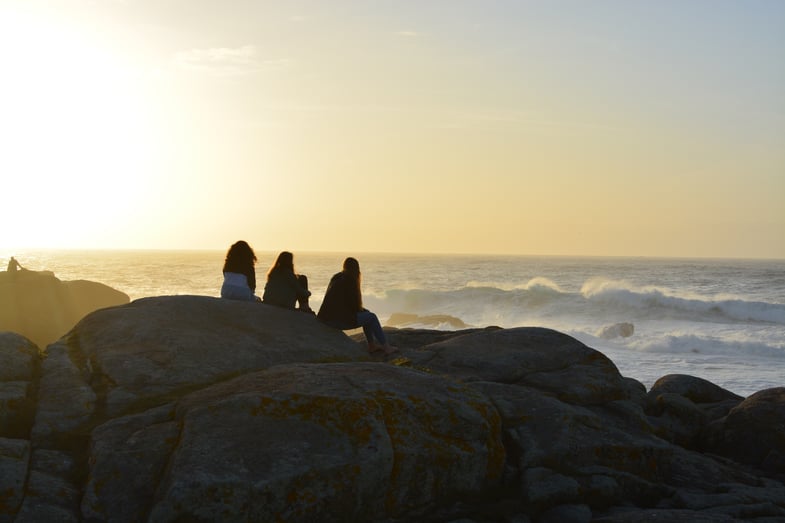 The next morning we embarked on our journey back to Segovia! We drove from the last hostel back to Santiago right where it all started. We grabbed a bite to eat and headed into the cathedral with a quick history lesson for Ryan. The cathedral was unfortunately under construction and covered in scaffolding, so the tour was short, but it was still impressive nonetheless. We hopped on a train and headed back to Segovia, and just like that our first excursion is in the books.