In the evening of a Thursday, the group steps off the train to be blindsided by a wave of heat and humidity. We should have expected this as we knew we were going to the southern part of the peninsula and the historically rich city of Sevilla. But nothing could have prepared us for Sevilla, especially the sight of palm trees all over the place; this definitely put some puzzled looks on group members’ faces. Shortly after our arrival in Sevilla, we went for a stroll on the boardwalk that runs along the riverside. We quickly spotted the unmistakable and legendary Torre de oro or “Tower of gold.” The tower is not actually made of gold and there isn't any gold inside. However, when the sun rises or sets the tower gets its golden yellow shine. 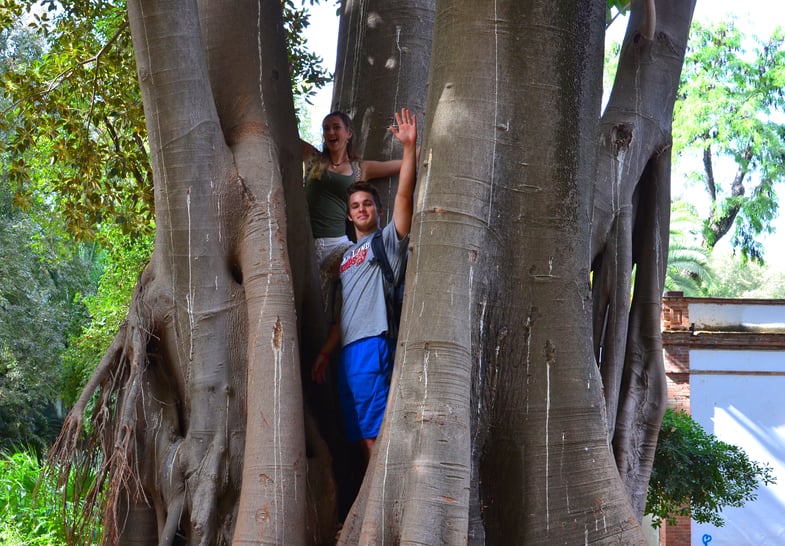 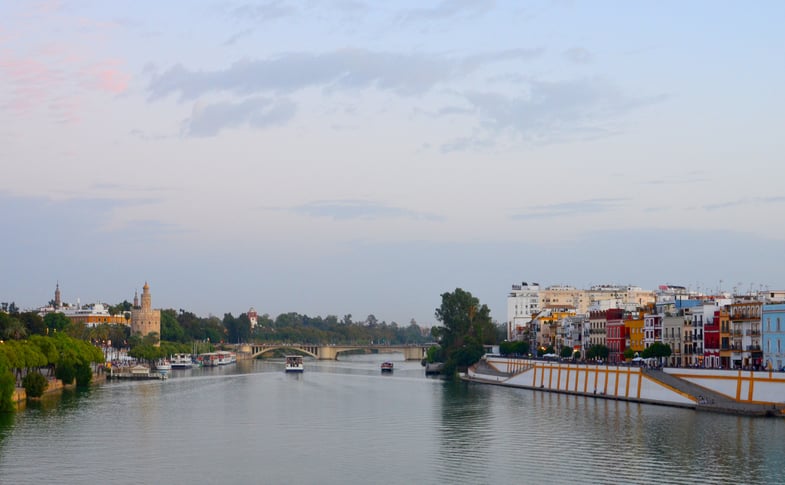 Crossing over Sevilla's Guadalquivir river to watch a flamenco performance at a tablao in the Triana neighborhood, one of the likely birthplaces of the art form.

The group went out for dinner that night at a classy restaurant, but not before a flamenco performance. I had personally never seen any such performance before and honestly did not know what to expect. There were five performances in all: guitar, a woman dancing, a singing solo, a man dancing, and a both dancers together, in that order. When the woman first stepped out she wore a black dress covered in red and pink roses with a matching shawl and many sparkly hair pieces in her pulled back braid of long brown hair. The man wore a dark suit with a black and red tie that popped out amongst his dark hair and features. Everything was intense, from the loud singing to the strumming of the guitar, the dancing being the most intense. I could see the sweat flying off the dancers as they twirled and tapped their way across the stage, impressive. 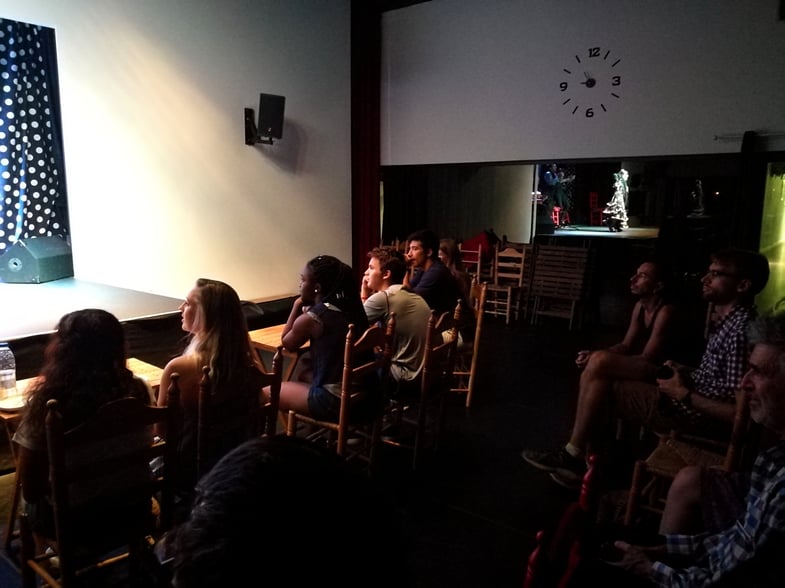 The next day can only be described as intense. We entered a cathedral that was built by the Christians after their “reconquest” of of the city of Sevilla and supposedly the remains of Christopher Columbus are laid to rest in an impressive tomb. This place has some of the highest ceilings I had ever seen. Columns as big and thick as five-hundred-year-old trees towered over all of us, and I must say that it made me feel uncomfortably small. But it didn't end there. The ceilings themselves were carved into shapes and patterns making it so that you only ever wanted to look up. 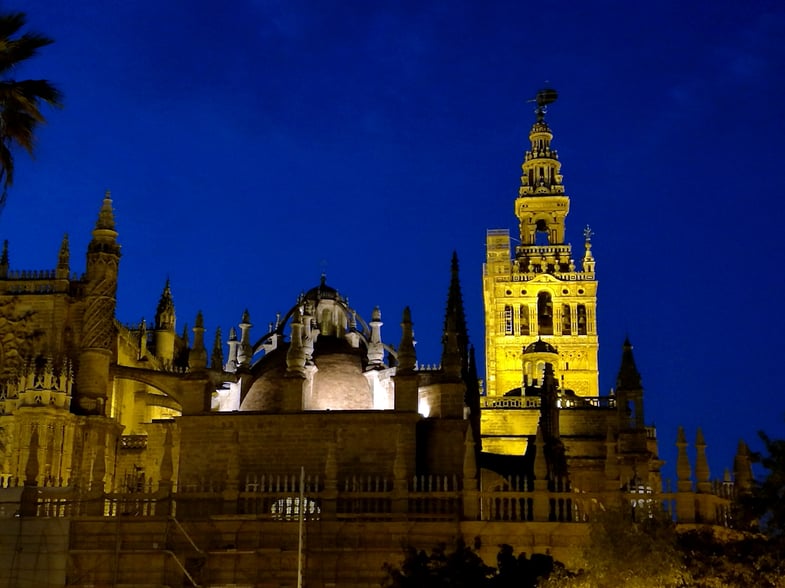 The cathedral and its memorable bell tower, The Giralda, formerly the minaret of a mosque!

Then there was the altar. Oh boy, let’s talk about that altar. At least forty feet of gold leaf that went completely from the floor to the ceiling. Dozens of box-shaped retablos in the altar were the only thing that kept it from being a complete golden wall. In each box was depicted a scene of Jesus’ life in extremely detailed painted wooden carvings. Yet there were still more different and smaller altars along the sides of the church in each side chapel each with their own complements of gold leaf and ornate statues of, usually, the saint the chapel was dedicated to. Twenty-first century Sevilla is a series of fascinating juxtapositions: ancient and modern, local and global, carefree and dark. It is the capital of Andalucía, but in many ways it still feels like a small town.

And then there was the bell tower. Ramp after seemingly endless ramp, 34 floors to be exact, brought you to a view overlooking Sevilla and the mountains beyond, and that was well worth the unwanted workout. At this height it was now extremely noticeable how whitewashed the city was, an attempt to reflect the harsh sunlight and keep out the heat. The scene is bright and happy. Overall views such as this have a way of making you feel so large but at the same time very small.

The Patio de los Naranjos (Patio of the Orange Trees) of the Cathedral (former mosque).

On the final day in Sevilla the group woke up early in an attempt to beat the line to get into the Alcázar that was right across from the Cathedral. Unfortunately every other tourist thought it a good idea as well and it ended up being a longer line than the previous days. Luckily, the line moved quickly and before we knew it our jaws were dropping at the sight of the entrance right after we passed through the gatehouse. The building was impossibly perfect and well preserved; the colors were vibrant and the sculpting was masterful. Of course, the inside had to be even more impressive as one could get mesmerized and never look down by trying to look at every fine detail on the ceilings and walls.

The Islamic phase of Spain's history (al-Andalus) is evident in Sevilla, sometimes clearly visible and in other instances just below the surface. Admiring the arabesque design in the Alcázar de Sevilla gardens. 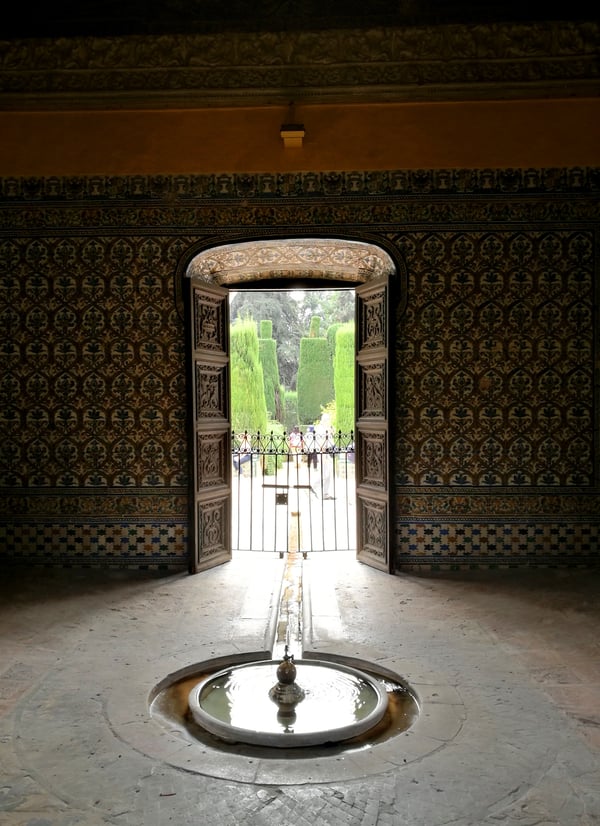 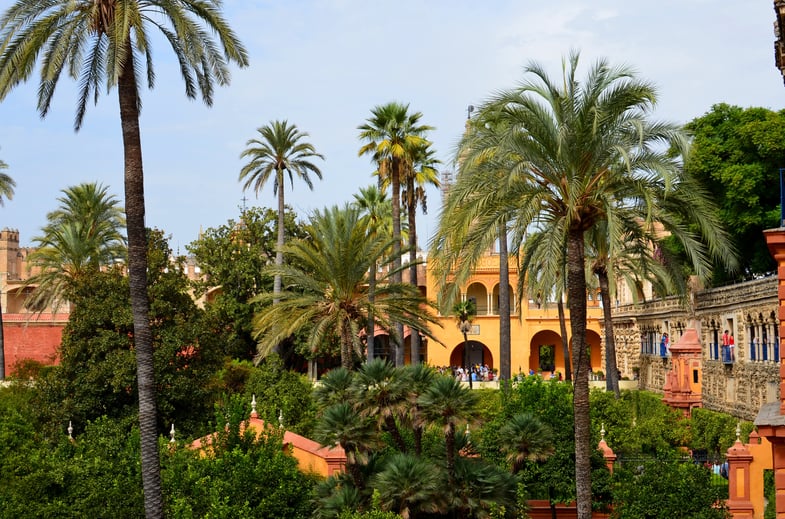