I could not have come close to anticipating the level of beauty we encountered this weekend. After spending two days exploring the city of Barcelona, we left for our lovely rental house nestled away in the Catalonian countryside. Although I was reluctant to leave Barcelona behind, this new location would prove to be one of the most incredible places I’ve ever visited.


We spent around two hours total in the car before we reached our destination: a cute stucco house with a tile roof and an impressive number of bedrooms and bathrooms. We then proceeded to spend a relaxed night in that began with dinner and ended with an aggressive game of spoons. 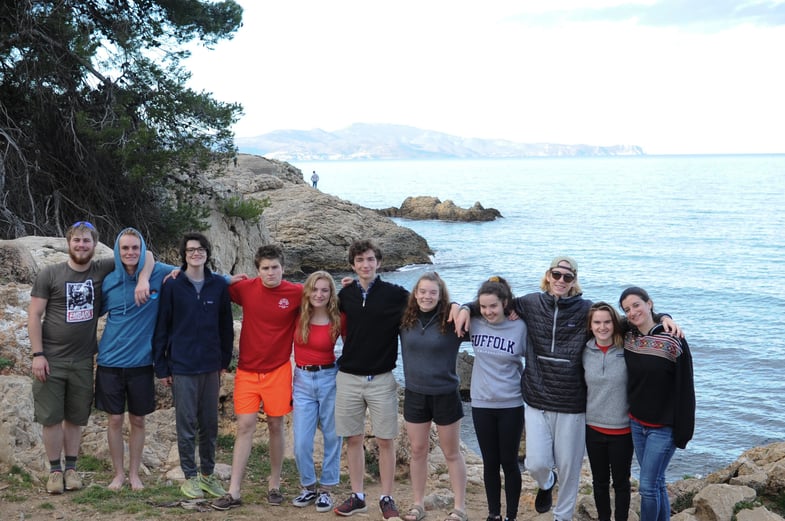 The following day, we set out for a hike alongside the Mediterranean. Even before we’d left the car, the magnificence of the landscape began to appear. The shimmering ocean water, the rolling green mountains, everything was utterly picturesque. Through every window was an incredible image of natural splendor. 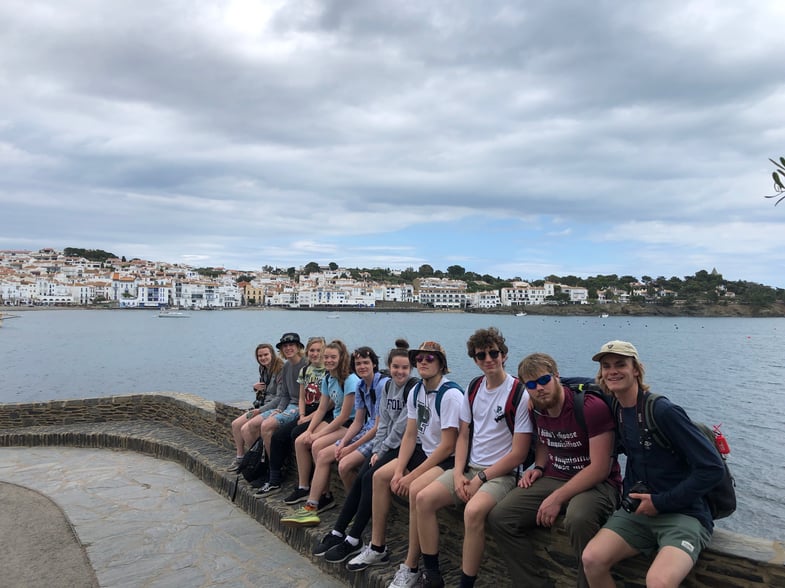 Everyone was taken aback by the view. Our heads swiveled around frantically as we scrambled to take in every last detail. We were scarcely able to believe what was happening. Driving those mountain roads seemed surreal. The music, the sheer altitude of the cliffs, the tiny town with the clean white buildings that lay peacefully beneath us. There are no words to describe such a scene. There is no way to relay the sense of calm and fulfillment that comes from such an experience. I can only say that it was not a moment that I will soon forget. Memories like these ones last a long, long time. 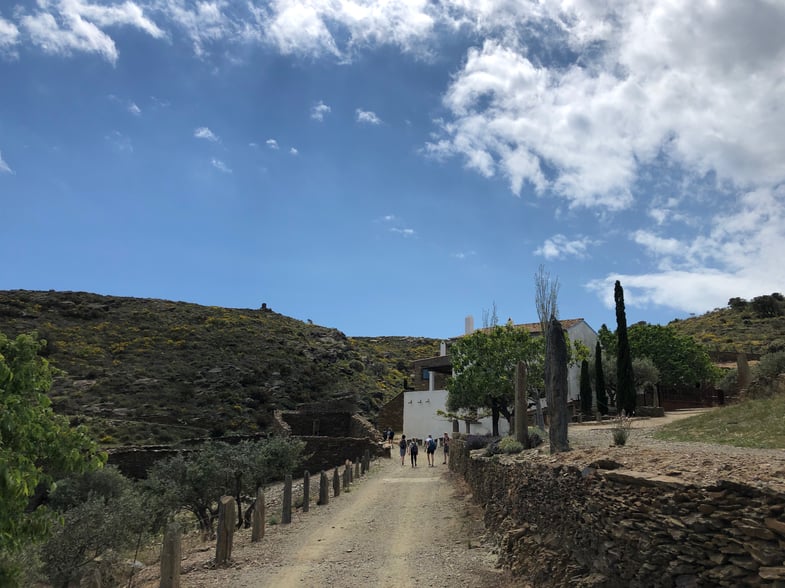 The weather was excellent. We clambered out of the van and into town. There was a sea breeze in the air and the houses were bathed in sunlight. As we made our way towards the trail, I reminded myself to take in as much as possible. Our entire trip has flown by and there is suddenly barely any time left. It seems as though just yesterday I sat down at the kitchen table at my homestay for the very first time. And yet here we are with just short of three weeks remaining. Every instant is valuable and needs to be cherished. Being here has certainly made me more aware of the passage of time. I have learned to appreciate my experiences and my privileges and to live in the moment. Because, soon enough, that moment is going to pass forever. 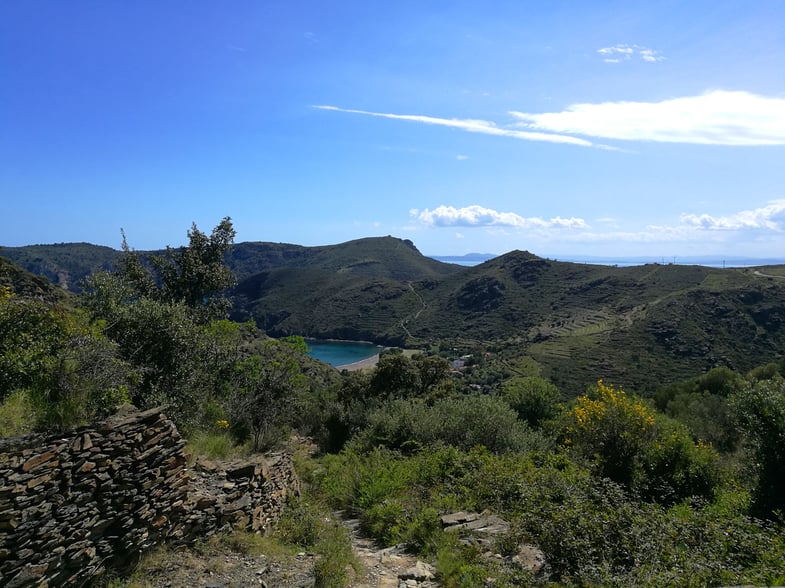 The first part of the hike was the most physically demanding. But after we’d scaled the incline, the land leveled off and it was possible to walk normally without worrying about slipping on loose rocks. We spent the next three hours strolling along the mountain trail, chatting and playing games. We joked around and laughed non-stop. It was one of the most pleasant days of my life. There was nothing to worry about and no other place to be. We were able to place our focus solely on the hike and our surroundings. Especially in our modernized, technologically developing world, being able to relax completely is a great achievement.

Later, we stopped on a beach to eat our bocadillos. We laid on the warm stones, listening to music and watching the sun dance on the water in front of us. Absolute serenity. Memories like these last a long, long time.

We could have laid there forever. But, sadly, we had to get up eventually. After skipping a few rocks and eating our lunch, we were on the move once again. We passed by flowers and ferns and coppery mountainsides. We pulled ourselves up rock faces and every now and then we turned to squint out across the endless stretch of ocean. We were completely awestruck by the sheer perfection of what we were seeing.

Unfortunately, all good things must come to an end. Just as quickly as it had started, the hike was over. I didn’t want to leave the trail or the conversations behind. I didn’t want to go so soon. However, thankfully, memories like these ones last forever. 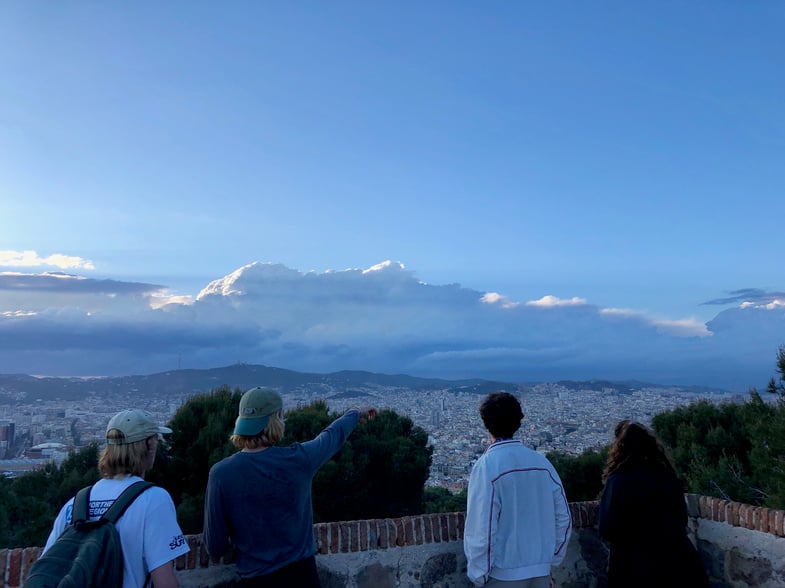 Upon arriving in Barcelona, I expected it to be fairly similar to Madrid, which we had visited before, with lots of congestion amid the narrow streets. However, there was a lot less business in Barcelona than in Madrid, at least in the areas we visited, and the sea could be heard nearby. As we explored the city, you could hear the waves crashing down and smell the salty air, which in itself gave it a very different feel from Madrid, as Madrid is somewhat isolated from the ocean in the middle of Spain.

While we were only in Barcelona for about two days, we were able to adventure throughout the city, including learning from Ryan about many of the historical aspects of the city. On Thursday, we visited “La Sagrada Familia,” a Roman Catholic church with extraordinary and impressive architecture and stained glass windows that surrounded the entire church.

While we had watched a video in history class a couple days prior to visiting it, upon going inside, it far exceeded my expectations and everyone else’s. The church was filled with tourists from all different places, but this was expected due to the miraculousness of the building.

Signs of protest and support for the Catalan politicians who have been imprisoned for organizing a referendum on independence were visible throughout Barcelona and Catalonia.

After a couple days in Barcelona filled with learning about the history of the city and exploring as much as we could, we then took a two hour van ride to northeast Catalonia, a fairly rural section where we would all be staying in a house together, as opposed to a hotel in which we usually stay during excursions. One major difference between Barcelona and Catalonia was the language. Catalan is a completely separate language from Spanish and it is more widely spoken outside of Barcelona. We were already struggling to communicate in Spanish while in Barcelona, so attempting to speak an entirely different language seemed like a lost cause. We relied primarily on hand motions and short Spanish phrases.

Spanish practice time with Laura in a café in Barcelona's L'Eixample district!

While in Barcelona we had primarily relied on restaurants for our food, but in Catalonia we made our meals in the kitchen that was provided by the house we were staying in. While we were also only in Catalonia for two days, we made more trips to the grocery store than I have my whole time in Spain, making one trip for almost every meal. If we had been there for a few more days, the workers there may have begun to know us on a first name basis.

Our second day in northeast Catalonia, on Saturday, we went on a hike for about three hours that most people consider the highlight of our trip. The weather was warm, reminding everyone that summer was approaching quickly. The sea was an aqua blue color throughout the entire hike, and the horizon line was far in the distance. While the hike was a few hours in length, it seemed to go by quickly as everybody became lost in conversation. After a couple hours of walking, we took a break to eat lunch at a beach, and some people even went swimming despite the cold temperature of the water. We returned to Segovia the following day, making this hike a satisfying way to end our second excursion of the term. 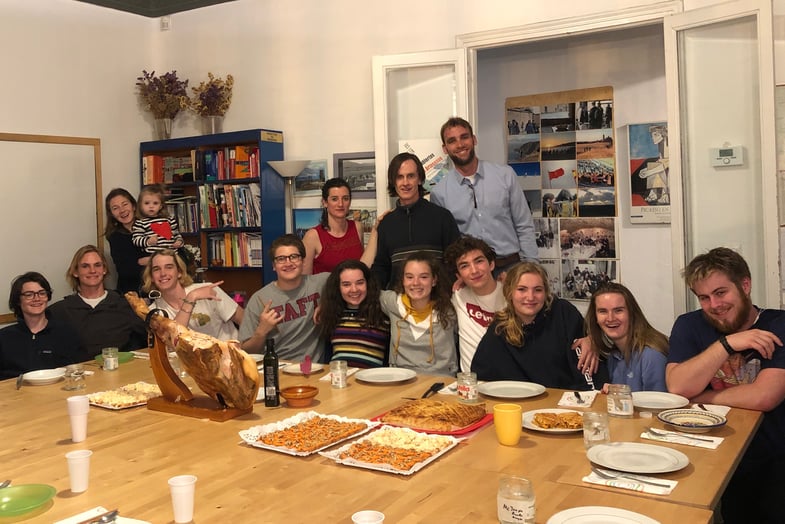 Before our trip to Barcelona and Catalonia, during Semana Santa and our family weekend, French and Spanish teacher Erik Cole-Johnson surprised us with a visit!

A bit of rain did not stop Segovia's Semana Santa processions. 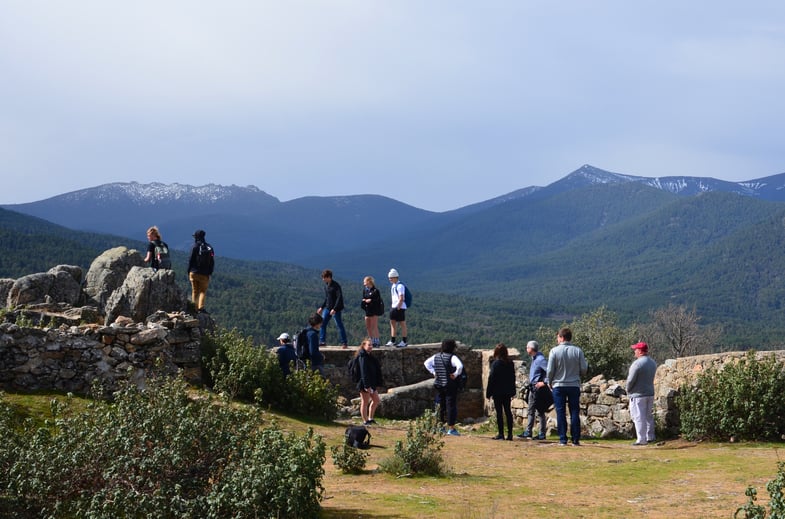 During our family weekend we took a hike to Cerro del Puerco, a little-known Spanish Civil War site from the late spring of 1937 La Granja offensive. 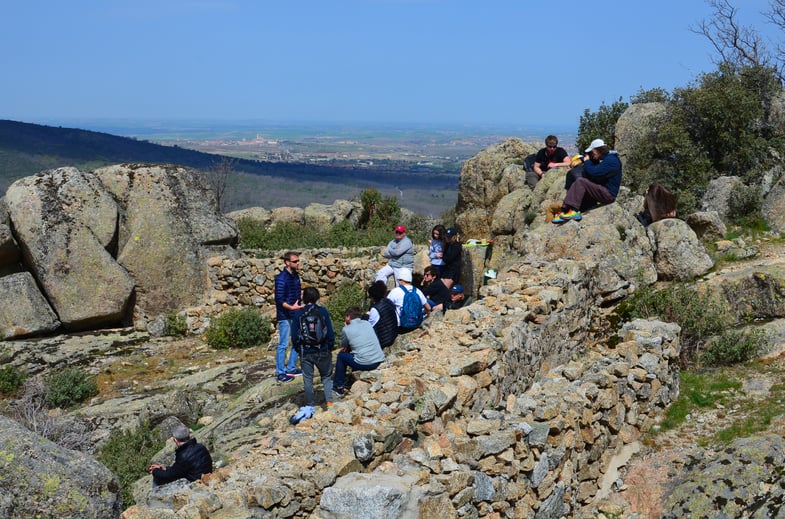 Views of Segovia in the background. 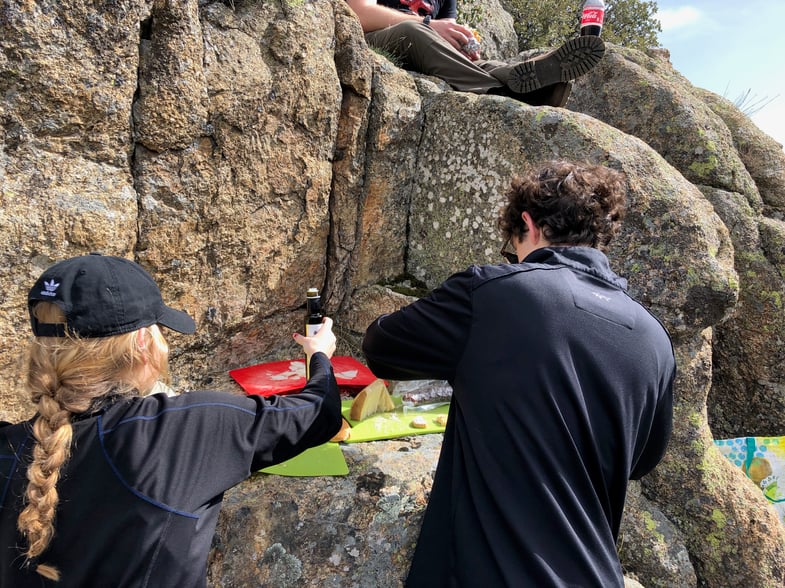 No Spanish hike would be complete without queso curado and jamón of some form.

In the afternoon we toured Segovia's Alcázar (castle). 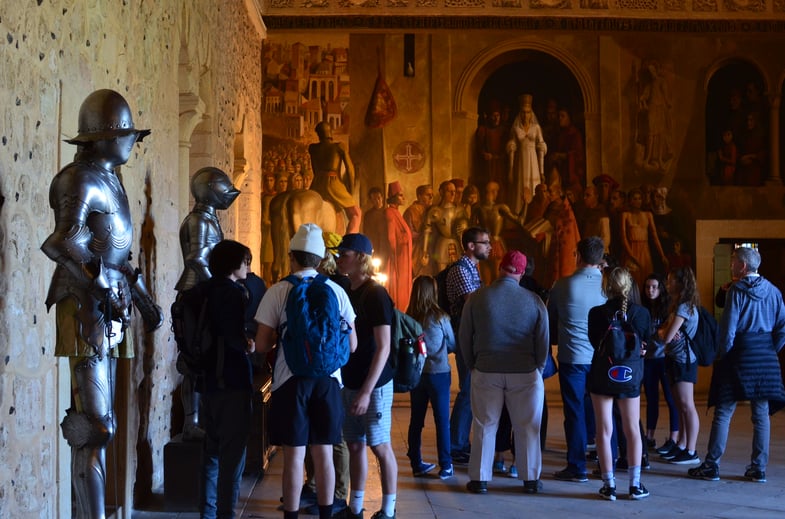 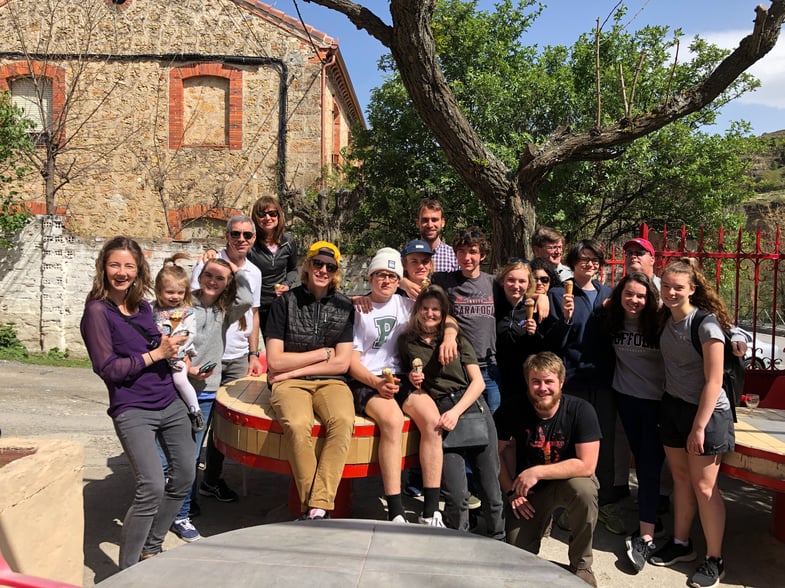