There are many things to be said about our trip to the Mediterranean coast, the most important of which is that it was like a sea urchin. At first unknown and questioned, but anticipation was felt in all of our spines. We are a classy group to travel with, although we aren't able to confidently say that we belong to the class Echinoidea, we can carry all of our belongings on our back and still keep with European fashion. Despite our circular pattern of travel, the differences between the Spanish regions made us feel as if we had traveled the globe (one might note that this shape is unreasonably similar to that of a sea urchin, but who’s paying attention). The differences between regions was one of the trips main themes, as we looked at history from different vantage points and gained understanding of the different people who have settled in the Iberian peninsula. 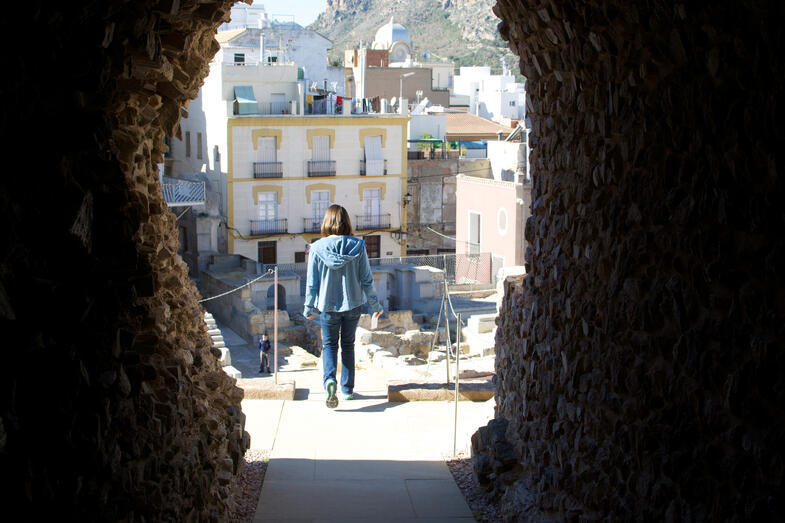 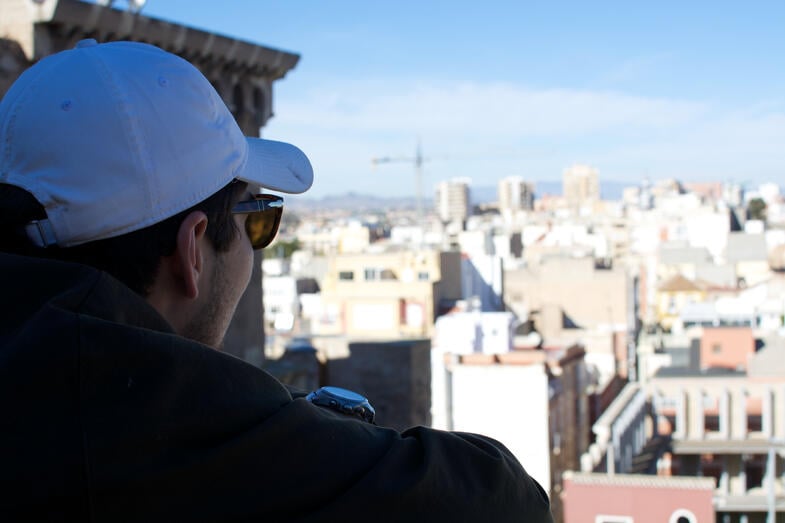 We traveled to Cartagena, arriving late in the evening. After checking into our hotel we went out for tapas as a group. ‘Twas a lovely evening filled with tortilla de patata and chicken curry. The traditional tortilla de patata, a vegetarian favorite, is also like the sea urchin. The mighty creature has radial symmetry which allows it to be divided into five parts equally, and coincidentally, tortilla de patata is also most easily shared when split in five equally cut sections. The next morning we visited the Roman Theater, which was beautifully warm and sunny, especially compared to the snow that we just had in Segovia. During the discovery of the Roman Theater many aspects of this city's history were discovered, adding perspective to our understanding of Carthagena. From the vista above we could see the entirety of the city and the influence of Moorish architecture. That very afternoon, we hopped in our vehicles with our “supercover” insurance and heading off along the coast. 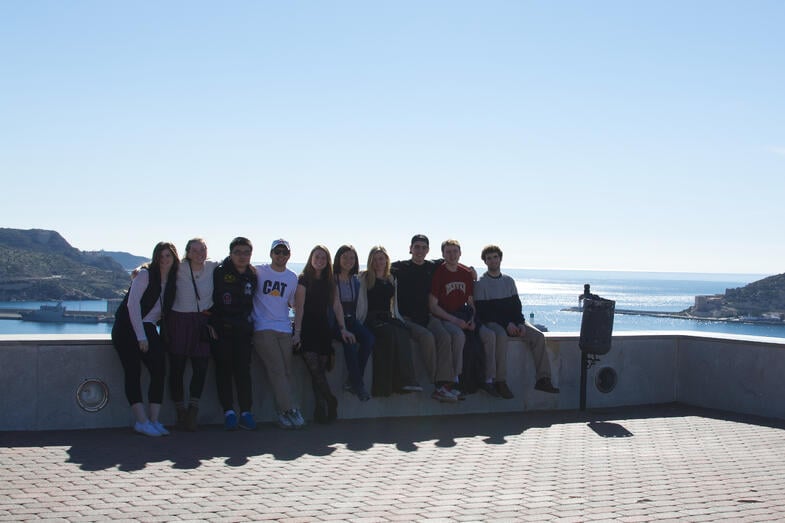 After our first glimpse of the mar de plastico, we began our ascent towards a castle. This winding mountain road trip was particularly nerve racking for one of our taller, jacket loving, 19 year old friend...but we won’t name names. Anywho, tears of joy were shed (ahem...Lindsay and Carlota) when we reached the incredible view point. Please see picture below because we all know that a picture is worth a thousand words. After seeing the best of Spain, we decided to submerge ourselves in darkness. Just like sea urchins, we found ourselves in the darkest, greasiest crevices of the earth. Los Chicos began salivating as once, for we had entered into old tunnels used during the Spanish Civil War. There was some sort of gun that we climbed up inside of from below, history and war-things were fervently discussed. Speaking of protection against greater forces, like sea urchins we are also known for our protection against predators. In this case aiding each other through the tides and inondation of the Spanish language and European hair gel. 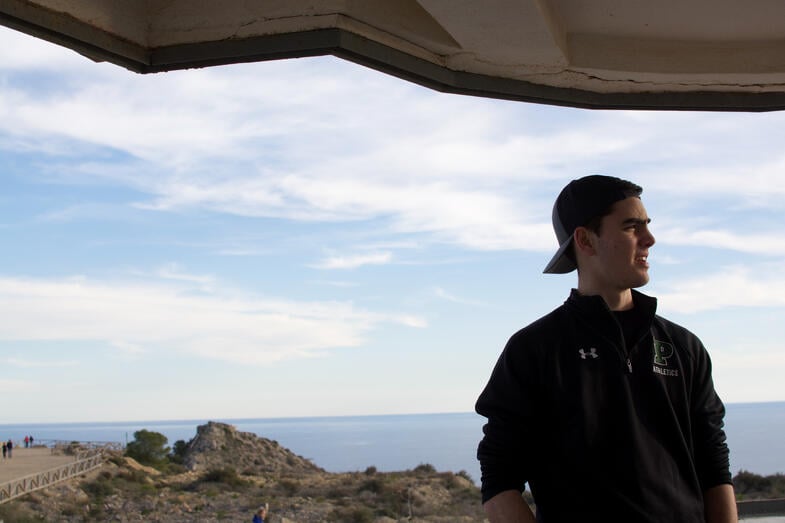 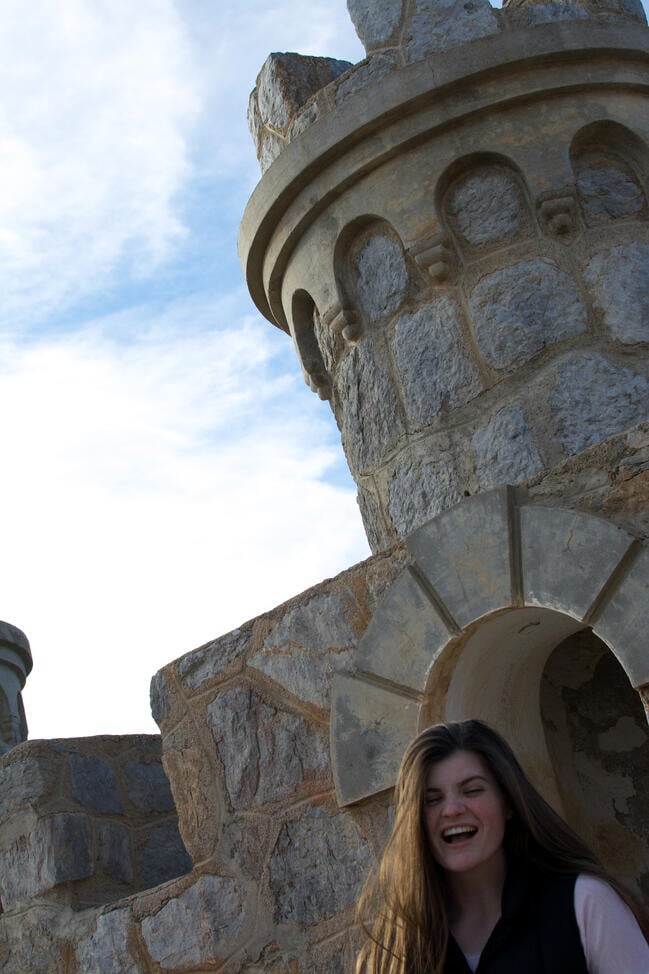 After this adventure we arose out of the earth and Gracie learned how to use the self timer of Mikaela’s camera...fascinating stuff man. 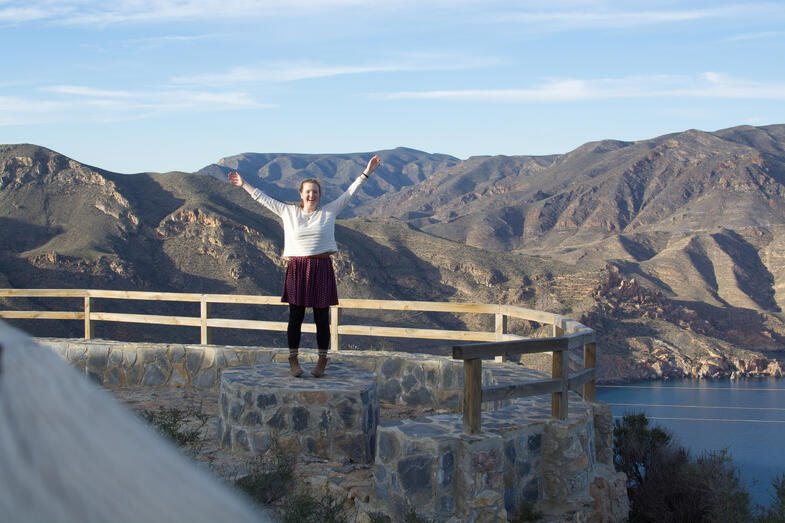 The remainder of the drive seemed like an eternity to some, but it was still less than 15 to 200 years which is the average lifespan of a sea urchin. We arrived in Cabo de Gata in darkness and made a suspiciously efficient grocery shopping trip before opening the doors of our new home. We were careful to avoid letting in the feral cats, Lechuga y Mittens. After a community prepared dinner, we made a hop, skip, jump, and boost trip to the roof. From this vantage point we could see faint outlines of the surrounding area and a plethora stars. Cabo de Gata is both within the desert and next to the ocean, accordingly the days are hot and the nights are frigid. We hiked along the coast and we were able to find, after a scramble down a mountainside, a stone beach. Despite our craving for a dip in the Mediterranean, there were far too many sea urchin friends to make this possible. We basked in the sun and ate bocadillos before hiking back to our house. It should be noted that through this day Greer and Ryan made a trip to the hospital close to Almeria for some time with the doctor. 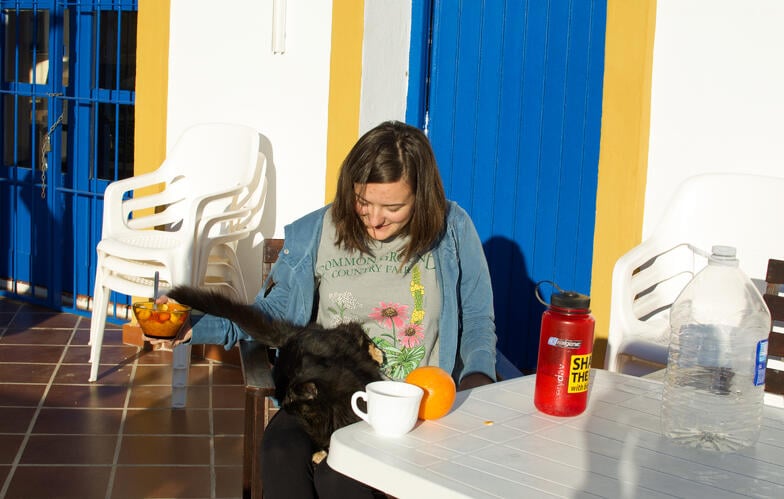 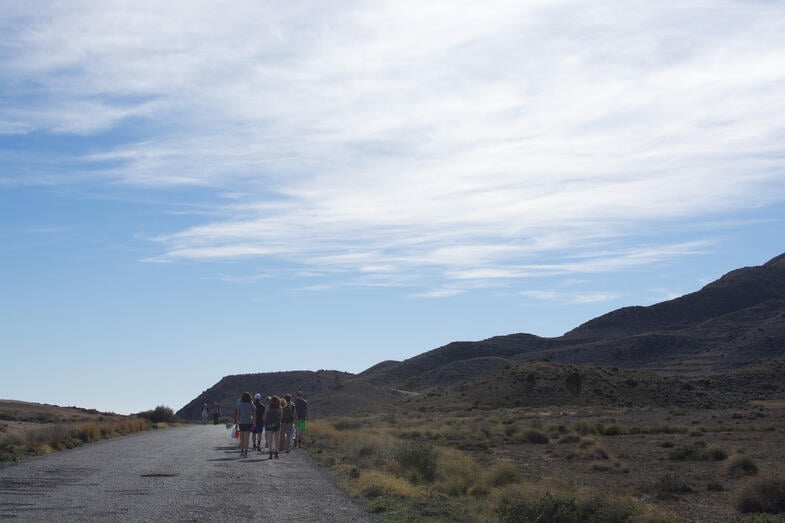 That evening due to lack of dinner ingredients, despite leftover food, we went with Ryan in search of a supermercado. However, due to Spanish customs on Sundays, all the supermercados were closed. Despite this setback we trod onward, breaking Ryan’s qualifier of only buying food from places that did not also sell appliances and clothing items. Purchasing pizza from a place called “Singpur” was our roundabout way of procuring dinner. However, during this adventure we managed to find the best mandarins in Spain and made friends with Moroccans. 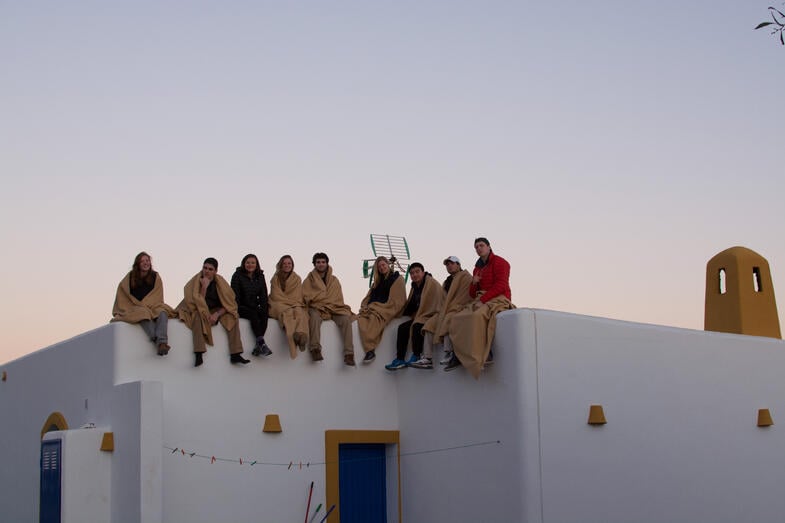 The following morning we pushed forward towards Málaga (pay attention to the accent), a larger city only a three hour drive away. We began our history project, splitting up into smaller groups to explore monuments throughout Málaga. Our group journeyed to the Cathedral and once again tears were shed and respects paid. It was a religious experience for all and some students were so enthralled with our enthusiasm that they went to see it for themselves the next day. We ate dinner at a lovely restaurant to celebrate Boyd’s birthday a day early; the boys ate flesh,  the girls eagerly consumed greens and cheese, and we all chowed down on a gigantic, gooey, homemade brownie. 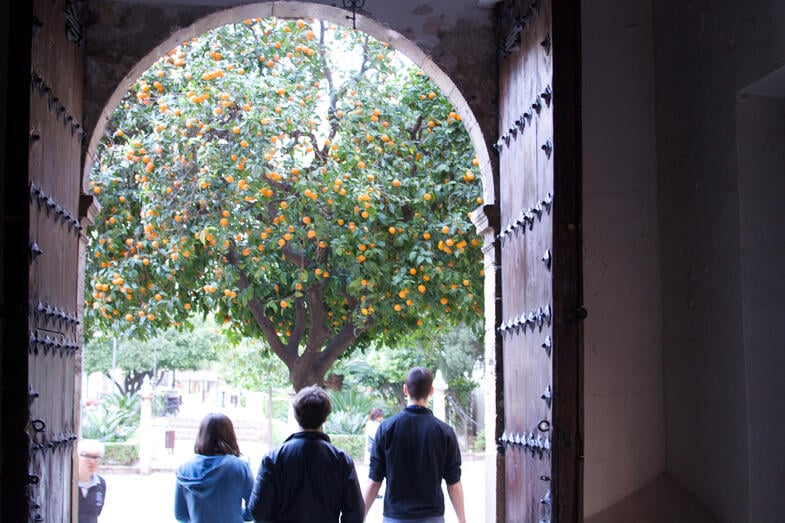 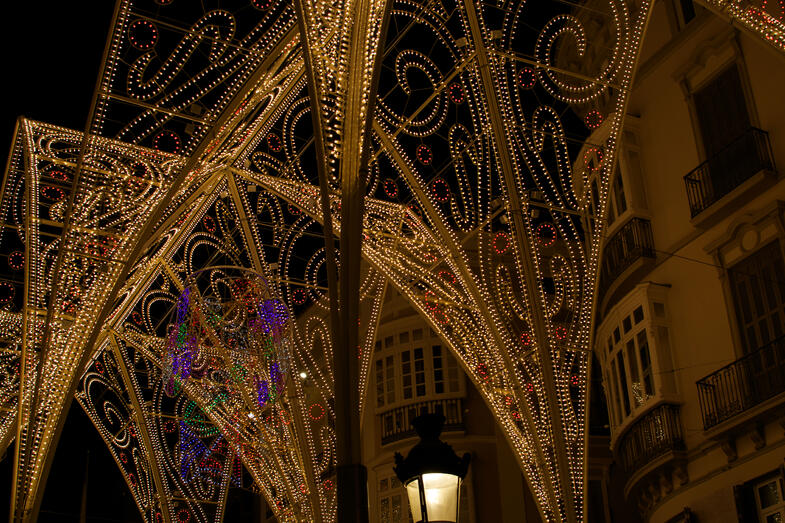 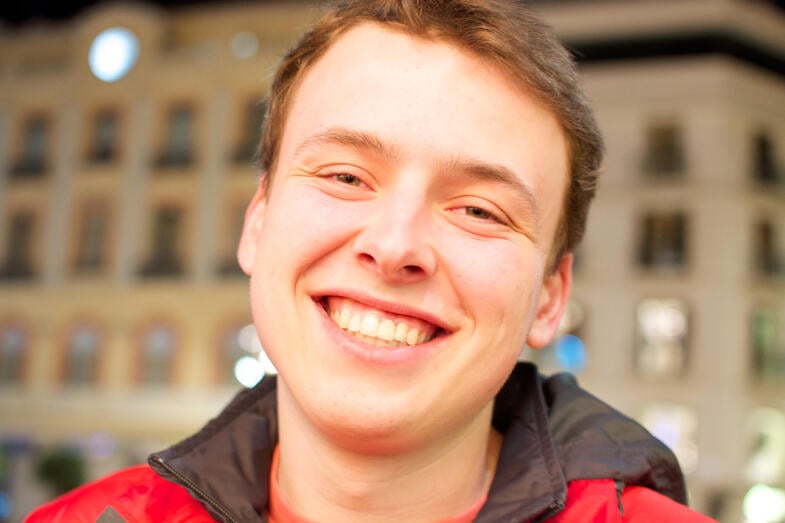 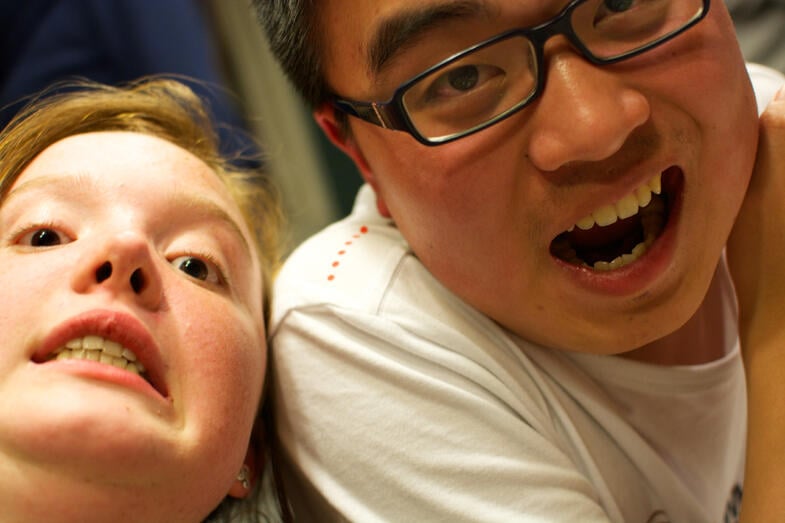 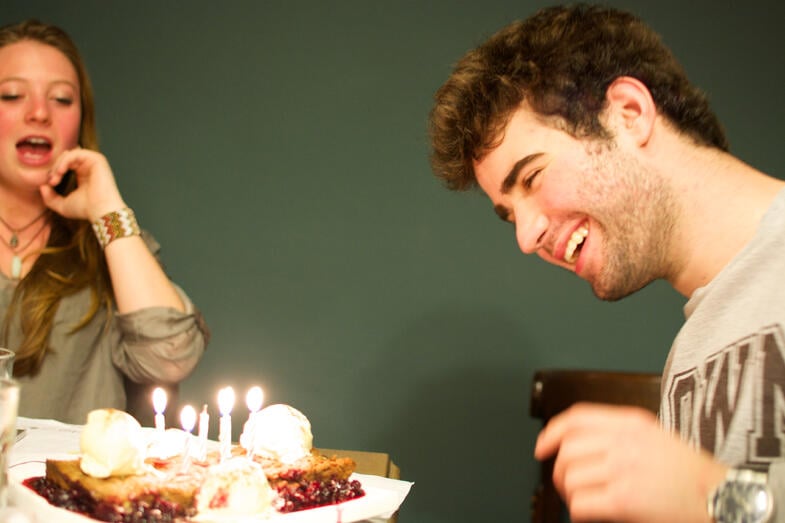 We journeyed on home (to Segovia of course!) on Tuesday afternoon via feet, train, metro, another train and bus. Although this may seem like a few too many transfers, public transportation is very handy and a friend to Proctor en Segovia rather than a foe; unlike sea urchins we don’t have any enemies (except the conjugation of irregular verbs). Our group has found a sense of wholesomeness and we sincerely look forward to future prickly adventures. Until then, we found some more facts about sea urchins on the net that resonate with us for reasons you will soon find obvious. Side note: no we did not fabricate these from our imaginations.

THINGS TO REMEMBER WHEN DEALING WITH SEA URCHINS:

NUMBER ONE: “Don’t worry, a rabid sea urchin is not going to leap off the reef and fling spines at you. Sea urchins are non-aggressive and relatively slow-moving. Still, sea urchin injuries are not unusual.”

NUMBER TWO: “Urinating on a sea urchin sting will not help, so save yourself the embarrassment. As there are two sources of injury from sea urchins, the spines and the poisonous pedicellaris, both need to be dealt with.”