I had been in Segovia for two and a half weeks. Although Segovia is unique with its own culture and people, I was so excited to explore a new city, like Sevilla and Cadiz. Sevilla and Cadiz are located in the southern area of Spain with gorgeous sunny weather and about 60-70 degrees each day. Cadíz, is in the southwestern portion of the Andalucía region, not far from where the Atlantic and Mediterranean meet in the Strait of Gibraltar. 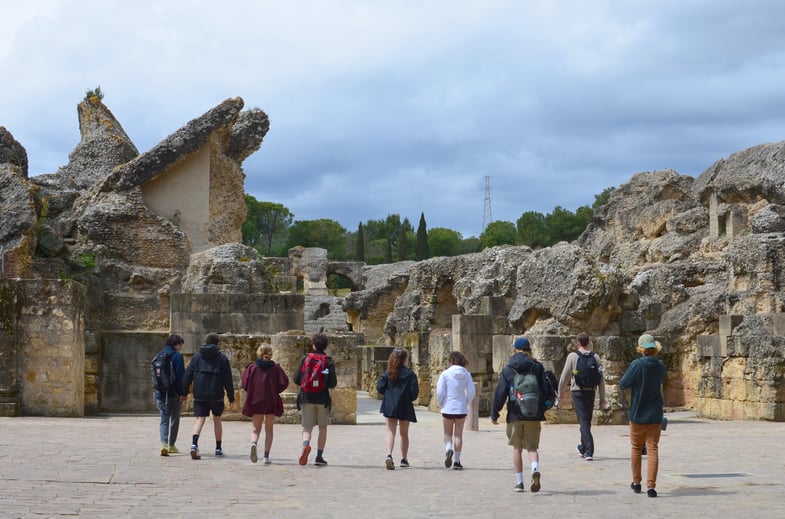 Entering the Roman amphitheater of Itálica.

On Thursday morning, I left my homestay at 10:05 am to meet the group at the bus station in Segovia. The bus would take us to Madrid, in Madrid we would board the high-speed train to Sevilla. We arrived in Sevilla around 3:40 pm and walked twenty-five minutes to our hostel. The weather was relaxing with the birds chirping, the spring smells become more present, and we enjoyed the happiness and laughter among the group. 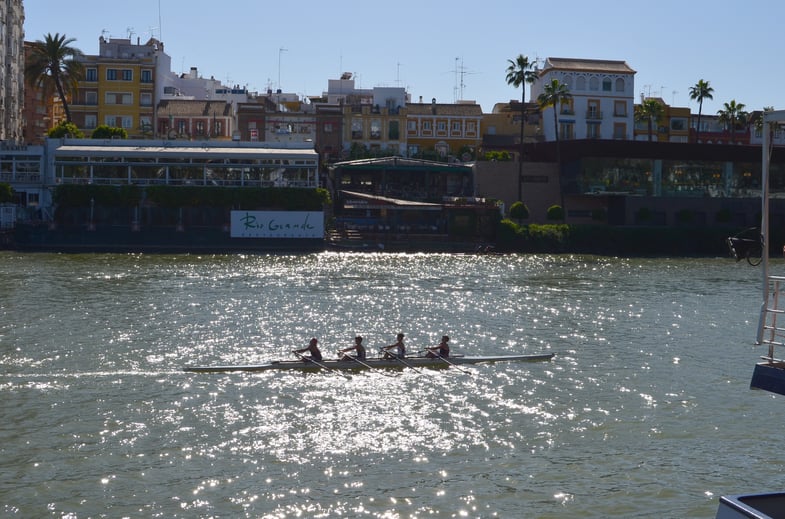 Sevilla is on the Guadalquivir river, an important port since at least Roman times, still navigable from the Atlantic for small, oceangoing ships.

Our first trip of the Sevilla and Cadiz excursion would be the Plaza de España in the afternoon. 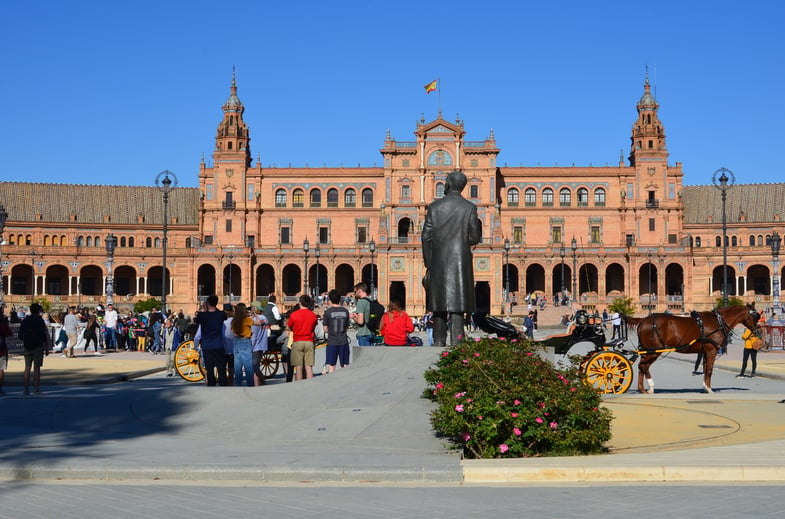 The Plaza de España was stunning, with beautiful replica of Moorish/Islamic architecture. Around the palace were benches representing each providence that is in Spain. There are fifty provinces in total, and we found the Segovia one. To finish the night, after going to the Plaza de España, we went to Pimentón for dinner which provided Andalucían traditional food.

On Friday, Ryan decided to go to the Roman ruins in present day Santiponce, originally called Itálica by the Romans, which was a half an hour bus ride from Sevilla. These ruins is the oldest Roman settlement in Spain. The location of these ruins is close to the last battle of the Second Punic War when the Carthaginians were defeated by the Romans.

The amphitheater, a part of the ruins and in the picture below, was one of the largest amphitheaters throughout the Roman settlements in Spain. The animals were kept underneath the floor including lions, tigers, and bears for Romans to fight. Although, the amphitheater has lost some of its height, archeologists think that this amphitheater could fit 25,000 people.  The amphitheater was used for entertainment for several centuries. The purpose of the entertainment was to bring people of all cultures together, promote Roman culture, and support the economy.

The amphitheater was located on the outside of the settlement, meaning the gate in the picture below is the entrance to the oldest part of the city. The settlement is located on hill and was surrounded by a wall to provide security and safety from rival cultures. 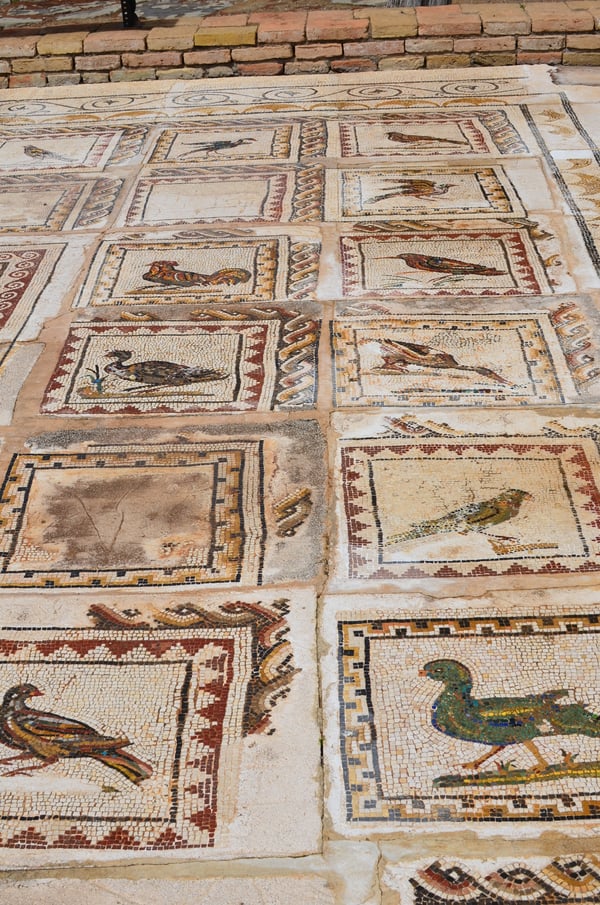 These pictures show the preserved areas of the houses where the wealthiest people of the Roman times lived, with a quad or courtyard in the middle of the settlement. Mosaics were used for decorations of floors and walls.

The public bath house, shown in the picture below, is is a total of 32,000 square feet, making it the largest building in Itálica. Areas included a “frigidarium" (cold baths), ”tepidarium” (lukewarm baths) and “caldarium (hot baths). There were also exercise areas, a library, and a sauna.

After leaving the oldest roman settlement, many group members were interested in traveling to a bullfighting ring in Sevilla, a place no other group has toured. This was a massive structure and is much like a modern day amphitheater. Bull fighting is traditionally a very popular sport and still is for some Spaniards. This sport started with the Iberians, perhaps, but became popular with the Romans. The beautiful gold decorative carvings of the bullring chapel’s baroque altarpiece is something that stood out to me while touring the Plaza de Toros. 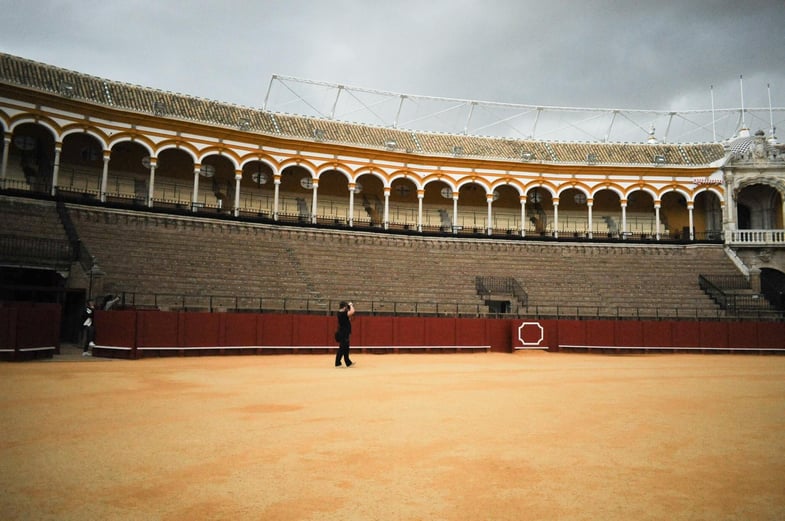 A Francisco Goya sketch of a bullfight.

The next morning we went to Alcazar de Sevilla which is a fortification and palace first created by the muslim Caliphate of Córdoba around the 10th century C.E. during what the Spanish Christians called the “Reconquest” period.

“The Moors” came from North Africa to the Iberian Peninsula and pushed the Visigoths out. The picture below, show the only remaining parts that the Moors created. The rest of the building looks like Islamic architecture but was built during the period of Christian control. The Christians took back Sevilla from the Moors and were amazed by the Islamic architecture. The Christians wanted to continue designing and building in this style. Muslim artisans living in Christian Sevilla constructed much of the Alcázar. 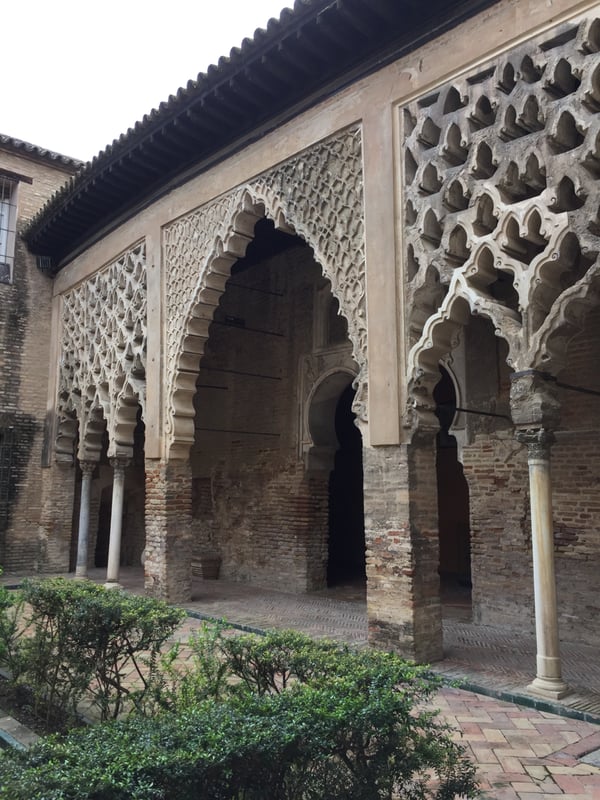 This patio, in the picture below is Islamic architecture built in the 1300s. Geometric patterns, Arabic phrases, and stylized “vegetal patterns” were present in their architecture. 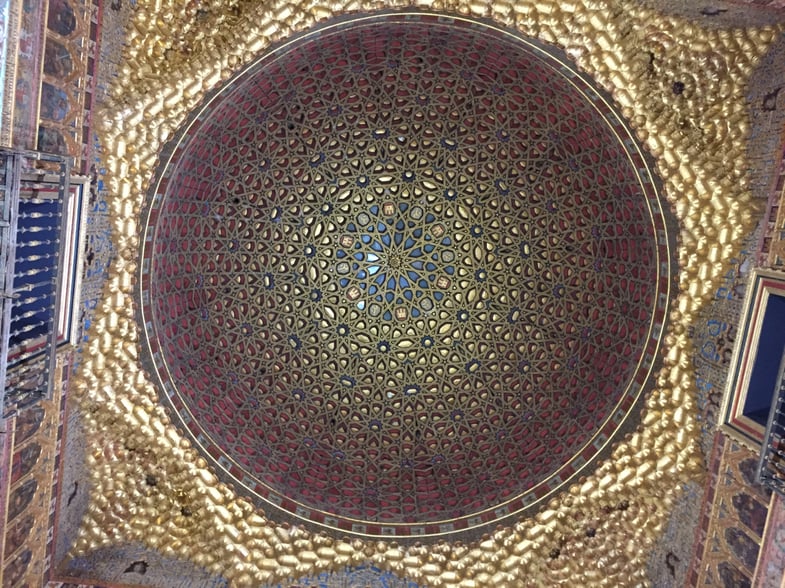 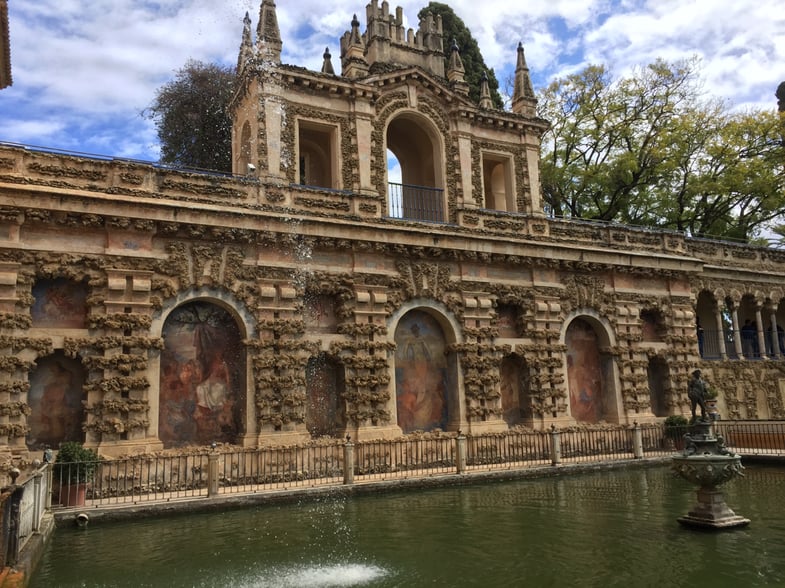 This patio of the Alcazar was completely redesigned by the Christians in the 1800s. (Photo credit: Mary '19)

In the afternoon, we visited a cathedral called Cathedral de Sevilla. The cathedral was a Gothic design architecture, with massive stained glass windows, and a noticeable height of the Cathedral. This cathedral took approximately 100 years, between the early 1400s and the 1500s, and it is the largest Gothic cathedral in the world. The Cathedral was and important symbol of Roman Catholicism as attempts to convert Muslims and Jews picked up.

Underneath this tomb sculpture is where the remains of Christopher Columbus are buried. Although Columbus is a controversial character due to his charges of murder against indigenous people on his expeditions and charges of disobeying the King and Queen orders, he is buried in the Cathedral since Sevilla was the main trading port with the Americas from the 16th to the 18th centuries. Columbus voyages opened up new trading routes from Spain to the Americas and this was significant to Spanish history. 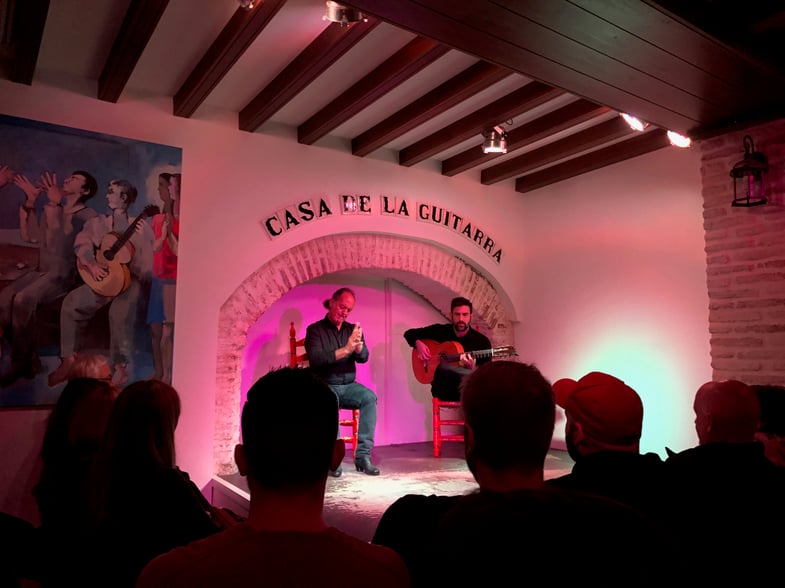 We went to Flamenco show to end Saturday night on a good note. Flamenco is a popular dance, singing, and guitar with Muslim, Sephardic Jewish and Roma (Gypsy) roots. The purpose of the show is for the performers to express their emotions to the audience. The group enjoyed watching a major aspect of Spanish culture.

We left Sevilla right after breakfast around 10:30 am to catch our train to Cadíz for the last two days of the trip.   When we arrived, the entire group had the chance to go to the beach which was really fun. We all took the risk to swim in the ocean with cloudy and 61 degree weather. 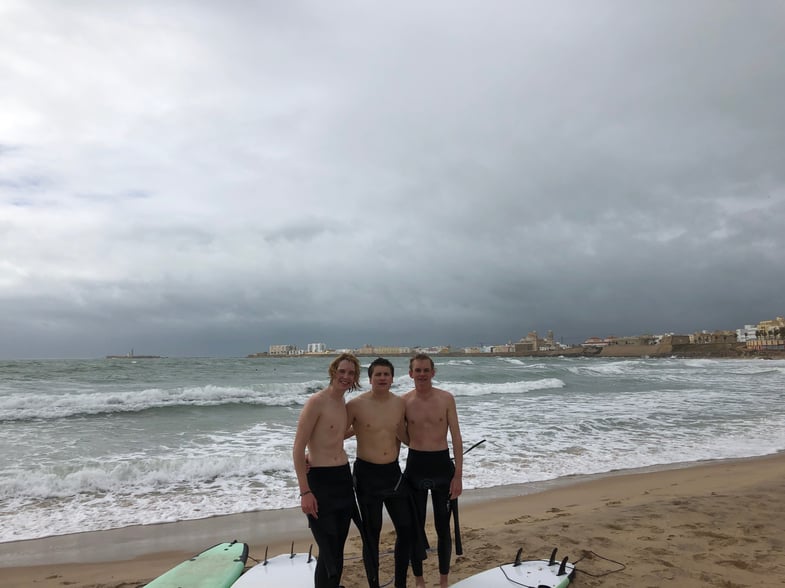 And some students decided to surfear!

In the late afternoon we decided to go to Torre Tavira, a watch tower. Below, is an amazing view from the top of the tower. It was very peaceful looking at the boats in the harbor and the red roofs with white siding on it. 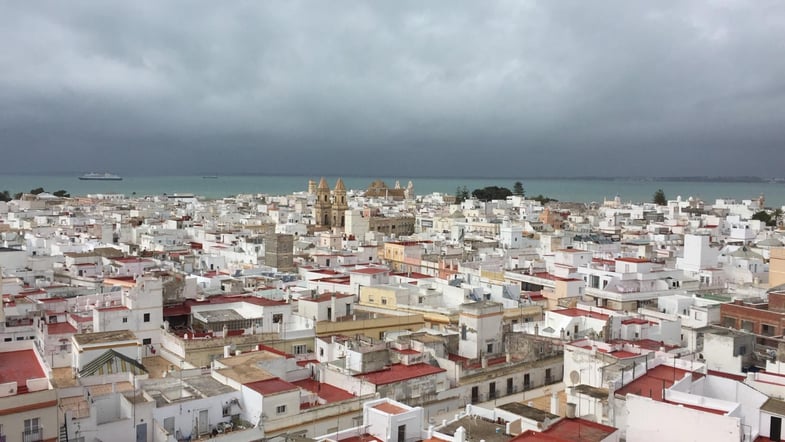 We had a few hours before beginning to travel back to Segovia. Ryan decided to take us on a walk to the small church where the first constitution of Spain in 1812 was signed. The current constitution was written after the dictatorship of Franco.
The French controlled Spain during 1812. However, Napoleon never took over Cadíz, which is where members of the parliament fled to during the occupation and wrote the constitution. The constitution was trying to disband the monarchy, creating universal voting rights to males only, reduce the power of the Church, and more. The constitution only lasted for two years. We continued to walk along the coast to Castillo de Santa Catalina. This castillo was built in the very late 1500s to protect Cadiz during periods of tension between England and Spain after the Spanish Armada war. England’s navy was on the rise and the Spanish navy was declining. Before we left Cadiz to head back to Segovia, we stopped at the market to grab food before 6+ hours back to Segovia. 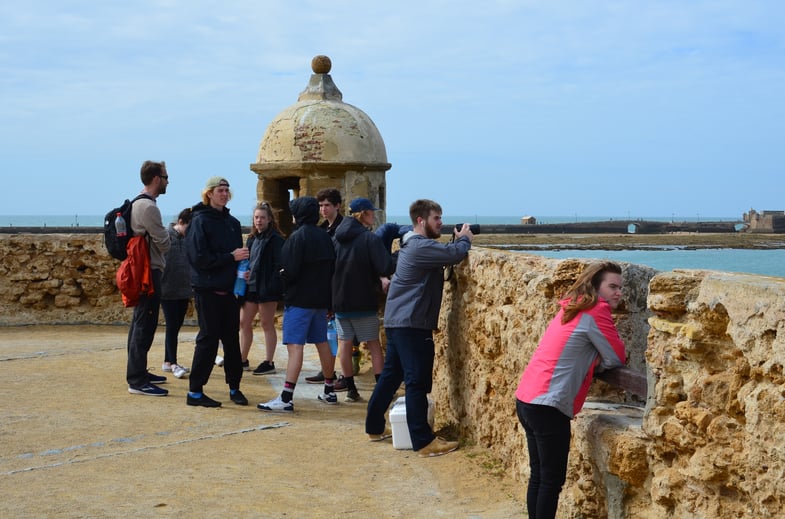 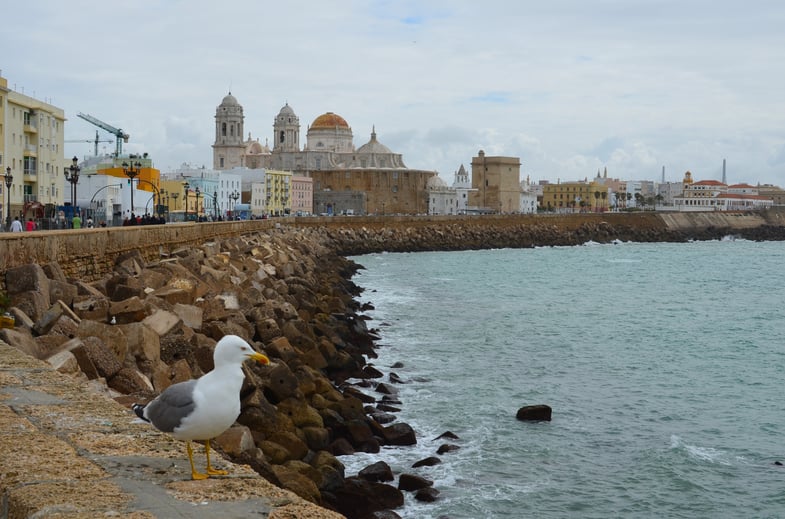 The moment I stepped off the train in Cadíz, I could taste the salt in the air carried through the streets by a crisp sea breeze. This coupled with the light mist falling from the mottled gray sky was the unmistakable feel of the sea and, to me, of home. Standing above the gray blue waves breaking upon the ragged coastline, I felt almost as if the rumble and hiss of the break was welcoming me home and gently chastising me for staying away so long. For a while I stood there reveling in the exhilaration and clarity of mind carried upon the cool, salt-laden air, and the forever beckoning waves drawing my eyes and my heart toward the horizon, daring me to cross it, to challenge the infinite might of the sea, all its storms and secrets. At that moment there was nothing I wanted more than to sail into a storm with a cocksure grin on my face.