Although I arrived a day late and missed an exciting day in the Roman ruins of Itálica on Saturday, I can say without doubt that the weekend excursion to Sevilla was my favorite thing that we have done in Spain so far. From the moment I arrived, I couldn’t contain my excitement to see if Sevilla lived up to its reputation of relentless zest for life and heavenly Mediterranean climate. As Laura and I entered the city and made our way towards the hostel, my excitement manifested itself into frustration. The only thing separating us from the 65 degree weather, the glow of the city under the siesta sun, and the equally vibrant people and colors painting the city was an Uber window. 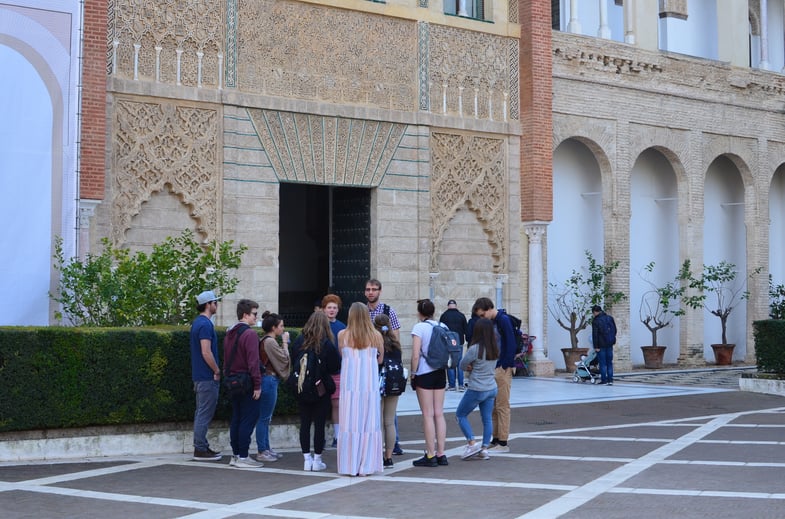 However, the city really came alive after 8pm, or 20:00, if you will, as restaurants and bars spilled out onto the streets, and the daytime sounds of horses trotting transformed into resounding guitar strums and street performers. Our first glance at this was en route to a flamenco show which was enlightening to say the least. However, as a heads up to those who have not seen this art form, if you have any sensitivities to stimulus or noise you should prepare yourself accordingly. The flamenco performance was incredibly impressive and provided great cultural context to the struggles of oppressed minorities of Spain (Moors, Jews, and Roma people). The clapping, snapping, and clopping of the dancers will echo in my mind for a time period that is still being determined.

After the show, we went to one of the many classically Spanish dinners we have experienced this term. Our dinner at a tapas bar was tasty and lengthy, and it perfectly encompassed the mediterranean diet, offering caprese salad, croquetas, goat cheese bruschetta, salmon for some, and a healthy serving of olive oil and bread. However, our late nights and miles of walking did not slow down our exploration of Sevilla on Sunday.

Our morning fatigue was overcome by pastries and a visually stimulating outing to the Alcázar of Sevilla. Yes, tours of cathedrals and castles usually are boring and repetitive in sight with dark and heavy structures that epitomize the misery of life and the religious and racial discrimination of the dark ages. But this castle defied every instinct I had to label this “layer of history” boring or irrelevant. 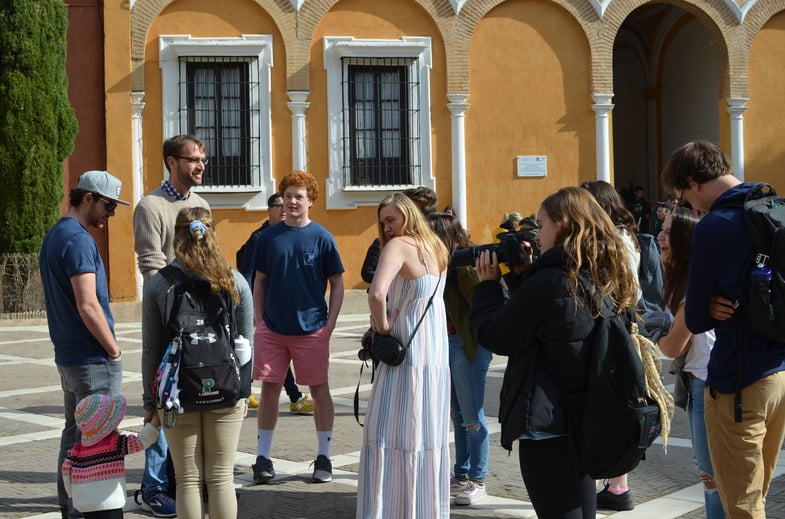 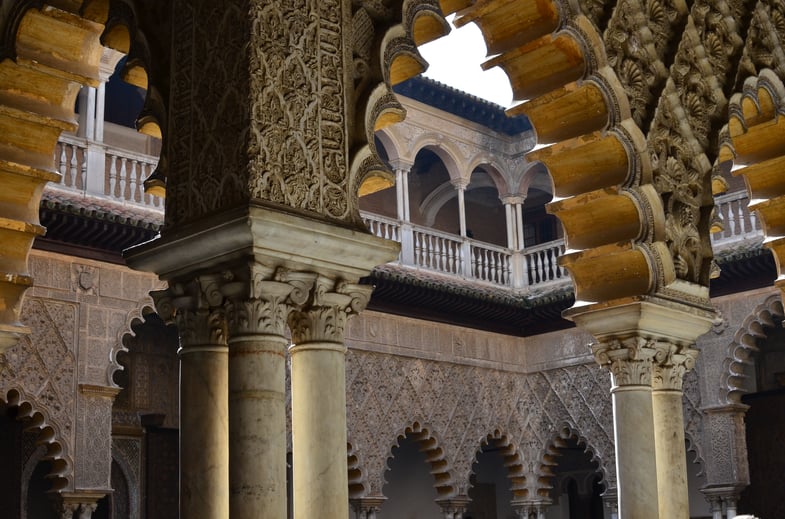 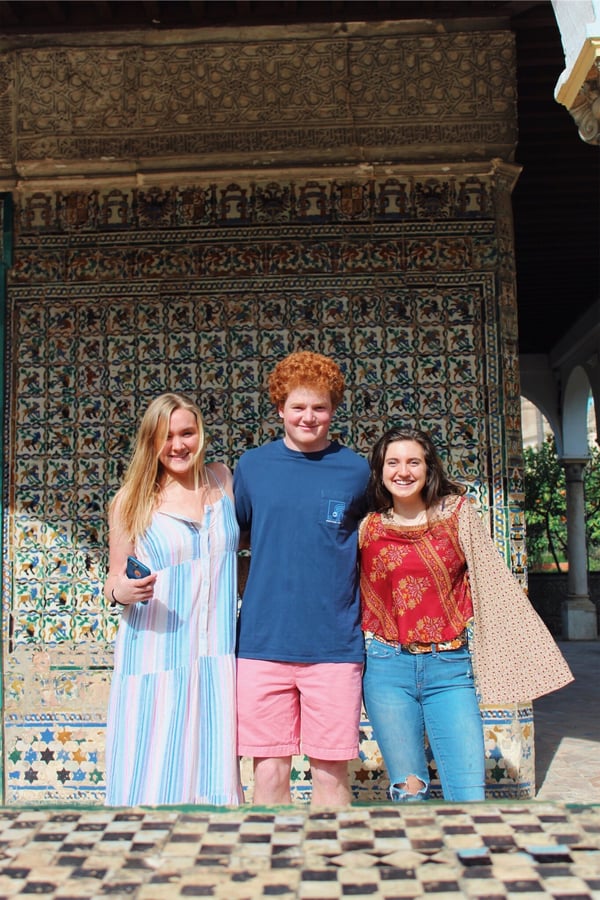 The palace, which is a blend of Muslim and Christian design, included everything from koi ponds, peacocks, and gardens of endless oranges to beautiful tile work covering the walls, begging to be captured by plandids, candids, snap stories, and herds of touristic selfie sticks. 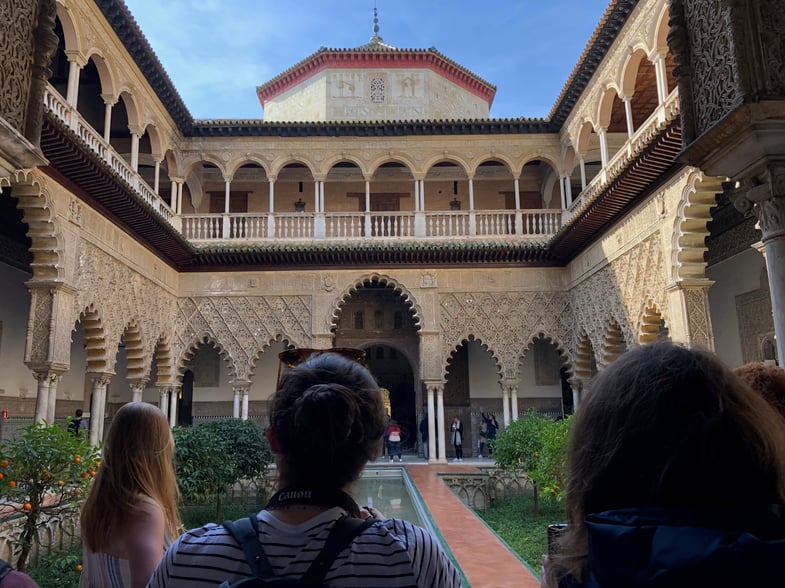 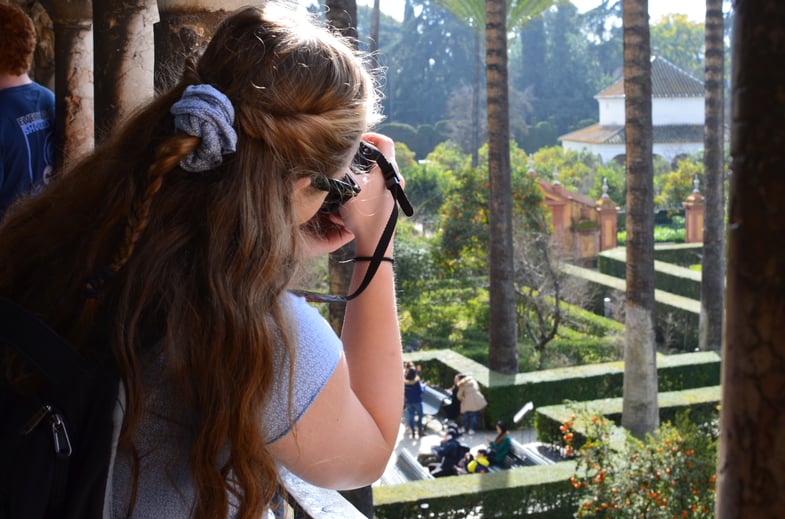 After witnessing this work of art, we toured La Giralda, the portion of Sevilla’s Catedral that was transformed from a mosque into the current day Roman Catholic landmark. Following our hike up 42 levels to reach the peak of La Giralda, we took a siesta to nap, wander, or eat. Finding a hidden gem, tucked away on one of Sevilla’s side streets, we ate Sevilla’s take on Italian cuisine. After stuffing ourselves with more caprese, pasta dishes, and of course, a healthy serving of olive oil and bread, we were sent into a food coma that provided a great night’s rest.

View from the top of La Giralda (the bell tower of the Cathedral of Sevilla).

Monday, our last day in the warmth of Sevilla, we took a walking tour around Sevilla’s bullring, a farmers market with overflowing fresh produce, settled for lunch by a tributary of Sevilla’s famous Rio Guadalquivir and then returned back to our home in the north, Segovia. 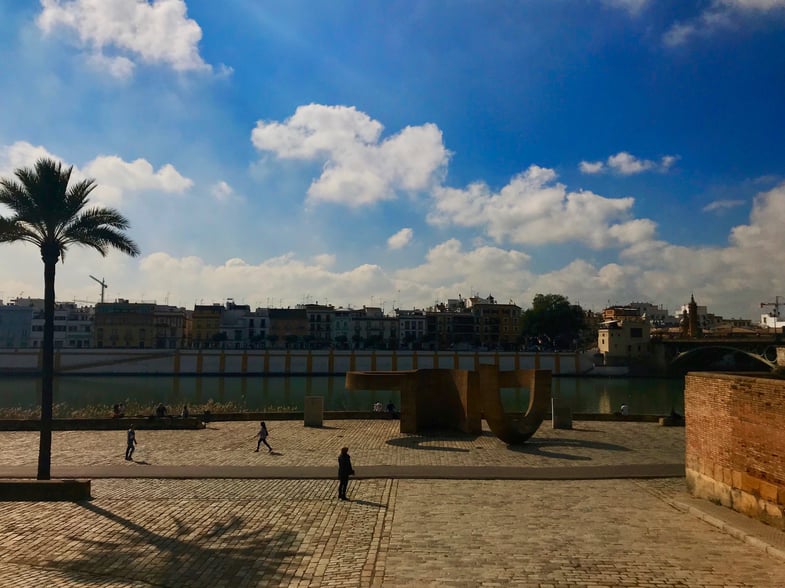 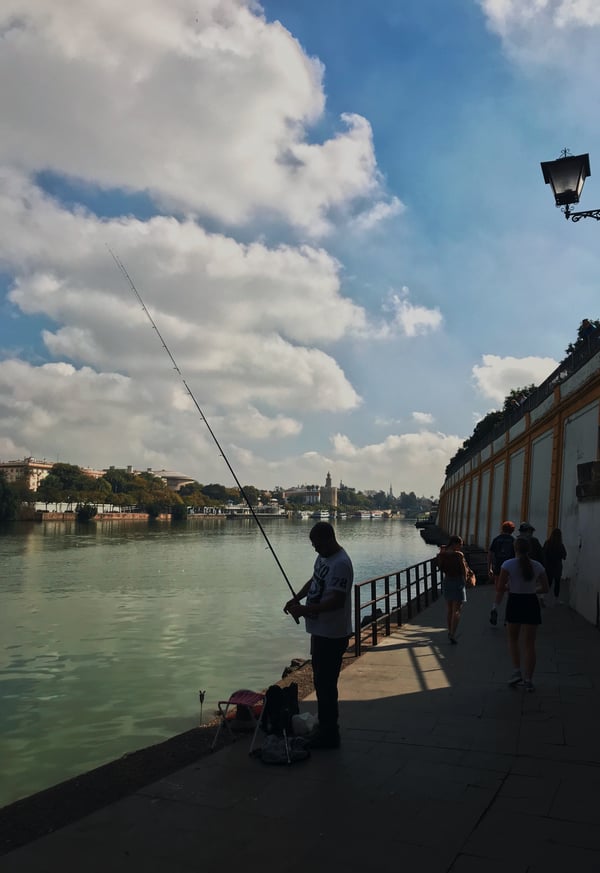 ¡Hasta pronto! Look for our next post coming soon about our adventures on our final excursion of the term to Málaga and Cabo de Gata National Park in Almería province.