Mountain Classroom left Arizona bound for San Ysidro, CA, which is the busiest international border crossing in the world with more than 17 million vehicles and 50 million people crossing each year. Patty Pond, our Mountain Classroom Director, joined us for the weekend organized by Centro Romero’s Carlos Correa Bernier and Dan Romero. We spent our time learning about the nuances of life in the border region through the perspectives of a local police officer, border patrol agents, and individuals who immigrated to the US. At the end of Alfie's '18 blog below you will read about Santiago from Venezuela who just started a "FundMe" campaign to which we hope you will consider supporting. In addition, throughout the term we have been challenging ourselves physically with our daily morning exercise. This weekend our training culminated with all of us running a 10K in San Diego.

Centro Romero is housed in a little building tucked deep inside a small San Diego neigborhood. It was our base camp for our Border Awareness weekend. Dan and Carlos greeted our large group, plus one this weekend with the wonderful Patty Pond visiting us, with open arms and a smile mid-Saturday morning. Eagerly we all sat down, still very exhausted from running the “Super Run 10K” just hours before. During the lag time between arrival and a delicious lunch made by Carmen, a Centro Romero volunteer, Dan and Carlos gave us a quick run down on how our two days together would go.

First on the list was a presentation by two Border Patrol Agents. I was stoked when I realized we were actually having lunch with them. I was one of the lucky few that had the pleasure of eating chicken fajitas with Saul Rocha. Saul became a Border Patrol Agent in 2007, after spending years as a Marine including two tours in Iraq. Two awesome professions but what shocked me about Saul the most was that he was born in Mexico and immigrated to the US at age 16 with his parents. In between bites of fajitas, Saul told us that when he came to the US he only knew two English phrases: “thank you” and “you’re welcome.” Thankfully his English vocabulary has increased tremendously so he and Amanda, the other agent visiting us, could give us an awesome presentation about protecting the border in the San Diego District. They showed us pictures of agents on horseback and ATV’s and told us about the challenges of finding tunnels made by cartels to smuggle people and drugs. I thought the presentation had turned onto thin ice when someone brought up the new border boundary: “The Wall.”

Politics has become one of the worst topics to bring up in any social gathering so I was concerned that extra tension was on its way. I was also very wrong. Who would have thought that talking to people who actually know about the wall would be so informative and fun. I’m still not sure why I just used fun and politics so closely together but getting first hand knowledge was incredible. Once the presentation had ended and the questions had been answered I was delighted to shake hands and say thank you to both Saul and Amanda. I have always had an incredible amount of respect for any individual involved with law enforcement or the military and I happily took the chance to show them a little appreciation.

Our first day at Centro Romero wrapped up with a trip to Las Americas, a small shopping plaza just mere feet from the third layer of fencing that line that section of our border. Through the holes in the fence and past a Border Patrol SUV we could see a Mexican town on the far side of the hill. 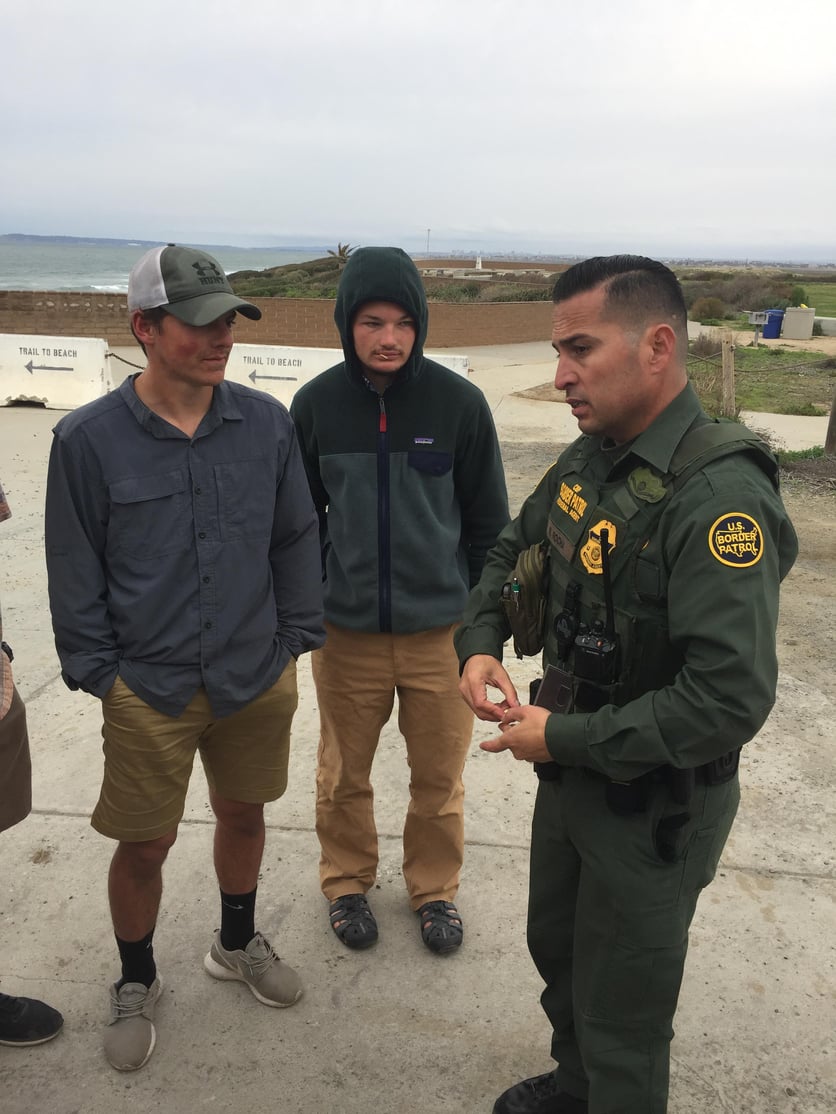 Sunday rolled around and we had an awesome line up of presentations. Carlos started us off with a presentation about Centro Romero and their numerous programs like “De Hombre a Hombre” and “De Mujer a Mujer”. Both of these programs are designed to be support groups for the men and women of the Chula Vista and Tijuana communities. To fill in our day there was another presentation from Jose, a Chula Vista police officer. I was so surprised that even though he patrols the same geographic area as Saul and Amanda, Jose’s law enforcement role was completely different. Jose’s focus while on duty has almost no concern to undocumented people, which is the complete opposite from Saul and Amanda.

We also listened to an amazing story from a 17-year-old boy from Venezuela named Santiago. Due to his family’s political views they had to live in constant fear of assassination and death threats. Thankfully, with the help of Cento Romero, Santiago and his mom are in the process of gaining political asylum here in the States.  All weekend long Dan and Carlos were telling us about a park that was in between the US Mexico border called Friendship Park. Years and years ago families from both sides of the border could gather in this park to exchange hugs and birthday cakes. We got to visit this park on a cold, rainy Sunday afternoon. Security has increased since the time of Dan and Carlos’ stories but nonetheless it was incredible. We also got to see Saul again. He happens to be in charge of opening and closing the gates to the park every Saturday and Sunday. Border Awareness weekend was incredible and the whole group agrees it was a weekend full of lessons we will never forget. 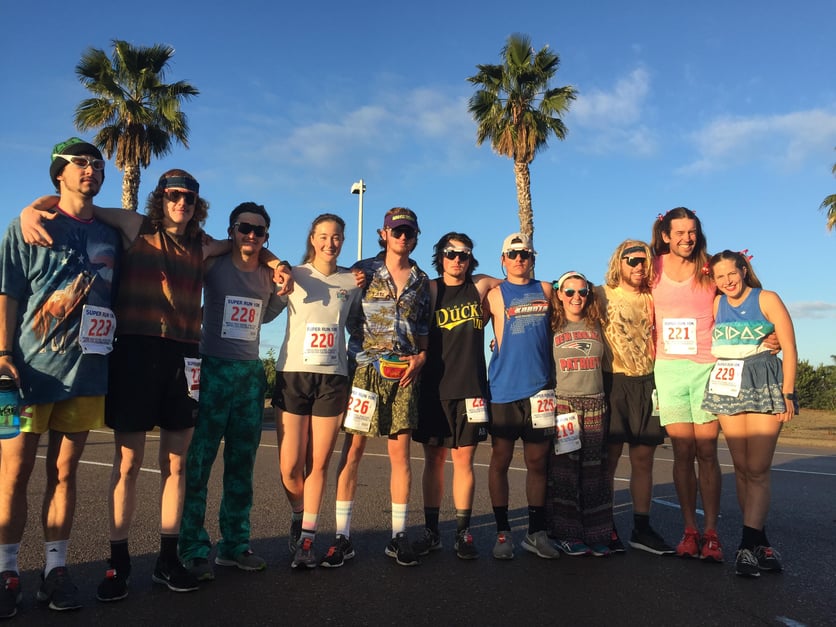 Mind over matter. This phrase was introduced to me during my freshman year while playing for the Proctor Varsity Basketball team. Those words got me through seemingly endless sprints and would eventually get me through my first 10K. After battling Lyme’s disease, which took a toll on my body, I’d always taken it easy. I have been afraid to push my body to the limitations I thought I had. It turns out that limitations only hold you back if you let them. Physical challenge is more of a mental feat than anything. If your body is saying no, what will you say back?

I said yes on February 4th, 2017 at 7:30 am as the sun rose to the familiar ring of the national anthem. Yes, I would believe that I contain enough strength to do this. Yes I would destroy the idea that I can’t. Because I can, and after that race I’ve never felt so sure that I can. 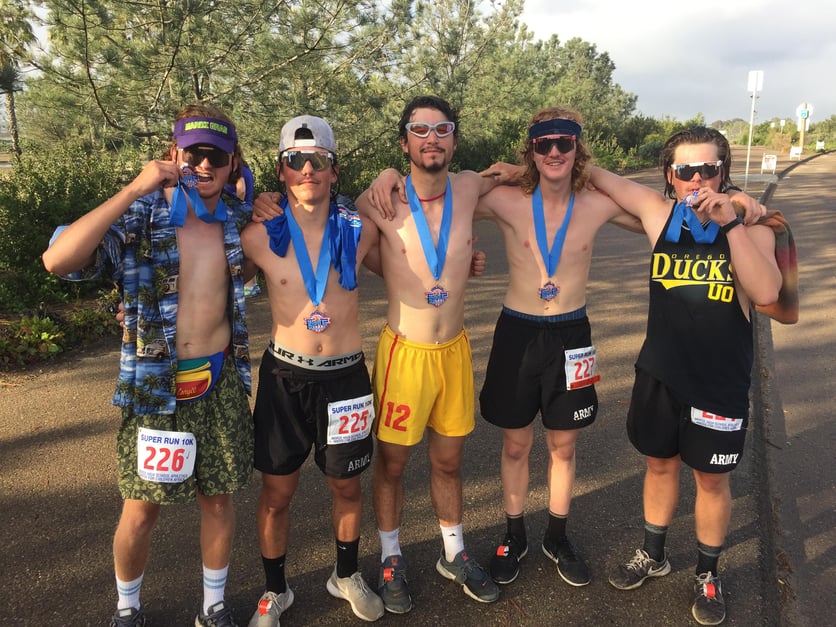 As the starting shot fired I repeated the hopes I had for myself in my head. We were asked by Coco and Timbah to set personal goals for the race that would require physical and mental adversity. Originally, I deemed not walking once to be a sufficient goal but then I decided I could do better. I would aim to run my first 10K in an hour or less. Once I set off, with those intentions in mind, it took 11 minutes for the physical challenge to begin. My forever faulty hip flexors and cramping calves took hold but I told myself that it would go away if I just kept running. Suddenly it became entirely a mental battle. I had set goals and I wasn’t about to give up on them too soon. With each new turn in the course I was rewarded with new sights: the glistening Pacific, massive trees, impressive bridges. Encouraged by the surrounding beauty (and my own stubbornness), I kept fighting to surpass my threshold. When I crossed the finish line I was so incredibly proud of myself for completing my first road race that I never even considered rankings.

I was halfway through a delicious, post-race almond butter bar when I saw a large gathering of people huddled around a board, trailing their fingers over text. Curiosity always gets the best of me so I went to investigate. As I scanned for information I saw Jon Tilton in third place for the “Males 13-17” category, Timbah had placed first in his age group, and finally the “Women’s Age 18-24” section caught my eye. Still proud of my own personal achievement I wasn’t going to let rankings crush my newly discovered runner’s high. But there I was. Catherine Doheny, 3rd place. Never had weak legs and tired lungs felt so rewarding.