Proctor Academy's Mountain Classroom ventured north from the Grand Canyon to Moab, Utah where lessons in permaculture lay the foundation for the remainder of the term's exploration of food sources and agriculture. Read more from Sage '18 and Sophie '18! 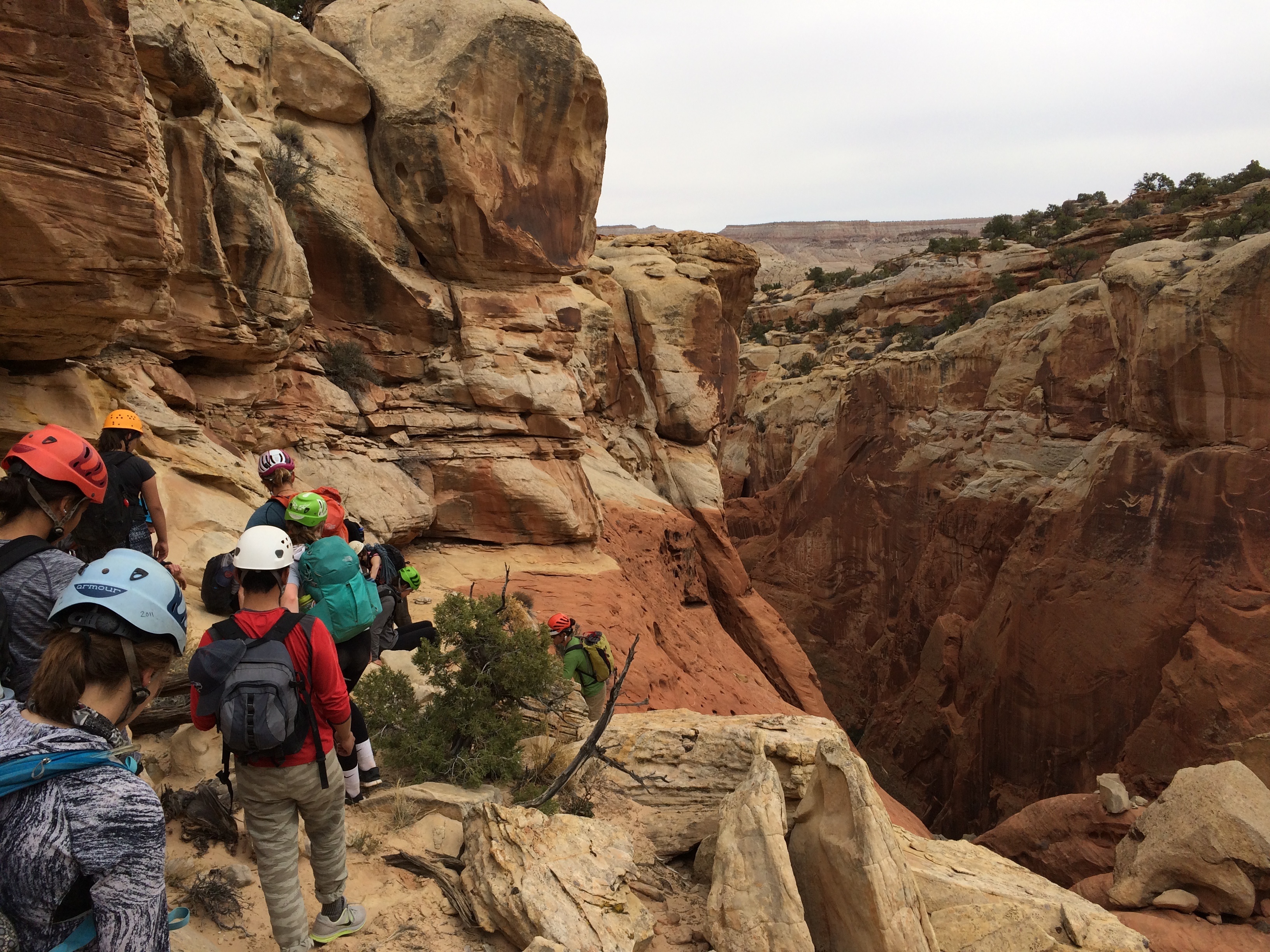 Last week began with a drive from the Navajo Nation up through the varying landscapes of long desert vistas, palaces of tall windgate sandstone towers, mesas covered in juniper trees and prickly cacti, and finally into Bears Ears National Monument. We did not stay for long, but we did head over to the Kane Gulch Ranger Station to hear about the politics surrounding Bears Ears. It was declared a National Monument in 2017 because of the important history found there. What I love about Bears Ears is that it does not have the most spectacular views in the southwest, but there are hidden secrets to it. There are stories of people sitting down to take a water break during a trip, looking over, and seeing a perfectly preserved Anasazi pot hiding under a rock. Since its establishment, Bears Ears has been reviewed by the government and has shrunken by about 85%. We listened to podcasts and heard people’s perspectives on the value of the land there, it’s interesting to hear the different opinions on Bears Ears. Some people are very against all of the BLM and campsite land becoming a protected wilderness area and already believe that BLM land is protected enough. However, I stand with the people that believe uniting all of the BLM land, wilderness sites, and unprotected land into one monument. Conserving land that provides educational and cultural value just makes sense.

On April 4th, we reached the site of our next expedition: Capitol Reef National Park. One of Kate’s friends, Adam Pecan (is it pronounced pee-can or pee-cahn? We will never know...) who is an Outward Bound instructor, joined us at our campsite as our canyoneering guide for the upcoming week. The first afternoon we spent learning knots and doing group bonding activities. The next morning, we set off to explore our first slot canyon.

There is such an indescribable beauty of being able to see history up close.You can see every layer of sand that was packed down and know that it took thousands of years to form. Then water found a way to slice through it and form cracks, sometimes just barely big enough for our chests to slide through. The walls bend and flow. For those four days, we spent hours letting our hands feel the smooth sandstone on either side of the canyon walls, crawling under wedged rocks, and being mesmerized by the strange formations water can make. On the second day, we hiked up to one of the mesas in Capitol Reef and dropped into a canyon. Our group was taking longer than expected and there were about eight rappels throughout the 3 mile slot. At about 3 pm, everyone began to whisper about how hungry they were. At about 4 pm on our hike back up to the mesa, our group learned an important lesson: don’t just bring lunch, bring plenty of snacks as well. It took much longer than expected to finish that second day because we did not plan ahead and bring enough food to keep us energized. When we returned to camp, we ate our hearts out and knew that we would never make that mistake again. That night, our instructors presented us with a choice: a 13 mile day in a canyon or an easier day. Our group, knowing the responsibility and the energy it would take, accepted the challenge of hiking Cottonwood Wash, the 13 mile day. The big day began with an alpine start. At 3:45 AM, we packed ourselves into Deb (our bus), ate breakfast on the go, and got pumped for the day. It was an insane day. We brought plenty of snacks and positive attitudes: the perfect recipe for success. One of the best moments of the day was one of the final rappels. The first portion of it Kate used her body to hip belay us down a chimney where we stemmed our hands and feet on either side to help us shimmy down the wall. After we scooched down onto a rock that was wedged between the walls, Adam attached us to safe line where we then stepped onto a different rock. That gap between these two rocks was about 3 foot step, with at least a 40 foot drop, and we had to share the second rock with Adam. It was awesome. From there, we rappelled down to the bottom. Our hardcore group destroyed Cottonwood Wash.

But that is not the end of the story. That night, after being awake since the early morning, we were presented with yet another opportunity: to attempt to summit the highest point in Capitol Reef. The whole group was for it, but there was one concern. We had eaten all of our snacks during our long day in the Cottonwood Wash. So Alex, Sam, and I devised a plan. We took every leftover ingredient we could find, like pancake mix and quinoa, and invented “the Power Cake.” After being up for almost 20 hours, we were ready for yet another big day. However, I have not told you what the best part about our upcoming challenge was. The name of this mountain we were going to summit is called Fern’s Nipple. All I can say is that the peak pretty much looks like a huge nipple. Many jokes were made. So, at 5 AM the next morning, we set off to summit a nipple. After a few hours of grinding, the last few hundred feet were pretty technical so we clipped into climbing ropes and made it to the top. We enjoyed the spectacular view from the summit and read many funny notes that people had left in a weather proof box. The oldest note we found dated back to the 70s. The hike down and the rest of the day turned into a blur for me. After not getting a lot of sleeping the last few days and feeling physically exhausted, I could not have been more excited to hop into my bag that night. However, we all fought to stay awake for the rest of the evening. It was raining during evening meeting, so we all decided to take cover in Deb. After two jam packed days, all of us were so delirious and sleep deprived that we laughed for ages about the tiniest things. Sam, the bard of the night, created the eloquent poem “an Ode to Wag Bag” (if you know what wags are, you know what they are). I am so proud of what our group has experienced this week, and it has only made our tight family that much stronger. 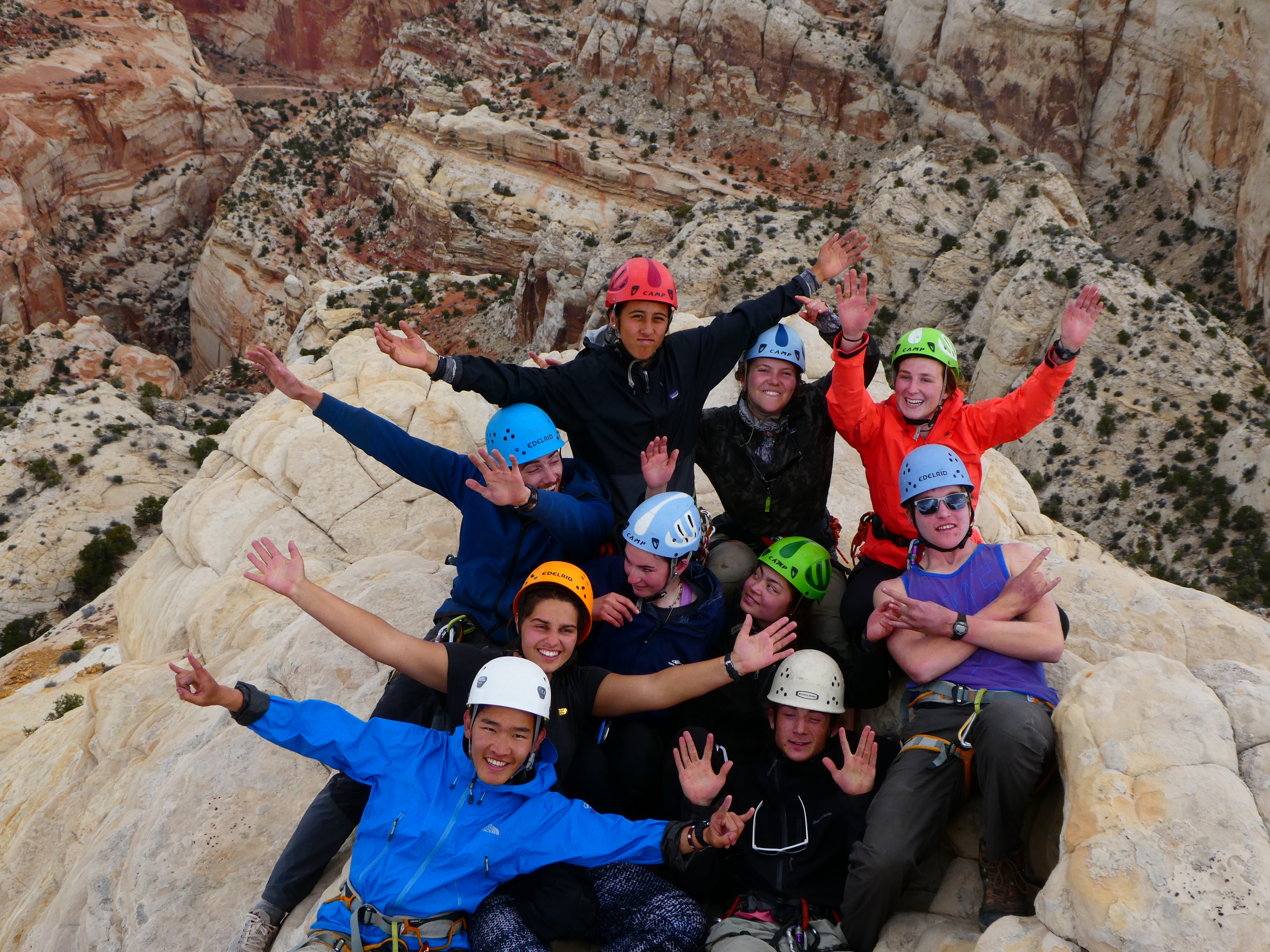 Beneath the snow capped peaks of the La Sal Mountains, we transitioned from the past few days spent exploring the slot canyons of Capitol Reef to beginning our restoration work with Moab Solutions at the Colorado Outward Bound School in Moab, Utah. With not a single cloud on the horizon to cover the blue sky, we started to work in the newly constructed garden by planting trees and spreading mulch. While working under the hot Moab sun, we look up at the base of the La Sal Mountains touching the rusty red canyons ridges. The desert canyon lands seem to brush up against the fertile alfalfa fields and agricultural ranch lands creating a view that feels surreal. All of the views our group has stared together feel like a magical dream.

During our work with Jeff Adams and the Outward Bound School, we learned about permaculture and mindfulness. We learned that the three ethos of permaculture design are “care for people, care for the Earth, and share the surplus.” On the second day of our work moving mulch piles, planting different vegetation, and watering the land, we spent two hours discussing what we each wanted to see changed in the world. We journaled about our emotions regarding the different changes we would like to see and thought about what we could do as individuals to make those specific changes. For many in our group, Moab has been as place of reflection and future decisions. Many of us are making final college decisions, processing our recent adventures in the tight slot canyons, and thinking about our impact on the environment. Jeff gave us tour of the different places around the bustling town of Moab that he has implemented different permaculture practices. Constructing different gardens helps increase the amount of places for pollinators in Moab as well as improves the amount of biodiversity. According to Jeff, there is currently a decrease in the bee population which is a keystone species that is needed to produce fruit. However, the new gardens are implemented to help provide security for the bees, filter water that would usually stream into the creeks at a fast rate after a storm, and to provide a space for non-desert plants to grow. 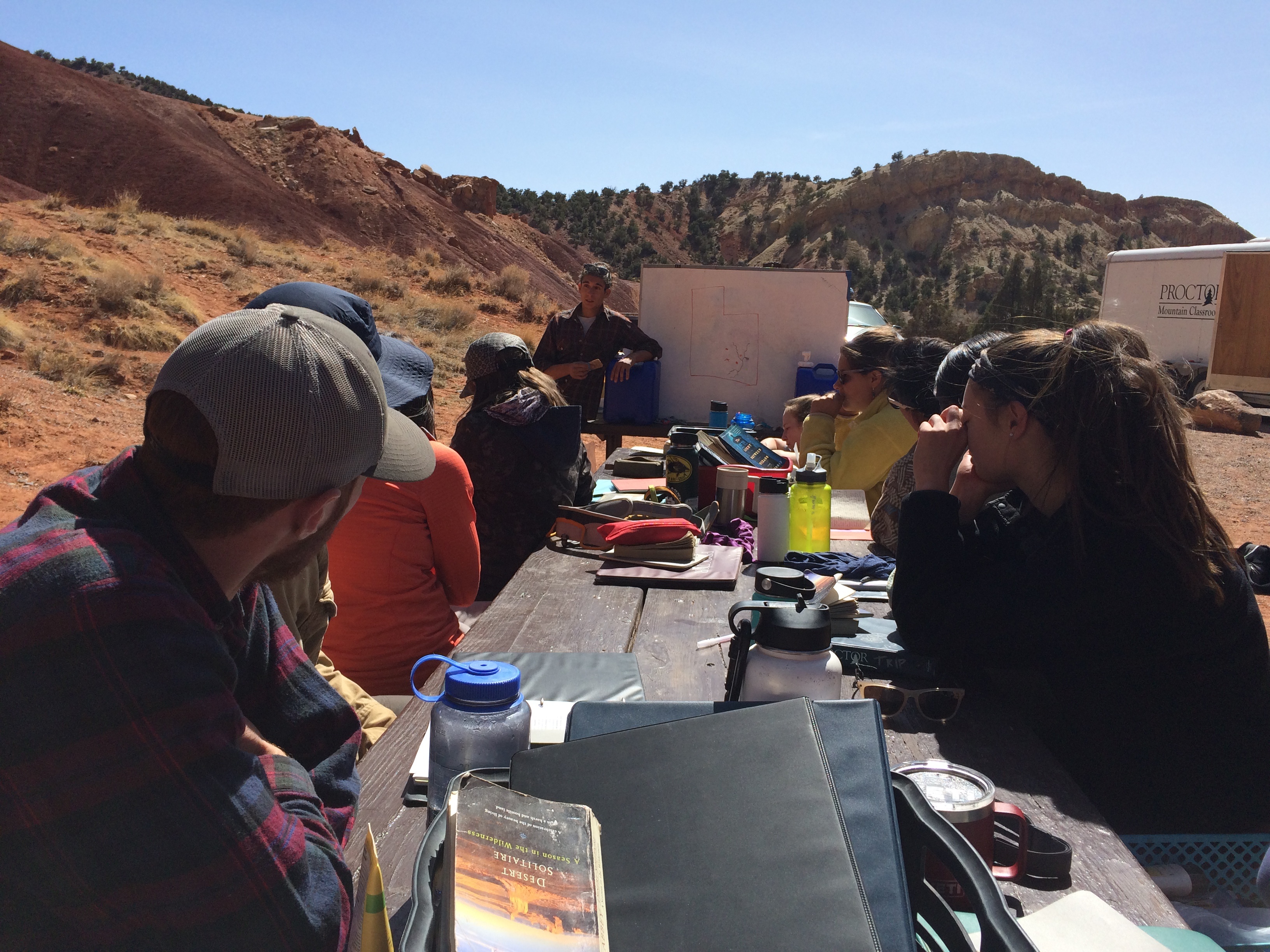 One evening as the sun began to sink down from the azure horizon and turn a golden orange, we drove up into Arches National Park. The red canyons soon transformed into dark shadows as the sun dipped lower in the west. Sitting on the rock where Edward Abbey’s trailer once rested, while he worked in Arches and wrote Desert Solitaire, we received the news that we made it into Main Phase! Above our heads the sky metamorphosed into a sheet of sparkling stars, purple streaks leftover from the rapid descent of the sun, and Venus nestled into the western sky. With the cryptobiotic soil, silhouettes of cacti, and fiery sunsets, we felt that we had jumped into Edward Abbey’s universe. After running up a giant pile of sand near our parking spot, we became allured by the presence of the stars. Alex taught us about different constellations: Orion, the Seven Sisters, the Big Dipper, Cassiopeia, Taurus, and Canis Major. We felt that we could stare of into the abyss of the universe forever as we stood arm to arm after an exciting evening of reflection and happy news.

The following day after our star gazing in Arches, we continued to work at the Outward Bound School with Jeff, Medina, Hailey, and Jazzy Jeff. On our tour through town, we stopped at a public garden, designed by Jeff, to further discuss permaculture. Jazzy Jeff brought out his saxophone and Kevin began to jam on his guitar. The pair of them had huge smiles on their faces as they played some classic songs by the Beatles and Frank Sinatra. For the biggest surprise of the our time in Moab, we traveled to an undisclosed location to see Edward Abbey’s trailer. I think Sophie went into complete shock. Not only did she get to visit the place where Abbey lived in Arches National Park, but she also got to touch his actual trailer. While the paint is now a different color than it was in the 1960s, one can still imagine all of the reflection, written words, and cups of coffee drunk by Edward Abbey in that very same trailer. With hearts full of purpose and contemplation, we began our rejuvenation day in Moab excited to write letters, catch up on homework assignments, and to explore the town. After our time volunteering in Moab, we feel more ready to take on the challenge of our river trip down the San Juan with our minds focused on the privilege of experiential learning, the use of natural resources around the nation, and a thirst for adventure!