Proctor Academy's term-long Mountain Classroom program reconnected after Winter Break in El Paso, Texas to kick off 2018 and the final seven weeks of their trip to the American Southwest. As the group camped in El Paso and discussed their upcoming adventures, illness swept through the group in epic fashion. While it was not the start they wanted to 2018, there are lessons in everything, including the flu, and the sickness did not stop them from rock climbing and exploring Gila National Park. Read Anna's '19 and Sam's '18 reflections on week four of Mountain Classroom 2018 below. 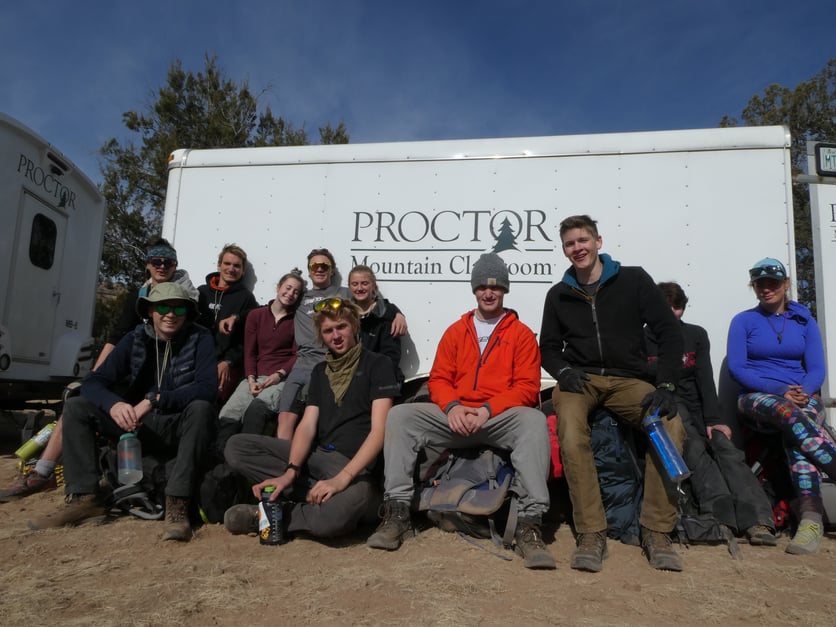 A lot has happened this week. It all began in El Paso, Texas. The group got back together with excitement for the warm weather ahead. We stayed at a campsite with beautiful vistas. We chowed down on amazing lentil soup. Many set up their hammocks under the sheltered roof and spent the night elevated off the ground. The next morning we were awoken to some members getting sick, this was the start of the Mountain Classroom Plague. Living in such a small group, it is hard to avoid the sickness. 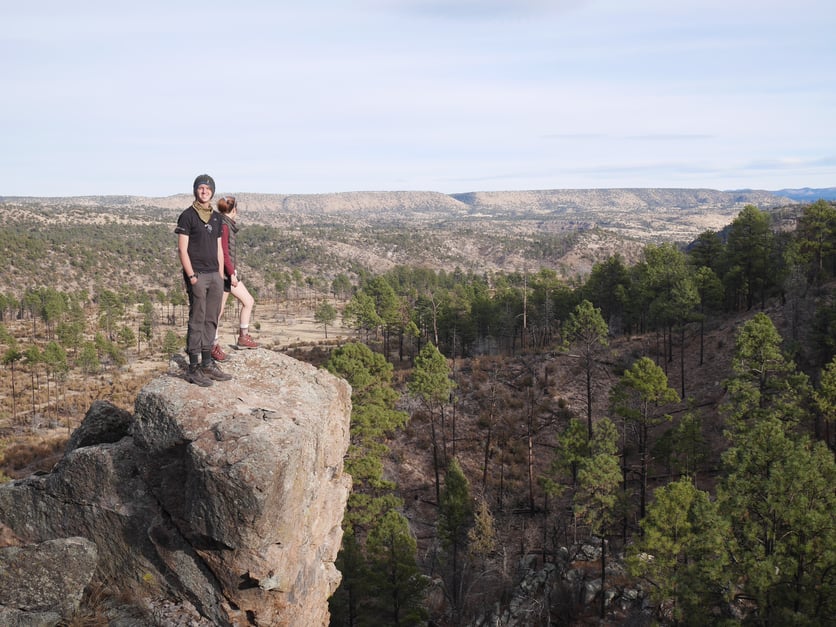 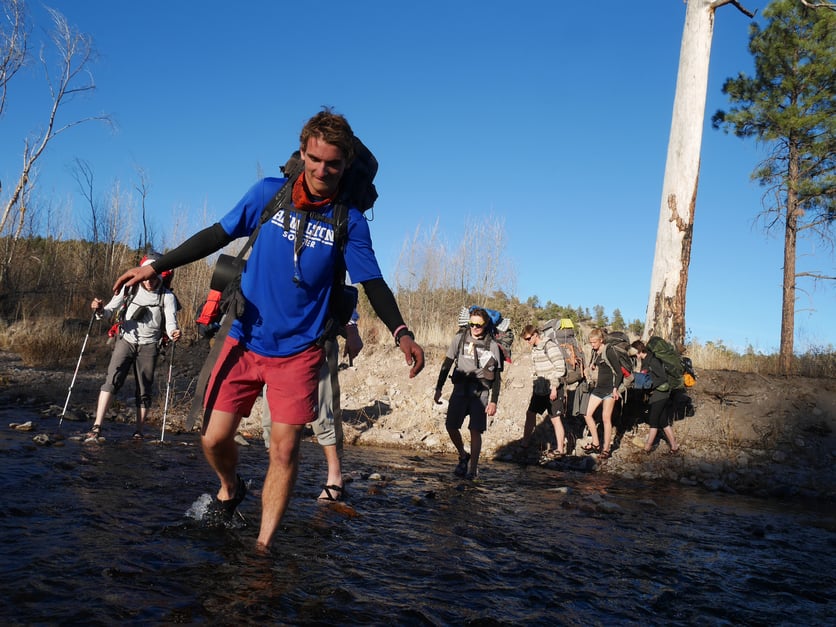 That day we went on a nature walk led by a park ranger. We found a prickly pear and cut into it and ate it. It tasted like avocado! Yum. The following day we drove to the start of our backpack expedition. We started off with our packs carrying a lot of weight. We set off into the Gila National Park. There were plenty BAM (Beauty Appreciation Moment)’s. We went on search for our campsite, but on the way we couldn’t find our trail. We found a nice place to set up our tents and spend the night though. When the scouters went out in search of the ‘lost trail’, we realized that the map we were using was dated back to 1999. So that meant that some things probably changed through those 19 years. We returned to the campsite and played many rounds of Werewolf - a card game with different characters and involves mental logic, acting and betrayal. 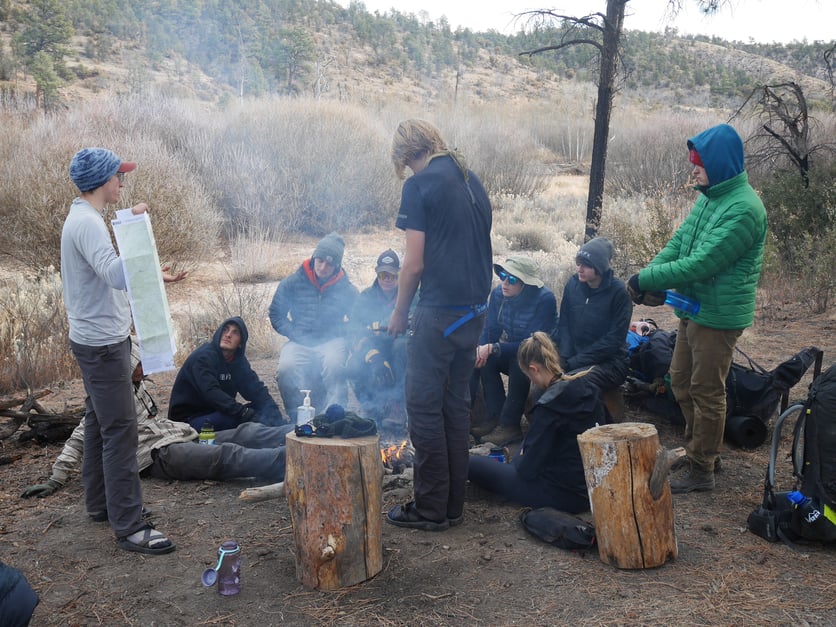 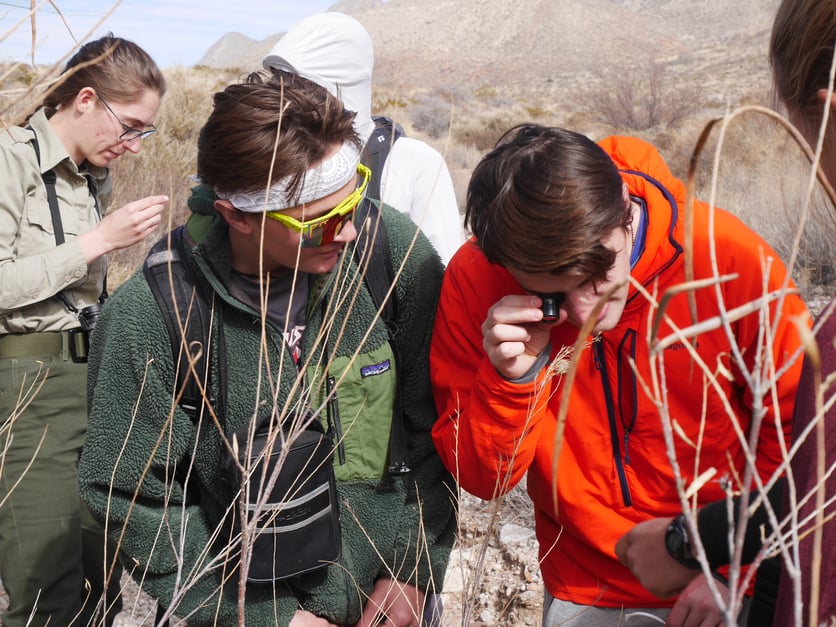 The next day we went on a day hike to a nearby cliff. We passed many spots where wildfires had occurred and had wiped out many trees. On the hike, Kate gave us a preview to rock climbing. We also practiced our freestyle skills which then resulted in a scheduled rap battle. Following the hike a few of us decided to take a dip into the freezing creek that was right next to our campsite. Another day passed and many people in the group were feeling under the weather, so we made the decision to return back to the bus and trailer. 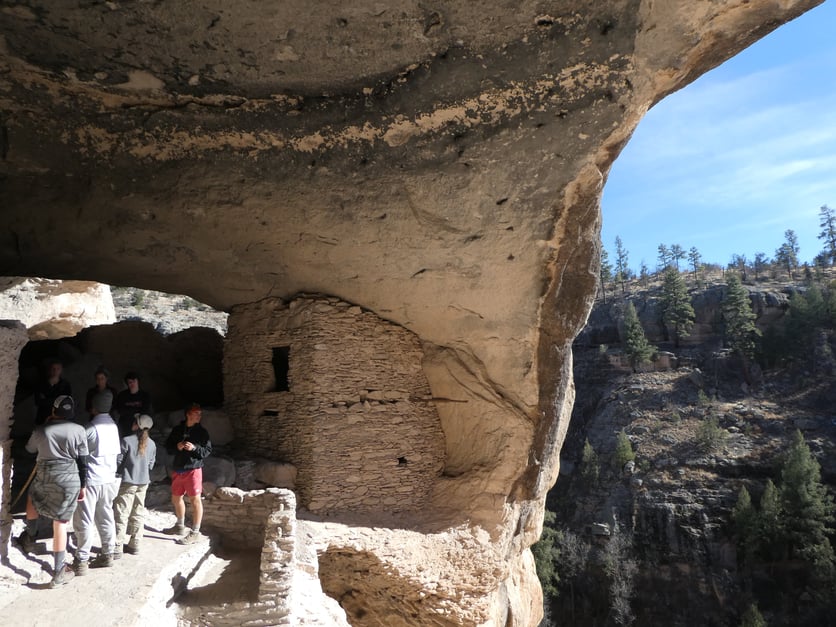 We spent the last night at a campsite located near some hot springs. As we pulled in we were greeted by a elderly woman who ran the place. When she heard that there were 10 high school juniors and seniors staying at her campgrounds, she said that she won’t hesitate to kick us out if there is any b.s. …we didn’t get kicked out, don't worry!  We all enjoyed the hot springs to there full potential. The only hard part was getting out into the surprisingly cold New Mexico night air. That night one boys tent made a quinoa dinner, the ending result was a pot full of burned quinoa. The last morning a few of us set our alarms for early in the morning for a last soak in the springs. For AMX (Morning excersise), Kate led us in a kick boxing/tai chi lesson, we now all know what to do if we are under attack. Overall, the Gila backpack trip is a expedition that I will never forget and will look back on with only good things to think about.

What an adventure we just had. It started when we drove into a little, tiny town in the middle of nowhere New Mexico. The town consisted of a funky thrift store, a hardware store, a little cafe, and a post office. The pawn shop was the winner by a landslide. There was everything from romantic novels for Augie to a new pocket knife for Anna. And yes, the pocket knife did have crossbones on it!

After spending an hour or two in the so called town, we headed to the Cochise Stronghold. We learned that it was called the stronghold because the US Army couldn't take that one valley from the legendary Native American warrior Cochise and the rest of the Apache tribe. We woke up the next morning to dark skies. We realized we couldn't climb, but our two guides Aaron (A-Dawg) and Andrea (Dre Dre) came to do a ground camp with us so we would know what we were doing more when we climbed in Cochise the next day. They left around noon and we had the rest of the day free which was spent on art, schoolwork, and Luke and I curled up in our sleeping bags and slept for much longer then we intended to. 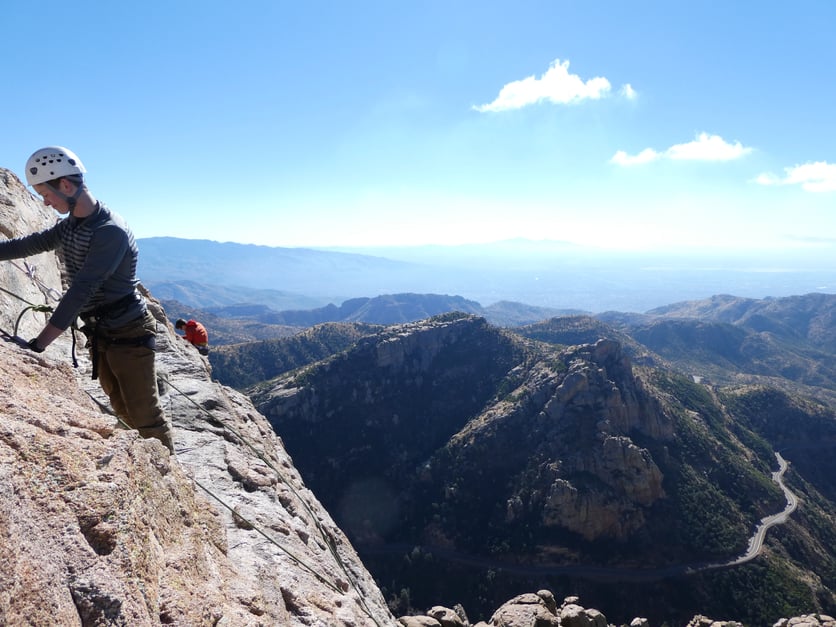 That night the park ranger let us know that our guides didn't have the right permits to take us climbing on the legendary Cochise rocks which we were surrounded by. We were all pretty blue until we heard that we were going to wake up early the next morning and head to Mt. Lemmon to climb there instead. We woke up the next morning and were highly productive and were out of camp by 8 A.M. Everyone just wanted to climb. We got a call as we were pulling out that Aaron got his permit all figured out and he could take us out after all. Aaron met us at a small coffee shop called Le Buzz which was right next to Mt. Lemmon. It looked delicious but we couldn't get anything from there that was made in the kitchen because we were going to go climbing. We drove up the mountain for about 20 minutes on winding roads. We finally pulled over at a climbing site. After a brief introduction we were up on the wall and climbing away. That first adrenaline rush I got when I climbed my first wall was like nothing I had ever experienced in my life, it was almost addicting. After a good lunch and more climbing in the afternoon we headed down the mountain where we found a nice campsite and set up tents. We had a fire and had a long talk which brought laughter and tears from multiple people. You can feel our group coming closer and closer together every day - it’s an awesome feeling. 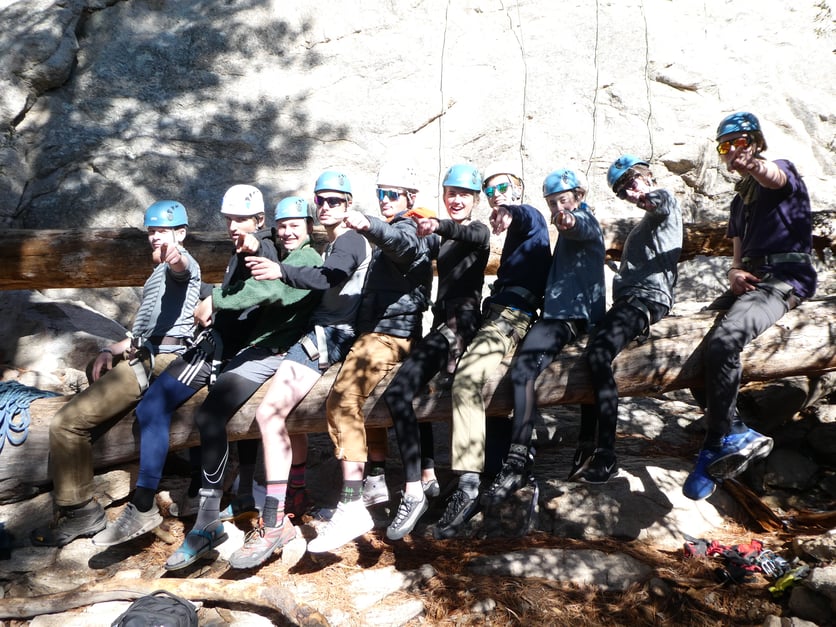 The next day was another epic day of climbing. Alex got hit by the infamous Mountain Plague and was down for the count. Kate climbed with us and made very hard climbs look effortless with all her dynos and mastery of knowing how to use ‘dinner-plates’ much better then the rest of us. It was fun to watch. At the end of the day of climbing we said not goodbye but see you later to Aaron and got into the bus. We were all exhausted and my forearms were on fire. Kate and Alex got on the bus with smiles on their faces and that made me realize that something good was about to happen due to the fact that Alex was very sick. They told us that we were doing awesome and we had moved into the next phase in our trip which is a huge milestone for our group, we were now in Main Phase. We erupted in the bus and celebrated with some T-swizzle as well as Mumford and Sons. One of the rewards of getting on Main Phase is that we get to go out to dinner. We packed up our camp and headed down Mt. Lemmon to get some delicious Mexican food. We ate and ate and ate and once we were full we kept on eating. It was SO good. It was the storybook ending to a trip that was riddled with changes of plans and sickness but we all agreed it was awesome. It’s funny how life hits us that way. 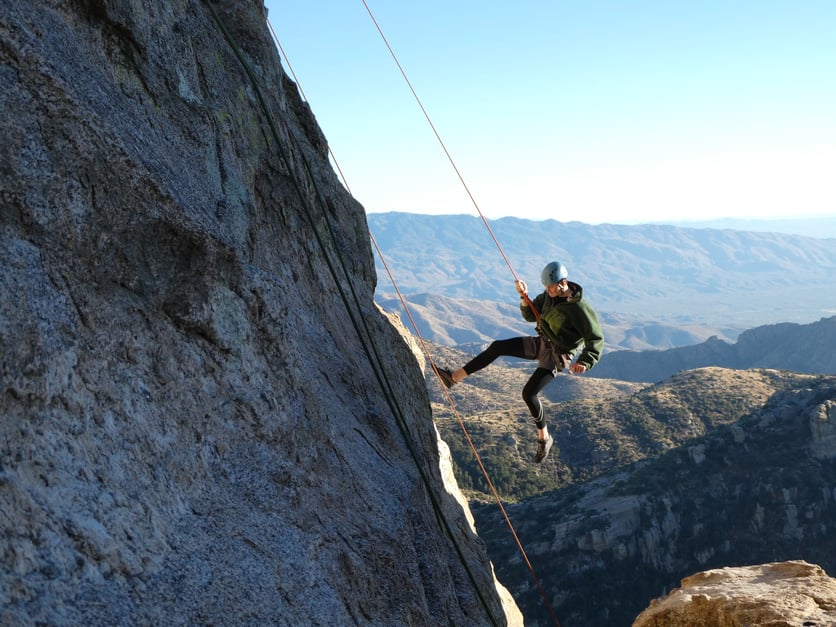