Mountain Classroom is cruising east! In Colorado we focused their studies on Allan Savory's Holistic Resource Management while discussing the grazing practices at Chico Basin Ranch. Driving north we spent time with JR White Hat, longtime Proctor friend, on the Rosebud Indian Reservation. We then drove through Kansas to learn about the Land Institute's pursuit to develop perennial wheat varieties. Now the students are perfecting their techniques for setting up tarps in preparation for solos in the hills near Green Sulphur Springs, West Virginia. 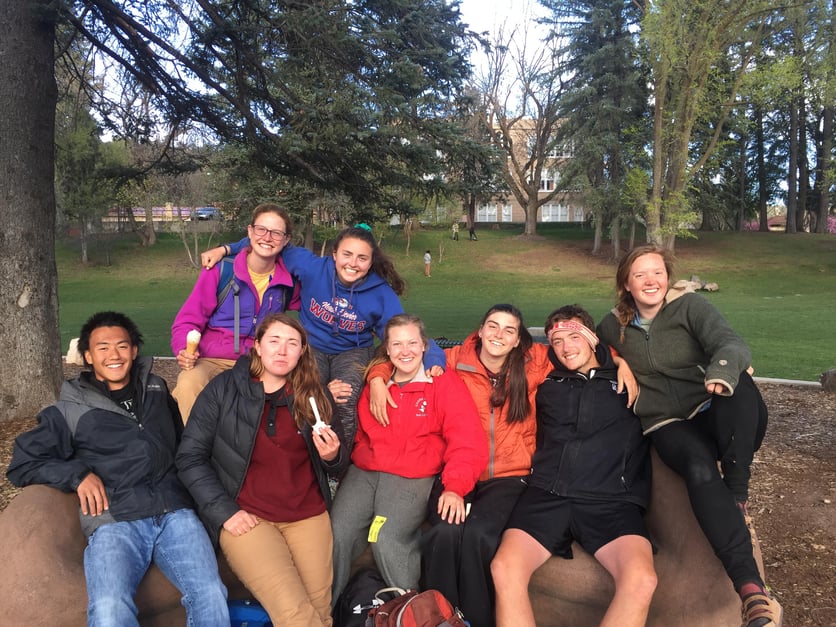 We drove into the flat grasslands of South Dakota to visit Rosebud Indian Reservation, a place that has been connected to Proctor for longer than I have been alive. I have heard so much about Rosebud from the faculty who have visited and those who have taken part in one of the sweat lodge ceremonies back on campus. I knew JR White Hat from when he spoke at graduation two years ago and now we would be staying with his family.

JR had an old chicken coop, that looked more like a shed, that he did not want anymore. While we were in town he put us to work taking apart the old, wooden structure. We hopped on the roof with alacrity and began pulling out nails and removing the long planks serving as walls. We moved with purpose and enjoyed working together. Once we stripped the structure down to its frame we began to push. We wiggled it back and forth and the supports began to break leaving the nearly flat roof and miscellaneous pieces of wood lying on the ground. It did not take us long to shuttle all of the wood to JR’s burn pile. We then looked down at the spot where the chicken coop once stood gratified by the work we, as a group, had done. It would have taken JR two weeks to complete the work, and it took us just a day. 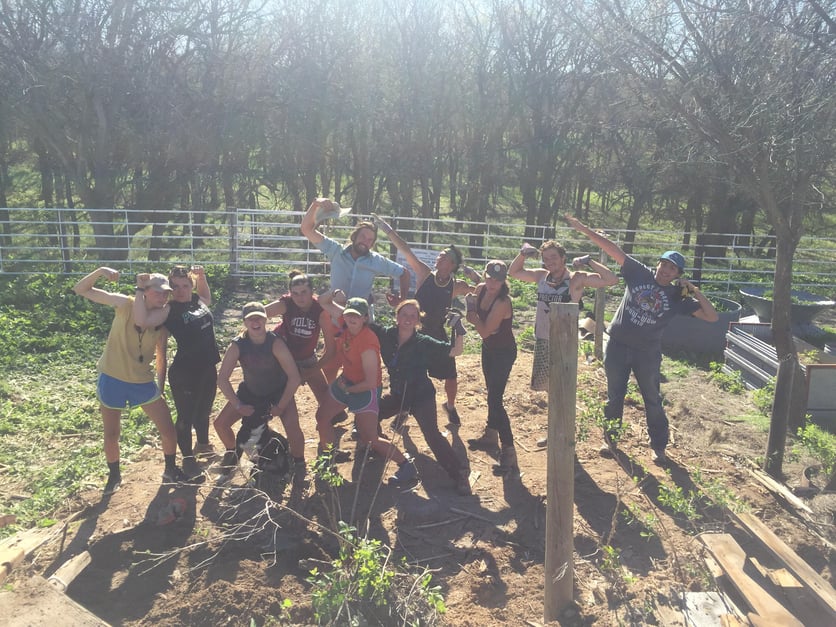 As the darkness came we prepared for our sweat lodge ceremony. We made a large fire with 32 rocks at the center and heated them until they turned red. We filed into the sweat lodge, a small dome-like structure, and said Mitakuye Oyas’in, which means “we are all related.” We sat in a circle as the hot rocks came in. When the flap closed it became so dark that I could not see my fingers just inches in front of my face. I closed my eyes and opened them again amazed by the similarity in the darkness. The singing began and water was periodically added to the fire causing the temperature to rise. Sweat seeped out of my body making me surprisingly calm and at peace. When we emerged again to the cool night air, I felt cleansed and so alive. The sweat lodge can affect each person who enters differently. For me, it was rejuvenating.

Do you know why ranchers are going to stop baling hay into round bales? Because the cows can't get a square meal! Just kidding.

This week we've discovered the potential of grass to change the world through visits to Chico Basin Ranch in Colorado and The Land Institute in Kansas. When we first arrived at Chico Basin Ranch we visited a bird banding station, where they are collecting data from the birds that migrate through the area. Grasslands have been fragmented by suburban sprawl and farming, which presents a challenge for the birds that depend on this habitat. Chico Basin grazing practices are allowing the short grass prairie to thrive, creating an ecological corridor, or flyway, for the migrating birds. Never before have I seen a songbird so up close and personal. Never before have I realized that their songs are really just one piece of their beauty. Never before have I narrowly missed being struck in the head by a just released bird.

These are the joys of experiential learning. This encounter made all of us think that we were prepared to devote our lives to bird banding, which conflicted with our previous realizations that we're meant to be climbing guides, park rangers, hermits, and gym teachers. That's why we all loved meeting Becca, a thirty-something intern who came to Chico Basin after her TV show in L.A. was cancelled. She was drawn to the ranch when she saw pictures of their horses on social media. This genuine encounter was a welcome reminder that if you have the passion and the work ethic, you can do it all. 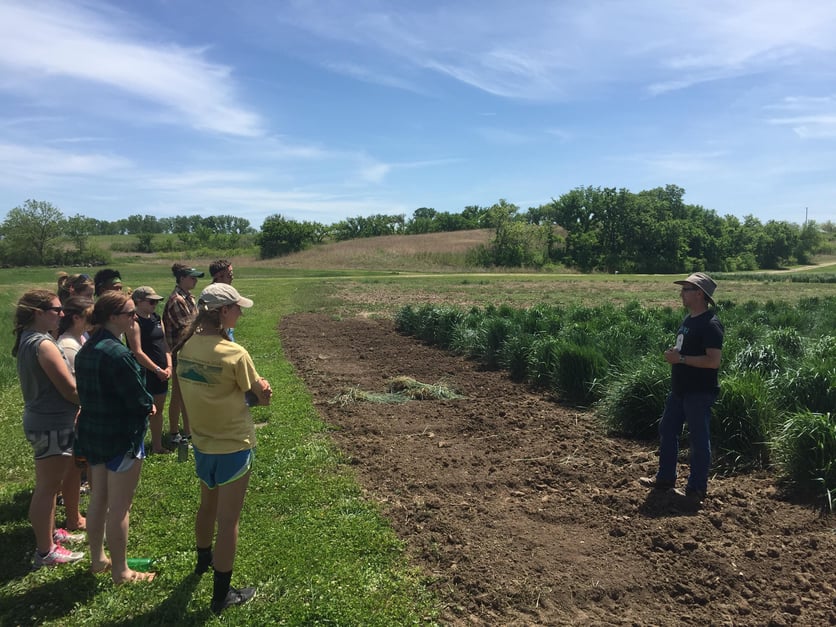 After leaving Colorado, and visiting Rosebud Indian Reservation, we arrived at The Land Institute in Salina, Kansas. Here, we realized that in addition to all the aforementioned, we wanted to be agriculture research interns as well. At The Land Institute they are developing perennial versions of wheat, sorghum, and an oil seed. This has the potential to solve soil degradation, and therefore the potential to save the world. 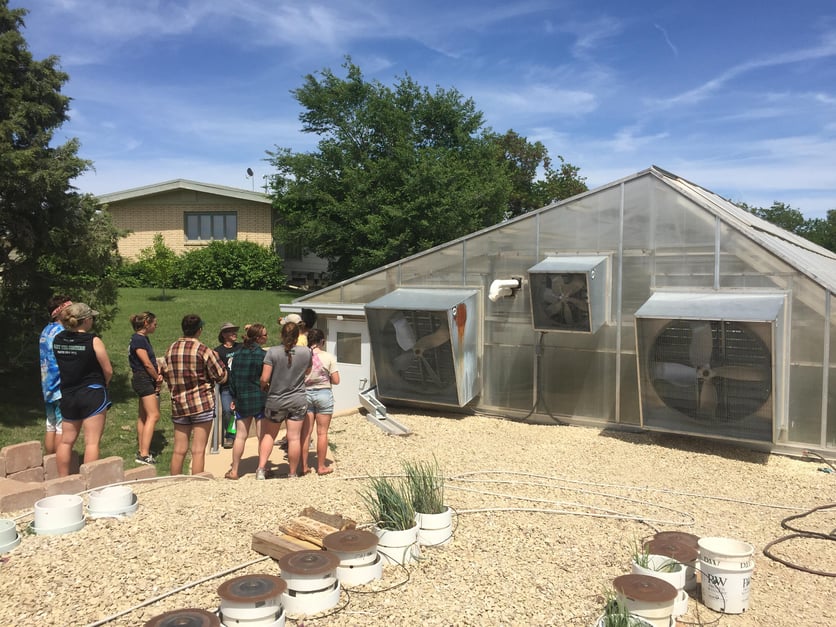 To top it all off, we met Wes Jackson, the founder and president of The Land Institute. Speaking to him for a few moments in a hallway is something I'm going to remember years from now, when his agricultural activism takes root to change the way we grow food. I will also remember the interaction because his overalls inspired the farmer in all of us. So, as soon as we get back we're starting a farm, in addition to all our other inspired pursuits.