Over the past week, Proctor Academy's Mountain Classroom program traveled  the mighty Mississippi River in 30 foot canoes. Sound like an amazing experience? Read student reflections and see stunning photography of the trip in this week's update from Mountain! The remarkable photos in this blog were taken and shared with us by John Ruskey, Quapaw Canoe Company Outfitter!

Today was the end of our adventure on the Mississippi River. I now sit outside a Laundromat waiting for my clothes, dirtied from days camping on small islands in the Great River. It’s not an experience I will soon forget. Our guides were two wonderful characters that seem out of a work of fiction. River, the aptly named African-American man from Saint-Louis with a calm intelligence and an infectious good mood, was with us the whole trip sharing factoids about the wild life, people, and culture of the area. John, our other guide who had to depart a day or so before the end of the trip, is what one might picture when the phrase “river guru” is used. His longish smoky beard frames his weathered face and he has a love for sharing songs and stories about the river and the people who have lived on it. 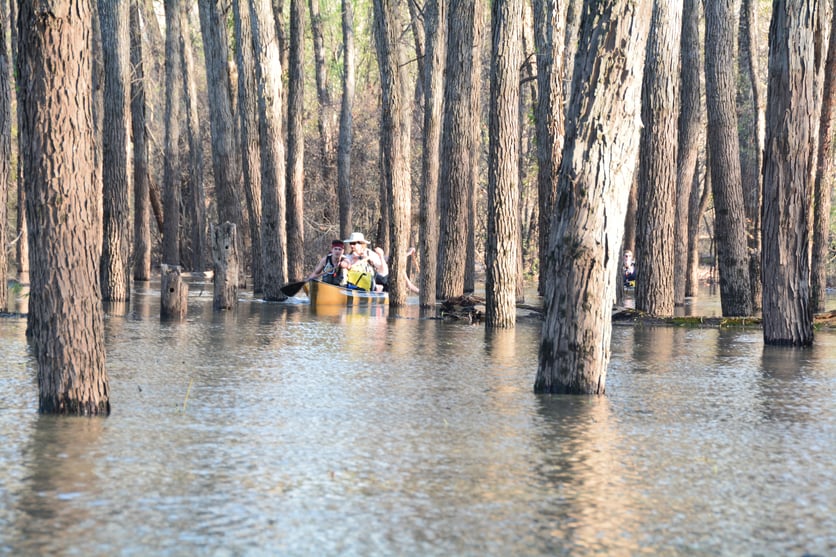 Our boats had as much character as our guides. The largest canoe, Grasshopper, was a heavily varnished wooden vessel with dark redwood highlights marking the water line and creating a decorative eye inside the boat. The boat’s gentle curves and perfectly straight keel made it a smooth ride. It was also the fastest of the canoes most days, which was surprising considering that it was carrying the largest load and the other boats were sporty fiber-glass Kevlar numbers. All of them moved faster as the days progressed and the food and water was removed from the stores. 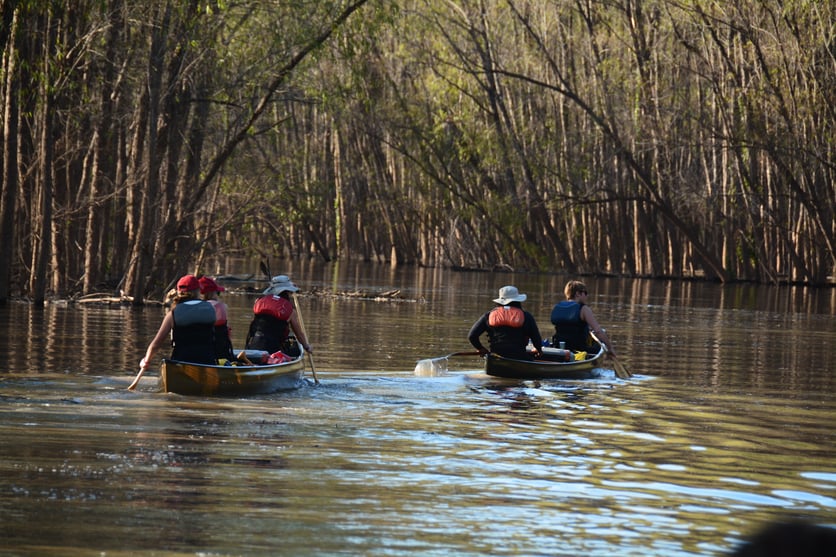 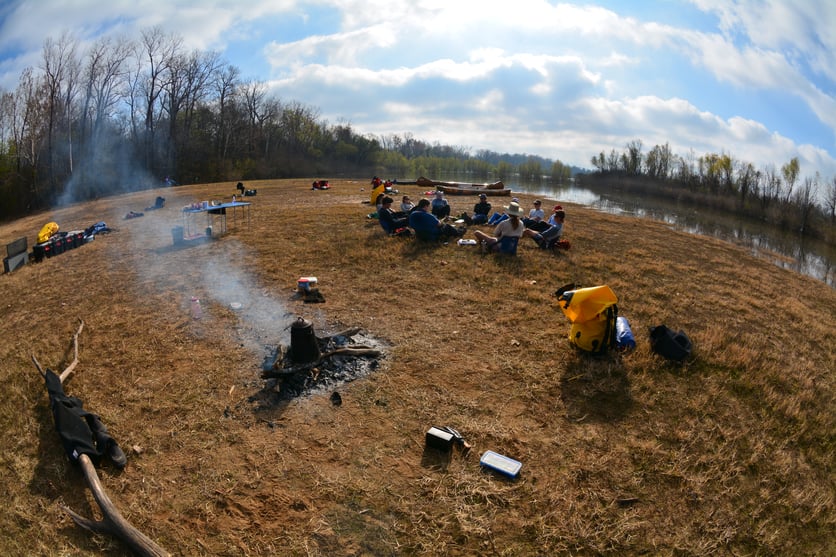 One night when we had just settled down for camp John began a story and asked us if we had heard it somewhere before in American literature. The story was about the Sioux and the beginnings of various tribes in the west related to them. It told of how many left their homes in search of new lands to settle in and make their own. One brave group loaded up numerous dugout canoes and set out downriver into the Mississippi watershed hoping to take the Ohio River to the north to find fertile lands. There were several groups in this flotilla and they all stayed, generally, in the same area as each other. But, as they reached the mouth of the Ohio the last group was separated from the rest by a storm whose wind and rain slammed down with the force of many spirits. They were pushed away from their goal of the Ohio and ended up getting separated and lost. The last group gathered itself downstream and reached the rich dark soils of the Mississippi Delta which teamed with edible plants, wild game and fish. They happily settled there and became the Quapaw, the down river people. John wonders if Mark Twain didn’t get a little inspiration for his classic Huckleberry Fin from this old tale and I can’t help but wonder if we, ourselves, have re-lived it in a slight way when we chose to take the chance on going up the White River instead of staying on the Mississippi like planned. 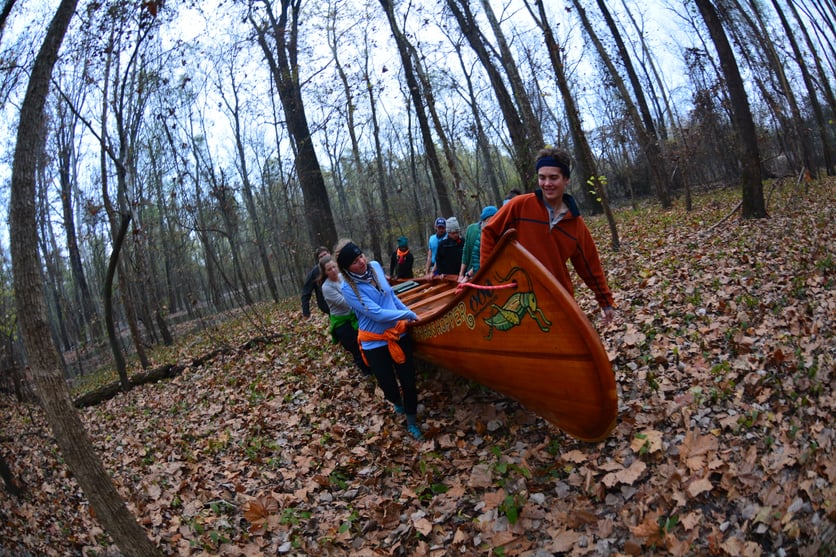 The portage we took from the White River to the Arkansas River has not been used since quite possibly the time of the Quapaw themselves. As we and our guides were the first to make that portage in modern history, and since there is no name for it yet, it’ll now hold the name of the Proctor Portage. It’s funny how this all comes together: the story of a Native American tribe, a Mark Twain novel and the Proctor portage.

Around 400 years ago the Quapaw Tribe paddled up the White river, a magical swirly body of water with thick jungle like islands where armadillos roamed. The Quapaw carried their wooden canoes from the White River to the Arkansas River. Our rugged group caked in mud followed in their footsteps one dark night last week. One by one we unloaded our gear and climbed the levee with our tired bodies. After three hours we had collected our supplies in our new camp. We then sat on shore of the great Arkansas River and ate our delicious spaghetti and gourmet red sauce. Around a fire we laughed and cheered at our accomplishment surrounded by tall grass and smiling faces. 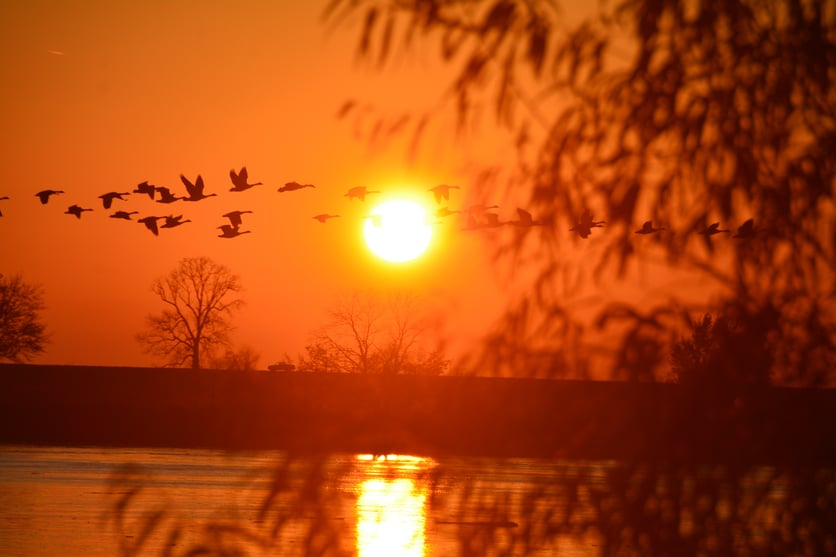 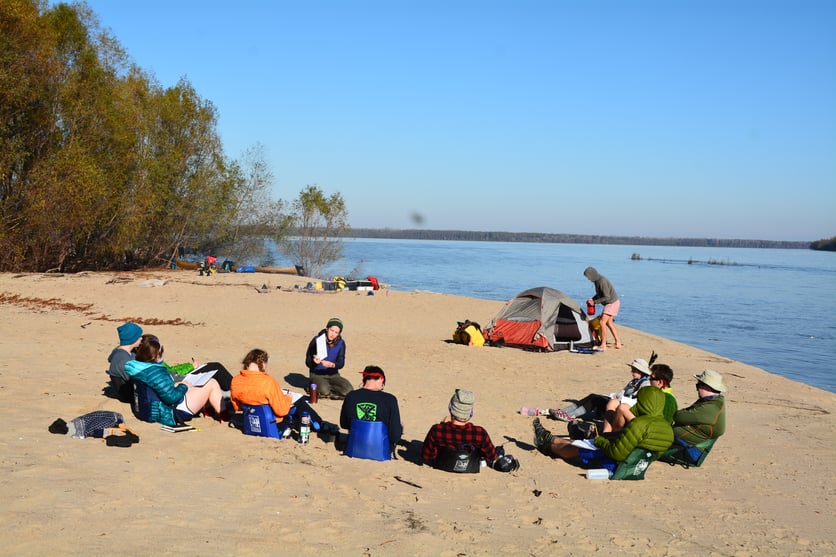 We awoke the next morning to play a game of ultimate frisbee followed by delicious feta cheesy eggs on bagels. Our amazing guides then showed us the plan for the day, which consisted of paddling far to Cat Island. This mysterious island looked like a scene out of the western prairie. I almost expected to see giant buffalo in our own campsite. Instead I comfortably slept out under the stars in what was probably a boar's freshly dug hole. The stars aligned as my mind was taken to another dimension of dreams about being a part of the wonderful Quapaw tradition of paddling down the Mississippi in a 30-foot canoe. Our canoe we know as Grasshopper. After reflecting on our long days of paddling we are proud to be a part of history.