Off the Field Onto the Stage

As a Proctor student I have done a number of things in the community, some of which involved stepping out of my comfort zone. I have gone to Guatemala on a Summer Service trip, played varsity football, helped the varsity basketball win a championship in England, and spent a term abroad in Segovia, Spain. Traveling has always been easy for me, so they weren't necessarily risks, but going out on Wilderness Orientation was a huge step out of my comfort zone. As was running for school leader and putting myself out there last spring. However, I never thought I would participate in the musical. I have always attended previous productions, but never thought that I would one day be up on stage. That all changed this spring. 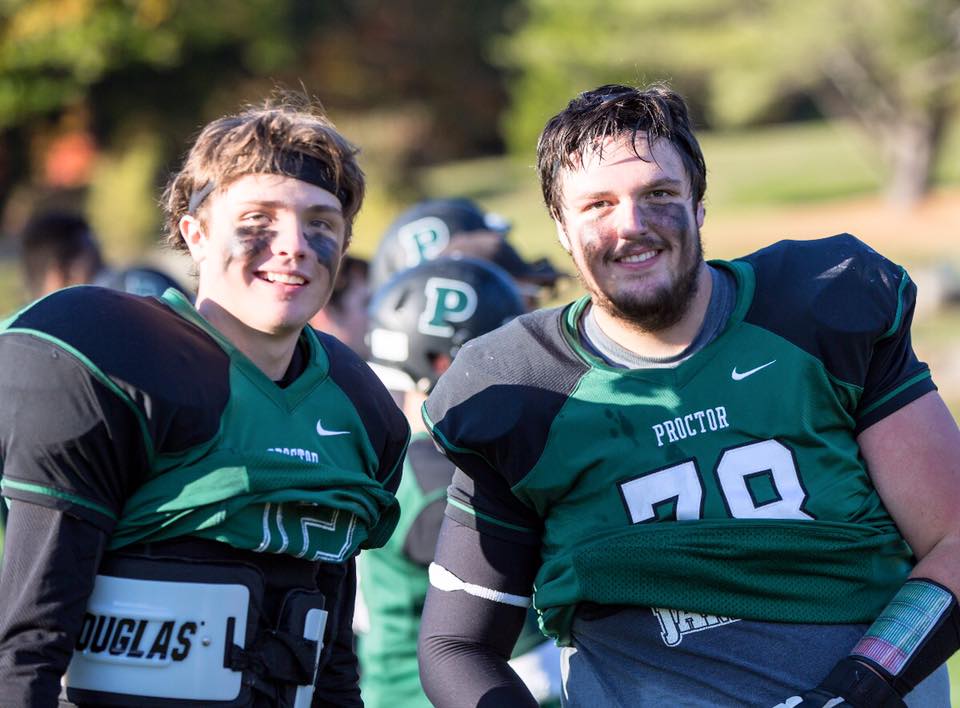 As I entered my final term as a Proctor student, I decided I wanted to end my career here on a high note, no pun intended. My mom had encouraged me to try theater in the past, and I always blew her off and said why would I do that. I have always identified myself as an athlete. Sure, I sing along to the radio and maybe in the shower a little, but I have never sung in front of a group of people (at least not more than the six people that fit in the car).

The first risk was signing up for an audition. I just wanted to get it over with and was prepared to go during exam week this winter. However, the success of our basketball team (making it to the NEPSAC semi-finals) got in the way of my scheduled slot so I had to wait a whole month before trying out. When that day came I was ready. I went into it thinking that I would be a tree in the back or a townsperson. I guess they really liked what they heard, because instead of being that person standing in the background, I was one of the main roles. 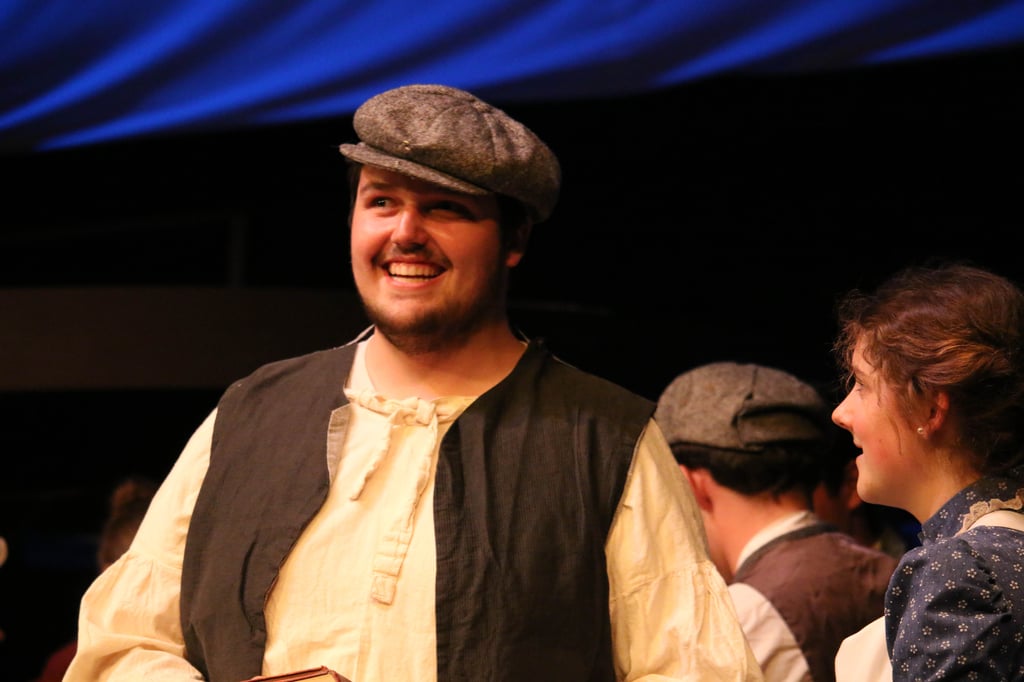 I got cast as Maurice, Belle’s father. As I found out my new role, my mind was all over the place. I was thinking, "How am I going to do this? Am I going to have any solos?" I was also having thoughts of excitement and adventure. This is a big leap for me and part of me was really nervous, but also excited. I was ready to embark on a new adventure into something that I never in a million years would have seen myself doing.

Step one was memorization. Memorization is not too hard for me, but my experience with memorization is more like memorizing the quadratic formula or the definition of a word. Whereas in the theatre it is more about memorizing a conversation with emotions and actions, as well as music. I didn’t understand how much work you needed to put into fully memorizing something. I have to look through my lines a few times a day to keep them sharp in my mind. Now that I’ve got them down, the challenge is blocking and remembering where I have to be and what I need to be doing.

In addition to my regular lines, there are songs to memorize. I have two where I am either the main singer or one of the main singers. There are also about ten other songs that I have to learn so I can sing them offstage. As a member of the audience I never realized how much work goes into these productions. My involvement has really changed my view of what is happening. As an athlete it is easy to see the progress of a team because teams practice out in the open and you can see them. This is not the case for the actors, they practice in the theatre, black box, and chapel, which are all isolated from the rest of campus.

The next leap is getting over the “stage fright”. It is an experience in itself by just stepping onto that stage with all of the bright lights and 400 people closely watching you. While you are trying to take it all in you still have to pay attention because you might miss a cue or say the wrong line. 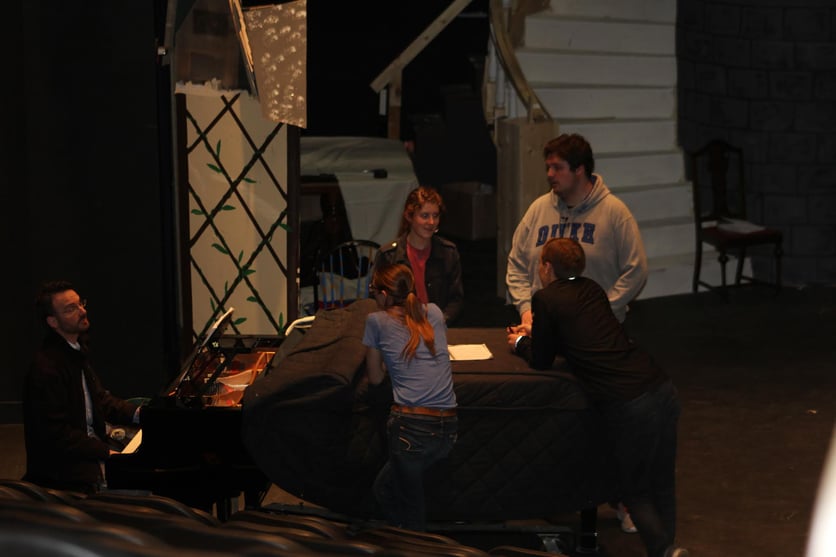 Throughout my time at Proctor I have heard don’t be just an athlete, be a member of the community. In a sense I have been a member of the community, but all of the things that I have done have come easy to me and they aren’t necessarily stepping out of my comfort zone. I love to travel and interact with people, so all of my trips, although they might be way out of some people’s zones, they were right in mine. Performing in the musical will knock all of those things out of the park.

This is what it truly means to be a member of the community. It is about doing something that is new to you, but it also helps you meet a completely different group of people and you make new friends that you might not have made otherwise. Being a member of the community also means knowing the people in that community and knowing what they like to do and experiencing everything that is offered so you can help other people. 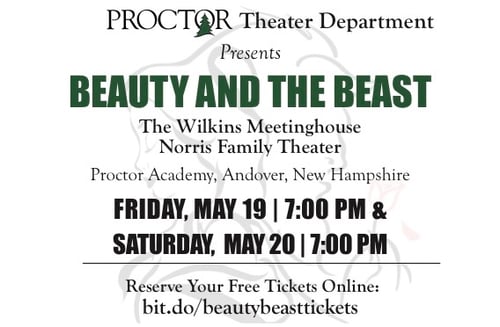 As the date gets closer and closer, it is really cool to see the musical come together every day. I encourage everyone to come out and support all of the actors in one of their only two performances of the term on May 19 and 20. I, personally, know that everyone has been working very hard, and who knows, maybe it will inspire you to step out of your comfort zone a bit more in the future!