My absolute favorite part of Proctor en Segovia is our afternoon activities. When I learned how many options there were, I was thrilled! I’ve been taking classical Spanish guitar lessons with a man named Oscar. Using a combination of Spanish and English we have been able to communicate flawlessly. Our most recent lesson was a blast. We used a program on his iPad to set up a drum beat, record a chord progression on his bass, and then switch between playing the chords and playing a solo on the guitar. I don’t even think of my “lessons” as lessons anymore, I feel like I’m just going to go jam out with a friend and learn guitar along the way. 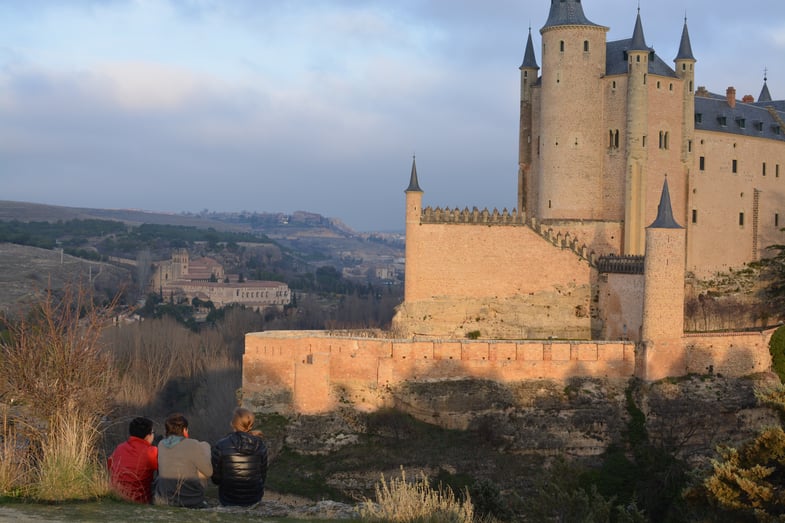 Any hike to the caves is not complete without a stop to admire the Alcázar (Segovia's castle)!

My fingers brush across the strings;
Our music fills the room.
My smile widens 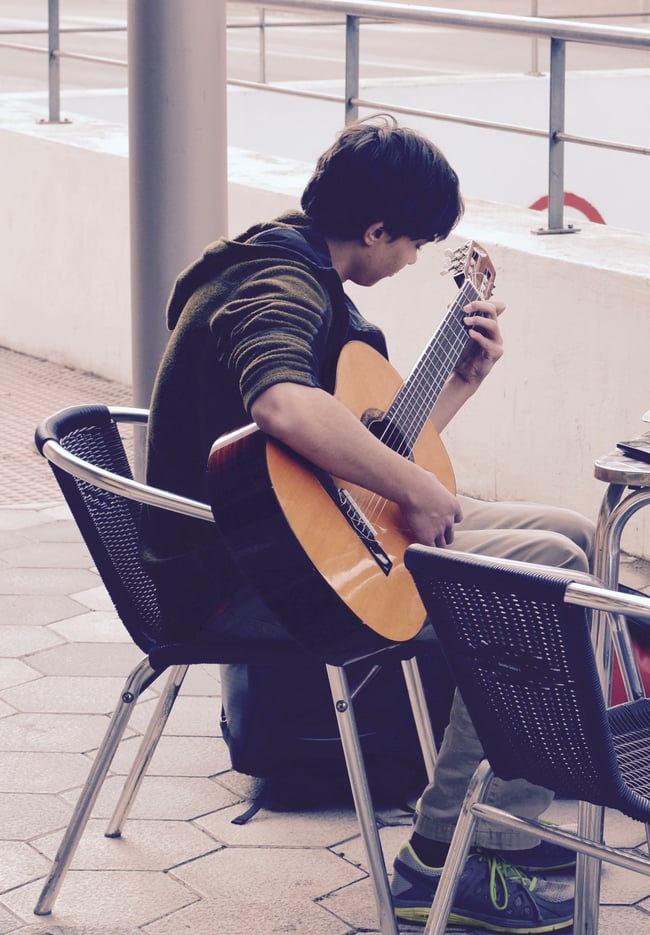 Two weeks ago after my lesson, I went to buy a new string for Proctor’s broken guitar. After waiting for the music store to open, I saw the owner pull up on his motorcycle in a leather jacket. Right away I could tell this guy was interesting. After my purchase I inquired what instrument he plays. He proceded to tell me he plays an instrument called the “dulzaina.” It’s a double reed flute-like instrument in the oboe family and native to Spain. At the time I didn’t know what it was, so he took it out to show me. He told me to wait and booted up his ancient computer. He pulled out these massive speakers and proceded to blast a dulzaina recording of The Beatles “Yesterday.” He continued to play this interested teenager dulzaina recordings while customers continued about their business in a nonchalant manner. I love the Spanish culture.

Former Proctor en Segovia host mother, Marga, was thrilled to have the chance to work with Proctor students for an afternoon! Along with members of the parroquia, students cleaned the church in preparation for the Festival of Santa Águeda.

There is a Spanish festival, “La fiesta de Santa Águeda,” celebrating the martyr Santa Águeda. In times of Christian persecution (in the Roman Empire), she rejected the advances of a regional governor in Italy because she offered her virginity to Jesus only. Angered, he sent her to a brothel and miraculously her virginity remained intact. Enraged by this, she was sent to have her breasts cut off, tortured, and later killed. She is now a symbol of fire protection, difficult births, breast feeding problems and the saint of breast cancer patients. After my guitar lesson I helped clean up the church “La iglesia de Santo Tomás” in preparation for the festival. Almost all of the people helping clean the church were old Spanish women. They were surprised to see our young group there to help them. We watched them make a “Pelele.” The Pelele is a fake man that is held to the cross and burned for tradition. It is also tradition for women to dance around it, kick it and sing on the festival day. 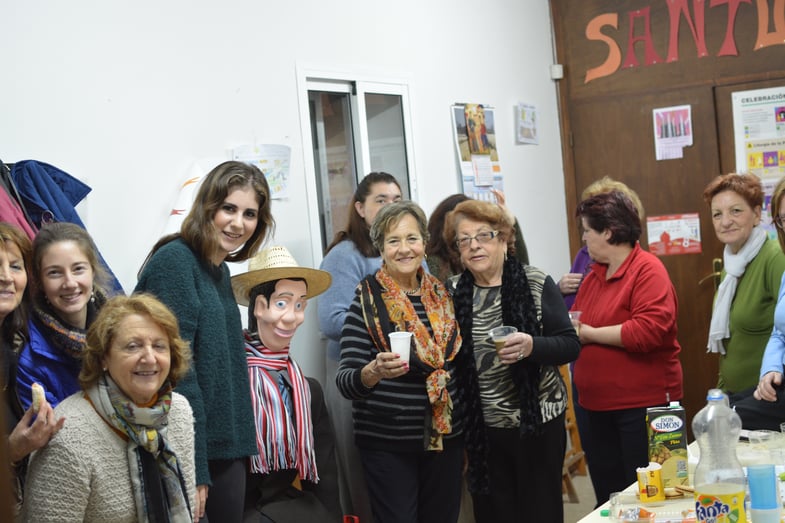 Volunteers with the "Pelele," enjoying a snack after their hard work.

The cleaning team of the Iglesia de Santo Tómas. 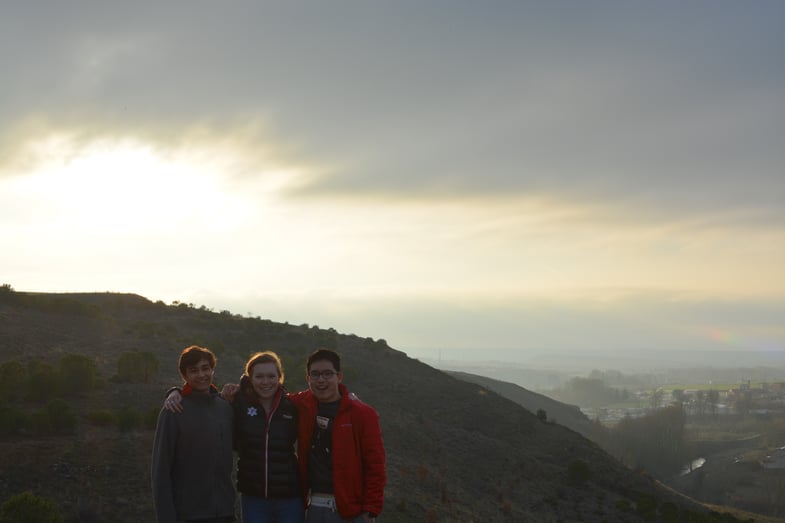 Miles, Kali and Nick hiked to caves in Tejadilla valley, just outside of Segovia's old quarter. 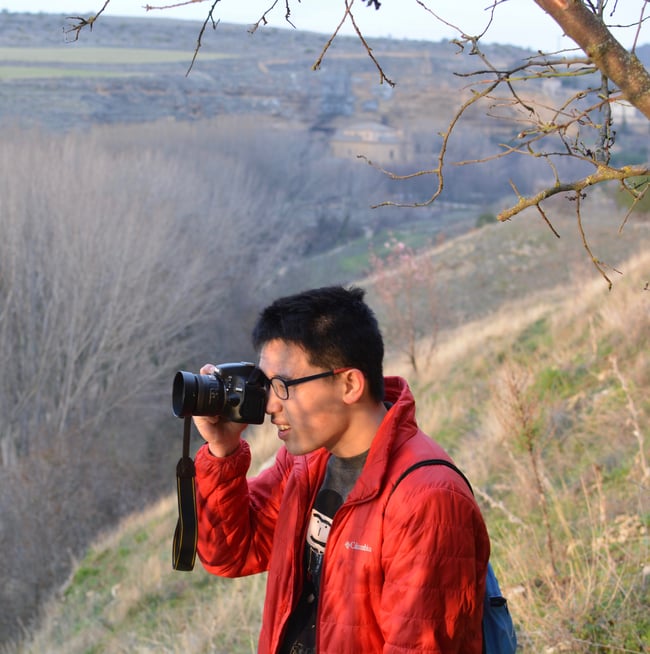 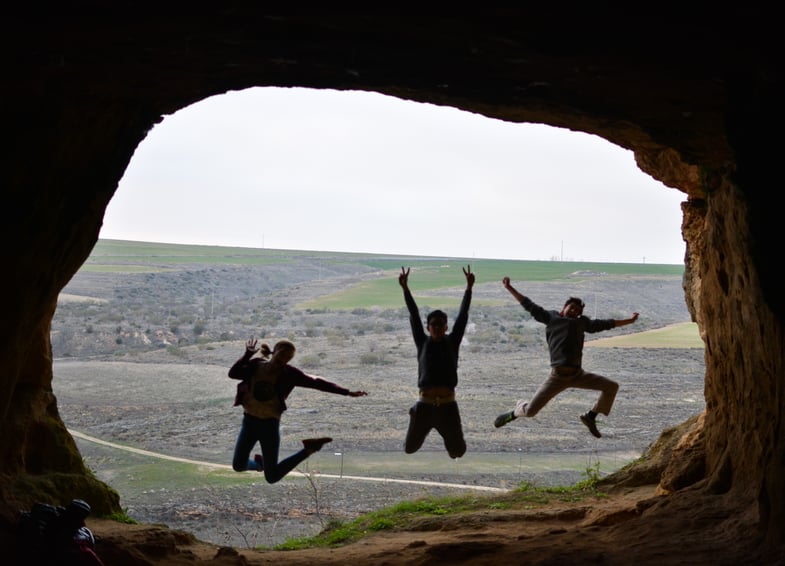 This past weekend we traveled to Madrid to visit another art museum and to see a Real Madrid fútbol game. The game we saw was Real Madrid vs. Espanyol, one of Barcelona’s other fútbol teams. I’ve personally never watched a Spanish or European futbol game on TV, or even played FIFA, so this was a new experience. I know a lot of Proctor people love European fútbol, and we happened to have two among us. Jay and Zack had the biggest smiles throughout the game. Everyone got scarves to wear at the game, to show their spirit and to blend in. We sat in groups of two to watch the game. The crowds of people were full of excitement singing “Hala Madrid” or “Madrid” over and over again to the music of the loudspeaker. We got to see the teams warm up and witness the excitement when Madrid entered the field all dressed in white.

The game started off with quick control of the ball by Madrid in Espanyol’s half of the field; there was some back and forth, but Madrid seemed to have control. In the first 7 minutes Madrid’s Benzema scored their first goal. The crowd jumped up with the goal and the word “GOOOL” was cheered and sung while the fans exchanged hugs, showing their pride. The game picked up, and, 11 minutes in, there was a foul called and Madrid was given a PK kick taken by Ronaldo. The crowd went quiet. When the kick sunk into the goal, the crowd roared with excitement and the word “GOOOL” rang again throughout the stadium. The game continued with everyone on edge of their seats wondering, Will they score again? Who will score? Will they keep control of the game? 5 minutes after the second goal, #10 James scored the third goal; at that moment we all knew who was going to win, but we were not sure what the final score would be.

The game kept going with dramatic intensity that had us wondering who would score and watching to see who had control of the ball and where it was on the field. In the lastminute of the first half, the fourth goal was scored by Ronaldo, and he celebrated.

The second half was pretty slow compared to the first, with both teams controlling the ball. Eventually, 37 minutes into the half, Ronaldo scored the fifth goal for Madrid and his third of the night to complete a hat trick. The hat trick caused the crowd to roar and the announcer said “hat trick” with a Spanish accent. Soon after, around the 41-minute mark the sixth and final goal of the game was scored by #20 Jesé, and the crowd was still enthusiastic with “GOOOL” echoing through the stadium for the final time. After the Real Madrid win, all of us were filled with the pride as Madrid is one of the teams that many Segovians support. The Real Madrid Game so far has been one of the highlights of our excursions. Throughout the last couple of years, I have developed a complete love for the game of soccer. While I have dabbled with watching a little soccer back home, I have never seen anything quite like the fanfare of Real Madrid. The experience, for me, began before stepping out of the subway. I was immediately met with a cool, artificial breeze and more people than I could possibly count. This mob then climbed what seemed like an infinite staircase of escalators, driven only by the growing mass ahead. Suddenly a breath of fresh air and the inexplicable separation of the masses. Some break for the Santiago Bernabéu, a block of human achievement. Others break apart going some place only they know. Then we file through the doors headed toward the crisp, green center to watch 11 men captivate millions. The game seemed a cerebral blur. The stride of the players akin to the beauty and grace of the natural world. Suddenly a goal to break the glass slowly forming around the silenced spectators. A moment captured in a single mental image forever. 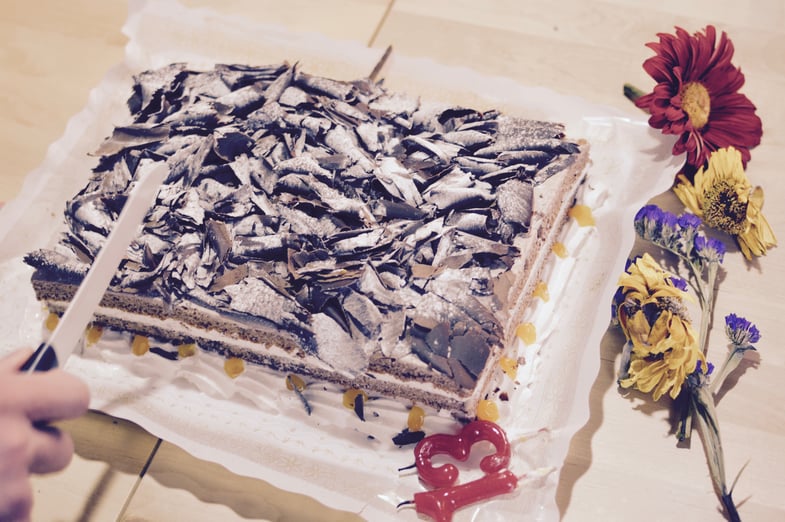 I am not a museum guy at all. Actually, I frowned when I heard the word “museum,” because I am nowhere close to being artistic and clearly lack the appreciation of pure aesthetics. Brush strokes are meaningless lines to me. A green tree is a green tree instead of a reflection of liveliness and happiness. So, when I heard that we are going on a trip to Museo del Prado, I was not excited.

Strolling down the Paseo del Prado on a beautiful Sunday morning in Madrid.

Yet I was completely captivated by Museo del Prado at first sight. The building itself seems quite ordinary, with a sense of desolation. The inside, on the other hand, is delicate and solemn. Ryan, our history teacher who is known for his “30 second history lessons,” showed us around the museum. It is known for housing large parts of the collection of three significant artists: El Greco, Diego Velázquez, and Francisco de Goya (in chronological order). One can easily distinguish the painters: the great contrast of dark and bright as a result of Greco’s penchant for the holy light, Velazquez’s emphasis on a more realistic appeal, and Francisco’s transitions between different styles, according to his life experience.

From all the paintings I saw, I especially like Velazquez’s masterpiece, “Las Meninas.” It is considered his masterpiece for various reasons. The use of light and shadow to portray depth was groundbreaking, the painter himself, exceptionally, painted himself into a royal painting, and the ingenious reflection of King Philip IV and Mariana of Austria in the mirror allows multiple interpretations. In the front, Princess (Infanta) Margarita is happily watching her parents getting painted, accompanied by her ladies in waiting. Although I cannot really tell how delicate and extraordinary the painting is because of the artist’s technique, I love the painting because of the very perspective it presents: the majesty of the royal family, the relationship between servants and nobles, and a semi-formal reflection of the history.