Proctor en Segovia: A Walk Into a Postcard

I want to talk about about the appearance of the place: all the white buildings, the Mediterranean sea and the white sand beaches, even the red jellyfish that stung Michael. Out of all my time in Spain, Cabo de Gata is the most surreal place I have visited. I've seen pictures of settings like this online and on postcards, but I never actually thought that I would be here. Looking at the scenery in front of me was hardly a dream, yet I couldn't shake the feeling that I was in paradise. Proctor en Segovia Fall 2017 poses in front of the Alhambra palace complex, the last stronghold of Islamic Spain, or al-Andalus. Exploring the twisting, turning streets of Granda’s Albaicín neighborhood, the center of Moorish Granada before 1492.

When we first arrived I saw that mountains surrounded us. They were barely visible in the darkness, just shadows in the background, illuminated by the moon. What really caught my eye was the white building right in front of us, the house that we would be staying in for the next three days. We ran inside to explore and the adults stayed behind to unpack. I looked in all the rooms, including all the bedrooms, and also discovered a pool in the back and a cactus in what was the girls room that we never got around to naming. The rest of the night was filled with laughter, fun and pizza until the next morning when we set out for the beach.

Michael presents on flamenco music and dance in Granada’s Sacromonte neighborhood, one of the birthplaces of the art form. 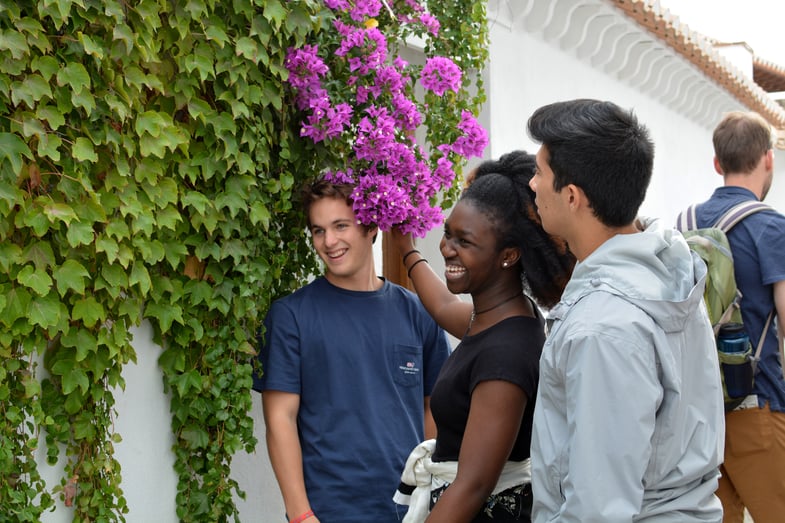 A neighborhood dog has a drink of water after listening in on some student presentations!

The view from our house was amazing and the drive to the beach near Agua Amarga even more so. We passed beautiful home after a beautiful home, crisp and white, in front of mountains with the far-off the blueness of the Mediterranean and sky providing a nice background. It was profoundly picturesque, but I resisted the urge to grab my phone and took in the scenery with my natural lenses instead. I did however give in to the urge at the beach and took many photos of the different shades of blue sky and ocean along with the two rocky mountains on either side, like guards, acting as some kind of barrier against the outer world. I don't know if I'll ever see anything like it again, but now I know that that place on the postcards is as real as you and me. 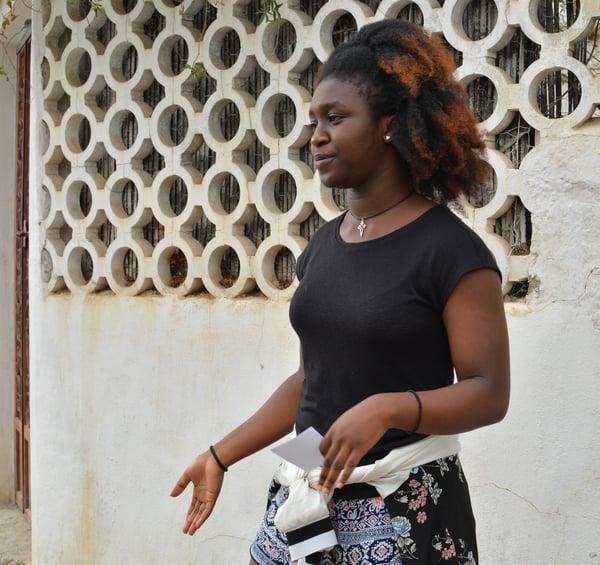 Zina presents on the history of the Roma people (commonly known as Gypsies) in Granada.

A flamenco dancer captured in bronze.

Discussing immigration issues in the courtyard of Granada’s 21st century mosque built on a hillside immediately opposite the Alhambra.

Hiking a mountain with a rolled ankle is not something that comes to mind right away as a way to heal one's ankle quickly. We opened the van door and were instantly smothered by the sea breeze as well as the unmistakable smell of the saltiness of the sea. At the beginning of the hike, my confidence was building up as the path was paved and was relatively flat. However, what little confidence I mustered was immediately crushed when I reached the top and saw how steep the descent was. The trail, or what little elements of a trail that were present, had large rocks that, when mixed with rocks and pebbles of other sizes, created a nightmare for someone recovering from an ankle injury. 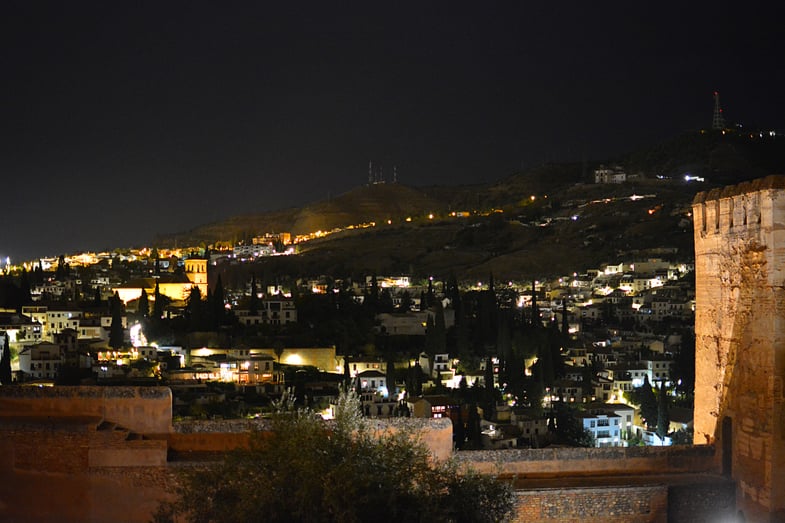 View of the Albaicín from the grounds of the Alhambra. Admiring the arabesque carved plaster and inlaid wood inside the Alhambra.

So off I went, inching my way down and using my arms as crutches. Being handicapped, however, didn’t interfere with my experience because it actually let me enjoy the scenery of the coastal mountains. From where I was I could see a secluded beach that was hidden by high cliff sides on either side. The sky was completely clear with not a single cloud in sight, the sky contrasting with the cliffs like a blue jay in the middle of winter. Visiting the Cathedral of Granada and the Capilla Real next door where the famous Reyes Católicos, Ferdinand and Isabella, lie in simple lead coffins in the crypt beneath their marble monuments. 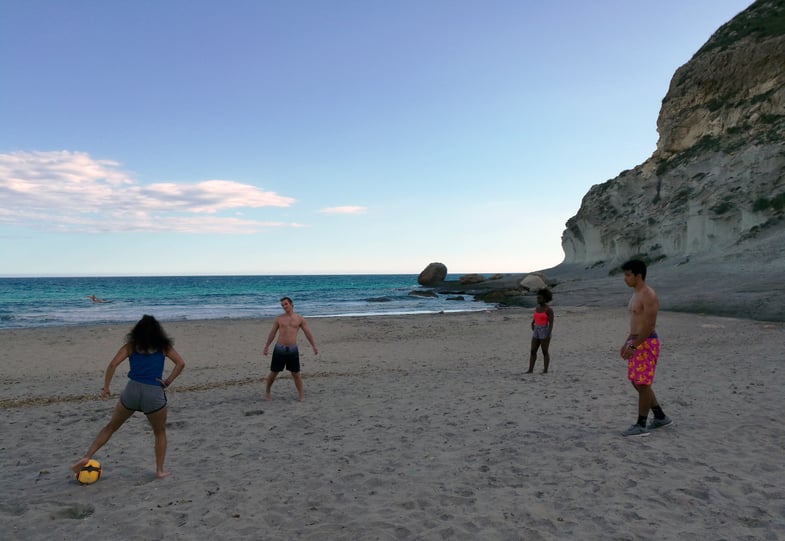 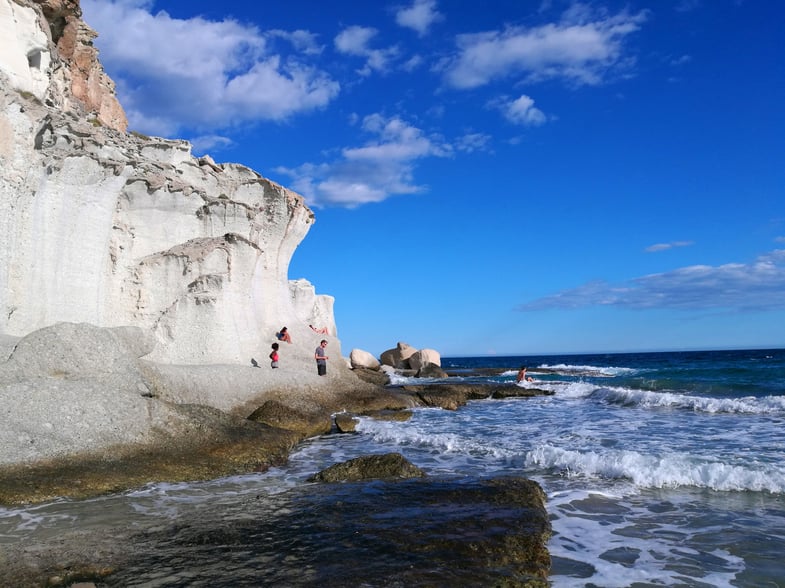 I can hear the waves crashing against the sandy beaches. My nose wrinkles at the salty air that once again gets into my nose. Reaching the bottom of the trail came with a welcome reward of a beautiful beach. Look for our final blog post of the term with end-of-term reflections at the end of this week. Hasta pronto!
~ Proctor en Segovia Fall 2017