Two weekends ago we attended a Real Madrid soccer game. I can easily say that it was one of the most fascinating events I have ever been to. The group had to meet at the bus station in Segovia at 10:15 am. It was one of our earliest Saturdays this term so far, but we all knew that waking up a little bit earlier than usual was all going to be worth it. 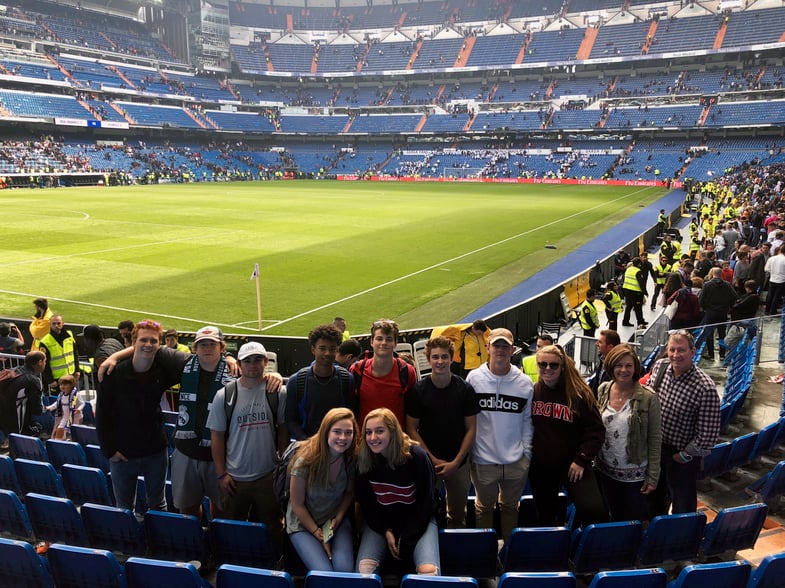 We started with the usual hour and five minute bus ride to Madrid and then took the metro from the bus station straight to the Santiago Bernabéu stadium. There we had a little bit of time to eat our bocadillos and look for Real Madrid jerseys, scarves, etc. After about twenty minutes we went into the stadium. I (Lila) was sitting with Avery, Campbell, and Ryan G. We were one section up from the field, and it was so cool to see all of the soccer players right in front of you. Sam C, Brewer, and Levi were a few rows in front of us, in a different section, and Chad, Ryan H and Sam W. were two rows in front of them. Will was sitting with his parents in the section above all of us. 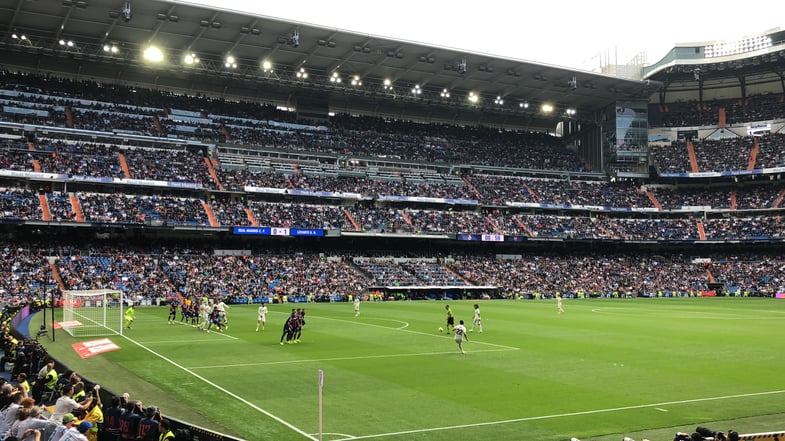 In the first half of the game we got to see Real Madrid shoot against Levante right in front of us. However, much to the disappointment of the fans, Real Madrid scored their only goal of the game in the second half and when they were shooting on the other side of the field. At this point in the season, Real Madrid was ranked 4th and Levante was ranked 11th. It was a good, competitive game, but Levante ended up beating Madrid 2-1. This is Real Madrid's first season without Ronaldo, and they are now definitely missing a key player. Although Ronaldo wasn’t there, there are [still] some incredible players on the team, and it was fun to watch them play. After many years of watching these soccer games on television back in America, we got to see a real game with our own eyes in their own stadium. 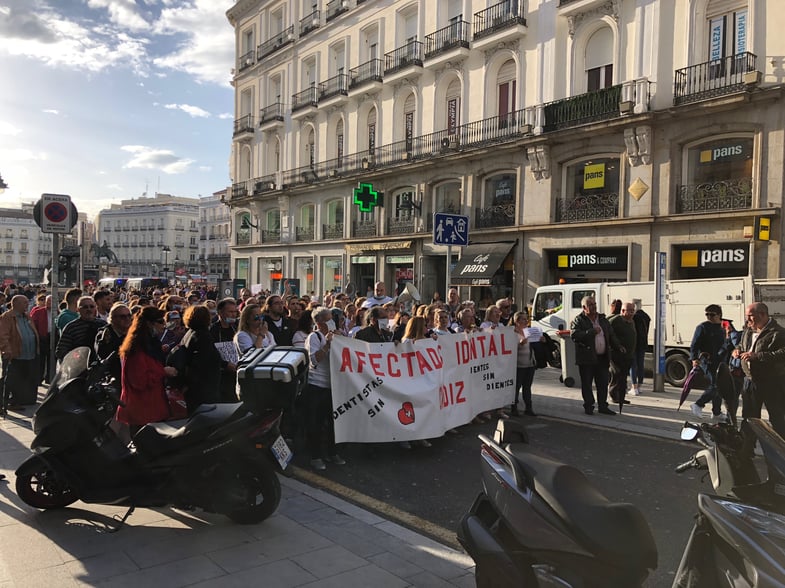 The Puerta del Sol is one of the primary plazas, meeting places, and the geographic center of Madrid and Spain (Km. 0). It is also the starting or ending point of weekly (or more frequent) peaceful protests and political demonstrations.

Before we went to the game, Ryan warned us all that the fans for Spain soccer teams are passionate and can get a little bit rowdy. That is definitely true. The team spirit that people have at Spanish fútbol games is incredible. Do you think that people are way too crazy at (American) football games? Try going to a Real Madrid soccer game. Some of the profanity they were saying in Spanish was a bit crude; I would think twice before bringing my children to these games with all the profanity! However, I think this is true with all professional sports. Everything inside the stadium looked fake. It is hard to describe in writing, but I think it is because we are all so used to seeing this action on television and not in real life. The thought of “the players are right there” kept circling my head. Despite a Madrid loss, the whole weekend was well worth it and the Real Madrid game was beyond amazing.

October 25th is feast day of San Frutos, the patron saint of Segovia.

Popular legend states that in the 7th century A.D. the patron saint of the city of Segovia, San Frutos (and his brother San Valentín and sister Santa Engracia), donated their family's wealth to the Church. 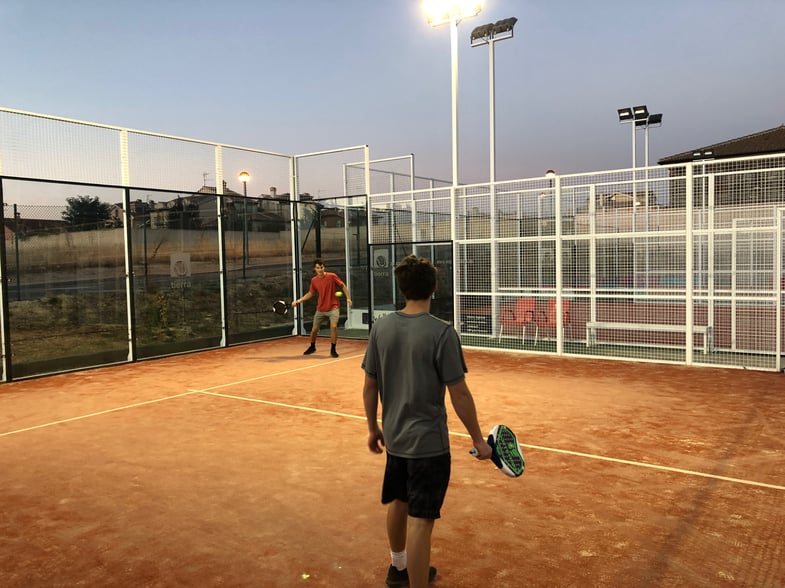 Students try their hand at a very popular sport in Spain, padel. For some it was their first time playing.

A suitcase lodged between us, “Sígue Bailando” playing and bumps of the cobblestone streets bouncing us up and down, I tried to understand what my host mom was saying in rapid fire Spanish. After a few times of her repeating the question, I realized she was asking how the flight to Madrid was and if I was tired. I answered to the best of my broken Spanish ability with, “Bien, pero no dormir mucho.” Though I was embarrassed with my lack of a decent answer, she was impressed. Since arriving in Segovia, this gave me my first smile and breath of relief. 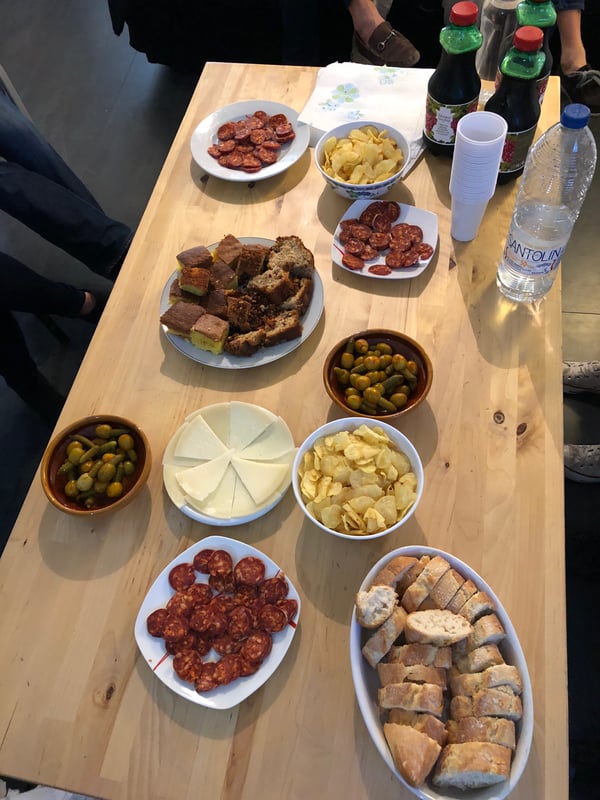 From the first day to now, being in the sixth week of living in Segovia, I’ve never felt uncomfortable in my house. It was almost like picking me up in New Jersey and putting me back down in a Spanish version of my own family. Angela always makes it clear that her home is my home. If I want food, I don’t need to ask, and if I ever need a hug to come to her. I had been pretty anxious about coming to live with this family, not just because it's a new family I needed to get used to, but because I wanted them to like me and invite me happily into their home. This may as well have not been a worry for me. Pablo, Angela, Victoria and Fran are all equally inclusive and caring about me being a part of their lives for two months. 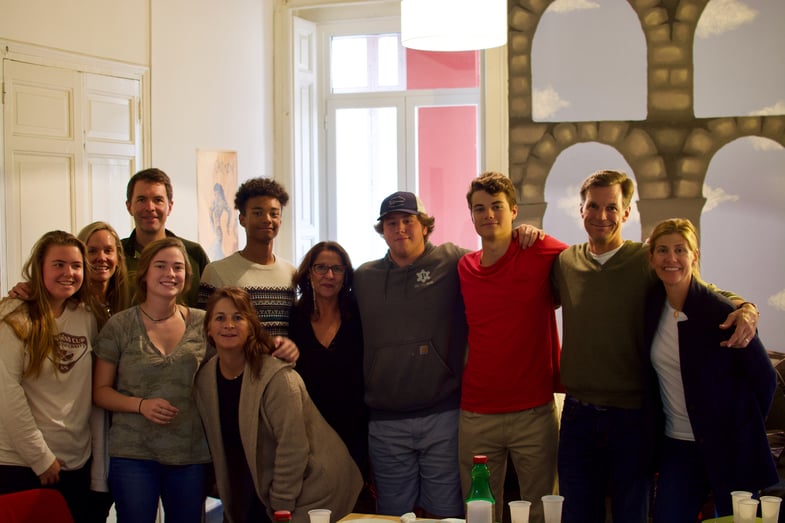 La clase de María José shares their knowledge of Segovia cuisine and tapas, and how to make a restaurant reservation in Spanish! 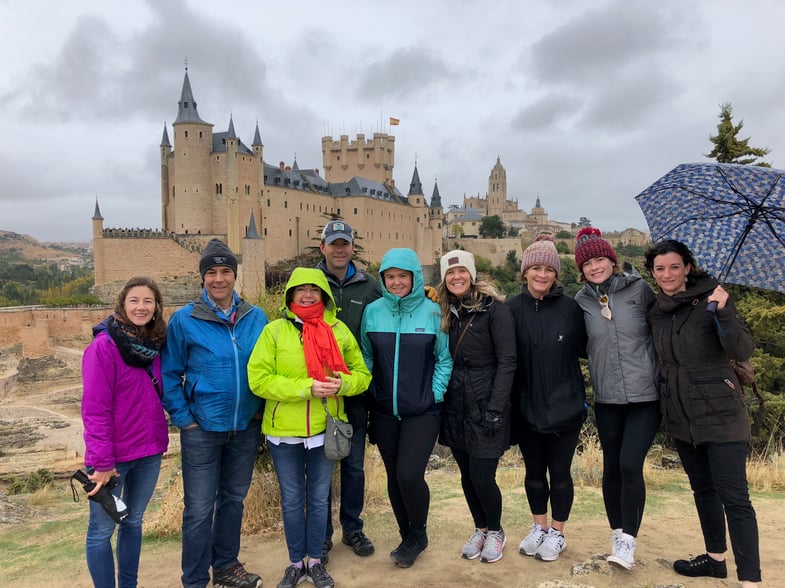 Several families braved the unseasonably cold weather and began Saturday morning with a walk to views of the Alcázar (castle) and through Segovia’s San Marcos neighborhood.

As my knowledge of Spanish broadens, so do my relationships with this family. By understanding what they’re saying, I get to hear the side comments the kids make about each other, the funny remarks Angela shouts at Pablo and Fran’s dad jokes and giggles. I’ve become a piece in their puzzle of comical sarcasm and jokes. I’ve come to realize that meals aren’t my favorite times in the day with them, it’s the ten minutes before meals, because the scene never changes. Vikki, Fran and Angela weave around each other in the narrow kitchen talking over one another but all listening at the same time. Vikki usually is complaining about people or classes at school while Angela leans over the stove sautéing whatever delicious food she’s prepared and Fran leans against the counter drinking water and giving his input. When we’re all seated comes the best part, which is Angela screaming in her scratchy voice “PABLO! VENGA!” about four times until he slouches in. 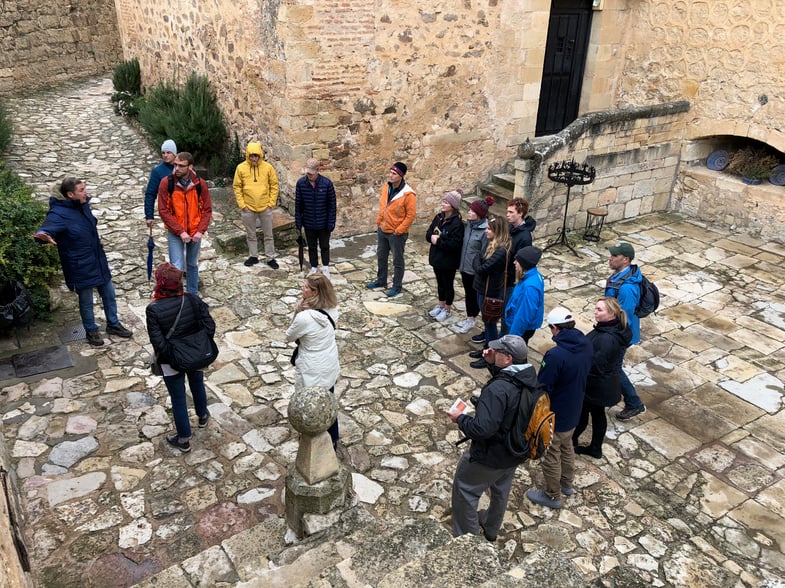 Proctor en Segovia students and parents visit the beautiful walled medieval city of Pedraza and its castillo, purchased and lovingly restored by the painter Ignacio Zuloaga. 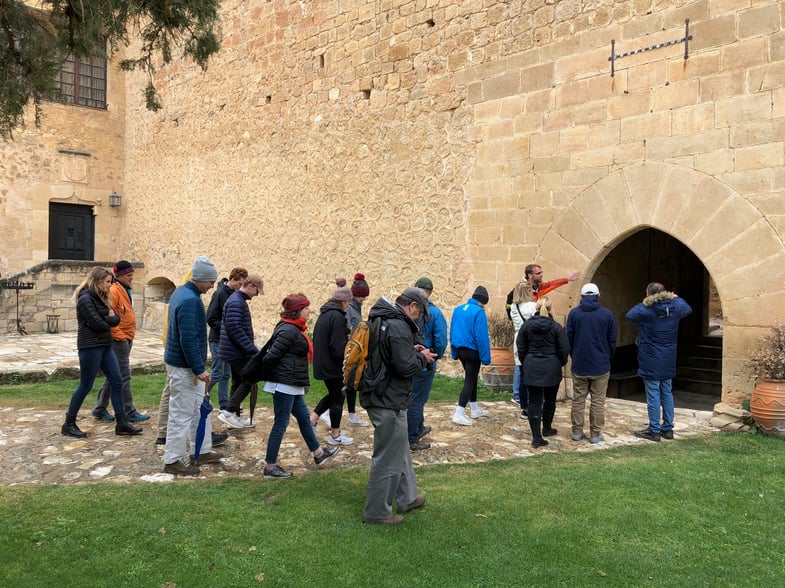 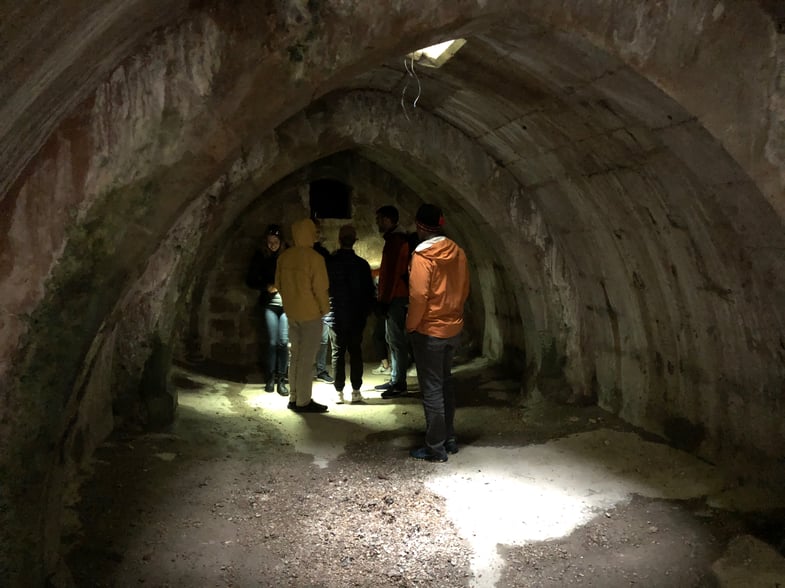 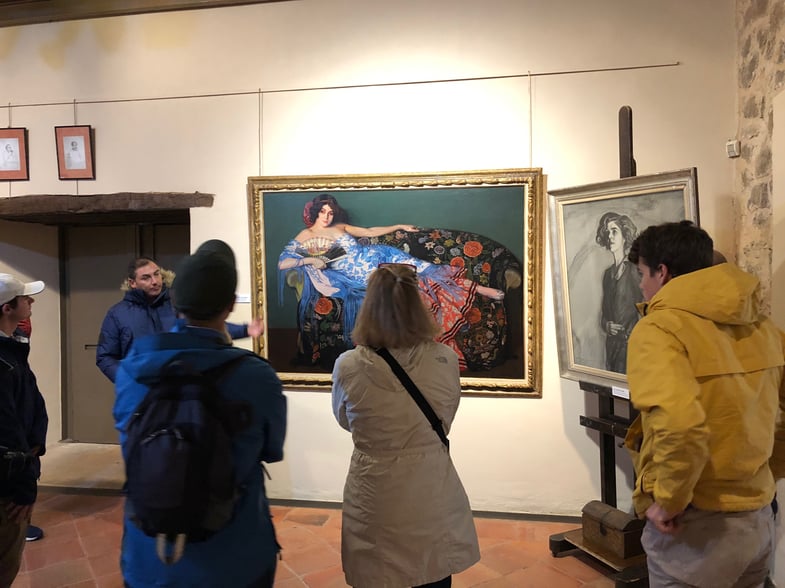 Several of Zuloaga’s works are on display inside the castle.

I’m still one language apart from these wonderful people, but yet I would call them my family. Six out of the seven days of my weeks, I have an amusing story to tell from the past day regarding my homestay. It’s these small moments with them that I yearn to tell people about that I cherish. For most of my life I have never eaten mayonnaise because it's the only food I refuse to put in my body. When Angela brought homemade mayonnaise to the table, I explained this to her and she told me just to taste it, so I did. This may not seem like a big deal but to me it was. She is probably the only person that I would let talk me into trying that horrible food, and I’m glad I did because now she brings it up from time to time for a laugh. I practically brag to the rest of the group about how much I lucked out with getting placed in this house. The comforting greetings and smiles I receive when I enter their home has helped me enjoy my experience here more than I could’ve imagined. 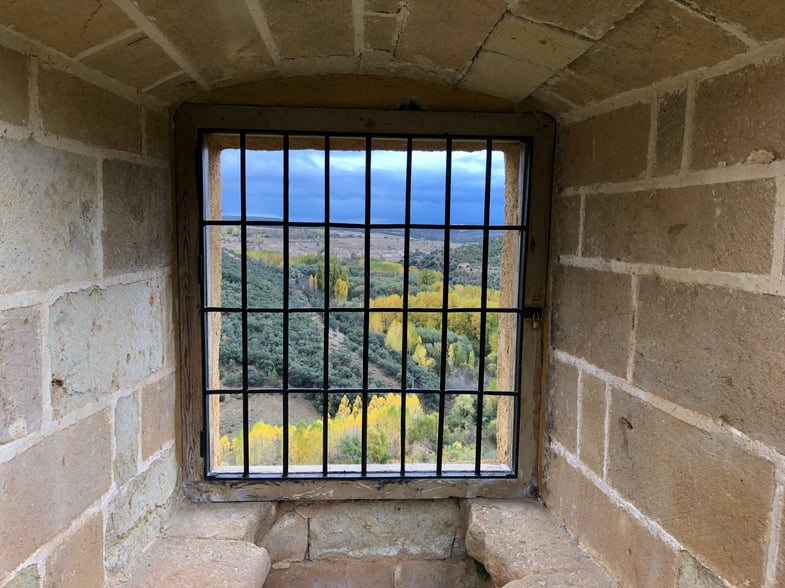 Lila B. '20 with her visiting parents and host mother Maruja. 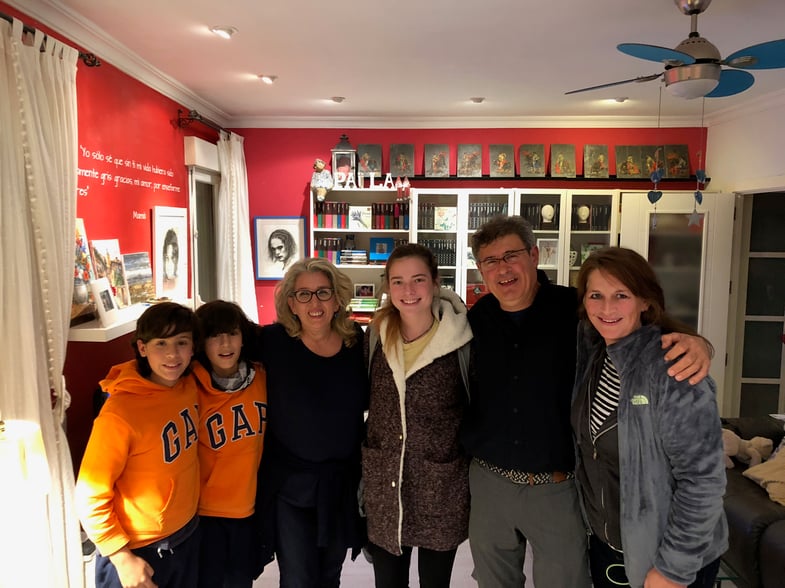 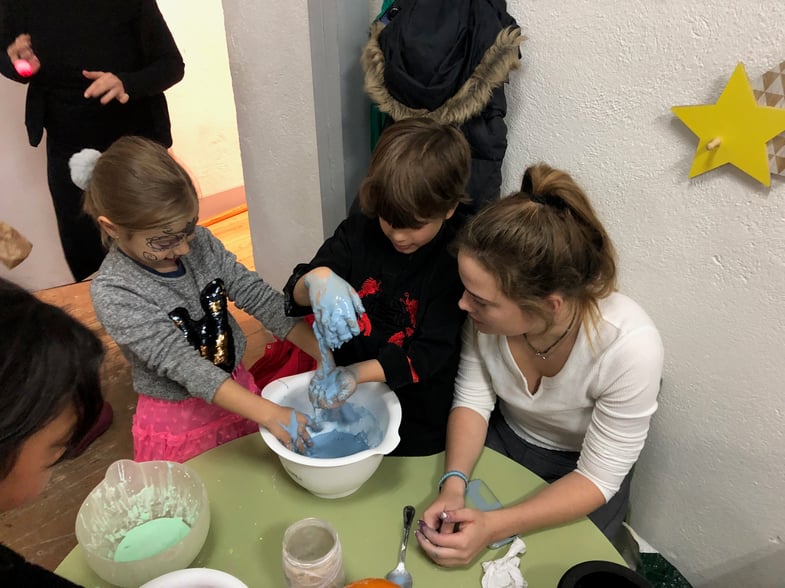 Lila B. '20 and Campbell '20 made slime and played for a Halloween party at a local elementary school. 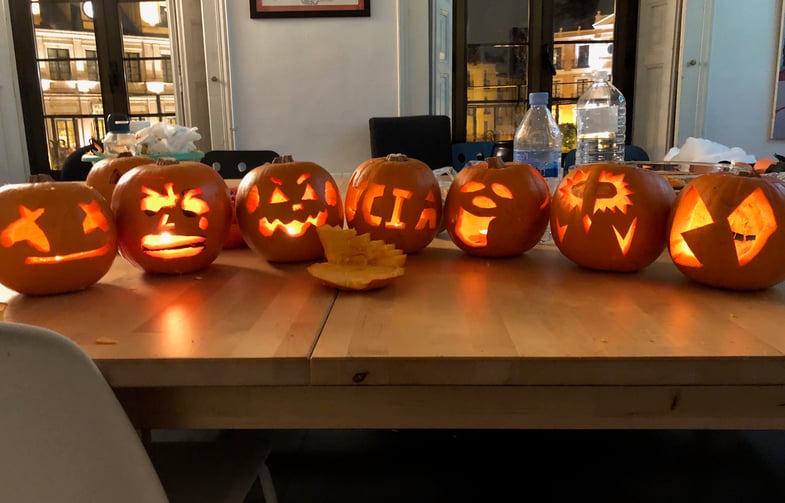