I was very excited for our excursion to Barcelona, which ended up being one of my favorites. At this point in the term, I feel adjusted to the Spanish schedule and culture, and find myself feeling more and more at home with each day that passes. While I do miss being able to understand everything being said around me, it’s becoming easier to have day-to-day interactions, whether it’s buying a coffee at a cafe or going up to a stranger to pet their dog, which happens a lot. 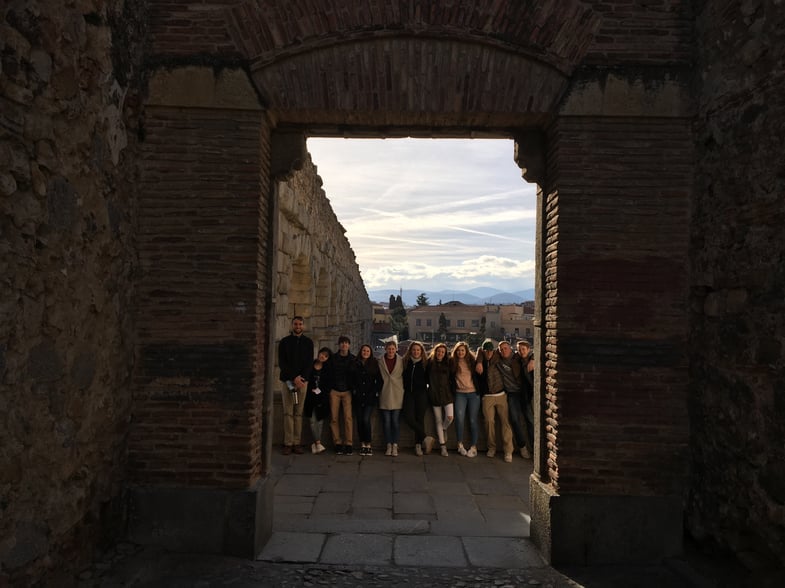 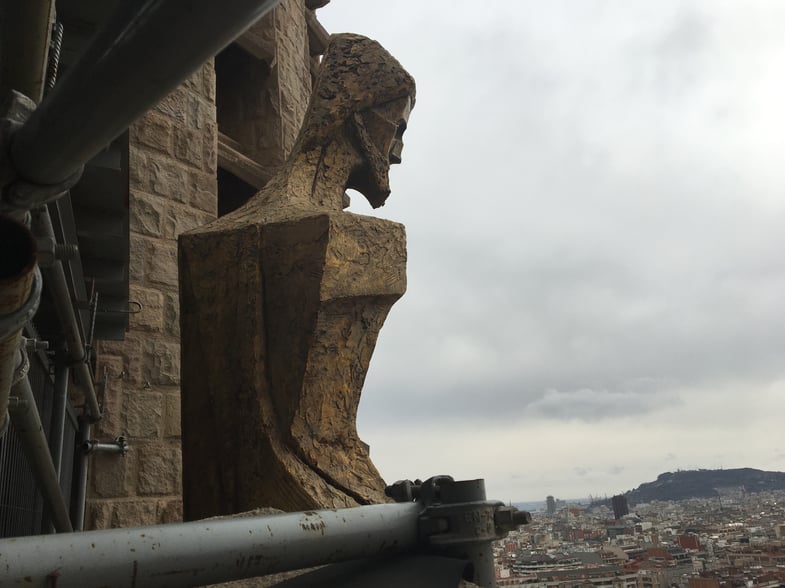 At the top of the "passion facade" of Gaudí's Sagrada Familia basilica.

Because I have felt more confident in my abilities as a Spanish speaker, I chose to take a solo day in Barcelona instead of working with a small group. Our assignment was to find a museum or monument in Barcelona, plan the route, and then take videos while we there about the museum, its significance and its relation to the layers of history in Barcelona. I chose to explore the Palau Güell, a house designed by the famous architect Antoni Gaudí. Working out my route to get to the Palau turned out to be more difficult than expected, I would be taking the subway and would have to change lines halfway through. Luckily, I managed to navigate the Barcelona subway without any problems, and, once I left the metro, I only overshot the Palau by one block. I was thankful that Google Maps allows offline downloads at that point, because one block could have easily become ten without it. Entering the Palau Güell, it was easy to see why Gaudí is a renowned architect, his innovative designs along with his meticulous attention to detail creates a beautiful, cohesive theme throughout all his creations. I explored the Palau Güell for about two hours, until my stomach demanded coffee and a snack. 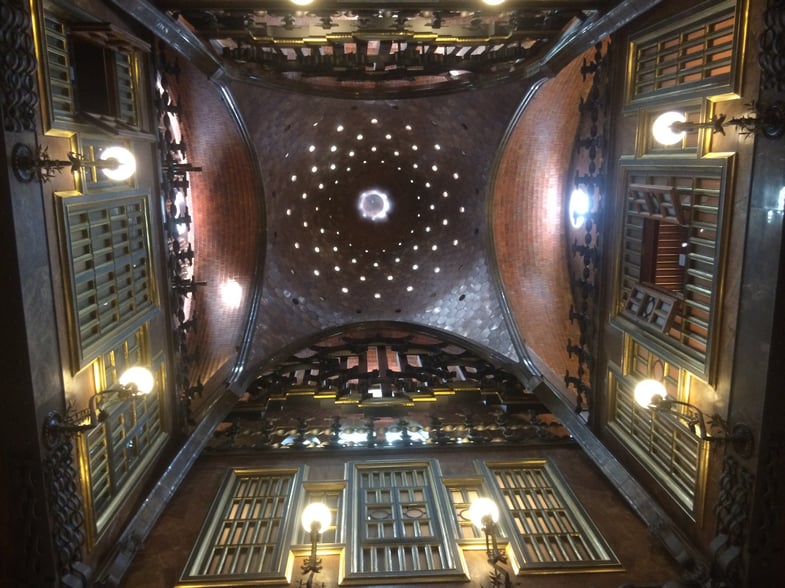 I wandered around Las Ramblas, a major street in Barcelona, and found myself close to the Gothic Quarter, which we had visited the night before. I headed back in that direction, finding a cafe that would suit my needs. While I was sipping my coffee and writing in my journal, an elderly Spanish woman sat at the table next to me, and said hello while she reached beside me to grab a paper. I decided to try and talk to her about the separatist movement in Catalonia in hopes of getting some extra credit points for history class. She didn’t have much to say about the movement, but she enjoyed talking about the United States. She asked me about Trump, a common conversation in Spain, and then began to tell me about her love of American Cinema and her crush on Gregory Peck. This interaction with her was similar to the many conversations I’ve had with Spanish people, everyone is welcoming and interested in talking about America. When I left the cafe, she said goodbye with an affectionate “Bye, Bye guapa”, the favorite word elderly Spanish ladies use about any woman or girl younger than them. 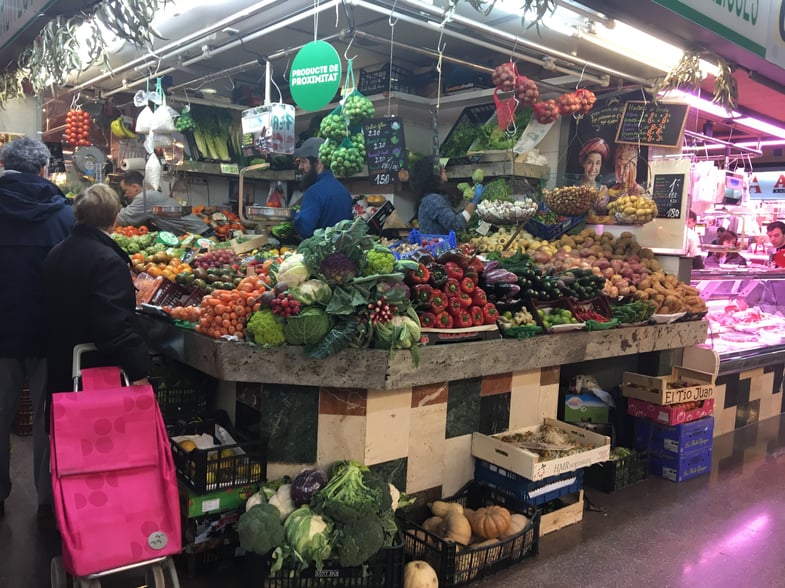 I was sad to leave Barcelona, a place that breathed life and culture and excitement, but I was happy to return home to Segovia to prep for European Art Classroom’s visit this week. Preparation included presentations about the historical significance of many landmarks in Segovia, heading to Granier for a mountain’s worth of cañas, croissants and napolitanas, and organizing various skits to teach Spanish to the new group. I was excited for the group to come because I have a few friends on Euro and I wanted to show them Segovia. The whole day was a whirlwind of exploring the city, enjoying the beautiful weather, eating lunch with my family and a friend from Euro, and attempting to teach a few useful Spanish phrases. All too soon the group had to hop on a bus and head back to Madrid, the end of an awesome visit. Now, we head back into our regular schedule and prepare for our final two weeks in Spain, which, I’m sad to say, will be over in a flash. 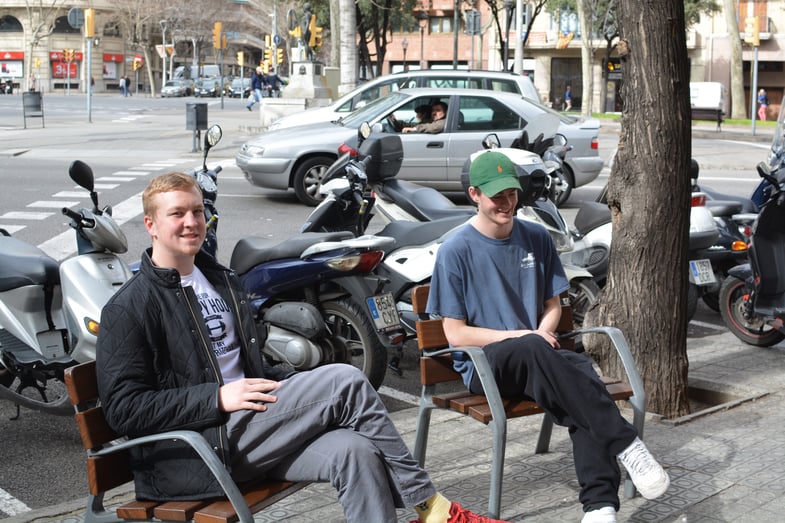 We spent this weekend in the vibrant city of Barcelona! On Thursday, we took an early bus to Madrid and then the high speed train to Barcelona. This was our group’s first experience in Cataluña. We went on a walking tour of the city as a group and learned about the historical background of the architecture. 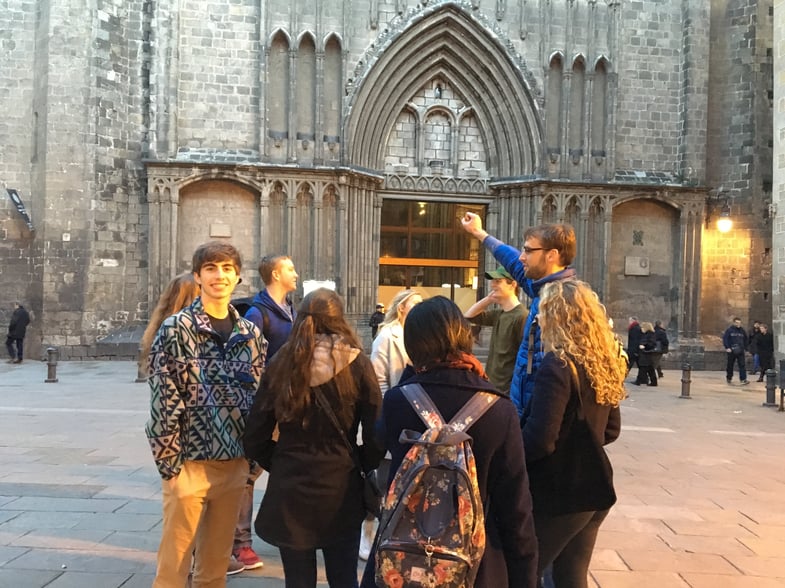 And the walking tour through Barcelona's layers of history begins! 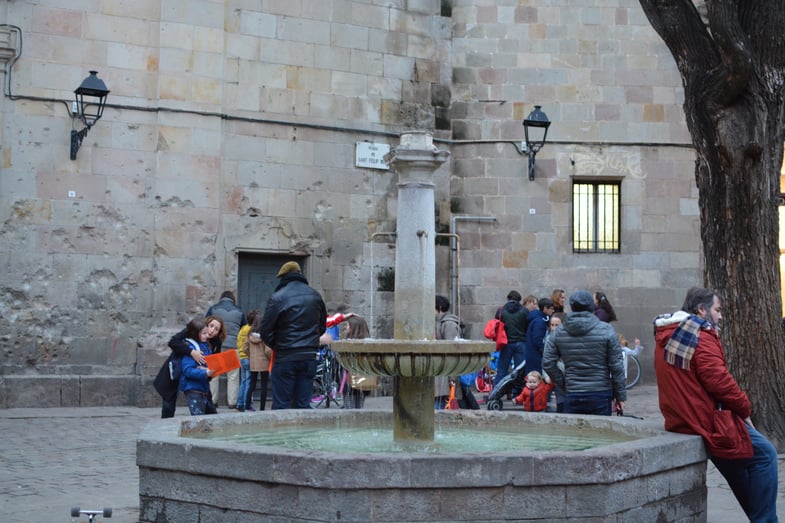 Remants of of the wall of Roman Barcino, built to keep out "barbarian" invaders in the 4th century C.E.

This past Thursday, we had a visit from European Art Classroom, as well as Mike and Betsy Henriques. It was lovely to have these people in our city and in our school. In the morning, we served refreshments and taught the group some basic but useful Spanish. We took them on a walking tour of Segovia, stopping by some of our most memorable places such as the Alcazar, the cathedral, the Roman aqueduct, the Plaza Mayor, and the Jewish Quarter. 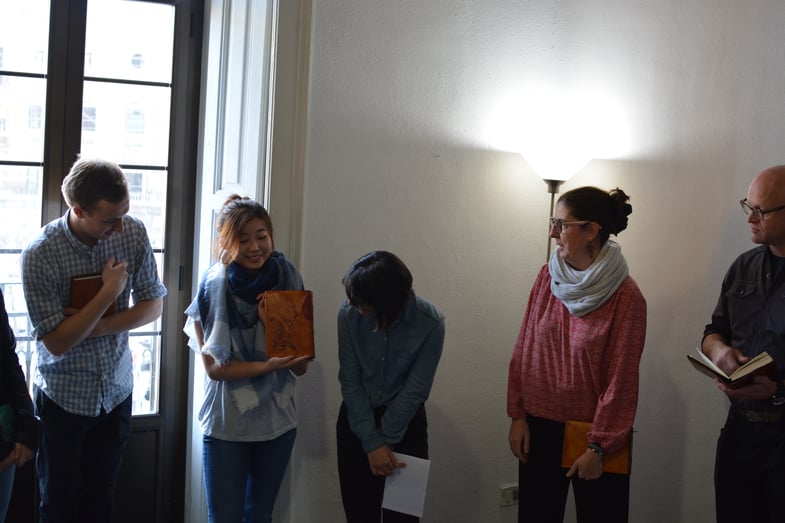 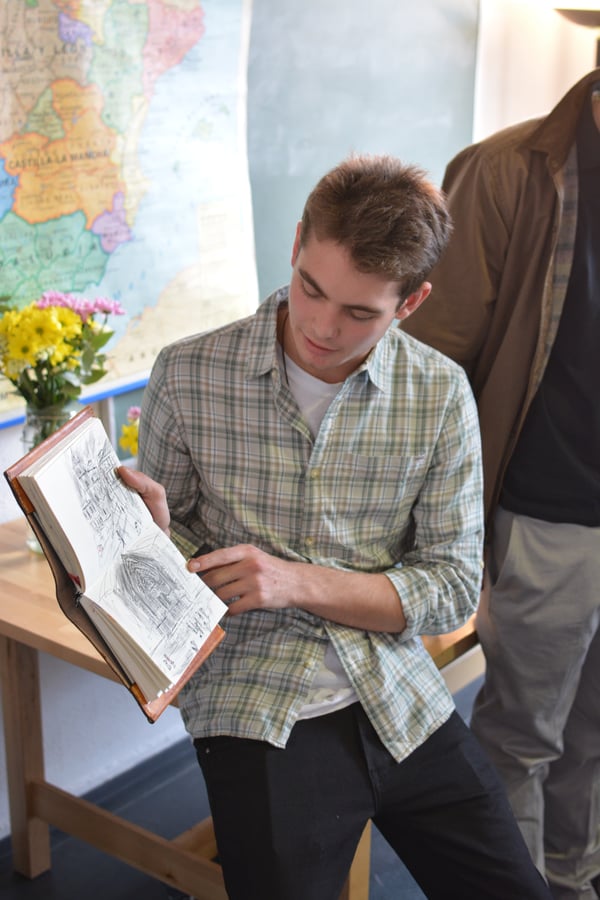 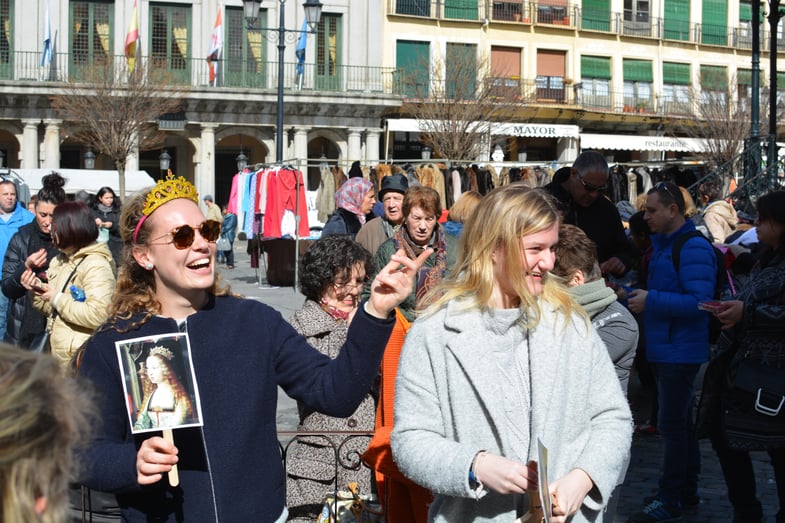 Discussing Isabel de Castilla in the Plaza Mayor of Segovia 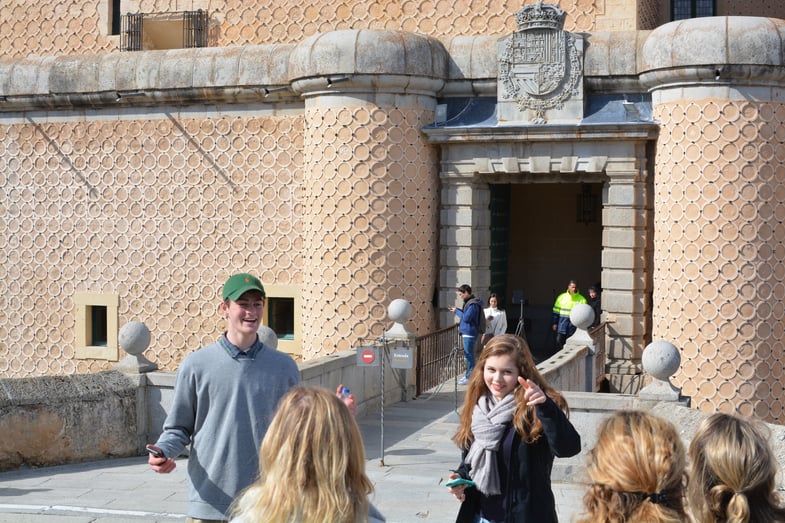 We took some of the group out for lunch for some Spanish food and to meet the host moms. The other half of the group went back to homestays for lunch to get the sense of living with a host family. 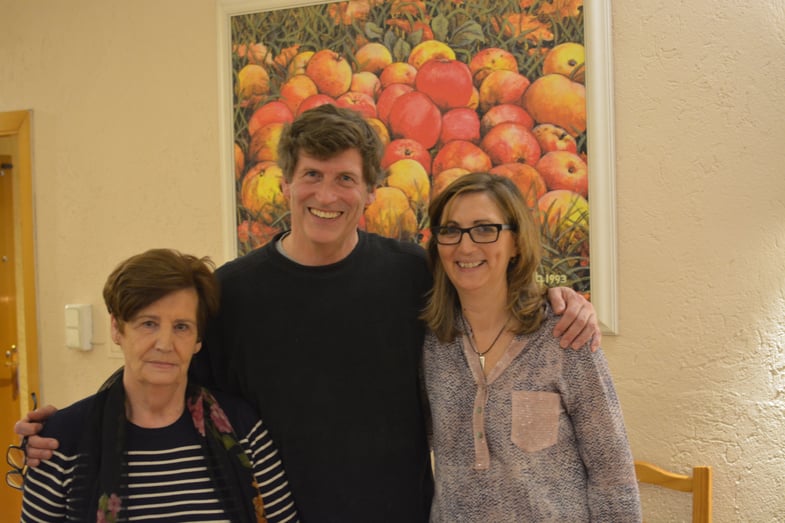 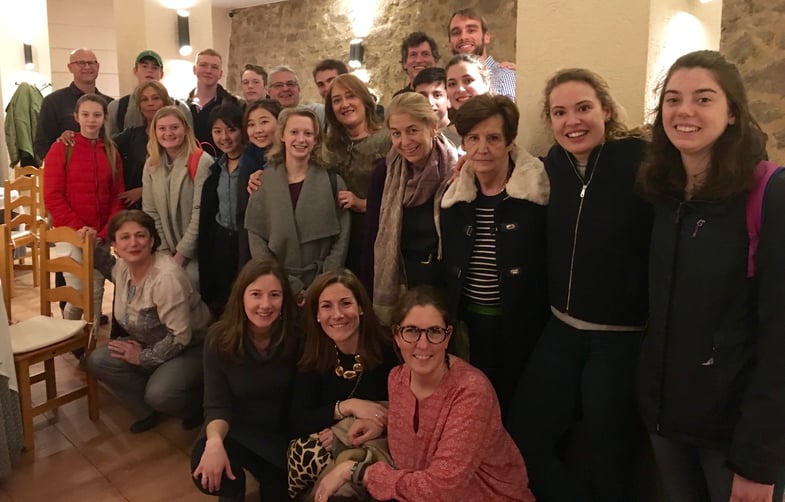 The day was short but sweet -- a huge thank you to the Euro program and Mike and Betsy for coming out to visit us!

Off to Andalucía, hasta pronto!