Proctor en Segovia: Not Your Average Excursion to Catalonia

Our trip to Barcelona commenced on a sunny Wednesday morning. We boarded the bus, which shuttles travelers and commuters between Segovia and Madrid. Once we arrived in Madrid, the crowded and confusing metro brought us to the train station. The journey to Barcelona was easy, although we were all slightly anxious about what lay ahead. 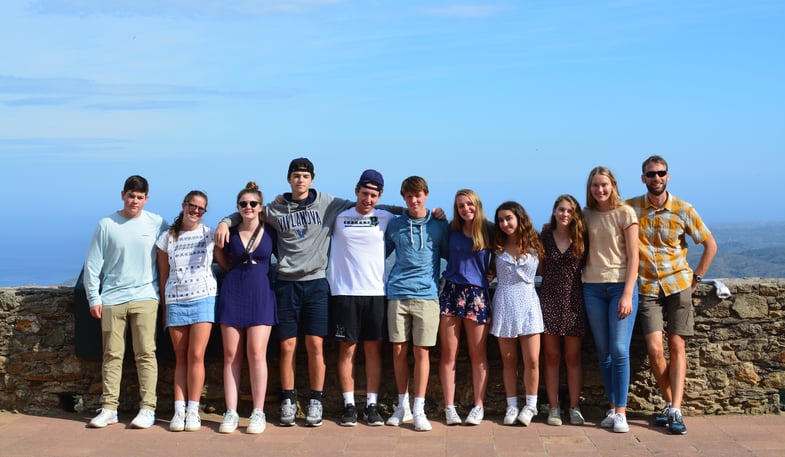 Two years ago, in 2017, Catalan independence advocates (regional and national politicians and activists, including the former vice-president of Catalonia and speaker of the Catalan parliament) arranged a vote on the separation of Catalonia from Spain, which is illegal according to the Spanish Constitution. Nine of these leaders had been on trial for four months, and their nine to thirteen-year jail sentences were announced last Monday. Many people in the city, as well as the rest of Catalonia, are up in arms, and the news has been flashing fires on the street and lines of police fighting off enraged Catalans. We arrived at the train station in Barcelona, but the only slightly odd thing was that the metro was closed and there were armored police vehicles guarding the entrances of the station. After settling into our hotel, the group took a highly immersive and educational walking tour in the Gothic quarter, led by Ryan, aka Mr. History. 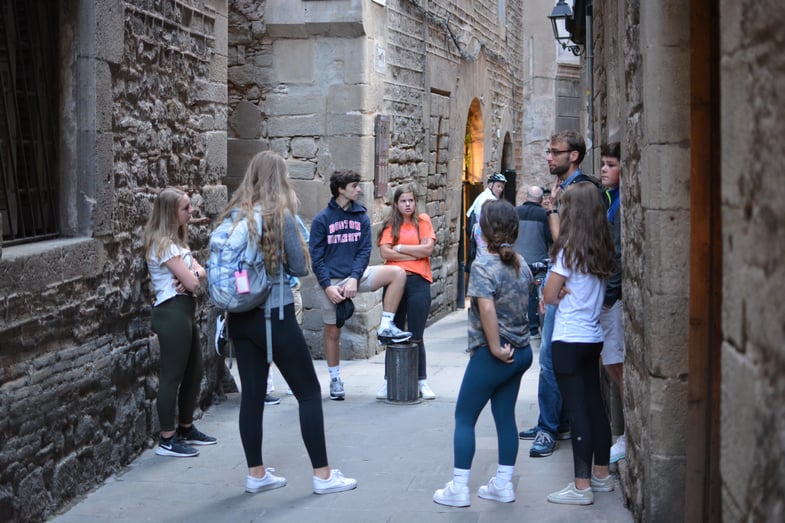 (History lesson from the man, the myth, the legend.)

We dined on exquisite sushi and dumplings, while the street next to us erupted with violence. We emerged into the cool night air, and turned the corner to look at one of Gaudí’s famous works; instead, we noticed the ongoings of an escalated protest. We saw fire a few blocks down, as well as an impressive crowd, and we immediately decided it would be a marvelous idea to abort the mission and return to our safe hotel for the night. 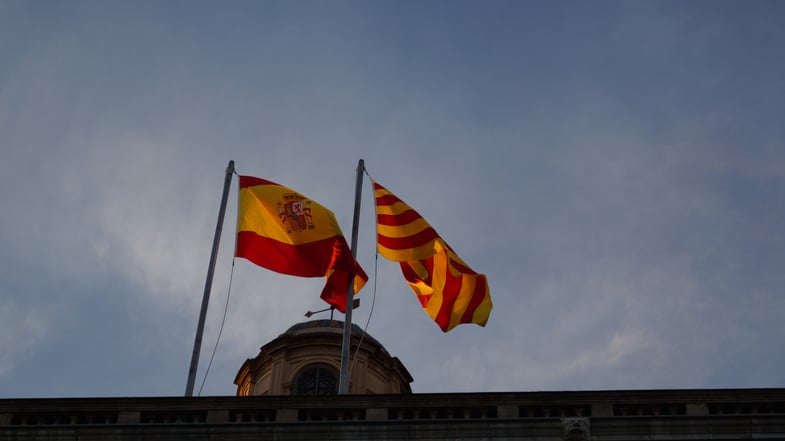 In Catalonia, the Spanish flag is featured all around the city, as well as the Catalan flag. The Catalan independence flag is most popular during this time, which is draped out windows or worn as capes to show support for the separation of Catalonia from Spain. (Photo credit: Sophia '20). We woke up to a sunny, hot and blue-skied Barcelona on Thursday morning. There were no remnants of the night before, well… except for a couple burned trash bins. 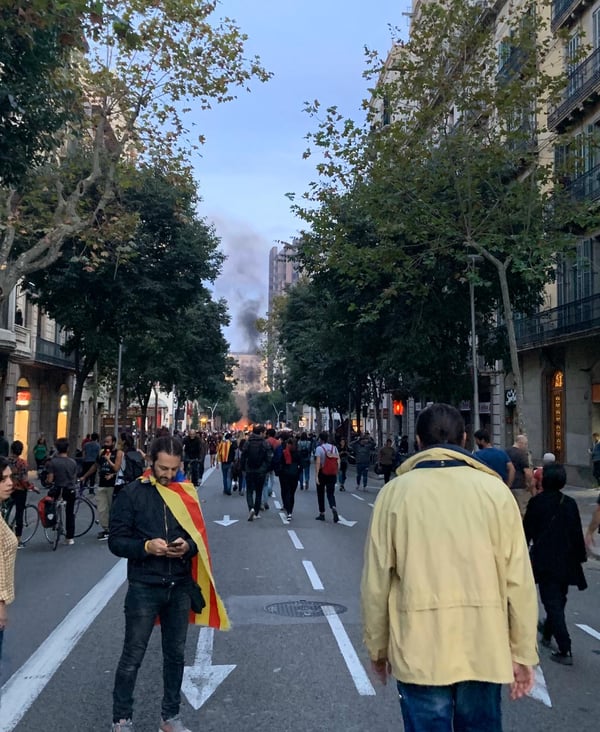 One of the ways that the violent protesters have been showing their displeasure at night is by burning these trash cans. They basically make a massive fire and push a bunch of trash bins into the middle. They did this all over the city.

The group walked to a nearby café, ordered breakfast, and took some time to work on our homework. After breakfast, we made our way through the surprisingly clean Barcelona metro. We were a little apprehensive because as we walked to the metro station, we saw a large protest and people wearing Catalan independence flags as capes streaming from the station. The protest was peaceful though, and we made it to La Sagrada Familia easily, one of the most well-known basilicas in the world. La Sagrada Familia was truly one of the most spectacular buildings I have ever seen. The only facade that Gaudí could finish during his lifetime was breathtaking and the detail was impeccable. The inside was very amazing as well; Gaudí intended for you to feel like you were in a forest, and he sure was successful! Colored light from stained glass windows streamed into the massive basilica and left us standing in awe. 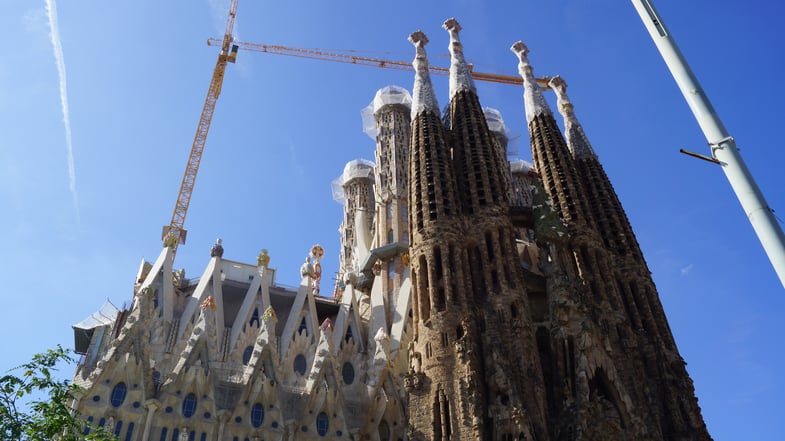 La Sagrada Familia's principal architect was Antoni Gaudi who is now deceased. Construction commenced on March 19, 1882, and is still going to this day. The construction is expected to finish in 2026 on the 100th anniversary of Gaudi’s death in 1926 when he was hit by a tram. Anyway, it is really beautiful and features facades of the birth and death of Jesus. (Photo credit: Sophia '20). 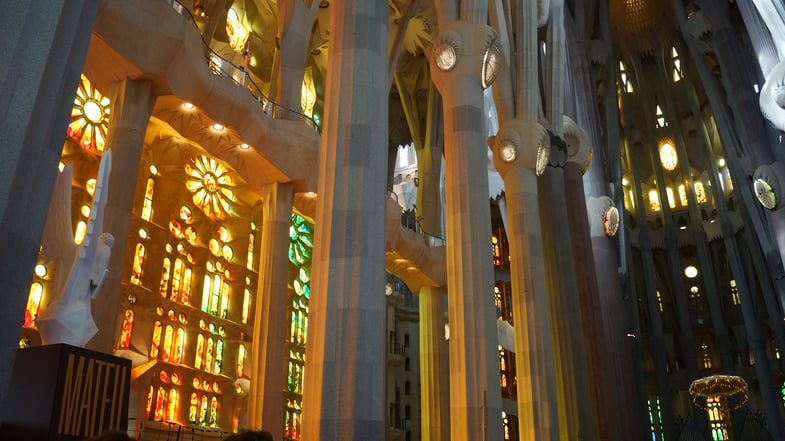 I know I plan to visit the basilica when its construction finally ends, and so should you! We left La Sagrada Familia and split up for lunch. Jane, Ashely and I dined with Ryan, Mikaela, and Lucia at a divine Mexican restaurant where Lucia (Ryan and Mikaela’s daughter) consumed an impressive amount of black beans and we devoured our cheese quesadillas, tacos and skillet cookie sundae. Afterwards, the group split into three; Ayla and I went with Laura to Parque Güell while the rest of the group went to the Maritime and Picasso museums. Although getting to the park proved slightly difficult with many steps and subway stops — it is placed in the outskirts of Barcelona at the highest point — the views were worth it as we watched a beautiful sunset on an even more beautiful city. 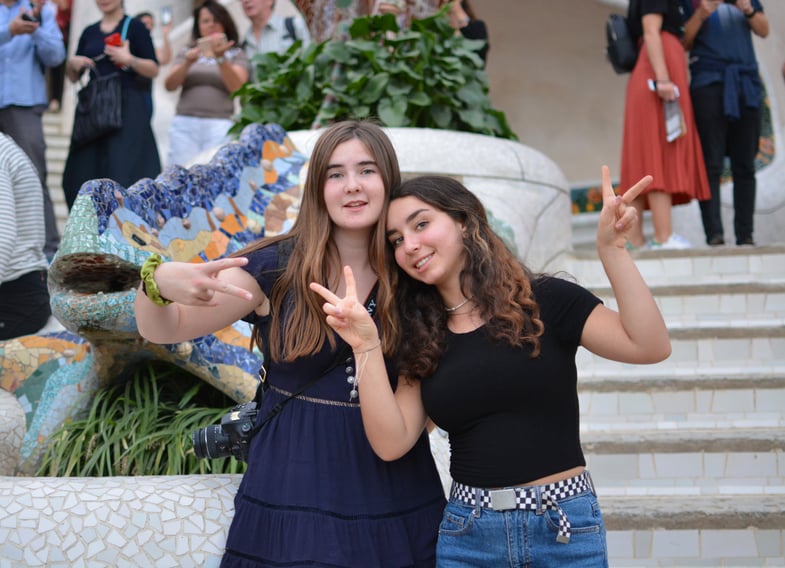 Parque Güell was constructed by Gaudi around 1900 for an influential family at the time, the Güells. It was meant to be a place for rich families to settle outside of the city and is now a destination for tourists all over the world, featuring famous mosaic structures, benches etc... 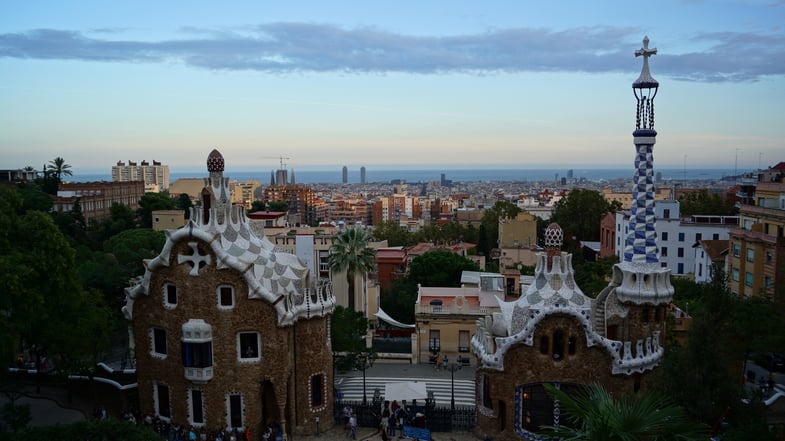 Later that night we had an authentic Catalan dinner and Jane and I befriended the waiter (José Antonio). After dinner, we went back to the hotel to catch some z’s for our travel the next day.

Friday was another spectacular day, however we spent the majority of it driving away from the bustling city to the countryside. The drive took longer than expected because of a few protests, however it was nothing that our positive and cheerful group couldn’t handle. We made a quick pit stop at the dazzling and devilish Mediterranean, and happened upon the ancient Greek city of Empúries. After consuming far too many jamón bocadillos, we drove the last thirty minutes to the three-hundred-year-old stone farmhouse where we would reside for the next two nights. Although we were all scared at first of the haunted mansion, we were soon comforted by some group volleyball and ping pong. The night concluded after a wonderful dinner of pizza and brownie sundaes for dessert. 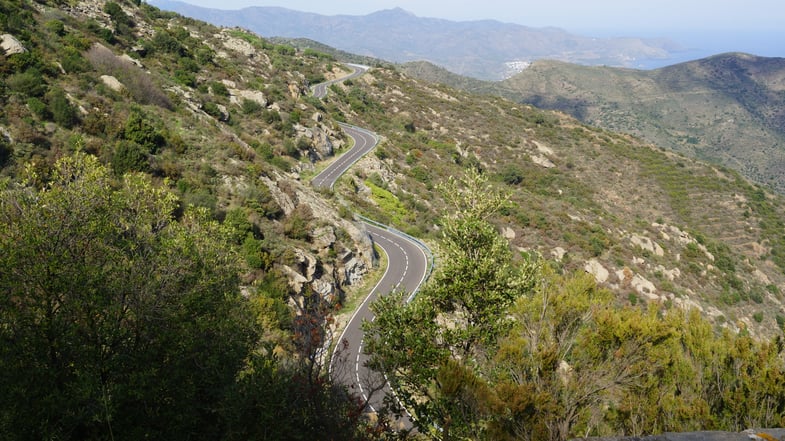 Winding road up to the monastery. (Photo credit: Sophia '20). 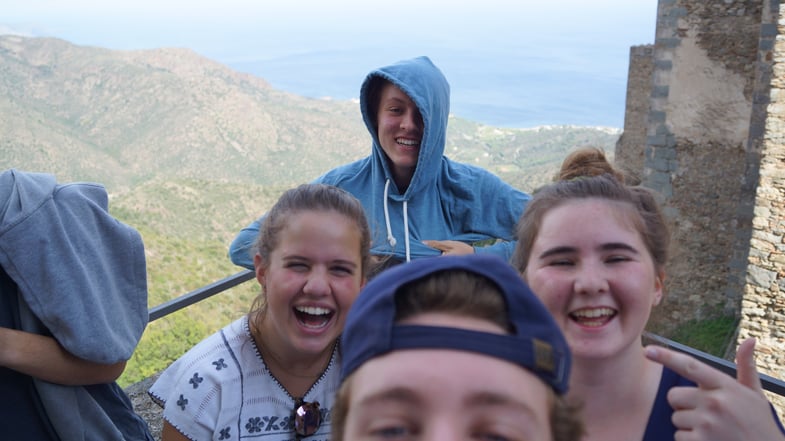 The sugar highs from the night before didn’t wear off until rather late, so Saturday morning was a tough wake up. After eating delightful raw pancakes made by none other than yours truly, we hit the road in search of new adventures. We climbed up, gaining more and more elevation until we were looking down at the sprawling sea and monstrous mountains. After doing a photoshoot and learning a bit of history at the Monastery of Sant Pere de Rodes at the top of a mountain, we wound our way down to the coastline to a small, whitewashed town named Cadaqués. The entire group felt as though we were on a small Greek island, with the opaque blue waves crashing against the rocks. Here we ate more bocadillos and sat on a beach for hours, skipping rocks and searching for sea glass. Once we returned to the house, a dinner of empanadas and more brownies was prepared and devoured. Some more ping pong was played, and the group watched part of a slightly boring movie. Everyone sad to be leaving Barcelona the next day, we all fell asleep to the sweet smell of cow manure. 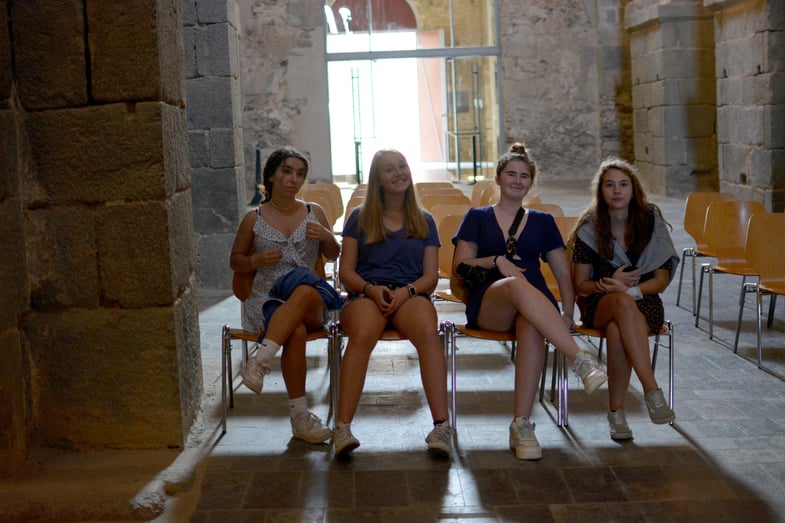 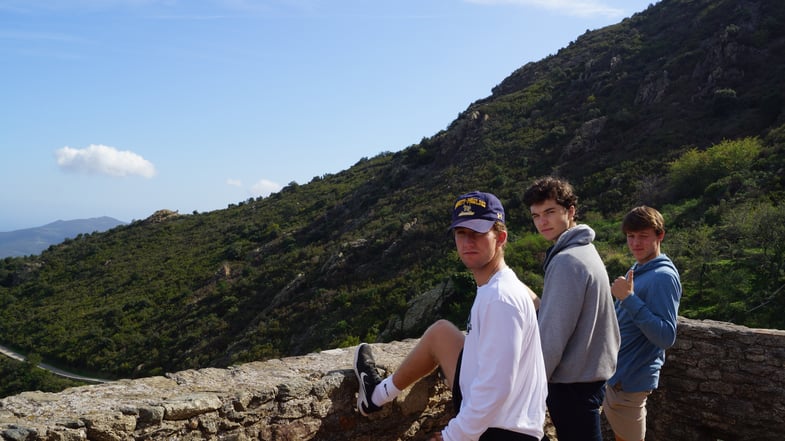 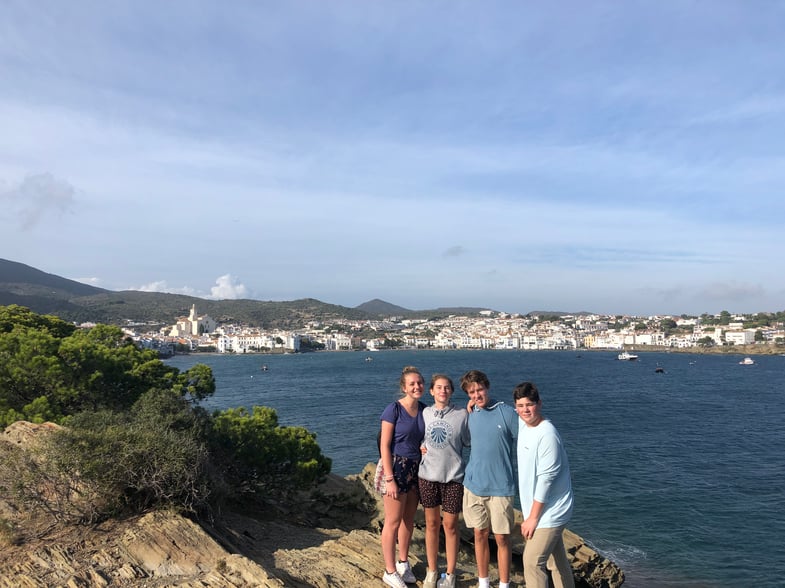 We woke up far from bright-eyed and bushy-tailed, sad to be leaving the beautiful Catalan countryside. After devouring the divine breakfast sandwiches made by Ollie, we piled into the cars, left our “casa rural” and made our way to the Barcelona train station. The train ride went by quickly as we all either slept, watched movies or listened to music and we very tightly made our bus from Madrid to Segovia, being the last ones to board. We were greeted in Segovia by extremely cold weather, surprised to be able to see our breath in front of us. We longed for Barcelona’s sunshine on our brutal walk home. That night was a tough one for many reasons and we all had trouble sleeping. Although we were sad our trip had ended, it was nice to be home. 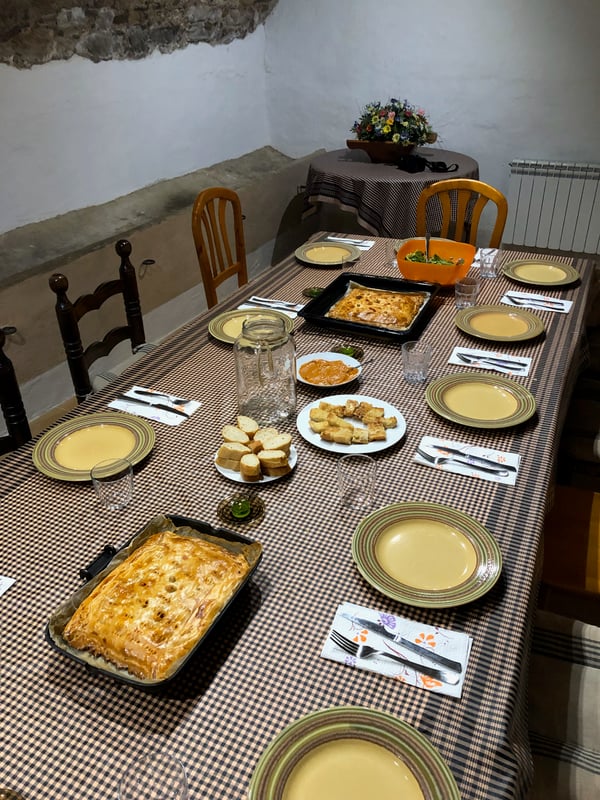 Chefs Ollie '21, Tyler '21 and Will R. '20 prepared a delicious empanada dinner at our rented house in Girona province, Catalonia! 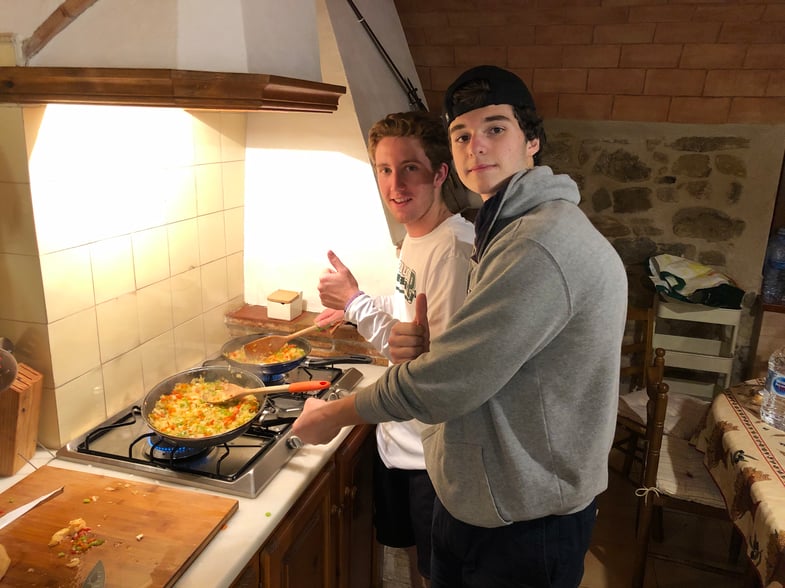 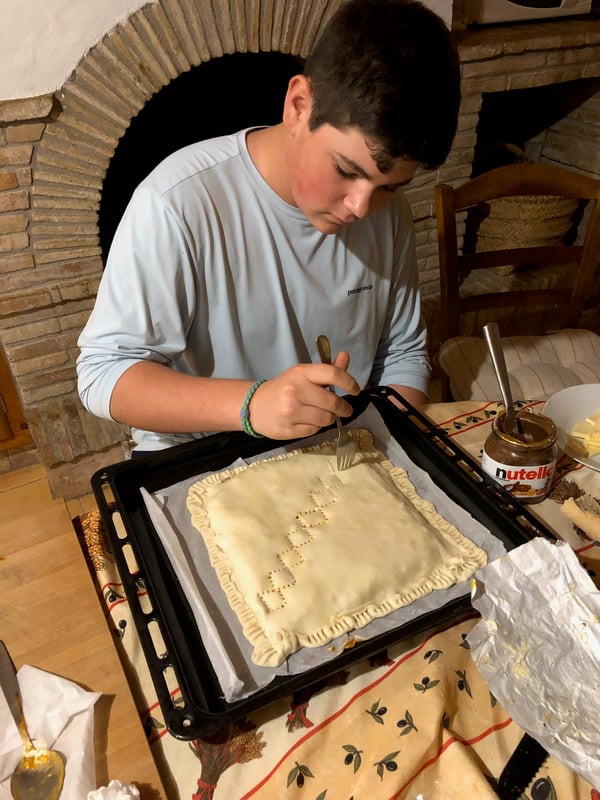