Throughout our first two weeks of our Spain trip our group has done quite a bit. We have found our way around the streets of Segovia and cooked native dishes to Spain and bought all the ingredients from farmers market and local grocery stores. We have created unique and awesome relationships with our host families and have tried to conquer the language barrier. We have begun to learn about the vast history of this country and started to write in our journals. We have done all of this in two weeks, and there are plenty more fascinating activities in the weeks ahead. 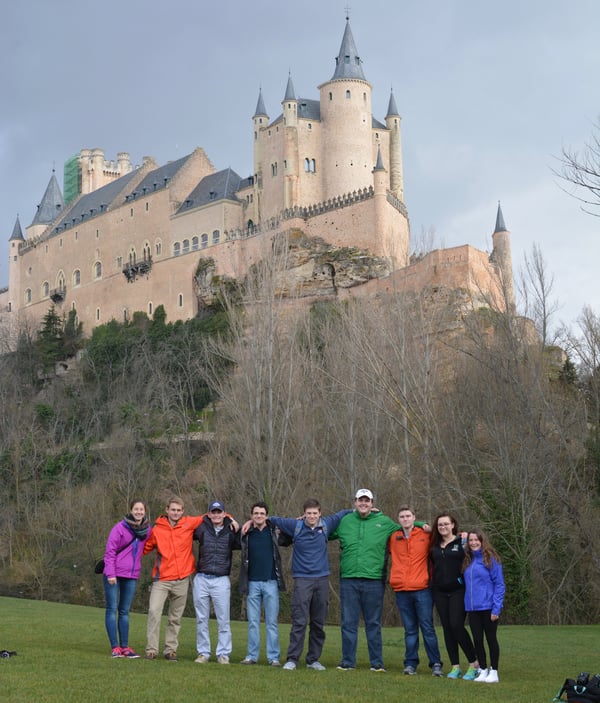 Our first week in Segovia coincided with Semana Santa (Holy Week). Semana Santa is a week that commemorates the death and resurrection of Jesus Christ. The activities mainly started on Thursday, with processions based on the events in the final moments of Jesus’ life (and resurrection) each day leading up to Easter Mass on Sunday. We were all surprised by the costumes of the people in the processions as they sometimes resembled members of the Ku Klux Klan, but we were assured that not only are the nazareno costumes centuries older, there is no relationship between Semana Santa and the U.S. hate group. A lot of dedication went into the processions as they last for four hours and require rigorous amounts of practice. Some examples of roles in the parade include: playing musical instruments (drums, brass and other wind instruments), carrying crosses, and carrying or pushing massive “floats.” My host mother was actually in one of the last processions, dressed in a black veil and headdress (mantilla) as a symbol of mourning over the death of Jesus. Overall, it was a very interesting event to witness. 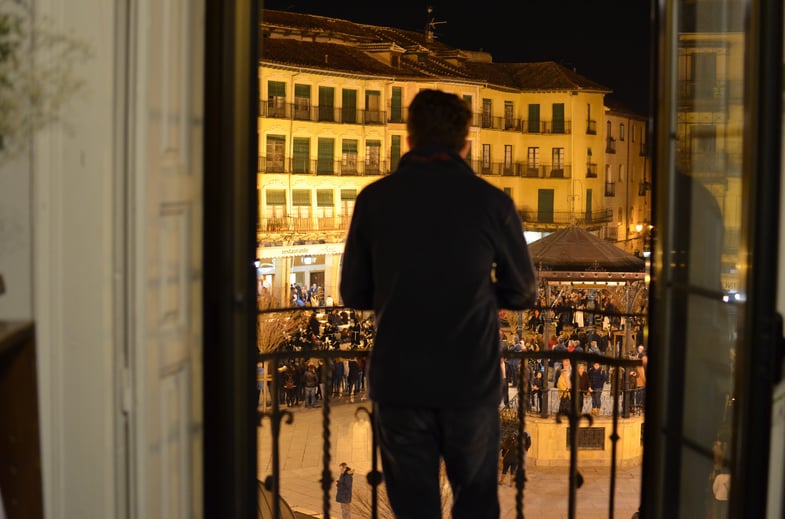 Watching the activity from the school balconies. 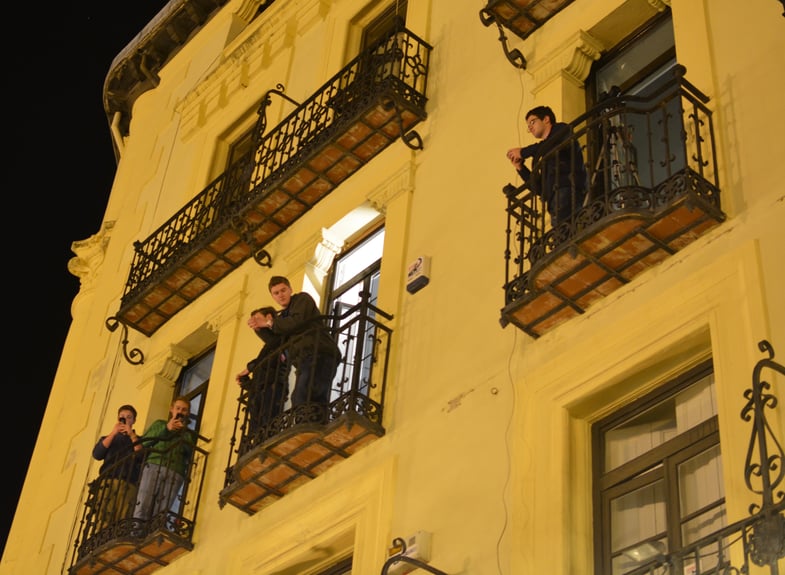 One of the “floats” with a carved wooden “image” of Jesús passes through the Arco de Socorro (gate in the wall surrounding Segovia’s old quarter).
Spanish Cuisine

Every Thursday, while we are in Segovia, we have a Spanish cooking class during our lunch break. During our first week we made crepes con jamón y queso, a salad, fruit smoothies, and a traditional Semana Santa dessert called torrijas. Torrijas are very similar to french toast. Before we started cooking, most of the group went to the local market in the Plaza Mayor, and several group members went to a local grocery store with Ryan to get the necessary goods to make the final product. When we got back to the school we split up into little groups to do different tasks. I was in charge of making torrijas and crepes with Drew. The cooking was a success, and we had a great, homemade meal together. 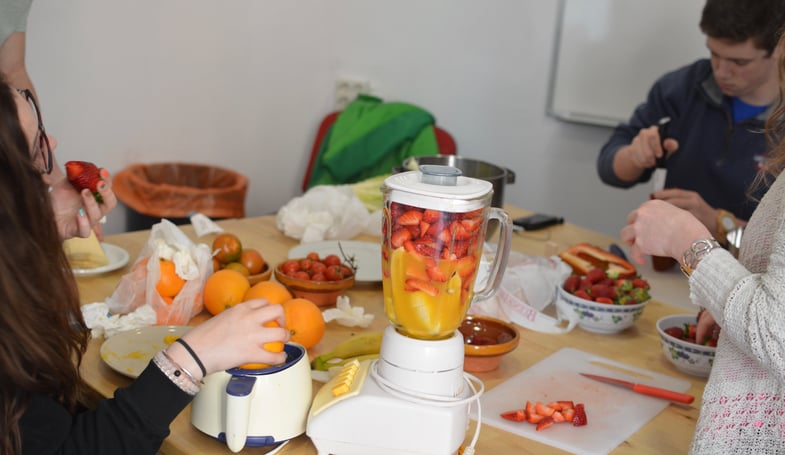 Afternoon activity cooking class at the school: the salad and smoothie team!
Our most recent class was this past Thursday, and we made tortilla de patata en tortilla mexicana, another salad, and smoothies. Tortilla is is a Spanish dish with egg, potato, onion, salt, and pepper. It is similar to a big omelette with potato and onion. Nathaniel wanted to put this dish in a Mexican tortilla with some ham and salsa, so we did. Again, we had to go to the market and to the store, but we didn't need to get as much as the first time because we had many of the ingredients. 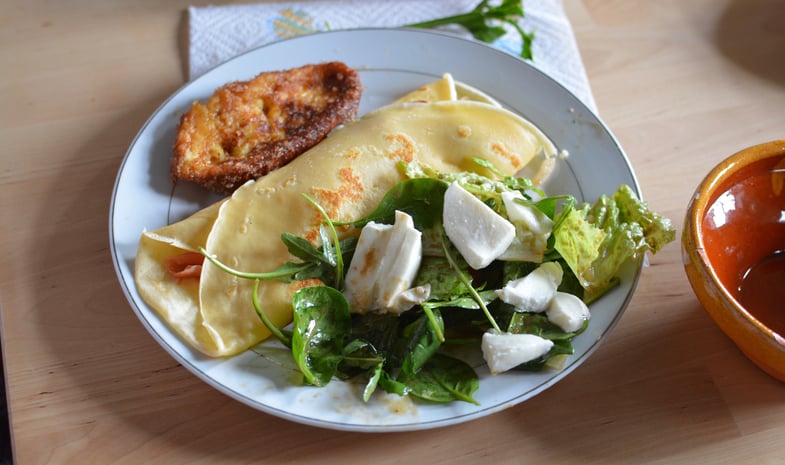 From top to bottom: torrijas, crepe with jamón y queso, and a spinach salad with balsamic vinaigrette and fresh mozzarella. 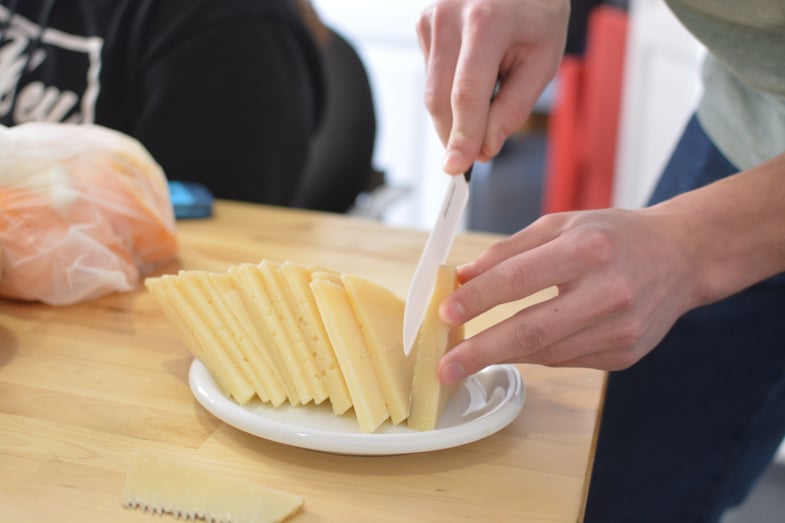 No Spanish meal is complete without a tapa of queso manchego de oveja (cured sheep cheese). 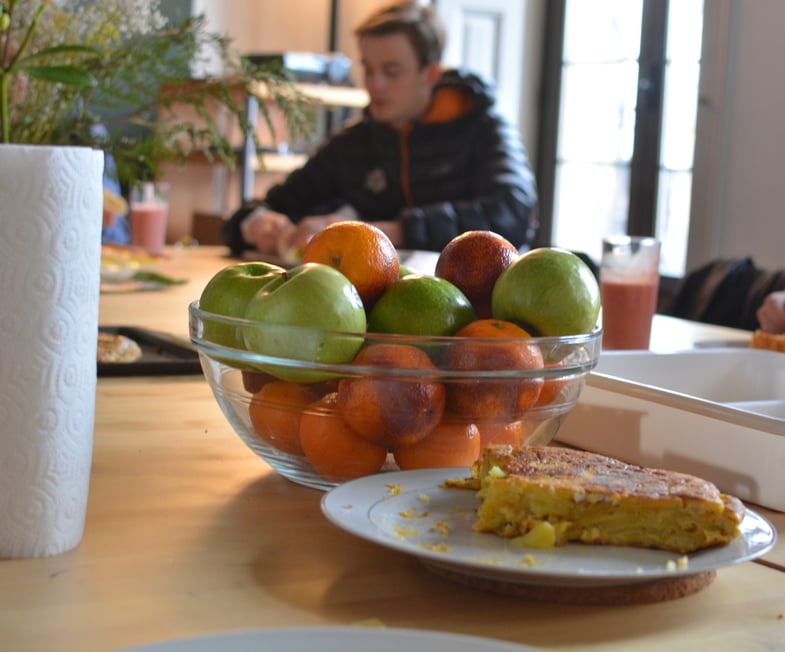 The idea of living with another family is hard to imagine. You are so used to living in a safe area and with people you have known all your life. So imagine leaving your comfort zone of familiar faces to go live with a family who you have never meet for about two months. You will definitely be out of your comfort zone because part of living with a new family means you are going to have to get used to their rules and also their language. The language barrier is one of the most difficult things about living with a host family in another country because neither student or family knows each other's language. Most of the time communicating is a mix of English and Spanish at the same time, or Spanglish. Living with someone new is frightening, but they take you in like you are their own children. They want to get to know you, and you will have to get to know them. They are wonderful people. In the house you definitely will have to try to speak Spanish because most of the host families don't understand English. Lunch is a huge meal, and, during this break, many stores close and everyone goes home to eat with their family and friends. 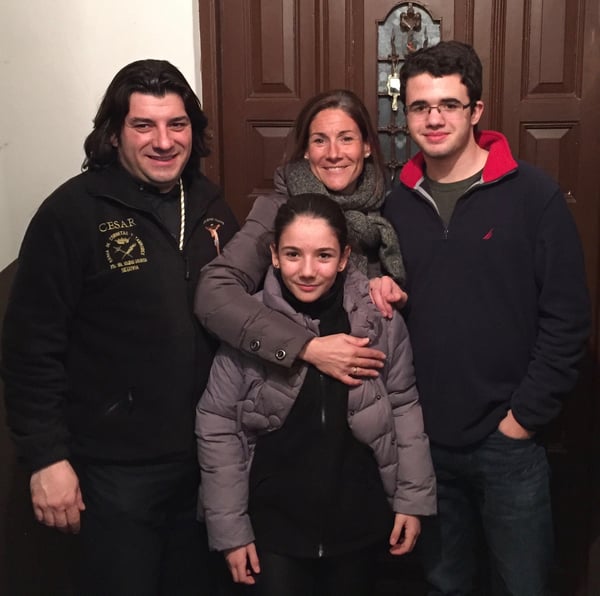 César and Olga with their daughter Jimena and host student Matt!
At the end of these two months you will be considered a member of their extended family. Going back to the the states will feel strange because, for the past eight weeks, you have been used to a different routine, speaking Spanish, and unfamiliar faces have become familiar. So, when we get off the plane in Boston, we will be like tourists, because we been so used to living in Segovia. 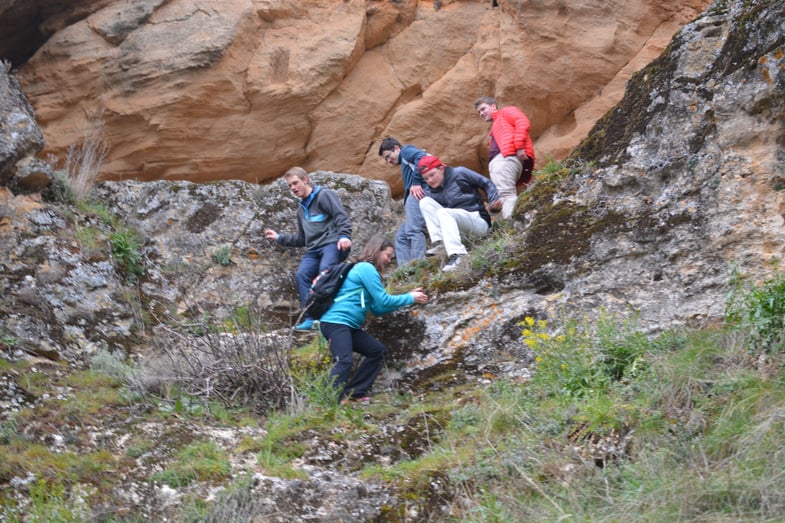 Hiking near Segovia's old quarter in search of caves (and a good workout!)

Proctor volunteers with participants in an afternoon literacy program funded by the City of Segovia.
Modern Dance

Traveling to a new country is terrifying enough. Having to learn a new language for some or adding to their skills for others, living with a new family who may not even speak English and being in a new group can add to the terror. The one thing I did not think about was how friendly everyone is and how at home you feel within hours of arriving. As these two weeks have passed, each day is a whirlwind, but every second you become more of a true “Spaniard." Dance has always been relaxing for me. Listening to music throughout the streets, dancing with friends on the way home at night are ways to connect with the group, yourself and other Spaniards. I was lucky enough to have the chance to join a modern dance class at the gym this past Thursday. I was instantly welcomed by the teacher Blanca and the girls in the class. I learned so much more than a routine! I learned that no matter where you are you are never too far from home.

On our first weekend we made the long and treacherous bus ride up to La Granja to see one of Spain's many royal palaces. Upon arrival I could not help but feel slightly intimidated by the tall and wide neoclassical architecture of the palace. The palace’s interior serves as constant reminder of the theocratic cycles of Spain's political history. Our guide and teacher is a very tall man who has demonstrated a genuine passion for the history of Spain. With every painting, tapestry or statue we passed, he was able to give an interesting insight to its historical significance. The park and gardens outside of the palace was a grand display. Massive statues and intricate fountains were ubiquitous in the courtyard. 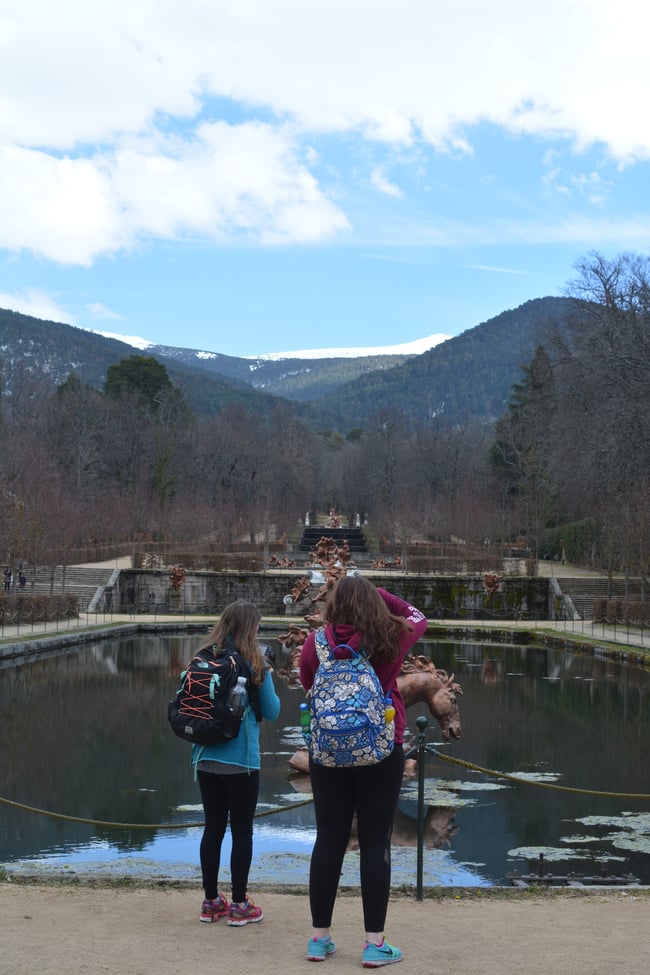 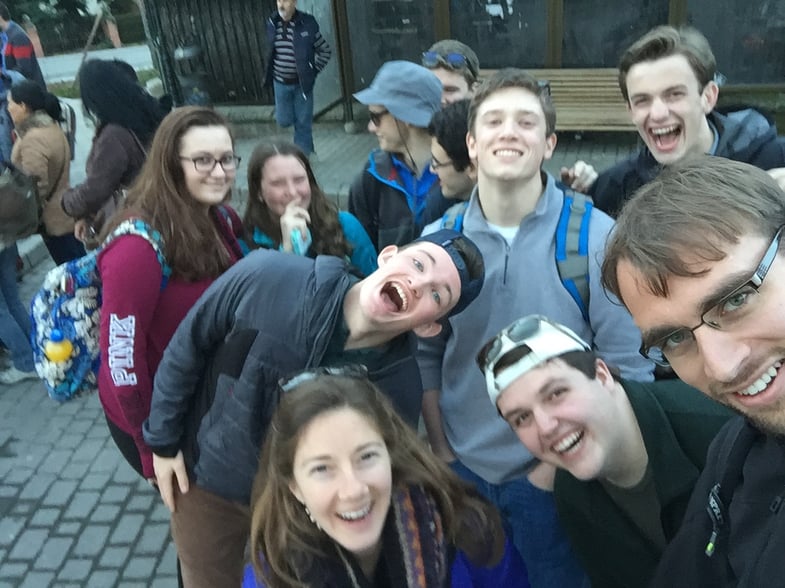 We met up at the school at 5:45 on a Thursday afternoon to get our instructions. My power team consisted of Drew Childs and Matt Arruda. The three of us got our instructions and were on our way. We followed the instructions which took us down back roads and alleys to several destinations. We eventually reached the bus stop where we met with the other groups and waited for the bus. We all got onto the bus not knowing our final destination; some of us had some suspicions. After around ten minutes, we got off the bus followed by Mikaela. We arrived at a bowling alley and then spent the rest of the night bowling and having a blast.

One of the many parks and gardens in Segovia 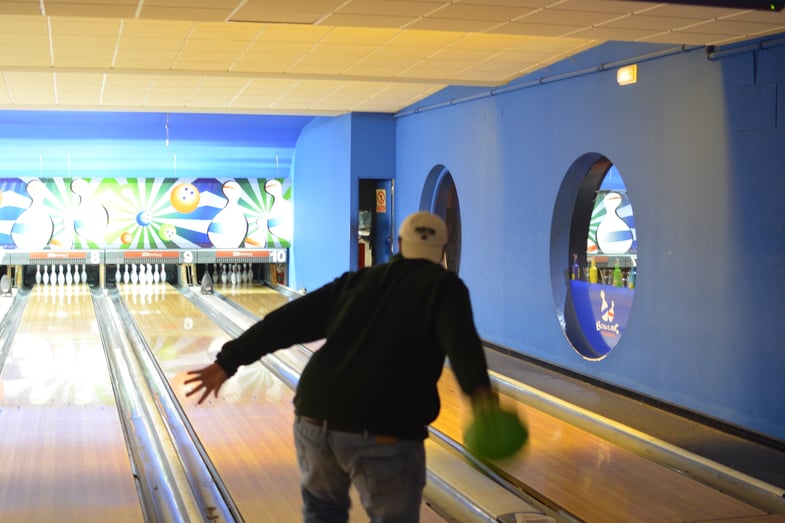