Proctor en Segovia: South to Granada and the Alborán Sea

Waking up on a sunny Monday morning in Segovia, we met together as a group in front of the bus station, and set out for the trip to Andalucia. First taking the high-speed train to Madrid, then Antequera and finally a coach bus to the city of Granada, we have experienced the conspicuous convenience of the ground transportation in Spain. Granada is located in the very south part of Spain, close to the coastline of Mar de Alboran (the westernmost part of the Mediterranean Sea). 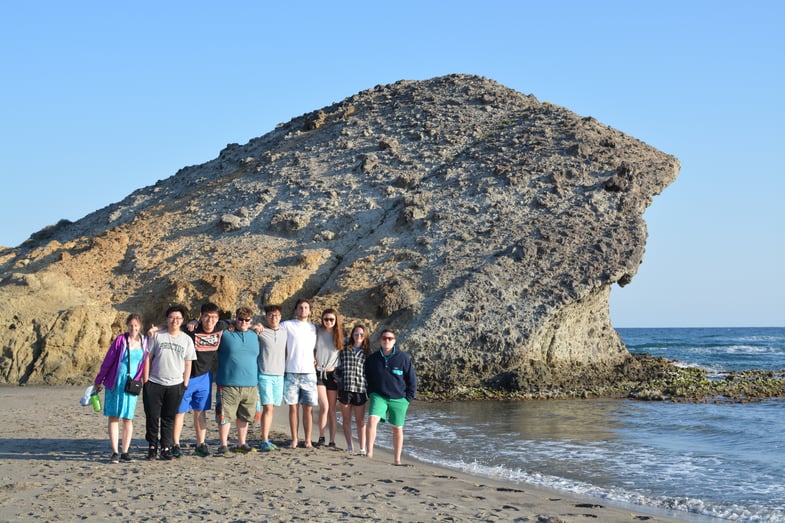 The landmark beach Monsul near San José, Andalucía. The site where a scene from Indiana Jones and The Last Crusade was filmed. Mikaela climbed up to the top of the rock. Other group member were taking an adventure at the back of the rock.

Despite the unexpected hot weather, the group walked to the hostal with excitement. We occupied a whole set of rooms on the third floor, and we also had the access to the balcony, an ideal place to hang out as a group or think alone. We took a walk in the ancient part of Granada, the narrow streets and tight neighborhoods proved that the city was once heavily fortified. Then we started to hike up along the El Realejo, and then finally visited the outstanding Albaicín neighborhood, the former center of medieval Moorish Granada. Standing in front of the new mosque, we peered the La Alhambra on the other side of the hill, exclaiming the beauty of Granada. 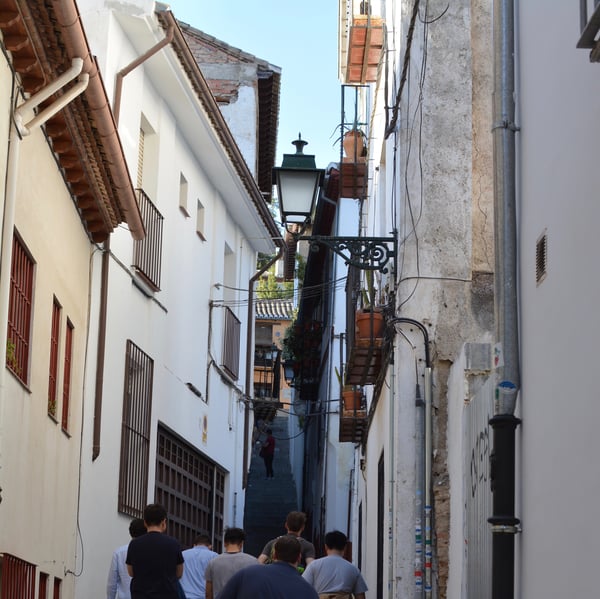 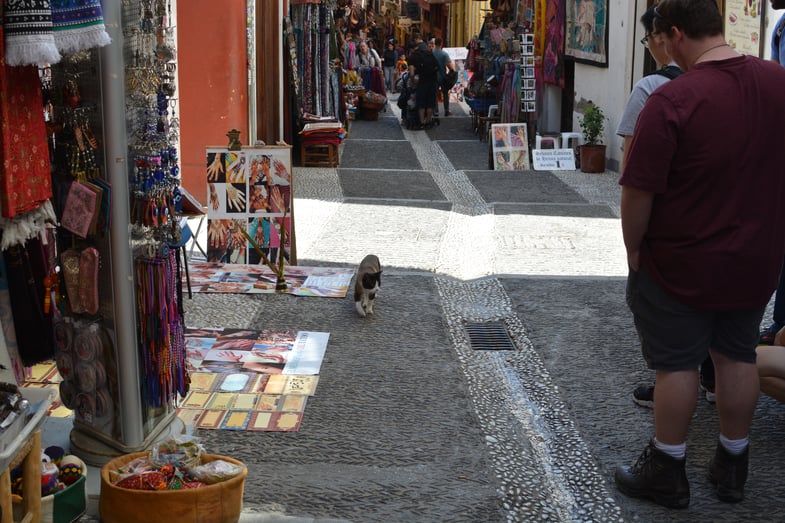 The next morning, we had some tasty desayuno at one of the cafeterias near the hostal. We then walked up to the great Cathedral, the church that was started by King Fernando and Queen Isabel. In the afternoon, we finally got the chance to admire La Alhambra. Built by the Moors, the palace extended along the hill. From the neatly cared plantations to the delicate arabesque carvings on the walls, La Alhambra impressed not only with its spectacular appearance, but also with the fantastic details. We finished our trip in Granada with delicious paella, a Spanish fried rice combined with fresh seafood, vegetables and saffron. 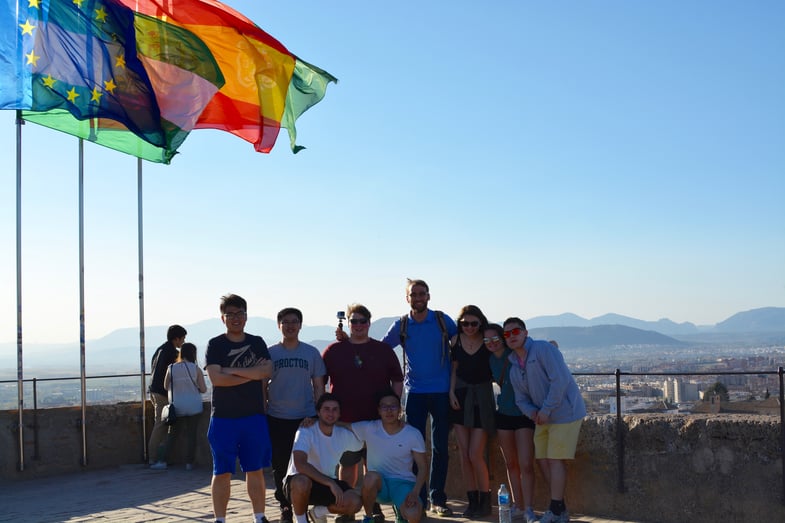 On the top of the Alcazaba (castle) in The Alhambra. We could get a perfect view of the whole city of Granada, a city that was once occupied by the Moors. Peering at the grandiose Sierra Nevada, we were immersed in those past times. 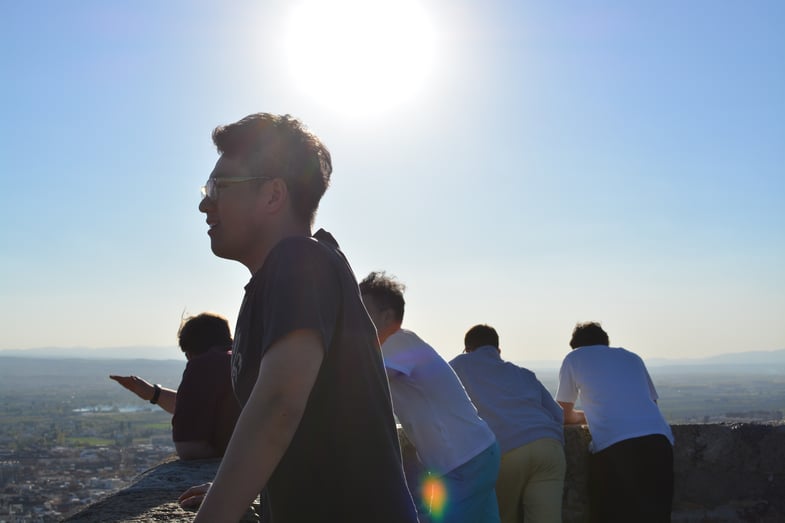 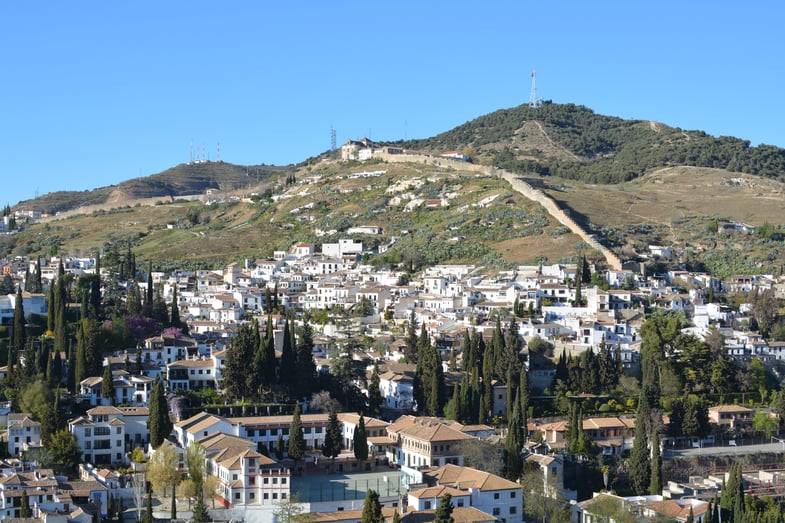 A view of the ancient part of Granada from one of the windows of the prayer room in the Nasrid palace of La Alhambra. Like most of the ancient cities in Europe, all the buildings and courts were settled along the hill. 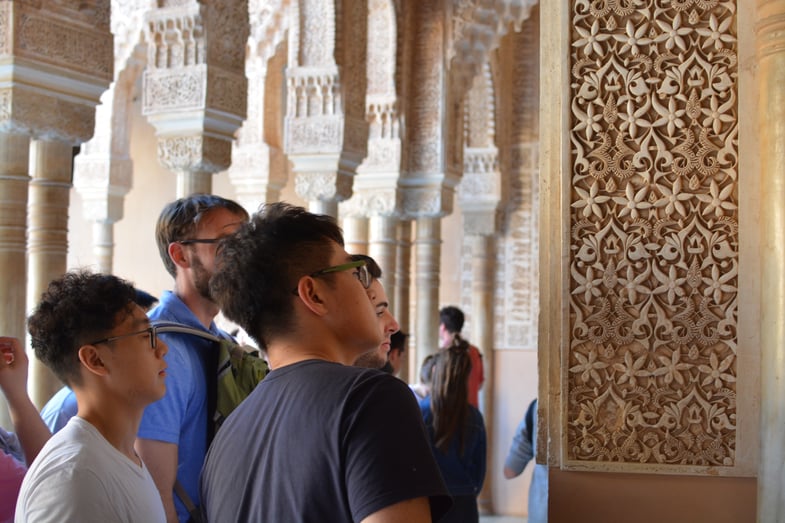 Taking a break during our excursions in the Jewish neighborhood in Granada. Noah and Dennis were about to present on the historical background of this” barrio” to the rest of the group. 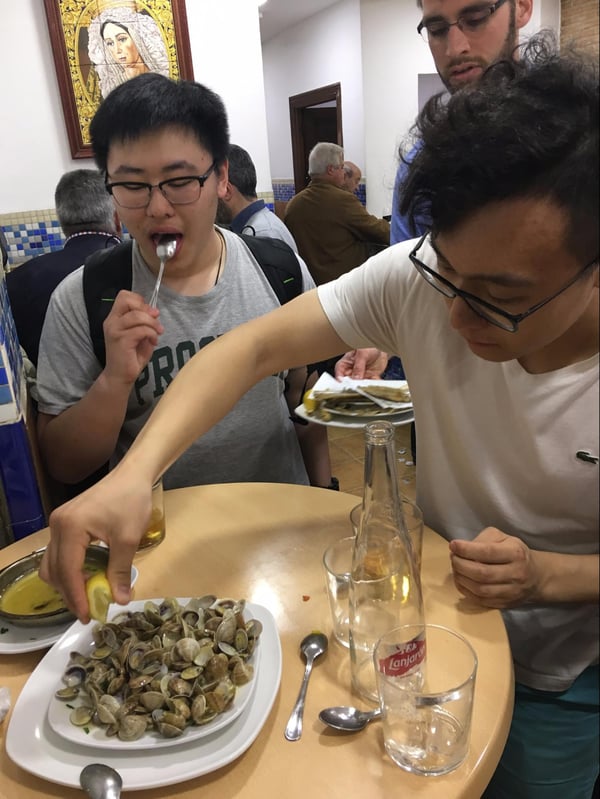 Dennis, Frank, Teddy and Jacob were trying the famous Spanish seafood tapas. We were especially obsessed with the “Gambas Pil Pil” (shrimp) and “Navajas” (razor clams). Tapas were very popular among Spaniards. Customers would walk in, standing around small tables and enjoyed delicious food and drinks. One interesting fact was that customers were supposed to toss the used paper napkins on the ground to show their approval for the chef. On Wednesday morning we left Granada to a small village called Las Negras (in Cabo de Gala National Park in Andalucía’s Almería province). After a two-hour drive, we arrived our amazing house. The house was absolutely stunning to me as the first impression. We had  swimming pool, barbecue grill and a large terrace, which we cannot imagine before we came here. After we dropped the luggage and picked the room, we started our first journey in Las Negras. We went to Playa el Playazo a large beach near Las Negras. Walking along the spectacular coastline of Alboran Sea in Las Negras. The African continent located on the other side of the sea. 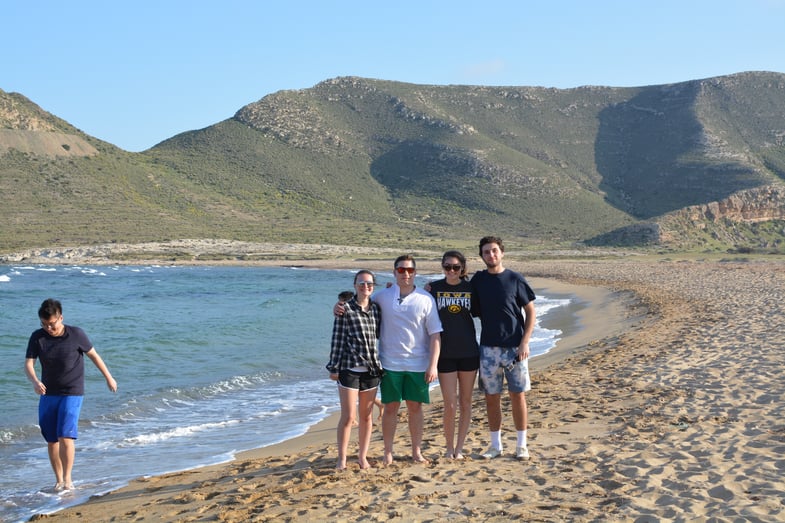 That night is one of the most interesting nights I’ve had in Spain. All the group members hung out in the living room together. After some time-killing card games, we had pasta for the first dinner we had in Las Negras. It is a memorable experience for me to cook dinner with my friends. We cooked some meat, some vegetables and pastas at the second night. It seems that everybody enjoyed the food and the time in our amazing house. 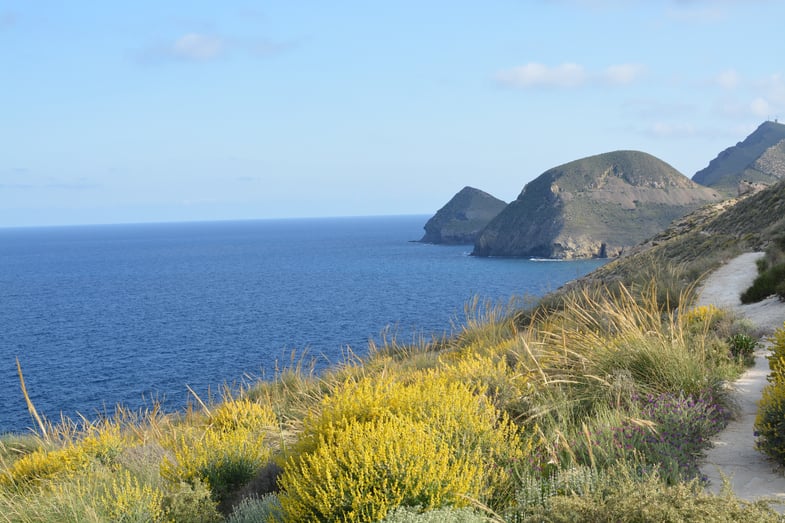 The beautiful scene of the coastline in Las Negras, Andalucía. The azure water reflected the remaining light from the sunset. The zigzagging trail passed through thousands layers of grass.

On Thursday we went to two beaches. The first beach was Cala de Enmedio, a beautiful beach with the sublime view near Agua Amarga. We enjoyed the cool water and the radiant sunshine that afternoon. The second beach is also impressive because of the giant stone on the beach. The American classical movie Indiana Jones was filmed here. Walking along trail on the way to the beach. The trail was long and rocky, we were unprepared for this unexpected challenge. 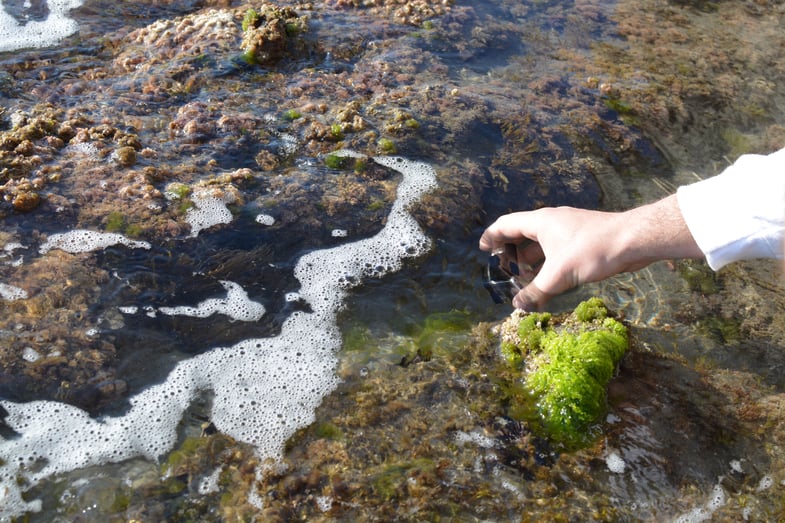 We returned to Segovia on Friday. After a week of travel, this week we are improving our Spanish and enjoying Semana Santa (Easter week)! 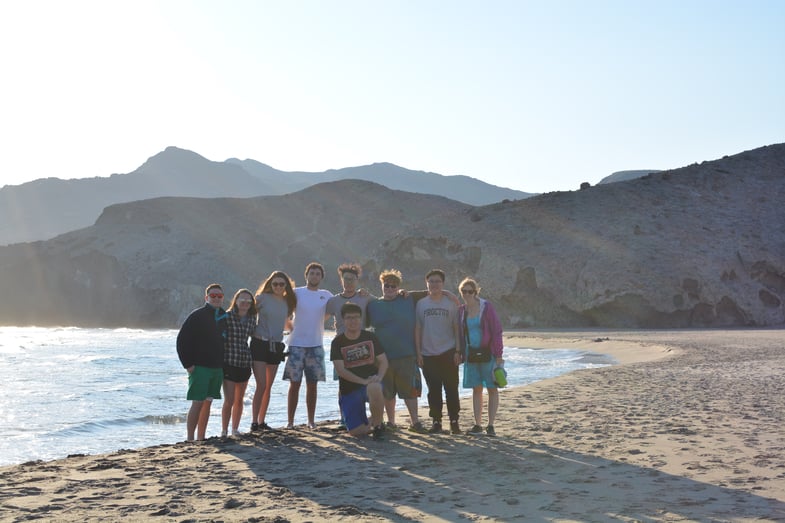