In this final Proctor en Segovia post travel with us to Barcelona, watch a Real Madrid match at Santiago Bernabeú, and, finally to Sevilla and Andalucía’s Costa de la Luz. Enjoy a short film by Gray with student reflections on life in Segovia and footage taken throughout the term. Also contained within are captions by Gray and Sydney, and short pieces of writing by Will, Jaz, and Sydney!

Luke presenting inside Sevilla’s Alcázar (more student writing and photos from our final trip to Andalucía below)!

End of term film by Gray!

During our four days in Barcelona we spent a large amount of time discussing and exploring many different styles of architecture. We admired the Cathedral de Barcelona from afar, surveyed the streets and buildings in the Jewish quarter, and marveled at the sight of Gaudí’s Sagrada Familia Basilica.

The Sagrada Familia’s “nativity facade” in the background. 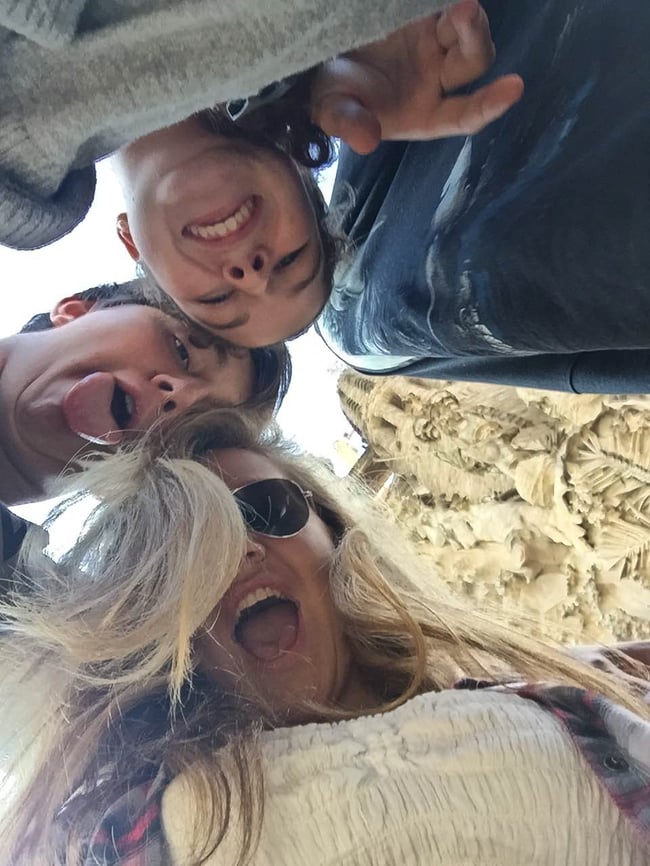 I would argue Gaudí’s work was the most memorable. Gaudí was inspired by the natural beauty of nature which he successfully incorporates into his designs. His use of soft lines and curves to imitate the outdoors creates a unique and light appearance to his work. 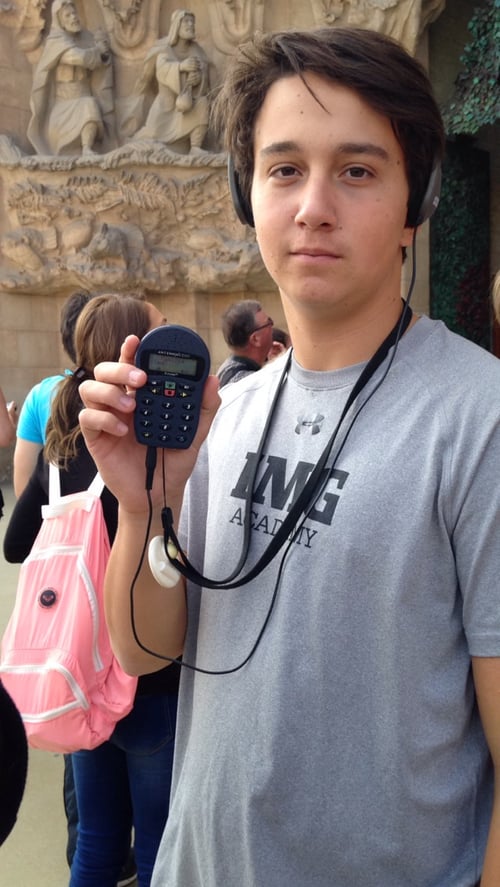 We happily embodied the persona of a cliche tourist while exploring Sagrada Familia Basilica. We walked about the stunning cathedral with an informational audio recording in hand and retro headphones on top of our heads as Luke so kindly models for us above. It’s a shame none of us carried a fanny pack or wore a plastic visor.

We reinforced the skill to navigate using only maps and street signs, something we have been learning to do on each excursion. In other words, we are being taught to get ourselves from point a to point b without the help of a smartphone, a skill which will most likely prove to be helpful in the future. Being asked to navigate for ourselves also keeps everyone involved as we walk down busy sidewalks and old narrow streets to and from each destination.

Ryan brings history class outdoors once again to learn through experience. This time we learned about bombs which were dropped on the Plaça de Sant Felip Neri in January of 1938. In the photo above you can see large blemishes remain on the exterior of the buildings from shrapnel spread by the bombs. The explosion killed 42 people, most of whom were children. This was hard for me to imagine, given that the placa was now filled with boisterous kids.

For English class everyone is keeping a journal to document our trip. It has proven to be a wonderful place for us all to work on creative and descriptive writing. This photo is of Mikaela’s journal. 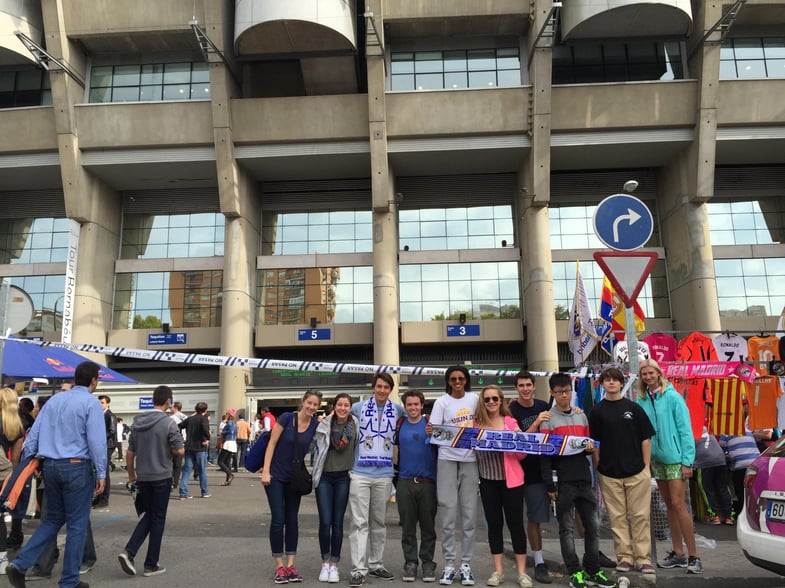 The ball blasts through the air like a shooting star, going directly into the net. As the ball comes to a complete stop against the net of the goal, the crowd erupts. Real Madrid has just scored their third goal of the game, and the stadium shakes in excitement. As I glance through the crowd an older man catches my eye. He looks as if he is in his mid sixties, yet he jumps up and down with excitement, celebrating the goal. He waves his hands up in the air both of them holding onto a Real Madrid scarf that waves back and forth in the air as he celebrates. As he sits down his friends greet him with high fives and faces of excitement. Soon the smile he once had begins to fade as soon as the opposing team kicks the ball at the Real Madrid goal, but the goalie saves it. As he watches the plays unravel on the field, the wrinkles on his face move with each expression. Each wrinkle tells a different story and outcome of every Real Madrid game he has seen. He nervously begins to chew and spit sunflower seeds, coping with his anxiety as the game slowly comes to an end. The game dwindles to an end with Real Madrid winning, and the man leaves the stadium with an ear-to-ear grin. 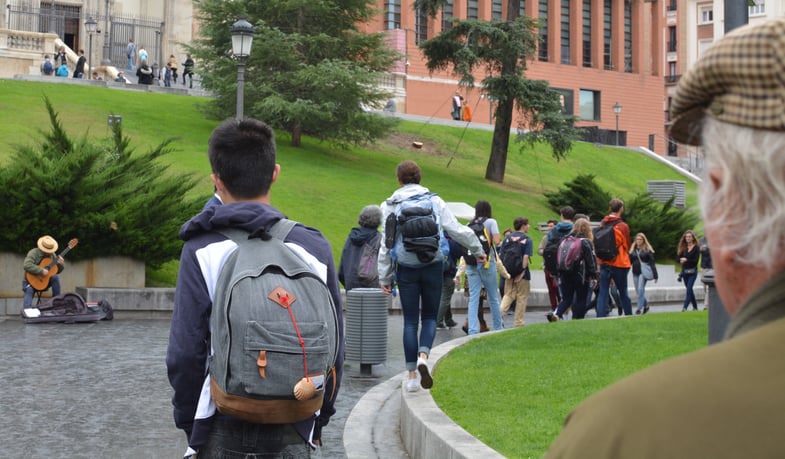 Vincente, Camino de Santiago shell still on his pack, walks to the entrance of the Museo Nacional del Prado! 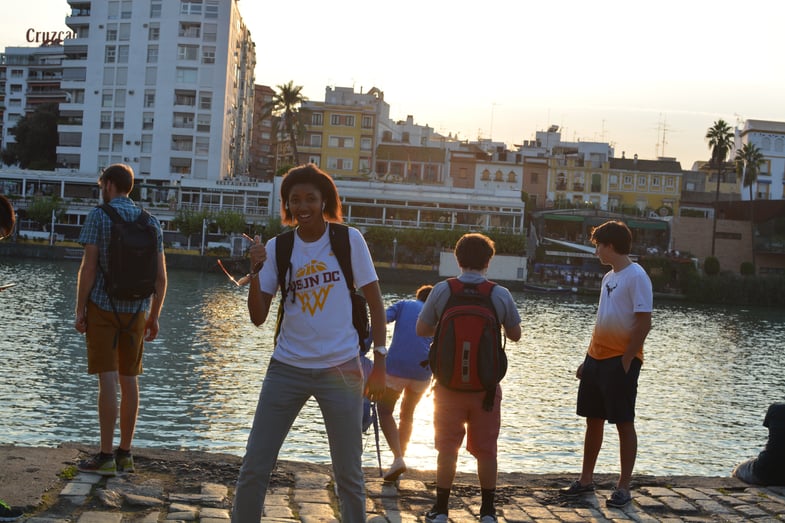 The Guadalquivir river with the Triana neighborhood on the left bank.

Catedral of Sevilla and La Giralda (now a bell tower, formerly the minaret of the Mezquita Mayor)

Bullfighting culture is alive and well, at least in Sevilla. 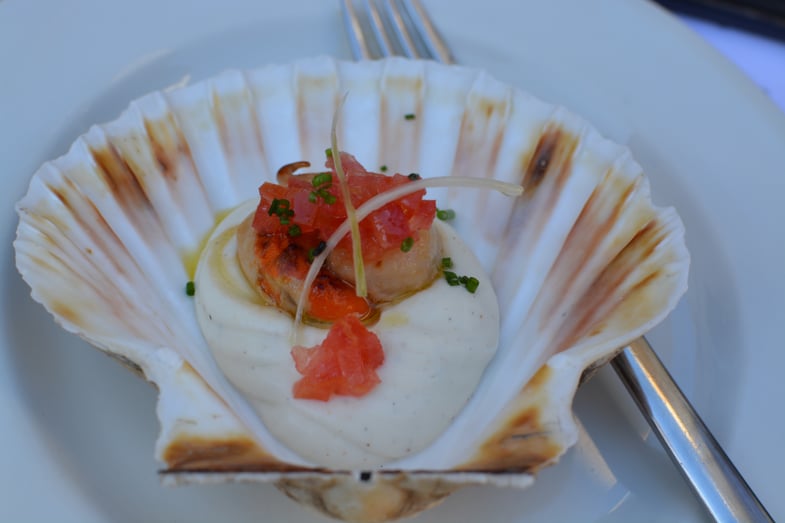 I think most would agree that Sevilla’s tapas were among the best and most creative that we’ve sampled!

Arriving at our casa rural in the Bétis countryside (a tiny, tiny town near Tarifa). The faint outline of a mountain in the distance is Morocco!

Of all the things I’ve learned on this trip, one thing I have confidently arrived on is that the eagle is my spirit animal. Some weeks ago in Nava, which now feels like an eternity, I innocently purchased a t-shirt. Now this was no ordinary t-shirt, but rather a majestically compiled collage of nature, color and freedom crammed into fabric. An eagle, with two eagle friends, staring off into the distance. I have grown fond of this shirt and have sported it during few adventures, most recently, in Bétis, a town so small they are proud of their six shiny new streetlights. Although the town is small, the cliff looming behind it is the polar opposite. When we arrived at the house and discovered our precious wifi was gone, Will, Gray, Luke and I decide it was time for an adventure. So we left the comfort of the house and went into the cold, damp, Bétis wilderness. Unknowing of what was to come, we marched confidently up the hill towards the rocky cliff. After about a half hour, we reached the challenge, a field of slick, wet rocks with nothing but thorns in between them, stretching about a three-hundred foot gap between us and the cliff.

Glancing down, I remember my shirt, and how the eagles on them would not back down from such a challenge. It gives me the inspiration I need and we push forward. I then find a stick, perfect for bashing encroaching thorn bushes. It helps us out of some tricky situations and we keep pushing onward. I slip on a particularly wet rock, scraping my stomach and legs on the thorns I land on. Hurt and discouraged I know that even an eagle with an clipped wing will search for mice to feast on, so we move farther. At some point Will tells us all to be quiet, that he thinks he heard some bells, and that they could be goats. Sure enough, about one hundred feet ahead I see a pack of mountain goats making the climb look like a walk to the corner store. The prospect of playing with goats is enticing, so we set off, basically running at this point, to catch up with the herd. We eventually reach them, and, at this point I am content with the adventure and happy to be up high, above the house and the town. After playing with the goats, they turn around, signaling to use that the day is coming to an end and the night will be arriving. So realizing they probably know more about the hillside than we do, we decide to follow their path down.

But as we got closer to the bottom, the sun got closer to the horizon. Before we knew it, we were walking in pitch black, and our goat friends had left us. I then saw my shirt glowing in the dark. As the three eagle heads were one of the few lights I saw, I realized that I have a love of adventure, and even when the lights go out, I can still shine and have a good time. I decided then that, even when I took the shirt off, the eagle, my sense of adventure would always be inside me. So when we got lost, muddy and scared that night, I was also excited and having a good time. I think everyone should try to find their spirit animal and what that animal represents for them. Being in tune with the inner self is important. Sometimes a t-shirt can help discover that importance.

Ryan thinks he has found his spirit animal, a horse that kept showing up at our front door! 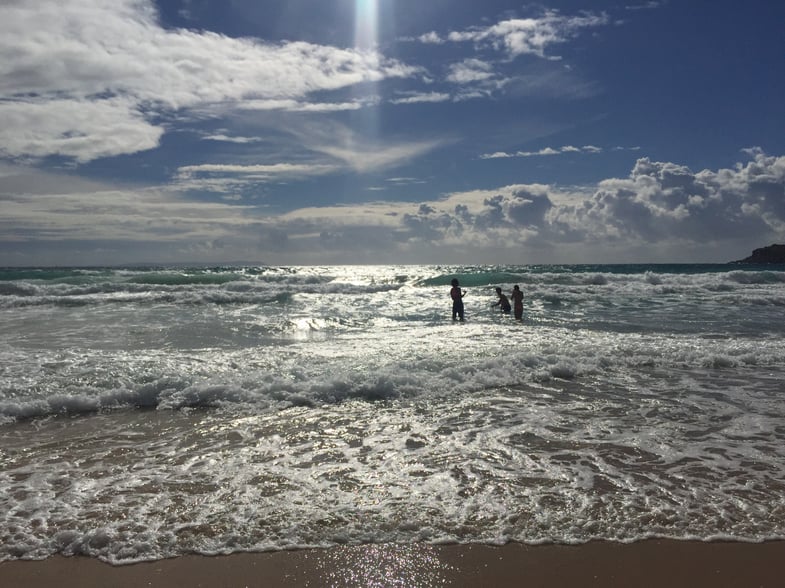 The beach at Bolonia, near our casa. (Photo credit: Vincent Luo)

The Strait of Gibraltar with Morocco and Ceuta in the distance.

As I applied for Proctor en Segovia I pictured a place where mariachi bands stand on every corner and flamenco dancers scatter the streets. I envisioned a town centered around a bull fighting arena, and yet, I imagined this city to resemble Paris. I have since realized that I could not have been more wrong. My idea of Segovia was beyond naive, it was downright absurd. Upon arriving in this beautiful city, just over two months ago, I never thought the mere idea of leaving this magical place behind would be so devastating.

While abroad, I have learned to value time in an entirely redefined way. Time is fleeting, and, although I knew this two months ago, I didn't realize how fleeting. I feel as though I just arrived here and now I am leaving in less than forty eight hours. I sit in the living room watching my host brothers wrestle, and I am terrified and heart broken by the idea this might be one of the last moments I spend with them. This family has been an essential component to my trip and I am so thankful to have had the chance to know them. They way they accepted me into their home is inspiring, and I know I will never forget them.

Most shocking though is the way we figured out how to connect and communicate with few words. The process has been challenging at times, but has also proven to be incredibly powerful. I have had to figure out who these people are based on pictures and actions, and I am amazed by how much I have been able to learn. There is the old saying, “actions speak louder than words,” and in this case actions have been my words. It is as if the past two months of my life has been one big game of charades, and, like any good game, I am not ready for it to end. 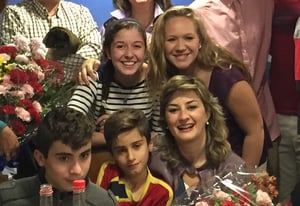