Proctor en Segovia: This Is Our Town, Featuring Los Padres

Our first trip to Madrid was a success! An eventful day of history lessons, fútbol games, bus rides, and lots of laughs. The day began mid-morning when the group met at the bus station where we were greeted by Ryan and Laura. We discussed the itinerary and the game plan for our excursion. We had an action-packed day ahead of us. The whole group was so excited we could barely sit still for the hour-long bus ride from Segovia to Madrid. When we arrived we were instantly introduced to the long confusing metro system. Julia ‘21 and Ollie ‘21 were in charge of navigating our paths to get to the center of town. Through the process of elimination, we successfully arrived! 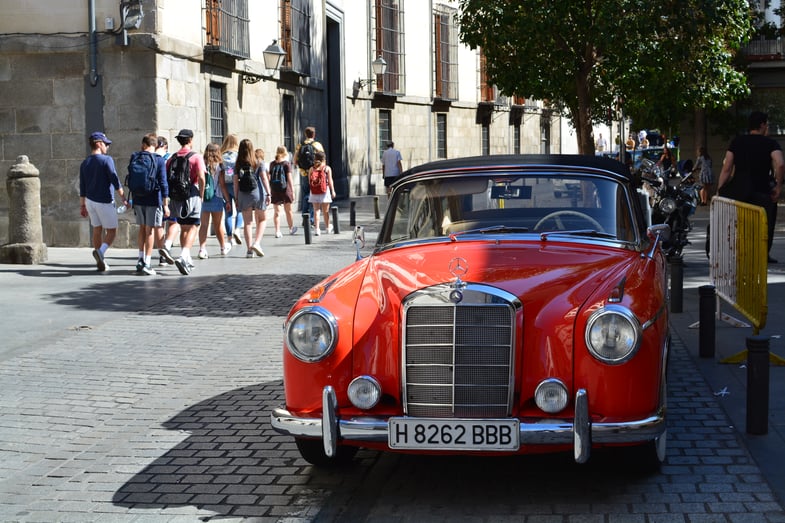 We found some park benches and ate the delicious bocadillos (sandwiches) our host mothers had made for us! After that, we walked around through the oldest barrio of the city (called either Madrid Centro or Madrid de los Austrias or “Hapsburg Madrid”). We went to visit the exterior of the Palacio Real (royal palace) with Ryan where we learned about Philip the 5th, the first Bourbón (French) monarch of Spain. We then saw remnants of the Moorish wall. Madrid was originally founded by the Muslim Emir of Córdoba as a military encampment and castle in the 9th century. After a few more lessons as we walked, we were given the opportunity to go explore the city on our own. It was a great opportunity to check out some shops and grab a café con leche! 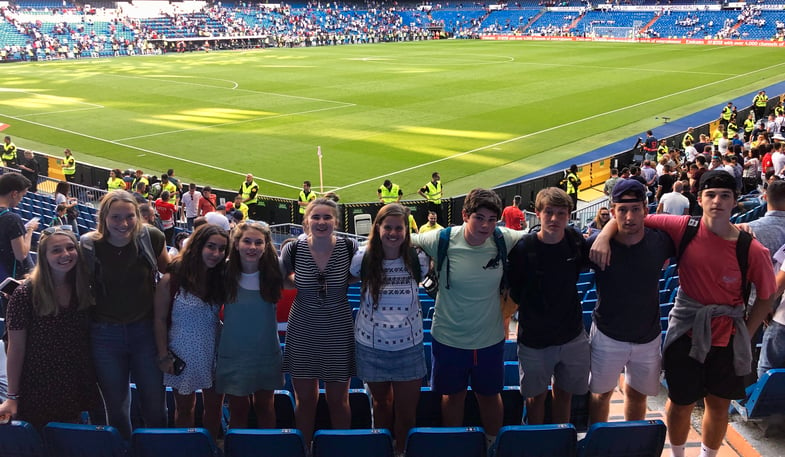 Later on, after the match, the gang headed back down into the metro to get to the Callao metro stop (and Gran Vía area) for more shopping and exploring. The city was very crowded and lots was going on but we had a blast checking it out! So many unique shops and live music everywhere we went. This part of the city had a very Boston/New York vibe except for the Spanish being spoken all around us of course. When we reunited the group for dinner, there was a big debate if we should get Five Guys burgers or burritos for dinner. We decided to divide and conquer. Both places were just what we needed to refuel ourselves after the long, hot day. Burritos, of course, was the superior meal. We then had to reconnect and find the bus station which was about a ten-minute walk through the city. To say the least, we were all exhausted. The day had been so action-packed that most of us got a little snooze in before arriving back home in Segovia. The feeling of excitement to pull back into our familiar little town is unexplainable. I was excited to return home to my host parents to tell them about my day. Each day that passes Segovia begins to feel more and more like home. I cannot believe how fast time is flying by. So much more to look forward to including two more weekends in Madrid! 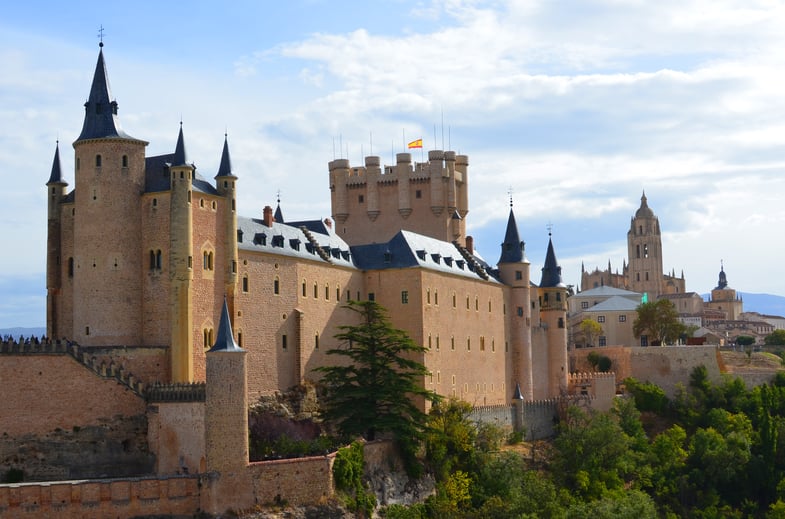 Family weekend in Segovia started out strong. Most families had flown into Madrid the day before and were just arriving in Segovia via train. Both Spanish classes had a tapas presentation planned along with an assortment of foods like tortilla de patata, aceitunas (olives), and jamón. As the tapas were passed around, we were able to both show off some español and introduce the parents to some of the Segovian culture we have been immersed in for the past 4 weeks. After most of the prepared food had been consumed and everyone was wondering how we were supposed to now eat lunch with our host families, the group split from some more comida and a well-deserved siesta from around 3 to 5. After that, we continued on to our afternoon activities which consisted of photography, basketball, tennis, and gym. Most visiting parents took this as a perfect time for a nap before dinner. Around 9 is when dinner in Spain starts so visiting parents were able to meet back up with their kids for a casual meal while the remaining group (along with Ryan, Mikaela, and Lucia of course) decided to go to a favorite authentic Italian restaurant where the pizza and pasta is unmatched. Everyone had an early night for Spanish standards on this Friday as we geared up for a history walk guided by Ryan on the outskirts of Segovia at 11 am. 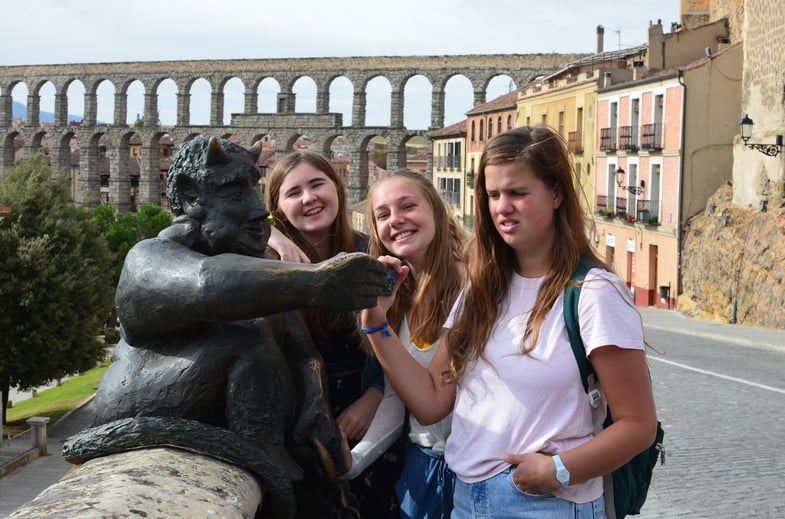 Navigating the streets of Segovia on Saturday ended up being quite an accomplishment as it turned out to also be Spanish National Day, guaranteeing parents got the full cultural experience. After a nice guided tour, everyone met up to board a shuttle bus for a 40 minute drive to the town of Pedraza. Surrounded by walls, the medieval town only has one entrance/exit so entering on foot was the only option. At this point, it was nearing lunchtime and everyone was ready for a locally prepared, multi-course meal. The largest group we have had this trip filed up the stairs and around a very rectangular table. Appetizers started to come out starting with bread and olive oil, croquetas, cod-stuffed peppers, and jamón con queso. There had been three options for the main course which had to be taken days before because two of them took up to six hours to prepare. Most people chose lamb, others picked suckling pig or fish. Dessert wasn’t even a question and a typical Segovian layered cake was on the menu for us. 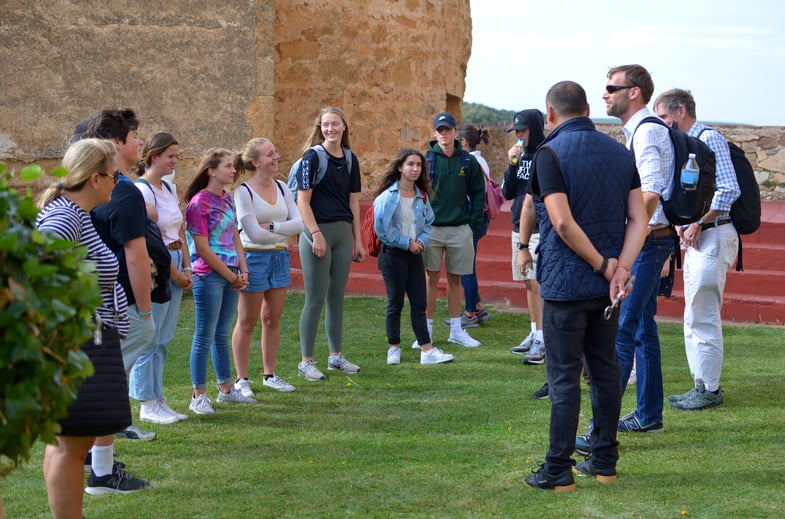 While the cake got mixed reviews there was very few leftovers, so with full stomachs, we made our way down the cobblestone street heading for the castle of Pedraza which was once used by the Castilian military. Now owned by the 80-year-old granddaughter of the famous Spanish painter, Ignacio Zuloaga, the castle was on the smaller side but was nevertheless charming. Surrounded by amazing views and well-manicured lawns, this castle was a favorite for many. With a personal tour, we were lead through the grounds, allowed to climb up on the walls once used for look-outs, and even allowed to go underground to a stone chamber that was used as a natural ice-box before refrigerators. Content with our sneak-peek into the town, we took our time to check out the Plaza Mayor, or the central square, of Pedraza and slowly make our way to the exit of the town.

Once back to Segovia, it was time for a post excursion siesta, giving everyone enough time to make family dinner plans or just take some downtime. More families had joined us on Saturday so it was even a smaller group of students joining Ryan and Mikaela for a small, intimate group dinner. After a long day of good food and beautiful castles, everyone made their way home or back to their hotels after some late-night exploring of Segovia. With few plans for Sunday, parents were able to take advantage of going out to wander the twists and turns of the Segovian streets rested and less jet-lagged. With an optional lunch with the host family, some students hung out at home and some decided to venture out for a pastry and cafe con leche with friends. With an open gym at 4 and study hall at 5:30, the last day of the family weekend in Segovia came to a close. With lots of laughs having been shared, our schedules will go back to normal as an excursion to Barcelona is coming up this week! 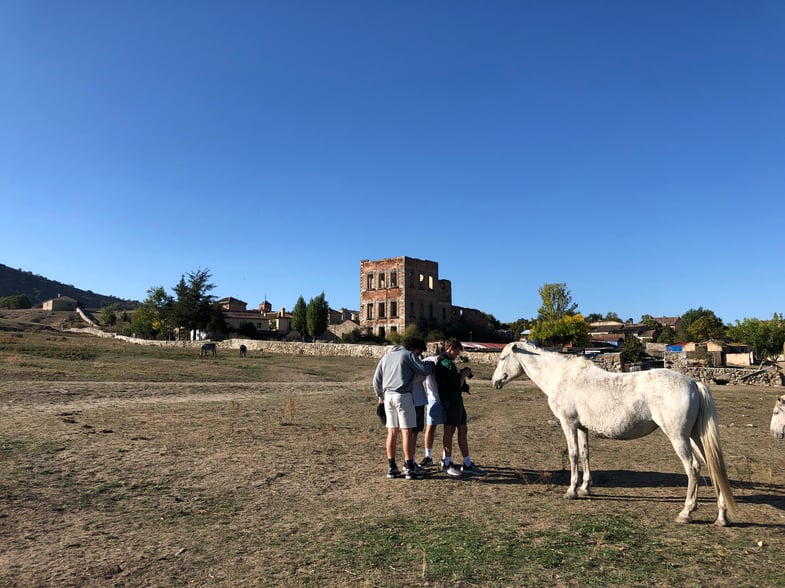 Images from a photography (afternoon activity) trip to the small town of Valsaín, 15 km outside of Segovia).