We got off the high speed train in Valencia to be greeted by an array of alluring billboards. We then press on to the hostal where we unload all of our belongings. After brainstorming for awhile we collectively decided to go to the beach for an hour or two before dinner. The beaches skyline was littered with a plethora of kites and floats. Kevin and Drew were the only ones daring enough to set foot in the frigid waters. 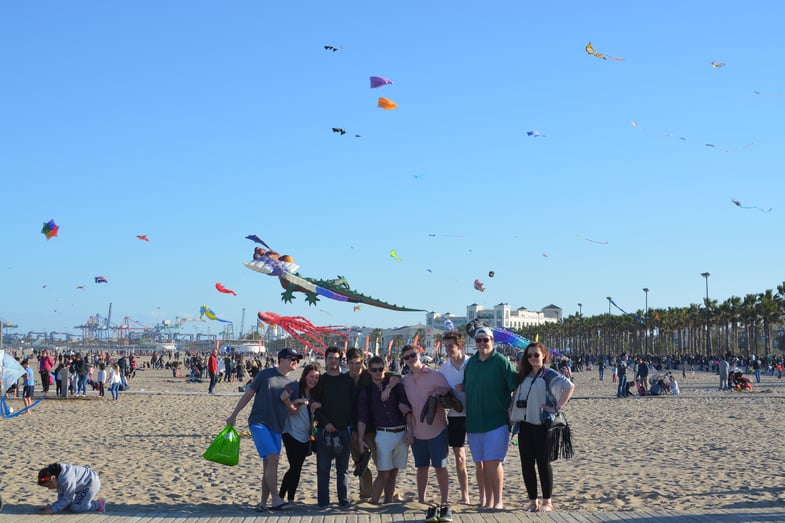 The majority of us sat on the beach and enjoyed the sunset. After letting Drew and Kevin get dressed we all took the train back to our hostal and left Ryan and Mikaela to sort out dinner. They were able to find a little burger joint that was able to seat all of us. Every one at the table got the a hamburger with lettuce and tomato with a fried egg on top. After a dinner we all walked back to the hostal with a sense of satisfaction from our dinner and then proceed to pass out. 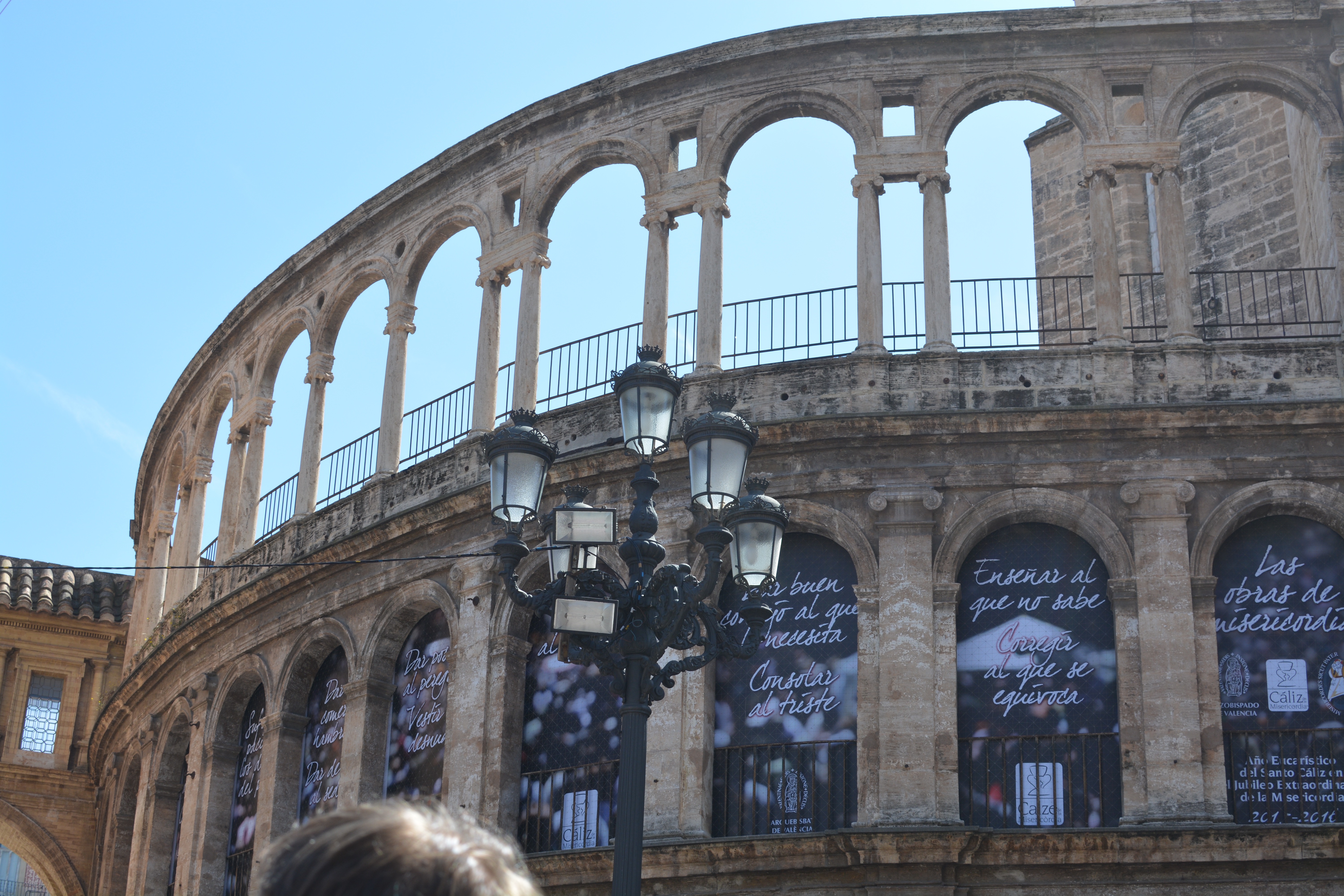 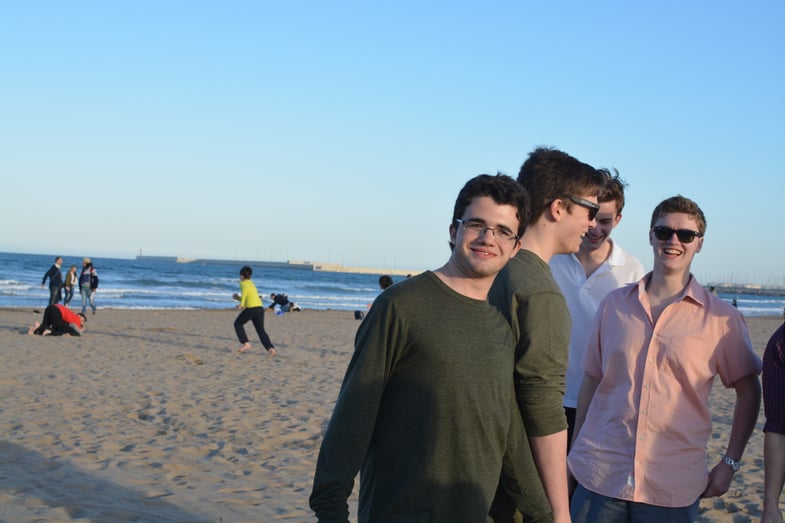 The next morning we got food in coffee from a café that was close to the hostal. Then went to the top of the Valencia Cathedral to receive a history lesson from Ryan. When the lesson concluded we all admired the staggering view of Valencia. The walk down the stairs was a challenge for most of us. With every step we ran the risk of plummeting down multiple floors of the spiral staircase but luckily none of us did. We went back to the hostal to plan our video blog of a major monument in Valencia. Kevin, Drew and I decided it would be fun to go visit the museum of fine arts in Valencia. We walked trough the museum while filming our experience. We saw painting of many past Spanish leaders, depictions of biblical figures and we were even lucky enough to see some of the works of Francisco Goya. We finished filming and then made our way to the paella place for dinner. For many of us it was our first time trying paella andmost everyone enjoyed it. We got back to the hostal early because we needed to leave for Xàbia in the morning. At the top of the Cathedral of Valencia's bell tower. 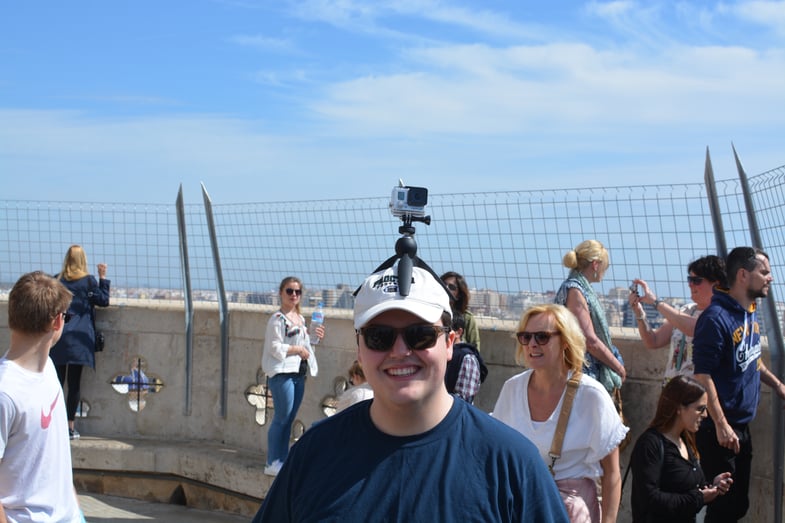 Our visit coincided with the celebration in honor of once of Valencia’s patron saints, San Vicente Ferrer. 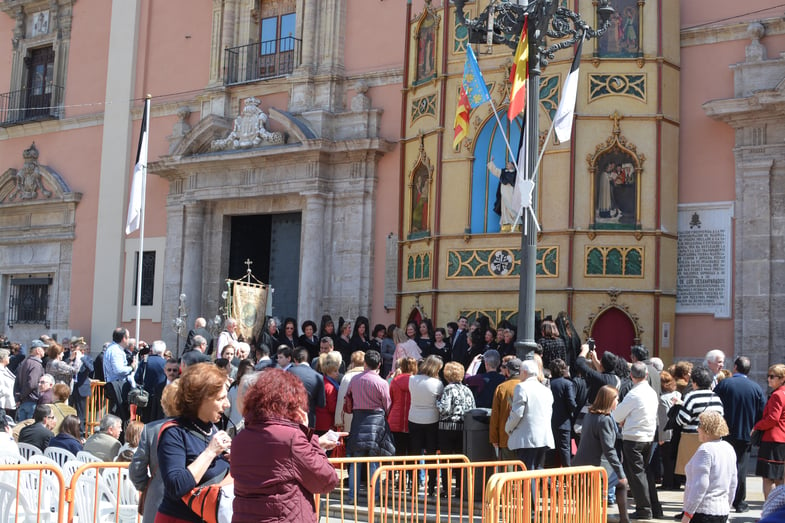 On the Sunday and Monday one week after Easter, the church bells chime throughout the morning and Valencians, in traditional dress, participate in processions throughout the old quarter.

As we packed our bags to leave Valencia we were excited for the trip that lay ahead. So we stuffed our bags into the back of a semi-totaled Ford Focus and departed. Getting out of the city was quite easy. Then we were in the beautiful Spanish countryside. Both cars bonded quite quickly and had a good time on the ride up. While trying to keep up with race car driver Ryan we got lost a few times, but it was all in good fun. As we got further out of the city the scenery was incredible. We arrived at one of our stops along the way, a castle up in the mountains above the town of Xàtiva. It was like something out of a movie. We walked up the road to the door of this ancient site. As we approached the door there were many lookouts to explore. The group had a good time looking at the ancient ruins of the Moorish castle. We then ding dong ditched the castle and began our decent. 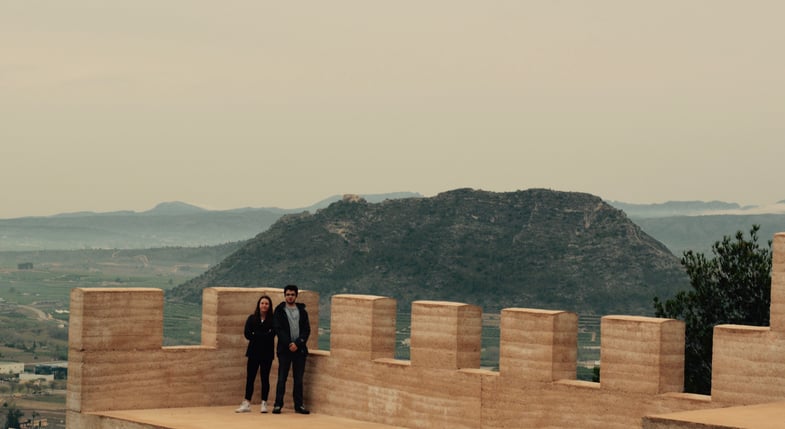 High above the city of Xàtiva exploring the (restored) fortress and castle ramparts and watchtowers. 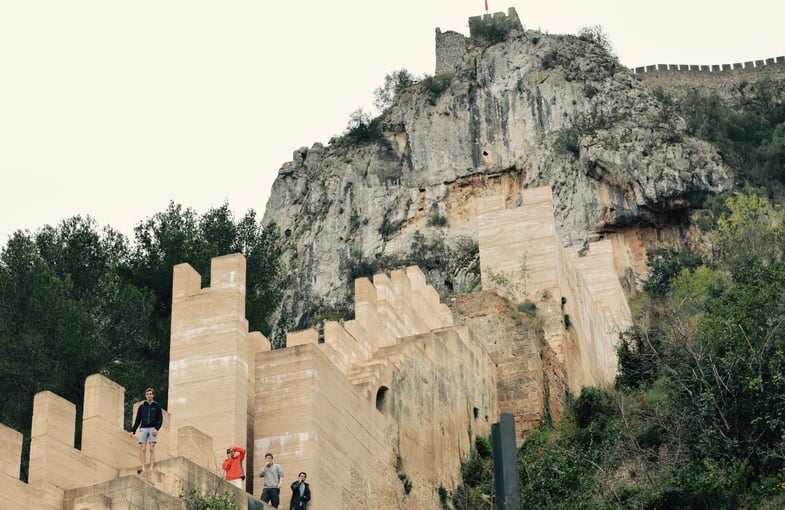 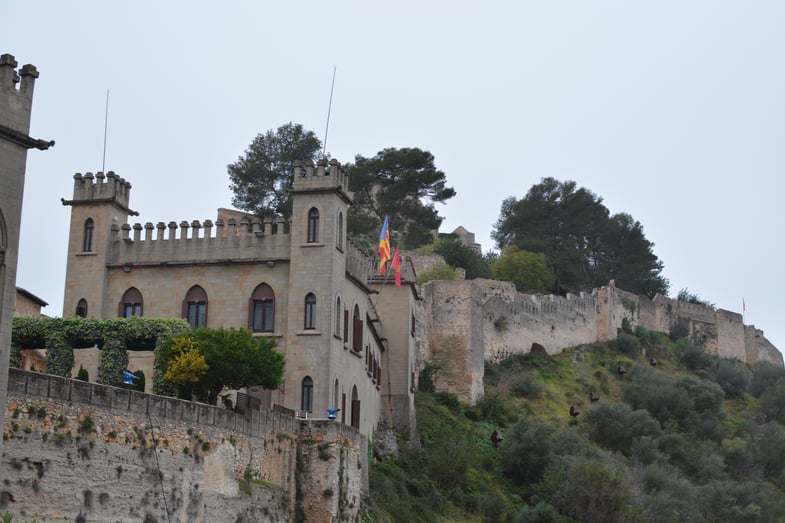 The view was amazing as we went down the switchback road to the bottom. Once there, we got into our cars and left. Now on the road again the need for food and a bathroom came over some members of our group. So we stopped at a bakery in town (a chain we know from Segovia) and got a quick bite. Night fell upon us as we crammed ourselves back into our German and American automobiles. The group proceeded on into the Spanish countryside, which we soon learned was littered with orange groves. Then only 12 Taylor Swift songs later we reached the town of Xàbia. 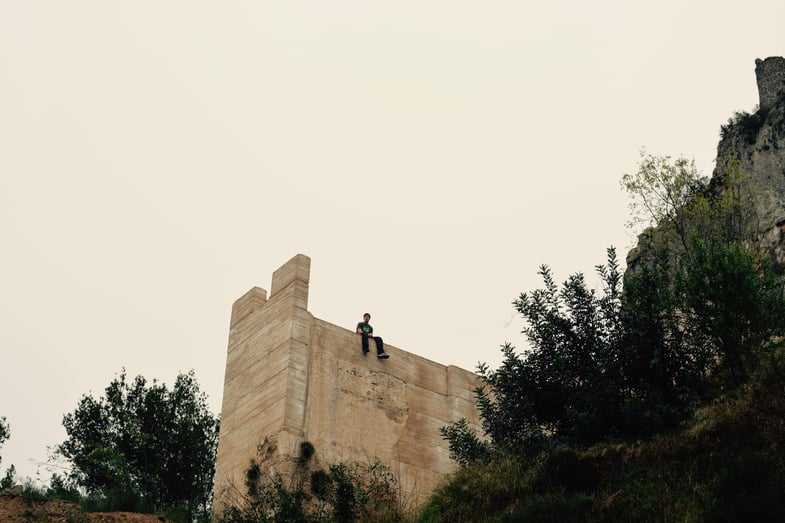 Xàbia is a small coastal metropolis (not really) on the coast of Spain. Many members of the group were hungry so we sat down and ate. The food was very good. Everyone slept well that night to the gentle sound of the ocean. 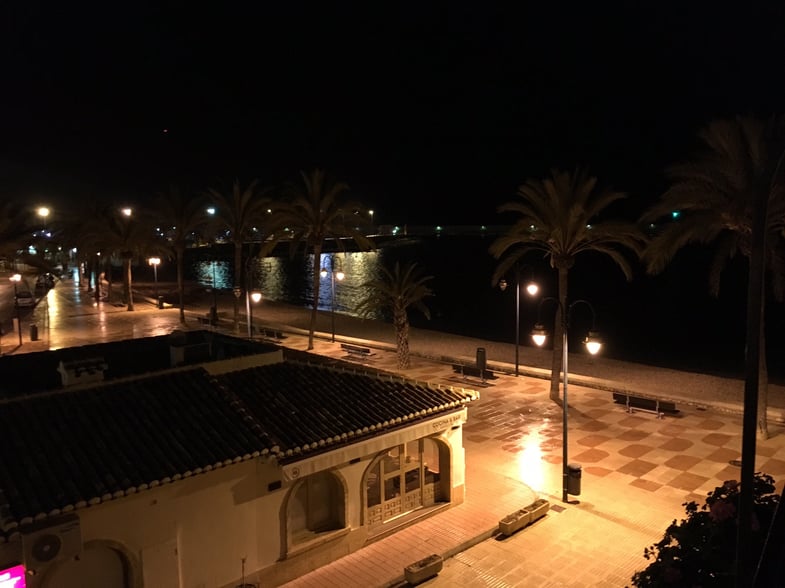 In the morning, we were off to yet another castle town only an hour away. The terrain was quite mountainous and the views were spectacular. 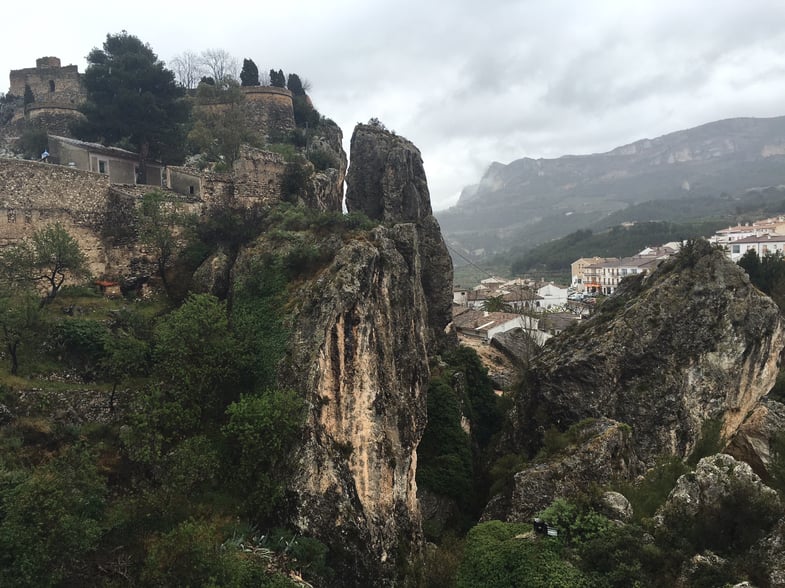 The town of and medieval castle of Guadalest is carved into the mountains that surround it. (Photo credit: Nathaniel Perkins)

We had our history class at the top of the castle. We learned not only about this castle but also why there are so many like it in this part of Spain. As we began the short descent I already started to miss this place. It had some of the most amazing terrain I have seen since a personal trip I made to Switzerland. The town was one of my favorites and I consider going back. We then stopped to pet some cats and then were back on the road to the hotel. That night was calm and everyone slept well. We had an early start in the morning to head back to Segovia. We left this amazing location that no other Proctor en Segovia trip (that Ryan and Mikaela know of) has visited before, blown away by the amazing views and food. I hope they bring more groups to Xàbia in the future. It is a truly is a magical region. 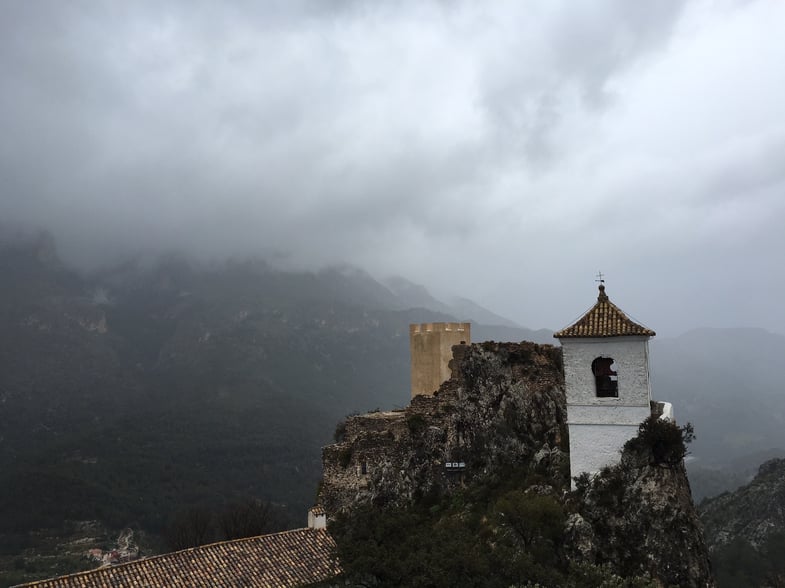 Of Moorish origins, the town was “reconquered” by the Kingdom of Aragón in the 13th century. 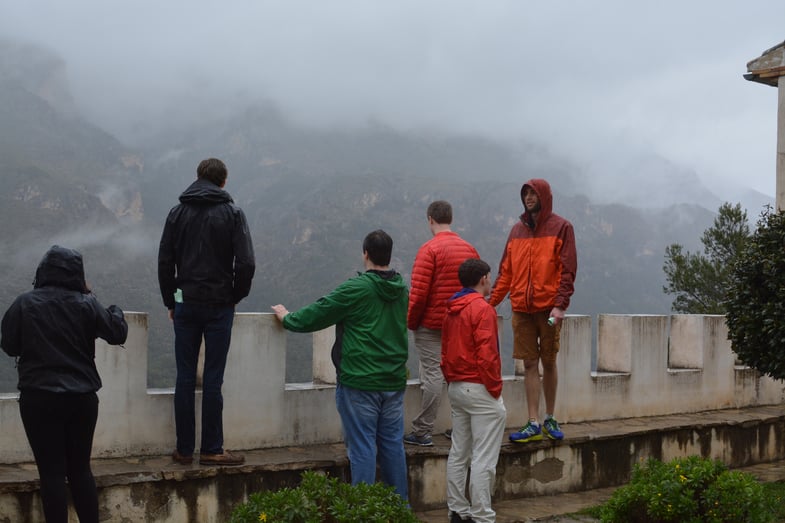 Reservoir that feeds orange and other citrus groves in the valley below. 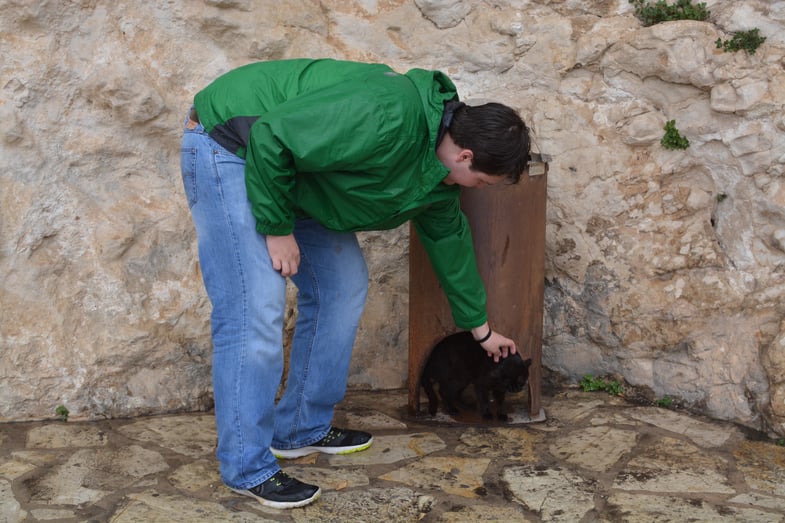