Academic Lens: Be The Watershed by Grace '16

Grace Hovem '16 shares her writing, photography, and video editting skills in this blog post she submitted for her AP Environmental Science course. Enjoy!

Friday was a beautiful gray day—a perfect day for a field trip. This was a field trip consisting of three locations, cold feet, and cameos by notable singer/songwriters as well as salamanders. 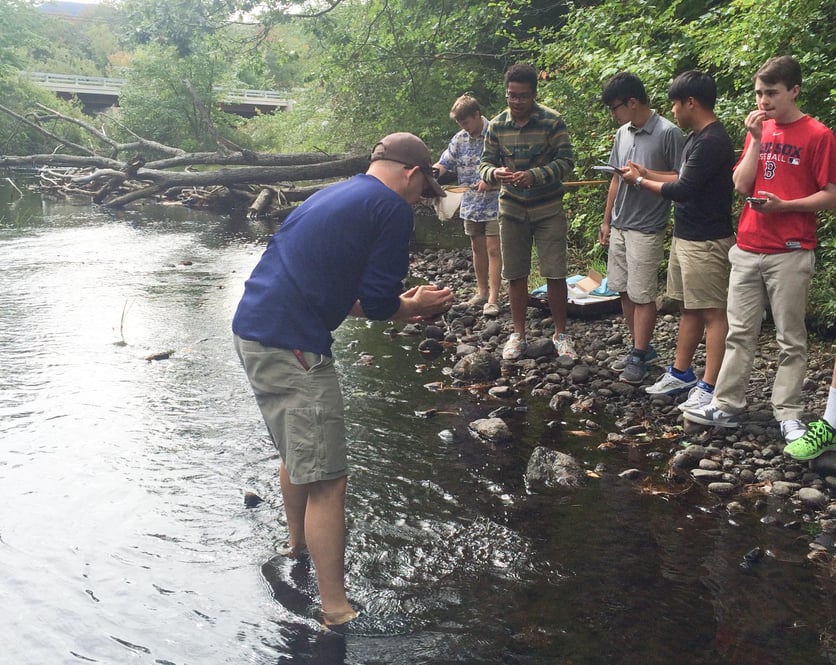 The mission of this trek was to “think like a water shed.” We were looking at the Blackwater watershed, which is a part of the Merrimack Valley watershed. A watershed refers to how water collects and flows and runs into the ocean. (In two sentences I’ve already said “watershed” four times.) Ours was created when the glacier that covered New Hampshire in mile high ice 10,000 to 12,000 years ago began to recede. This created the valleys and notches of New Hampshire we know today, it is also why New Hampshire is the granite state, has little topsoil, and still has some shifting and minor earthquakes.

The first leg of our journey was to the Blackwater River on the rail trail. Our arrival was celebrated by the cawing of crows, which Alan happily noted signified the B for Biotic in our A,B,C,D,E,E’s of environmental science. The second thing that Alan noted was that the water level is low. Water levels will rise and fall regardless of rainfall depending if the trees are growing new leaves or shedding their old, but since the trees are losing their leaves, we should be seeing a rise in the water level.

After arrival we began taking data, using both manual and electronic methods. The air temperature measured 57.1 degrees Fahrenheit (via electronic temperature probe), and the water temperature 13.9 degrees Celsius, or 57.2 Fahrenheit (via Alan’s device.) The dissolved oxygen measured at 7 mg/L. There is more dissolved oxygen in cold water because cold water can hold more gasses, in this case oxygen, and is less saturated. Knowing that, I can make the assumption that cold water also better holds greenhouse gasses like carbon dioxide and methane, which is why melting ice caps is such a huge problem.

Next we measured pH, which measures how acidic or alkaline something is. The manual kit said it was about 7, which is neutral. The electronic reader measured the pH to be 6.4, which is slightly acidic. This doesn’t surprise me because surrounding the river are pine trees, which from forestry class, I have learned live in sandy acidic soils and that they propagate the soil acidity.

We also measured turbidity, which was 0 jtu (Jackson Turbidity Units). This measures the amount of suspended particles in a solution, basically how clear the water is. This is important because it’s an indicator of how much light the river gets. Our site, however, though 0 jtu, is still not getting a lot of light due to tree cover.

So, if the water is clear according to the Jackson Turbidity Units, then why does the river have that yellow tint? Well, I’m glad you asked. The thing that makes tea tea-colored is tannin, and tannins are a natural occurring polyphenol (a really complicated structure of carbon, oxygen, and hydrogen) that make of 50% of dry weight in plant leaves. This includes pine needles; so when pine needles fall into the river they turn the water a tea color (learn more here).

Some more “B for Biotics” we saw at this site are the black algae covering the rocks, from which Blackwater gets its name, a dragonfly nymph (the teenage stage of a dragonfly), and some other insects casings, such as the stonefly. 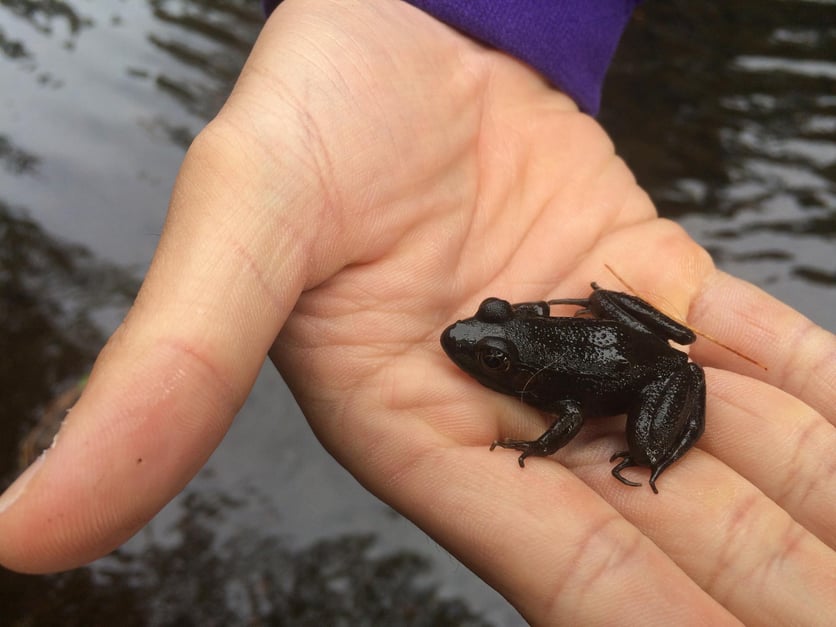 Then we moved upstream towards the headwater, onto Site Two, the Eagle Pond Tributary. Here we collected some data, looked at different wildlife, and the examined the implications of humans interacting with nature’s ecosystems.

The water temperature was 62.3 F and the air temperature 59.2 F. We also found the pH was a neutral 7, using the non-electronic kit.

This site was wider, shallow, with more rocks and receiving more sun. This and the fast moving water meant that the water was warmer. More sunlight also does a lot for the vegetation of the area. Alan McIntyre said, “I see grasses under the water here, so there is enough sun to photosynthesize, more light energy for growing.”

Here we saw some more stonefly casings. This is actually very important because stoneflies are an indicator species, which means they are a species that can give us insight into the characteristics of the site. In the case of stoneflies, if we didn’t find them here we would know that the site is unhealthy. We also found a frog, a clam, and I found a salamander as we were leaving, my proudest life accomplishment to date. I was able to identify it as a Northern Two-Lined salamander with the help of the New Hampshire fish and game website.

At this site we could also see that the river runs directly under a highway. This has many implications, the main ones being salt and anti-freeze run-off going into the river, pollution, and greenhouse gasses.

Driving from Site 2 to Site 3 Alan talked more about the dangers of our influence on water systems. Roads tend to follow rivers, which I find to be an interesting remnant from a time when our culture depended directly on outdoor water sources for drinking, cleaning, and transport. However, roads have no positive effect on the rivers they follow. It’s easy for us to pollute them, and those pollutants get taken all the way to the ocean. Another dangerous way we pollute water systems is with run-of fertilizer, overloading systems with phosphorus and nitrogen. “[Nitrogen and phosphorus are] vital in every system, so it’s important we pay attention to them.” Nitrogen and sugar make up the backbone of DNA, without it there would not be life, but there can be too much of a good thing. By overloading waterways with nitrogen and phosphorus, algae can grow out of hand, blocking light and preventing growth of other organisms, making the ecosystems unhealthy (more about this here!). 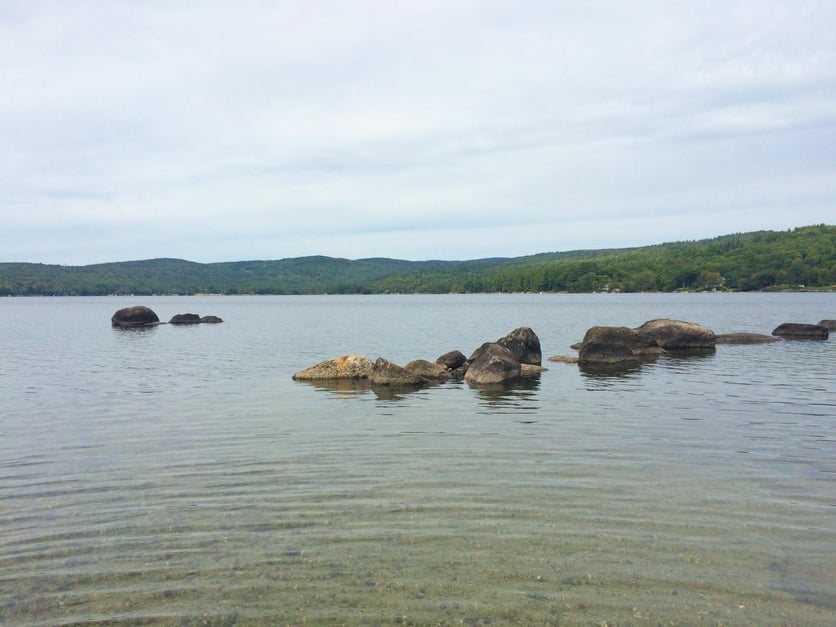 Finally we arrived at Site 3, the headwater, Pleasant Lake. Here we spotted very little vegetation and wildlife (some algae was noted), but that’s just because the area we were in was developed, still, and experiences frequent human disturbances. This was the warmest water yet—if it weren’t for the pull to get back to school for lunch, I think I would have gone swimming. The air temperature was 59.1 F, and the water temperature was 69.0 degrees. Turbidity was 0 jtu.

At the headwater human actions are extremely powerful, because what we do upstream magnifies as we move downstream. Alan proposes, “There’s this ethical dilemma we have to ask ourselves: Our behavior impedes upon other animals and their existence, so at what point do we say that’s not okay? Or at what point is how our behavior impacts our whole system not okay?” Looking around you can see that Pleasant Lake has quite a few houses around it, but how many have a barrier between their lawns and the shore? Most of them, but for those who don’t, do they realize that all the run off from their lawn goes into the lake? Do they know that they live at a headwater and pollution magnifies down the watershed? At what point do we say this is not okay? This is the question we a faced with at every turn, and like how pollutants are magnified downstream, environmental issues have magnified down the timeline of human existence, and this ethical/environmental question will magnify as well.

This eighty-minute trip was jam packed with data collecting experience, wildlife exploration and observation, information on natural systems, and discussion on human impacts and implications. I enjoyed myself on this field trip, and especially doing this write-up because it has allowed me time to deeper explore things only touched upon in the field, and find the connections and overlaps with other courses I’m taking. I also think it was smart a smart choice to have us visit the coldest water first, and spend the longest amount of time there, because at every site following the water seemed so enjoyable in comparison to the initial cold misery.