Segovia is both deeply rooted in the past and positioned for the future. An affordable, five-hundred megabit per second broadband connection provides us with an immediate connection to the outside world, and across the street from our apartment is a small convent of cloistered nuns. The streets and surrounding landscape invite reflection, during the two-hour break in activity in the middle of each weekday or in the plazas, parks, and cafés on the weekend. 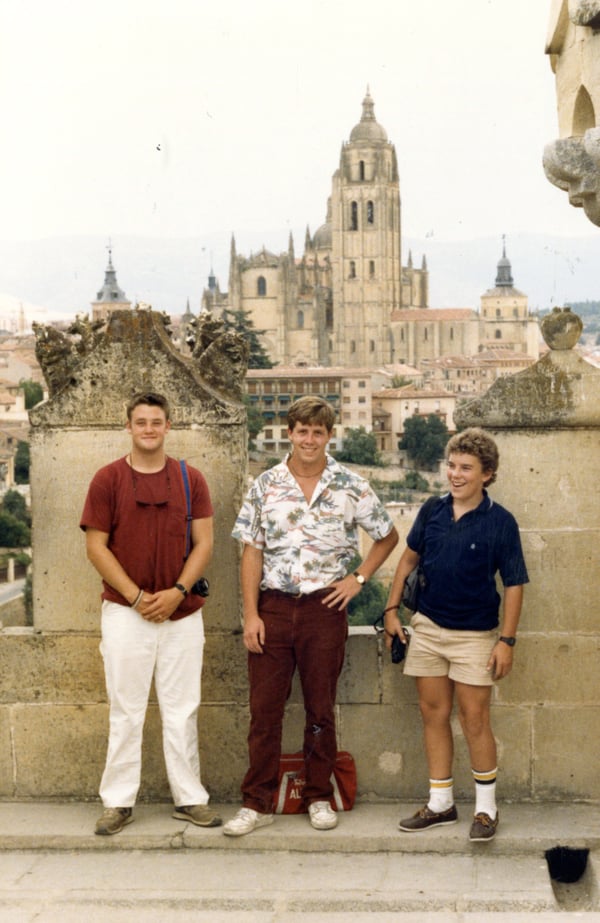 Proctor students pose atop the Alcázar (Segovia's castle) in 1985.

All of us have been impacted by the global pandemic. Wherever we have found ourselves during the past sixteen months, our patterns and habits have been disrupted, and, for some, there has been more time to pause and reexamine many aspects of our lives. It has allowed us the chance to rebalance and reprioritize if necessary. It has also given us a renewed sense of gratitude for people, places, and experiences that we had perhaps taken for granted. We see our worlds with fresh eyes, our perspective altered by this new context. We have a new appreciation for in-person instruction and relationships, as well as opportunities to travel and study off campus.

A Proctor en Segovia scavenger hunt during the winter 2020 term. 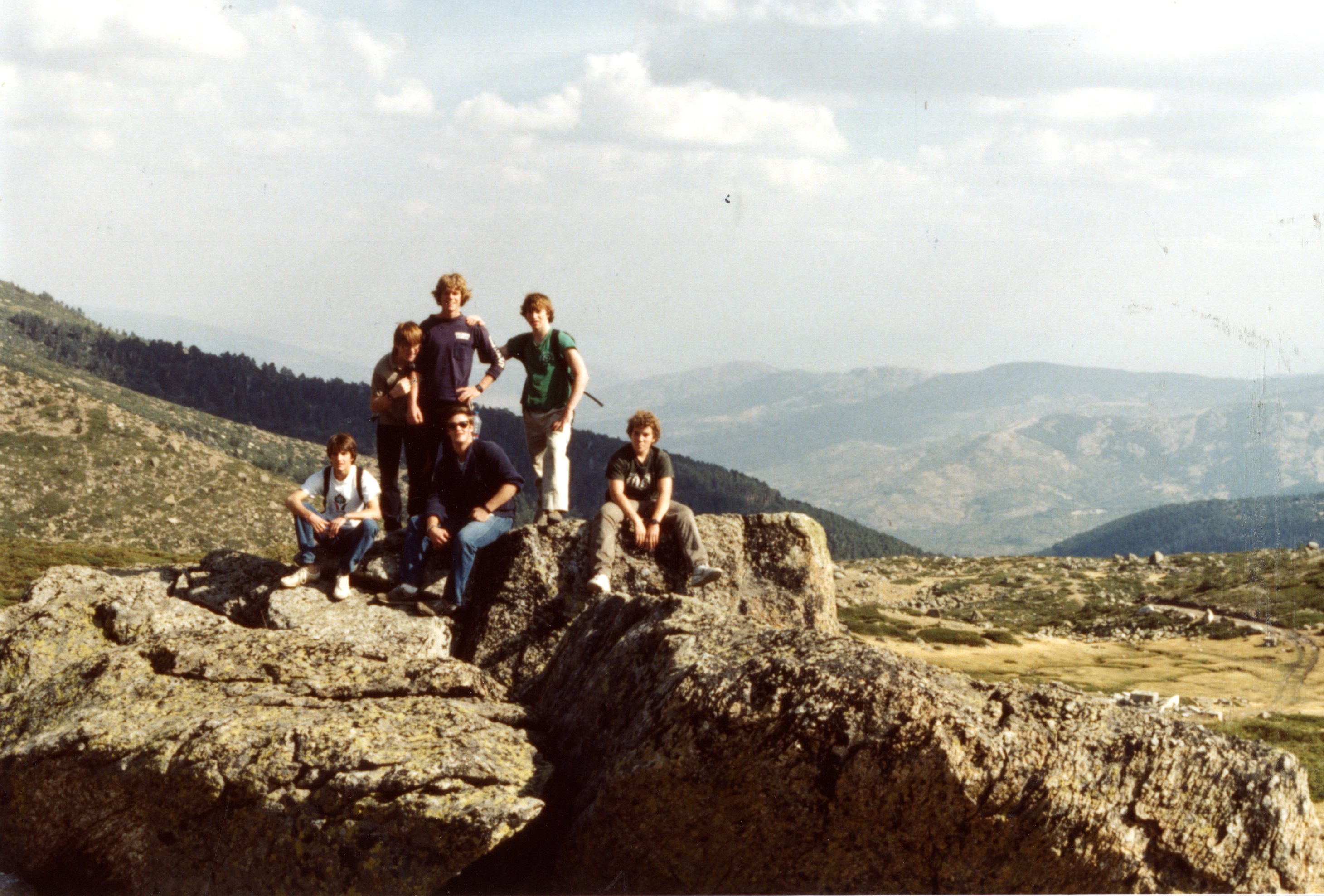 Proctor in Madrid visits the Sierra de Guadarrama in 1985.

There are parallels in this pandemic-driven shift in perspective with what occurs at the beginning of every Proctor en Segovia term. Program participants land during the Spanish madrugada or "very early" morning, when Madrid is still sleeping and the surrounding plains are shrouded in darkness. They emerge from passport control and baggage claim somewhat disoriented by the bright lights of the airport, anxious and filled with enthusiasm for the journey ahead. After we board the minibus bound for Segovia, the sky begins to lighten and the questions begin — about host families, Spanish phrases, travel aspirations, and hopes and fears for their term abroad. Shortly after traversing the Guadarrama mountain range via the three-kilometer A-6 tunnel, students begin to make out the cathedral bell tower far off in the distance, and the vast plains of Castilla stretching beyond. Once in Segovia city limits, they pass under the 18th century Puerta de Madrid neoclassical “gate” and are then greeted by the besos of their host mothers. And off they go! 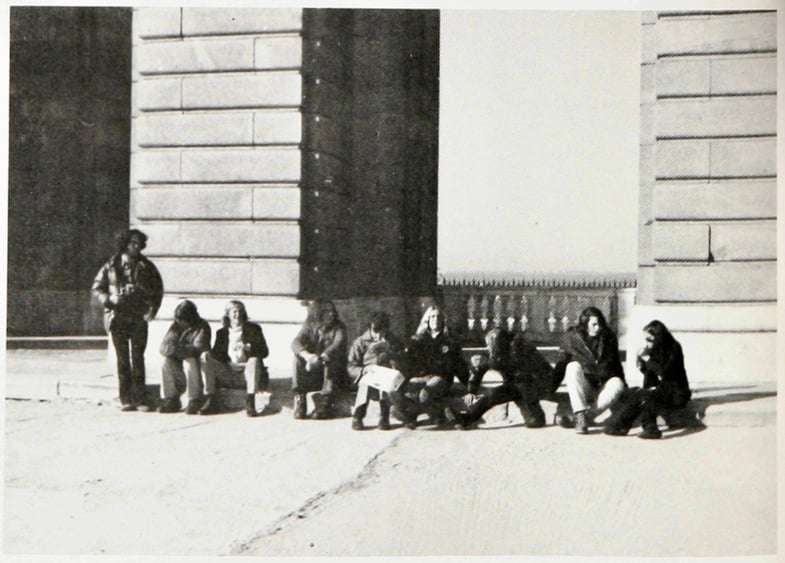 Proctor Academy has operated an off-campus program in Spain -- first in Madrid and then Segovia -- since 1974 (the date of this yearbook photo).

Proctor en Segovia winter 2020 students at the Roman archeological site of Italica outside of Sevilla.

For each new group of Proctor en Segovia students, their experience begins as a blank slate. They are immediately immersed in the language and culture, and their perspective begins to widen and their understanding Spain, its people, and the world beyond begins to deepen. They observe, compare, contrast, and challenge preconceived notions and ethnocentrism. They learn by doing — by speaking Spanish, navigating their way through big cities and small pueblos, and through immersion in host family life. 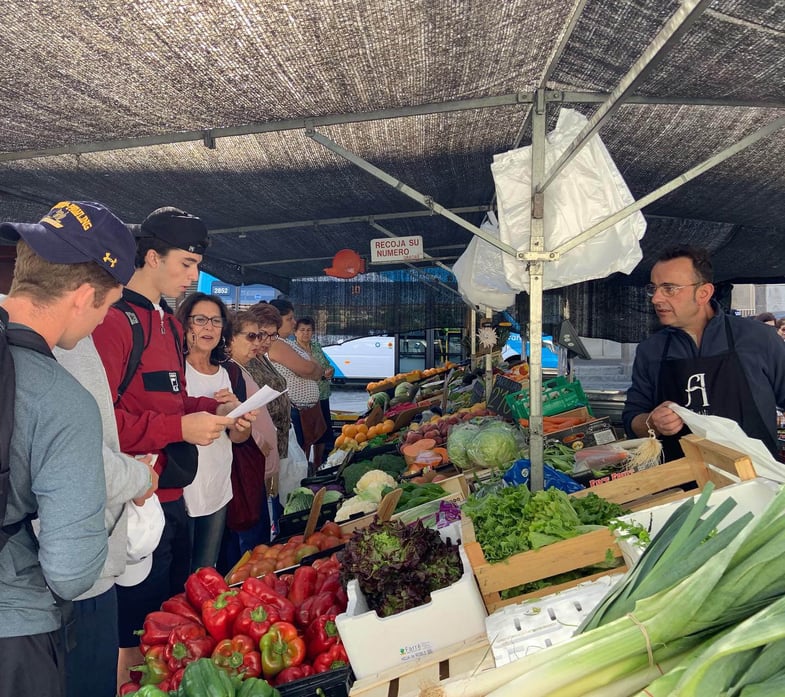 They examine familiar issues — the climate crisis and populism, for example — through new lenses and discover new challenges. And, of course, they develop an appreciation for the Spanish language, history, and culture — from soccer and food culture to Goya and al-Andalus arabesque. It often takes years or even decades to process, but the experience sticks with them, informing their future in ways they cannot predict.

“Studying a foreign language abroad while living with a host family changes a student’s perspective on the value of language and the possibility of learning languages. They hear all the time that languages are important, but in Spain and Costa Rica, they understand that they are important. Learning changes from a classroom and academic subject to something that is happening constantly, during all of their daily interactions.” 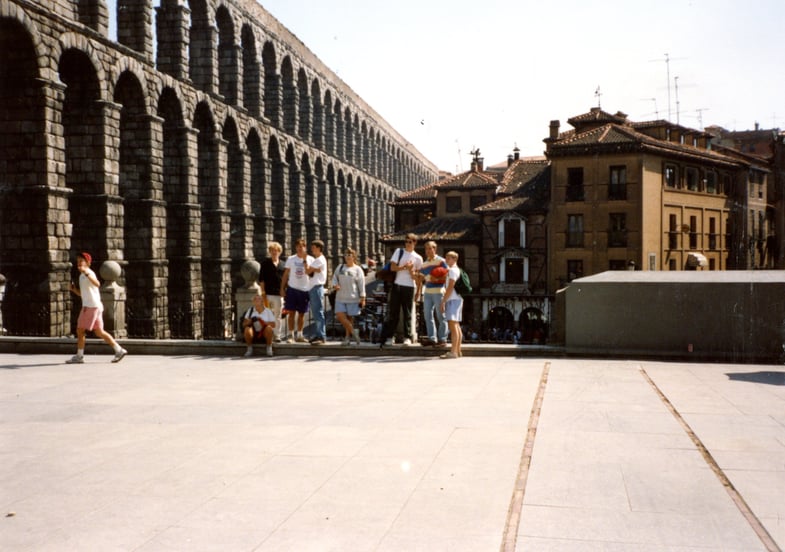 Proctor en Segovia students take a selfie with Spanish Prime Minister Pedro Sanchez in the Plaza del Azoguejo (below the aqueduct) in 2019.

Over the past sixteen months, Proctor’s in-person linguistic and cultural immersion program in Segovia has been paused, but the school's commitment to the Spain program has remained strong. The school space on Segovia's Plaza Mayor remains, lying dormant and patiently waiting for Proctor students to return and fill its rooms with stories and practiced Spanish phrases. Sixteen months is a blink of the eye in the history of Segovia (and Spain), and even in the history of Proctor Academy’s off-campus programs. Proctor has operated in Spain since 1974 and in Segovia since the early 1990s. Students and faculty have witnessed the fall of a dictatorship, a tumultuous yet peaceful and successful transition to democracy, a failed coup d’état, EEC and EU membership, domestic and extremist terrorist attacks, economic booms and recessions, and now a global pandemic. 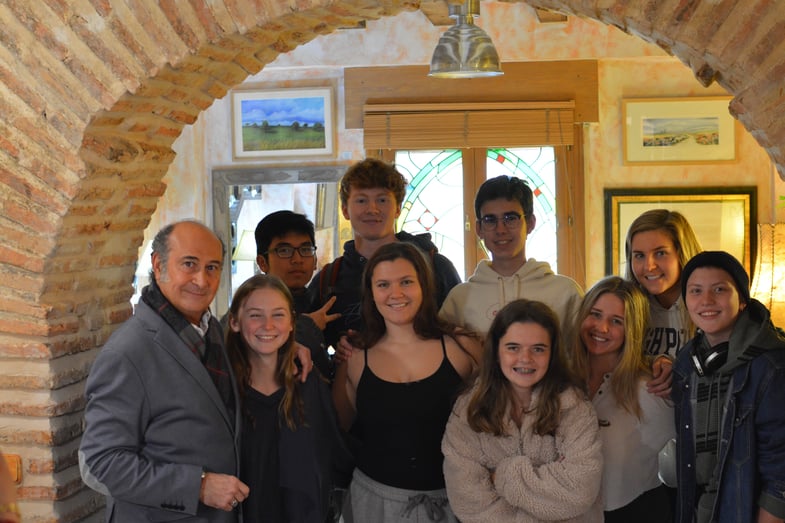 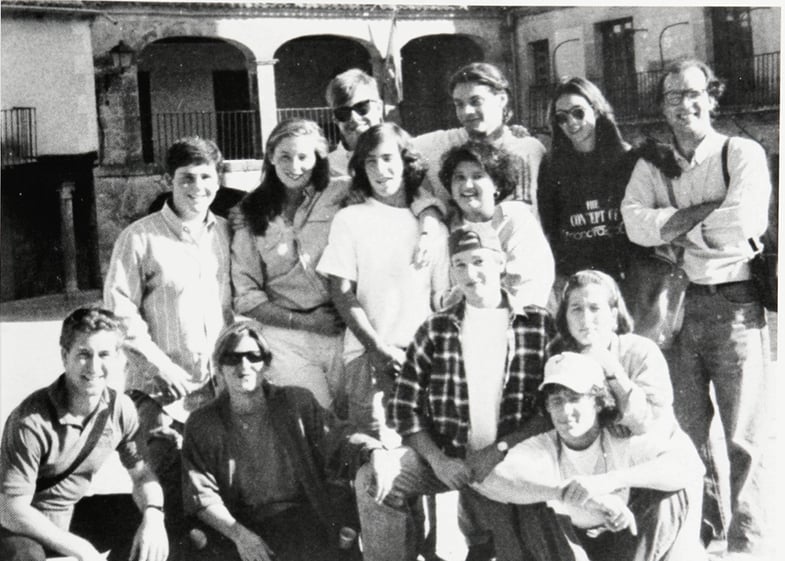 Yes, current Spanish teachers Rosa Palomares Gómez and María José Ortega Rokiski are in this photo taken in Pedraza (Segovia province) during the fall of 1991, after the program moved from Madrid to Segovia.

The prospects of a fall term in Segovia currently look good. Airplane tickets have been purchased, vaccinations administered, and CDC vaccination cards obtained and ready to be presented. Segovia is waiting, changed somewhat during the past sixteen months, but ready to receive Proctor students. The Guadarrama granite pilares of the aqueduct, the never-ending Calle Real that funnels locals and visitors alike between the aqueduct, Plaza Mayor, and Alcázar remain. And, most importantly, relationships with Segovians are intact. 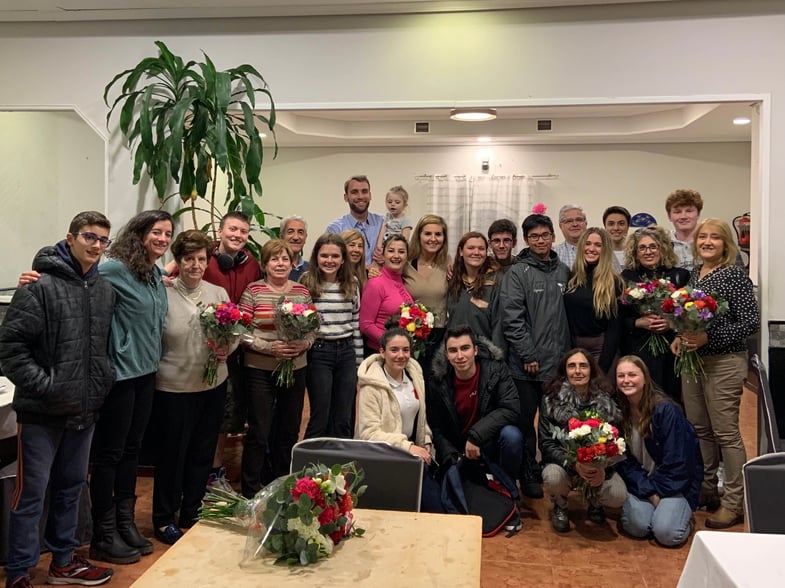 When I returned to Segovia after a long absence, to pack up some of our things in preparation for our family’s move to Andover, I was relieved to come across one of our neighbors. She must be in her eighties, but she is as lucid as ever and, thankfully, has received both vaccine doses. She addressed me as if no time had passed. Instead of asking where I had been, she said, “¡Hola vecino! ¿Cómo está Lucia y qué habéis hecho hoy?” (“Hello neighbor! How is Lucia (our daughter) and what did you do today?”) I took solace in this continuity. I imagine this is how many Proctor alumni feel when they return to campus for a visit and are greeted by a familiar face. This fall, the next group of eager Proctor students will be welcomed by new Co-Directors Luis and Ellie Mendoza, ready to embark on their Proctor en Segovia journey.

After almost fifty years of continuous operation in Spain Proctor welcomes two new Proctor en Segovia Co-Directors this fall, Luis and Elizabeth (Ellie) Mendoza. Both have deep ties to Spain and extensive experience teaching Spanish and leading (and participating in) study abroad programs, both in Spain and Latin America.

Proctor in Madrid students attend a soccer match in 1988. 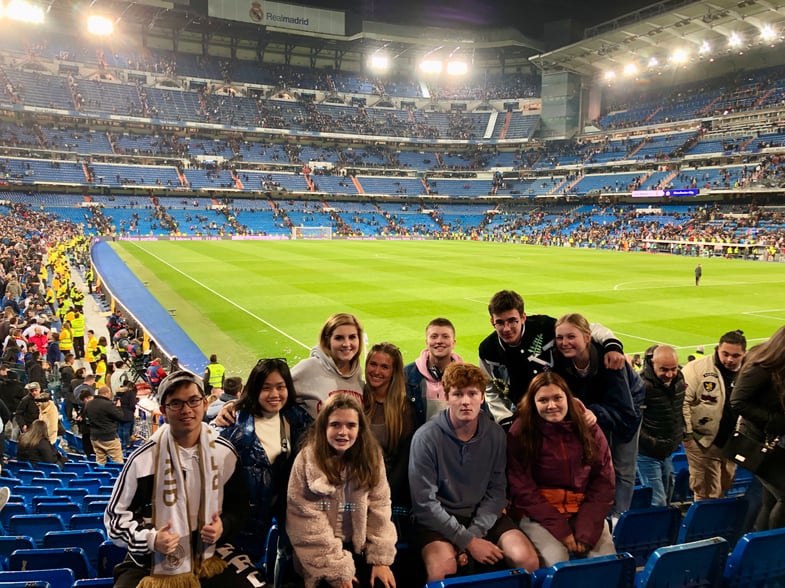 And Proctor en Segovia students after a Real Madrid match in 2020.

Ellie’s experience with her homestay family as a college junior remains a life highlight. Her Spanish madre and hermano left Spain for the first time to attend Luis and Ellie’s wedding in Maine. She considers them a part of her family. Early in their relationship, Ellie’s host father actually met Luis before her real dad did!

Luis’ father is from Madrid and his aunts, uncles, and cousins still live there. Family, travel, and Spanish culture are important parts of their lives, and they are thrilled to be moving their family to Segovia.

Ellie is a graduate of Bates College and returned to teach at her high school alma mater, Waynflete School, in Portland, ME. She has taught there for eight years and is thrilled to bring her challenging, caring, and creative teaching style to Proctor en Segovia. Luis has taught at the Gunnery, Taft, Berwick Academy, and most recently, in a language immersion class in the Portland public schools. One of his core beliefs is that to be a good teacher, one needs to be able to teach any student. His diverse experience, as well as his Colby College degree and M.A. from Middlebury College, make him a knowledgeable, dedicated, and thought-provoking teacher.

"We both have always worked hard to make Spanish accessible to all learners in our classrooms. Proctor has taken this pedagogical value and turned it into an incredible study abroad opportunity. When we found this position, we knew that Proctor en Segovia was the best place to go to grow our passion for teaching." 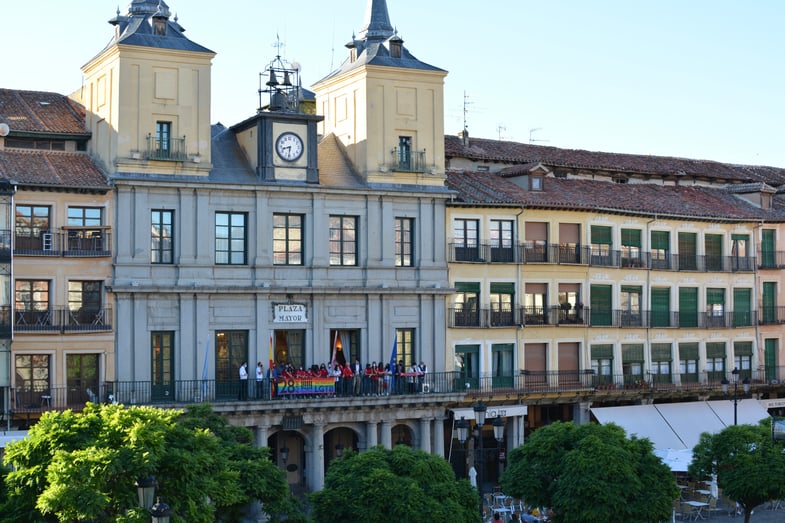 Luis and Ellie have a two-year old son named Fernando who loves tennis, golf, soccer, and anything involving hitting or kicking a ball. He also loves to eat and makes the best facial expressions. They are raising him bilingually, and they look forward to the opportunity for Fernando to learn from teenage role models as he experiences Spain from his stroller.

“We have mapped out the trips for the Fall term and are so looking forward to new experiences with the students. We plan to put an emphasis on the art museums of Madrid as well as the local historical architecture. Outside of Segovia and Castilla y León, our trips will expose students to the coast, the countryside, and more urban experiences. The English course will begin with a travel writing unit centered on the book Grape, Olive, Pig: Deep Travels through Spain's Food Culture. And the history class will start from present day politics and move back in history. The students will actually be able to stand in the places they learn about - as thousands have before them - yet another reason this program is so amazing.”