Proctor en Segovia Fall 2022 program participants have completed their first full week of living and learning abroad in Segovia, Spain. As they acclimate to new classes and life with a Spanish host family, students learn to suspend judgment and through observation and experience. They also build new connections with each other, their teachers, and their host family, often over a shared meal. In this post, students write about their first twenty-four hours in Spain, communication in a foreign language, and food and cultural differences.

The view from El Pinarillo looking back at the casco antiguo (old quarter) of Segovia and the Cathedral. The group met at Boston-Logan airport to begin our extensive day of travel on September 7th. After giving hard goodbyes to our parents and friends we headed through security for our new journey. The flight was a long seven hours and we had a choice of pesto tortellini or chicken of some sort. Lots of Netflix was consumed, music was listened to and some tried to sleep. Pearce and Will had a situation with their seats but ended up being able to sit together for the long journey. The screaming children made it hard to sleep, and due to the kindness of an airport worker, Mia, Presley, Henry and Willem were able to find seats together. 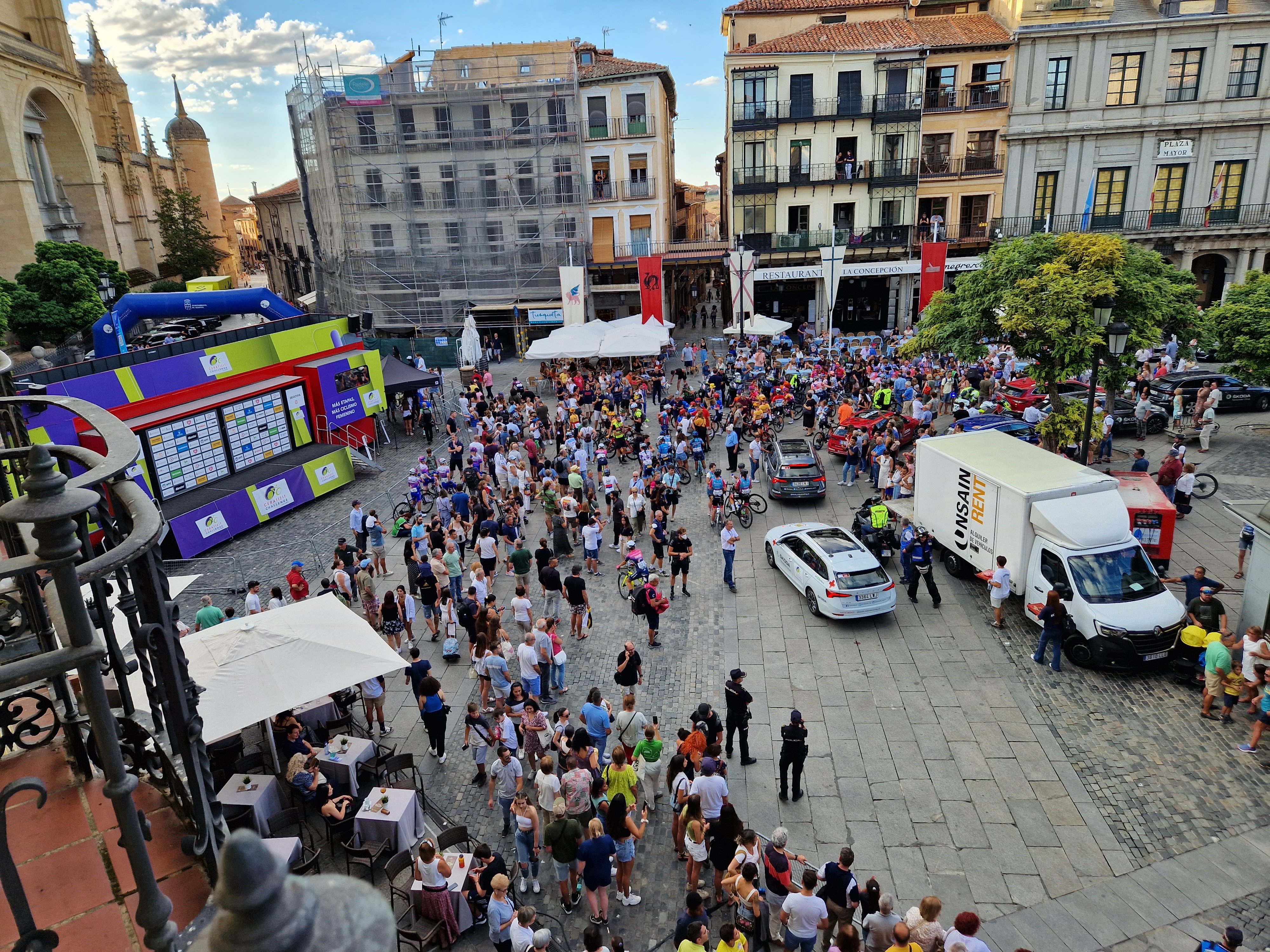 The Proctor en Segovia center is located on the Plaza Mayor, in the heart of the old quarter.
Here people gather at the finish line of Vuelta a España Femenina (women's multi-stage cycling race).

When landing in Madrid, a major culture shock set in because it was 7:30 in the morning and the sun had not risen yet. Will decided to leave his water bottle behind and exit to the airport. He realized he left it and had to trek back onto the plane to retrieve it. The line for customs was not too long and everyone successfully entered the country. The group got a little lost while trying to find Luis. The Madrid airport was much bigger than we expected and very industrial looking. The sun rose and we headed to the bus and climbed on sleepily while slightly annoyed to have to wear a mask again. Many slept on the bus ride to Segovia and awoke to the welcoming arms of host families. Everyone got united with their new families and headed to settle into their houses. 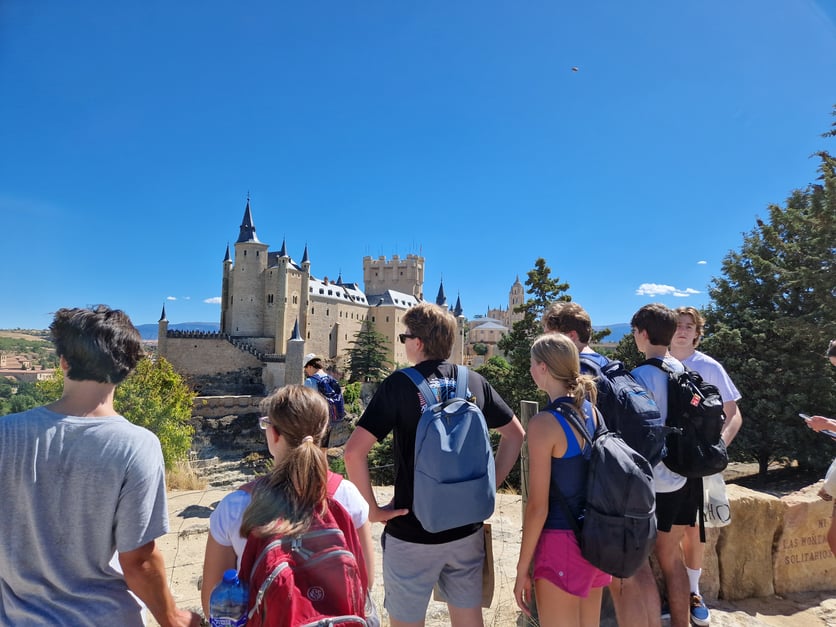 The group gathered back together a few hours later at the school and had orientation. Many of us were very sleepy and trying to stay awake till late at night in order to properly acclimate. It took a few days to get used to life here in Segovia, but we have had lots of fun so far. We are excited for what's to come and know that more travel is in the books but much smaller journeys. 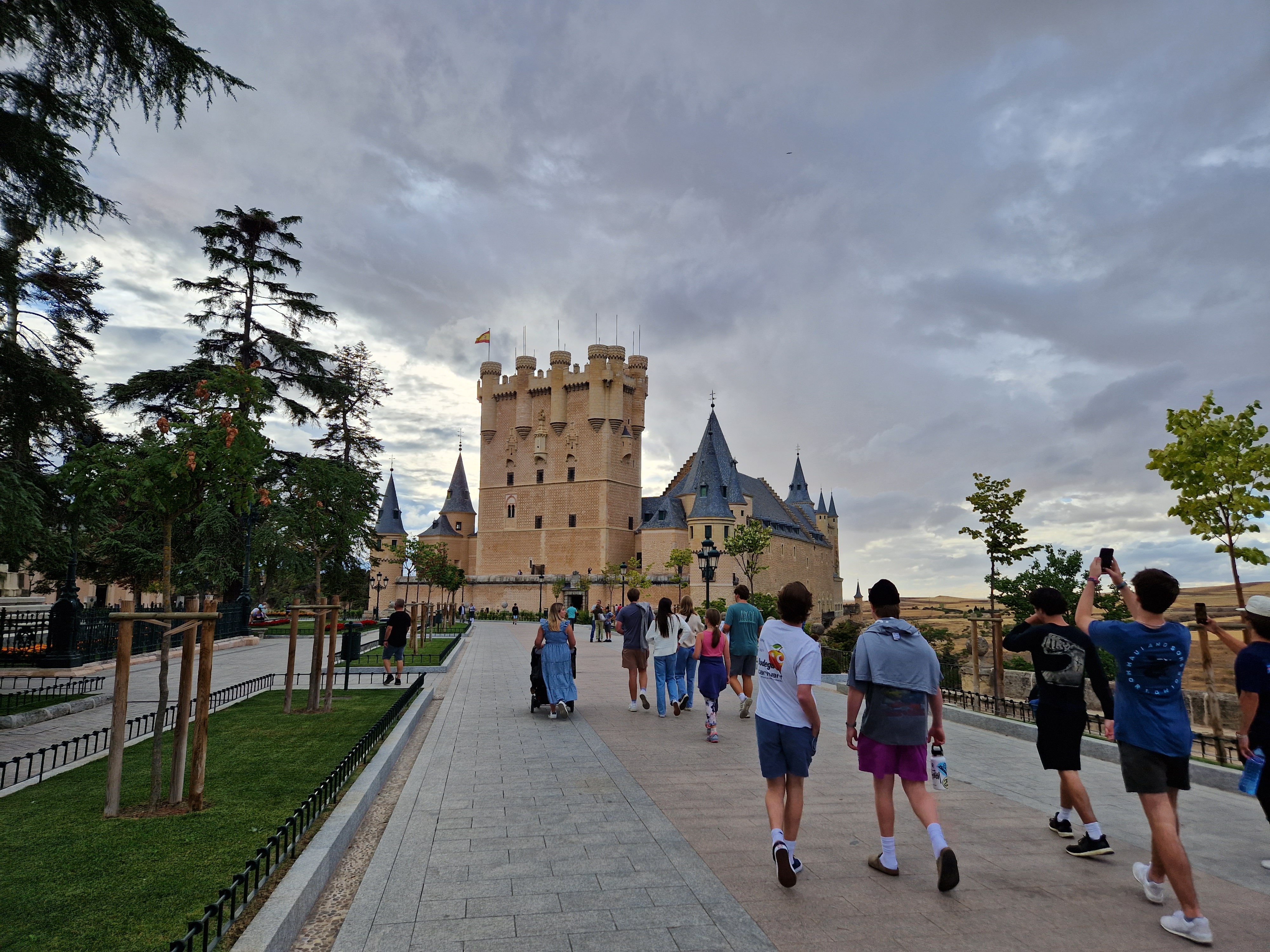 The approach of the Alcázar from the city or old quarter side.

My host family has been a great experience so far: the food, their friendliness, and their pets too. Most lunches and dinners, Ana and Jose Luis sit around the table with the TV on while eating, watching the news. With the Spanish people I know, I talk to them about the news on the TV and Spanish culture, which they know plenty about. The language barrier was definitely a bit of a shock for me at first, when I realized how fast my host parents spoke, and that my Spanish was not as good as I thought it was. However, within a week of being in Spain, my Spanish has already improved greatly, and I am able to communicate far better with my family and local Spanish speakers. 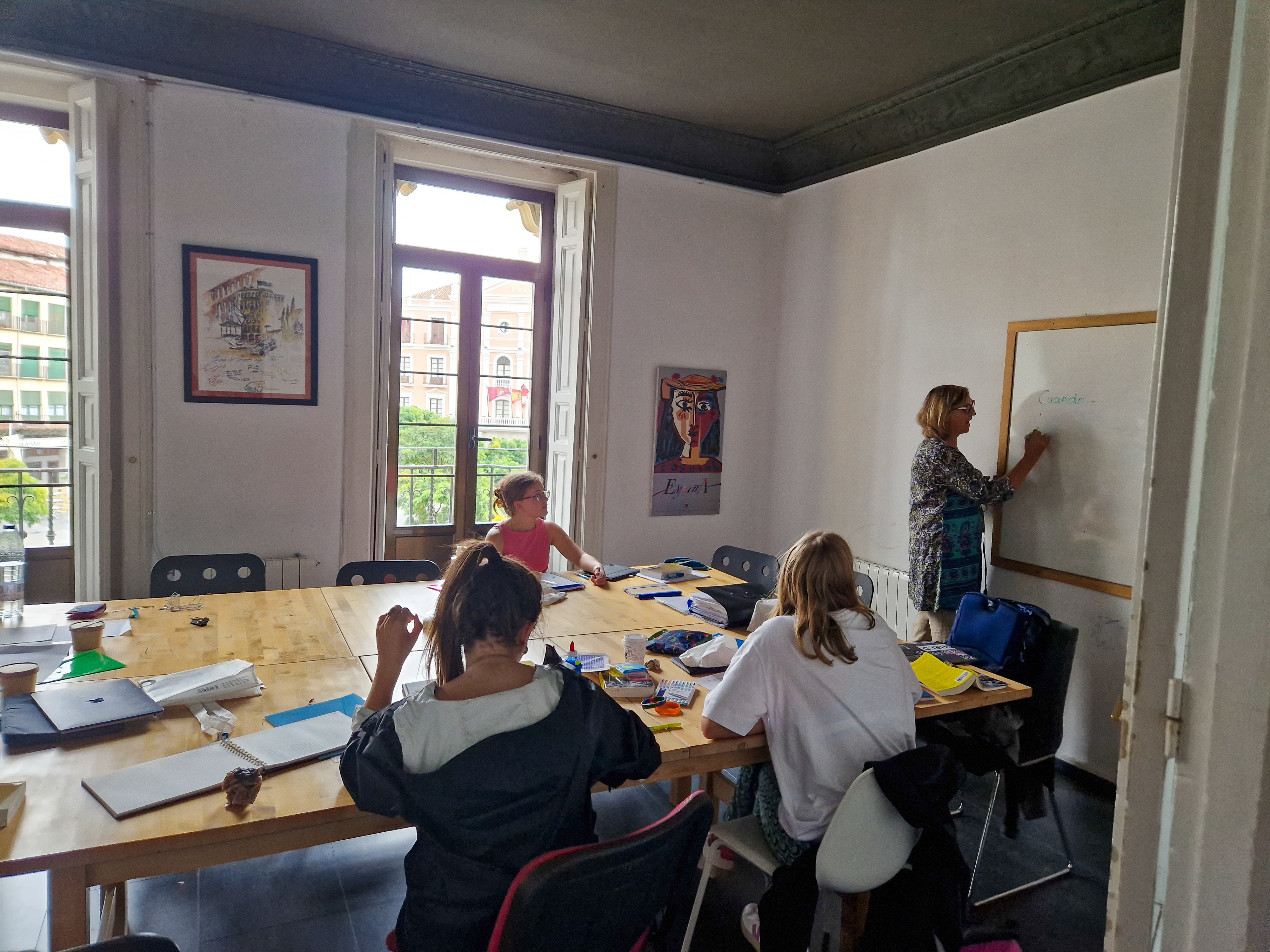 The transition into my host family has been great for far. At first it was strange because I was in a new country with a family that doesn’t speak English and with people that I have never met before. Being part of a new family and new culture was definitely a bit overwhelming at first. During the car ride to my host family's house, they were asking me many questions about my family, where I live, and how the plane ride was. Having not taken Spanish for a whole year, I simply preceded to just say yes to anything they asked me. They asked me where I was from and I responded with “sí,”; they asked me how the plane ride was, and I responded with, “sí.” During the first couple of days, communication was definitely hard. The last few days have actually been better due to being immersed in the language and talking with my host family constantly. Starting Spanish class also helped. I have only noticed that communication and my Spanish in general will get better with time. 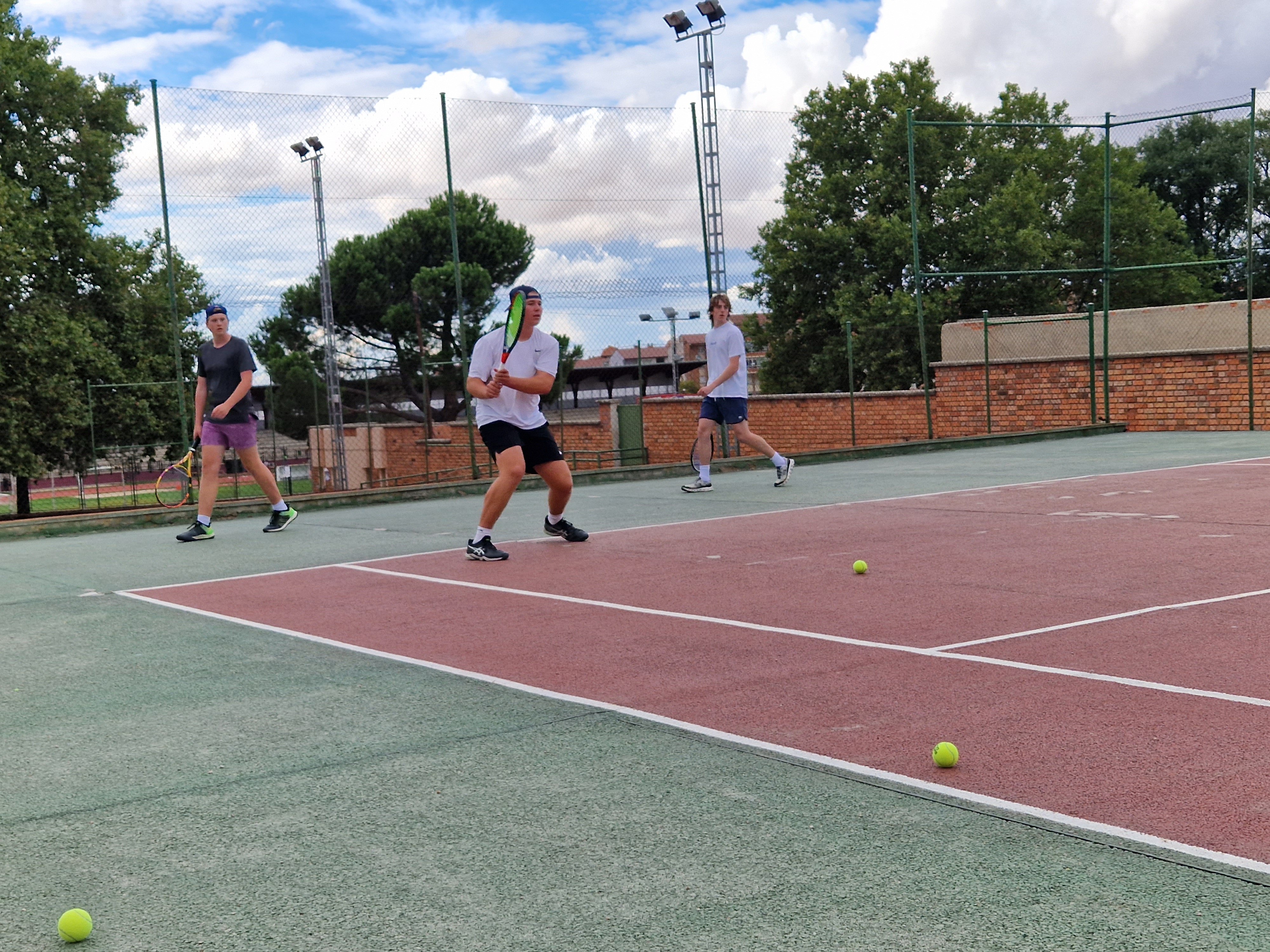 I think my favorite part of Spain has been getting to know my host family. At first we could barely communicate with them, but my Spanish has improved every day. I remember when I first got here my host Dad drove me back to the house I would be staying in and the car was basically dead silent. However the past few days I have been able to converse over meals and communicate about topics I did not know I could. For example, Miguel and I watched basketball and talked about players who played in Europe like Luka Doncic and Kristaps Porzingis. It’s so cool that I was able to communicate about my favorite sport with him. 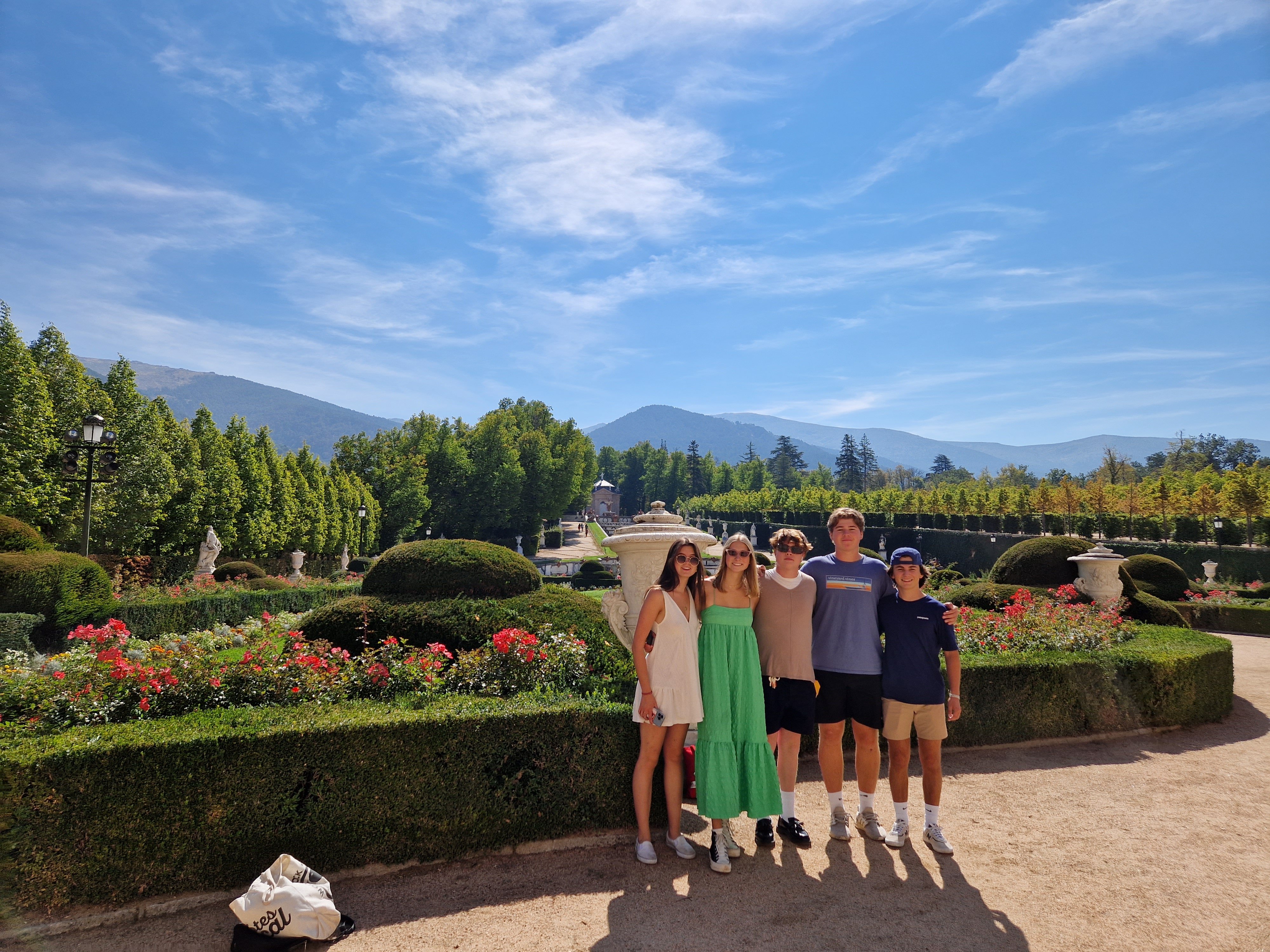 Students posing in the palace gardens of the La Granja royal palace.

The first meal I had in Segovia was dinner which consisted of an omelet with ham and peas. Usually, for breakfast, I would have something like that. This gave me the first impression of exciting cuisine. The food kept improving throughout the week, like tortilla de patata, which consists of eggs and potatoes, which I enjoyed. I’ve also had lots of steak and chicken and tomatoes with dressing. They prepare their cuisine very differently from the United States, serving certain things at certain times we usually wouldn't have.

The meals that stuck out for me were when we ate out, specifically the tapas, which were small dishes like an appetizer. I had never had anything like this before, and it was exciting to try the new meals for the first time. Most days, for breakfast I end up going to a café. I usually get a croissant and a coffee for the morning and eat them in the classroom. Meals with my host family have been fun. Communicating with them has been a challenging learning experience but a beneficial one. My favorite meal was when I went to a restaurant with Pearce and Oliver. The restaurant had a swift service time, and the food was very good. I got a burger, but they also had delicious sweets there. The restaurant had a game in the corner where you could play whack-a-mole. You would order on a screen near the entrance, and to get your food, they would give you a ticket with your order number on it, and once they called it out, you could go out and get your food. 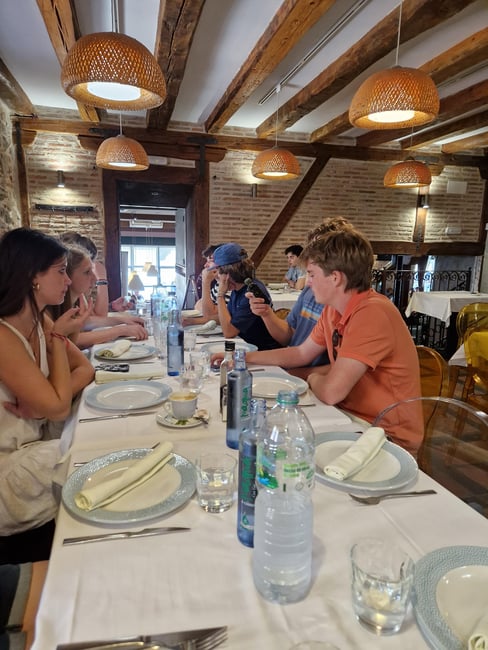 We've gone out as a group for tapas and have been able to try many different options. Breakfast for me is usually on the way to school. Being able to stop at various cafes and grab a coffee and pastry has been enjoyable. On Thursday, we had our first cooking class and made paella. It was delicious. 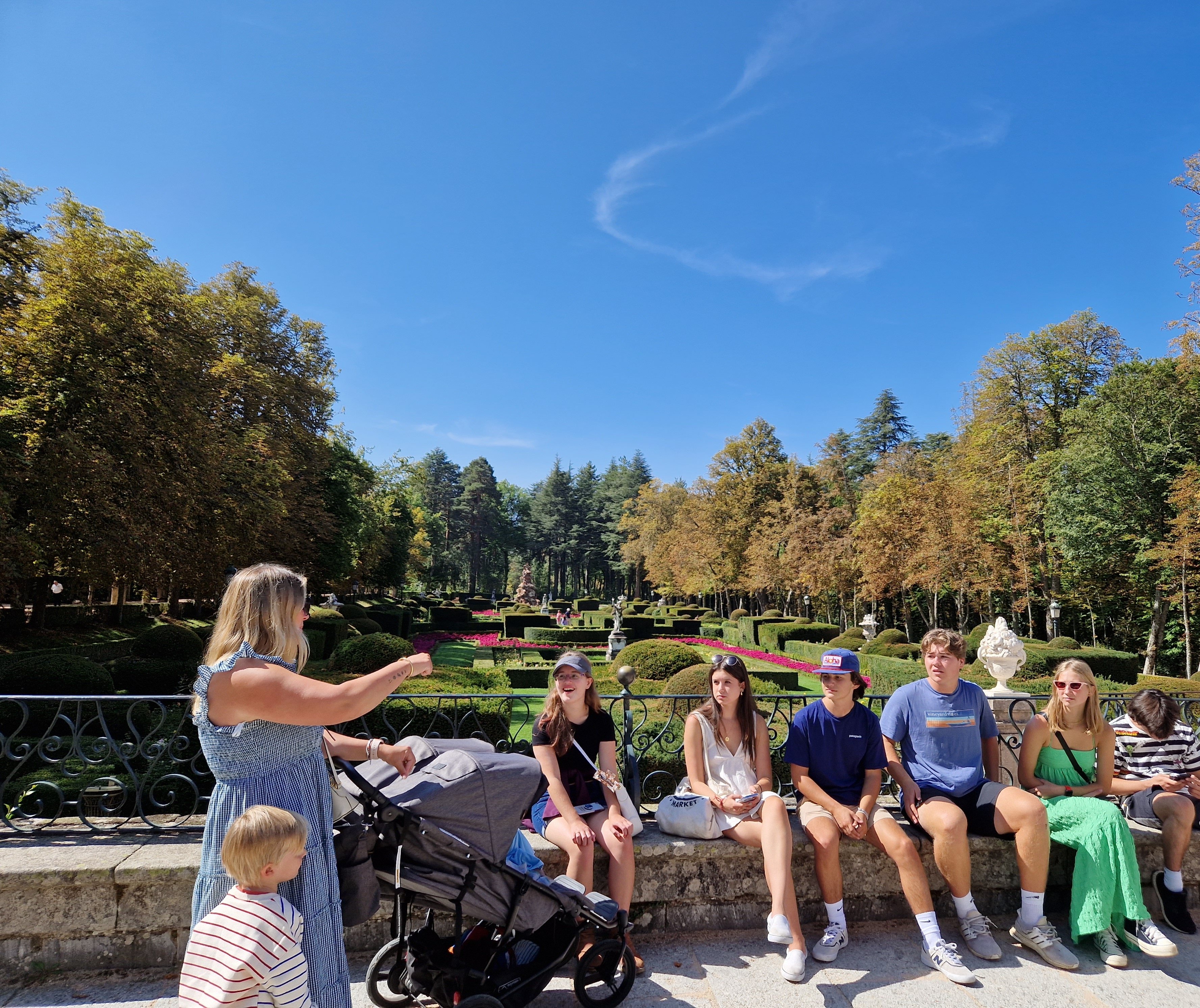