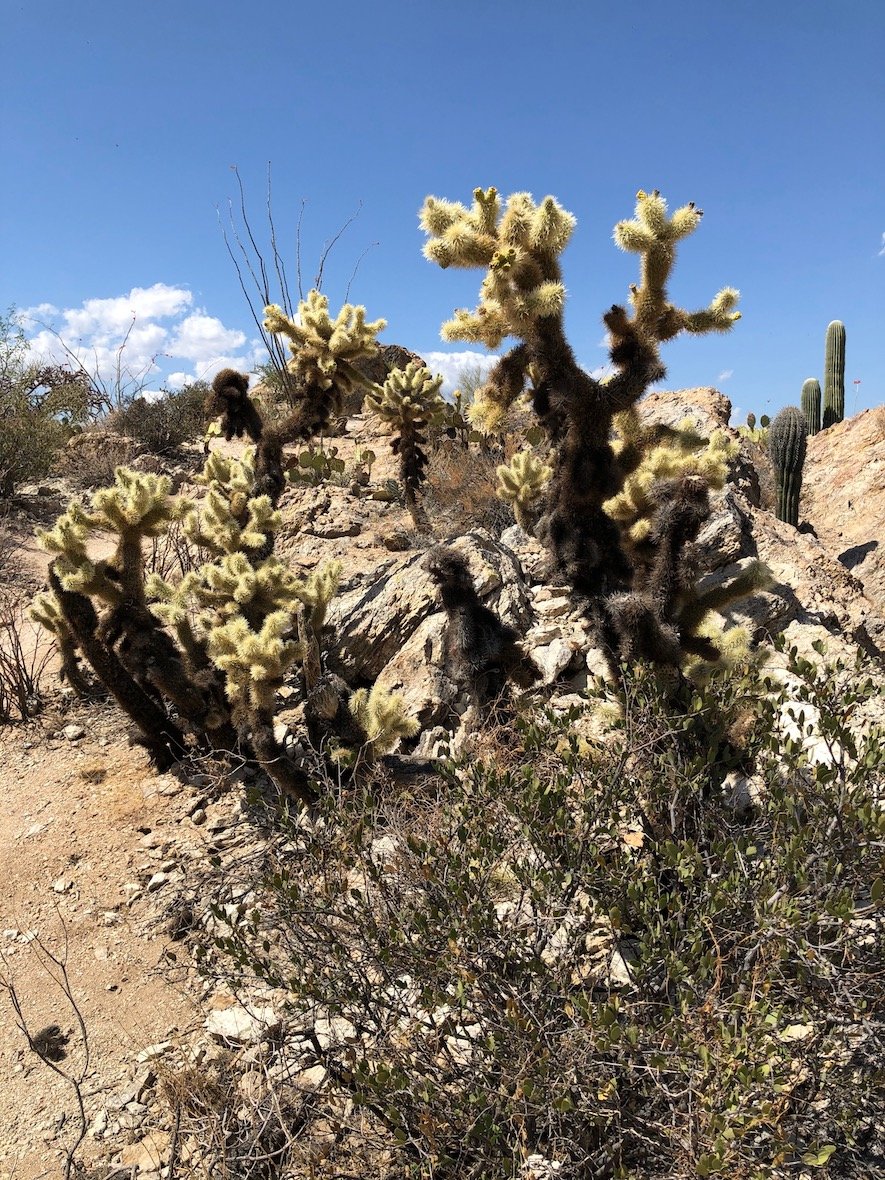 Sonoita. Historically, the word originates from the O’odham language and translates to “spring field”— an ironic assessment, seeing as none of us witnessed a drop of fresh water during our five-day excursion.

Oh, and it’s pronounced sun·oy·tuh, which is bitterly disillusioning after five years of reorienting my understanding of word pronunciation to the rules of the phonetically friendly language of Spanish. 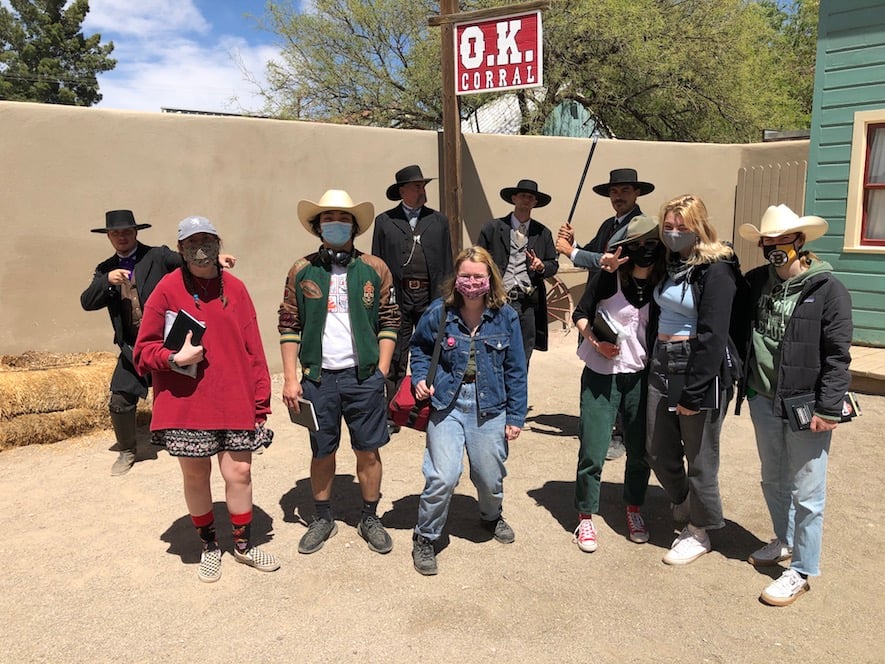 This was the first week we spent out of Casa Grande (whose pronunciation is also revoltingly Americanized), and there are tons of highlights that range from the O.K. Corral gunfight reenactment in Tombstone to watching the life-changing cinematic masterpiece that is Romeo and Juliet (1996).

We set off at around 10:00 A.M. on Monday and our first stop was a little hole-in-the-wall art supply shop where we each got some loose materials to try out. An hour or so later when we rendezvoused at the Church of St. Rita for a carnet entry or five, I tested out my water-soluble colored pencils and dipping pen & ink. The freedom of our travel breaks is much appreciated; we all kind of get to do our own thing. 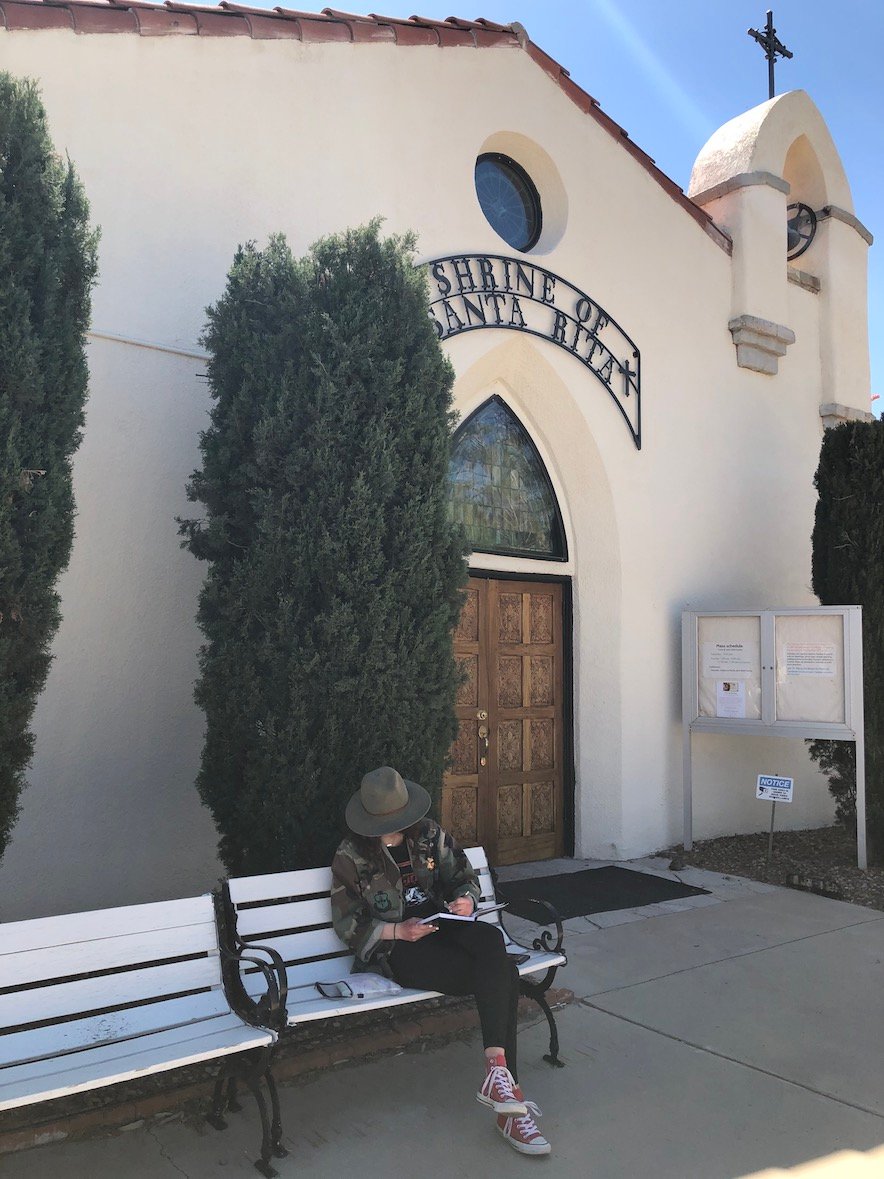 I can’t remember the last time I’d been in a church, but I sat at a pew for a little while and looked at the vaulted ceiling, at the stained glass windows and sculpted figures on either side of the altar, and when I craved a change of scene, I went outside and sat peacefully on a bench nearby Jen, Toby and Stella, who were doing some carnet sketches of their own.

A while later we made it to our Verbo home, and a few of us were very enthused to discover the foosball and shuffleboard tables just beside the dining room.

Our last activity of the evening was Juno, which I personally adored (hilarious script, flawless soundtrack). I was prepared for it to end either in tragedy or some other plethora of inexplicable disturbances after the ending of a certain movie-that-will-not-be-named shown to us a few weeks prior, however, Juno was super cute, and it instantly jumped up onto my list of favorites.

On Tuesday we went to hang out with Dave’s dad, Mom and "Sister Wonderwoman” Judy, a local Nun, at a park where we waited a thousand years (rough estimate) for food at a taco truck — but it was totally okay because we had really good clusters of conversation and the vender was really sweet. And also at the time we were a party of thirteen people after all. 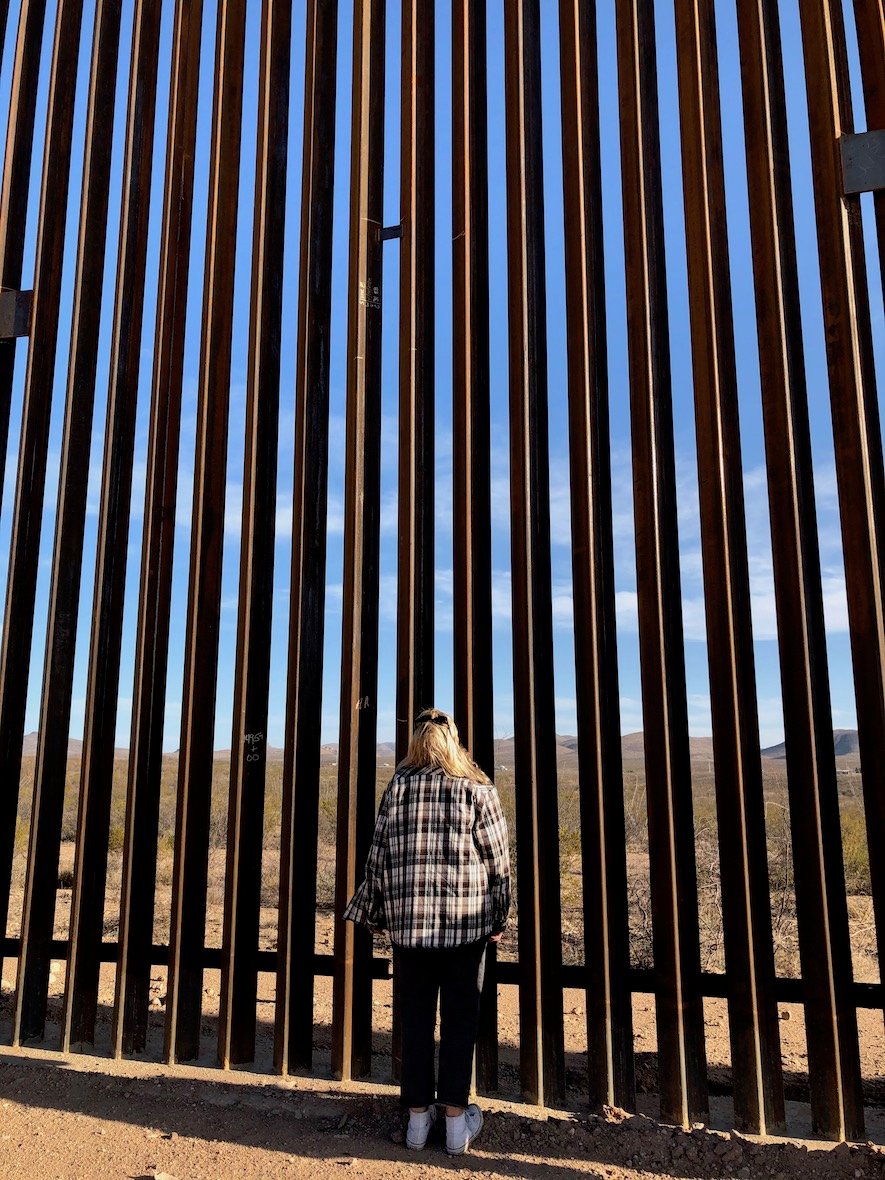 All in one day, we visited the Gadsden Hotel, Art Car World, and the infamous Wall. The latter was quite depressing, but informative and touching no less. Dave’s parents build and decorate crosses for the migrants who make it over the wall, but perish shortly afterwards. The one that we saw was labelled No Identificada. 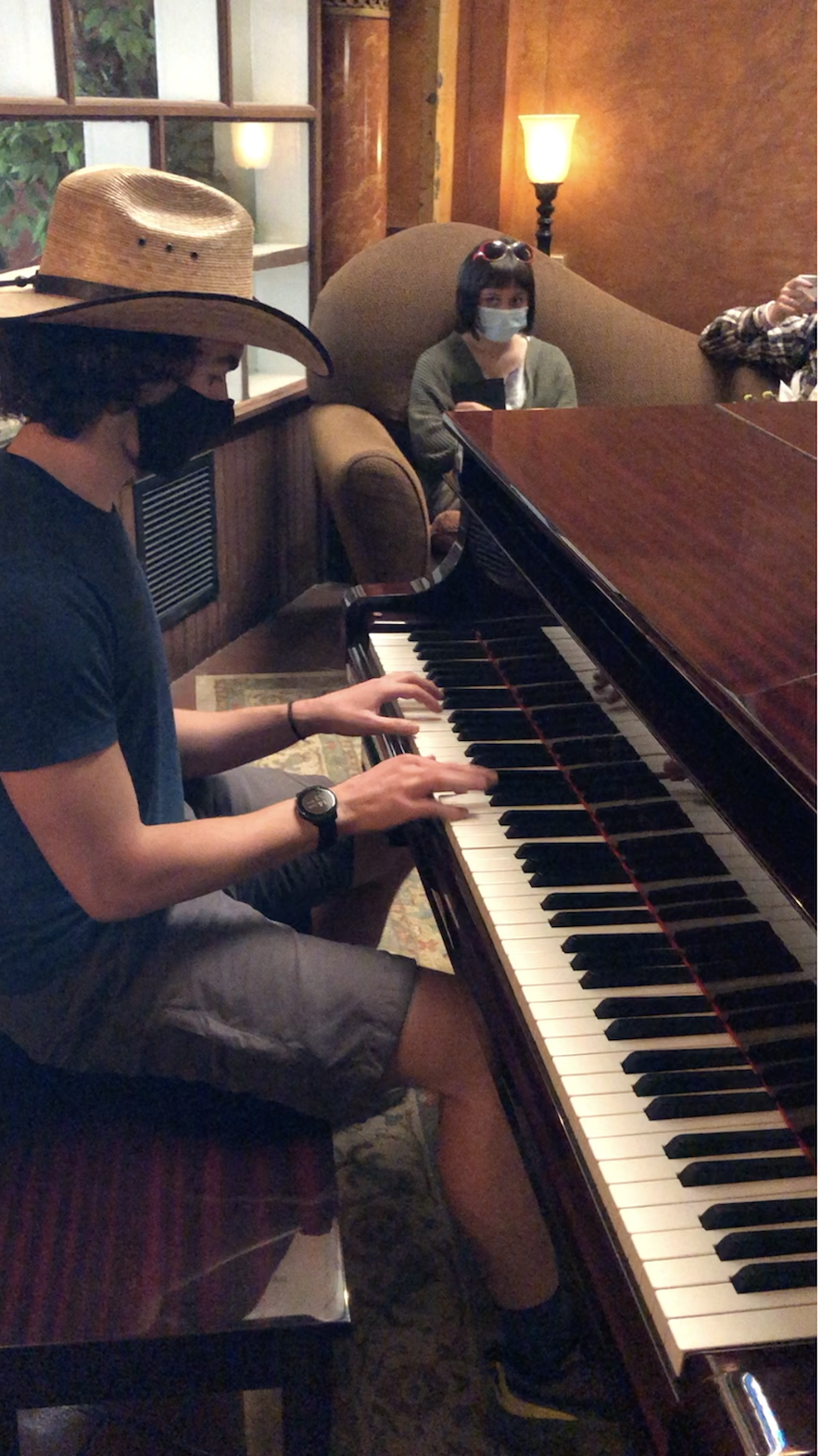 The Gadsden Hotel is a historical location and has beautiful architecture for a carnet  (sketchbook) op, a piano player and stained glass windows by a man who studied and worked under American Louis Comfort Tiffany. 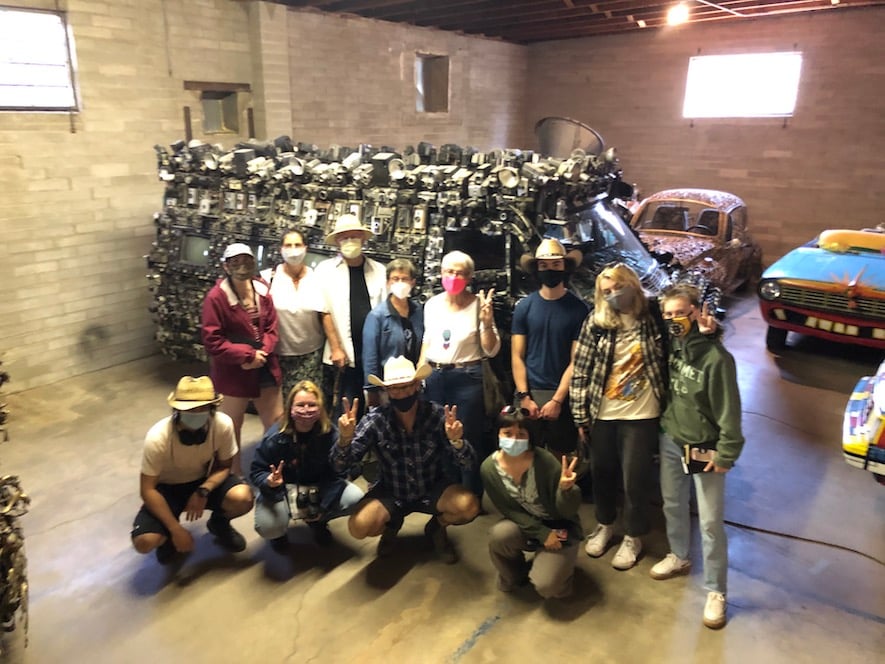 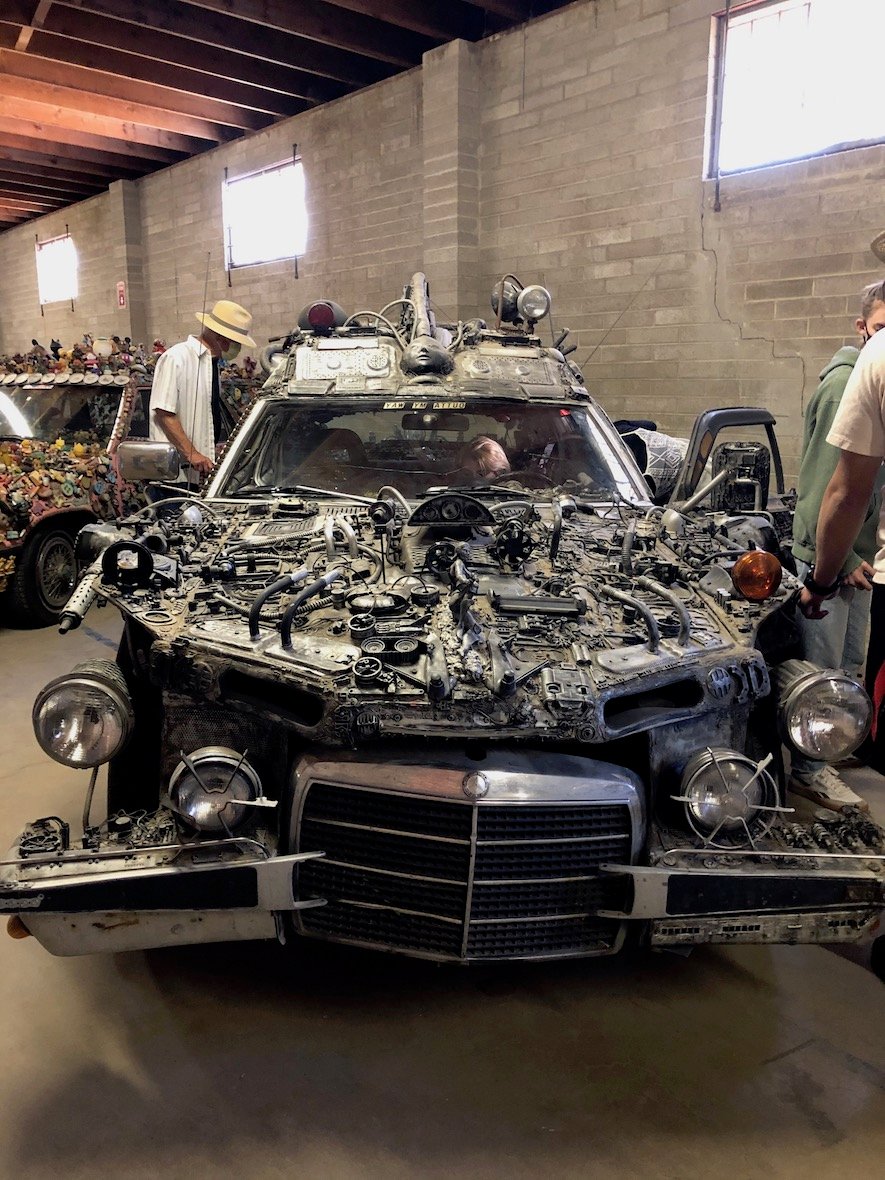 "Art Car World", which I can only describe as a “cool car museum” is a center that displays custom-designed and decorated cars from many decades, made individually by dozens of different artists. 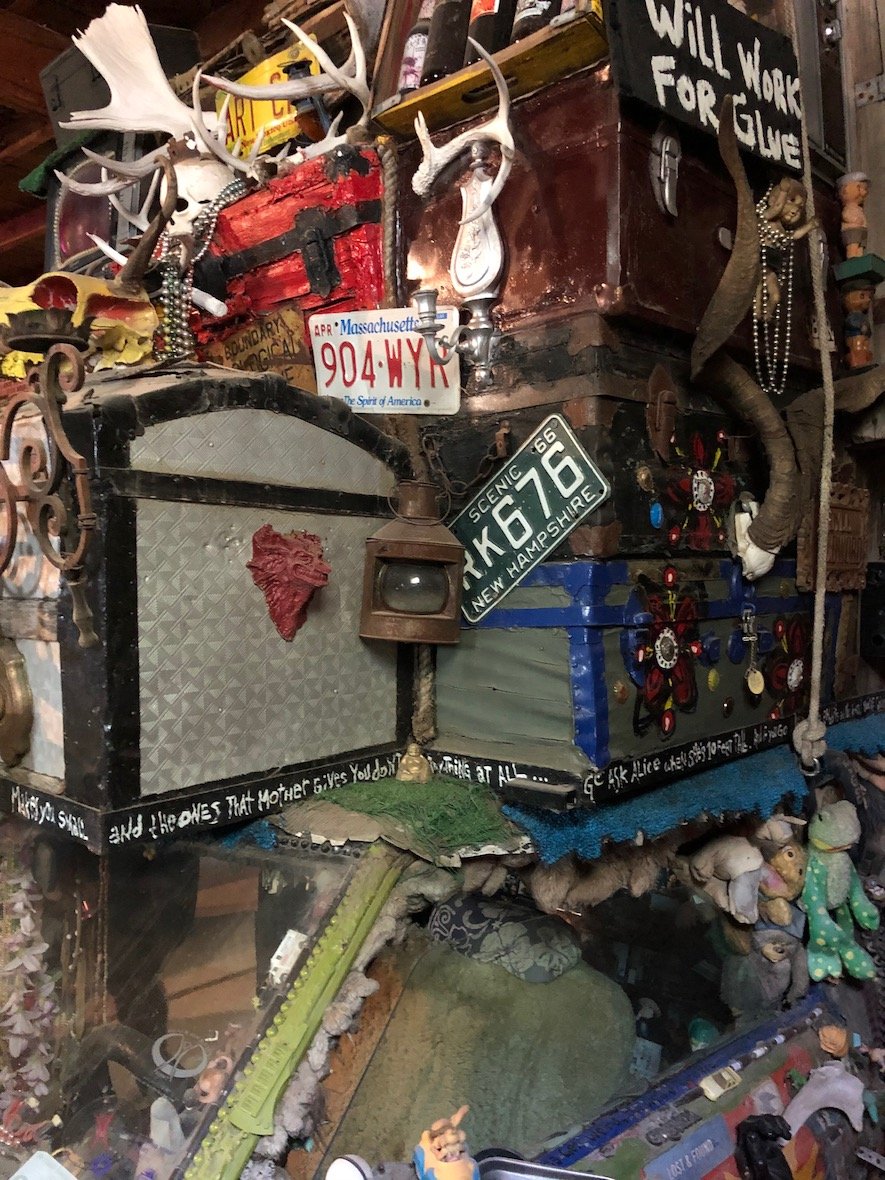 This one belonged to Hunter S. Thompson (1937-2005) entitled: "Fear and Loathing in Las Vegas" and it even has some of his ashes inside. 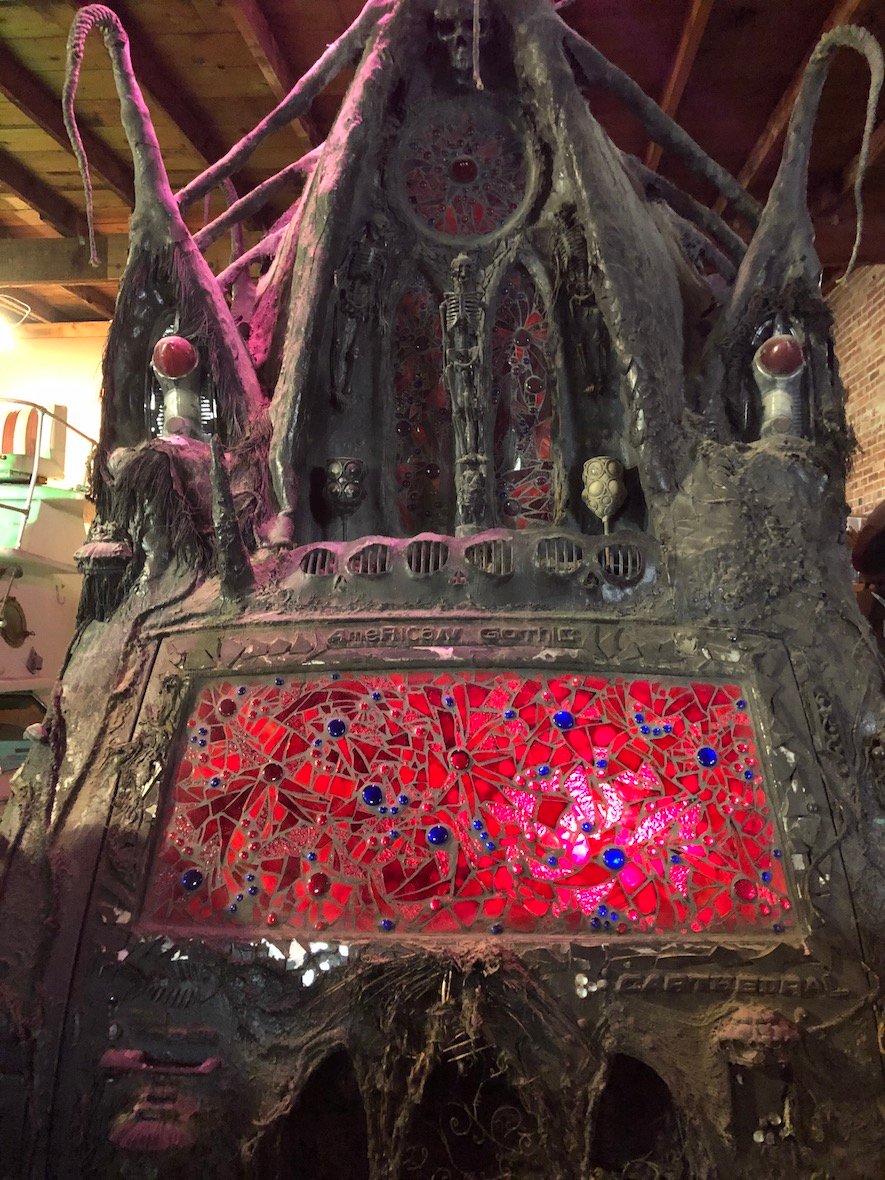 One of the cars was covered in antique cameras, and another was designed to look like a literal Gothic cathedral. The coolest part was that it was an “interactive museum”— meaning we got to enter the cars and take pictures and even honk the horns. 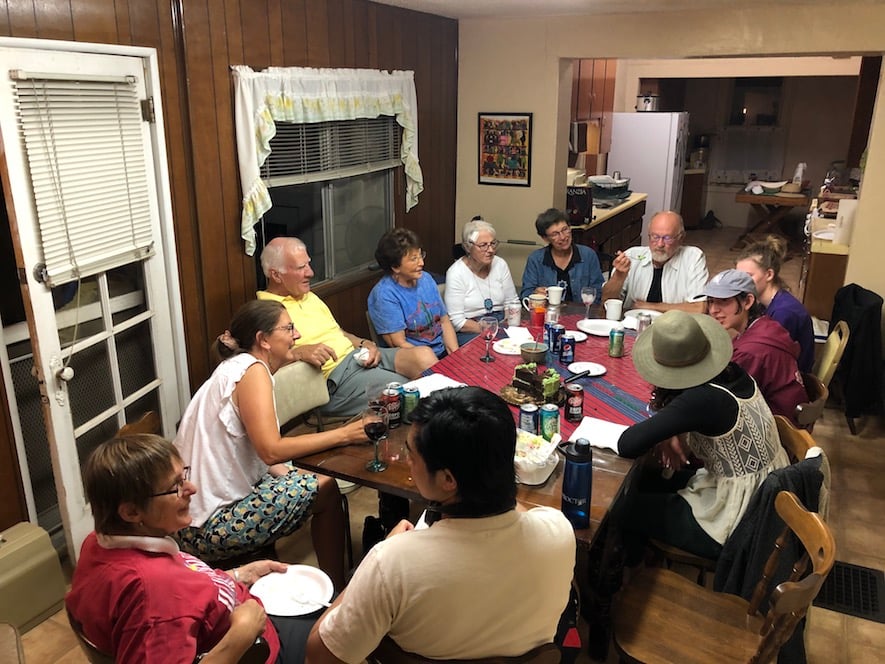 A lovely evening spent at the dinner table at the convent.... 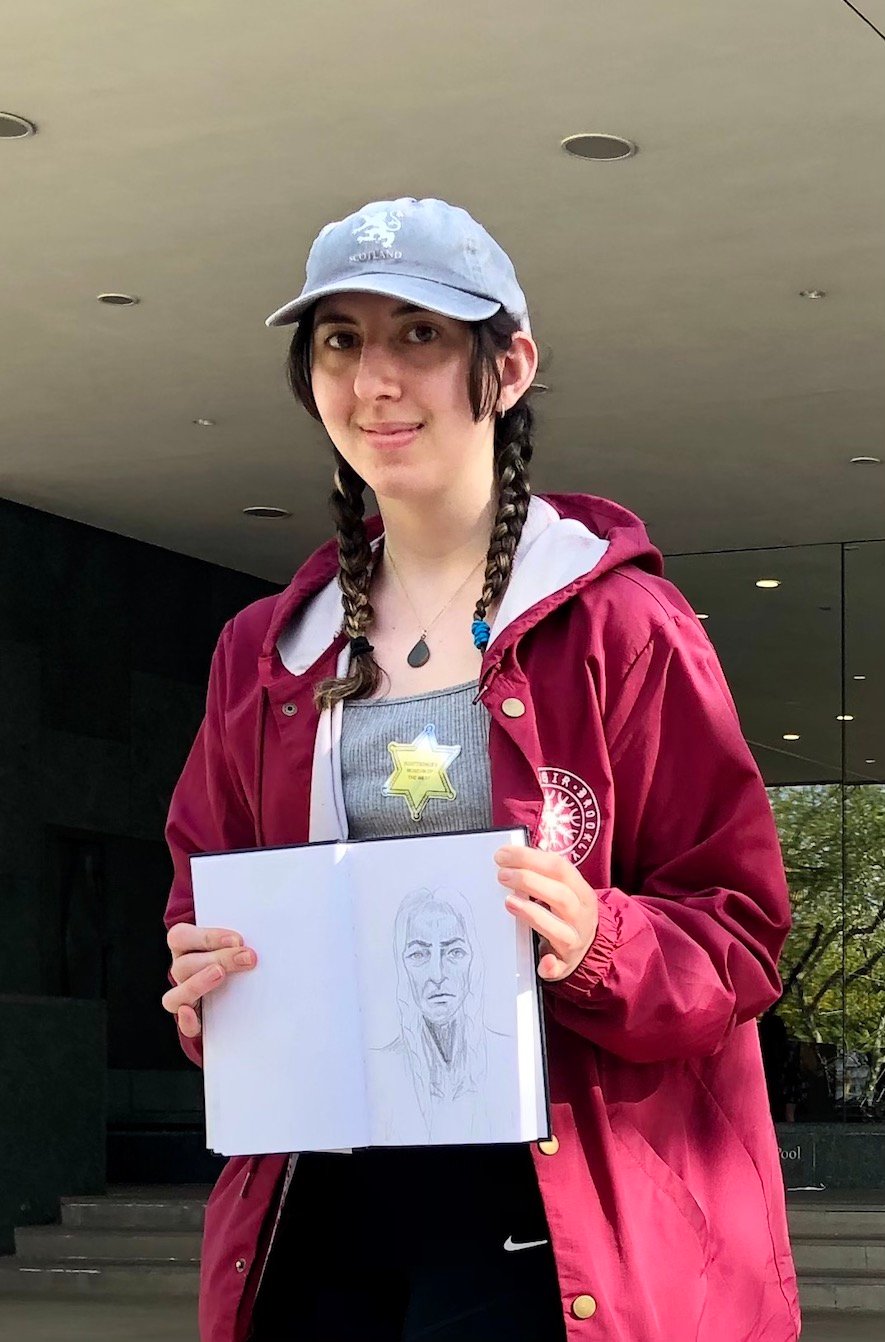 At around 9:30 A.M. on Wednesday I started off my day by formally accepting my offer to the University of Glasgow, which, needless to say, lifted a lovely little cloud of happiness over the whole morning. That said, the Kartchner Caverns were also pretty epic.

We didn’t actually see any bats, but there’s definitely something to be said about walking around in a charmingly illuminated 50,000 year old cave with a bunch of people you don’t know (and a few you do) at 97% humidity. 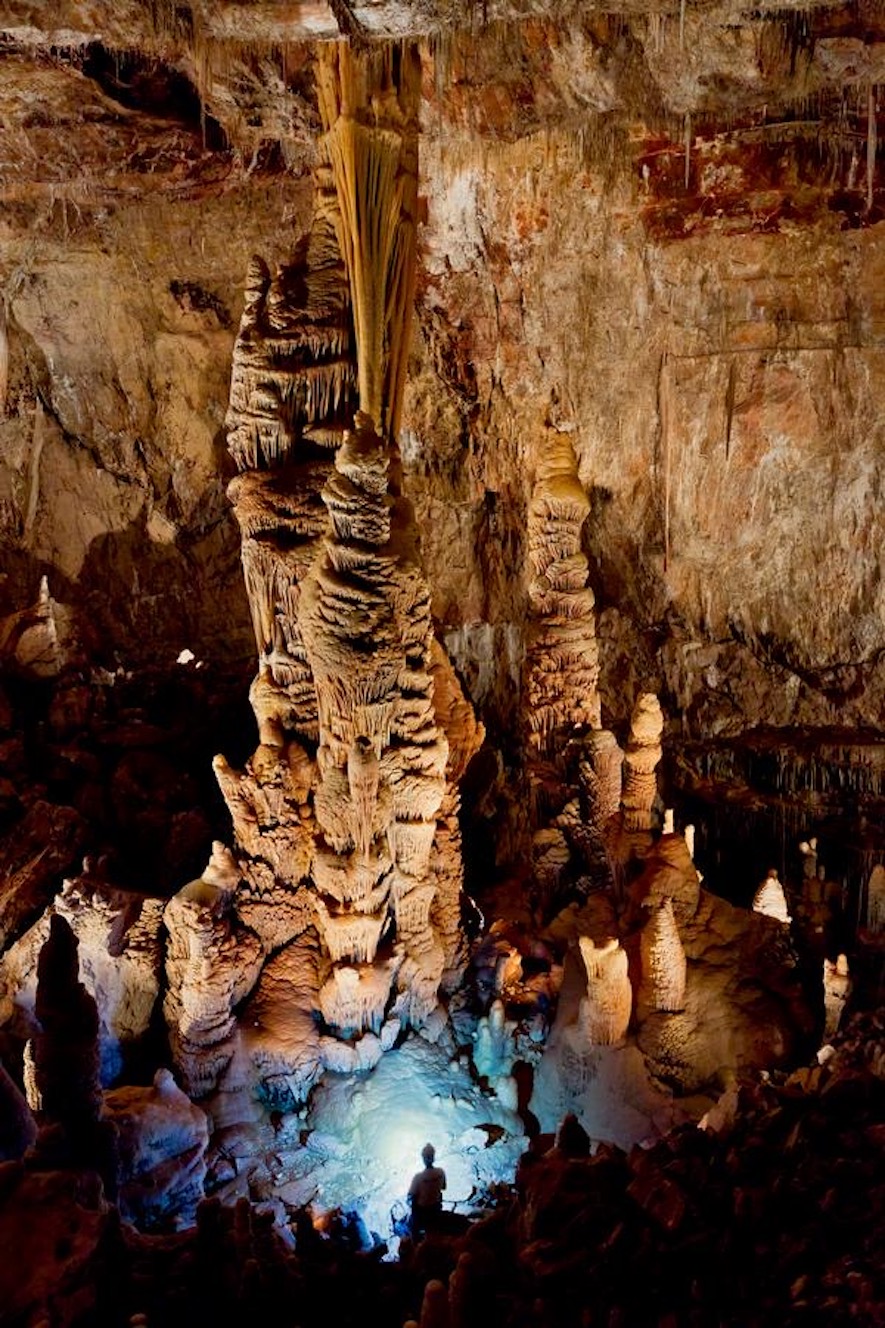 I’m convinced that Arizonians will turn prickly pear into anything. Chocolate, gummy bears, lollipops, honey, jam, jerky, gum— you name it, and someone will have tried to infuse it with prickly pear. I tried some prickly pear saltwater taffy, which… well, it tasted like bubblegum with lemon and salt… but… in a good way? 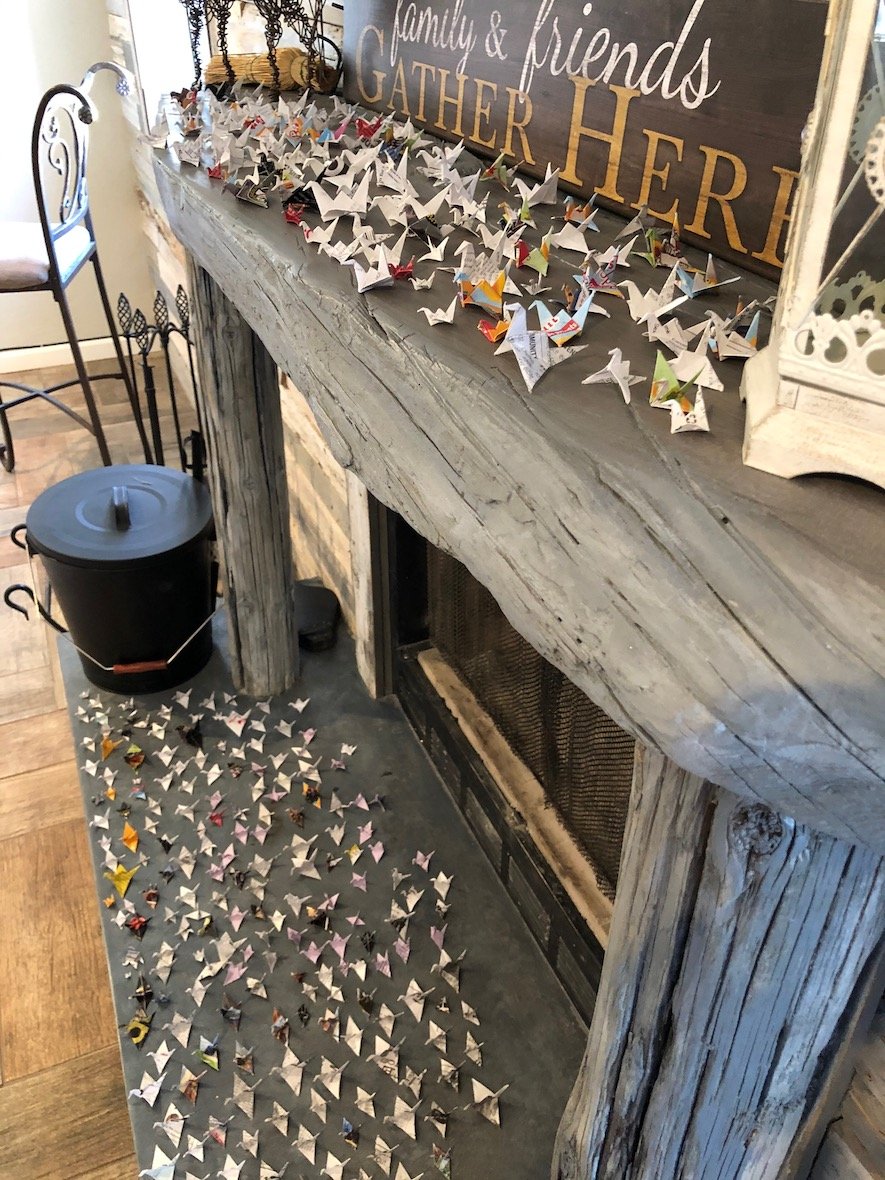 At an ambiguous point in time, and at a location unbeknownst to me, Toby and Jules made a pact to create 333 cranes in Sonoita and leave them at the Verbo House. They plan to make 333 more in Sedona, and 334 in Santa Fe. They have declined requests to teach prospective crane-makers how to construct the origami figures, but welcome anyone who already knows how to make them, or who otherwise learns. 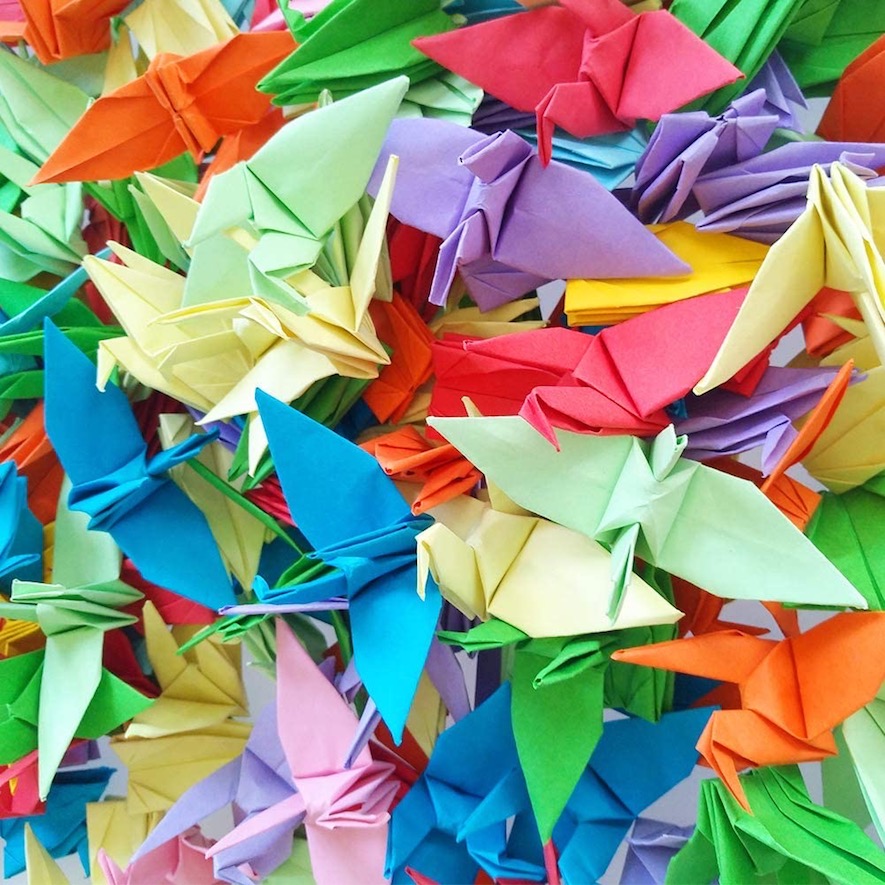 Later that night, Dave made the best defensive comeback that I’ve ever seen; serious foosball shark. Imagine a player coming into the game late and joining the opposing team, and for the first ten minutes they miss every shot that comes to them, and then all of the sudden… all of the sudden, two of us are wishing we never invited Dave to play. I still think he’s a hustler. 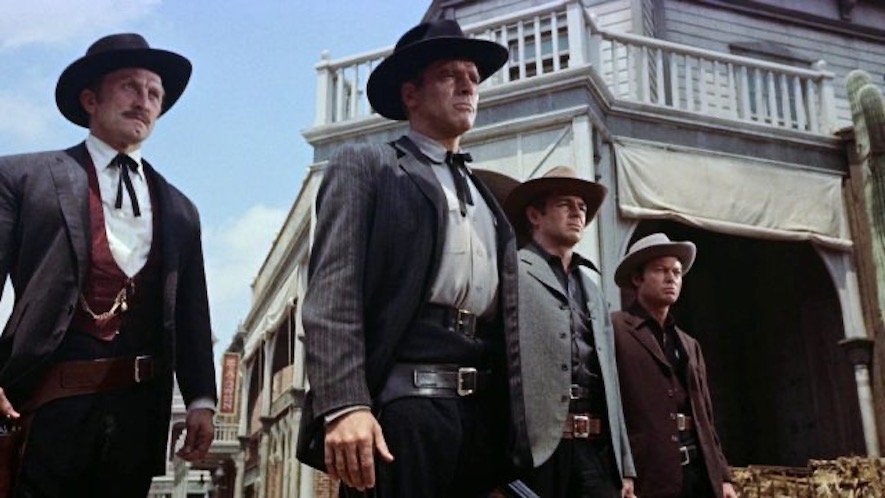 On Thursday we went to Tombstone, which is a little historical town where the Gunfight at the O.K. Corral happened in 1881. We got to watch a live reenactment with cowboys and guns— the gunshots made me jump every single time, and it got to quite a few babies in the audience as well. It was such a cool event to watch live, even if the acting was slightly questionable at times. 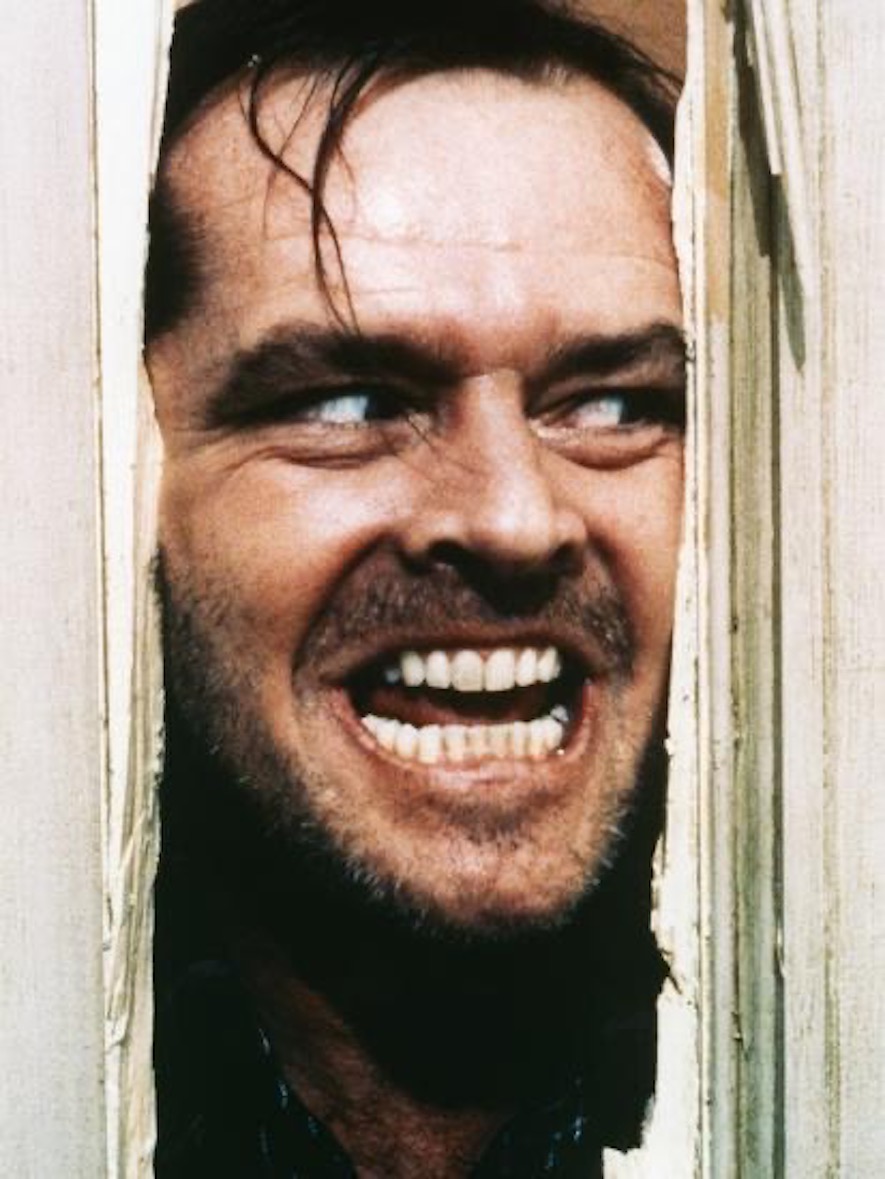 The water in the house shut off in the early evening, which is really not the best way to surprise a house of ten people. Dave went to investigate in the shed while Maxx, Jason, Maeve and I were playing foosball and all of a  sudden all the lights turned off. They came back on a moment later… and then they turned off again. The third time it happened, Maxx and I thought a slasher was going to break in, but in the end it was just Dave, who would put Jason, Maeve and me through an ego-related demise during foosball a short while later. 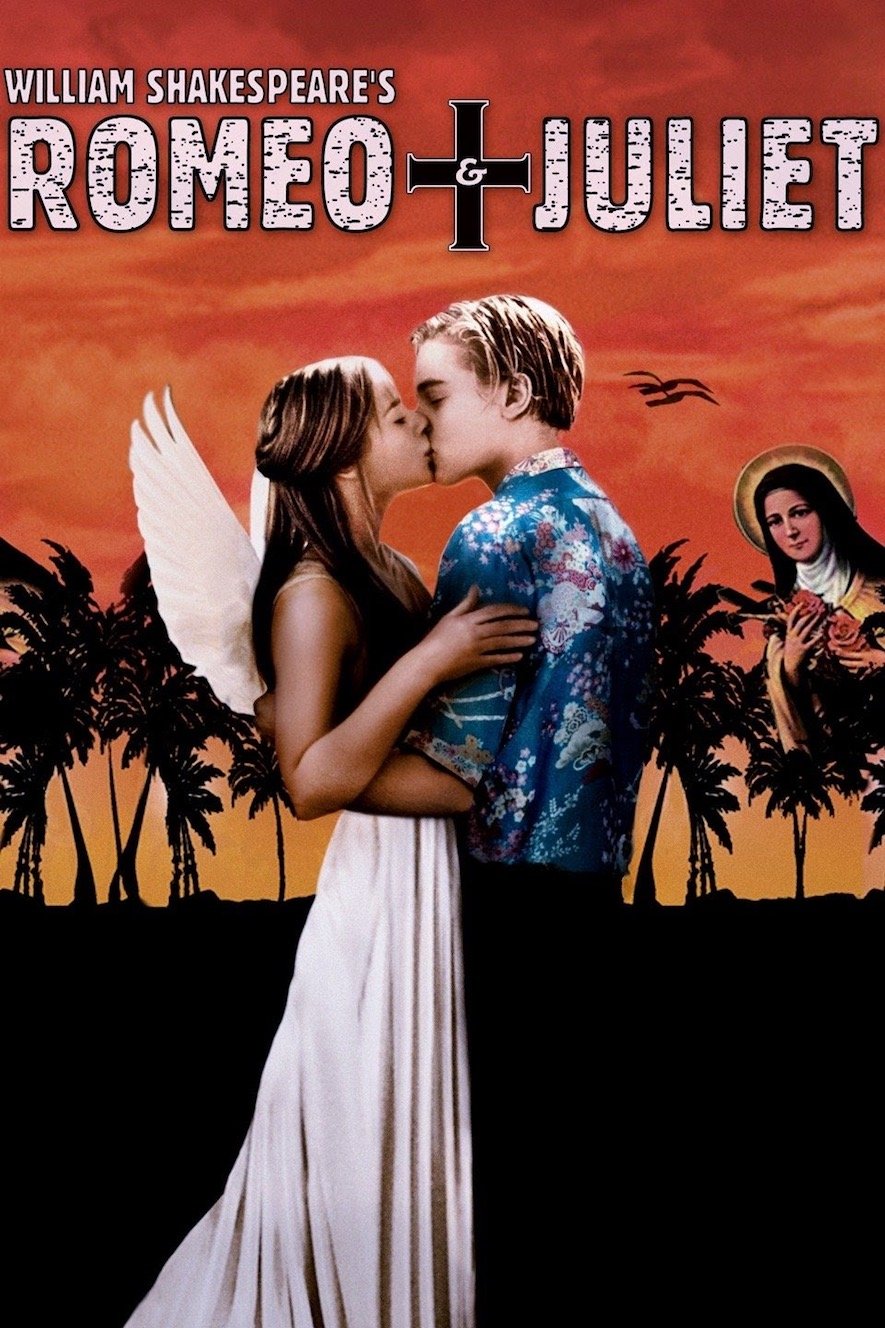 Later that night, Jules and I somehow convinced the group to agree on Romeo and Juliet (1996) as our movie pick. I imagine that uttering “young Leonardo DiCaprio” captured the interest of a few people. It’s a modern take on R&J, although the script is word-for-word from the original play— meaning that Tybalt still has lines like, “Do you bite your thumb at us, sir?” while they shoot at each other with guns called Swords. While I can’t say there was any genuine actor-to-audience empathy occurring, it was still really hilarious in a secondhand embarrassment kind of way. 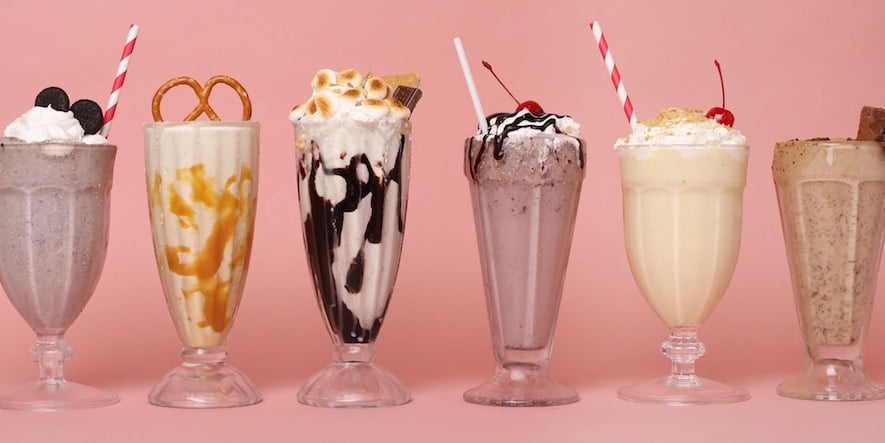 Dave and Jen made us much-needed milkshakes a little over halfway through (for context it’s when Romeo and Juliet get married after knowing each other for an impressive one day), which turned into a whole apré milkshake cleaning fiasco seeing as we still didn’t have water. But it was really funny, and that was enough for me. Thankfully the water turned back on in the morning so we could all brush our teeth and fill up our water bottles— but then it was time to leave! 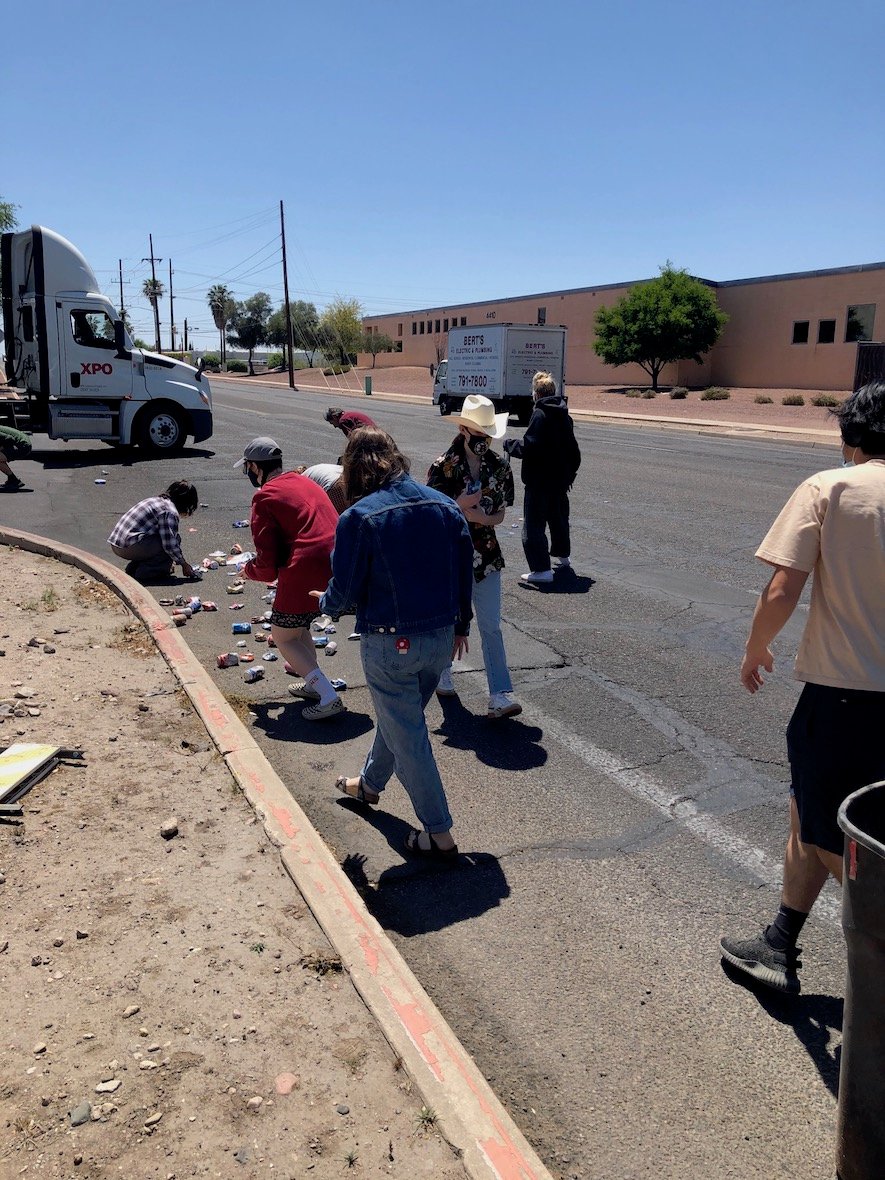 By the way, this was our community service day in Tucson, helping this poor soul who's recycling of cans flew out of the back of his truck. Hundreds of cans flew across the road and we made quick work of it.  Luckily a patrol car stopped and with lights flashing and helped us remain safe.

Our first week-long excursion left nothing to be desired and I look forward to the next one! Sonoita was really cool.