Mountain Classroom: A Visit to Red's

Following Mountain Classroom's week long journey up the Mississippi River, they spent two days in Clarksdale, MS visiting with high school students before touring William Faulkner's home and Rowan Oak.  They then traveled to visit a politics professor at Ole' Miss before making a stop with river ecologists at the USDA research station in Oxford, MS. As the group breaks for two weeks, Avery '16 leaves us with this reflection from Clarksdale.

"WELCOME TO MISSISSIPPI: THE HEART OF MUSIC," the sign read as we crossed the border from Memphis almost a week and a half ago. Because we have been exploring the Delta firsthand in the backcountry, there hasn't been a chance to test that claim out. Then we went to Red's.  It was our first night back from our river trip, we had been paddling that morning. Clarksdale is the heart of blues and Red's was a quintessential juke joint down the block from the Quapaw Canoe Company.

From the outside you could barely tell the building was still in use. The windows were boarded haphazardly, and the tin roof was rusting out on the edges. The only sign of upkeep was a whiteboard with "Big A" written on it and a large capital R nailed to the door out of beer cans. You could walk right past it and not even know it existed, but you'd have to be pretty deaf.

As we entered, I was overpowered by the music and it took me a couple seconds to get my bearings to see what else was around me. When I did, I saw that the room was warm and well taken care of. String lights were everywhere, and tinted red ones were hanging from the ceiling, giving it a dim atmosphere. Tables and chairs were strewn around, the stage was a rug with some microphones on it, and directly across from that was Red himself standing behind the bar with an intent look on his face, listening.

The music was thick and sorrowful in lyrics and tone, but its beat and its singers were playful. It made you sad, but at the same time I could not fight the urge to start dancing. At the end of the first song, nobody said anything. Nobody clapped.  We were all awestruck until Big A said "It seems a little too quiet in here. Red, do you think it's too quiet in here?" We got the message and began whooping and clapping. As the songs continued, everyone in the room was engaged, making it clear with those tiny movements that give away how in tune someone is with the rhythm. 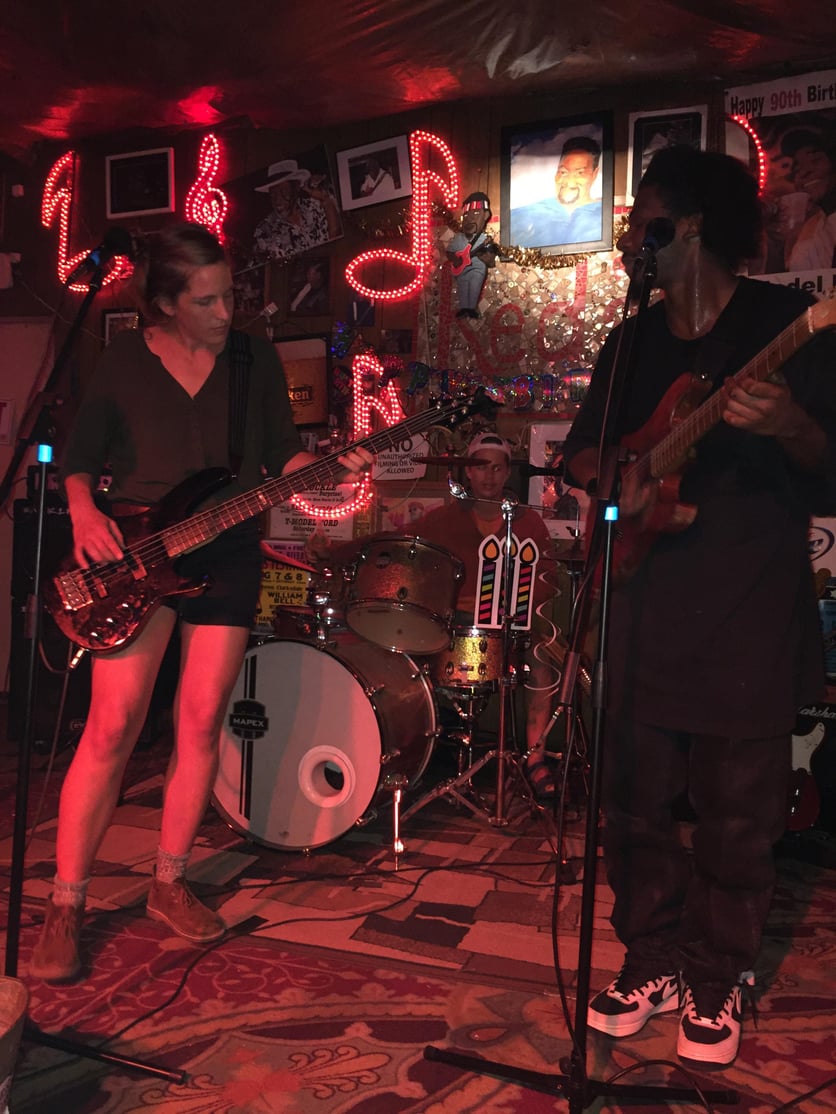 When Coco and Max started playing with the band on stage a couple songs later that was the last straw. We sat, captivated, until they finished. As the night progressed, we couldn't help but trickle out onto the dance floor, and by the last song everyone was showing off their moves.  Red's gave us an experience that night we won't forget any time soon. The slogan above the door stated it simply: "Red's: It Is What It Is".