Proctor Academy's Mountain Classroom program has been off the grid for the past two weeks hiking in the Grand Canyon. Check out Frances' reflections from the group's first week of backpacking in this week's blog and stay tuned for more updates from the group soon! 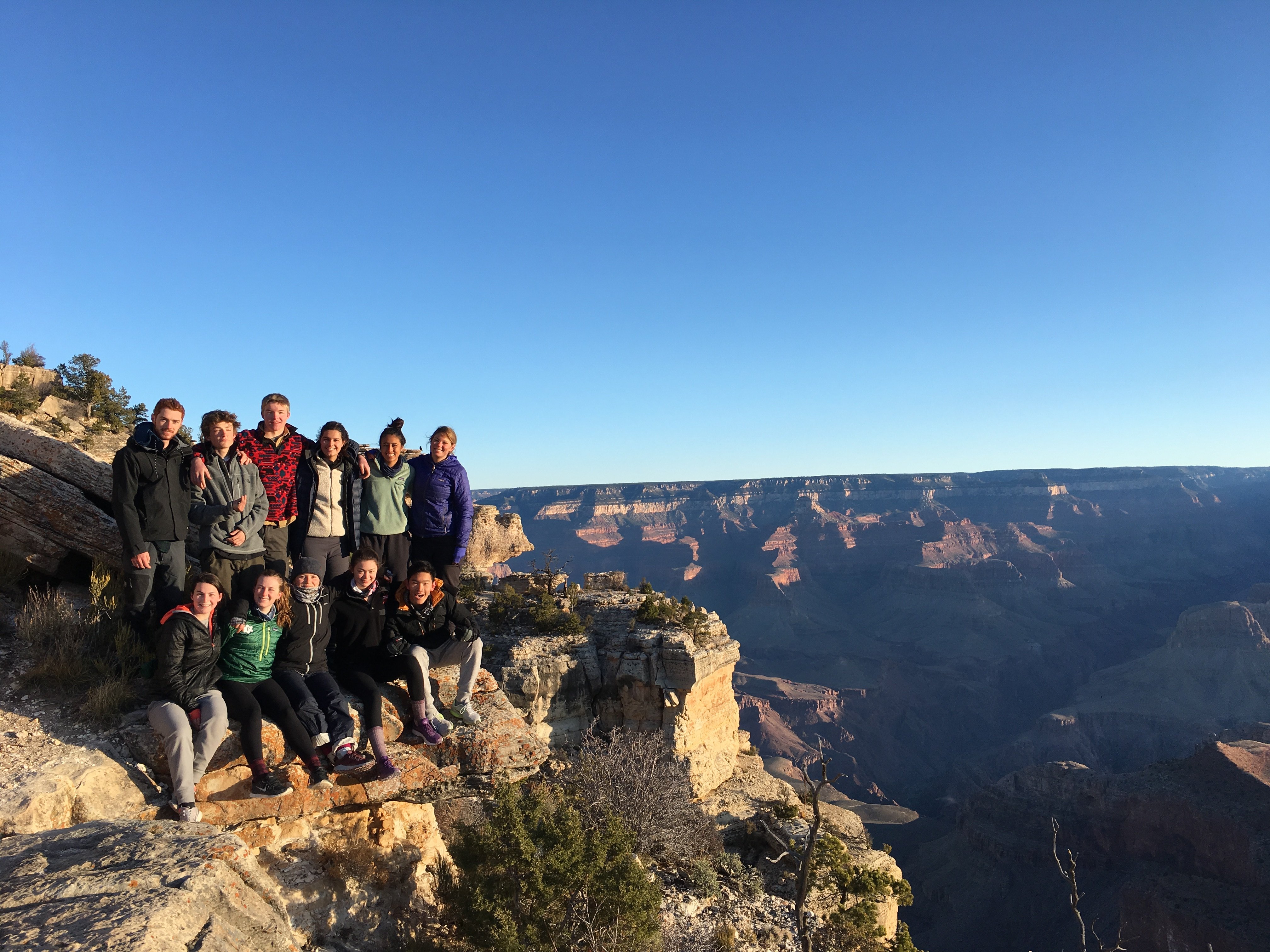 Upon our wakeup after a cold night of sleeping under the stars outside our bus Debbie, we packed for the adventure of a lifetime into the Little Colorado River Canyon. Though one group forgot the pump to their stove, which is a vital part of making the stove work, we set off for our 4 mile hike to the river at the bottom. The trail head of the historical Hopi salt trail looked down upon a climb that looked like a rock climb instead of a hike, followed by a short walk to the river at the base of the head wall. 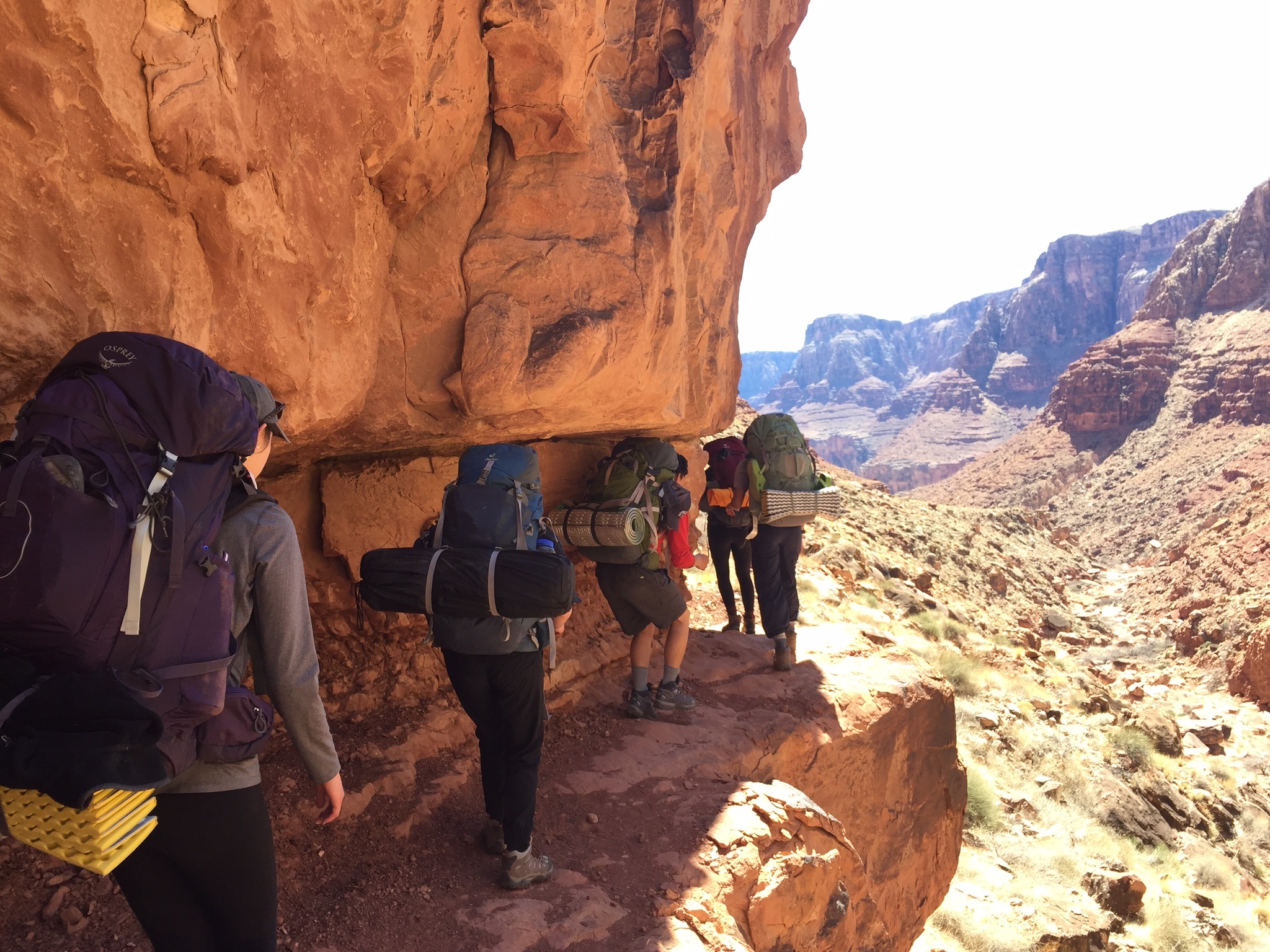 I started our trip with “Oh, we’re just walking to the river”, but after 1 hour of steady walking and pack passing down a steep rock face my mindset changed to “oh my gosh we are going all the way to the river!” Soon enough after a couple water breaks, lunch breaks, many rhyming and not rhyming verses of down by the bay, and lots of classic 2000’s songs sung from start to finish by the boys the 7 hour hike flew by in what felt like minutes. Though the hike flew by in the hot desert sun we all needed something to look forward to, so Kiara and I constantly thought about the salt that we would find at the bottom of the trail that was desired by Hopi Indians. We even managed to lick many of the rocks on the way down to test for salt.

Just as we arrived we all dropped our packs with a sensation of accomplishment and relief and prepared for the well deserved swim. The river with a thick layer of sediment made from calcium deposits, was a milky version of the water one would expect to see in the Bahamas. We all splashed into the river and cooled immediately. Just as we started to cover our bodies in the thick, smooth, white, mud from the river two men hiked by us to inform us that they too were camping in the same spot as us and were scientists surveying the river. 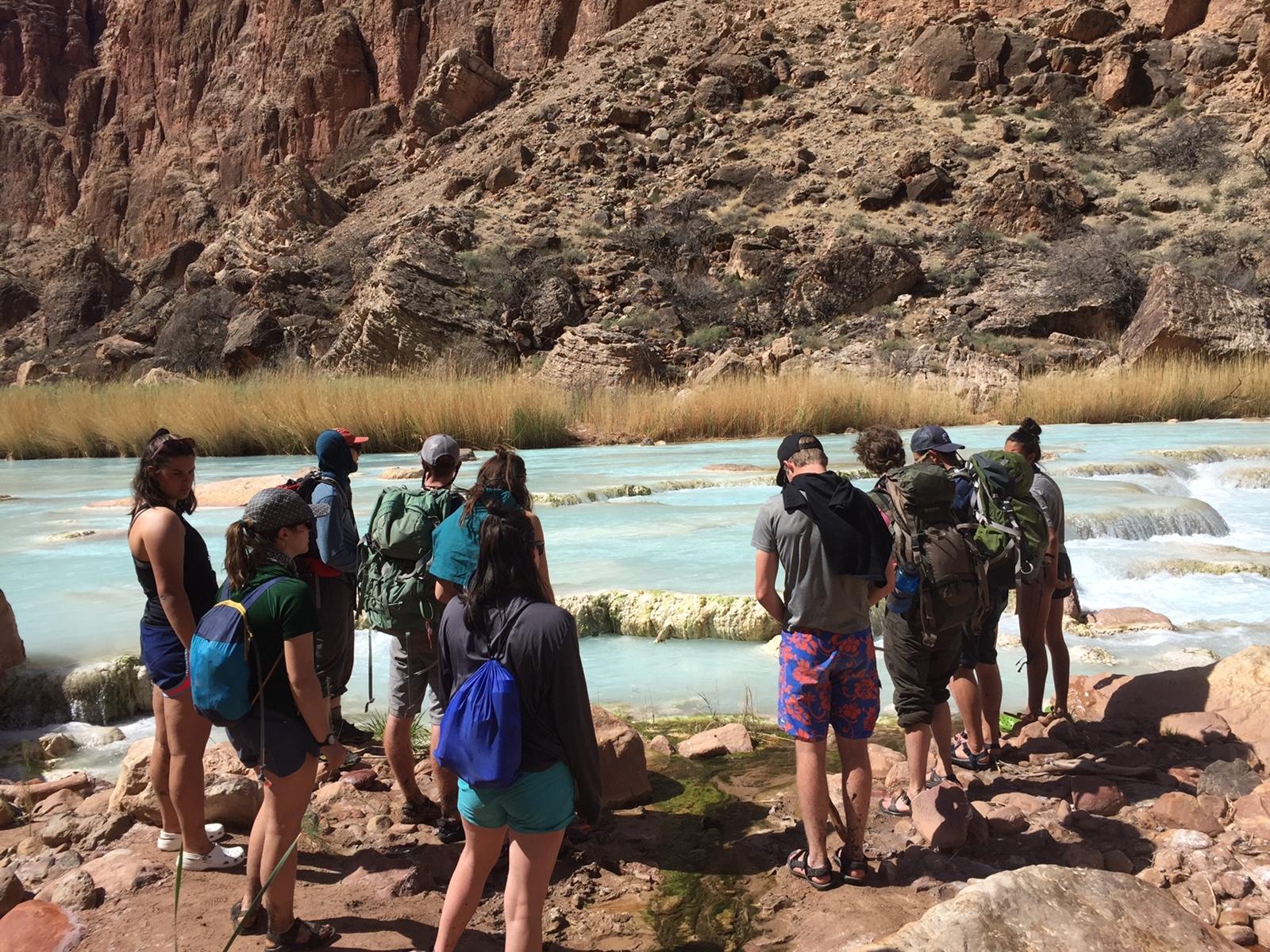 After a long day of hiking in the warm sun we cozied up by putting on warm clothing layers and chatted with Dave, the scientist, about the endangered Humpback Chub. He informed us that this was the only fish in the world with a lump on its head and his goal was to find out why. Not only did he teach us about this animal but when he caught them Dave brought them over to our campsite in a bucket to show us, it was super cool.

On our second day we ventured upstream upon a path aside the river bank to have a chill day swimming and learning about the nature around us. Sophie spotted a slot canyon across stream and we all took a quick swim to get there and then wandered through the thorn bushed makeshift trail into the shady canyon to realize that we were probably going to be the only Proctor Mountain Classroom group to ever explore this part of the Earth and we might have even been a portion of the few to ever explore inside it. To remember this we created a Cairn (a rock pile) of a Number 1 shaped rock and lots of rocks that looked like hearts surrounding it. 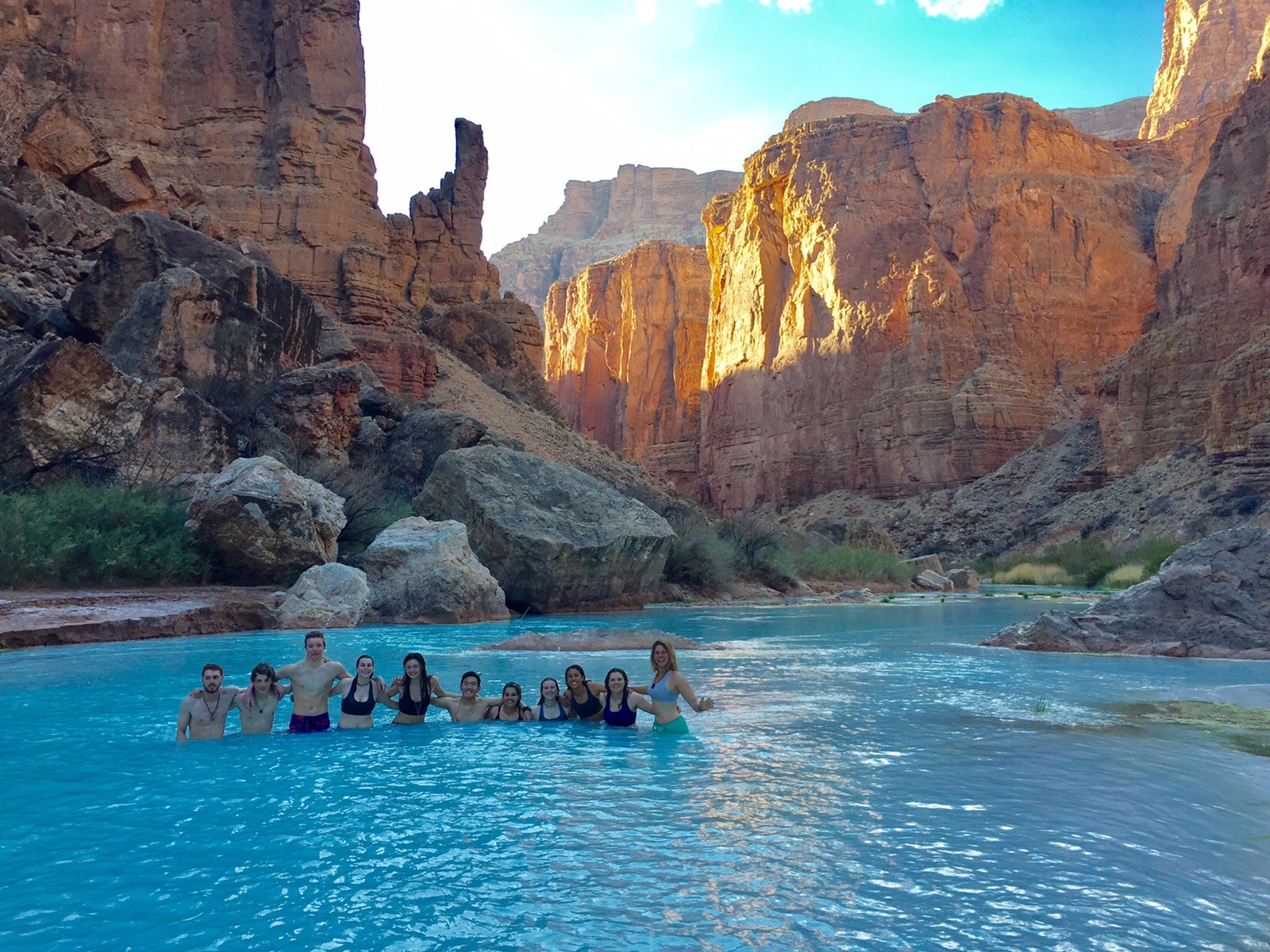 After walking back from the slot canyon we hiked into the Emerald Pools, an area with two steep rock slabs with emerald green slime covering the walls and water running over them, each into their own pools creating two levels of the oasis’. Here we finally found the long desired salt, crystalized on the walls surrounding the pools. Though we didn’t take any with us, licking the walls was a sensation I had desired the entire trip down, and this was the saltiest salt I had ever tasted. 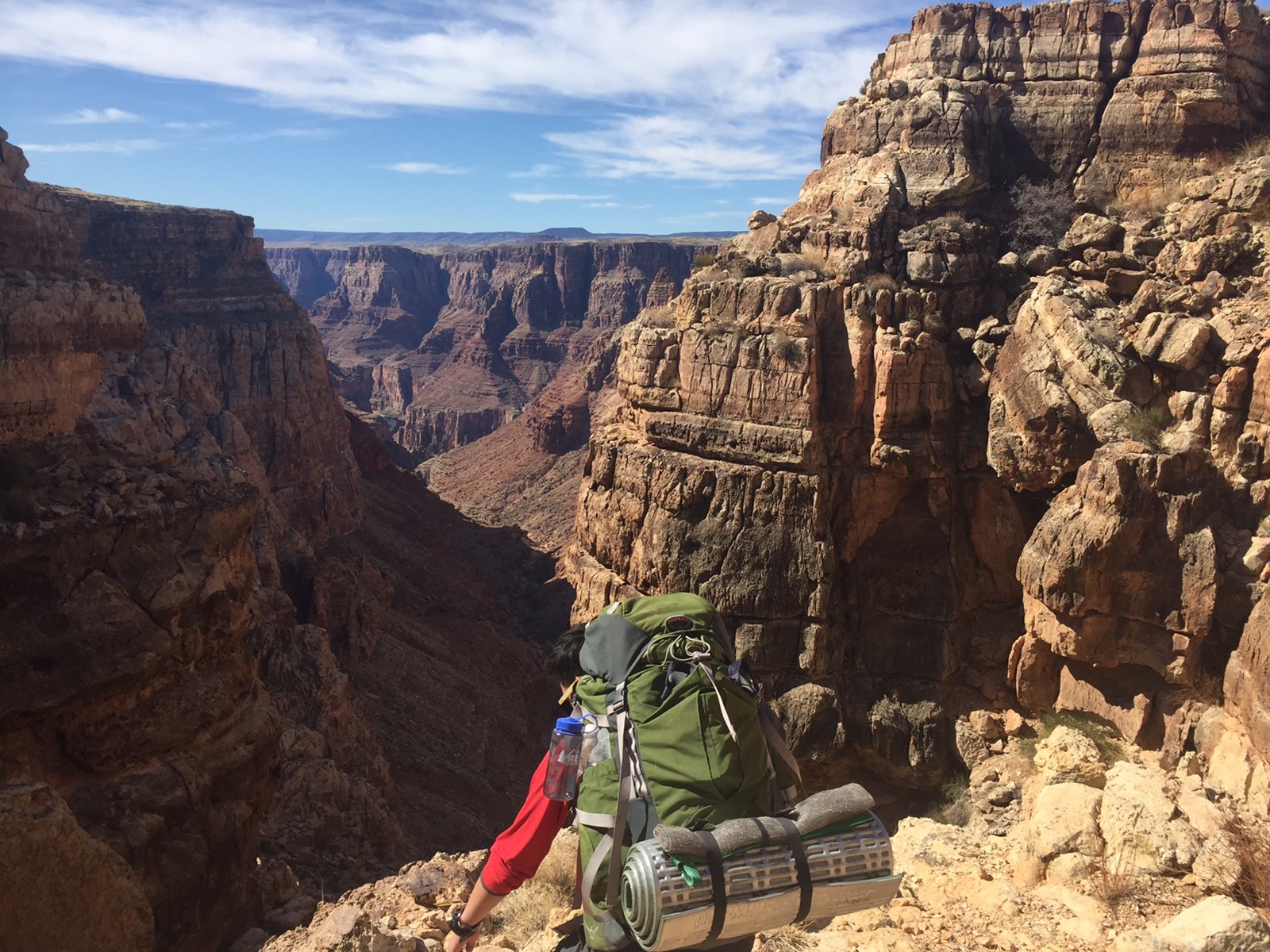 Our last day was spent climbing out of the paradise that we had started to call home. Because of the time it took us to climb down, as the Leader of the Day, I made an executive decision to carry as much water as we could and dry camp half way up to split the climb into two days. For the first half of the trip we took an unexpected, different route, back up out of the canyon in the blazing mid 90 degree heat and quickly arriving at the campsite because the whole time we paced ourselves keeping in mind Alex’s classic saying “Slow is smooth, and smooth is fast.”

With spirits high, our group made the executive decisions to take a break in the shade and finish the hike in one day, so we did. When we arrived there was a sense of euphoria that surrounded the group as we hooted and hollered and of course, licked the last cairn at the trail head, just as the sunset sank under the horizon to conclude our first backcountry expedition. 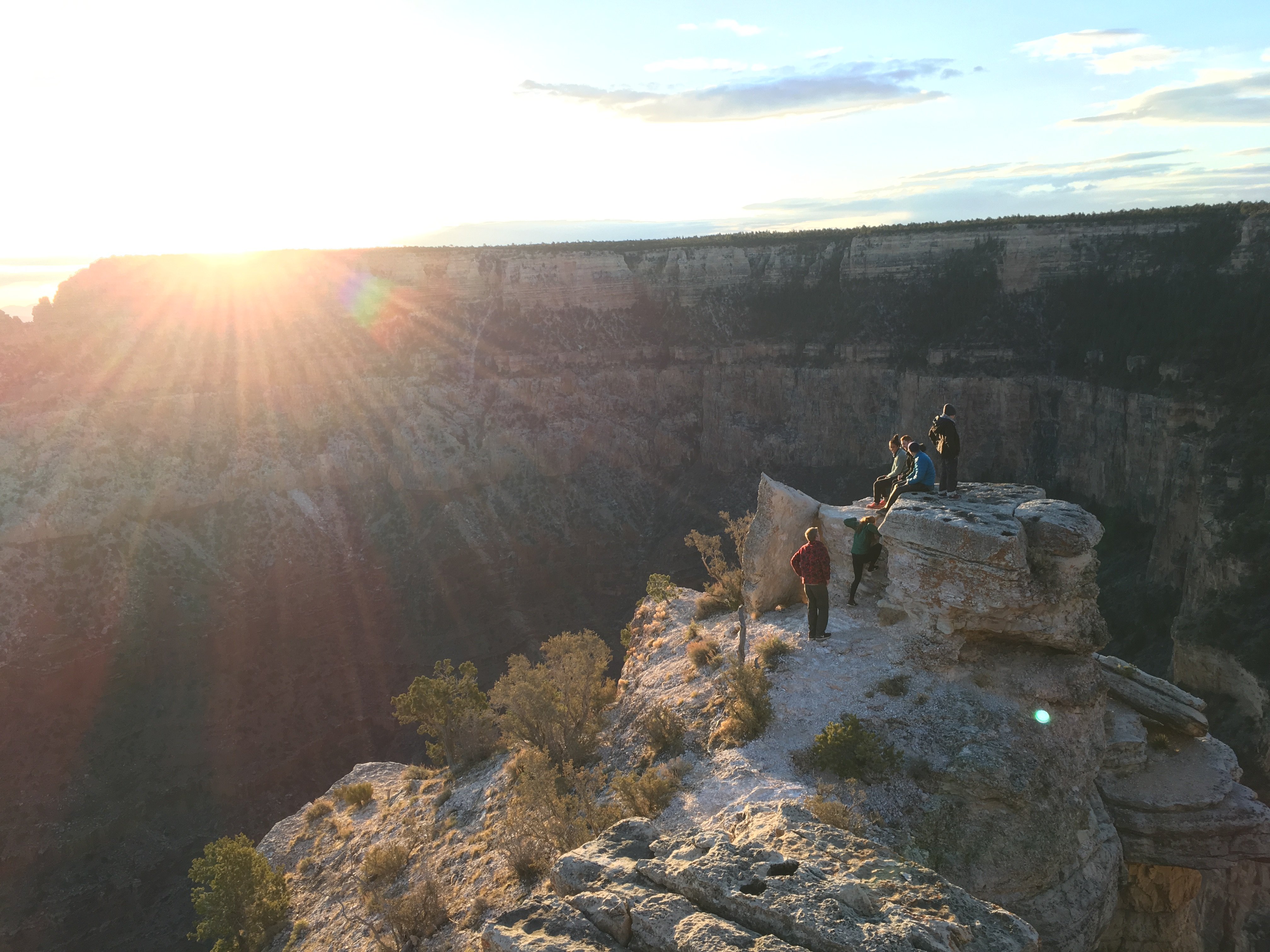