Mountain Classroom: All the Moods of the San Juan

No two days are alike on Proctor's Mountain Classroom program. Whether it is climbing the tallest peaks, driving the windiest roads, or rafting down the San Juan River, the lessons learned on Mountain occur through the experiences themselves. Take a seat beside Ada '22 and Hays '22 as they raft the San Juan River alongside eight of their best friends and four river guides. The lessons of the river are powerful. 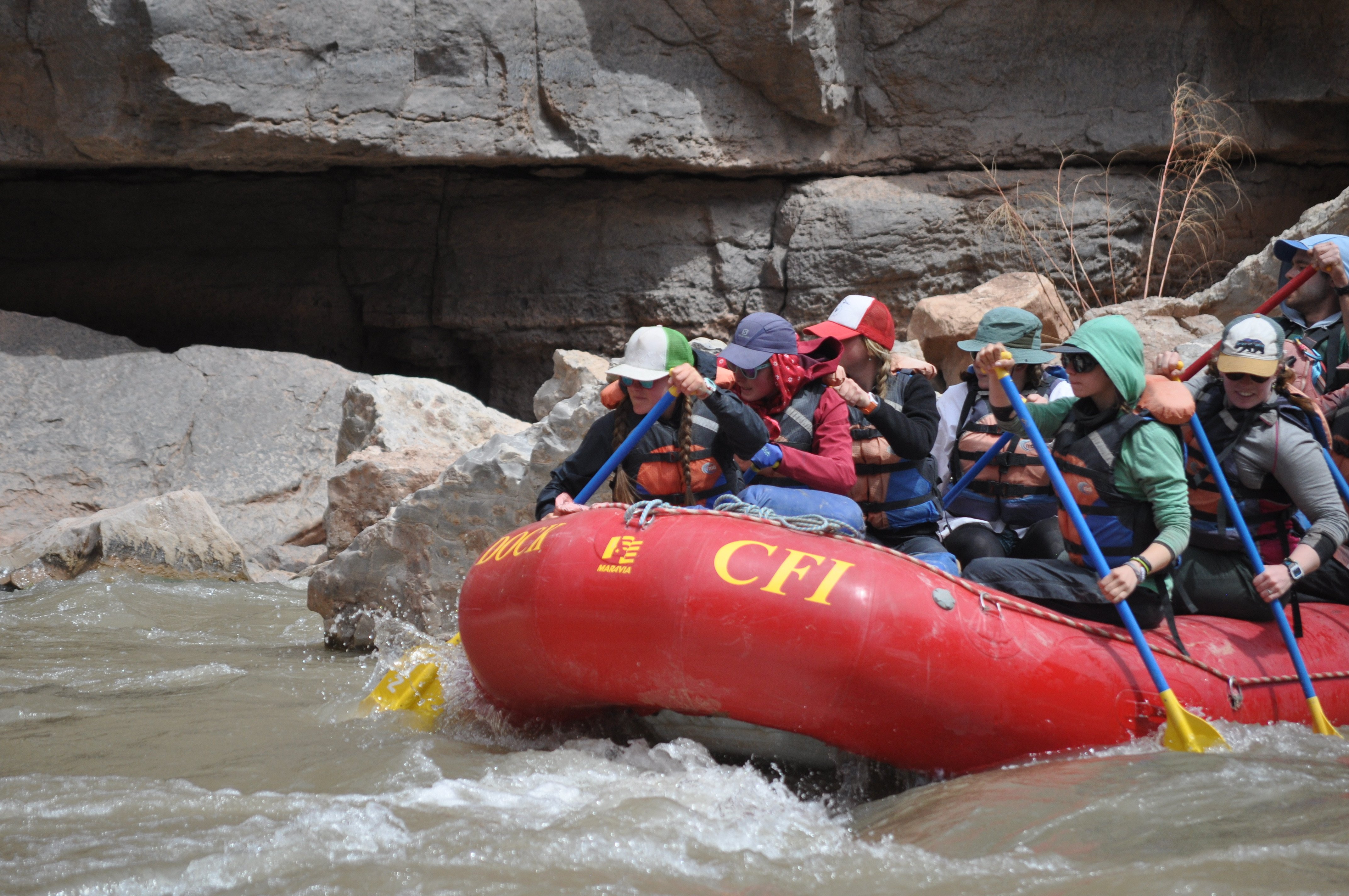 Even after waking up to tents full of red dust, Sunday morning brought excitement for a six night venture down the San Juan River. The first day included flat water and less than six miles to camp. As we sat in a circle around a tea candle for evening meeting, we were all feeling out of place: a new environment, new systems, and new people (Kami, Lena, Liz, and Brennan), but the night was beautiful. Day 2 brought out another side of the river, 13.5 miles and a few class II rapids between us and our proposed campsite. The morning went by smoothly, but after lunch the wind picked up force pushing us back up stream. We had to work together in the paddle boat using all our force and forward momentum of leaning to make progress. By the time we pulled into camp just before 5 we had been on the river for 7 hours, listening to commands, navigating rapids, and fighting an upstream current of wind. Everyone was worn out but the day was not yet over. As the wind increased intensity, flinging sand into the sky like a dry blizzard, we unloaded rafts, changed out of wet clothes, set up tents, and storm-proofed anything and everything. To bring the group back together after a long day, the leaders of the day, Stew and Hayse, called us all into the four-person tent for a feelings circle. Everyone felt drained. Not only was the paddling hard, but there was an added component of figuring out group dynamics with 4 new people. For a group as self-reliant as ours, having uncertainty in our roles and responsibilities was a challenge. We separated to prepare for dinner comforted by our shared feelings.

Alana and I helped Kami cook dinner, which involved extreme balance while “shopping” through the coolers on the rafts in a gale, catching blown away knives and coming up with creative ways to keep sand out of food. Despite our best efforts, as soon as the plates were filled with spaghetti the sand followed. Dinner was quick at best and dishes even quicker. The 10 of us gathered in the four-person tent once more for evening meeting. Sand blown in through the mesh coated us, the walls caved in on top of us, and we went around the pile expressing our appreciation for each other. There were laughs when Carol asked where Stew’s body was and someone pointed out that Lucy was wearing sunglasses in a dark tent, to which she replied “I’m going to sleep with them. They keep the sand out.” None of us slept well but day 3 passed uneventfully. So did days 4 and 5. 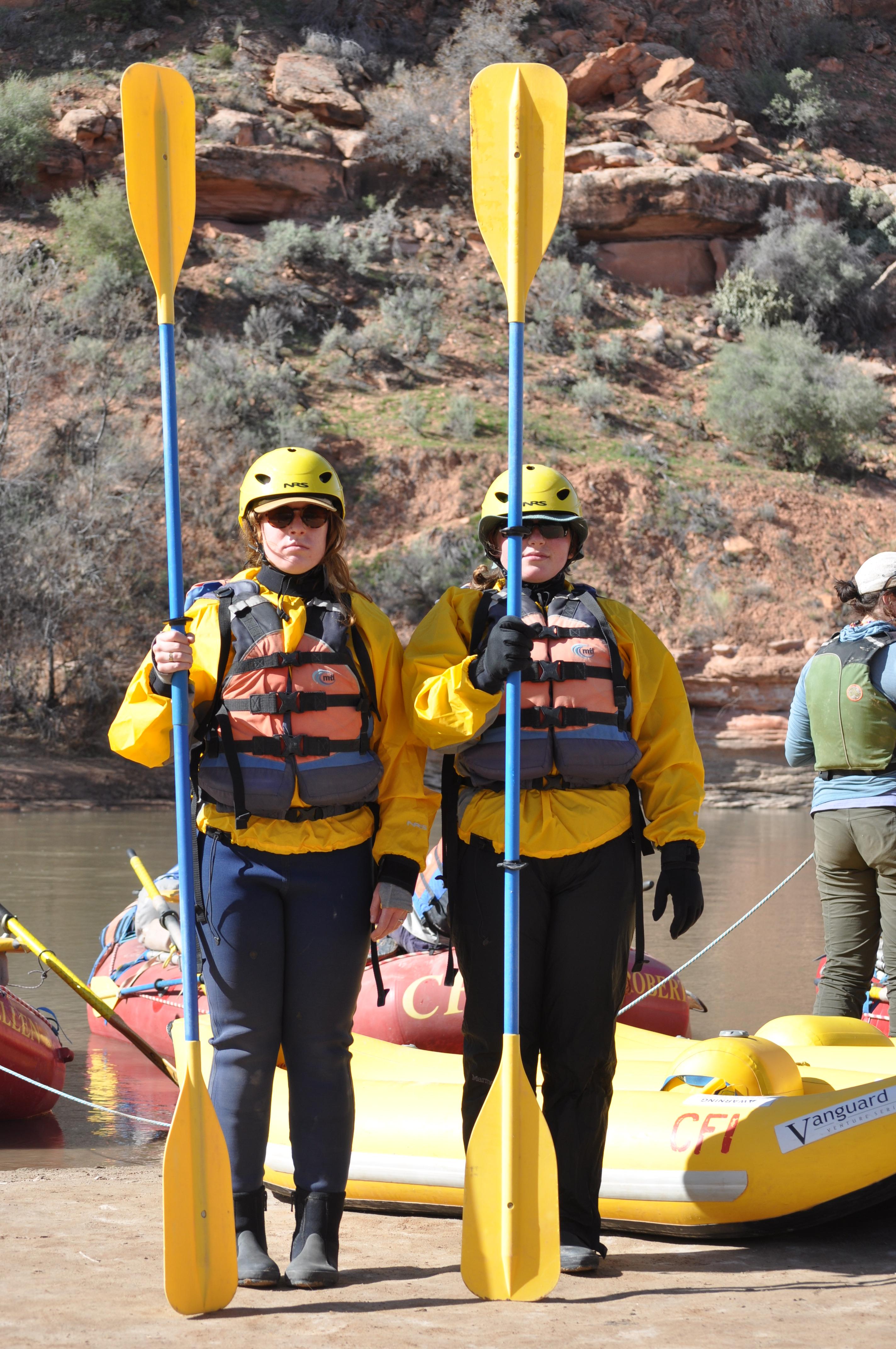 We woke up Friday morning, day 6, knowing that we would have to push hard to get to Government Rapid early in the day. Government is the biggest of the rapids on this stretch of the San Juan and the guides wanted to make sure we got there with enough time to deal with the unexpected. Low water riffles that pinned boats meant that it was after lunch time though we had eaten only one small granola bar since breakfast when we pulled over to scout the best line. We talked through WORMS: water, obstacles, route, moves, safety as we observed the jumble of rocks. 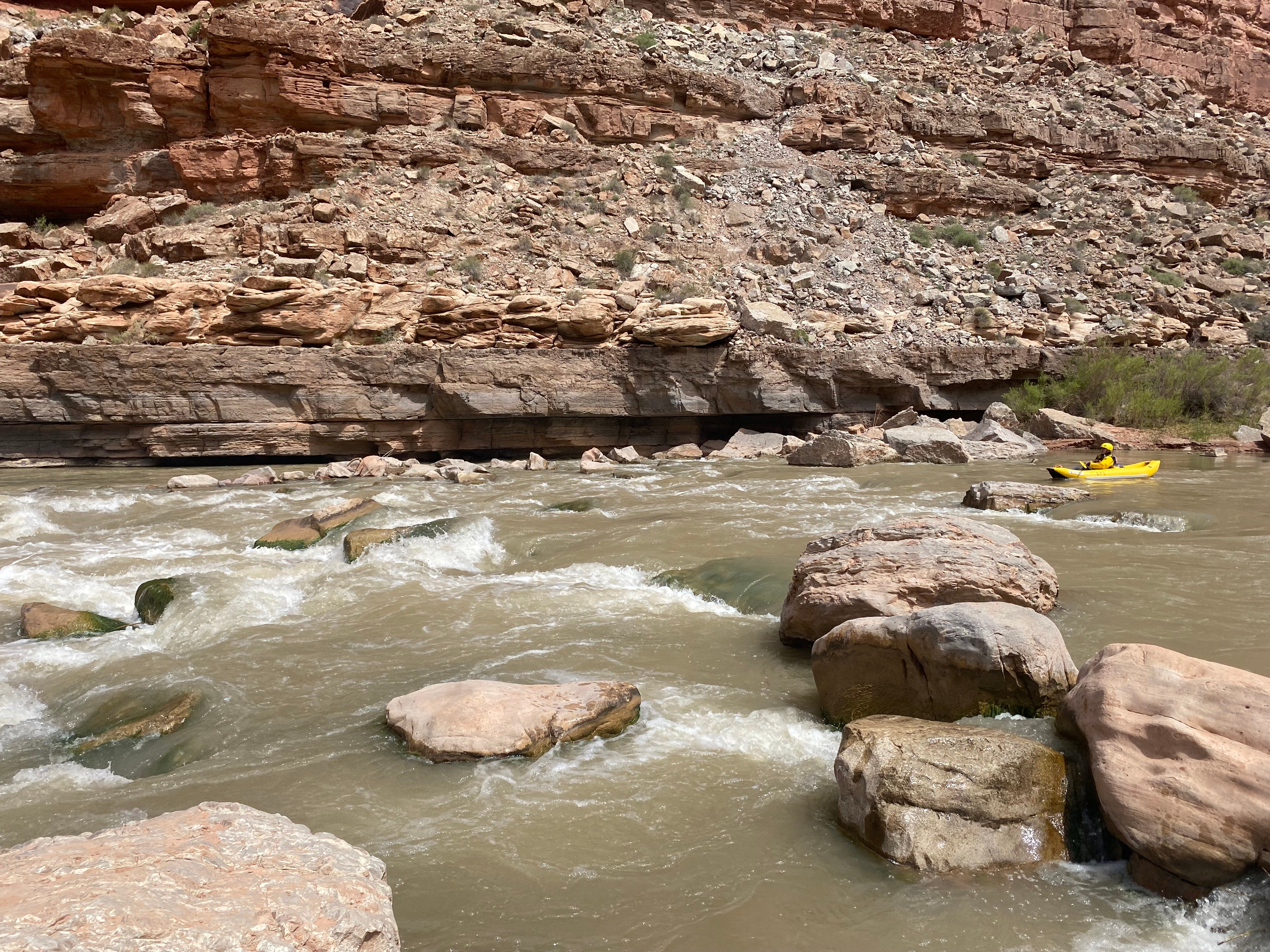 Lena went first, setting up nicely for the entrance, she made it smoothly through most of the rapids, getting hung up only for a minute on an exposed boulder near the end. Kami went next, taking a good line that narrowly missed the boulder, at which point she celebrated and crashed into the opposite rocks but made it safely to the bottom. The Duckies–inflatable kayaks–went next: Gunnar, with a huge smile, looked like he was trying to hit as many rocks as possible; Carol had the best line of the day, missing every obstacle. Next was our turn; we took our places, jamming toes under the inflatable thwarts for stability. Brennan steered us towards the entrance, called for an “all forward” and we were in. “Stop.” “Left side back, right forward.” “All forward.” From my seat near the front it looked like we were heading straight for the big boulder when Brennan yelled, “All forward.” 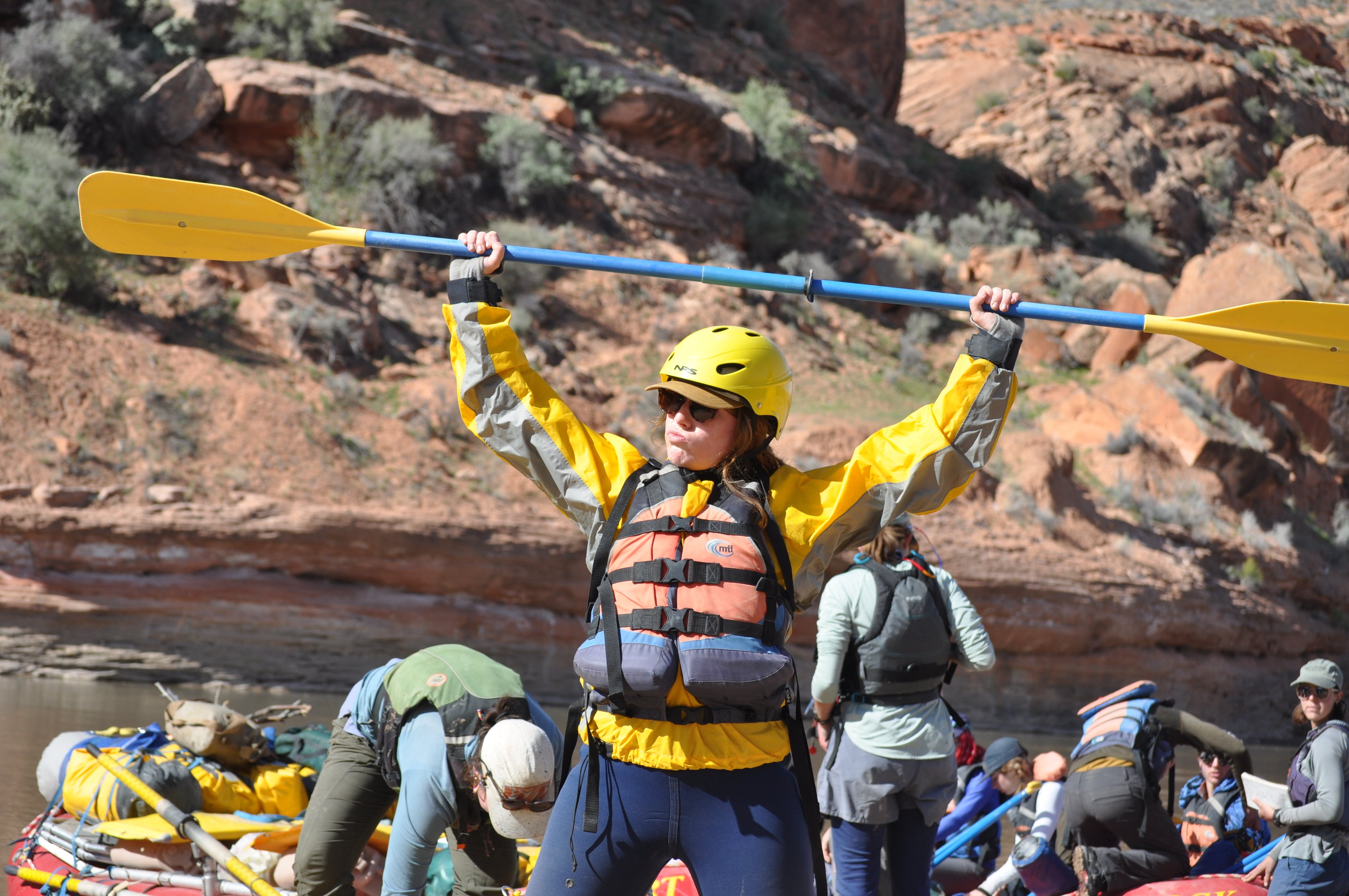 And then we were on top of it, water rushing all around us pushing us into the rock. I looked over to the shore where Gunnar, Carol, and the other guides were standing holding camera and throw bags, all with a look of shock, fear, and worry. Brennan worked through the stages of swift water rescue: paddling backwards, pivoting, rocking the boat. None of that got us anywhere so we started redistributing weight–one by one we each moved further back till we were on top of each other in the rear quarter of the raft. Water started flooding us and we all held on to each other, the paddles, and the raft. Brennan jumped out the front onto the rock and lifted the raft above his head amidst screaming. Once we were at a suitable angle, he pushed us away and quickly jumped back in as the current flung us back downstream. Jeff threw in a few strong paddle strokes to get us to the end while we all rearranged and helped with the final “all forward” that beached us. Liz went next and must have taken an uneventful line because I was too busy taking off wet clothes and catching my breath to notice. We ate lunch as we laughed off the adrenaline and looked at pictures of an almost vertical raft. That afternoon and the entire last day was spent navigating sand bars formed of silt build-up from the Glen Canyon Dam.

The river showed us all of its different moods. We had relaxing flat water stretches in the sun, forceful headwinds through canyons, swirling blinding sand, intense rapids, and sneaky sandbars. There were certainly natural challenges (the sand storm and rapids), but the trip also included mental and emotional struggles. The most important part of a challenge is the outcome–how you take this experience and move on. This river trip brought our group together, showed us that we are capable of more than we think, and that when it gets hard the best thing we can do is support each other. We have many memories, riddles, and lots of sand to bring with us as we go back to the front country where we can eat gummy bears.

Hayse ‘22: Lessons from the River

Before this week, my experience on rivers included lounging in a float and sipping a cold lemonade, letting the current gracefully guide me downstream. This is no longer the case. The power of the San Juan River reveals how capable you are, exposes your natural sense of leadership, and teaches you how resilience grows stronger with the support of those around you.

Night two of our seven day expedition tested our group with whipping wind and a sandstorm. During evening meeting, all ten of us huddled together in a tent designed for four and completed my favorite chaos card yet–everyone give one appreciation to each person in the group. After 90 appreciations we wandered back to our tents and woke the next morning to the river guides coaxing us from slumber. With our eyes, ears, and noses filled with sand after waking up in a sandbox, we huddled together like penguins on the beach, anxiously awaiting the day ahead. 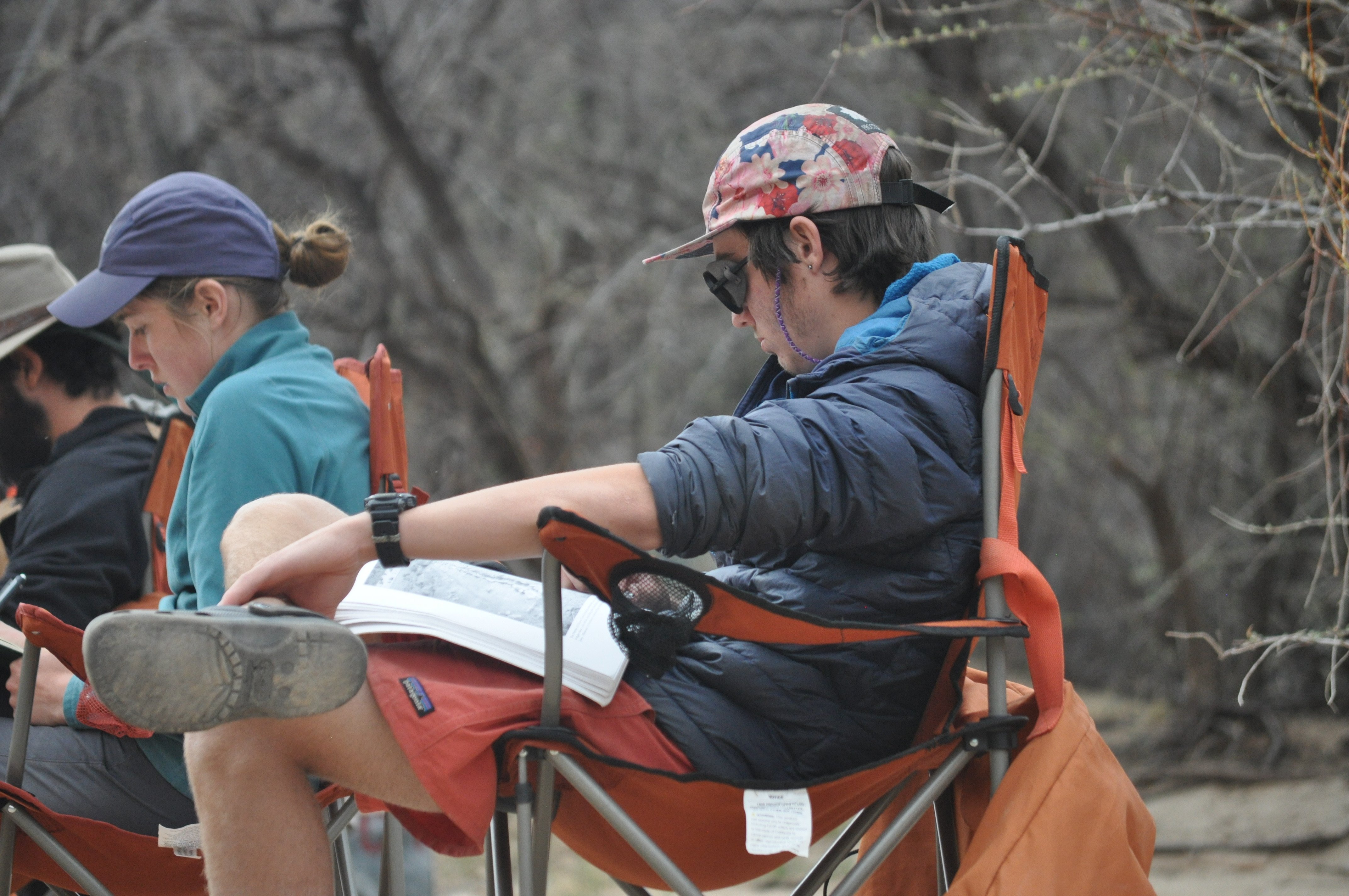 Aboard the Party Boat (a raft with six paddlers and a guide) where the number one rule is “always look good,” flurries of snow and soon, Christmas carols filled the air. We sang and joked and laughed to keep morale up, but eight hours of paddling and togetherness yielded various bumps and rashes, so some self care was definitely in order. 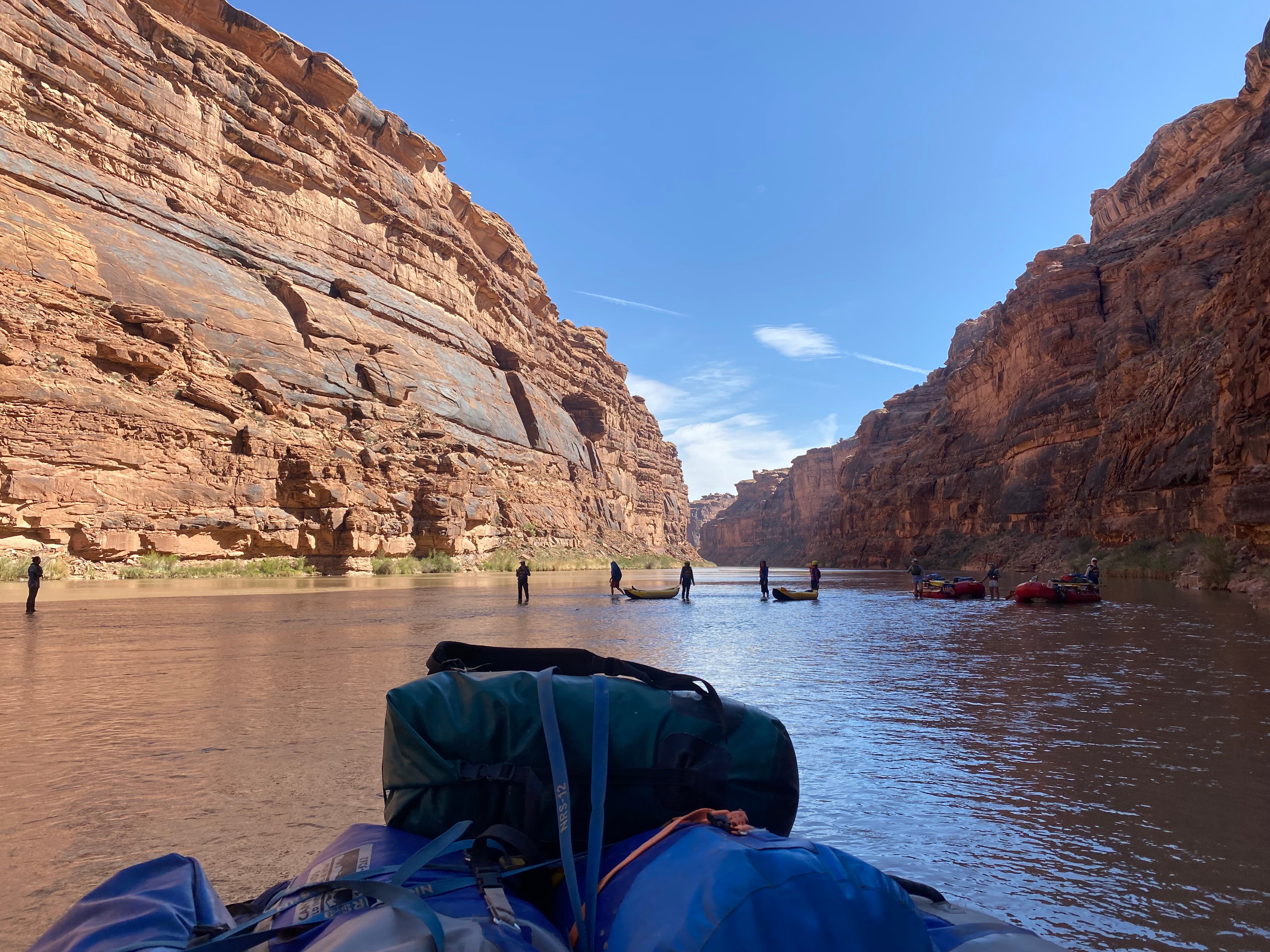 After taking time to reflect and appreciate our experience, Maura and Stewart delivered their land acknowledgements for the rich culture of the Navajo and Hopi people who the land surrounding us belongs to. 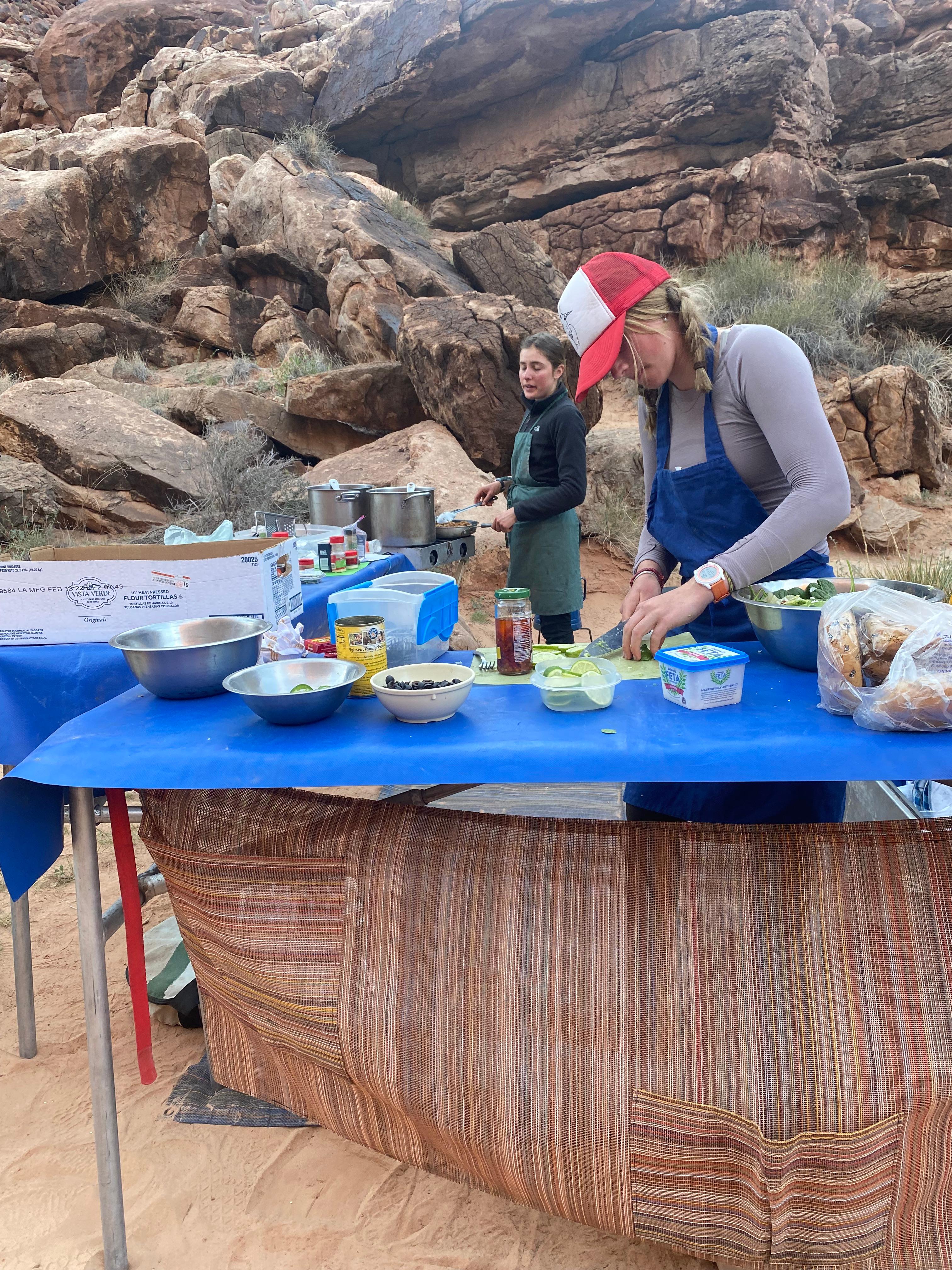 Partway through our river excursion, our group became hungry for a challenge. The river guides graciously offered to teach us how to paddle guide the Party Boat and row the oar rig. Given this new responsibility, it was exciting to watch each other so eager to try something new and steer a 3,000 lb raft through a rapid. For me personally, the thought of shouting commands at my friends in the boat made me slightly uncomfortable. Nevertheless, I propped myself up in the guide’s seat and gave it a try. Scanning into the distance, I learned how to read the water with the help of our guide Lena. I began to develop a new perspective–finding the V-shaped entrance to a ripple or navigating around a rock, but also gaining confidence in my voice as a leader. I realized I could still be a peer-leader and encourager while in a more powerful position. I think the same goes for other people in our group, we discovered how capable we are by asking for more challenges and embracing the responsibility that came with it.

Our final days on the San Juan were filled with more riddles, games of “contact,” riff-offs, and rock gardens and sandbars to test our brains and bodies. We pushed ourselves through the pain of cracked hands, chill-blans, and mental toughness the San Juan required of us. Still with some grit, warm hugs and constant laughter, the Party Boat always looked good.

I’ll walk away from this trip with a new appreciation for the river–for making me take the time to stop and look at a section of the canyon walls, to wonder how its layers formed, to think of the people who belong to this river, to remind myself how fortunate we are all to be experiencing it and growing together.