The adventure of a lifetime continues for Proctor's Mountain Classroom spring group, as the ten students and two instructors explore the American Southwest and begin their journey back to New Hampshire. Asher '19 shares this week's blog post on the group's exploration of Capitol Reef National Park. 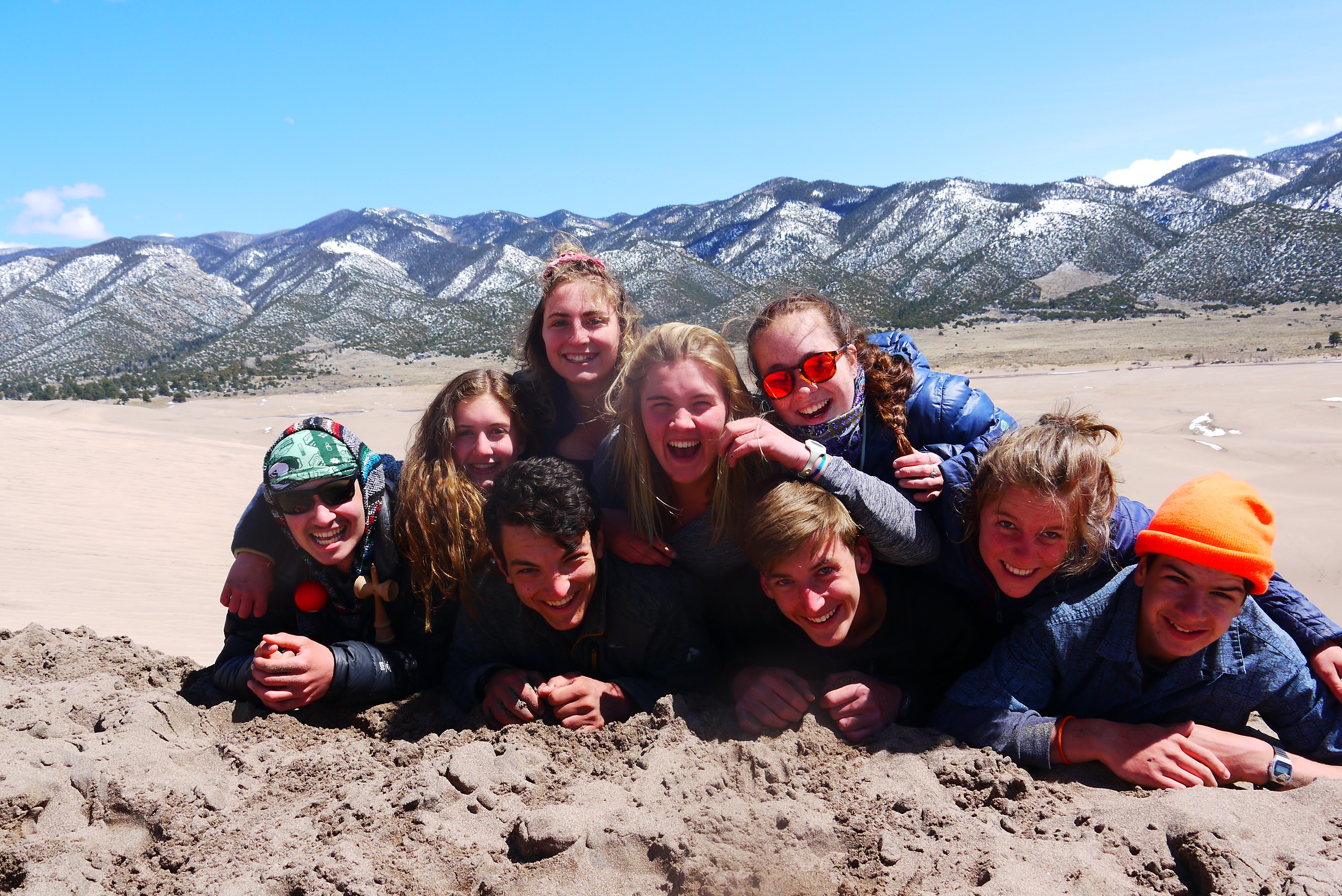 Tight spaces, wet feet, hot desert sun, and snow? We went to capital reef national park to do some canyoneering, and explore some slot canyons in the area. Our original plan on the schedule was to go mountaineering in the henry mountains, however due to a record deep snowpack, and dangerous conditions, we went with the backup plan which was to go canyoneering in the Capital reef national park. Our first day out we hiked up to the top of a canyon outside the park with helmets and harnesses strapped to our bags. We got to the top of the canyon and before continuing down learned some repelling skills, like how to set ourselves up on repel, and how to rescue ourselves if anything were to get stuck in the belay device. 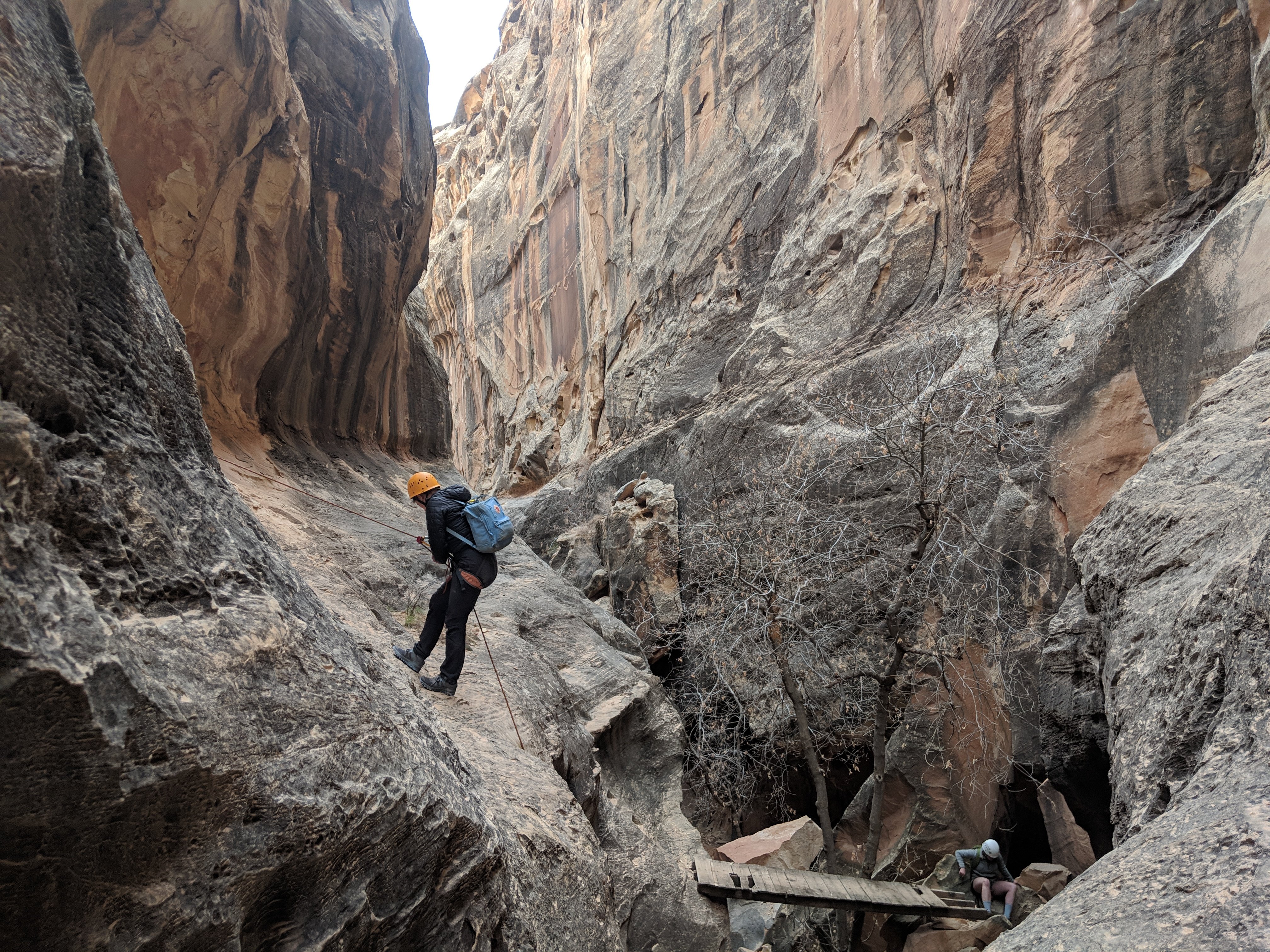 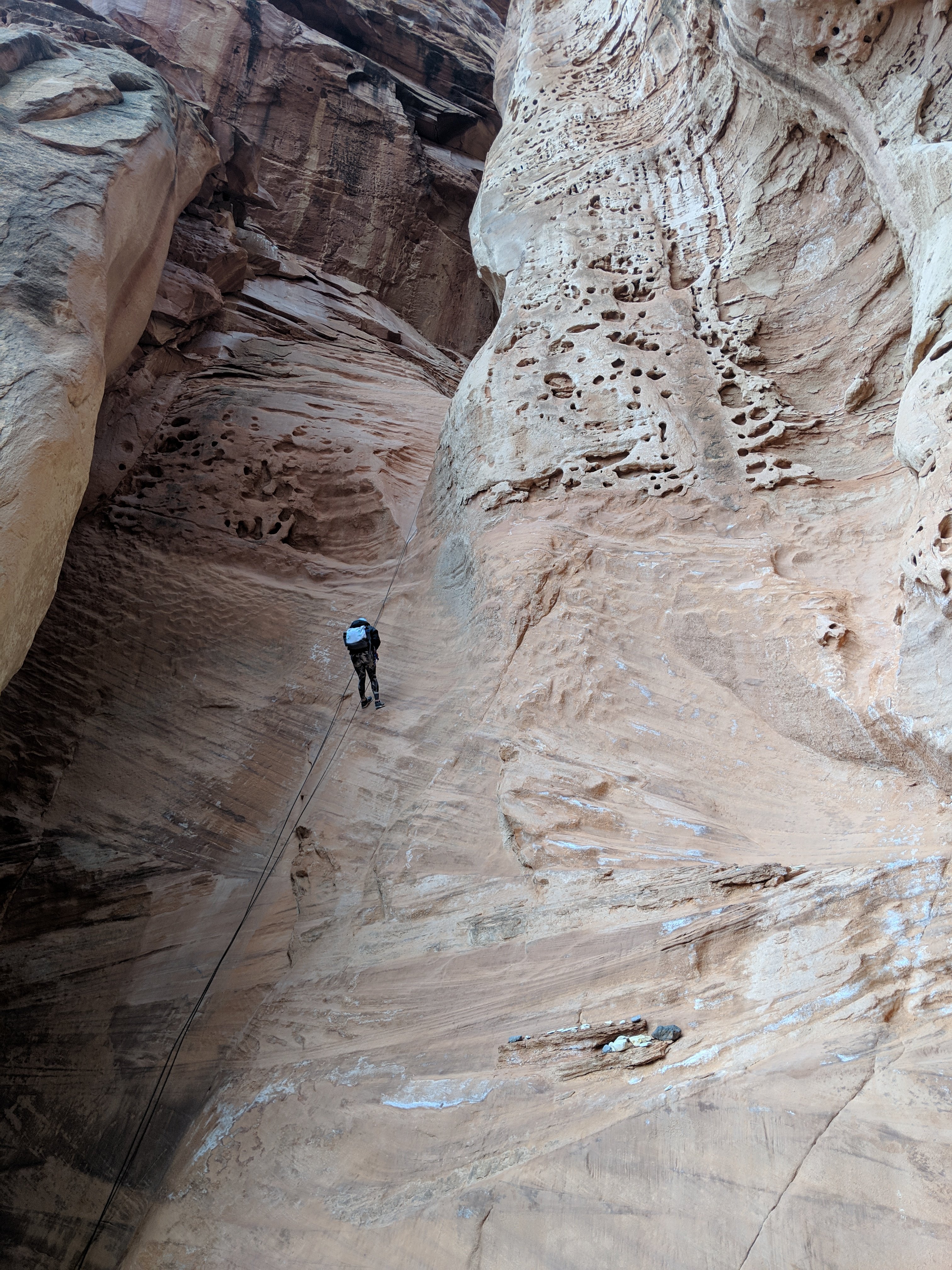 Just as we were about to start our first repel, it started snowing. Even with the inclement weather we headed down the canyon. As we got deeper into the canyon the walls closed in more and more, and at times we had to shimmy through spaces just large enough for a person to fit through. 5 repels and a few miles later the canyon opened up and we were back in the open, walking to our campsite excited for the days to come. On our second day in the canyons we were in Capitol Reef National Park, and things started to get real. Each repel was longer, many of the spaces were tighter, and some of the repels ended in knee deep water. Peering down one of the final repels, it was hard to see how it was a way out. About 20 feet below was a knee deep pool of muddy water in a cave with no obvious exit, but it was the way we needed to go so we blindly continued downward. Once we were in the cave we saw a crack in the wall about 3 feet wide with just a few rays of sunlight shining through, which turned out to be the exit to the cave, and the beginning of the biggest challenge yet. 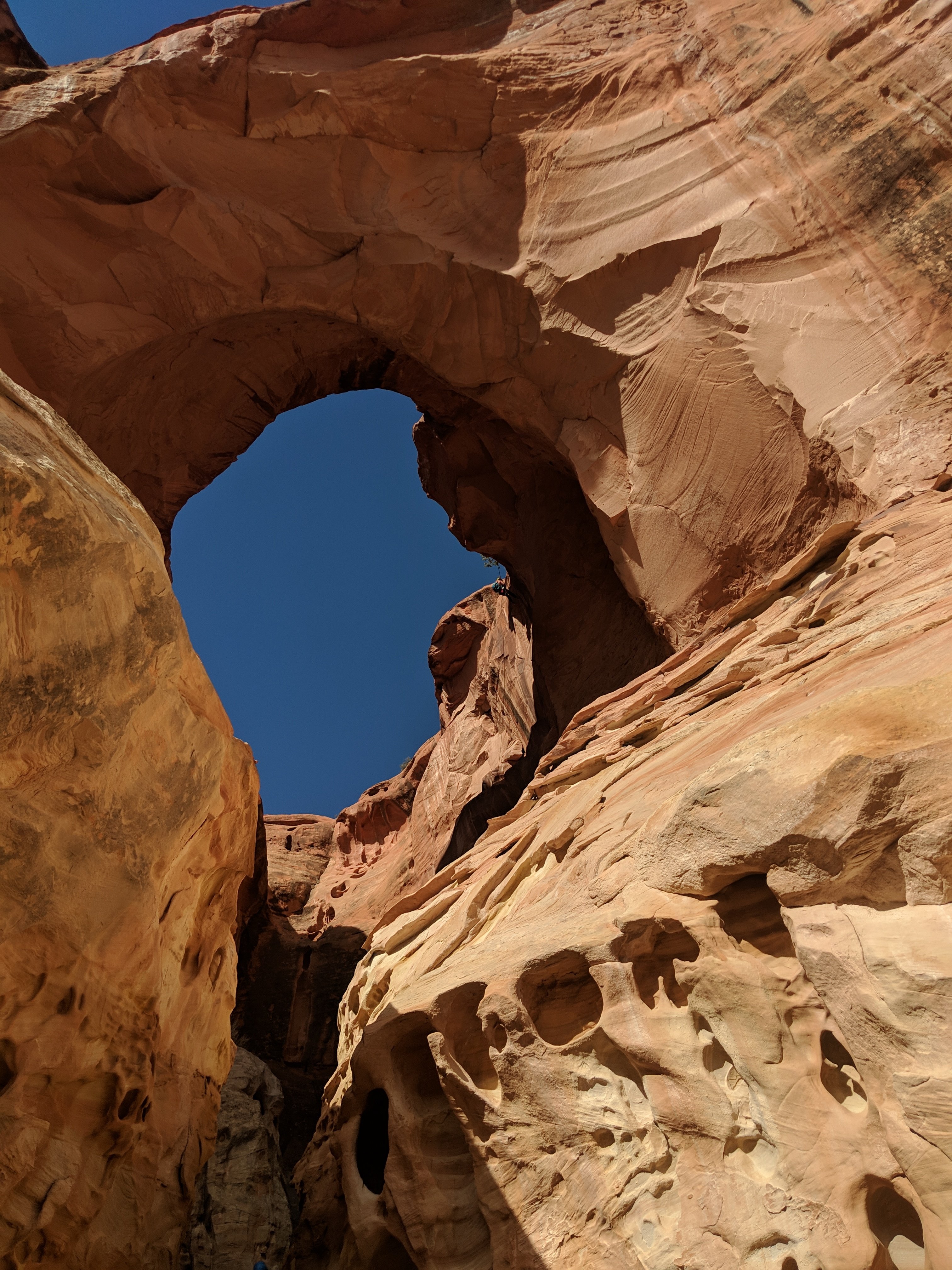 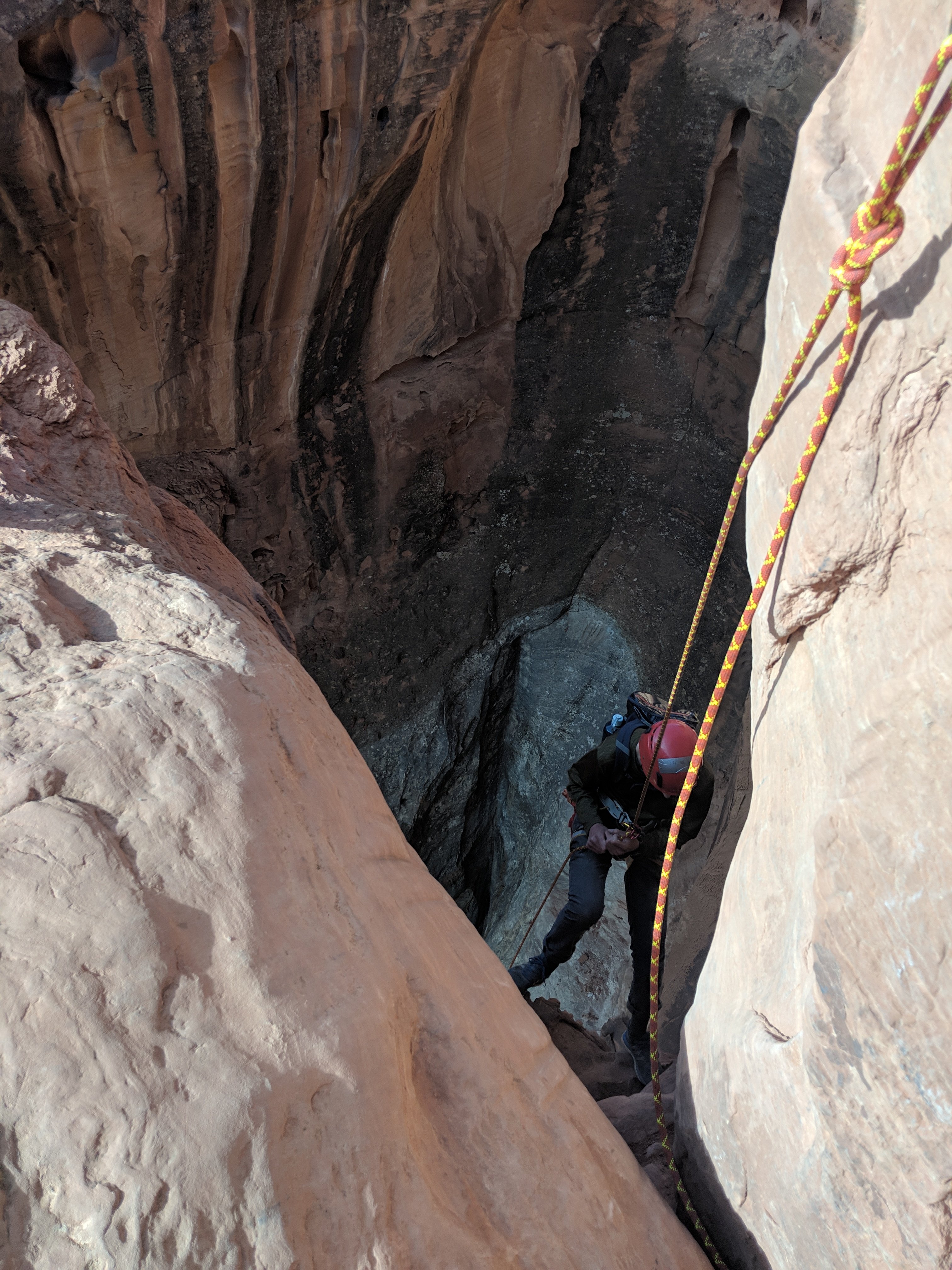 To get to the final repel of the day we half butt-slid, half down climbed down a slab, to the tightest, darkest slot yet. the start of the slot must not have been more than 2 feet wide if that, and as it went down it got slightly wider, but it was still never wider than three and a half feet, and it was awkward in such a way that instead of repelling, we would have to down climb by stemming, or using counter pressure between our legs and backs or hands and feet or whatever would fit to climb the 30 feet to the ground. In order to get out we had to walk through ankle deep mud between two walls which were scraping both sides of my body the entire time. Once we were all through what was one of our most challenging days yet, especially for those who were uncomfortable in tight spaces, we welcomed our 5 mile hike back to the bus, where many people upon seeing the bus, rushed inside and immediately fell asleep after a long day of hiking and repelling. The next day was more tight, dark, damp spaces and this time we did two really long free hanging repels down under an arch and into some really awesome caves that were really quite breathtaking. 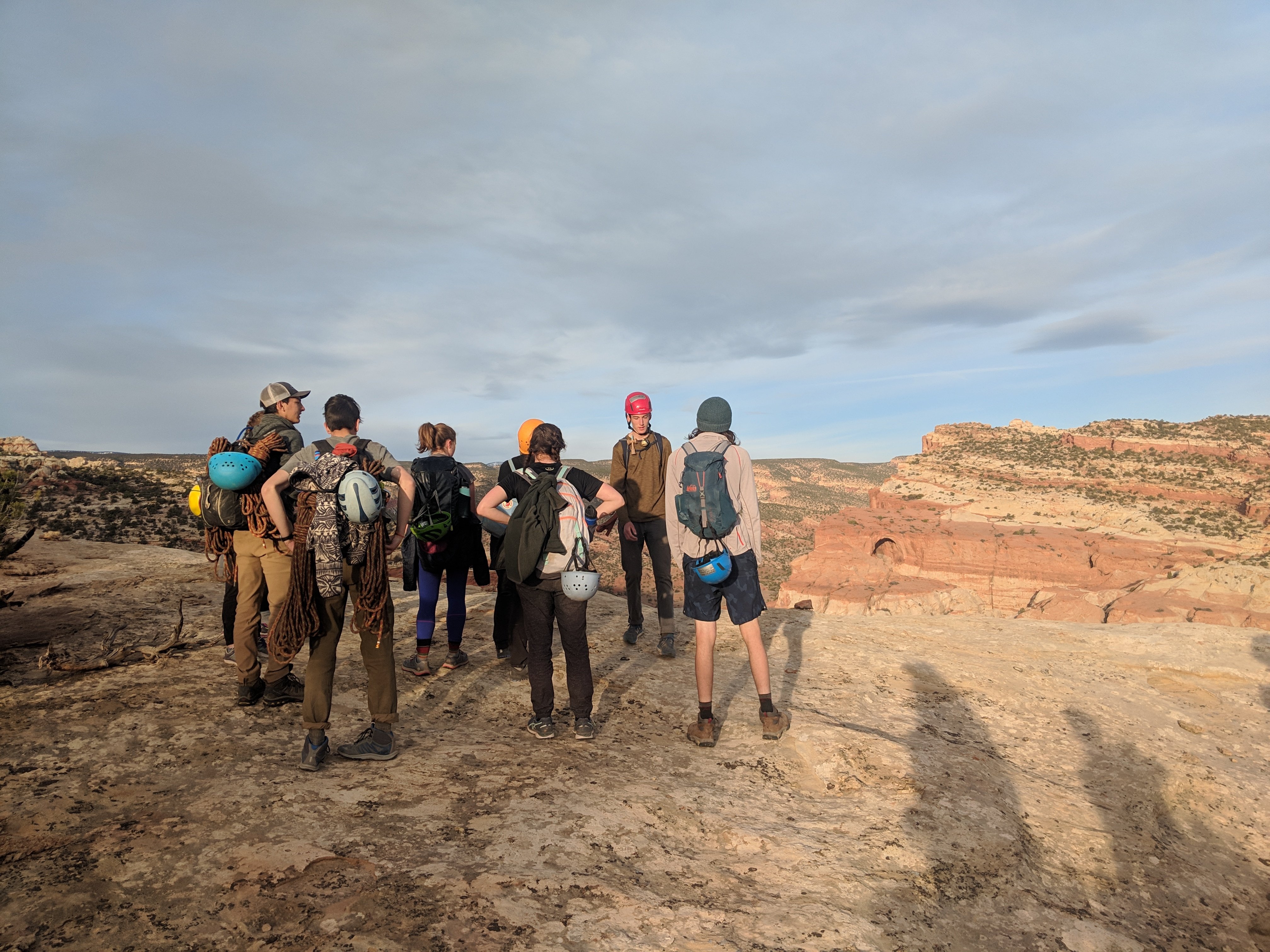 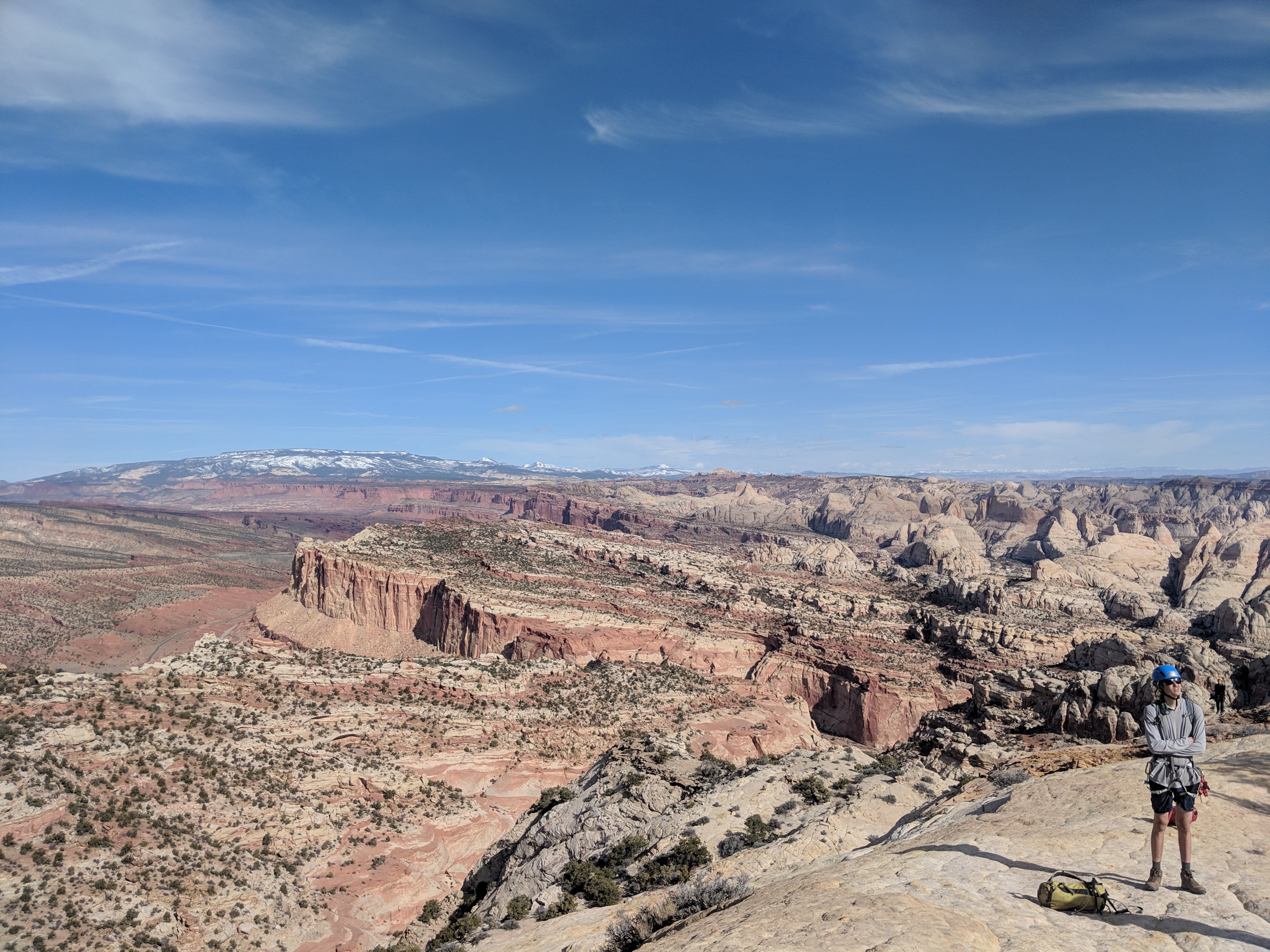 On our final day in Capitol Reef, we went up a formation called Ferns Nipple, which is a huge formation of sandstone stretching into the sky, with 360 degree views stretching for miles. This was the biggest day of the capitol reef trip so we had to wake up early, really early. After a 4:40 wake up we got rolling, ate breakfast, drove to the trail and started hiking, we were on the trail at 6:30 we were able to do the hike up to the top much faster than expected and once we got towards the top, the terrain turned to something steep and was so exposed that we had to rope up for the last bit of the climb. From the top, the views were breathtaking, and well worth the early wakeup. On to Moab for our next adventures. 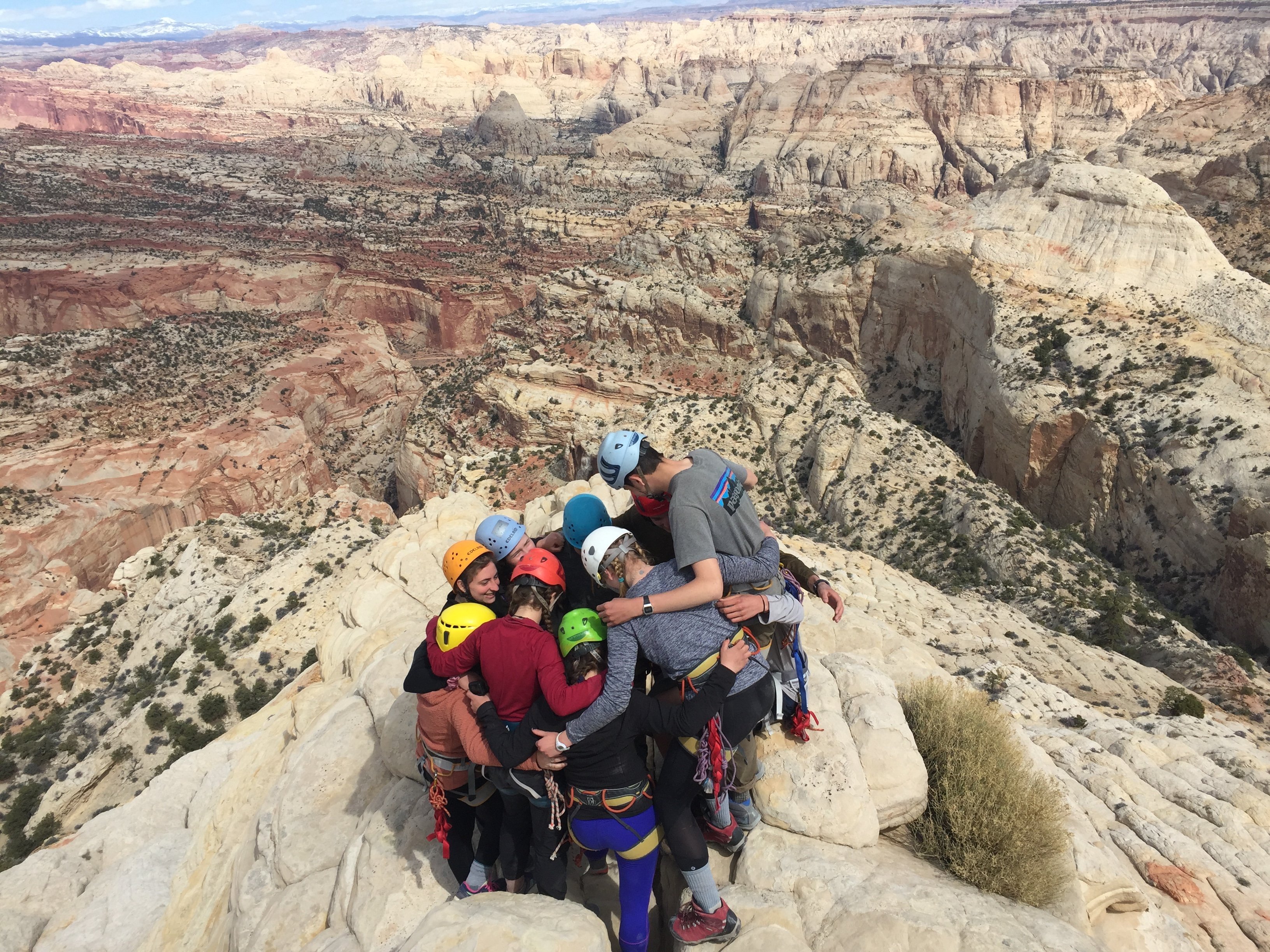