Proctor Academy's Mountain Classroom program continues their immersion learning experience this winter. After a climbing excursion in Hueco Tanks State Park, the group prepares for Adjunct Weekend and visiting faculty Patty Pond and Kyle Connolly. Read reflections from the past week by Grace '23 and Ani '23 below!

One part of Mountain Classroom that everyone had been looking forward to (or dreading) is rock climbing. While in Hueco Tanks State Park we finally got our first taste of climbing. Our guides, Mary and Billy, lead us on a long but worthy walk to our first four bouldering spots. 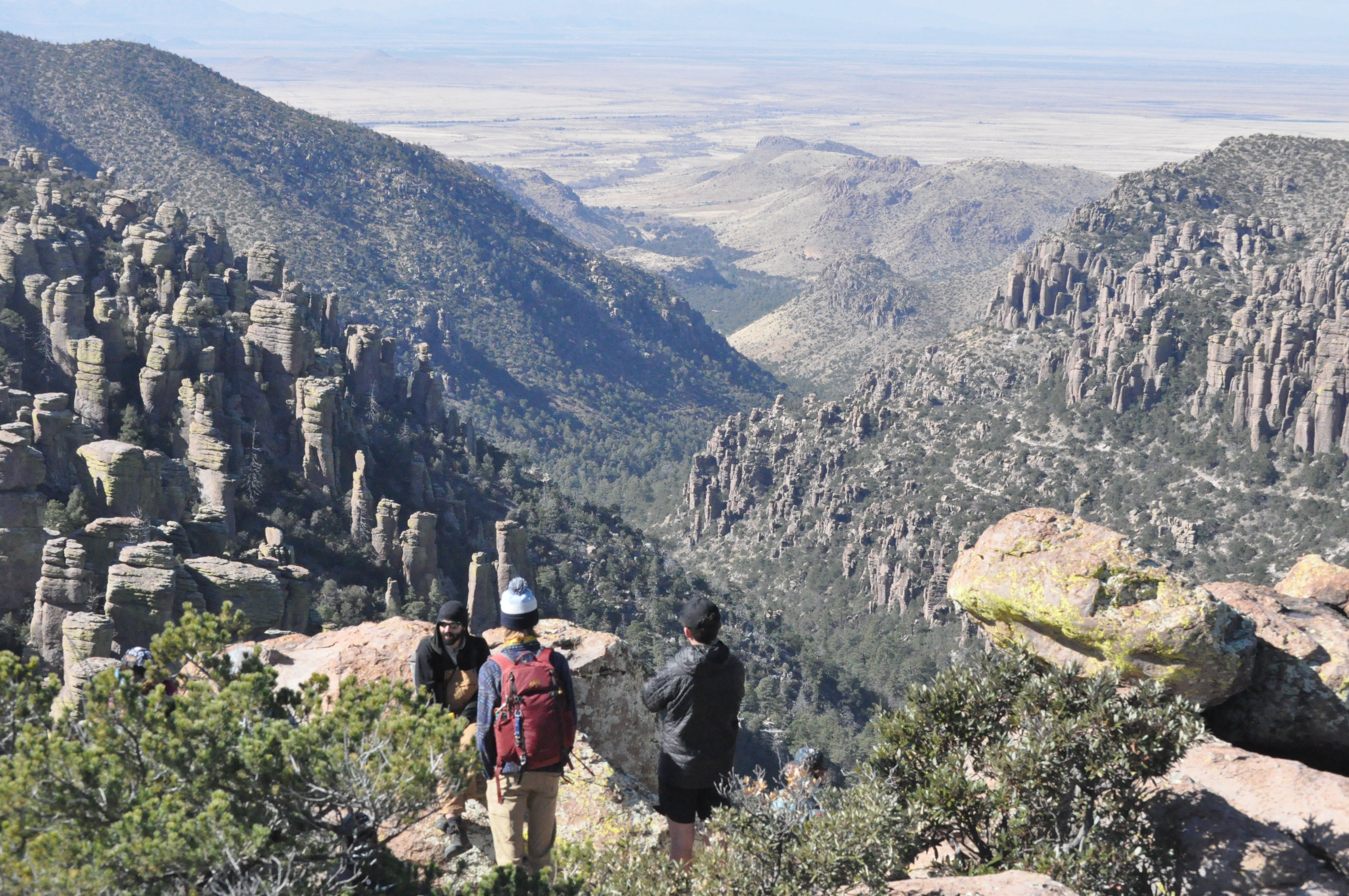 Bouldering is a type of rock climbing where the climber does not use ropes, but instead has mats underneath them and does not climb above ten to fifteen feet. After a quick how-to tutorial, we were all eager to get to climbing. We quickly realized that this would not be as easy as Mary had made it look. Most of us struggled with using muscles we never knew we had and struggled with the mental challenge of being in the air with no rope. We stayed in small groups and rotated through the different routes. The frequently used holds were dusted with the white chalk making it easier to visualize the next moves. Nothing beats the feeling of making it to the top of the rock. 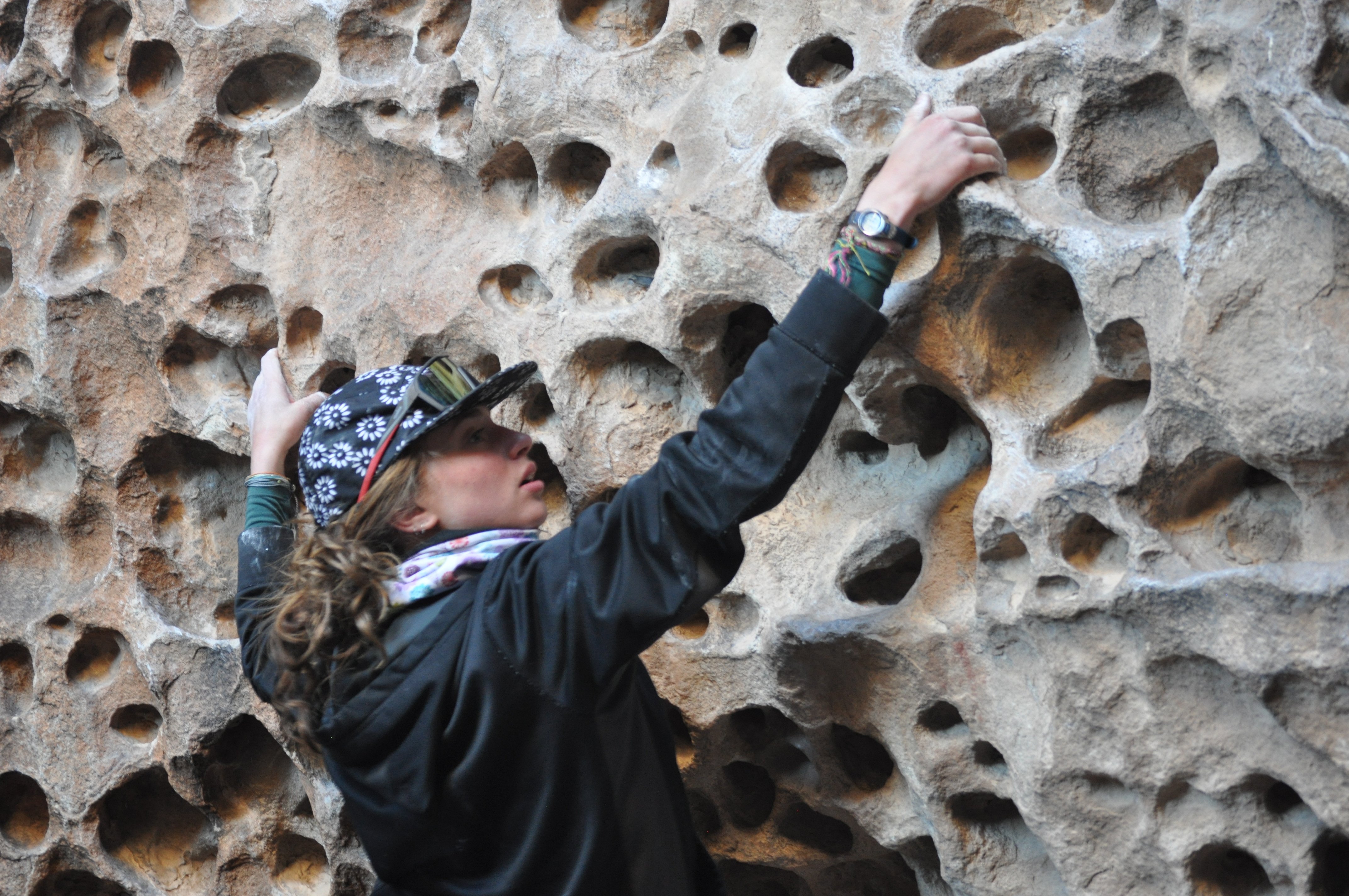 Seeing the gorgeous surrounding rock piles from a different perspective was a highlight of that day. After a good amount of time spent at the first area, we packed up everything to leave for the second spot. One by one, we walked down a narrow path looking like rectangular video game characters with mats bigger than us on our backs.

Our hike up to our next spot was treacherous. We had to climb up some slick rocks with our balance thrown off by the mats and heavy backpacks. It was well worth the hike when we saw where we would be climbing. We slipped through a small crack and into a gorgeous circular cave. The walls were covered in small huecos and there was a golden light peering through the cracks. We settled into the cave and quickly ate lunch, eager to begin climbing again. Bouldering was much easier in this cave but muscle fatigue became an issue. 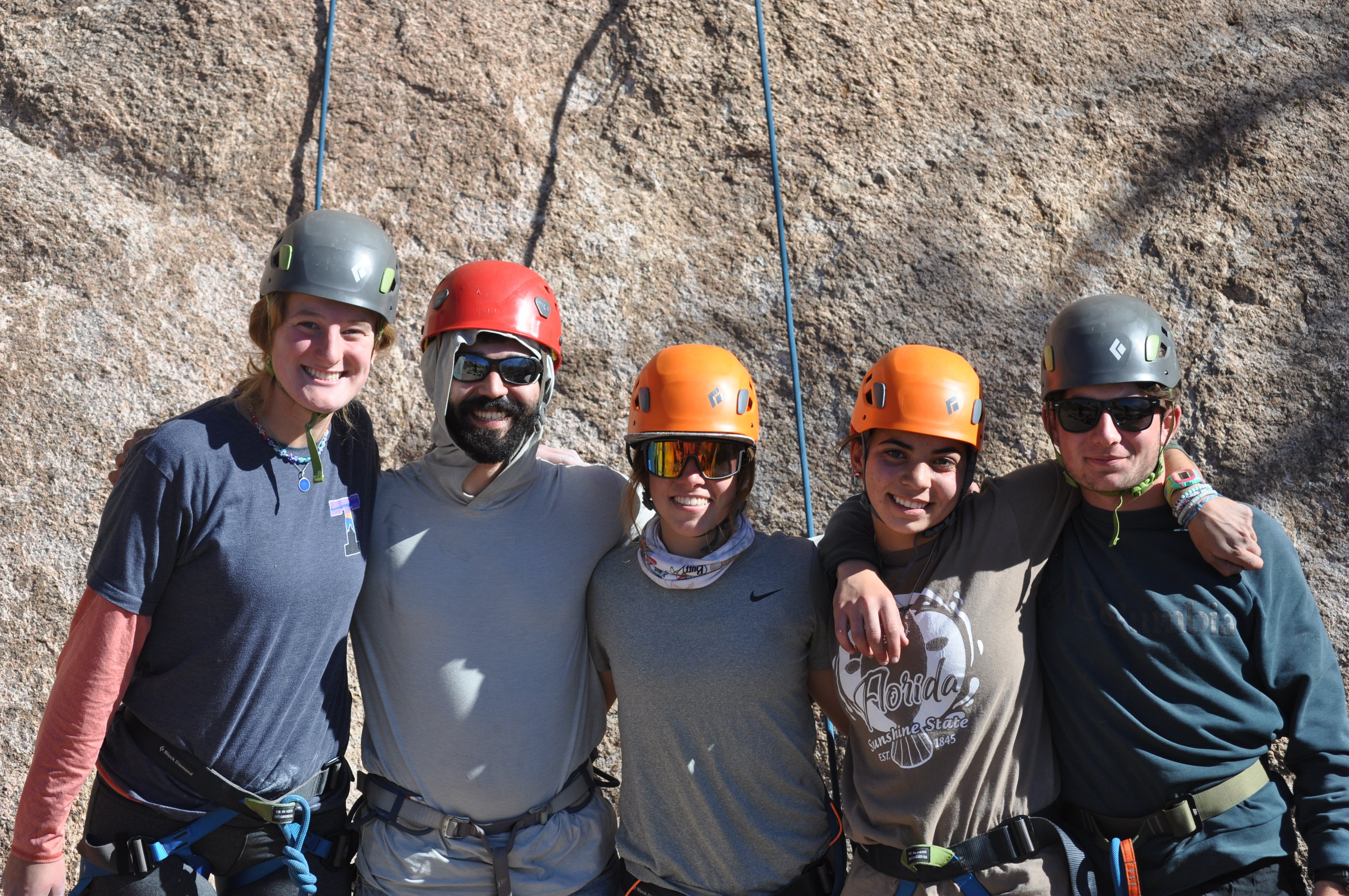 For two-ish hours we climbed around in circles attempting to beat our personal records. Many of us became so absorbed in climbing that we forgot we were only a couple of feet in the air. When we slipped we saw our lives flash before our eyes even though nothing would happen. That evening we returned to camp with sore muscles, scratched up hands, and excitement for our next opportunity to climb. 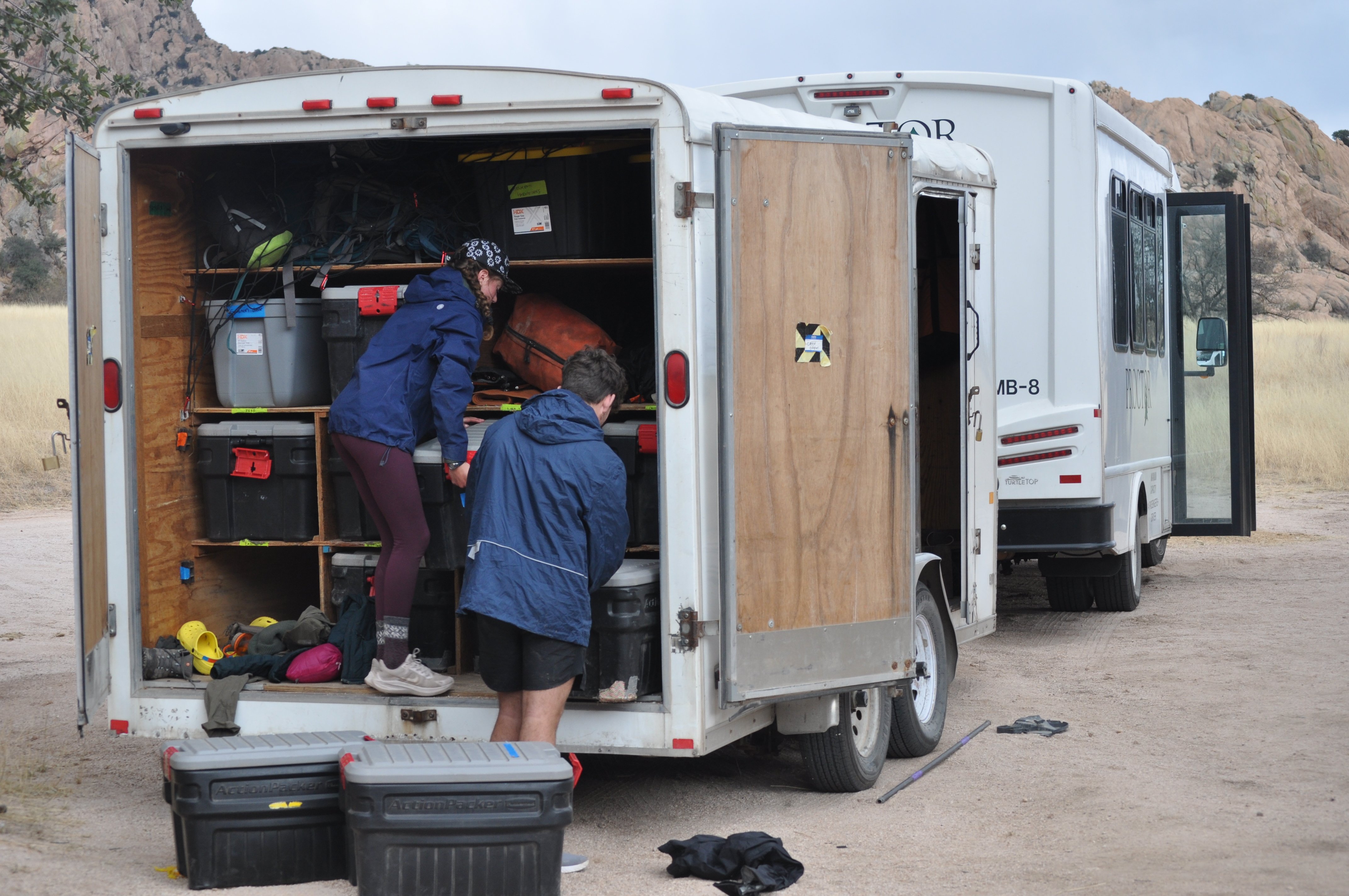 My face is pressed to the glass of the bus window. I read THE THING. THE THING. THE  THING. I see billboard after billboard on this THING. Now you may be wondering what the Thing is and I am here to tell you that I am wondering the same thing. I pondered on what exactly these billboards were advertising. Dinosaurs? A water park? Various wild ideas swirled in my brain. I have had plenty of time to think about these many billboards. There are at least ten, one after another on I-10 from New Mexico to Arizona. This is just one of the many things that grabbed my attention on this particular drive. 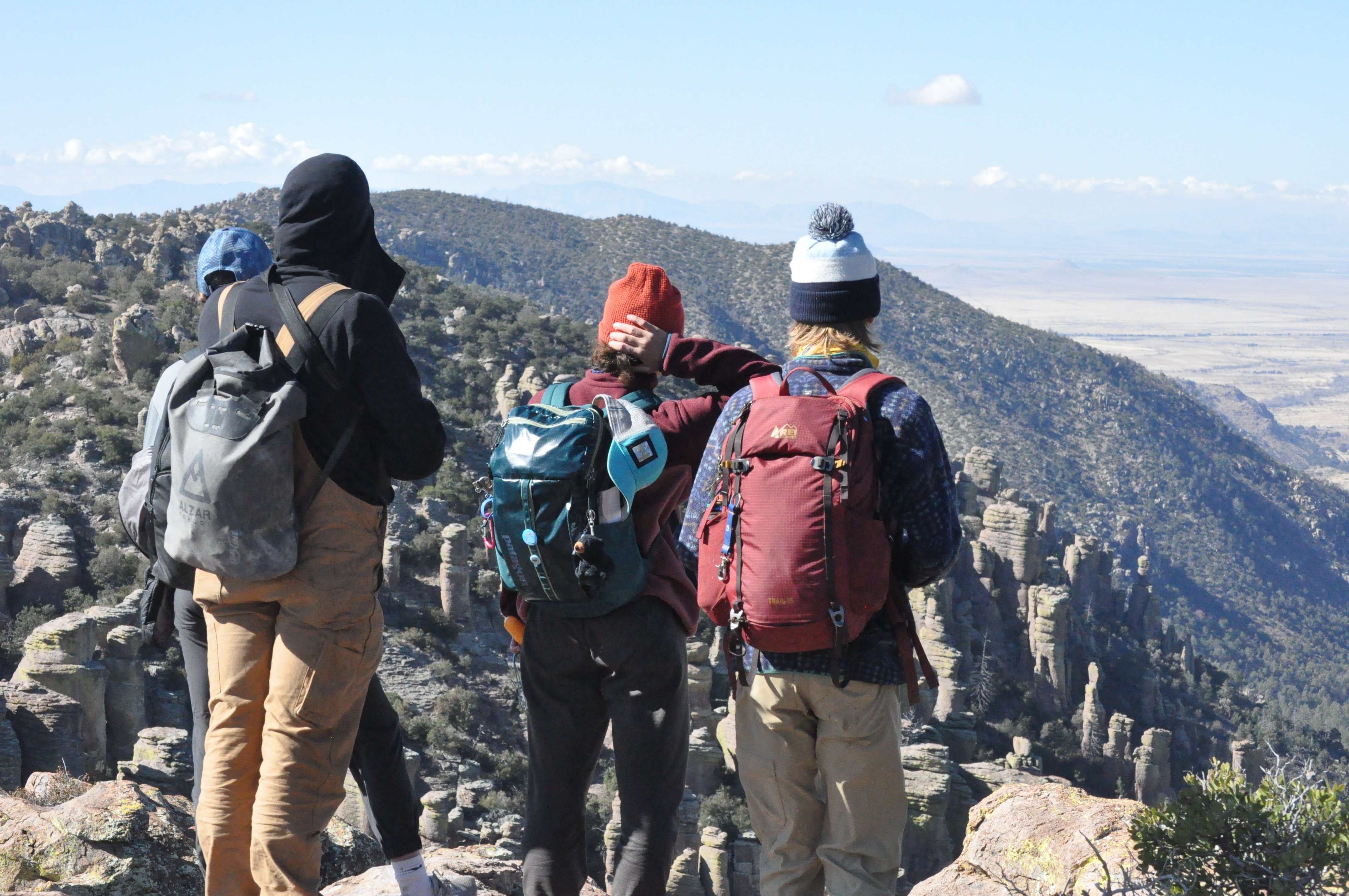 Joy is not usually someone’s reaction when they find out they will be sitting in a car or even a bus for 4-7 hours. Personally, when I learn I will be sitting in the car for a large amount of time I am faced with absolute misery. Not anymore. The announcement of a drive makes me and many others in our group tingle with excitement. 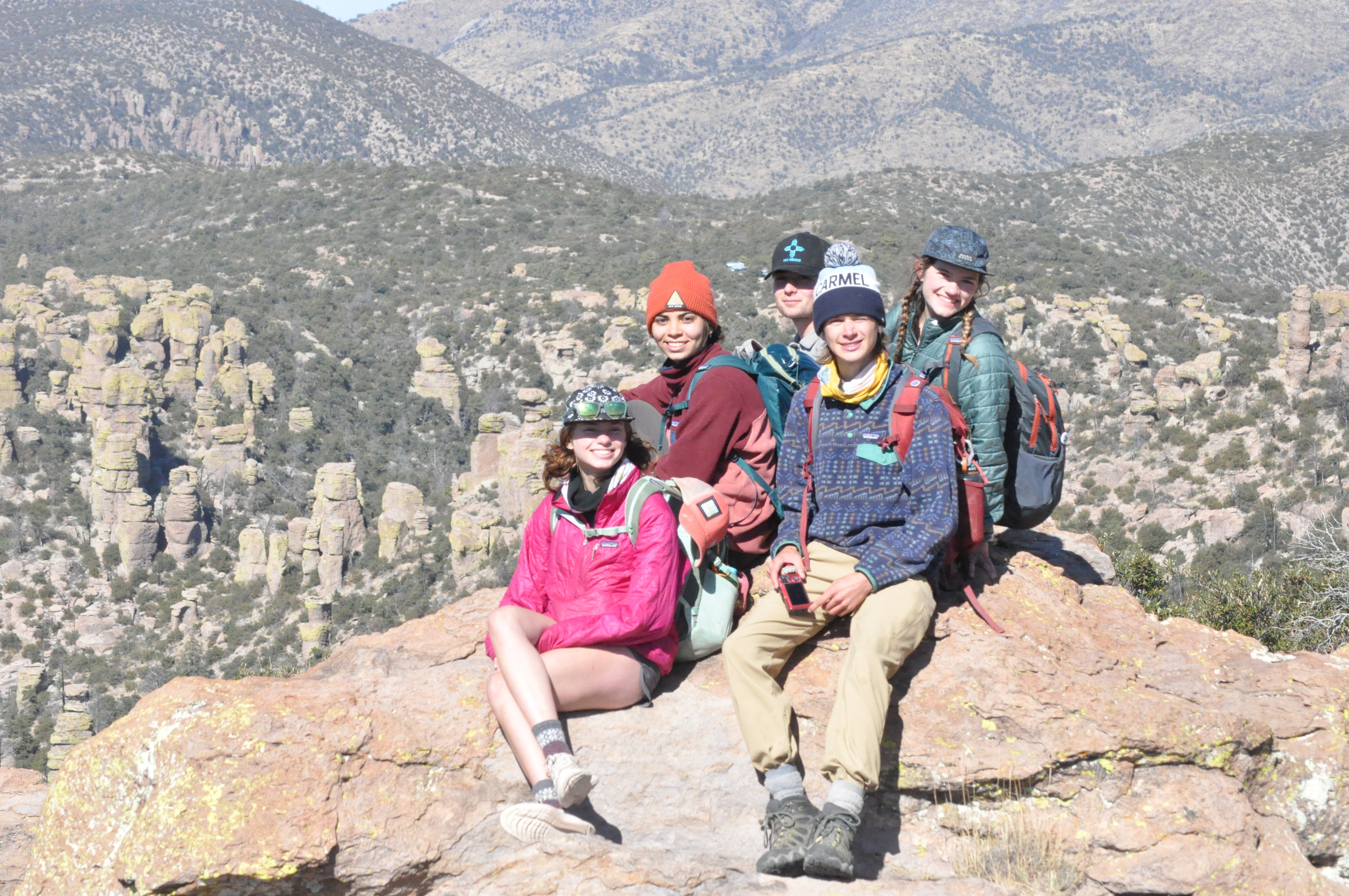 On this particular day we woke up in Hueco Tanks. We all packed up Deb and prepared for a grocery shop and a long drive. Personally, I am not the type to sit and just stare out of the window. On most bus rides I fill my time by journaling, reading my book, or interrogating the person next to me. Today, for some reason my eyes were glued to the window. I helped Grace search for license plates, helping her slowly make progress on finding all 50 states. Then my eyes shifted. I could see for miles. I was abruptly brought out of my trance because a pungent smell had taken over the bus. It wasn’t our farts this time. It was a cow. I look to the other side of the bus. Thousands upon thousands of cows all squished into a square patch of dirt. A feedlot. I had only ever heard about them in AP Environmental Science. That was my first impression of New Mexico. Everyone stopped what they were doing and stared. Then the cow fart smell faded.

I saw houses that looked so tiny out in the distance. The tiny houses morphed into a vast landscape of nothingness. Or so it seemed. I began to study the land more closely. The desert is not just flatness, cacti, and dirt. There are also surprisingly big mountains. Naked mountains. Maybe not even mountains but huge rocks! Ginormous rocks even. Mesmerized, I watched these rocks grow, shrink, and collapse in the distance. I eventually get bored of the various forms of rocks and look at the billboards again. They are all quite unique; the people who make these need a raise. Each billboard tries to convince me I need a lawyer, my car fixed, to buy some sort of tree nut, indulge in some beef jerky, or even see this THING. Then I gazed further into the desert and mountains on the horizon returned and so did the music. Never a dull moment on ye old Deb.

P.S. I saw my first tumbleweed