Mountain Classroom: Group Dynamics and Climbing Toward the End

As the Spring Term winds to a close, Proctor Academy's Mountain Classroom program winds its way east through Wyoming, Montana, and South Dakota. At this point in the journey, students are running the majority of daily operations for the group. In the journal entries below, Gunnar '22 and Romy '23 reflect on how their group has evolved during their seven weeks together.  During the final two and a half weeks of the program, the group will continue their journey east immersing themselves in place-based learning along the way.

In the blazing heat of Central Arizona I descended into a beautiful valley with a small creek. About to rock climb for the first time in my life, I didn’t know what to expect. We looked on as Jeff and Carol set up the climbs. They explained safety measures and showed us the ropes (literally). We tied ourselves in and started climbing with a simple friction-dependent belay device operated by a primary belayer and a backup in-case anything happened to the primary. Little did I realize the higher I climbed the more faith I was putting in my belay team who now had my life in their hands. 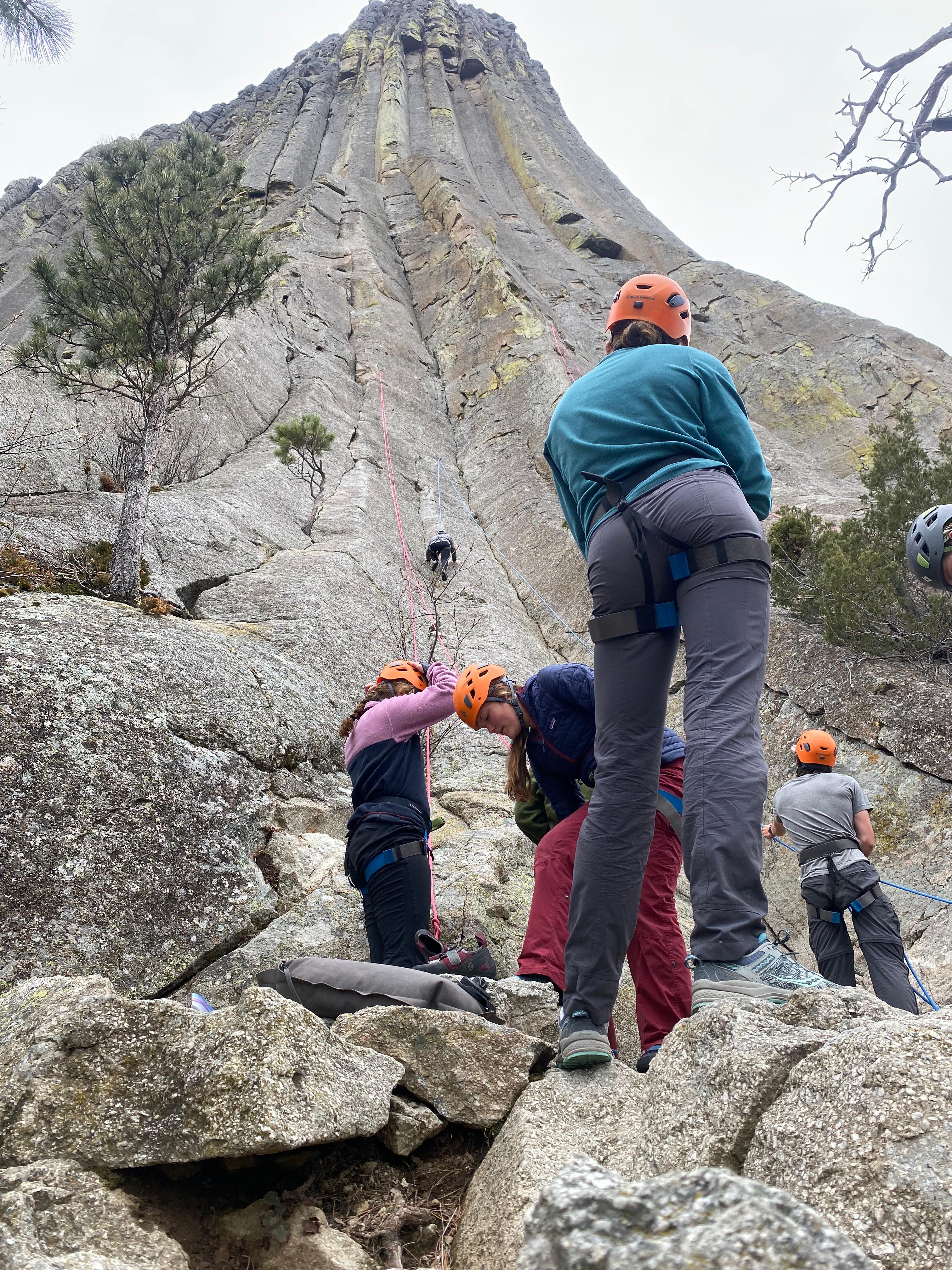 At the top all I could think about was the view, only until later on did I think about the problem I just solved and how the trust I had in my belayer would inevitably bring us closer as a group. I loved my first day of climbing but I came away wishing there was a bigger challenge posed by the routes. Regardless, I was hooked. Between the cool carabiners and gear, along with the scenic views from the top, I wanted more. That day on I would consistently barrage Jeff and Carol with climbing questions. I loved the gear because it was practical and only as complex as it needed to be. There’s nothing like good engineering.

I’ve always had an engineering focused mindset with my passion for problem solving and understanding the workings of complex machines. This is why climbing is so fun for me–it's all problem solving. You can look at a route and try to find the best way to the top by taking in all the different inputs: the available holds, how steep it is, what type of rock it is, how tired you are, do you want to add more nuances like specific climbing techniques, how tired you are. It gets really complicated. To complicate things even more, you’ll often reach a spot that looks entirely different than it did from the ground where you have to abandon the game plan and go through the same process to determine which awkward, outstretched position you can put your body in next. Then you look down and realize you are tens or hundreds of feet off the ground. 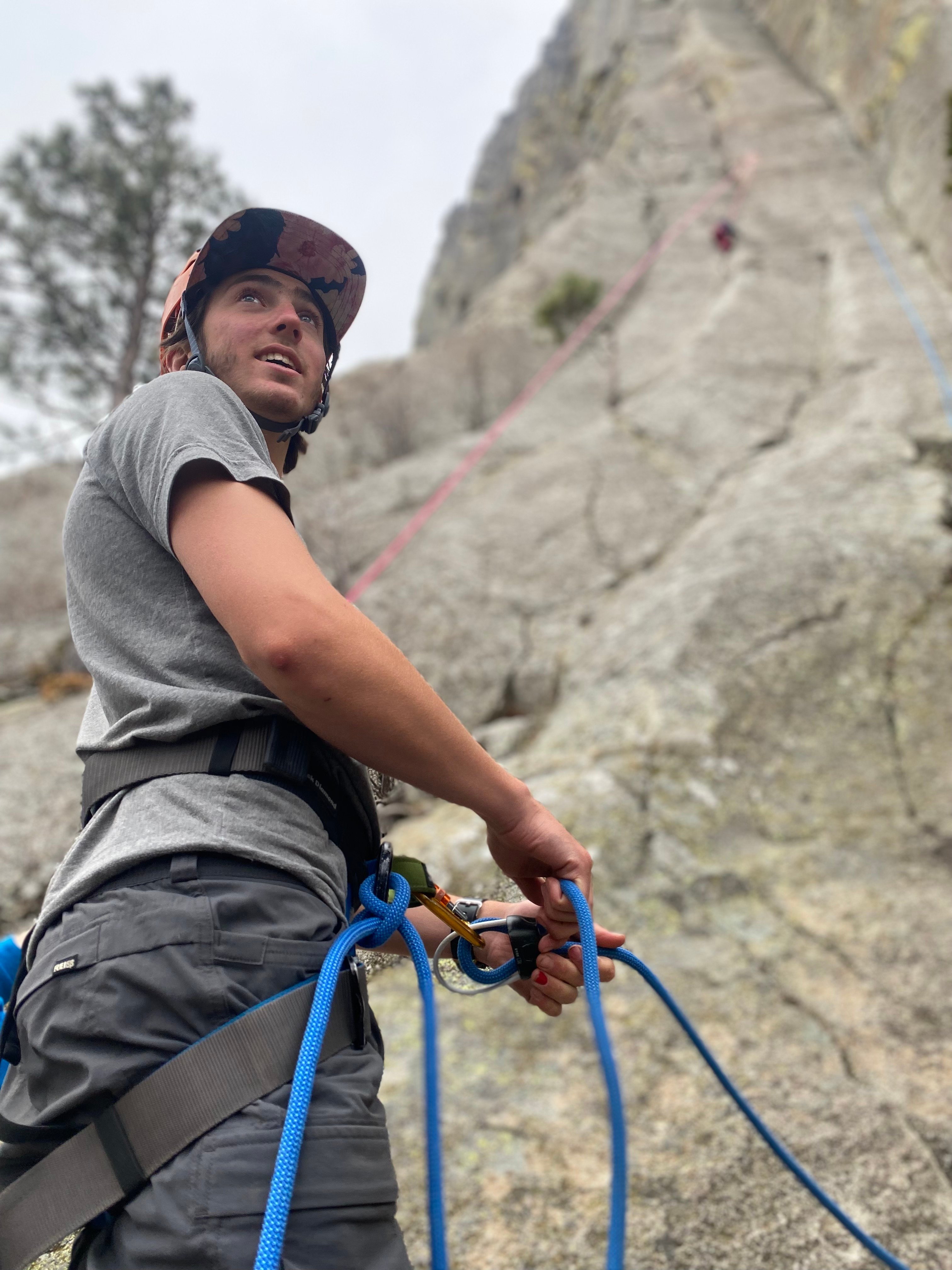 My favorite part about climbing is that no climb is the same, what you’ve learned on previous climbs may hinder you on the next. Climbing technique is like a bottomless toolbox that keeps filling with new tools, sometimes you’ll need a wrench and other times you’ll need a hammer with a screwdriver on one side and a measuring tape on the other. It’s never the exact same and often combines many things you’ve learned, complicating the problem to solve. The various and seemingly infinite techniques at your disposal creates a whole problem of its own to choose the best one for the situation.

Our last climbing stop was Devils Tower in Wyoming, a volcanic structure best described as monolithic. During the cooling process the rare volcanic rock of the tower cracked into huge 5 & 6 sided columns that make for world class climbing of all types and difficulties. I conquered the first 3 climbs that were set up. Then I saw the guides set up a 240 ft climb. I knew I had to climb it. Being the highest climb I’ve ever seen I knew it would be a marathon, not a sprint to the top. I methodically worked my way up the wall face through varying types of small and near non-existent holds. Nearing the top I reached a true crux move where I fell and dangled from the rope. I had to ask myself: “What went wrong?”, “How can I do this better next time?”, “What do I have to work with that I previously missed?”, after a couple of tries I solved it and climbed on, pushing the limit of my abilities with each new move. To reach the top I had to climb a right-facing crack meaning the left side stuck out farther making it only accessible from the right side. Being a wide crack I had to stick my whole hand and sometimes forearm in to get my hand to a spot where I could pull the tip of my thumb to the tip of my pinky, a severely uncomfortably move but it gives the purchase necessary to get up the crack. The nature of the crack only allows one foot to get purchase while the other foot pushes off the wall, helping my hands stay wedged. This means that to advance my bottom foot, all of my body weight was being supported by my wedged hands. Making it up the crack and to the top of the climb I was ecstatic. The view of the area was truly amazing and it felt even better because I had earned it.

I had a blast pushing the limits of my body and my trust while climbing on Mountain Classroom and I will surely be returning to many of these spots as well as new spots all over the world.

One thing that I’ve really noticed after living with only nine other people for so long is the sense of community that is being built–a sense of comfort, derived from each other and our norms. These norms generally include how we set up our camp, how we delegate chores, inside jokes, etc… There are a few times within the past few weeks that this has been most apparent to me.

To start chronologically, the San Juan river trip was probably the first time that this sense of normalcy was upset. Our adventure on the San Juan River brought the introduction of four river guides. There was some introduction of our norms to the guides, such as circling up before meals, and some of their norms were introduced to us, things like how camp was set up. Though by the end of the trip we had reached a new norm of sorts, our ‘reunion’, 7 days later in Moab after saying goodbye to our guides, was one filled with moments of bonding, laughter, and the conscious (or unconscious) realization that we had come to a point where we found comfort within each other. Our sarcasm, tent groups, sharing gummy bears, classes and the feeling of independence from planning our own days brought us a feeling of normalcy and simplistic joy.

Our next change occurred not much afterwards–Adjunct Weekend, in Colorado. Adjunct Weekend, being our equivalent of Spring Family Weekend, gave our instructors, Carol and Jeffrey, time to themselves and their families. The weekend also gave us a chance to chill at a camp for a while and call our families. With the absence of our instructors, came the introduction of Sarah and Kayden, who flew into Grand Junction to spend the weekend with us. Their presence, although perhaps a bit more familiar than the river guides, also led to a subtle change within our typical group dynamic. Though the weekend was fun and relaxing, there was a feeling of normalcy upon the bus ride out of Colorado, when Carol and Jeffrey returned. This weekend was the beginning of a realization that our bond as a group was growing, and elicited some thinking time from me, as we drove up to Wyoming.

There are other moments too, I’m sure, of when our sense of community has felt strong - late night talks before going to bed, long drives on Deb (the bus), sharing books, even though to me, that moment of reunion is always the most apparent. I mentioned once to the group how I enjoyed the challenge of many things like climbing because they are just different forms of puzzle solving, something that I personally enjoy. Throughout my experience, I’ve found that I can’t really compare friendships and group dynamics to that of puzzle solving–the human brain and its feelings are much too complex to be considered as such. For this reason, I was nervous going into this program about the group dynamics and my place within it, and have found myself grateful of the way that this challenge is working itself out. As we all find our place within this group, and we grow more comfortable with each other, the more grateful I am that I’d decided to not look at this issue as a puzzle, because even as we all fit into it, we don’t have a final picture. We have been growing as a group, and as we continue to grow, our ‘final picture’ will also change and evolve.

I am certain that as time passes, our sense of community and the comfort we derive from each other everyday will only grow.